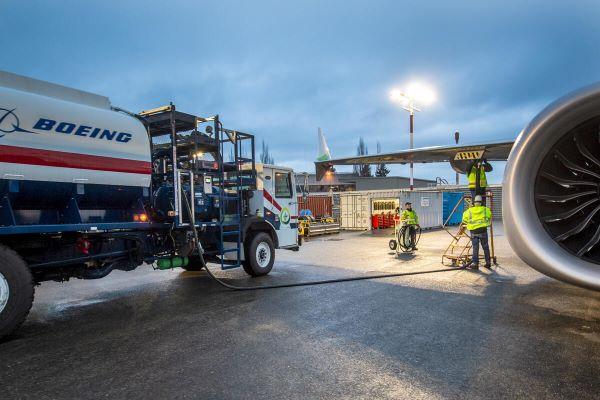 Boeing has agreed to buy two million gallons (7.5 million liters) of blended sustainable aviation fuel (SAF) with EPIC Fuels to power its Commercial Airplanes operations in Washington state and South Carolina through 2022. The purchase agreement includes an SAF product made from inedible agricultural waste, blending 30% neat SAF with 70% conventional jet fuel. The purchase will enable broader use of SAF for Boeing commercial production, test, ferry, Dreamlifter and customer flights at facilities in Everett, Renton and Seattle in Washington state and North Charleston, South Carolina. EPIC Fuels will also continue to supply customized blends from 50/50% up to 100% SAF for the Boeing ecoDemonstrator program. 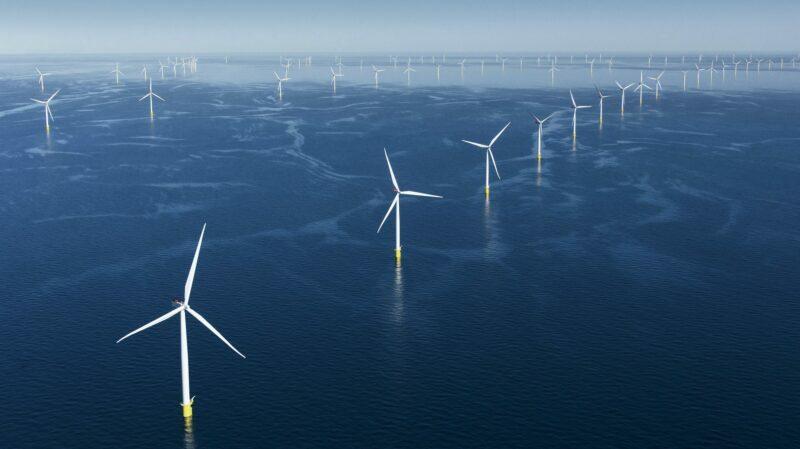 A Danish project to produce sustainable aviation fuels (SAFs) from renewable energy is investigating whether it can begin jet fuel production in 2025, two years earlier than planned after Denmark’s Prime Minister in January set the goal of all domestic aviation being fossil-free by 2030. The partners in the project are calling on the Danish government to establish a framework for financial support that would offset the higher cost of sustainable kerosene compared with fossil jet fuel, particularly early in production when the synthetic fuel will be most expensive. The Green Fuels for Denmark consortium plans to build one of the world’s largest electrolyzer facilities to produce hydrogen using renewable electricity from an offshore wind energy hub to be constructed off the island of Bornholm in the Baltic Sea. 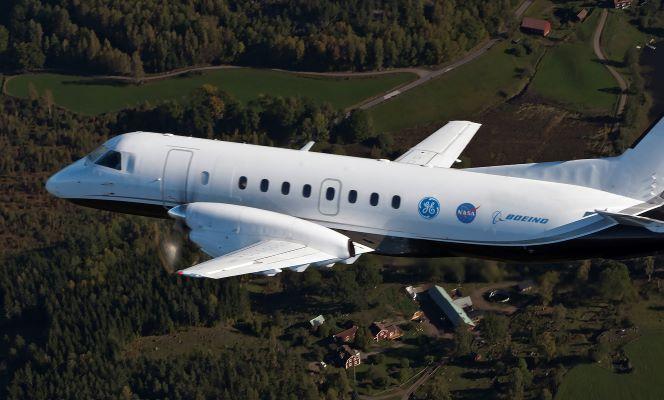 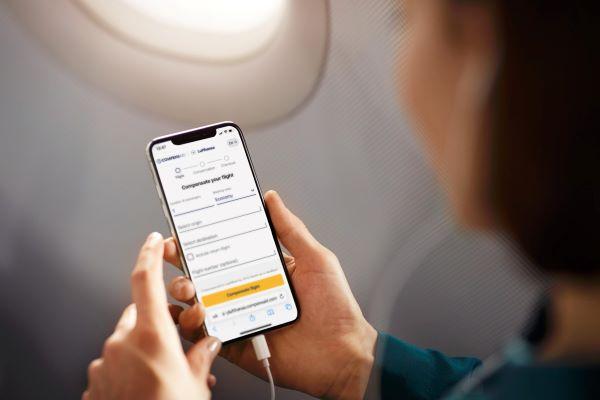 Brazilian startup Desaer has partnered with electric propulsion developer MagniX to develop a hybrid-electric version of its planned ATL-100 regional utility transport. Development of the hybrid ATL-100H is to follow that of the baseline twin-turboprop ATL-100, which was launched in 2020 with plans to enter the market in 2026. The ATL-100 is designed to replace existing 19-seat utility aircraft such as the Embraer EMB-110 Bandeirante and De Havilland Canada DHC-6 Twin Otter. Founded in 2017, Desaer is also planning to develop a follow-on pressurized 40-seat regional turboprop, the ATL-300. 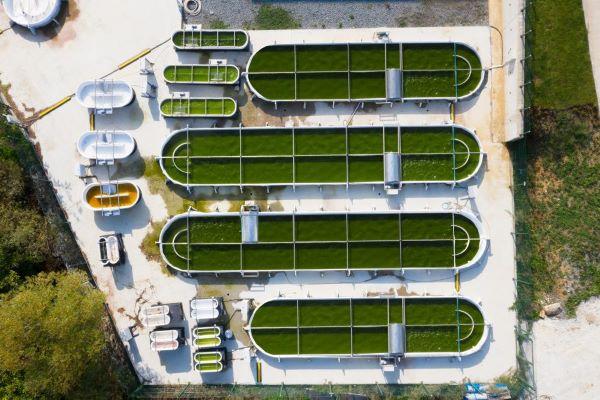 Istanbul’s Bogazici University has inaugurated what is claimed to be Turkey’s, and Europe’s, first carbon-negative biorefinery, designed to produce a range of algae-based biotech products including sustainable aviation fuel. Officially opened in early January, the facility has produced its first batch of jet fuel. The work has been carried out in cooperation with Turkish Airlines and Tubitak, the scientific and technological research council of Turkey. Turkish Airlines plans to use the fuel in a demonstration flight by the mid-year. 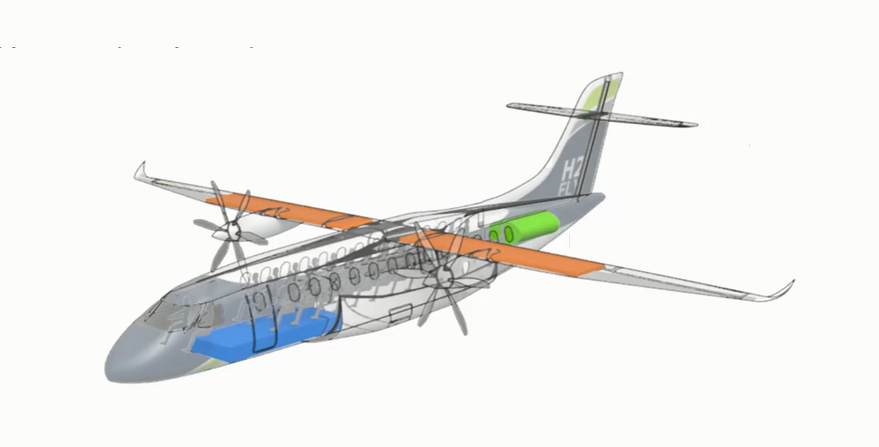 Working with Deutsche Aircraft, Germany’s H2Fly is planning to fly a hydrogen version of the Dornier 328, a 40-seat Do 328 regional aircraft, modified to hydrogen-electric propulsion in 2026. The companies are aiming for certification and market entry in 2028. 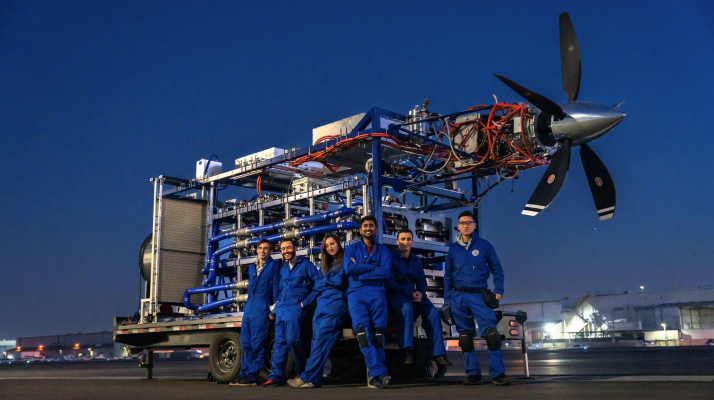 Universal Hydrogen completed a 1-megawatt iron bird for ground testing of its zero-emissions fuel-cell propulsion system and announced the first customer in France for its regional aircraft conversion. Paris-based regional airline Amelia, which is operated by Regourd Aviation, signed a letter of intent for three ATR 72-600 conversion kits. Amelia operates on behalf of Air France, as well as flying its own routes, and is the first French customer to sign up since Universal Hydrogen (UH2) established its first European engineering center in Toulouse in September 2021. 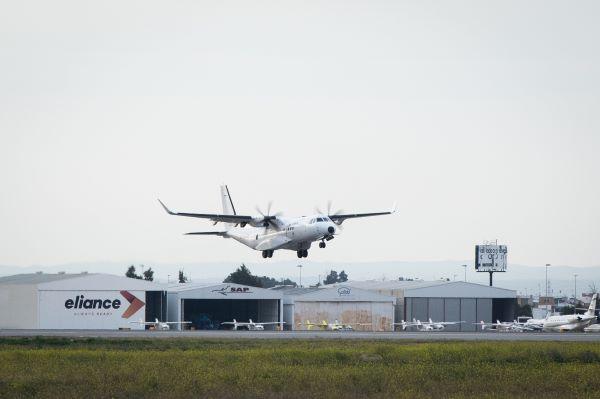 A technology demonstrator based on the Airbus C295 military transport and aimed at regional aviation sustainability has made its first flight in Seville, Spain. One of two flying test beds (FTB) in the Regional Aircraft program that is part of the European Clean Sky 2 aeronautical research public-private partnership, FTB2 features a semi-morphing wing, digital flight control system and a satellite communications antenna embedded in the fuselage. Airbus describes the aircraft as assessing technologies for “future regional multi-mission aircraft.” In a typical search-and-rescue mission of 400 nm, CO2 emissions would be cut by up to 43%, NOx emissions by 70% and takeoff noise by 45%. Search-and-rescue missions typically include a loiter phase at low speed. 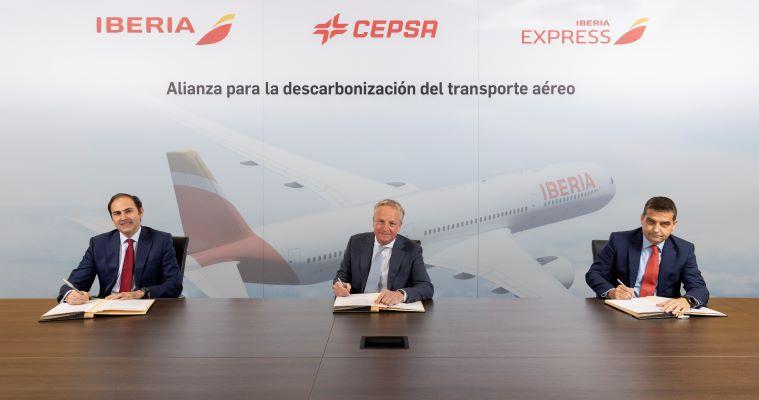 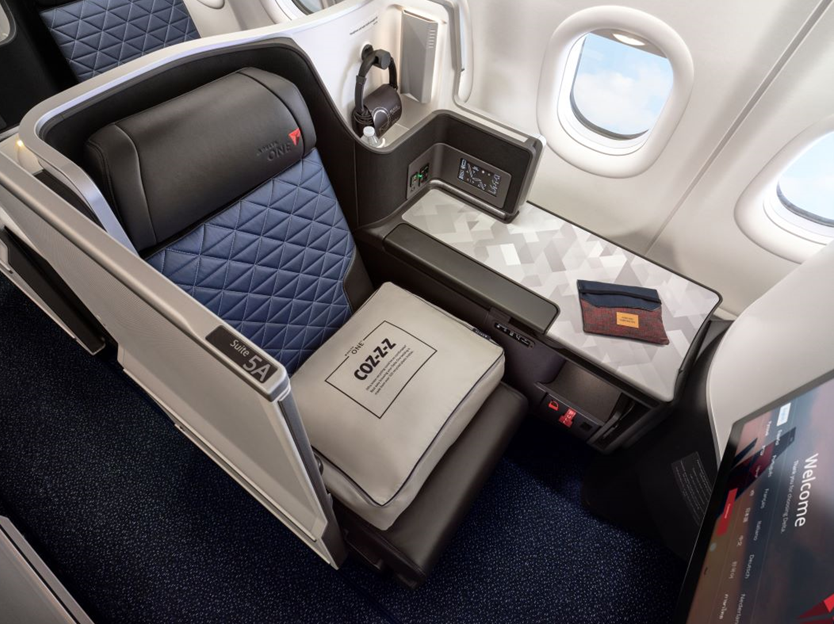 Delta Air Lines is refreshing its onboard product offerings with artisan-made amenity kits, recycled bedding, reusable and biodegradable service ware and premium canned wine. Together, the products will reduce onboard single-use plastic consumption by approximately 4.9 million pounds per year. New amenity kits by Someone Somewhere—available in the Delta One cabin—eliminates five single-use plastic items such as zippers and packaging, reducing plastic use by up to 90,000 pounds on an annual basis. Delta’s premium bedding sets are now made with more than 100 recycled plastic bottles, which will use 25 million recycled bottles annually. Delta also offers bamboo cutlery for domestic first class fresh packaged meals and on select international flights. Later this year, all international main cabin customers will also see new dishware made from biodegradable material, bamboo cutlery and a premium paper placemat.

All Nippon Airways (ANA) has extended its SAF Flight Initiative to also include business travel from participating corporate partners. Launched in October 2021, this program aims to expand SAF utilization and reduce emissions related to business travel, engaging companies as well as customers across a growing range of industries. Initially only available for the cargo sector, ANA has expanded this program to corporate customers as they work to reduce CO2 emissions. Participating companies that enroll in the SAF Flight Initiative will receive certification noting the reduction in carbon emissions.

Two early-stage startups have joined forces to lay the foundations for an on-demand regional air service in Western Australia using small electric aircraft. Perth-based FlyOnE signed an MOU with Electron Aerospace of the Netherlands to secure early production slots for 28 Electron 5 five-seat electric regional aircraft. FlyOnE intends to use the aircraft on its Lilypad Elevate network, which is planned to connect 25 regional airports in Western Australia, providing more than 30 point-to-point connections. The startup is the distributor for Pipistrel’s electric aircraft in Western Australia and operates a flight training school, FlyOnE Skycademy, using Pipistrel’s Alpha Electro electric trainer. FlyOnE plans to launch its regional service using this two-seat aircraft. Electron 5 deliveries are expected to begin in 2026.

More SAF plants to come in US, Middle East

More sustainable aviation fuel (SAF) production plans are being announced in the US and Middle East. In Abu Dhabi, renewable energy company Masdar has signed a collaboration agreement with France’s TotalEnergies and Germany’s Siemens Energy to codevelop a project focused on using green hydrogen to produce SAF. The project involves building a demonstrator plant at Masdar City in Abu Dhabi. Masdar is cooperating with Etihad Airways and Lufthansa Group on the demonstrator plant, along with the Abu Dhabi Department of Energy, Khalifa University of Science and Technology, and Japan’s Marubeni. Front-end engineering design of the plant is planned to begin this year. In the US, Indaba Renewable Fuels has selected Haldor Topsoe’s HydroFlex technology for two greenfield SAF refineries it plans to build in California and Missouri. Expected to begin production in 2024, each plant will have a capacity of 6,500 barrels (273,000 gal) a day. 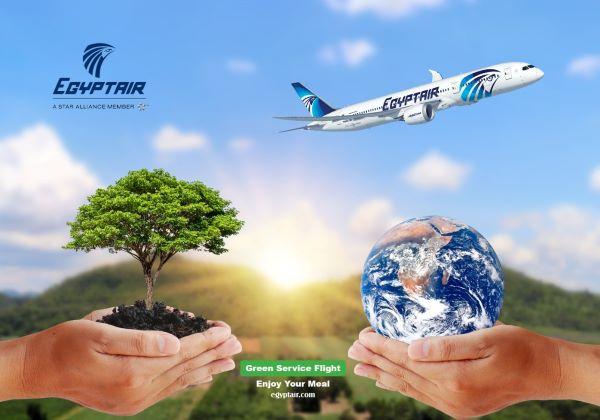 EgyptAir operated its first environment-friendly service flight in Africa on Jan. 22, offering a 40% discount on the eco-friendly flight between Cairo and Paris. A special flight logo “Green Service Flight” was placed on all products and materials used during this flight, representing the airline’s vision toward a more sustainable future. In the future, EgyptAir said it aims to reduce consumption of single-use plastic on its flights by 90%. It will replace 27 products made of single-use plastic on its aircraft with environment-friendly products. 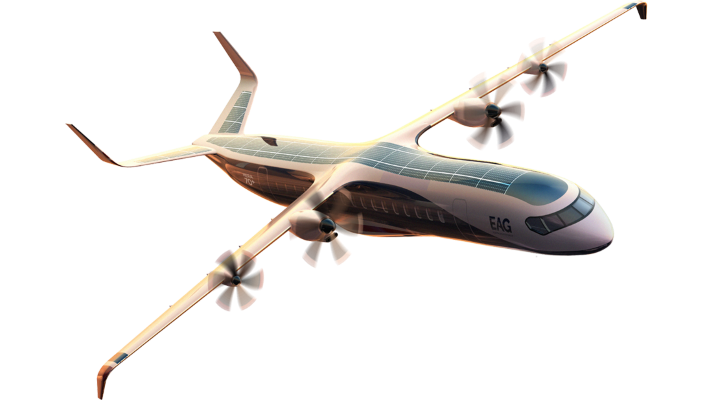 UK startup Electric Aviation Group (EAG) created another spinoff to develop megawatt-scale fuel-cell systems for aerospace and non-aerospace applications, continuing its strategy of building out the enabling technologies for its planned zero-emissions 90-seat hydrogen hybrid-electric regional airliner, the H2ERA. EAG will provide the new company with its patent portfolio and access to its aircraft program, while the co-founders will provide subject matter expertise in the hydrogen sector. Current large fuel-cell systems generate around 250 kW. The startup’s initial focus will be on development of a 2-megawatt hydrogen fuel-cell propulsion system for the proposed H2ERA. The university collaborations are intended to support the startup’s plans to develop the 90-seat regional aircraft for entry into service by 2030. 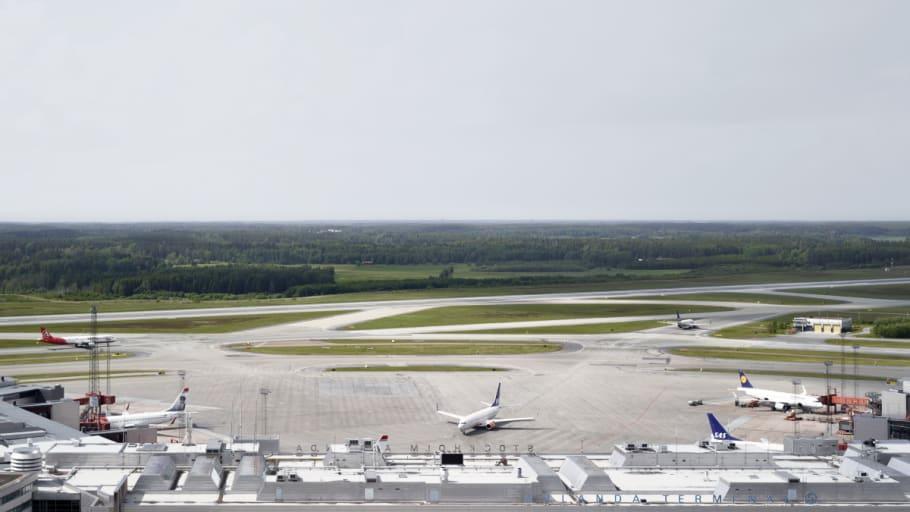 Swedavia introduced a special HVO 100 incentive at Stockholm Arlanda Airport and Göteborg Landvetter Airport on Jan. 1, 2022, in an effort to encourage companies and other organizations operating at Swedavia’s airports to become fossil-free and start refueling with HVO, fossil-free diesel. The goal is now for all ground operations at every Swedavia airport to be fossil-free by 2025.

The aviation industry and technology companies continue to work together to explore the development of sustainable aviation fuels (SAFs) as well as the use of hydrogen to power both electric and combustion engines to build cleaner aircraft. Building on research and development, some electric- and hydrogen-powered aircraft are beginning to take off, helping to pave the way for net-zero carbon aviation by 2050.