The facility leverages technology and processes from its headquarters in Normandy, France and takes them a step further in some cases, says Olivier Legrand, Revima’s president and CEO.

The machines are digitally connected to a monitoring system common to both Revima’s landing gear facilities so the company “can remotely detect deviations, alerts and maintenance requirements,” says Legrand. The system also should help optimize energy requirements. 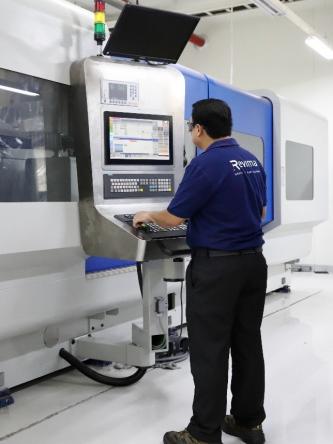 Just as it used its experience in France for the smart machines, Revima also applied its use of environmentally friendly practices driven by REACH compliance in Europe to choose the wide use of green chemicals and no-waste rejection from its plating processes.

Legrand says “2021 will be a year of ramp up” for Airbus A320 and Boeing 737 landing gear MRO. While the pandemic will hurt business, given that narrowbody flights are expected to accelerate faster than widebody services and that landing gear events are calendar based, “we are hopeful to see a minor impact on our plans,” he says.

The facility is capable of repairing other aircraft landing gear, so “we will be listening to our customers and evaluating in 2021 if other product developments are appropriate,” says Legrand.

Because the facility places Revima closer to its Asian customers, some of its existing customer contracts will be handled at the new site, as well as new contracts won during the pandemic.