Kazakhstan’s flag carrier Air Astana recently resumed flights to Turkey and Germany, but the COVID-19 pandemic has been tough on the central Asian airline that had flown its 32 aircraft on 64 domestic and international routes.

Keith Wardle, vice president of engineering and maintenance, says the pandemic and traffic drought required many MRO adjustments, such as changing staff counts, shifting rosters, doing unfamiliar maintenance for storage and pulling more MRO inside to save costs. “Challenging times require adaptability, and very early in the crisis we converted a Boeing 767, our flagship aircraft, to carry cargo in the cabin.” Air Astana’s engineers and mechanics executed a fully approved semi-conversion very quickly, capturing the shortfall in the air cargo market.

Wardle says his many grounded aircraft still needed high levels of maintenance even when not operating. “This is necessary to prevent deterioration of aircraft systems, fuel tanks, and to limit corrosion, without which an aircraft will quickly become non-airworthy.”

A joint venture of Kazakhstan's sovereign wealth and BAE Systems, Air Astana has not laid off any maintenance staff, although many are not at work. “We recognize the importance of their skills, which are scarce in this region, and have invested in training them,” Wardle says. “To be ready for the upturn in the market and growth between now and into 2022, we must keep hold of our highly competent technical staff.”

The portion of maintenance staff working was initially reduced to 30% in April when all flying except repatriation flights stopped. With services partially restored, the engineering group is working with 50% of staff, either on site or at home.

Air Astana’s location in Central Asia has always made the supply chain challenging, and the virus crisis has made it more so. “Due to the pandemic many suppliers and shippers are suffering their own restrictions,” Wardle notes. “Combined with a lack of transport options, this has led to a significant increase in time to deliver essential aircraft parts, requiring close management to ensure continuing airworthiness of aircraft is not affected.”

At the end of March, Air Astana’s whole fleet was parked and some aircraft put into storage. But even then a few flights were required, mostly for repatriation and often at short notice. “This caused some inconvenience, due to maintenance effort and the safety implications of putting aircraft into and out of storage, but this settled after an initial period of time,” the MRO chief says.

The crisis has forced Air Astana to early retire its aging 757s and older Embraer E190-100s. These aircraft were put into long-term storage and are in the process of being redelivered to lessors. “On a positive note, rationalization of the fleet does reduce the number of aircraft types and engines in service, reducing maintenance complexity and costs,” Wardle says.

Most of the airline’s reduced schedule is being flown by Airbus A320-family aircraft, with help from Embraer E190-300s. Air Astana engineers and mechanics get technical dispatch reliability of 99.4% from the Airbus jets. Wardle says A320ceos powered by the V2500s continue to perform extremely well for FlyArystan, the airline’s low-cost unit. And A320-family neos strongly appeal to passengers, especially the A321LR, he says. Significant fuel savings from Pratt & Whitney geared turbofans has helped during the crisis.

Due to low utilization of its fleet, Air Astana moved some C checks into the future, saving considerable costs in 2020. It continued to complete C checks that reached their calendar limit, and did these during the summer, which it would normally avoid. “This year, we were able to fully optimize the C-check interval because there was no summer peak,” Wardle says.

Engineers considered a program to optimize engine on-wing time, but they had optimized it in the past so stuck with the original shop visit schedule.

Air Astana did use the opportunity provided by the operational lull to remove all PW1100G engines still requiring critical modifications, sending them to Pratt & Whitney for quick turnaround. “With good cooperation from Pratt & Whitney, this was achieved in a timely manner, removing significant operational reliability risks from our neo fleet,” Wardle says.

And the airline has used its excess manpower to carry out aircraft modifications, service bulletins and repairs in-house, saving labor costs for future C checks with its outsource MROs.

With so much work done during the traffic slump, Wardle does not expect any problems from return to service, which mostly affects aircraft in storage awaiting redelivery.

The pandemic did halt most MRO innovation. “To save costs during the crisis, all projects were frozen, unless a significant saving was immediately available,” Wardle explains. “Maintenance processes continue much as before and, when the operation picks up, I envisage we shall begin to rejuvenate projects that bring improvement and further efficiency.”

The E&M VP expects his challenges now include minimizing risks associated with unusual circumstances, such as prolonged aircraft storage and additional health and safety procedures required to prevent the virus spreading.

But his biggest challenge is managing the retirement of about eight 757s and E190-100s. “To redeliver so many aircraft in only a few months presents a big challenge, stretching the resources of many departments, especially technical records, technical services and maintenance.” Fortunately, the same crisis that made it necessary to redeliver so many aircraft freed up the manpower to do the work. 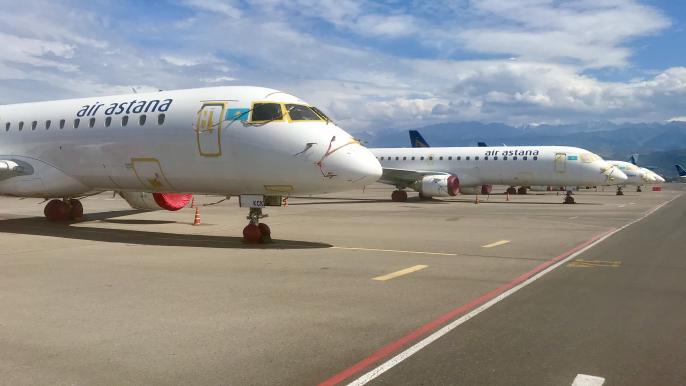