Sat, as they are capacity-wise, between regional aircraft and the big-selling single-aisle narrowbodies, crossover narrowbody jets are designed to give an airline flexibility in a variety of ways. The most common element applied to this attribute is the ability to right-size an aircraft to a service.

That can mean ensuring that something like a 737 or an A320 is not used on a route where it might regularly fly with a low load factor. This might be across a whole day or just at certain times when fewer passengers are predicted. Also, putting two crossover jet services on instead of one with a larger narrowbody can attract passengers for whom the schedule is a more important factor in their choice of carrier.

The benefits to an airline all add up. In this scenario, there would be less fuel used, as a crossover jet with the same amount of passengers would obviously weigh less and therefore lower amounts of fuel would be used by not transporting all those empty seats. Additionally, in jurisdictions where emissions are charged, less fuel burnt would cause fewer emissions and such charges would be reduced.

Then there are the landing charges which depend on the weight of the aircraft; again, lower aircraft weight brings those fees down. Another operational benefit would be having to pay for one fewer flight attendant on the crossover jet compare to the larger narrowbody.

Delta Air Lines operates both the A220-100 and the A220-300. As an example of the A220-100’s capability, the airline has services out of its Detroit hub featuring shorter sectors such as the 350 nm journey to Washington Reagan National, with a flight time of around 1hour 20 minutes, while further up the scale, there is the Detroit–Austin service which covers 1,000 nm to Austin, TX, in an estimated flight time of 2 hours 40 minutes.

Even longer sectors operated by Delta with the A220-100 include Los Angeles International to Houston Bush at 1,200 nm, lasting approximately 3 hours 20 minutes and Boston to Austin, which takes around 3 hours and 40 minutes to cover the 1,480 nm between the two cities.

Delta’s A220-300s are used with similar flexibility, enabling the carrier to offer the optimum amount of seats on all its routes, mixing crossover jets with larger types.

To the north, Air Canada is currently growing its fleet of A220-300s. From both its main easter hubs of Toronto Pearson and Montréal, these aircraft operate the relatively short flights (2 hours and 1 hour 30 minutes respectively) to Charlottetown in the eastern province of Prince Edward Island, mixing up the service with Embraer 175s to provide right-sizing according to the time of day for each flight.

Air Canada uses the legs of the A220-300 to head west from Toronto Pearson to destinations such as Calgary, Denver, Edmonton, San Francisco and Seattle. Montréal services west also include Calgary and San Francisco, but also operated are flights to Los Angeles International and Vancouver.

From both Toronto and Montréal, San Francisco is the longest of those routes mentioned above, with the former taking around 4 hours 45 minutes to cover the 1,966 nm, while the latter flight over 2216 nm lasts approximately 5 hours 20 minutes.

Air Canada also operates the A220-300 out of Calgary to destinations such as Kelowna, Ottawa and Vancouver among others.

In Europe, Swiss is another carrier to operate both A220 models. One of the destinations served is London City Airport, known for its steeper glide slope, for which the A220-100 is certified. The airline flies there from both Geneva and Zurich, though it has not yet reinstated fully the pre-pandemic schedules.

A number of Swiss services are operated by Helvetic Airways with its fleet of Embraer E-Jets, comprising six E190s and eight E190-E2s, shortly to be joined by the first of four E195-E2s. Again, an airport with limited access – namely Florence – is one of the destinations for which the crossover jet is used.

KLM – under the guise of its subsidiary KLM Cityhopper – has been an operator of crossover jets, in the shape of the E190 (plus the smaller E175) for some time. Now it is in the process of receiving a total of 35 E195-E2s from Embraer. These are being configured for 132 passengers. 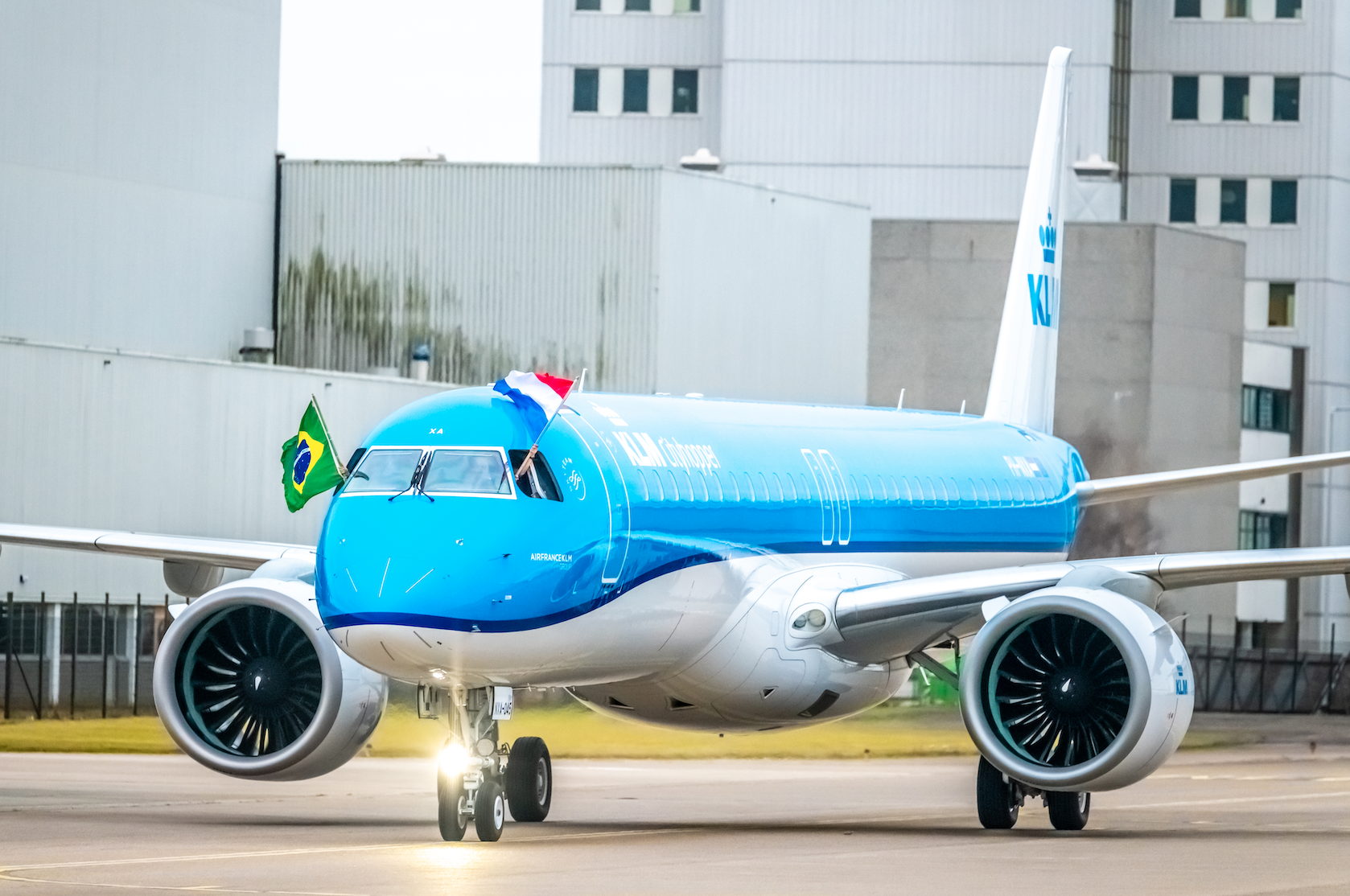 KLM uses Cityhopper very much as a right-sizing vehicle in every sense of the term, including the ability to include destinations which would not support its 737s and also to have the right capacity on off-peak services. Also, the E-Jets are used to London City and Florence, where operational access is limited.

Widerøe was, of course, the airline which put the first E2 into commercial service on its Bergen–Tromsø route in April 2018. Here the crossover jet is first and foremost providing growth for a regional airline as the largest capacity aircraft the carrier had operated previously was the De Havilland Dash 8-400. Now, with its first ever turbofan-powered aircraft, Widerøe is regularly offering 110 seats for travellers between Bergen and both Bodø and Tromsø.

On the Bergen–Trondheim service, however, the E190-E2 is being used for time-of-day right-sizing, operating when extra volume is needed on the schedule beyond the 78-seat Dash 8-400 which operate the service on the majority of occasions.

Although the type has also operated services from Bergen to London Heathrow and Munich, the timetable is in flux due to the pandemic conditions imposed by governments.

In Africa, Air Tanzania has put a crossover narrowbody type to a different use, operating the A220-300 as its sole narrowbody type (it currently has two), with two Dash 8-400s offering a lower capacity, regional option and two Boeing 787s supplying larger capacity with long-haul capability.

Meanwhile, Aviation Week Network reported on 22 April that, by July, Air Tanzania is intending to put two more A220-300s into service. This move reinforces the current strategy of eschewing the larger narrowbodies.

One step on from Air Tanzania using a crossover jet as its narrowbody option is airBaltic, which has now removed from its fleet all types other than the A220-300. The airline operates the aircraft from its main hub in Riga, Latvia and its smaller hubs in the Lithuanian capital Vilnius and the Estonian capital, Tallinn.

The network stretches from Reykjavik to the northwest, Tenerife to the southwest, Moscow to the east and Dubai to the southeast. In the current schedule, flight times from Riga range from 40 minutes to Liepaja (also in Latvia) to the 6 hour 25 minute journey to Dubai, clearly underlining the A220-300’s flexibility and viability over short and long distances.

There are likely to be many more such examples in the future.