It may not yet be considered a mature aviation market, but Africa is expected to be a huge area for growth in aircraft acquisition during the 2020s. One of the features of that growth is likely to be the ability of carriers to move straight to a right-sized fleet.

The classic narrowbody workhorses of the Airbus A320 and Boeing 737 families have led the way for many years, and understandably so. However, below their capacity level, there has arguably been less structure in carriers’ fleets.

With the advent of the crossover narrowbody jets such as the Airbus A220 family and Embraer E-Jets (now, of course, in their second generation, the E2 family), the gap has been filled between those workhorses and regional jets and turboprops.

In fact, despite their ability to fly reasonably lengthy sectors, regional jets never sold in big numbers across Africa. Although the current number of crossover narrowbody jets across the continent is still relatively small, there is considerable optimism for sales figures much bigger than the RJs achieved.

Daniel Galhardo, director of strategy, Embraer Commercial Aviation, acknowledges that although in terms of new aircraft sale numbers, regional jets did not breakthrough in Africa, the company does have examples of substantial fleets being successfully operated by carriers, such as Airlink and Kenya Airways. “The pre-owned market is very relevant in Africa, probably more than anywhere else in the world, and when we consider that, we see significant penetration for the segment,” he remarks.

“We believe crossover narrowbody jets will continue to fare better in the market, primarily because it is a region with important inefficiencies to be overcome. For example, 66% of the total ASKs (available seat kilometres) are flown by aircraft with more than 150 seats, but more than half of those flights (55%) have fewer than 130 passengers per day (PPDs). So it is clear that those large narrowbodies are being sub-optimally, and expensively, deployed,” Galhardo adds.

“This leads to other issues for the region: low frequencies for domestic and intra-regional flights, leading to poor network connectivity; low load factors – on average, the lowest in the world according to IATA; and thus low profitability. We strongly believe crossover narrowbodies are the right-sized to address those issues,” he emphasises.

The strategy director such a trend is under way for Embraer aircraft with Nigeria’s Air Peace having firm orders for 13 new E195-E2s, deliveries of have already begun, as well as four firm orders from Congo Airways for two E190-E2s and two E195-E2s.

At Airbus, one of the reasons why Mikail Houari, president, Airbus Africa and Middle East, believes that his company’s offering in the crossover jet segment – the A220 pairing – will sell better than RJs is because right from the onset, the A220 was designed specifically to address the market gap between RJs and single-aisles, with a fuselage cross-section optimised to address the 100-to-150 seat market.

“In Africa, the potential market for the A220 is a combination of aircraft replacement (new replacing old), growth (upsizing from smaller aircraft) and new operators,” Houari explains. “From the Ascend April 2021 database, we identify a potential market of around 450 aircraft:

“The A220 is ideally positioned to address this market, not just in terms of size, but also with regards to its unique product characteristics,” Houari claims. “It offers true single-aisle comfort as well as the highest baggage and cargo capability, which is particularly relevant to the African market, where it has the range flexibility to cover domestic, intra-African and international markets making it a truly versatile aircraft.”

While considerable growth continues to be expected, the Covid pandemic will clearly affect the figures in the OEMs’ forecasts for these types in Africa, although it may merely be a time shift. “The main consequence of the pandemic has been a fall in demand that has strongly affected all aspects of air transport in Africa,” Houari confirms. “We anticipate that 2019 traffic levels could return by 2023 at best, or 2025 in the worst timeframe.

“This short-term economic crisis does not mean the end of long-term economic growth,” he stresses. “The fundamental drivers of economic growth in Africa have not changed. The resultant air traffic growth will be driven by demography, with a population expected to exceed 2 billion within 20 years, as well as by urbanisation and middle class development. Inbound tourism and intra-Africa tourism will continue to contribute to national economies and drive air traffic growth. We are confident that the A220 will play a significant role in meeting the needs of air transport in Africa.” 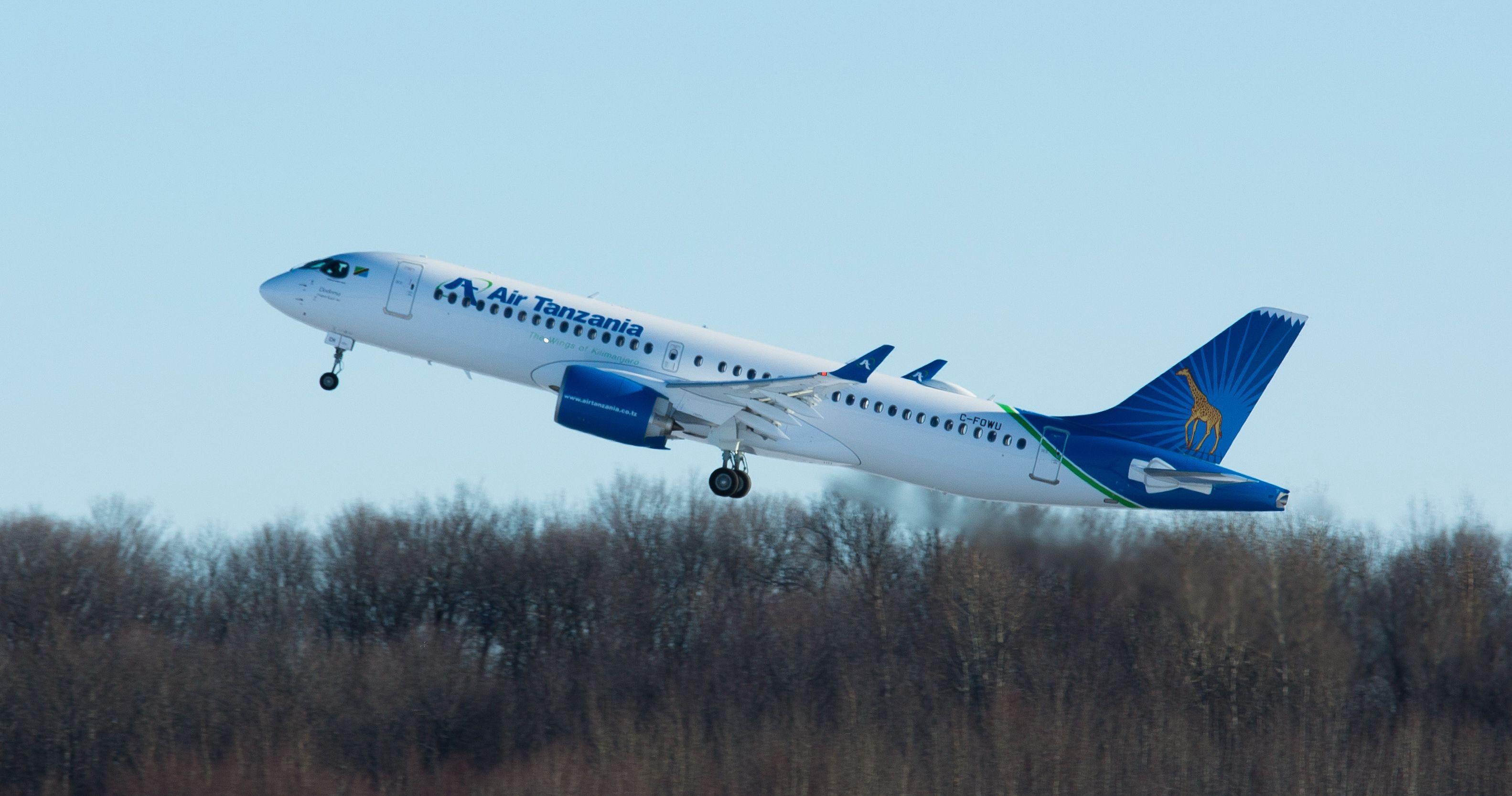 At Embraer, the feeling is that its forecast for these types in Africa, in terms of aircraft entering the system, has not changed much. “Although COVID affected all regions of the world, including Africa, we believe the need to address the aforementioned air transport inefficiencies on the continent will keep the demand for both regional jets and crossover narrowbodies steady or even larger,” declares Galhardo. “Also, it is relevant to mention that if you consider our most recent Market Outlook [2020-2029] numbers, the continent is expected to have one of the largest new deliveries rates of crossover jets (100) when compared to large narrowbodies (110).

One of the past challenges in selling aircraft into Africa has been sourcing funding has never been easy in the African market, so what do the OEMs think about the prospects of crossover jets attracting money for purchases?

“First of all, export credit agencies (ECAs) are expected to cover any gaps from the private banking sector. Historically this has been the case and now – especially due to Covid – we expect ECA funding to bridge gaps,” remarks Matheus Piorino, director customer finance, EMEA, Embraer Commercial Aircraft.

“Africa counts also on different multilateral banks that count on aviation dedicated teams, such as Afreximbank and AfDB (African Development Bank). As regional aviation plays a special role in developing local economies and connecting them domestically and regionally, it comes as no surprise that these institutions tend to give extra importance to this sector.

“Local banks are also increasingly relevant,” Piorino continues. “While they may not have dedicated aviation finance teams, they know the airlines and the local markets as well as having local currency capabilities lacking from some foreign banks and ECAs. This can prove to be quite compelling for airlines.

“We therefore see good options to support the introduction of new aircraft to African carriers. The fact that several airlines in Africa are also state-owned can facilitate financing with government guarantees being provided to enhance the security of these financing transactions.

“Last but not least, lessors and international banks are also paying close attention to this market and certainly want to participate more as the aviation markets and economies in the region continue to develop,” Piorino comments, before adding the cautionary note that revenues in local currency and repossession risks are the greatest challenges faced by financiers.

Houari points out that, as with other products in the Airbus portfolio, African airlines can benefit from various financing sources. “Leasing companies have been very active in the aviation finance market, placing aircraft that they have on order with Airbus or securing sale and leaseback transactions at time of delivery. Several of them have been expanding their footprint on the African continent over the past few years,” he reports.

“Debt financing is also available through different instruments involving key players in the aviation finance market, such as international commercial banks and financial institutions that are customarily engaged in the financing of Airbus products,” he adds. “African airlines can also have access to export credit support in line with the OECD Aircraft Sector Understanding (ASU). Export Development Canada (EDC) is the export credit agency supporting the A220 while Bpifrance, Euler Hermes and UK Export Finance support the other Airbus products.”

Like Piorino, Houari highlights other African financing solutions such as the aforementioned African Development Bank (AfDB) and Afreximbank, as well as the Trade and Development Bank (TDB), whose mandates are to spur sustainable economic development and social progress. “Acknowledging the relevance of the A220 to the African air transport market, they are likely to play a key role in providing or facilitating financing solutions for it,” he predicts.

“Finally, there is also the scenario where a government will directly fund the aircraft purchase, acknowledging both the relevance of the aircraft selected, as well as the critical role played by a national carrier in the economic development of the country,” Houari states.

In all these cases, the OEMs are committed to helping customers find the most appropriate financing for their needs, so if you’re flying in Africa once services get closer to the expected growth path, be ready to fly on a crossover narrowbody jet.

ENERGIA. THE SHAPE OF THINGS TO COME