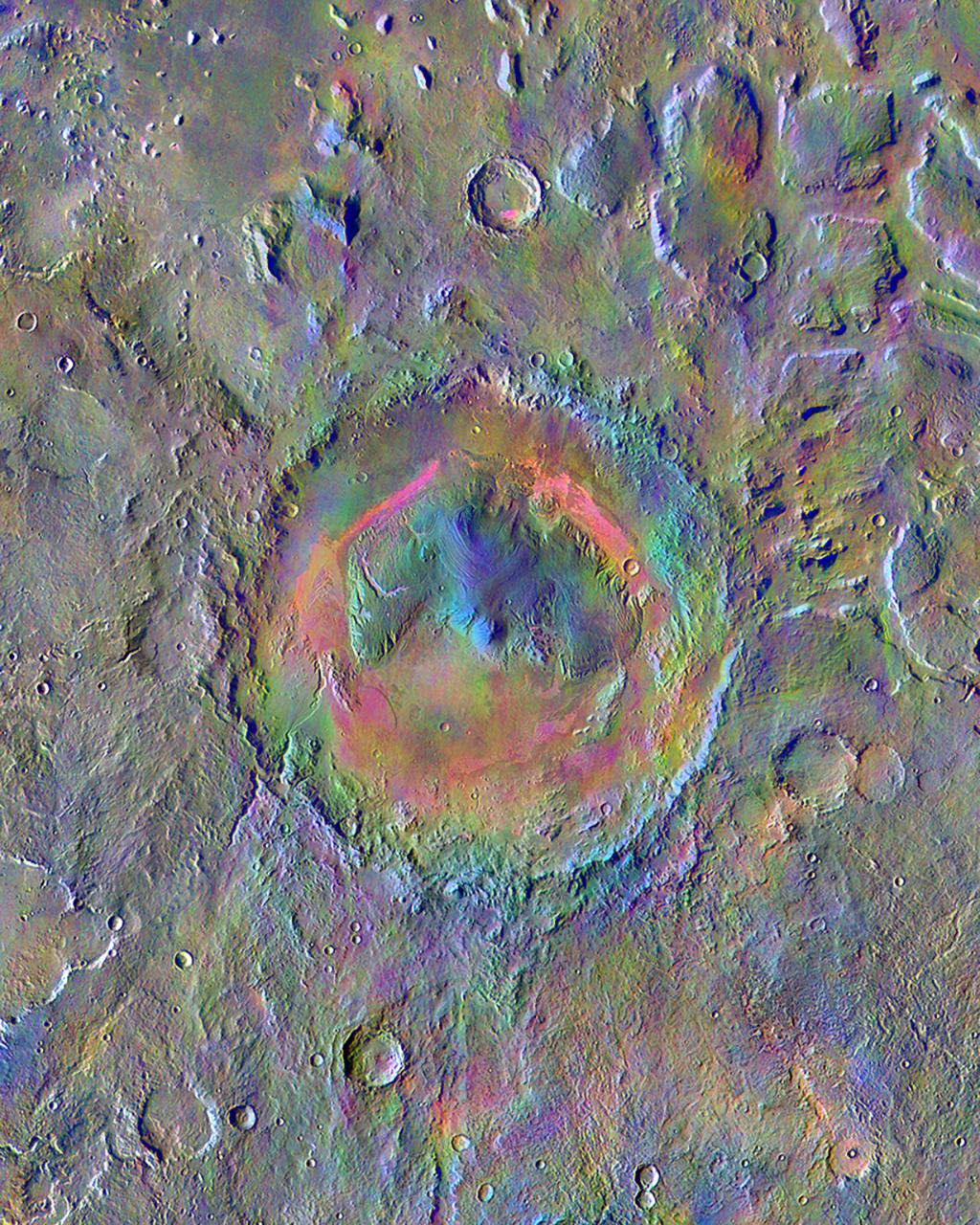 The fleet leader is NASA’s Mars Odyssey, an orbiter that arrived in October 2001. It broke the record for the longest-serving spacecraft around Mars in December 2010. Built by Lockheed Martin, Odyssey is outfitted with spectrometers and a thermal imager to detect evidence of past water and present-day ice and to study the planet’s geology. This mosaic of Gale Crater, which NASA’s Curiosity rover is exploring, was made from data collected by Odyssey’s Thermal Emission Imaging System. The colors come from an image-processing technique that identifies mineral differences in surface materials and displays them in false color. Credit: NASA/JPL-Caltech/Arizona State University 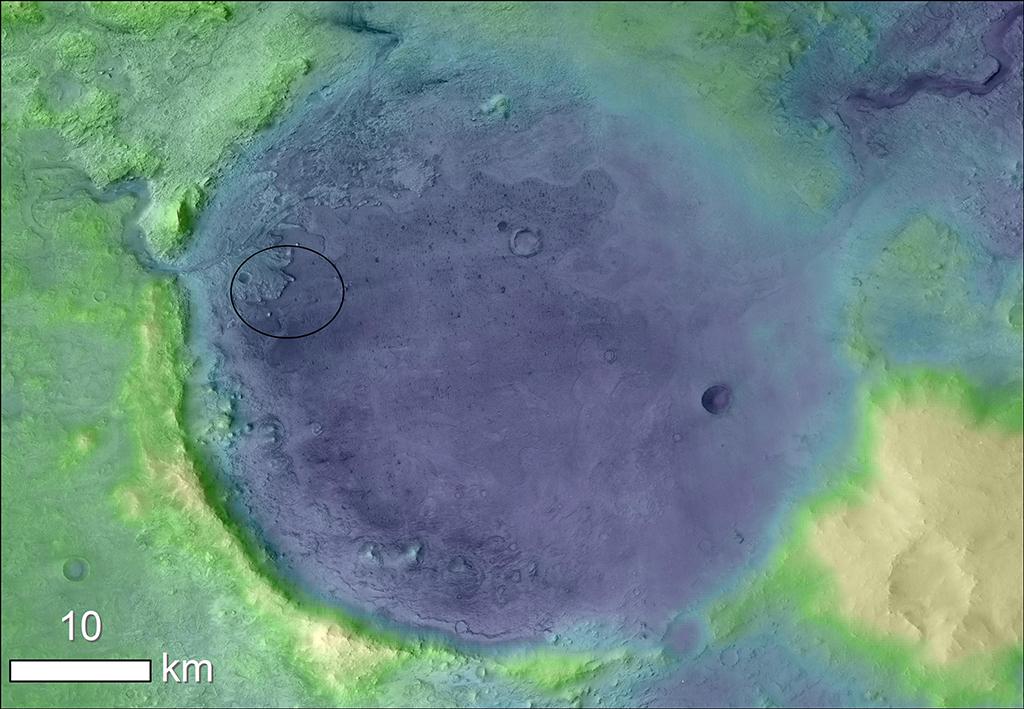 Odyssey was joined in December 2003 by the European Space Agency’s Mars Express, which has taken high-resolution images of more than 95% of the planet’s surface. Its onboard spectrometer has found deposits of clay minerals—evidence of past water that was low in acidity. Mars Express also has a ground-penetrating radar to prove the existence of subsurface ice deposits. Data from Mars Express’ High-Resolution Stereo Camera is included in this elevation map of Jezero Crater, the landing site for NASA’s upcoming Mars 2020 Perseverance rover. Credit: NASA/JPL-Caltech/MSSS/JHU-APL/ESA 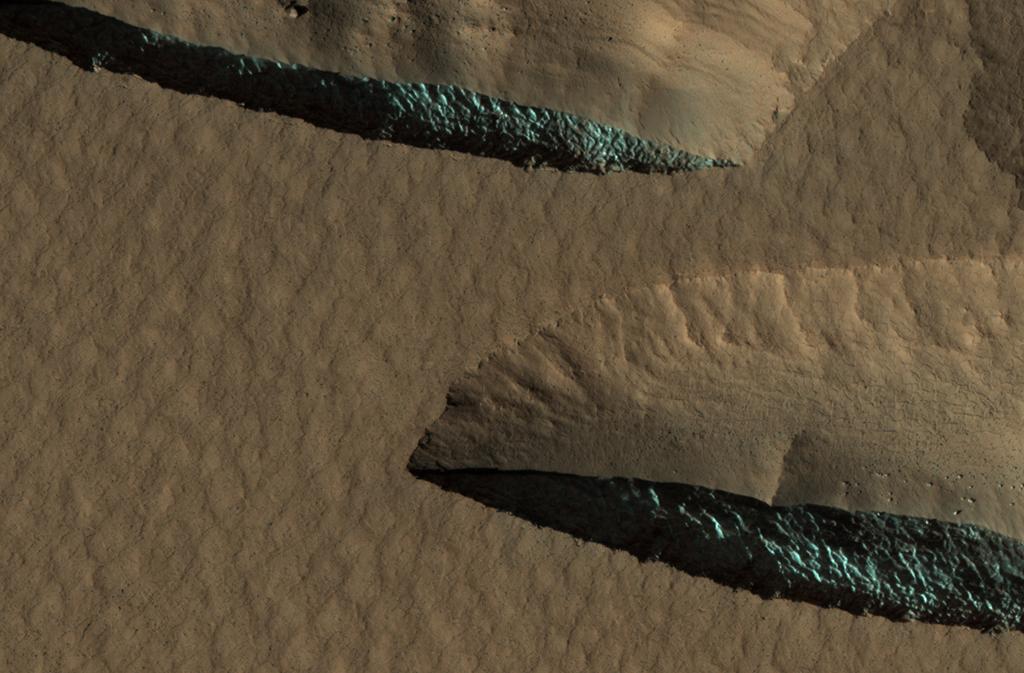 In March 2006, NASA’s Mars Reconnaissance Orbiter (MRO) joined the growing fleet of spacecraft in orbit around Mars, with a mission to study the geology and climate of Mars, scout landing sites for future probes and serve as a communications relay for surface missions. This image, taken by the spacecraft’s High-Resolution Imaging Science Experiment, is an example of steep scarps facing the poles of both hemispheres that expose thick sections of nearly pure water ice, a resource for future crewed missions to Mars. Credit: NASA/JPL-Caltech/University of Arizona 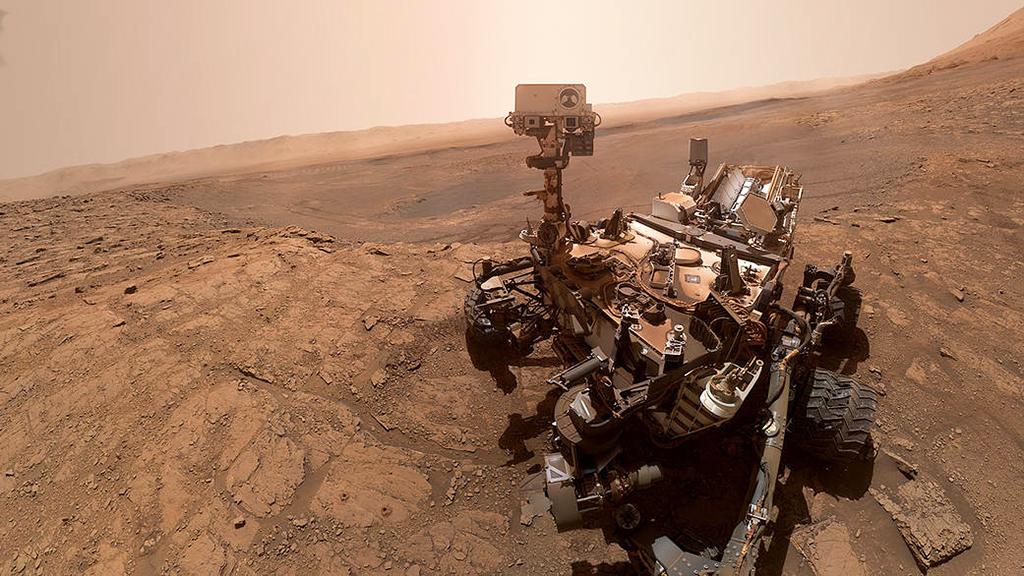 Following the now-defunct scout rovers Spirit and Opportunity, NASA sent a sophisticated SUV-size rover to Gale Crater to assess if the ingredients and conditions to support life had ever existed on Mars. The rover carries 10 scientific instruments, two of which are attached to a robotic arm that is used to scoop up soil and deliver samples into ovens for heating and analysis. Curiosity made a dramatic, sky-crane-assisted landing in August 2012, laying the groundwork for a follow-on mission by Perseverance to search for signs of ancient microbial life and to cache rock and soil samples for a future return to Earth. Curiosity took this self-image in October 2019. Credit: NASA/JPL-Caltech/MSSS 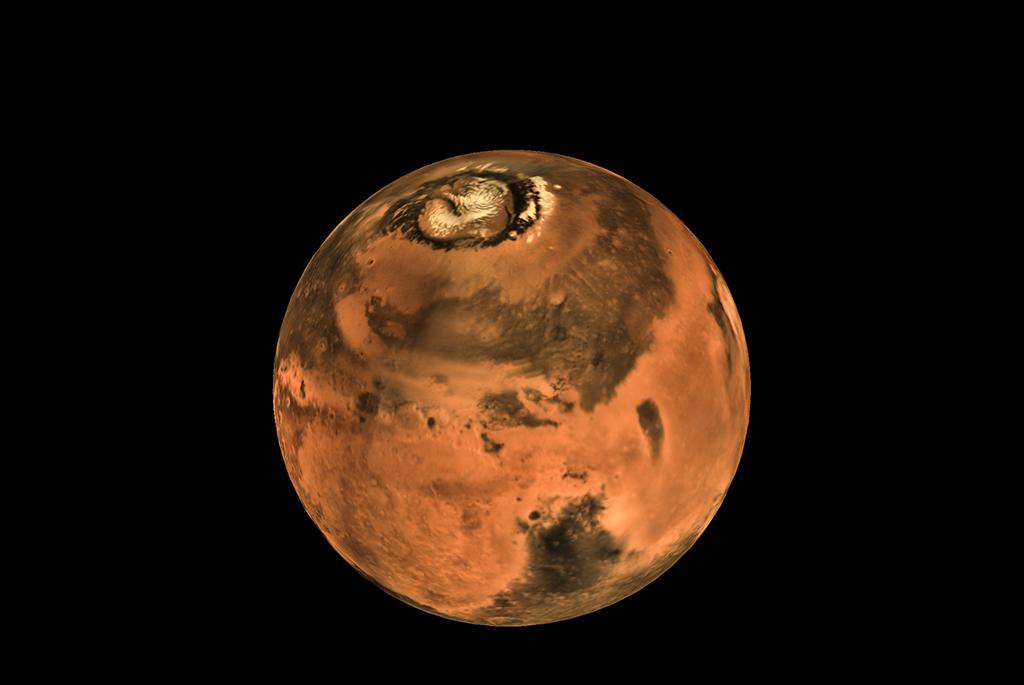 India made its Mars debut with the arrival of the Mars Orbiter Mission (MOM) in September 2014. MOM carries five science instruments to survey the planet, gathering data on the Martian climate and the mineral composition of the planet’s surface. This image is a mosaic from images taken by the orbiter’s Mars Color Camera. Credit: ISRO 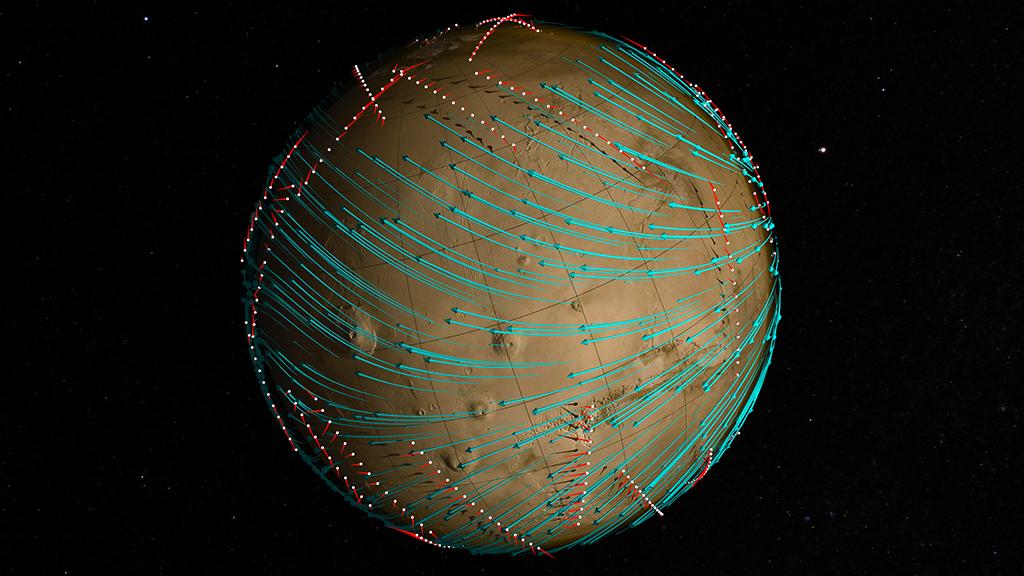 NASA’s third orbiter, the Mars Atmosphere and Volatile Evolution mission (MAVEN), arrived in September 2014 for a novel mission: to study the planet’s upper atmosphere and ionosphere and its interactions with the Sun and solar wind. The point is to study the loss of volatile compounds, such as carbon dioxide, nitrogen and water, from the atmosphere into space, with the aim of understanding how Mars’ atmosphere and climate changed over time. This is a computer-generated visualization of upper-level wind speeds and directions measured by MAVEN’s Neutral Gas and Ion Mass Spectrometer. Credit: NASA Goddard/MAVEN/SVS/Greg Shirah 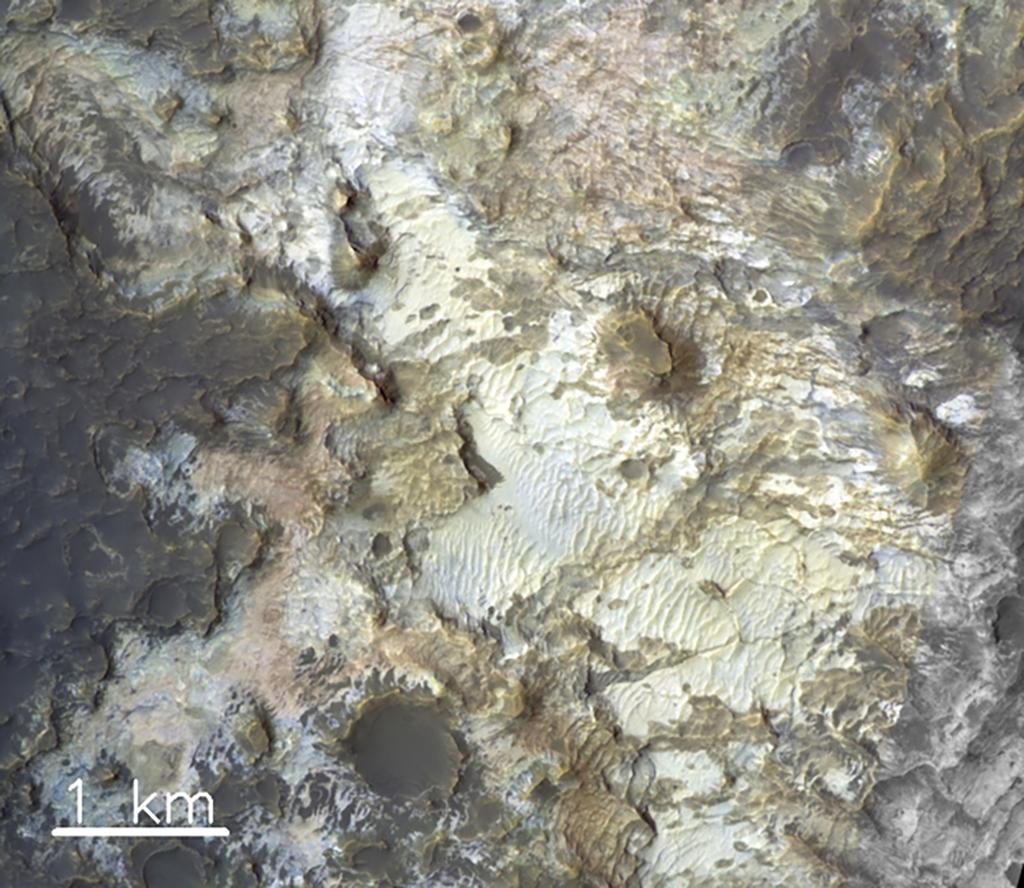 A joint mission of the European and Russian space agencies, the ExoMars Trace Gas Orbiter (TGO) is intended to gain a better understanding of methane and other atmospheric gases that are present in very small concentrations but could point to biological or geological activity. TGO’s Color and Stereo Surface Imaging System captured this color-composite image of the floor of Kibuye Crater in the Terra Sirenum region in December 2018. It highlights a rich variety of minerals in the rock. Credit: ESA/Roscosmos/Cassis 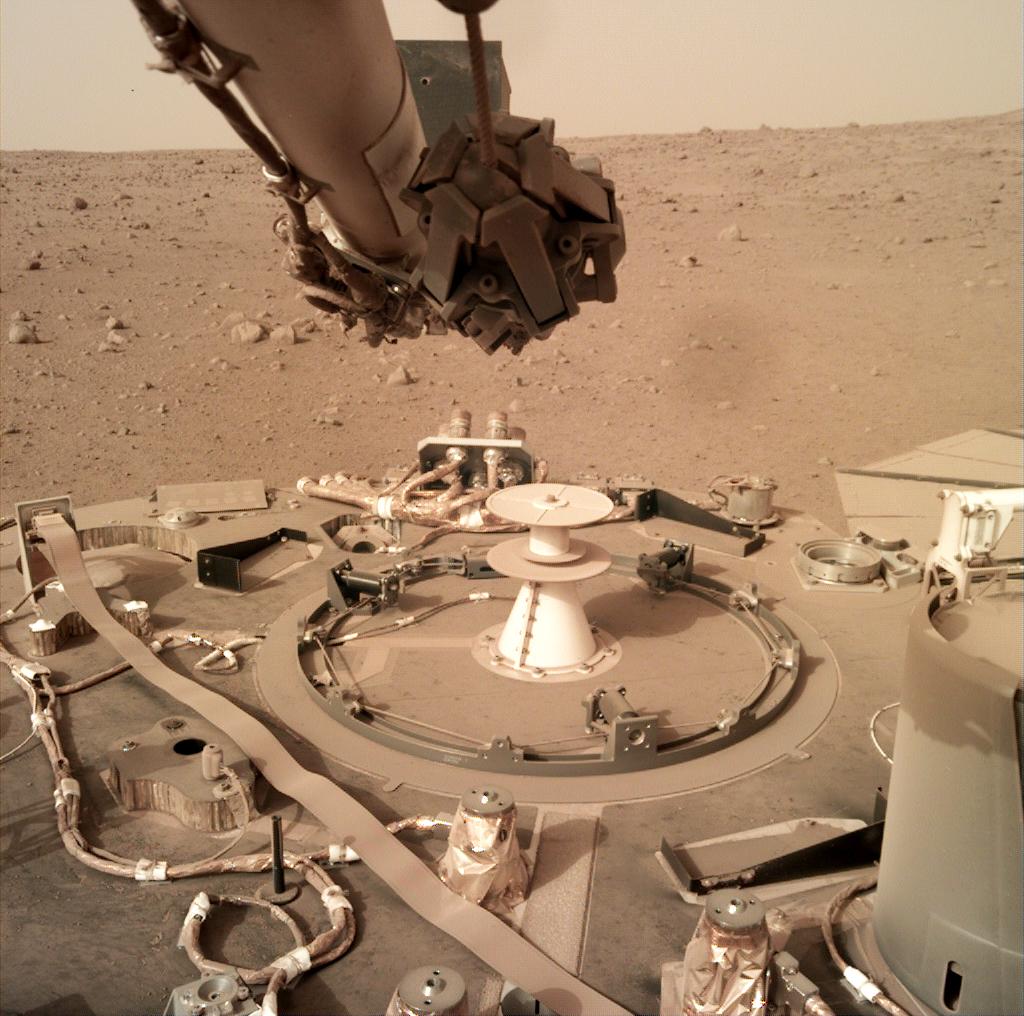 The latest member of the current Martian armada is NASA’s Interior Exploration Using Seismic Investigations, Geodesy and Heat Transport (InSight) lander. It arrived in November 2018 to probe the planet’s interior with two instruments: a seismometer and a heat flow probe. This image was taken by the Instrument Deployment Camera, mounted on the lander’s robotic arm on July 18, 2020. Credit: NASA/JPL-Caltech

In February 2021, spacecraft from the United Arab Emirates, China and the U.S. are expected to join a fleet of eight probes already operating on and around the red planet. Here is a look at the current Mars fleet.