The mystery of the classified projects—including such details as their development or operational status and any gaps each fills in the Pentagon’s unfolding hypersonic weapons architecture—remains unsolved. But a new clue embedded in the LinkedIn profile of a senior Defense Department hypersonic weapons expert may point to the answers.

Greg Sullivan, a well-regarded expert in the high-speed flight community, describes himself on the professional social media platform as an on-site supporter of air-breathing hypersonic weapons to the department’s research and engineering arm.

Sullivan’s profile also cites his knowledge of “additional hypersonic programs,” which include a nearly comprehensive list of the Pentagon’s acknowledged projects. Intriguingly, his original list also included two additional acronyms representing hypersonic programs: “HACM” and “HCCW.” Shortly after Aviation Week inquired to the Air Force Public Affairs office for details about HACM and HCCW, both acronyms were deleted from the LinkedIn page.

The Air Force does not acknowledge the existence of any program named HACM or HCCW, and no reference to either acronym appears in the military’s public documents, such as budget materials and press releases.

Two sources say they have heard vague references to the existence of a hypersonic program called HACM, but had no details, including what the acronym means. The HCCW program was not known to any sources or analysts contacted by Aviation Week.

The expert hypersonic community is an unusually tight-knit group, reflecting the technology’s mostly experimental status for decades, until its recent rise as one of the Pentagon’s top acquisition priorities. The existence of two new acronyms has prompted several speculative guesses.

Richard Hallion, a former Air Force chief historian who specializes in the history of hypersonic technology, noted that the acronym HACM could be interpreted broadly to cover almost any type of hypersonic weapon, including scramjet-powered cruise missiles or air-launched boost-glide systems.

The meaning of the HCCW acronym proves even more elusive. For Justin Bronk, a research fellow specializing in airpower at the Royal United Services Institute, one speculative interpretation conforms to his analytical view of a gap in the U.S. military’s weapons arsenal. If the acronym stands for “Hypersonic Counter-Cruise Weapon,” Bronk says, HCCW could be a valuable interceptor specifically tailored against high-speed, air-breathing cruise missiles.

Although the exact role and status of HACM and HCCW are unknown, industry officials have repeatedly said that at least two additional classified programs exist beyond the Defense Department’s seven acknowledged programs. The public list leaves little room for gaps to be filled by new weapons, as they already span air-, land- and sea-launched options and include two different types of boost-glide systems—winged and biconic—and a scramjet-powered cruise missile.

The plethora of planned hypersonic options are intended to serve tactical and strategic goals. On the tactical level, the Pentagon’s war planners will gain a new option for striking mobile missile launchers and countering long-range attacks on the Navy’s surface fleet by an adversary with hypersonic anti-ship missiles. The future U.S. inventory of hypersonic missiles also is intended to serve as a deterrent option short of a nuclear response, as adversaries such as China and Russia stock their arsenals with a range of new hypersonic weapons.

The ARRW, also known as the Lockheed Martin AGM-183A, is based on the Tactical Boost Glide (TBG) program, a risk-reduction effort funded by DARPA. The same winged glide vehicle also is being adapted for ground launch under DARPA’s Operational Fires (OpFires) program. Raytheon says it is developing a more advanced winged glider under the TBG program, which could be fielded as a second-generation version of ARRW. 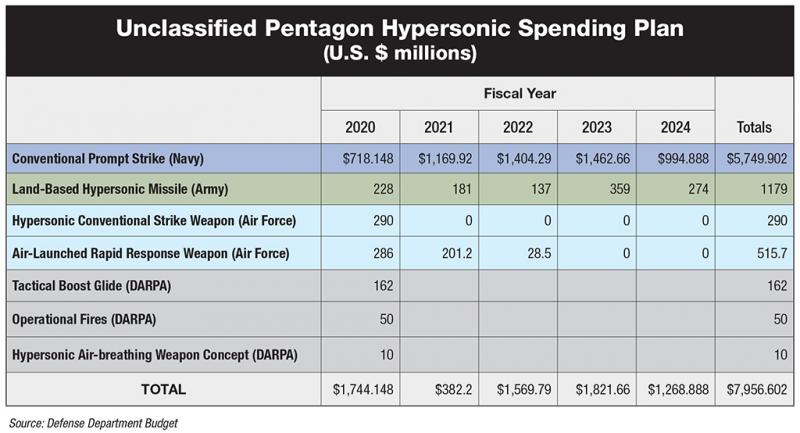 HCSW, meanwhile, is the air-launched version of a biconic-shaped glider originally designed by Sandia National Laboratories. The Navy and Army are adapting the same original design for the sea-launched Conventional Prompt Strike (CPS) system and the Army’s ground-launched Long-Range Hypersonic Weapon (LRHW).

Finally, Raytheon and Lockheed are each designing different scramjet-powered missiles under DARPA’s Hypersonic Air-breathing Weapon Concept (HAWC) program. Weaponized versions of HAWC are under study by the Air Force and Navy for air and sea launch. One possible gap in the weapons portfolio is the apparent lack of an operational follow-on program for HAWC, even though Air Force officials say the program is slightly ahead of DARPA’s TBG program. The TBG demonstrator is intended to reduce risk for the operational ARRW system, but no such operational follow-on exists publicly for HAWC.

“There are probably six different types of hypersonic programs that we have,” Bussing said in a recent interview. “Some are classified, so I can’t speak [about] them because we are not at liberty to announce them.” But he named Raytheon’s role in four hypersonic programs: TBG, HAWC, CPS and LRHW.

DARPA has announced Raytheon’s involvement as one of two weapon designers for TBG and HAWC, but neither the Navy nor the Army has explained Raytheon’s role in CPS and LRHW. The Air Force has announced that Lockheed is the weapon system integrator for the HCSW variant, but no such role has been announced for the Army and Navy versions of the common glide vehicle. So far, Bussing can only acknowledge that Sandia remains the designer of the biconic glider for HCSW, CPS and LRHW.

“That technology has been transitioned over to the CPS program and also to the Army’s Long Range Hypersonic Weapon program,” Bussing said. “So we’re involved in both, and we’re working directly with Sandia.”

The Defense Department has inserted $10.5 billion into a five-year budget plan released in March to develop and field the long list of offensive and defensive hypersonic weapon systems. But a detailed check of the budgets for unclassified programs reveals a significant surplus, which could be used to fund classified projects.

The combined budget accounts for ARRW, HCSW, CPS and LRHW amount to $7.7 billion over the next five years. The Missile Defense Agency’s $700 million planned investment in counter-hypersonics raises the five-year spending total to $8.36 billion. DARPA does not release a five-year budget, but proposed to spend $222 million in fiscal 2020 on TBG, HAWC and OpFires. That still leaves an unexplained gap of about $2.5 billion in planned spending by the Defense Department on hypersonic weapons over the next five years.

Steve covers military aviation, missiles and space for the Aviation Week Network, based in Washington DC. Born in a U.S. Air Force family, he grew up on military bases around the world and came to Washington DC in 1997 to work for Army Times Publishing Co. as a journalist. Steve helped launch the Military.com portal in 2000, then joined the editorial team for Aviation Week’s web site in 2001. He reported on the Pentagon for Aerospace Daily in 2002 and 2003.