In June 2019, U.S. Air Force Gen. James Holmes strapped into an Israeli Air Force M-346 Lavi advanced jet trainer and flew off to attack a ship in the Mediterranean Sea.

Of course, the attack was simulated: The threats and target appeared as constructed elements on the sensor displays inside the cockpit. The purpose of the exercise was not to defend the Israeli coastline but instead to show Holmes a new way of training pilots as the Boeing T-7A enters service within three years.

The U.S. Air Force pilot training curriculum is almost as dated as the 60-year-old Northrop T-38Cs the T-7As will replace. New fighter and bomber pilots spend two years mastering basic skills at bases focused solely on training new pilots; then they move on to fighter training units (FTU) at operational bases. When Holmes entered the Air Force in 1982, FTU pilots still flew about 250 hr. each year. With flight-hour costs for F-15Es, F-22s and F-35As now over $25,000 per hour, FTU pilots today on average log about 150 hr. annually, contributing to a four-digit backlog of pilots certified for combat.

But Holmes’ experience with the Israeli Air Force has inspired a new approach to changing U.S. Air Force training. Unlike the T-38C’s limited computing power, the M-346’s embedded simulation system allows pilots at FTUs to fly realistic combat scenarios. As the T-7A enters service with similar technology, the Air Force is considering a broad shake-up of its pilot training system. The end result would be streamlining the curriculum by teaching fundamental skills and shifting earlier to combat training with T-7As instead of F-35s, F-22s or F-15Es.

To determine the best approach, Holmes’ ACC launched Project Reforge. The original idea outlined in May 2019 called for leasing eight Korea Aerospace Industries (KAI)/Lockheed Martin T-50 jets from Hillwood Aviation for five years. ACC hoped to use the jets to understand how embedded training systems in the T-50 cockpits could allow the Air Force to streamline the pilot training system.

The ACC is still pursuing Project Reforge, but the acquisition process has been trickier than expected. Mission Systems Solutions (MSS), which has partnered with Leonardo to offer the M-346, objected to a plan from ACC to sole-source the lease deal to Hillwood’s T-50s. Ultimately, the Air Force agreed to open the lease deal to competition and released an “invitation to propose” to industry in June.

As the bidding deadline passed on Aug. 17, however, ACC changed course again. The invitation to propose for the lease deal was canceled for unknown reasons. Instead, ACC is continuing to accept proposals under a less formal process called a Commercial Solutions Opening (CSO). The CSO allows ACC to accept proposals for providing advanced jet trainers through means other than a leasing arrangement.

Meanwhile, a new company called Quesada Aviation Holdings has emerged to submit a proposal with the KAI/Lockheed T-50, replacing Hillwood.

“Quesada is fully prepared to support the [Air Force] and Air Combat Command,” says Seth Downing, the CEO. “We are pleased to see the CSO open and look forward to working alongside the [Air Force] and ACC in structuring a mutually beneficial and commercially viable alternative.”

MSS also remains active in the Reforge project as the Air Force shifts to the CSO process.

“We began conversations with the Air Force about the Reforge training concept more than a year ago,” says David Nichols, CEO of MSS. “We are continuing discussions with them to better understand their requirements and provide innovative solutions.”

The final decision on the acquisition path for Project Reforge will be made by Gen. Mark Kelly, now the head of ACC, and will determine how to move forward with pilot training reform. 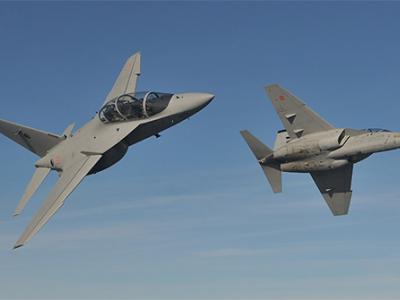