Editor’s note: This is the second of two consecutive daily installments of the 20/Twenty G280 article. Here's the first.

Eight years since entering service with operators, the Gulfstream G280 remains at the forefront of business jets in terms of technology and performance.

Gulfstream G280 options range from $1 million to $3.5 million—the costliest of which is the HUD/EVS combination of a Collins Head-up Guidance System with infrared imagery provided by a nose-mounted, cryogenically-cooled Elbit-Kollsman EVS camera. On Dec. 10, 2020, satellite communications provider Viasat announced the availability of its high-speed Ka-band inflight connectivity service on the G280. Reception requires equipping with Viasat’s Global Aero Terminal 5510 satcom antenna and hardware. The FAA has approved installation of the system, which Gulfstream now offers, by supplemental type certificate.

Powered by twin Honeywell HTF7250G turbofan engines, each rated at 7,624 lb. takeoff thrust, the G280 has a maximum range of 3,600 nm at long-range cruise speed of Mach 0.80, and a high speed of Mach 0.84. It features the Gulfstream PlaneView 280 flight deck, which is based on the Collins Aerospace Pro Line Fusion integrated avionics system fronted by three large-format (15-in.) high-resolution displays.

Departing at maximum takeoff weight MTOW (39,600 lb.), the G280 needs 4,750 ft. of runway in ISA sea-level conditions. The G280 boasts the highest thrust-to-weight ratio of all Gulfstream aircraft and is known for its excellent climb performance; according to OGARAJETS’ Aaron Smelsky, it is common for the G280 to fly directly to 43,000 ft. at MTOW up to ISA+15C.

Capable of seating 10 passengers, the G280 typically carries four passengers with full fuel to maximum range. “While this is not the highest figure in the [super midsize] category, the benefit of the aircraft is its efficiency,” says Smelsky. “No matter how you load it (i.e. two passengers or 10), under the same conditions it will almost always out-fly any of the other super-mid aircraft due to its fuel efficiency.”

Operators have said they budget $2,400-$2,500 for all-up operating expenses. Foster observes that super midsize jets generally cost within $100-200 an hour of each other in terms of direct operating cost. Among its closest competitors, the G280 bests the Bombardier Challenger 350 on range (3,600 nm vs. 3,200 nm) and is priced considerably less overall than the longer-range Dassault Falcon 2000LX, he notes.

As with other Gulfstream jets, the G280’s basic maintenance is scheduled in 500 hr. and 12-month intervals. The 8C/96-month inspection series is the most comprehensive of the packages.

From the passenger standpoint, the G280’s pressurization system maintains a low cabin altitude of 7,000 ft. The cabin is lit by 19 large oval windows, four more than the predecessor G200, and is reputed to be one of the quietest in the super-midsize category. Smelsky, who has worked for the manufacturer, points out that the G280 and its larger sibling, the G650, were the first two jets that Gulfstream developed from the beginning using its acoustic test facility in Savannah.

“They redesigned the air conditioning and duct work to make the ECS (environmental control system) the quietest,” said Smelsky. “Now, when you turn the gaspers on, you do not hear them. They even went as far as to test the stitch patterns on their acoustic curtains to see which one had better noise attenuation. Gulfstream went to all lengths possible to make the cabin as quiet as possible.”

The finished cabin height of the G280 is 6 ft. 1 in. While the raised seating platform provides the widest aisle, it can give the appearance of a dropped aisle, which may be a drawback for some buyers.

“Once you’re seated, you’re in a very solid position to looking out the windows—you don’t notice it,” said Foster. “When you move out of that seat and transition into the aisle you then have 6 ft. 1 in. of head room, which is a nice bit of clearance in the airplane.” 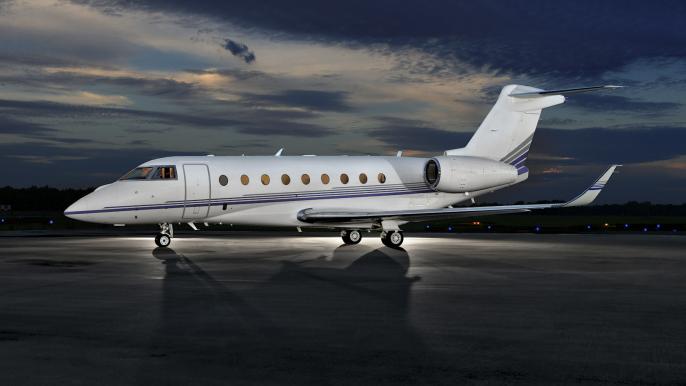