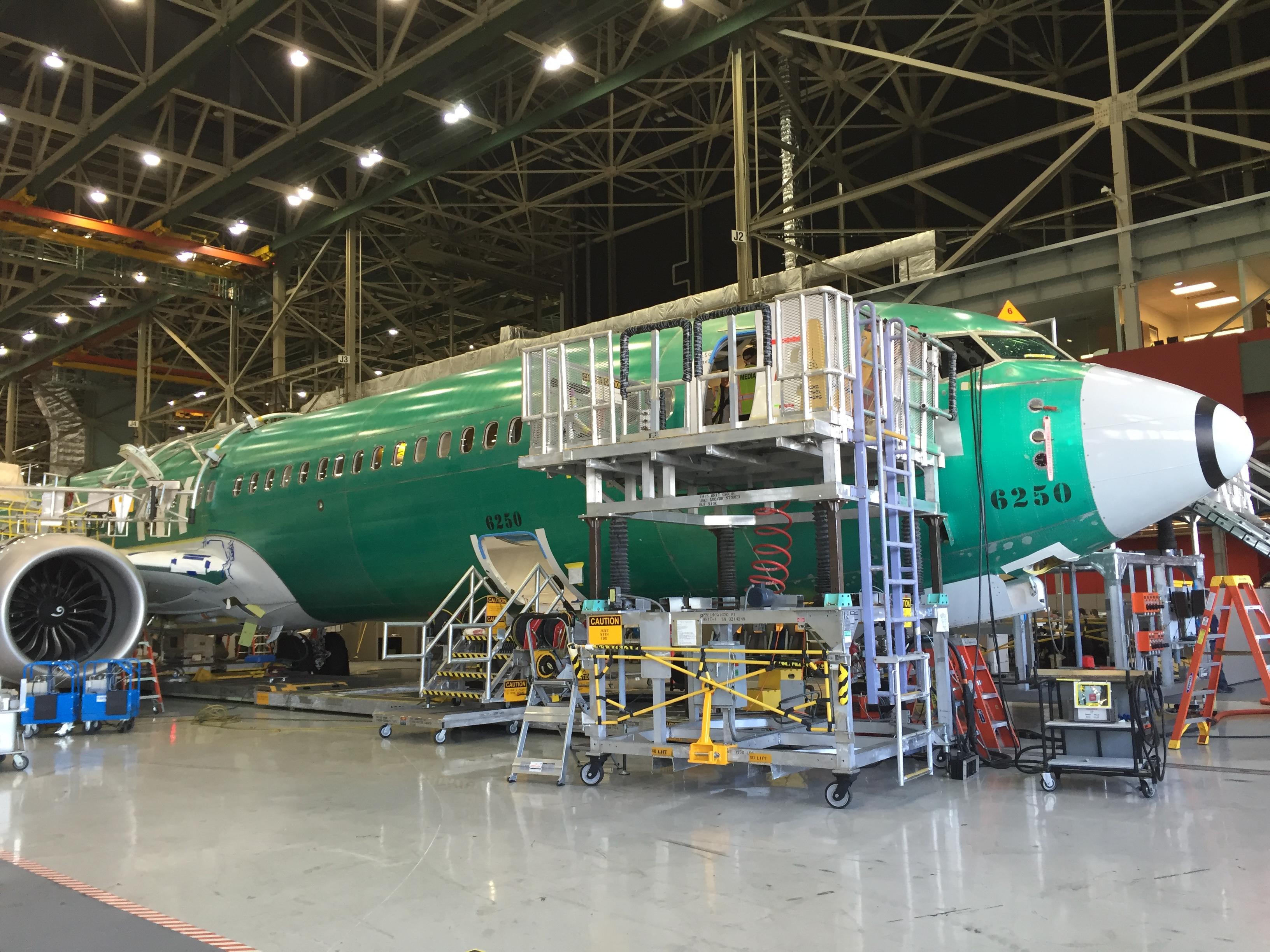 The first 737-9, line no. 6250, is positioned at the end of the dedicated MAX central assembly line in Renton, Washington, where it is undergoing completion prior to moving to the paint hangar. The starboard wing for the second 737-9, complete with winglets painted in the colors of launch operator Lion Air, is pictured prior to mating with the fuselage. Lion Air became launch customer for 737-9 with an order for 201 in February 2012. Note the extended spoilers, which are controlled by fly-by-wire on the MAX. 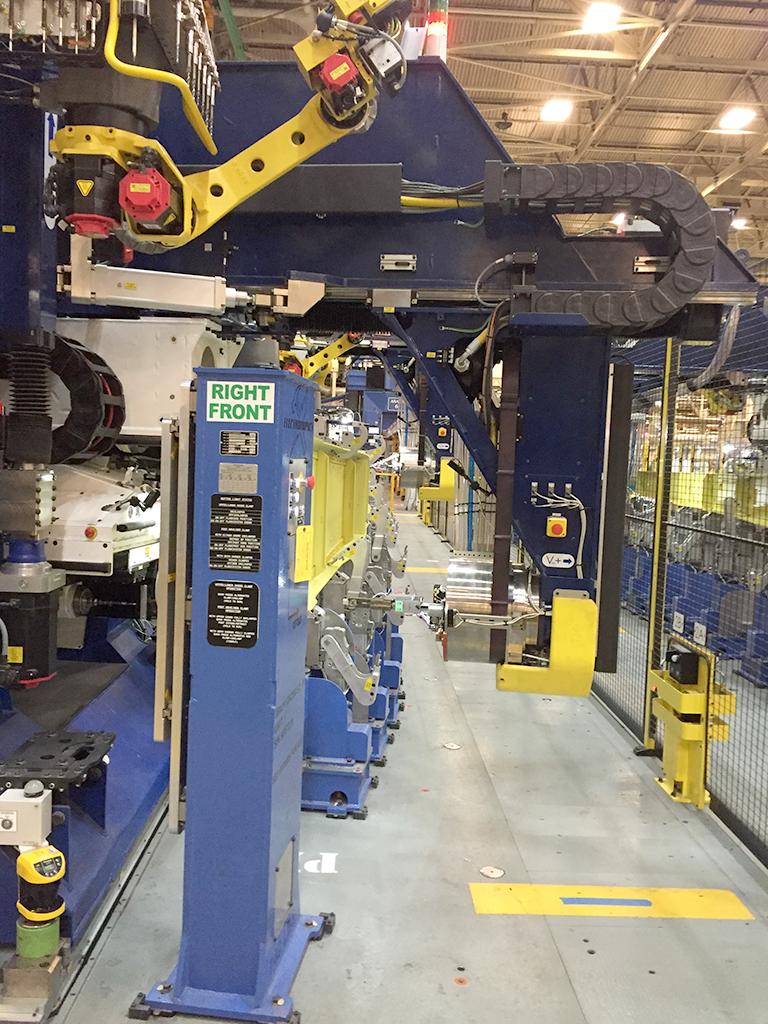 Boeing’s push to automate wing manufacturing at Renton is moving to the next phase with the introduction of the spar assembly line (SAL).

Two SAL cells, each containing four robotic drilling machines, are replacing less efficient automatic spar assembly machines introduced in the mid-1990s with the development of the 737NG. The SAL reduces machine footprint by 80% while increasing throughput by 33%—two key aspects of the drive to accelerate production to 47, 52 and 57 aircraft per month in 2017, 2018 and 2019, respectively.

The first production spars were processed through the SAL in the third quarter of 2016 and will be up and fully running by the end of 2017. The SAL follows the introduction of the panel assembly line (PAL), an automated system developed by  automated manufacturing specialist Electroimpact based in Mukilteo, Washington.

The introduction of the PAL process builds on the shift to the horizontal build line for the 737 wing, which came in 2012 as part of the longer term rate increase from 35 aircraft per month to 42 per month. The horizontal buildup system, which replaced the traditional system of drilling and fastening in static vertical jigs, also introduced automated machines made by Electroimpact and sped up the wing build lower skin assembly process by 35%. 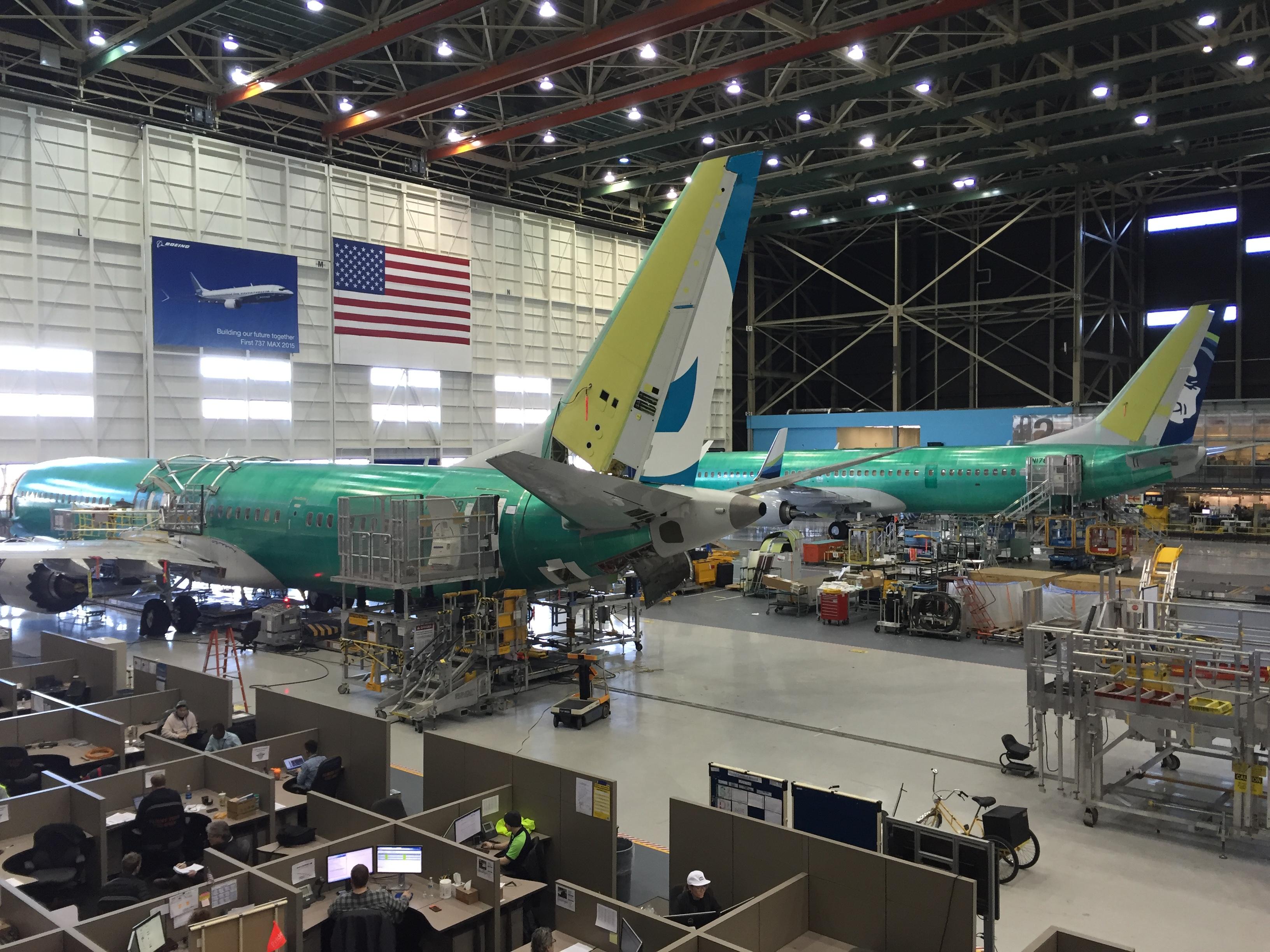 The difference between the low-drag tail cone of the 737-9 and the standard aft section of the current production 737 is pictured in this view of the first stretched MAX with a new -900ER for Alaska Airlines on the adjacent assembly line in the background. 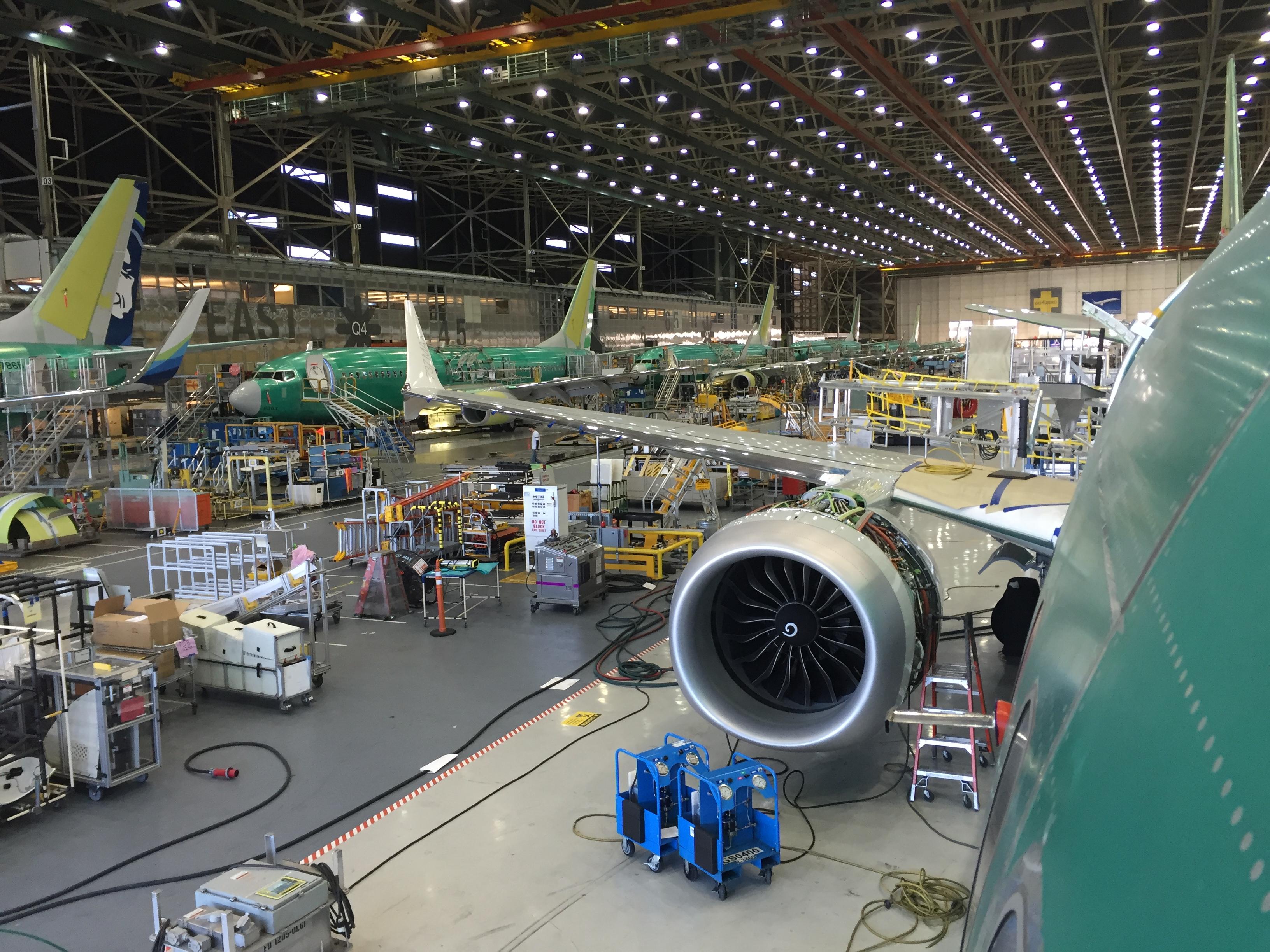 To ensure adequate ground clearance and minimize interference drag, the CFM Leap1B is cantilevered ahead of and slightly above the wing. 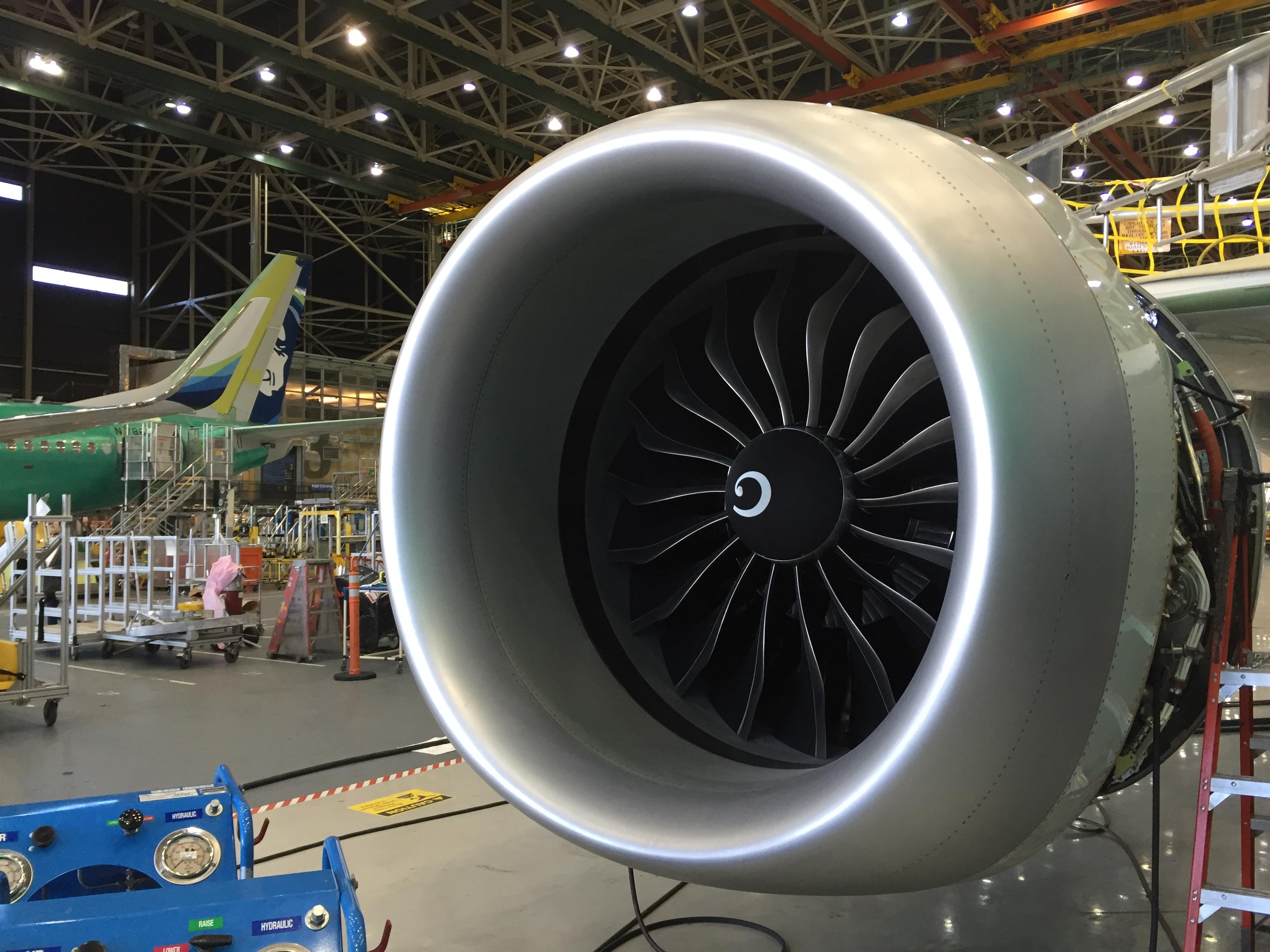 Inspired by the pioneering use of a similar feature on the 787 for drag reduction, the laminar flow lipskin for the MAX’s CFM Leap 1B engine nacelle is made from a one-piece, spun-formed sheet of aluminum supplied by GKN Aerospace.

<p><em>Boeing is close to unveiling the 737-9, the second member of its new CFM&nbsp;Leap-1B-powered MAX family. The first aircraft is set for rollout at the end of the month and will likely make its first flight in April. The test and certification program will involve just two aircraft and is expected to last nine months compared to almost 13 months for the 737-8.</em></p>