Got To Keep The Customer Satisfied

It’s the acid test, isn’t it? You’ve selected and acquired the aircraft, had a comfortable cabin designed, probably added WiFi and connectivity, and now all it needs is the approval of your passengers.

The situation is arguably heightened when the aircraft selected is among the newest in the market, as with the new generation of crossover narrowbody jets such as the Embraer E-Jet E2 family and the Airbus A220 pairing.

airBaltic has gone through the experience when being the launch operator of the A220-300. Since putting the type into service in late 2016, the carrier has received plenty of feedback from passengers regarding the comfort, facilities and overall flight experience on the aircraft, as Alise Briede, airBaltic’s head of corporate communications, reports.

“Every airBaltic passenger can experience the higher comfort level provided by the Airbus A220-300 fleet. It offers excellent flying experience with benefits for passengers such as wider seats, larger windows, more hand luggage space, and improved lavatories, among others,” Briede remarks enthusiastically. “The feedback we receive from passengers is overwhelmingly positive. If we look at revenue data from 2018 or 2019, we see that advanced seat reservation was especially popular on the Airbus A220-300. With the larger windows, window seats are the most popular selection among passengers.

“Even today, when the new aircraft have been in service for more than four years, we still receive positive messages on social media about the new aircraft at least a few times each month. Even more feedback that is positive is expressed to our crew [verbally], which we have no way of keeping track of,” Briede adds.

Launch operator for the A220-100, Swiss, is equally upbeat about its feedback from passengers. “The A220 is very popular from the customer’s viewpoint and we receive very positive customer feedback,” states Michael Stief, spokesperson at the airline.

Mehdi Guenin, corporate communications spokesperson at Helvetic Airways, says the most common feedback from its passengers regarding the airline’s Embraer E190-E2s is the impression of space in the cabin, which he notes is not necessarily “a given” for this size of aircraft. “The optimization of the living space was achieved by redesigning the windows, seats and luggage compartments (to make it feel 90% more spacious). All this make the cabin feel larger and brighter,” he comments. 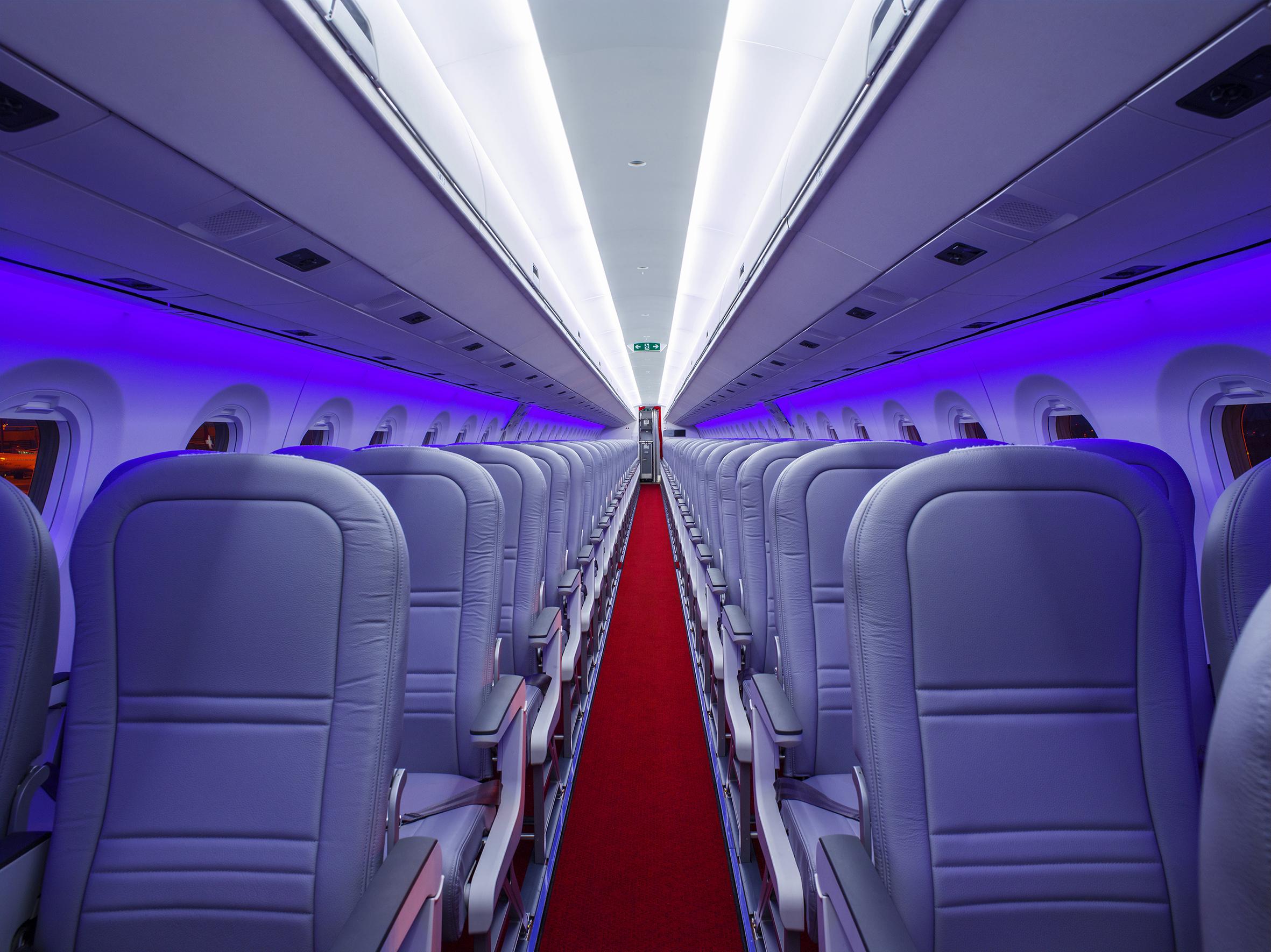 “Secondly, the 2+2 seat rows – avoiding the middle seat and guaranteeing a much faster boarding and disembarking than with a competing aircraft in 3+3 or 3+2 configuration – are a huge advantage and widely appreciated. As an extra little plus, each seat has a USB connection, which is very much appreciated.

“Another major cabin comfort improvement – the silence,” Guenin enthuses. “This has been achieved thanks to the engines of Pratt & Whitney’s PurePower family. This new generation of powerplant reduces noise and makes the cabin quieter.”

It’s one thing to have your own aircraft reviewed, but sometimes it’s good to have customers benchmark against other types (current or previous) either within your own fleet or against those of other airlines. The responses are not always about comfort.

“What concerns us at the moment are the data related to sustainable development, for example regarding the consumption of kerosene,” says Guenin. “As a passenger, knowing that the aircraft you are sitting in consumes between 20% (E190-E2) and 25% (E195-E2) less fuel per trip also contributes to a positive flight experience. More and more passengers want to know if the plane they are going to fly on is environmentally friendly or not. It seems that another competitive advantage is emerging here.”

As for comparisons against other types at airBaltic, or even if the passengers realise the size difference of the A220-300 versus an A320 or 737, Briede says the airline takes a different approach. “Considering that passengers usually base their decision on a future trip on the overall experience they’ve had with a specific airline, airBaltic has not directly asked its passengers to compare their experience on different aircraft types. Instead, the company is focusing on improving the passenger experience from flight search and booking until arrival at the desired destination,” she comments, but also adds, “We have actively communicated the benefits of the new aircraft – which include size and range – which have enabled the company to fly from Riga directly to such destinations as Dubai or Tenerife.”

Similarly, Michael Stief reports that Swiss does not “explicitly ask about differences between airlines, but we do ask our customers about their general satisfaction, from the overall appearance of the cabin to the feeling of space or the condition of the cabin interior”. As noted earlier, the feedback in those areas is positive.

Referring to comparisons of aircraft types, however, Stief remarks, “We do see a higher satisfaction with the cabin overall, but also with respect to feeling of space, when our customers travel on the A220 in comparison with the A320 or A321.”

According to Helvetic’s Guenin, passengers realize the difference between the E190-E2 and the mainline narrowbodies mostly on the tarmac or at the gate when boarding. “There you can still compare the size with other aircraft parked nearby,” he explains. “However, once inside, passengers are always pleasantly surprised to see how spacious the Embraer E2 is.”

Naturally, all these carriers want to ensure that their passenger feedback relates to recent efforts to satisfy their customers, so surveys need to be as current as possible. That has not been easy over the past year.

“During pre-Covid normal operations, this was a continuous process,” Guenin recalls. “With the Covid-19 crisis and the reduction of our flight operations, we have temporarily stopped quality surveys, mainly for reasons of sanitary regulations. However, with the gradual increase in demand, Helvetic will soon resume this type of survey, here again in compliance with health standards.”

At Swiss, the process remains ongoing according to Stief. “We send out customer satisfaction surveys on a daily basis to have a detailed picture of customers’ perception on a regular basis,” he confirms.

airBaltic, meanwhile, employs a two-pronged strategy. “The company performs a thorough survey and measures the customer satisfaction rate on an annual basis. It measures satisfaction with different service components among different passenger groups,” Briede reports. “In addition, post-flight customer satisfaction surveys are sent out to all of our passengers after each flight. The survey measures overall net promoter score based on 10 different areas.”

Crossover narrowbody jets have established a positive position for themselves in the eyes of the passengers. Now the challenge is for the OEMs to get more of them into the market – a challenge which has certainly changed in the post-pandemic era.