When you’re trying to get serious traction in the most mature aviation market in the world, having a differentiating factor is important. Crossover narrowbody jets (such as Embraer’s E-Jets and Airbus’s A220 pairing) have been using their distinguishing factor – the ability to create new city pairs – across North America, the mature market in question, for some years.

The first generation of E-Jets led the way with JetBlue Airways operating them as a second type to its A320s. The battleground currently is between the A220 family and the E-Jets E2 family and it’s fair to say the former has been faring better in North America. Embraer, though, has a breakthrough on the horizon with Porter Airlines in Canada set to introduce the first E195-E2s into region.

Daniel Galhardo, strategic marketing director, Embraer Commercial Aviation, admits that it is an important step for the company and the E2 programme to introduce the E195-E2 into North America. “Porter is an ambitious airline with big plans for their future. We could not be happier that they identified the E195-E2 as the right equipment to transform their airline and their business,” he declares. “Porter Airlines’ E2 fleet will demonstrate the value the E2 delivers commercially, as well as living up to Porter’s promise of an effortless and refined travel experience.” 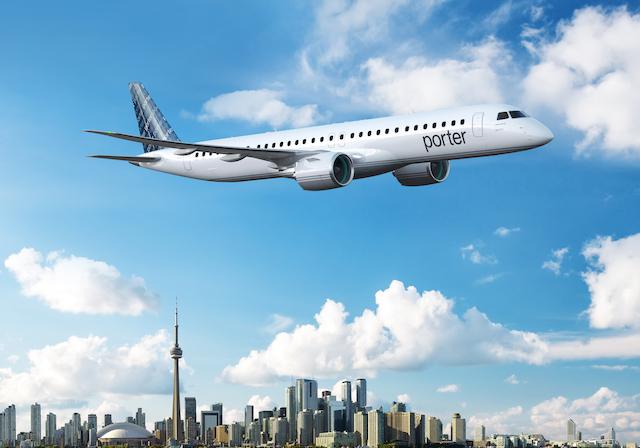 In fact, Porter has just deepened its commitment to the aircraft. An order for a further 20 was announced at the 2022 Farnborough Airshow, raising the airline’s orderbook to 50 before the first aircraft has been delivered. The carrier is scheduled to receive all of the original orders by end of 2023, with those from the new deal to begin delivery in 2024. The airline still has 50 options for the E195-E2.

Full-service carriers (Delta, Air Canada) and hybrid/value carriers (Breeze, JetBlue) have so far been the operators of crossover jets, but the OEMs are hoping that they will eventually break into out-and-out low-fare airline fleets.

“Yes, full-service and hybrid carriers have historically been the business models where crossovers have most successfully operated, and there is no reason to believe that will change – in fact, the pandemic and other external events to the industry may actually increase the importance of the segment for those airlines,” Galhardo remarks.

“That said, we know for a fact that crossover jets, and specially our E195-E2, would be a market-beating addition as an LCC entry-level aircraft given its much lower cost-per-trip for a similar cost-per-seat,” he continues. “That makes even more sense in the current industry environment, where the E195-E2 can deliver both the capacity LCCs need, and the frequencies that build demand. The E2 will be a game changer in the LCC market, but who will jump first?”

Claude Debeauquenne, head of single-aisle market development at Airbus, believes the A220 offers complete versatility to all types of airlines from low cost-carriers to full-service carriers. “Incorporating the latest technology, including in the cabin, the A220 offers exceptional main line service comfort,” he emphasises. “In addition, the A220 shares much of the same design philosophy as the A320 family, making it the perfect complement to the larger single-aisle jets. We see a long future for the A220 in all carriers and fully expect to see the aircraft flying with denser configurations more akin to low-cost carriers.”

Unlike the E2 family, which has the 80-seat E175-E2 in development, neither A220 model was ever really aimed at the regional carriers in North America, potentially giving Airbus an advantage in focusing its marketing on the business models already mentioned. “The A220-100 and A220-300, purpose-built for efficiency and targeting the 100 to 150-seat market, fill the gap between regional and single-aisle aircraft,” Debeauquenne explains. “Whilst the regional market in the US is subject to scope restrictions, this does not detract from the attraction of the A220’s smaller gauge sizes which allow airlines to connect lower density markets that were previously uneconomical.

“The aircraft's performance capabilities can, for example, connect lower demand transcontinental routes that were not operable by a regional jet. In the US, the A220 is highly appreciated for providing non-stop service between underserved routes at affordable fares, offering point-to-point flights from smaller secondary airports, and bypassing hubs for shorter travel times. Overall, the A220 offers versatility with exceptional economics, making it attractive to all carrier types,” Debeauquenne adds.

As noted, many airlines have been reassessing the capacity they need after the pandemic. This could lead to crossover jets winning campaigns that might previously have gone to the larger narrowbodies, as Galhardo discusses.

“The pandemic has made us all realize that pursuing growth at any cost is not sustainable in the aviation industry,” he argues. “Crises and other events that affect air transport demand will naturally happen from time to time, so having the operational flexibility and resilience to cope with this is essential.

“At this point, we believe it is safe to say that airlines have understood that profitability must come ahead of market share. That said, the relevance of crossover narrowbody jets continues to develop – the segment has always been relevant, and many airlines still have them in their fleet, so with the replacement opportunities for those aircraft approaching, upgauging seems like a less attractive option for many,” Galhardo posits.

Debeauquenne remarks that with its widebody comfort in a single-aisle aircraft, high flexibility and a wide range of versatility, the A220 is attractive to all carrier types. He points to four operators in North America (Delta, Air Canada, JetBlue and Breeze) which operate their A220s on 161 routes, which include both short flights such as Air Canada’s Ottawa–Montreal route (100 miles and 45 minutes) and long flights such as JetBlue’s Boston–Sacramento route (2,635 miles and 6.5 hours in the westerly direction).

“More and more, we see our customers like to complement and diversify their fleet with the A220. US based customers like JetBlue are operating a mix of A320 neo, A321 LR and A220s,” Debeauquenne notes.

The expectation from the OEMs for crossover narrowbody jets in North America is clearly positive. But there is an outlier.

While Embraer has planted its E2 flag in Canada, it still has to pick up a sizeable US order. It does, however, have the potential for regional carriers – where the E175 is dominant – to upgrade to E175-E2s should there be any changes in pilot scope clauses. Those have not changed for quite some time though and many observers do not expect that to change in the near future. But never say never.