When discussing aero engines, it’s always tempting to begin by going back to basics with the reminder that without these amazing machines, there would be no air transport industry. You can have all the online booking, frequent flyer programs, airline apps and inflight entertainment systems that you want, but without airworthy engines the airline industry does not exist.

Having once more succumbed to that temptation, taking a look at the powerplants behind crossover narrowbody jets means examining the progress of engines driving a growing market segment. While the 100-seat Superjet 100 and its Powerjet SaM146 engines are still being added slowly in the CIS countries, it is the Pratt & Whitney PW1000G engine family – featuring the Geared Turbofan (GTF) – which is undoubtedly at the heart of the aforementioned growth.

Still relatively new, the PW1500G family on the Airbus A220s and the PW1900G family on the E190/195-E2 pairing have very similar architectures, although there are obviously minor differences for each model on which they fly.

Introducing “game-changing technology” is almost never without a teething problem here or there, and the GTF family has been no different. Nathan Hicks, associate director of communications at Pratt & Whitney, acknowledges this but also emphasises the rectifications introduced and the many benefits the engines have delivered.

“GTF engines for the A220 and E-Jets E2 families delivered or exceeded their performance targets – both in fuel efficiency and environmental impact – from day one. These aircraft have proven economical and versatile, with such significant improvements over the aircraft they replace,” Hicks reports. “With more than 8.5 million flight hours across all GTF engines [including, of course, the PW1100G-JM on the Airbus A320neo family], we have taken advantage of cross-platform learning to incorporate continual improvements, rather than a one-time PIP (Performance Improvement Package). These have included, for example, a combustor upgrade for higher durability in harsh environments, which also enable longer time on wing, and improve dispatch reliability – both of which have improved operational performance for our airline customers. This is an ongoing part of our culture.

“We recently introduced a software update for A220 and E2 engines to automate an engine speed restriction, reduce pilot workload and alleviate current engine inspection requirements,” Hicks adds. “To relieve this speed restriction entirely, we have also validated new hardware, which we estimate will be available to new and overhauled engines before the end of the year.

“We are excited by the rising popularity of both the A220 and E2 families. With unmatched low fuel burn and emissions, both fleets helped keep airlines resilient through the immensely challenging coronavirus pandemic. We see these aircraft playing an important role in the recovery, while also setting new standards for more sustainable in air travel,” Hicks predicts, while noting that the GTF-powered A220 fleet recently hit one million engine flight hours of experience.

The Pratt & Whitney PW1524 engine entered revenue service with SWISS on the A220-100 in 2016. The airline’s spokesperson, Michael Stief, discusses its powerplant performance so far. “Over the past five years, the engine has been showing multiple facets in operation: besides its good overall flight performance and its innovative technical approach of the geared turbofan, SWISS has experienced a multitude of the technical teething challenges which tend to emerge on new-to-the-market technology.

“The technical issues were of varying severity and at times had a significant impact on SWISS flight operations. The rectification plans for some technical issues are long-lasting and are still being worked on at present day,” Stief continues. “In a holistic view, it can be stated that Pratt & Whitney has, at all times, been working in close cooperation with SWISS to manage the various issues on all levels of impact and has provided proper remedies.

“SWISS is convinced that the defined or already implemented remedy actions will be successful, enabling the engine type to reach its intended design goals and achieve highest reliability levels in operation, thus providing the airline the full extent of the undisputable technical and economic benefits of the asset,” Stief concludes.

Global launch customer for the A220-300 was airBaltic, which has now gained more than four years of operational experience with the engine. “Fuel consumption has improved by 21%-23%, when compared with our previous jet and turboprop fleet on our average 2-hour flight sectors,” remarks Alise Briede, the carrier’s SVP corporate communications.

“A few years ago, certain Pratt & Whitney PW1500G series engine systems caused some negative influence on our operations, however, they have been now solved,” she continues. “The other driver for delays and cancellations has been faults caused by different full authority digital engine control (FADEC) elements. Since entry-into-service (EIS), many issues have already been addressed.

“Overall, we see that it has been possible to establish great cooperation with Pratt & Whitney, and we see that they are truly interested in improving the engine. As with any new technology, we had always expected that certain adjustments would have to be made during the initial years of operations,” Briede confirms.

The PW1900G family entered revenue service on 24 April 2018 on a Widerøe E190-E2 flight from Bergen to Tromsø. Also early into E2 operations was Helvetic Airways, which has now been operating the E190-E2 for more than a year and a half. The airline has been an E-Jet E1 operator for many years with the opportunity to follow the E2’s progress and clearly had high expectations for the new generation. 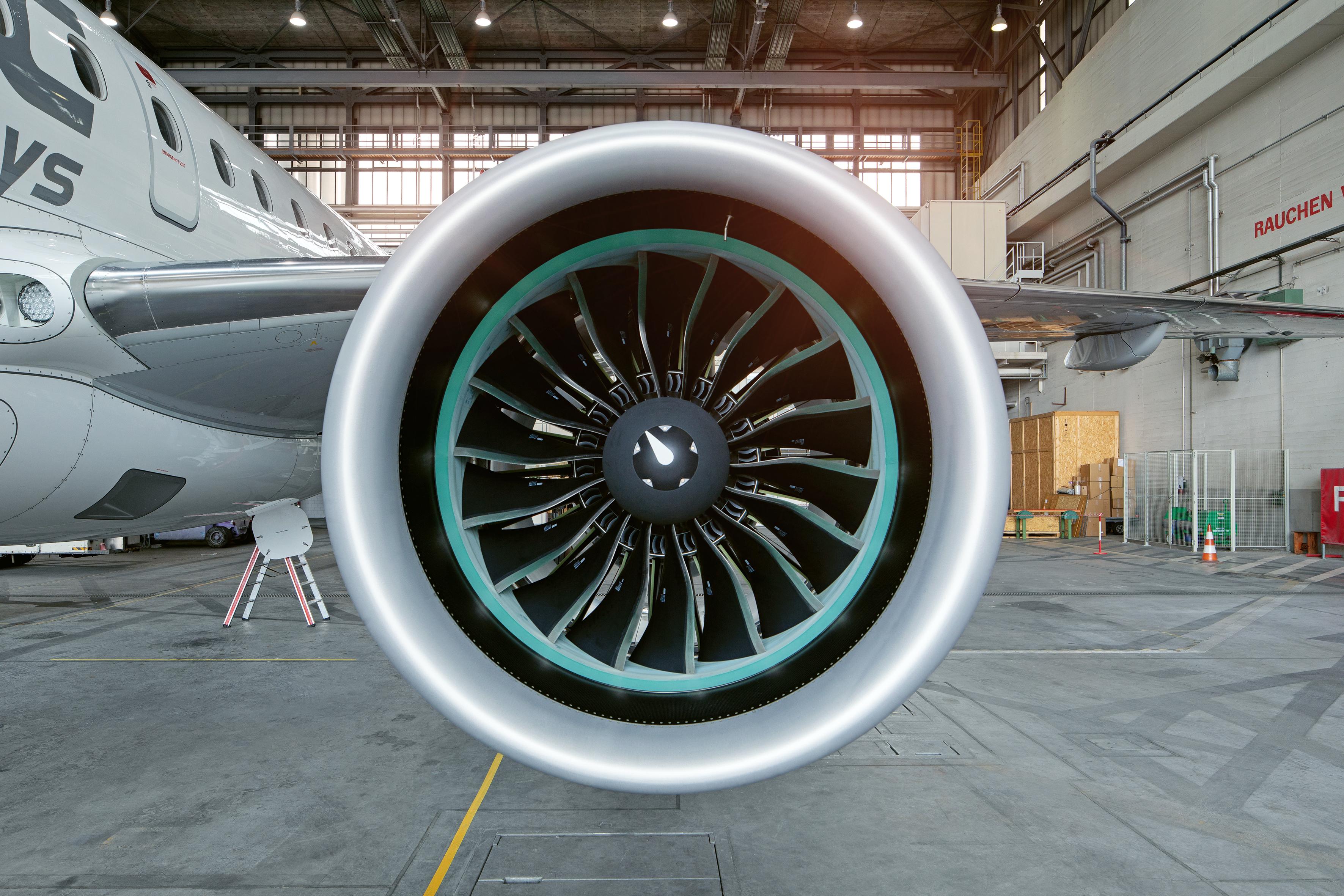 Those expectations have largely been met, including the new engines, according to Mehdi Guenin, the carrier’s corporate communications spokesperson. “Helvetic Airways is absolutely satisfied with the quality of the Pratt & Whitney engines,” he declares. “We have only recorded two AOGs out of hundreds of flights and out of a fleet of eight Embraer E190-E2s which were related to the engine only, so reliability is absolutely in line with our expectations.

“To be comprehensive, two of our engines were removed for a shop visit due to small inspection findings. The events are currently still being investigated by Pratt & Whitney and we are waiting for the final results,” Guenin reports.

The quality of a company is often defined as much by how it responds to problems as the quality of the original product. In Helvetic’s opinion, P&W again ticks the boxes. “The technical support by Pratt & Whitney has been excellent so far. As one of the biggest E190-E2 operators worldwide, we can count on a highly competent and high-performing team here in Zurich, Switzerland. The P&W colleagues are supporting us on all technical matters. They also proactively communicate and inform Helvetic Airways of any developments. In fact, the Pratt & Whitney, Embraer and Helvetic Airways collaboration is absolutely excellent as we prepare for the arrival of our first E195-E2 mid-June,” Guenin states enthusiastically.

Having admitted to the early glitches, there seems little doubt that not only has Pratt & Whitney supported its customers, many original design elements in the PW1500G and PW1900G have performed above specification and benefited operators.

“Since entry into service, the GTF has exceeded expectations in lowering fuel burn and carbon emissions,” notes Hicks. “Airbus A220 and Embraer E-Jets E2 operators have reported fuel efficiency around 20% better than previous-generation aircraft. When JetBlue entered service with its A220-300 on Monday 26 April, it reported [expected] dramatic improvements in fuel burn per seat and direct operating cost per seat.

“The 75% smaller noise footprint produced by the GTF engine has also been noted to have delivered a quieter onboard environment for passengers and crew, contributing to lower noise disturbance at airports and their surrounding communities,” he adds. Switzerland has stringent noise regulations, so both SWISS and Helvetic Airways are benefitting from using these engines.

“At the heart of the geared architecture is the fan drive gear system (FDGS), which has performed flawlessly since entry into service. Before the launch of the GTF, this had been considered a significant step-change and area of risk by industry experts. Through years of extreme testing, the FDGS has exceeded expectations and will be the foundation of our engines today and well into the future,” Hicks comments. “While the FDGS enabled a step change in propulsive efficiency, we see opportunities to continue improving the engine’s thermal efficiency with higher temperatures and more advanced materials.”

It took a concerted effort for Pratt & Whitney to achieve its healthy position in crossover narrowbody jet propulsion, a carefully-planned move to regain ground after missing out on the first generation regional jet market, which was dominated by the General Electric CF34. With the growth of the E-Jets E2 and A220 families, it’s clear that anything aiming to replace the GTF family will have a real fight on its hands.

2 Comments
Paladin
Wed, 05/26/2021 - 14:26
Please define "crossover".
withany
Wed, 05/26/2021 - 21:08
Back in the late 60’s and early 70’s, Austin Airways, which serviced the James Bay/southern Hudson Bay region of northern Canada, flew Canso flying boats (Consolidated PBY Catalinas) and DC-3s. Since the coastal areas where many of the communities are located are marshy, many of the smaller ones had no airstrip, making the Canso a particularly useful craft in the summer. In the winter, or course, flying boats were not very useful as their landing gear wasn’t great for landing on ice/snow strips, so in the winter, the DC-3’s became the workhorses.

Because both aircraft types used Pratt & Whitney R-1830 Twin Wasp engines, the power plants could be switched easily between Canso’s and DC-3’s, simplifying maintenance and providing a ready supply of backup engines. Austin Airways may have been one of the first air services to benefit from an engine crossover capacity.