American Airlines President on Next Steps

American Airlines is balancing short-term needs to keep its operation running with activities to position it for the future.

While it pulled its schedules down 80% early in the pandemic and focused on parking aircraft, American is shifting its attention to “how are we going to build back,” what steps it needs to take “so that, out of the box, reliability is at an all-time high,” and “where do we put aircraft so that they’re ready to go?” said Robert Isom, American Airlines president, during Aviation Week Network’s virtual MRO Transatlantic event.

Its scheduled operations are down about 60% year-over-year.

“Nimbleness and flexibility are key right now,” said Isom, adding that work American is doing now should “put us in a position where we can build back smartly and we can build back based on the kind of demand that we see that warrants the return of flying."

He said the carrier is focused on keeping big hubs such as Dallas/Ft. Worth and Charlotte, N.C. strong and ensuring that resources, including line and base maintenance, are available, but flexible during these uncertain times.

A bright spot from operational downtime is that American has accelerated the completion of its big Spectre maintenance system project, which is one of the last remaining integration projects from the carrier’s merger with US Airways in 2013. Isom said “we are going to be bringing on all of our aircraft onto one system over the remainder of the year,” which should bring efficiency and quality benefits to American’s technical operations.

From a maintenance planning standpoint, having a fleet in flux is a big challenge. However, Isom credited the maintenance team for getting ahead of deferred and planned maintenance work so when the recovery does it happen, he expects the fleet to be ready.

That has been helped by the fact American was in the process of streamlining its fleet before the pandemic and was retiring older aircraft, such as the MD-80, which it last flew in September 2019. Its mainline and regional fleet has “gone from about 50 different configurations and types of aircraft down to just about 20 over the last few years,” said Isom.

One of the aircraft the airline plans to keep in its schedule, the Boeing 737 MAX, could be ungrounded by the FAA in November, says the American executive. “We've positioned all of our 24 Maxes in Tulsa, so that any remaining … AD work that needs to be done can be accomplished fairly quickly.”

American unveiled plans in February for a new widebody facility at its Tulsa, Oklahoma, maintenance base, in addition to other facility upgrades there. Given the grim prospects for near-term international travel recovery, Isom said the timeframe for that widebody facility could slide. “As with all capital investments and the downturn in flying right now, it's something that we do have to take a look at and make sure it fits with the kind of schedule that we will be operating in the future.” However, “we're confident that that is something that we and the city of Tulsa will be able to work on.” 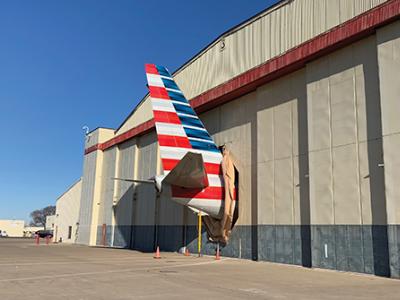 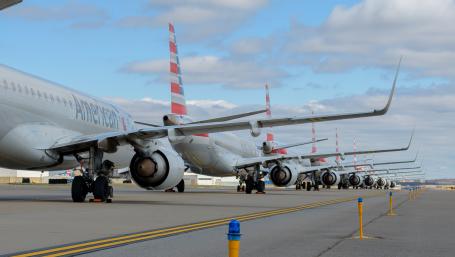