Honeywell’s latest integrated flight deck, Anthem, is designed for the future, with always-on connectivity, growth to autonomy and a smartphone-inspired interface. Billed as the industry’s first cloud-connected avionics, the cockpit system is intended for general aviation and business aircraft as well as commercial airliners, but its launch applications are in a new market for aviation—advanced air mobility.

Compared with Honeywell’s current flight-deck avionics, Anthem is half the size and weight and, through increased hosting of functionality as software applications, will save more than 50% at the aircraft level, says Vipul Gupta, Honeywell Aerospace vice president and general manager for avionics.

Anthem was designed from the outset with connectivity, autonomy and an intuitive touch interface as core tenets. The system is always connected and available to any authorized user—pilot, maintainer, dispatcher and manufacturer—even if the aircraft is parked and not powered up. 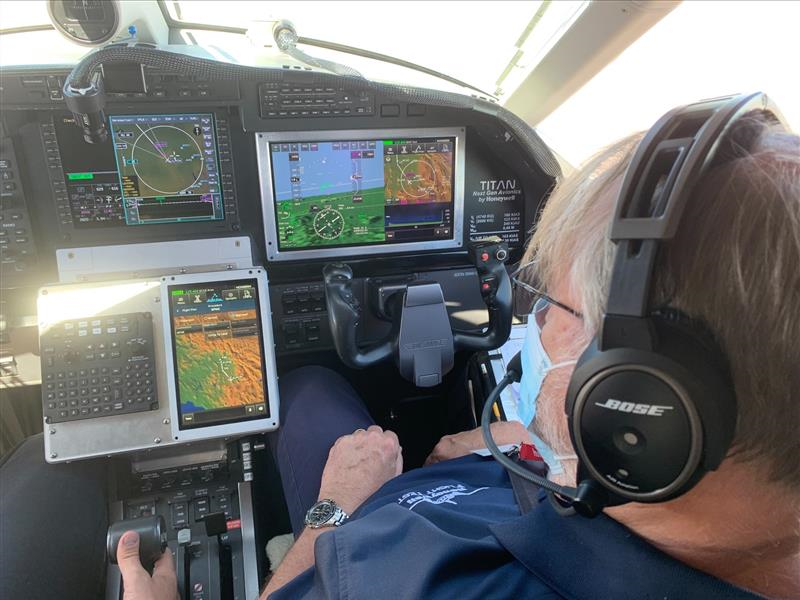 The first applications of Anthem are the seven-seat Lilium Jet and five-seat Vertical Aerospace VA-X4 electric vertical-takeoff-and-landing air taxis. In addition to cockpit avionics, Honeywell is providing its compact fly-by-wire system for both vehicles.

“This is not Epic 3.0,” says Gupta. “This is our next generation of integrated flight deck. It is definitely a transformational change compared to what we do today.”

A company-owned Pilatus PC-12 turboprop has accumulated 100 flight-test hours with an Anthem system installed on one side. The first certification is expected to be on the Lilium Jet, Gupta says. The German startup is aiming for European Union Aviation Safety Agency (EASA) certification and FAA validation by the end of 2024.

Munich-based Lilium announced Honeywell as its supplier of avionics and flight controls in June. Certification planning for Anthem has been underway with the FAA for a year and a half, with “a lot” of packages already submitted and approved, Gupta says. “We started engaging with EASA when we signed with Lilium,” he adds.

A typical Anthem panel layout will consist of 2-4 touch display units, available in different sizes to fit different aircraft. A touch-screen pilot interface display unit replaces the traditional text-based multifunction control display unit on the pedestal, providing pilots with a new way to interact with the flight deck, Gupta says. All are smart displays with large active areas and thin bezels to minimize gaps between screens.

Voice can be used for basic control functions, with transcription of air traffic control (ATC) communications planned as the speech-recognition engine matures, Gupta says. “What we want for single-pilot operation is to reduce the pilot workload drastically. So when you get information from ATC, we can populate some of the key information from that communication straight into a smart scratch pad,” he says. “And then as soon as you select that particular chiclet, the system will tell you where it needs to go and take you there automatically, and then back to the page you were on.”

Anthem integrates with popular electronic flight bag planning applications to let pilots create and transmit flight plans to the aircraft from anywhere. When the pilot powers up the aircraft, the flight plan will be ready. Expected to reduce pilots’ preflight preparation time by around 45 min., this remote flight plan loading is an industry first, Honeywell says.

Anthem is connected continuously to a server on the ground. A secure cockpit browser, which Honeywell likens to Apple CarPlay, allows the crew access to third-party applications and websites running on the ground, such as weather cameras and live radar imagery from the destination airport. “We are running applications on the ground but providing access to those applications through a cybersecurity means and onto the pilot’s front display,” Gupta says.

The secure browser allows cockpit access to applications that cannot yet be certified for onboard use. “Initially, I expect a lot will be about information to the pilot from an advisory perspective, aircraft manuals and other things,” he says. “Maybe it is the OEM’s application, maybe there’s something else they want to do. We’ll work with them on what applications they want to bring to the cockpit. But it allows those applications to be hosted on the ground and provides an interface into the airplane.”

Anthem’s architecture is based on distributed processing modules, each with four processing cores. These are nodes on an Ethernet communications network. The powerful multicore processors will be certified to host safety-critical avionics applications. “We have included technologies that enable us to plan for the future, such as gigabit Ethernet with time-triggered Ethernet planned,” Gupta says.

“Rather than having a big-cabinet approach, we have distributed processing modules that can be installed in various airplanes without the need for active cooling,” he says. “With that, we can reduce installation time and make installation easier and more flexible for OEMs. They don’t have to reserve a big cabinet somewhere where they can put all of the big boxes.

“We have also created a tool to allow OEMs to develop software applications and host them on the platform,” Gupta says. “This way they do not have to rely on bulk upgrades but can field updates on a short cycle time.”

An onboard integrated network server unit (INSU) provides two-way connectivity to the outside world. The system is “pipe-agnostic,” and can use high- or low-speed satellite communications, cellular LTE, Wi-Fi and short-range Bluetooth. The INSU provides cybersecurity up to assurance level 3, Gupta says. This provides protection against intentional violation using sophisticated means.

“Two-way connectivity down to everything, particularly in the flight deck environment, is still not as pervasive as we’d like it to be,” he says. “We are providing connectivity that is always connected, always available, not just for the pilot, but whoever needs to use that information in the ecosystem. It can be maintenance, dispatchers, even OEMs who want information from the aircraft for support purposes.”

The INSU collects and stores the avionics data on the network. Even when the aircraft is parked and powered down on the ground, the unit can use battery power to connect via cellular communications and provide the data to authorized offboard users.

Separately, Honeywell has worked on a “connected FMS” concept in which a certified flight management system (FMS) on the ground draws flight-relevant data from the cloud, then uploads it to the onboard FMS. Gupta suggests a connected FMS capability is a consideration for Anthem.

“We have a flight management function that will be running on those distributed processing modules,” he explains. “I expect in the future that the ‘connected FMS’—flight planning, routing, all of that information—will come from the ground. But there will be times when you need the onboard FMS capability, and we are providing that as well.”

“Even if connectivity is lost for some reason, that onboard FMS function can continue providing information regarding the performance of the vehicle,” he says. “It is crucial to have that FMS software on board, but no longer the hardware.”

The same Anthem architecture will scale all the way from urban air mobility (UAM) vehicles to transport-category aircraft. “The number of modules will be different and the size of the displays, the processing capabilities, will be different,” Gupta says. “For example, the UAM vehicle with a smaller display size will only have so much graphics processing capability, but a large business jet will have a lot more.”

“We have architected the system in such a way that we will meet all of the requirements around catastrophic failure levels and the redundancies required for Part 23 or Part 25 or Part 27,” he adds, referring to general aviation, transport category and rotorcraft certification categories, respectively. “We’re bringing the system down not just to big business jets, but to smaller general aviation airplanes and the advanced air mobility market.”