There is increasing talk of 100% sustainable aviation fuel, up from the current 50% blend limit. But it is not as simple as just pouring more biofuel into the tank.

Sustainable aviation fuels (SAFs) have been a technical, if not yet economic, success because of the decision taken at the outset to develop fuel blends that could be approved as drop-in replacements for conventional petroleum jet fuel, requiring no changes to aircraft or engines.

A SAF is a blend of a synthetic component and a conventional component. To ensure that the resulting partially synthetic Jet-A/A-1 can be a fleetwide drop-in replacement for fossil kerosene, the proportion of synthetic fuel in the blend is limited to a maximum of 50%.

So far, seven SAF blends have been approved by industry standards developer ASTM International. Many more are in the testing and approval pipeline. The vast majority of fuel produced and consumed so far is a synthetic paraffinic kerosene called HEFA (hydroprocessed esters and fatty acids), produced from animal fats and vegetable oils such as used cooking oil.

HEFA can reduce life-cycle carbon emissions by as much as 80% compared with conventional jet fuel, but it is limited to a 50% blend as a drop-in fuel, so the maximum achievable reduction is 40%. This is because HEFA lacks the aromatic hydrocarbons that are present in fossil jet fuel and are required for compatibility with fuel seals. 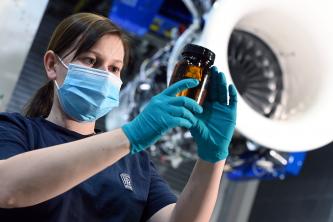 Work is under way to determine the changes required to make aircraft and engines compatible with 100% SAF, so as to maximize the life-cycle carbon savings from fuels that are likely to always be more expensive than conventional jet fuel. The focus is on 100% HEFA, because of its availability, but some of the other SAFs already approved or under testing have the potential to reach 100%.

There is nowhere near enough SAF available to reach 100% usage any time soon, but the effort now under way is looking to the future and the expectation that SAF production will have been scaled up from a few million gallons in 2020 to several billion gallons annually by 2030.

Flying on 100% SAF is not new. Canada’s National Research Council (NRC) conducted the world’s first civil flight on 100% biofuel in 2012, with its Dassault Falcon 20 test aircraft. There have been other such flights since then, including a GE F414-powered Saab Gripen fighter in 2017 and a GE90-powered Boeing 777F in 2018. But the pace has picked up in recent months.

The momentum is building. In April, Williams International flew its FJ44-4 turbofan on 100% SAF on a Cessna Citation CJ4. This engine also powers the Pilatus PC-24. And it is not just turbofans that are being tested. In September, Safran ran 100% HEFA in its Makila 2 turboshaft, which powers the Airbus H215 and H225 helicopters. And early in 2022, ATR and Swedish BRA plan to conduct a 100%-biofuel flight test of a Pratt & Whitney PW127-powered ATR 72 regional turboprop.

Business jet manufacturers also are getting onboard. Dassault Aviation is participating in a French government-funded research project called Volcan, under which Airbus and Safran will measure the inflight emissions from a CFM Leap-1A-powered A320neo flying on 100% SAF. Flights are planned at the end of this year. Dassault will study the compatibility of materials and equipment with 100% SAF and the susceptibility of neat biofuel to biocontamination.

Gulfstream, meanwhile, will provide insight on the business aviation industry as part of a project led by SAF startup Alder Fuels and funded by the U.S. Energy Department. The goal of the project, which also involves United Airlines and Boeing, is to create a 100% replacement for jet fuel with negative life-cycle carbon emissions when produced from miscanthus grass grown using regenerative agriculture/land management practices intended to rebuild the soil and increase carbon sequestration.

The challenge ahead is that not all SAF pathways can produce a 100% synthetic fuel that is identical to fossil Jet-A/A-1. Of the seven approved so far, only two have the potential to produce a fleetwide drop-in fuel at 100%. Another four or five are in the approval pipeline, however. But first, a new specification for 100% drop-in SAF must be developed, an effort that has begun.

Another four approved pathways have the potential to produce a non-drop-in 100% SAF, but these would be limited to designated aircraft/engine combinations and would not have fleetwide compatibility, which could introduce logistical challenges with fuel supply. SAF, initially in blends up to 50% but eventually 100% pure, remains the main hope for aviation sustainability.