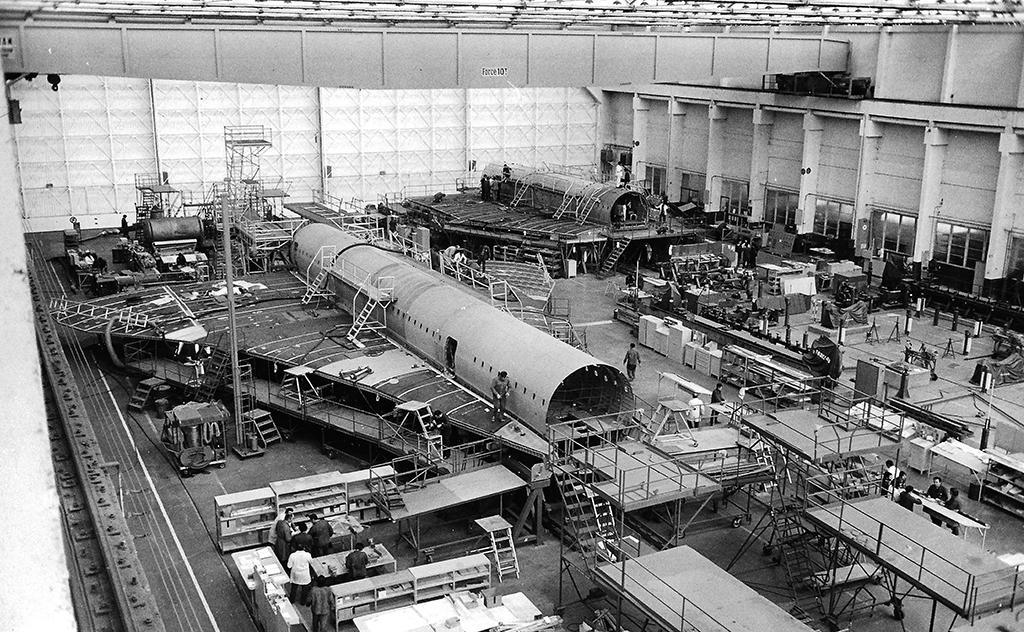 Facing huge development costs, the British and French governments began to explore international co-operation for the design and construction of a supersonic airliner capable of trans-Atlantic range. 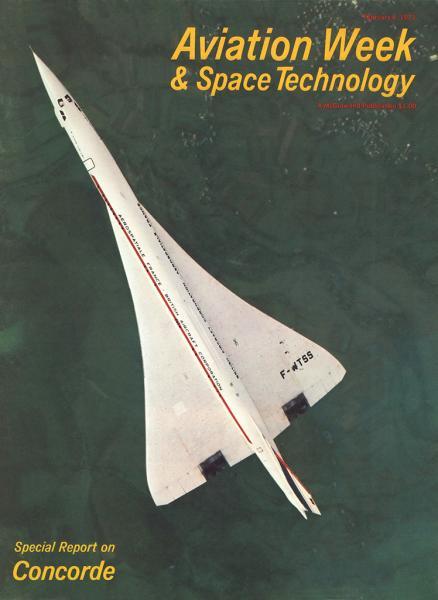 Formal approval of the Anglo-French supersonic transport project was given governmental consent in November 1962 and marked the start of a more than 13-year journey to service-entry. The design and creation of the Mach 2.2 Concorde would prove to be technically and operationally challenging – particularly when it came to marketing the aircraft to international airlines. 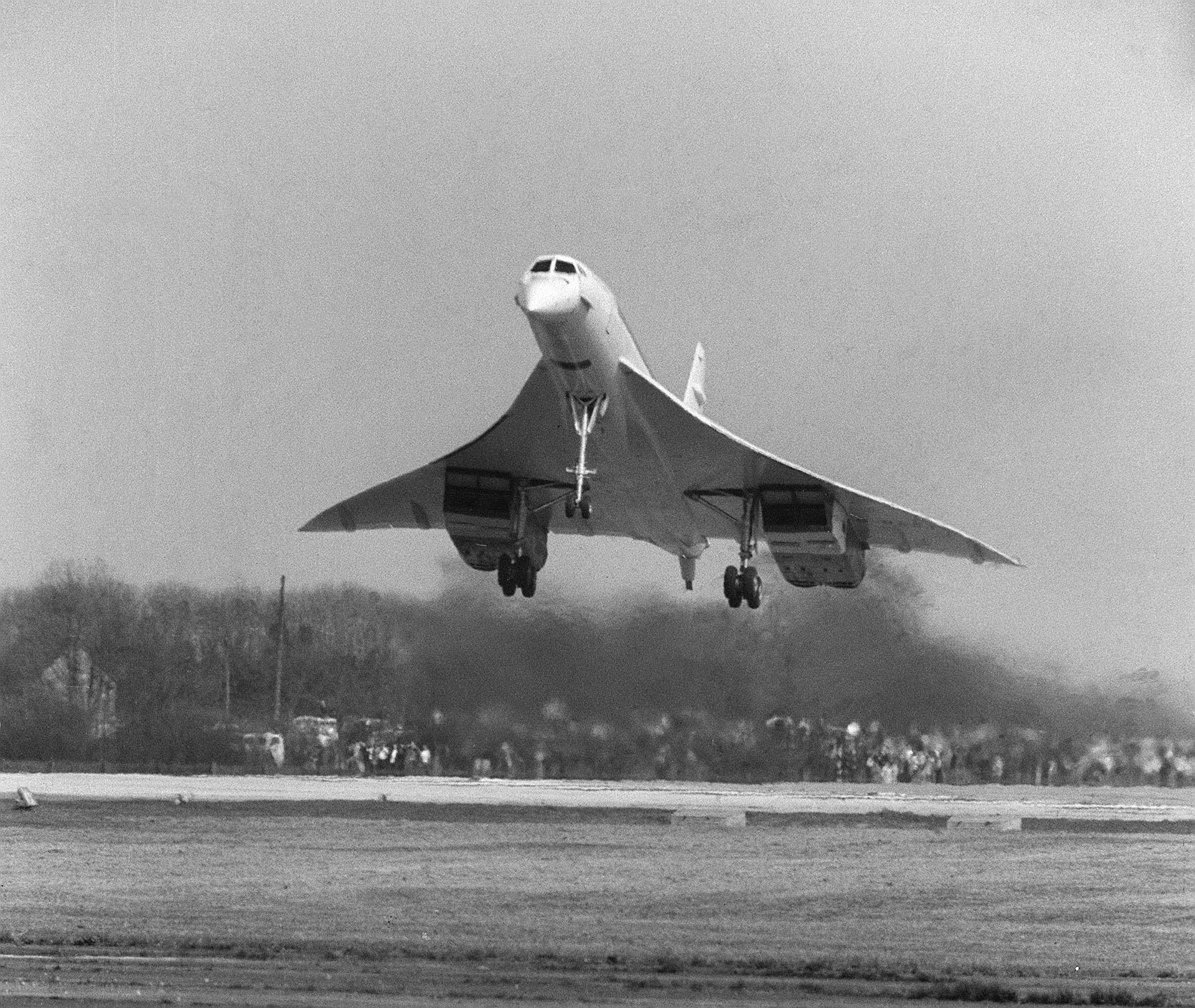 The first prototype, Concorde 001, made it first flight from Toulouse, France, on March 2, 1969. Two duplicate production lines were established for the program with 001 assembled by Aerospatiale in Toulouse, and 002 – which flew on April 9, 1969, built by BAC in Filton, England. 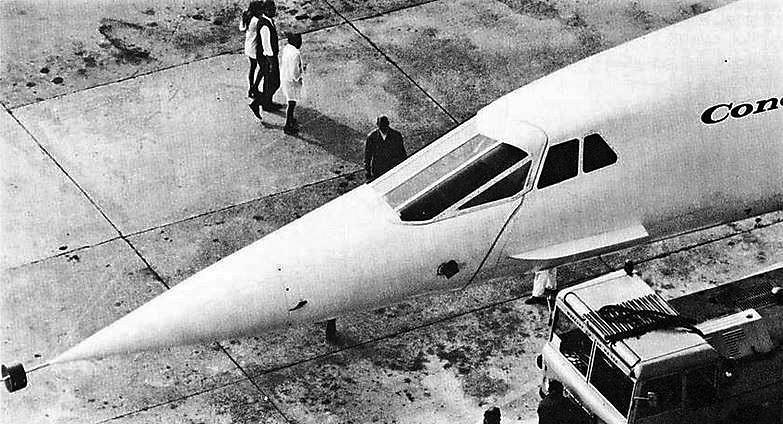 Both Concorde prototypes were displayed to the public for the first time at the 1969 Paris Air Show – taking a break from a hectic flight test effort that included sales and demonstration tours. These would include the first crossing of the Atlantic by 001 in September 1971. When it finally entered service in 1976, Concorde would be one of the most thoroughly tested transport aircraft in commercial history. 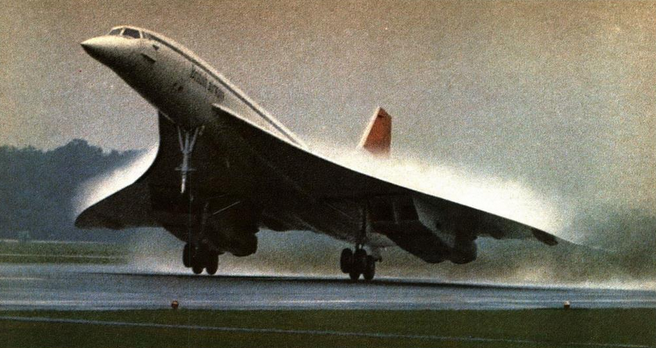 On Jan 21, 1976 the Air France and British Airways Concordes took off from Paris’ Charles de Gaulle and London Heathrow airports at 12:40 p.m. GMT after a 30-second countdown by both pilots. The flights took off simultaneously with the London flight headed to Bahrain, and the Paris flight to Rio de Janeiro via Senegal (AW&ST Jan 26, 1976, p.36)

On February 7, 1996 Concorde broke the record for the fastest time to fly across the Atlantic in 2 hours, 52 minutes and 59 seconds. At the time, AW&ST reported that Concorde was set to fly well into the next century (AW&ST Feb. 12, 1996, p.39) after it celebrated 20 years of service in January 1996, but within seven years the transport had been retired. 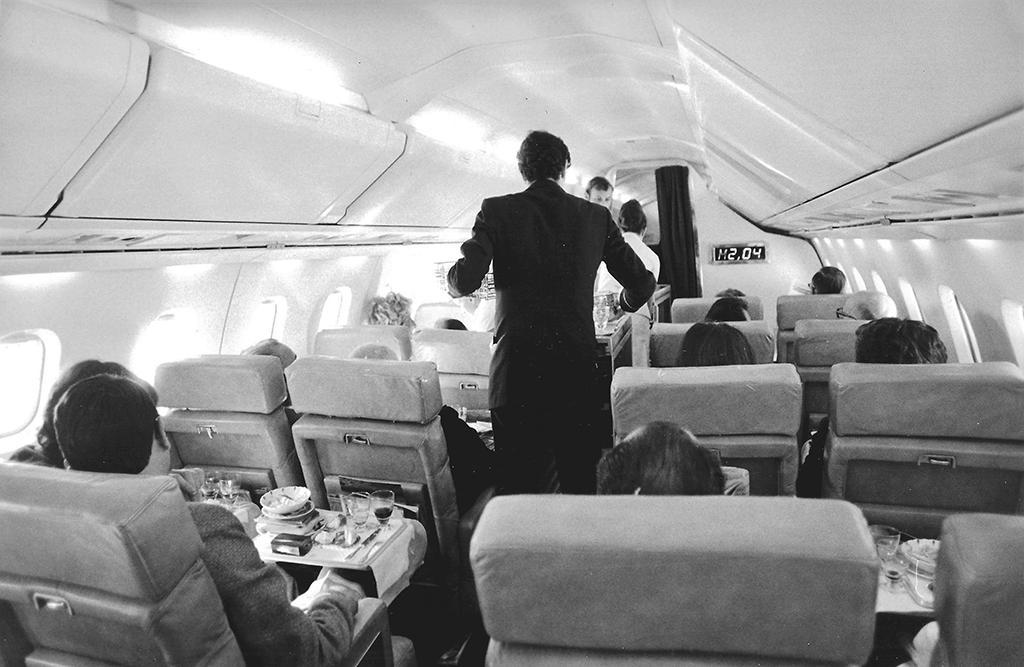 On October 24, 2003 the planned cessation of all Concorde flights brought about the end of an era (AW&ST Oct. 20, 2003, p.86). There was a festive mood on the final flight, with Aviation Week Editor-In-Chief David M. North enjoying one of the seats. Festivities included a 70-year-old woman who spent $8,400 plus for the business class return seat as a birthday present to herself, and a Delta Airline pilot proposing to his girlfriend onboard. 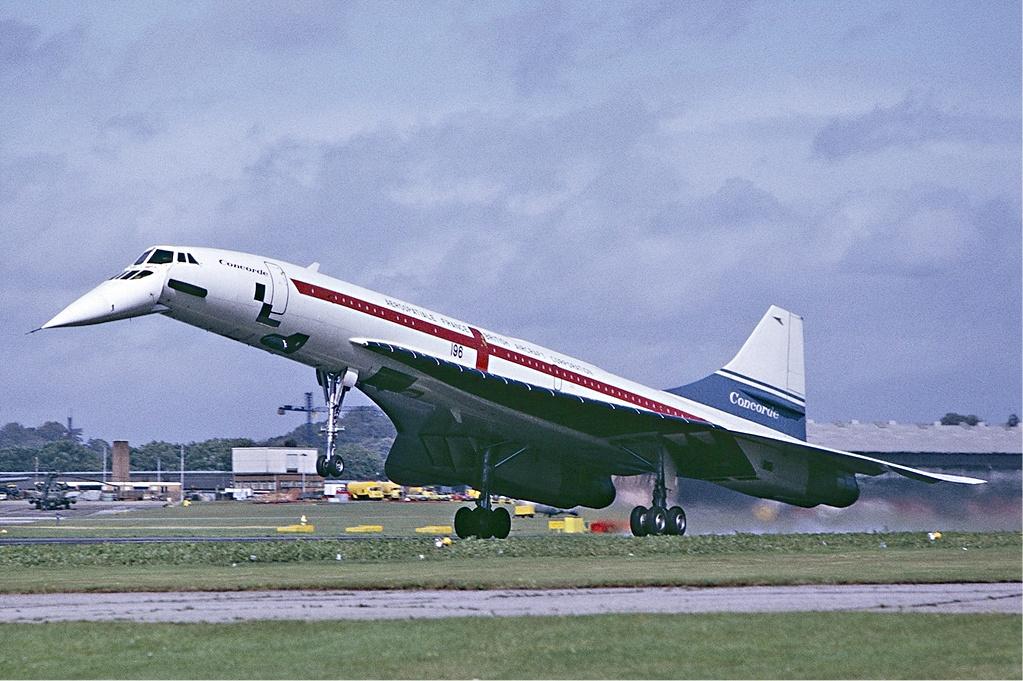 Although a commercial failure with only 20 Concordes ever built, including 6 development aircraft, the program was described as a technical triumph. The supersonic dream finally succumbed to commercial pressures following the crash of an Air France aircraft in July 2000 and the collapse in air travel following the 9/11 terrorist attacks on the U.S. 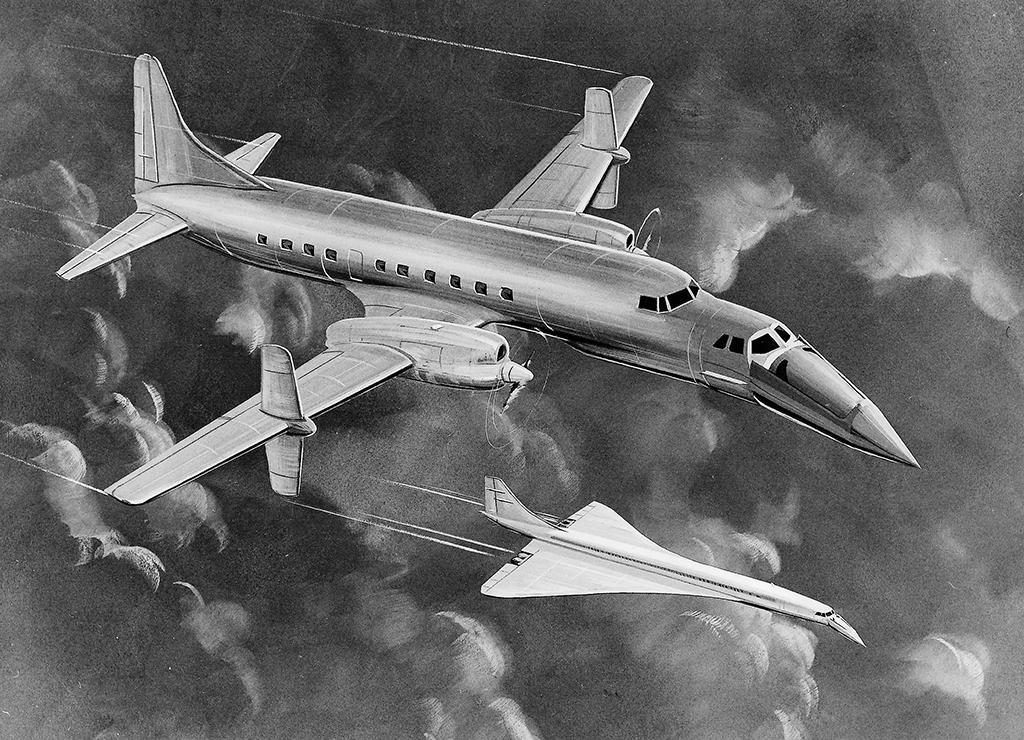 An early mockup of the Concorde original variable-geometry nose and visor is pictured in the supersonic, subsonic and approach-to-land positions. The design was changed, largely at the direction of the FAA, to include a transparent visor design challenge, since the visor also protected the main windshield panels from the effects of kinetic heating. 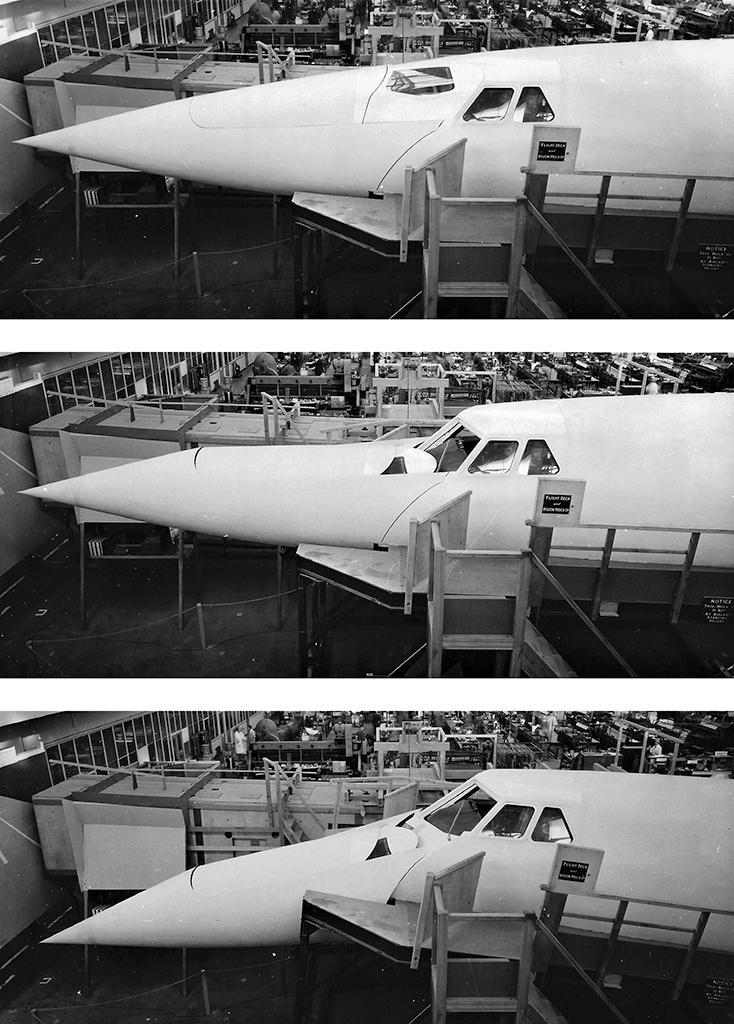 Powered by two hydraulic systems, the nose could be fully drooped in 12 sec. and raised in less than 19 sec. (AW&ST Sept. 27, 1971, p. 25) The aircraft normally would be flown with the visor up, but for takeoff the nose would be drooped 5 deg. and the visor lowered. Both would be raised for the start of acceleration to Mach 1 and beyond; for landing, the visor would be lowered again and the nose fully drooped. 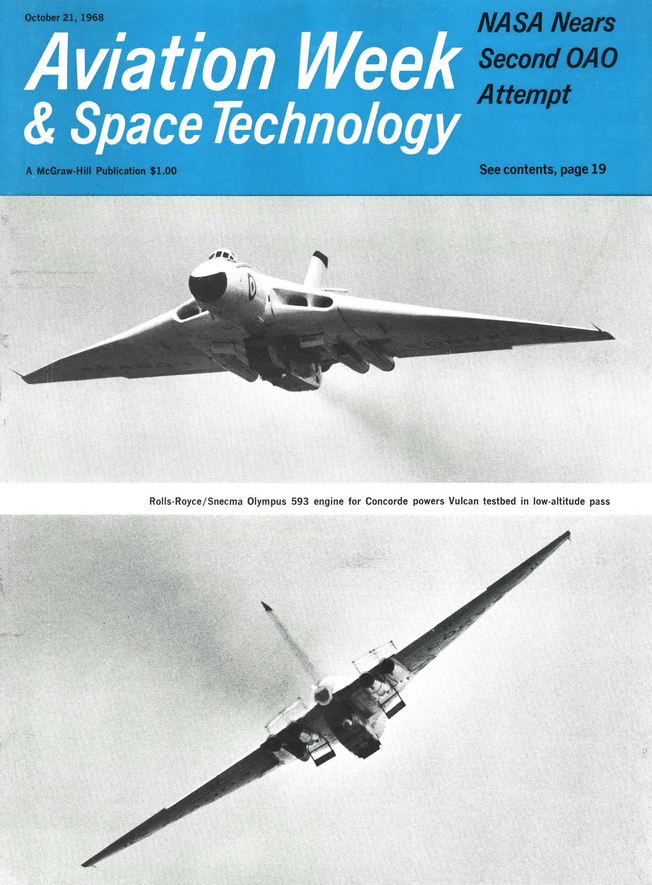 Concorde was powered by four Olympus engines, jointly built by Rolls-Royce and SNECMA, which established the footing for SNECMA to enter into civil aviation turbojet engine manufacturing. An Avro Vulcan bomber was converted into a flying testbed for the new engine and is shown on the front cover of Aviation Week with a version of the Olympus engine attached to its belly. 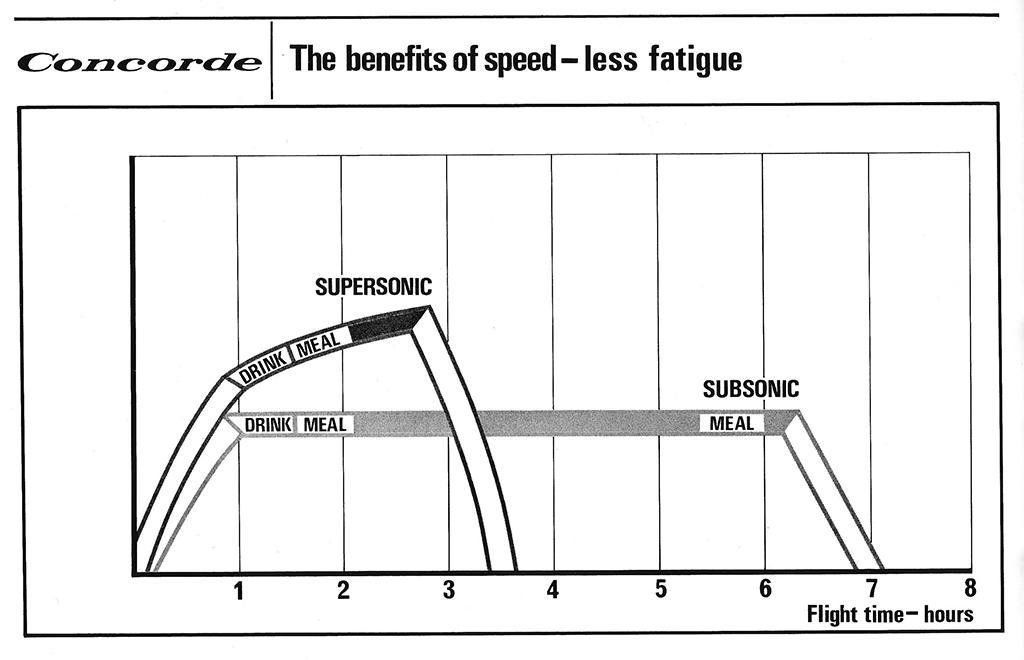 Despite the aircraft’s ability to operate safely and reliably at its Mach 2.04 cruise speed (1,354 mph at cruise altitude) with up to 128 passengers, high operating costs and noise ultimately doomed Concorde’s sales hopes. Although Air Canada and United Airlines had already cancelled their commitments in 1972, the real body blow followed in 1973 when Pan Am ditched its orders followed in quick succession by Continental, American, TWA, Middle East Airlines, JAL, Sabena, Eastern, Braniff and Lufthansa. The marketeers desperately tried to revive interest by advertising the benefits of speed, but it was too late. Air India cancelled in 1975 while CAAC of China and Iran Air both confirmed cancellation of their options as late as 1980. 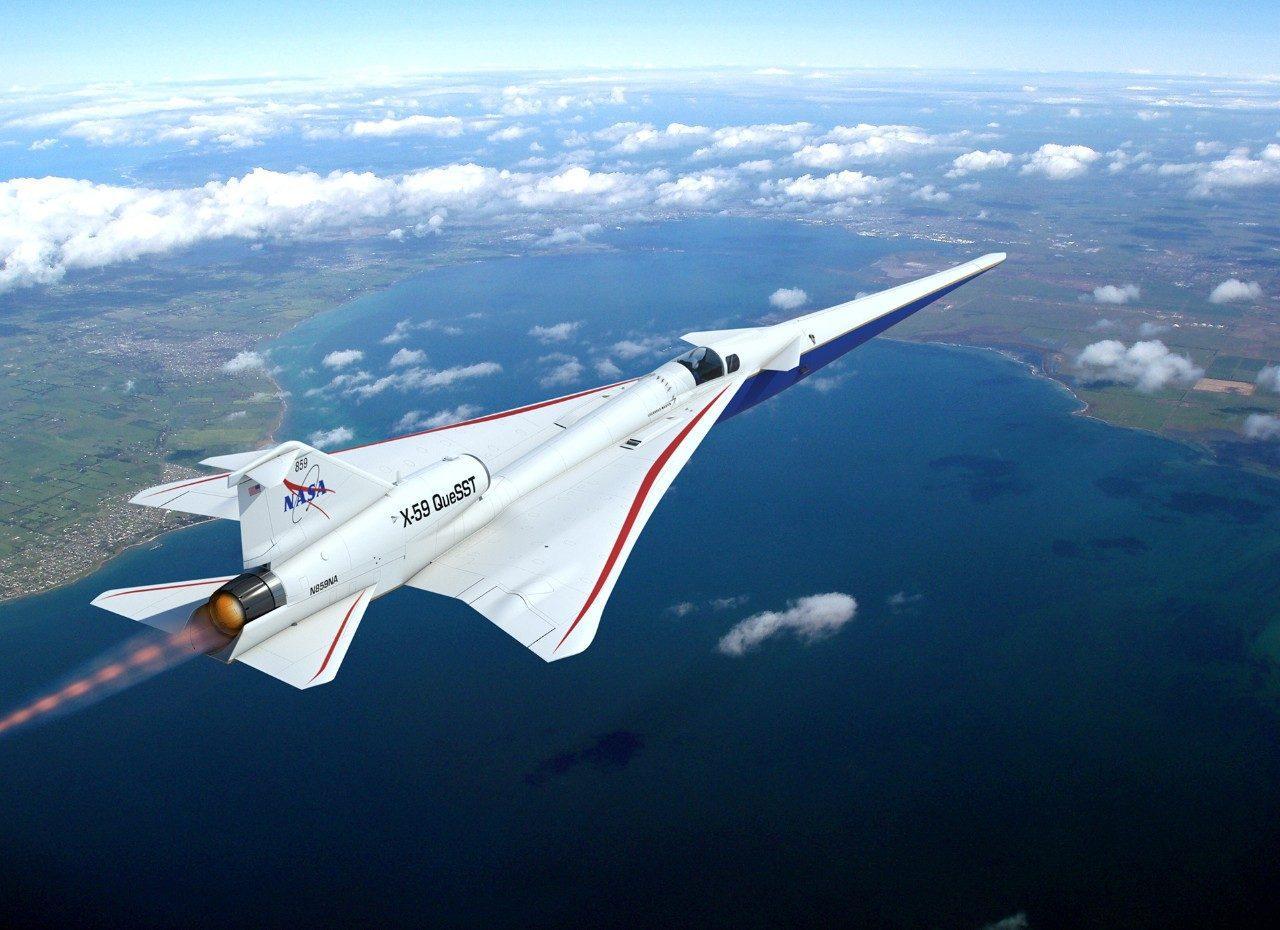 What's Next For Supersonic Technology?

Following on from news that American Airlines has announced plans to acquire up to 60 Boom Supersonic Overture airliners, overtaking United Airlines as the biggest customer yet for the in-development Mach 1.7 transport.

As the drive toward sustainable commercial supersonic aircraft begins to accelerate, it seems remarkable that half a century ago the first supersonic airliner prototypes were already entering flight testing and the coming high-speed leap in civil aviation was viewed as a near-term inevitability. We take a look at arguably the most famous supersonic aircraft of all – Concorde.