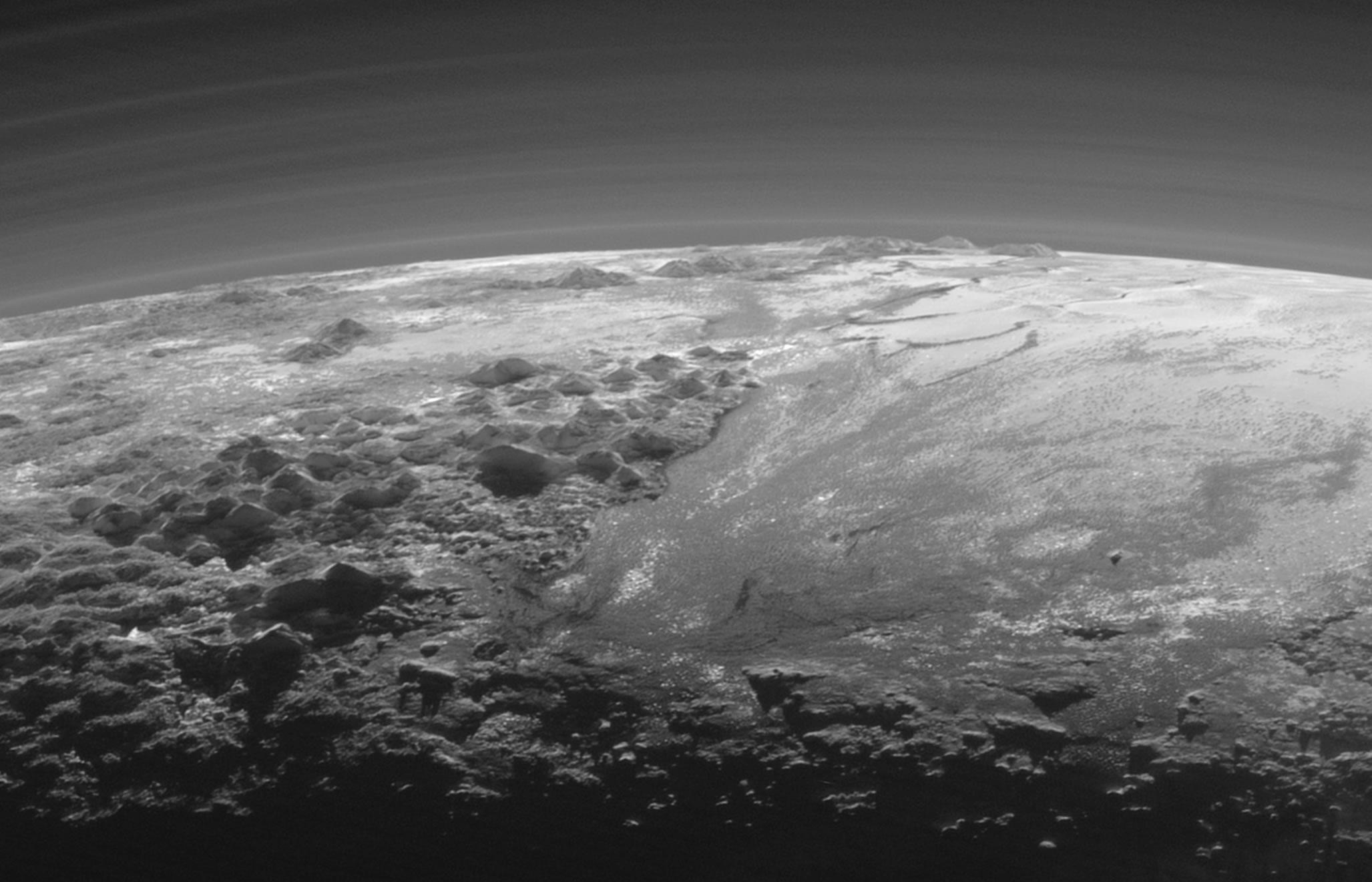 A crescent view of Pluto captured near sunset as New Horizons hurtled into the Kuiper Belt reveals at least 12 distinct layers in the backlit atmosphere, and mountains as high as 11,000 ft. that may be huge blocks of water ice. To the east of the mountains is the flat Sputnik Planum feature, which scientists believe is frozen nitrogen. Visible on the plain are some of the parallel ridge lines that science-team geologists say look a lot like dunes, although if that is what they are, it is far from clear how they were formed. The scene measures 230 mi. across and was collected from a range of 11,000 mi.

Looking Back Toward the Sun

This is a wider view of the look-back scene collected after New Horizons passed Pluto. The mountains to the west (left side of the image) include peaks scientists have informally dubbed Norgay Montes (foreground) and Hillary Montes (on the horizon) after the first two men to conquer Earth’s Mount Everest. Scientists believe the rough terrain to the east (right) side of flat Sputnik Planum includes valleys cut by glaciers of nitrogen ice. 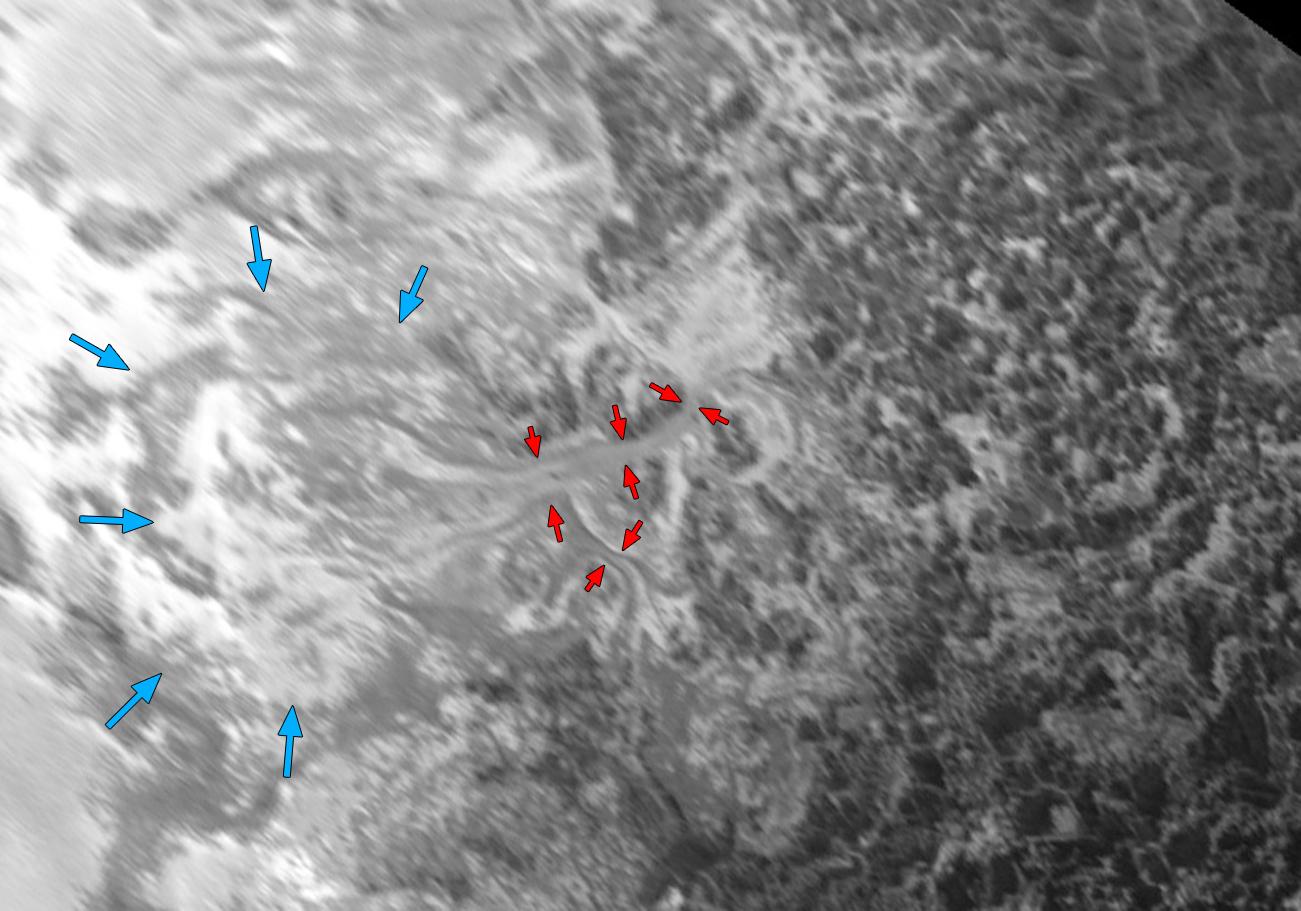 This enlarged image gives a closeup of the terrain shaped by ice—probably frozen nitrogen—flowing down from higher ground (blue arrows). The narrow mountain passes widen into valleys 2-5 mi. wide (red arrows) at the eastern side of Sputnik Planum. Scientists are still working to understand how the ridges and pits at the right side of the image were formed. The entire scene is 390 mi. wide. 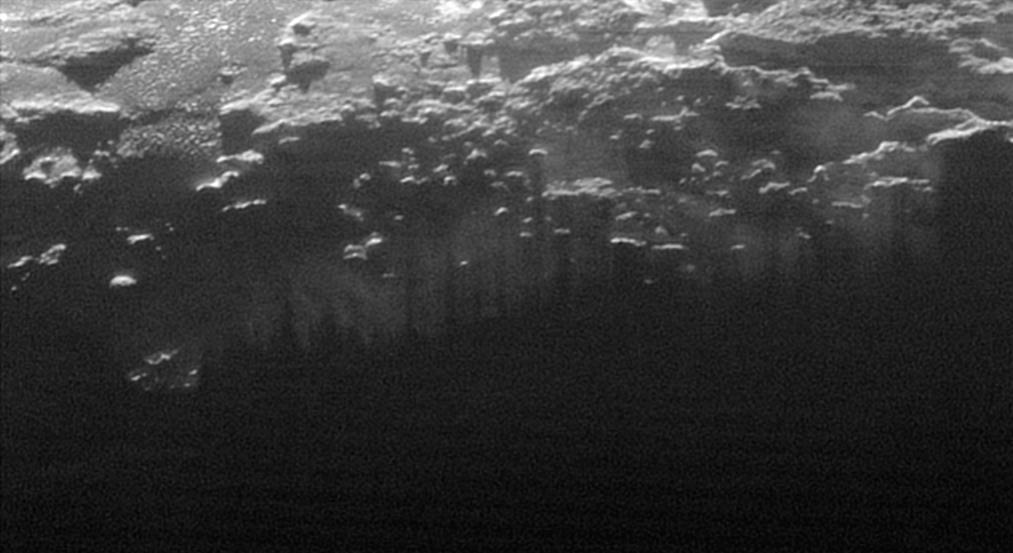 A fog or haze near the surface of Pluto is illuminated from the top of this image by the Sun, which throws shadows through it from the tops of hills and small mountains. The image is 115 mi. wide.

New imagery from the July 14 flyby of Pluto by the New Horizons probe continues to reach the big antennas of NASA’s Deep Space Network. Included in the latest batch are some spectacular shots collected about 15 min. after closest approach, looking back toward the Sun.