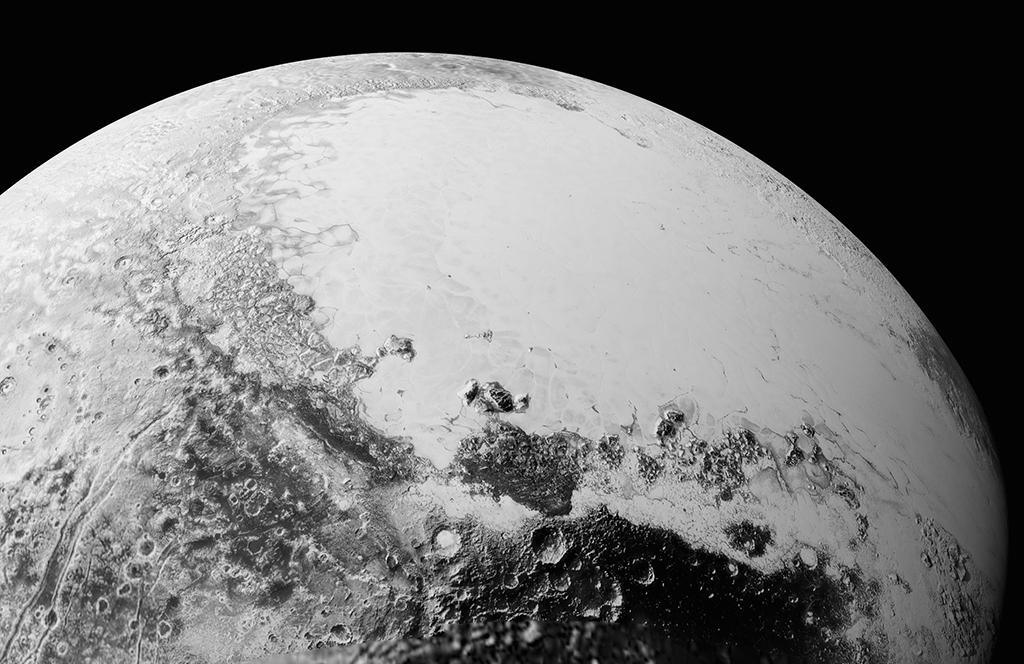 New Horizon imaged one side of Pluto in its high-speed flyby July 14, so the year ahead will provide better and better views from that perspective, enriched with higher-resolution imagery, data from other instruments on the spacecraft, and sophisticated processing on the ground. This mosaic image displays the equatorial region of Pluto, which mission scientists have named Cthulhu Regio, as it would appear from an altitude of about 1,100 mi. “The surface of Pluto is every bit as complex as that of Mars,” says Jeff Moore, who heads the mission’s Geology, Geophysics and Imaging team at NASA’s Ames Research Center. 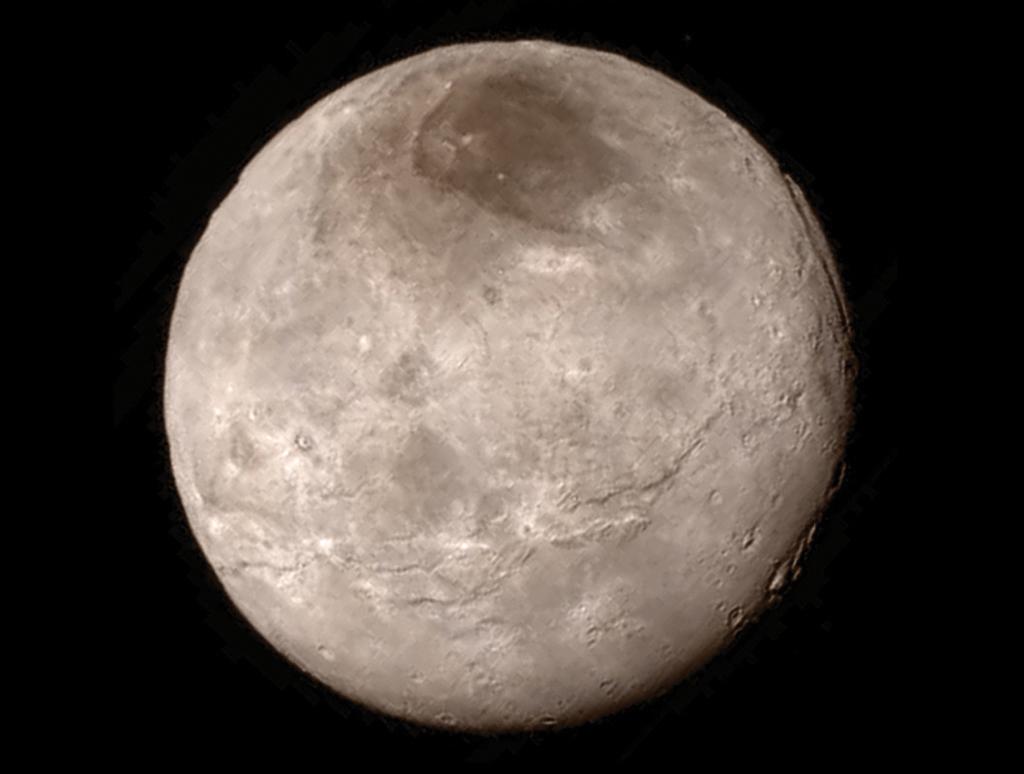 This image of Charon clearly shows the dark cap at the big moon’s north pole, which has proved to be reddish in color based on data from the probe’s Ralph instrument. The color suggests the feature is the result of Pluto’s atmosphere—mostly nitrogen, with methane and carbon monoxide—freezing onto the surface, which gets as cold as -433F, close to absolute zero. There it is transformed by sunlight into tholins, which don’t sublimate back into gas when the temperature rises to its high of -351F during the course of the moon’s year. The tholins remain cold-trapped at the pole, building up over millions of years into the deposit on view today. “It appears the conditions on Charon are right to form red tholins . . . although we have yet to figure out exactly why,” writes Carly Howett, a senior research scientist at Southwest Research Institute who is working with the Ralph data. 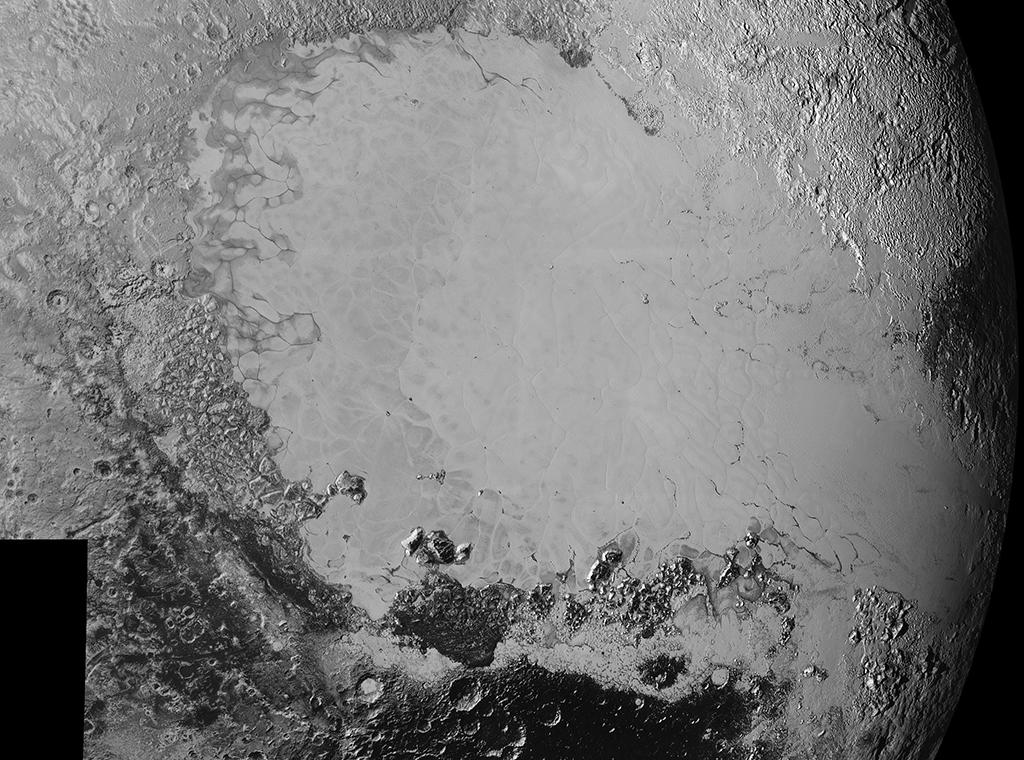 The icy plane dubbed Sputnik Planum is surrounded by other terrains that may have origins unlike anything seen before. “The randomly jumbled mountains might be huge blocks of hard water ice floating within a vast, denser, softer deposit of frozen nitrogen within the region informally named Sputnik Planum,” says Jeff Moore, the geology team lead. The smallest feature in this mosaic view, which spans about 1,000 mi., is 0.5 mi. across. 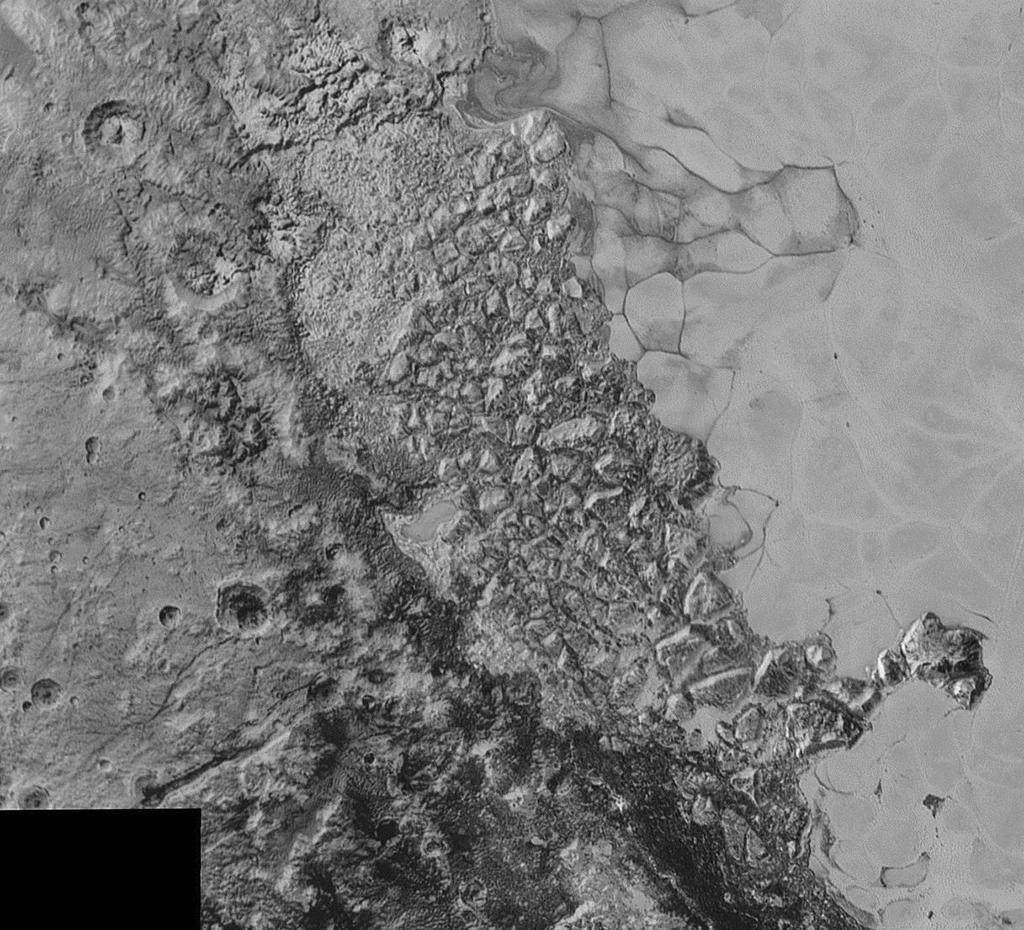 The broken terrain at the northwestern edge of Sputnik Planum illustrates Pluto’s “diversity of landforms and complexity of processes that rival anything we’ve seen in the Solar System,” in the words of Alan Stern, the mission’s principal investigator. “If an artist had painted this Pluto before our flyby, I probably would have called it over the top—but that’s what is actually there,” he says. 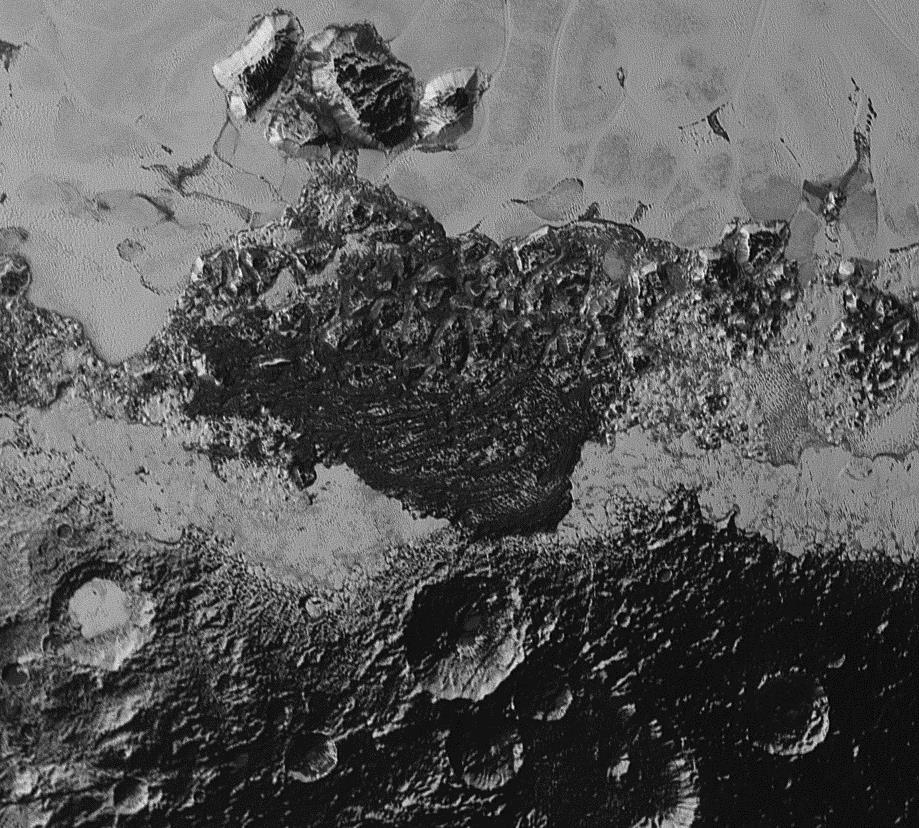 At the edge of Sputnik Planum is this region of ancient craters adjacent to the smooth plains, which display “dark, aligned ridges that resemble dunes,” according to the science team. “Seeing dunes on Pluto—if that is what they are—would be completely wild, because Pluto’s atmosphere today is so thin,” says William McKinnon of Washington University in St. Louis, a deputy lead on the Geology, Geophysics and Imaging team. “Either Pluto had a thicker atmosphere in the past, or some process we haven’t figured out is at work. It’s a head-scratcher.” The scene measures 220 mi. across and was collected at a range of 50,000 mi. 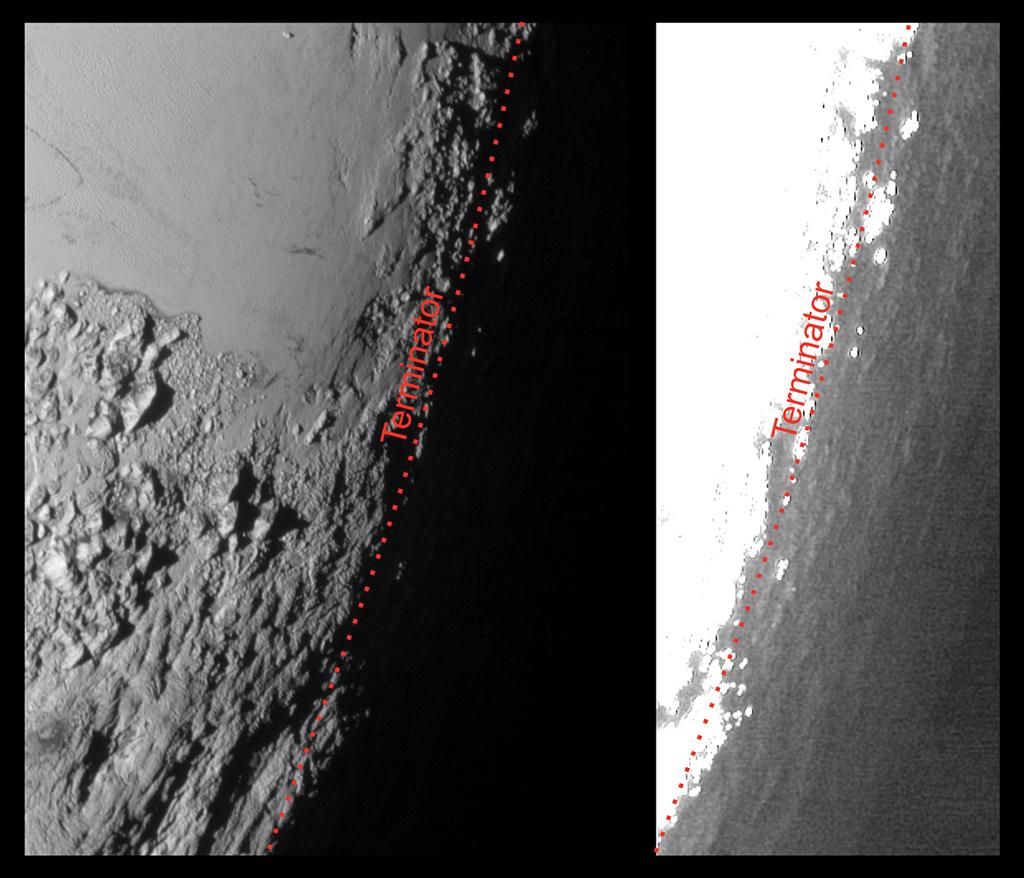 Twilight from the atmospheric haze detected by New Horizons allows the science team to see past the day/night terminator into nighttime regions. The image on the right has been processed for greater brightness to reveal terrain that otherwise would be hidden by darkness. Later imagery may be able to unveil more of Pluto’s night side, illuminated by moonlight—reflected sunlight—from Charon.

Imagery collected as the spacecraft looked back toward the Sun after its flyby of Pluto reveals new detail in the layers of haze in the atmosphere. Collected almost 16 hr. after closest approach, at a range of 480,000 mi., the images were not digitally compressed as were the early versions sent down as a precautionary quick look. 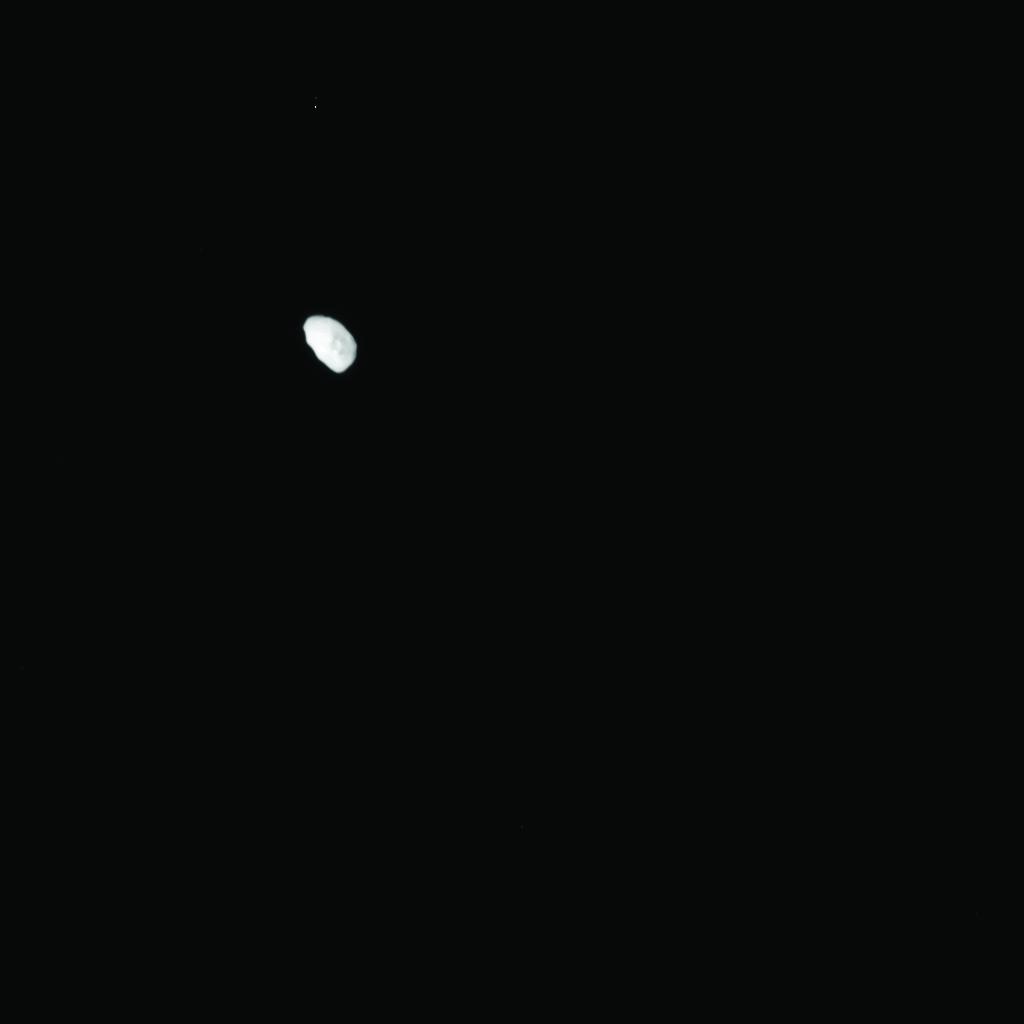 Measuring only 25 mi. across, Pluto’s moon Nix's irregular shape illustrates its unique history. Scientists hope the four tiny moons orbiting beyond Charon will hold clues to the formation and nature of the Kuiper Belt, a vast region of icy objects beyond Neptune. Pluto is considered the largest Kuiper Belt object (KBO), and NASA is considering a KBO flyby early in 2019.

The nuclear-powered New Horizons Kuiper Belt probe has started sending imagery again after a month-long hiatus, while other data trickled across the Solar System at a glacial 1,000-4,000 bps, images of Pluto with resolutions as good as 400 meters (1,300 ft.) per pixel have reached the Deep Space Network. Continued study has given more weight to the theory that a distinctive red color at Charon’s north pole is the result of Pluto’s atmosphere crossing open space to be deposited in the deep freeze there, much as binary stars exchange their super-hot material. Together, Pluto and Charon are a binary dwarf planet, rotating around a point in space between them known as their barycenter.