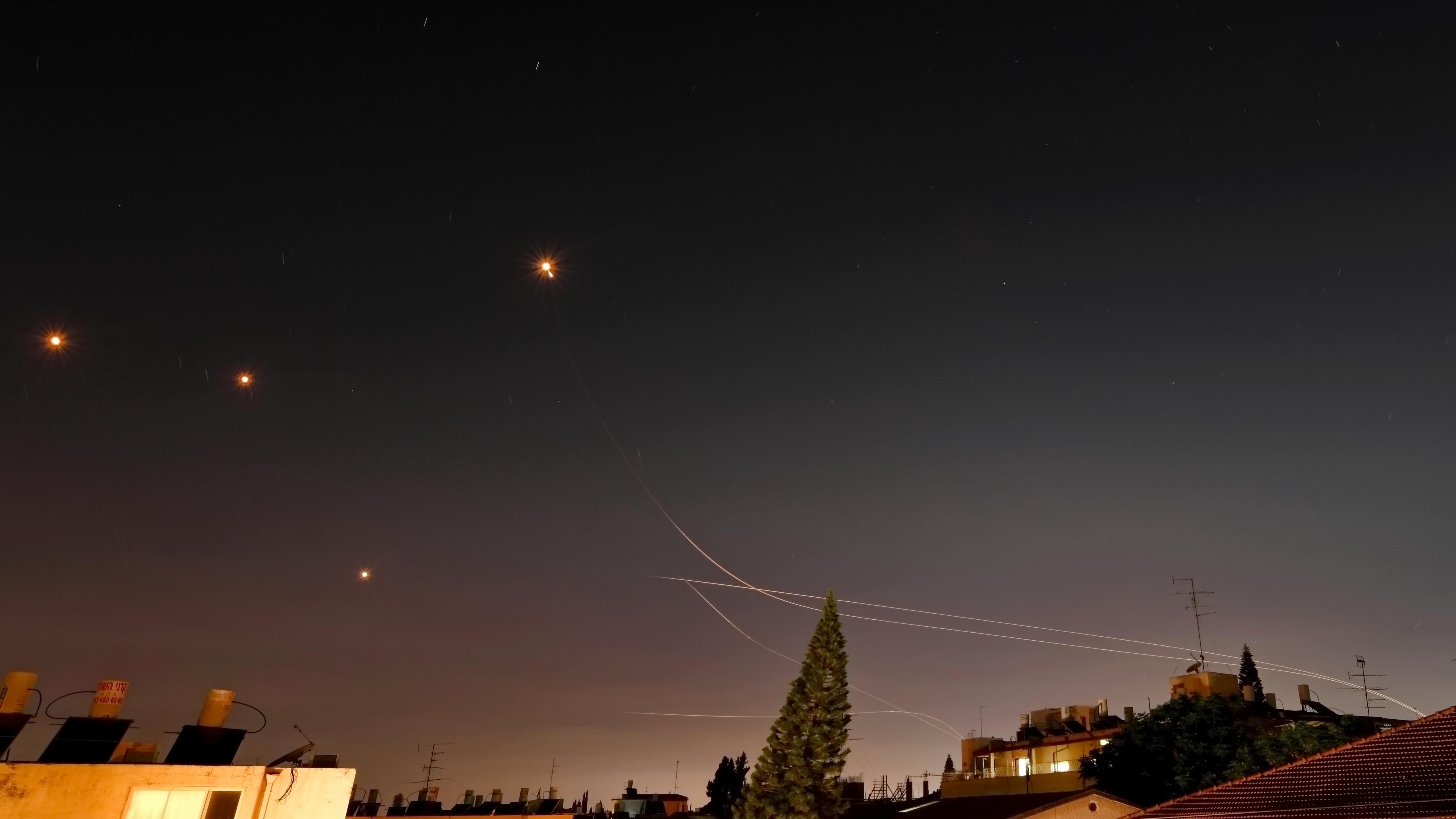 The sky above my hometown of Rehovot in central Israel was filled with Iron Dome “Tamir” missiles launched against incoming missiles targeted at Tel Aviv. The streaks on the left are the Tamir missiles. The four bright spots on the left side of the photo are explosions at the moment of interception. 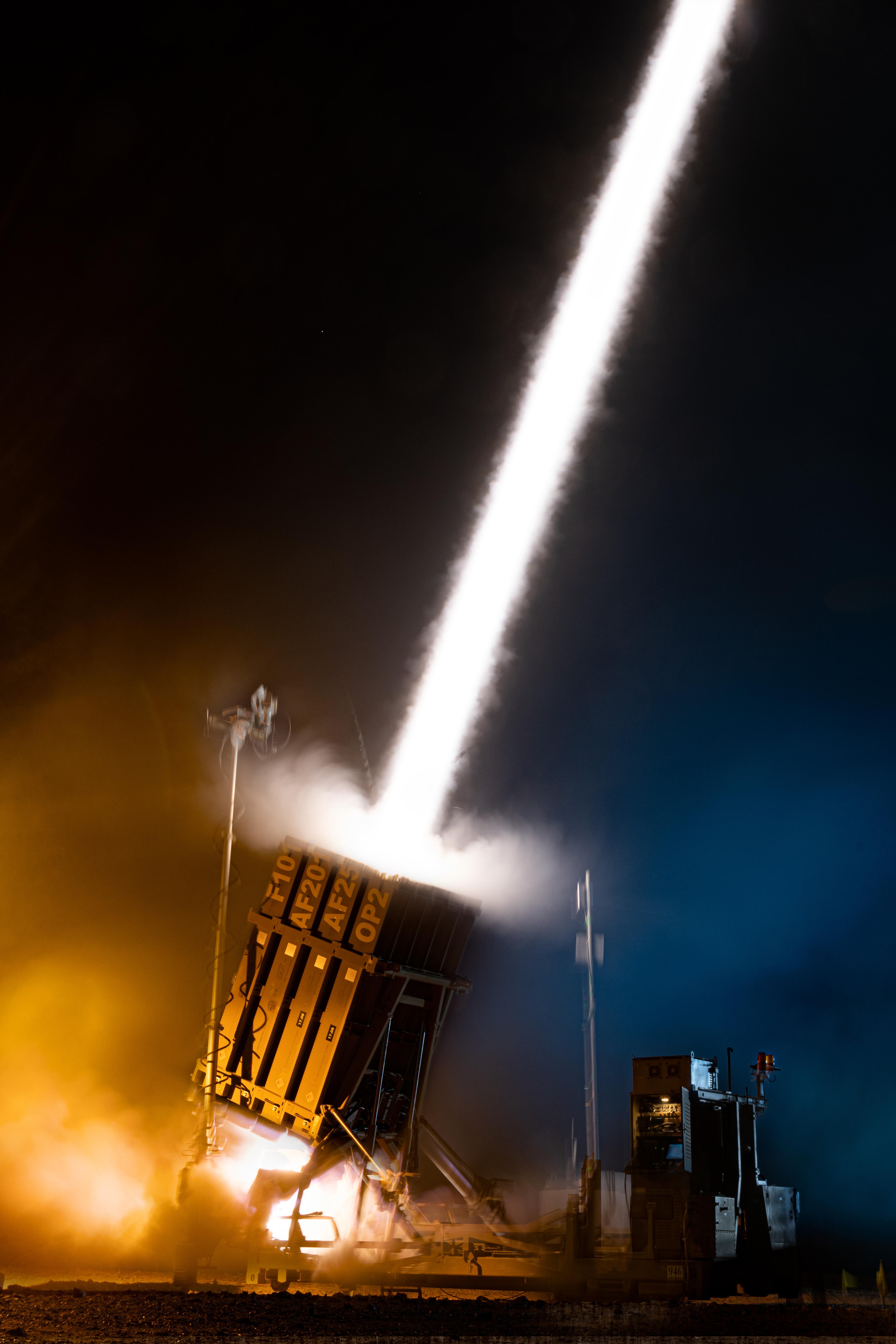 A long exposure of an Iron Dome missile launched at night seems like something from "Star Wars." The rocket rocks the ground and sears the night sky like a futuristic laser beam on its way to intercept an enemy rocket.

This image is an epic capture of modern war. Rockets were fired from Gaza (in the middle) at the coastal city of Ashkelon on the right and a small town on the left. Iron Dome defensive missiles were launched to intercept them in midair. It all happened at night, as the stars moved in their trails toward the Mediterranean Sea in the background. 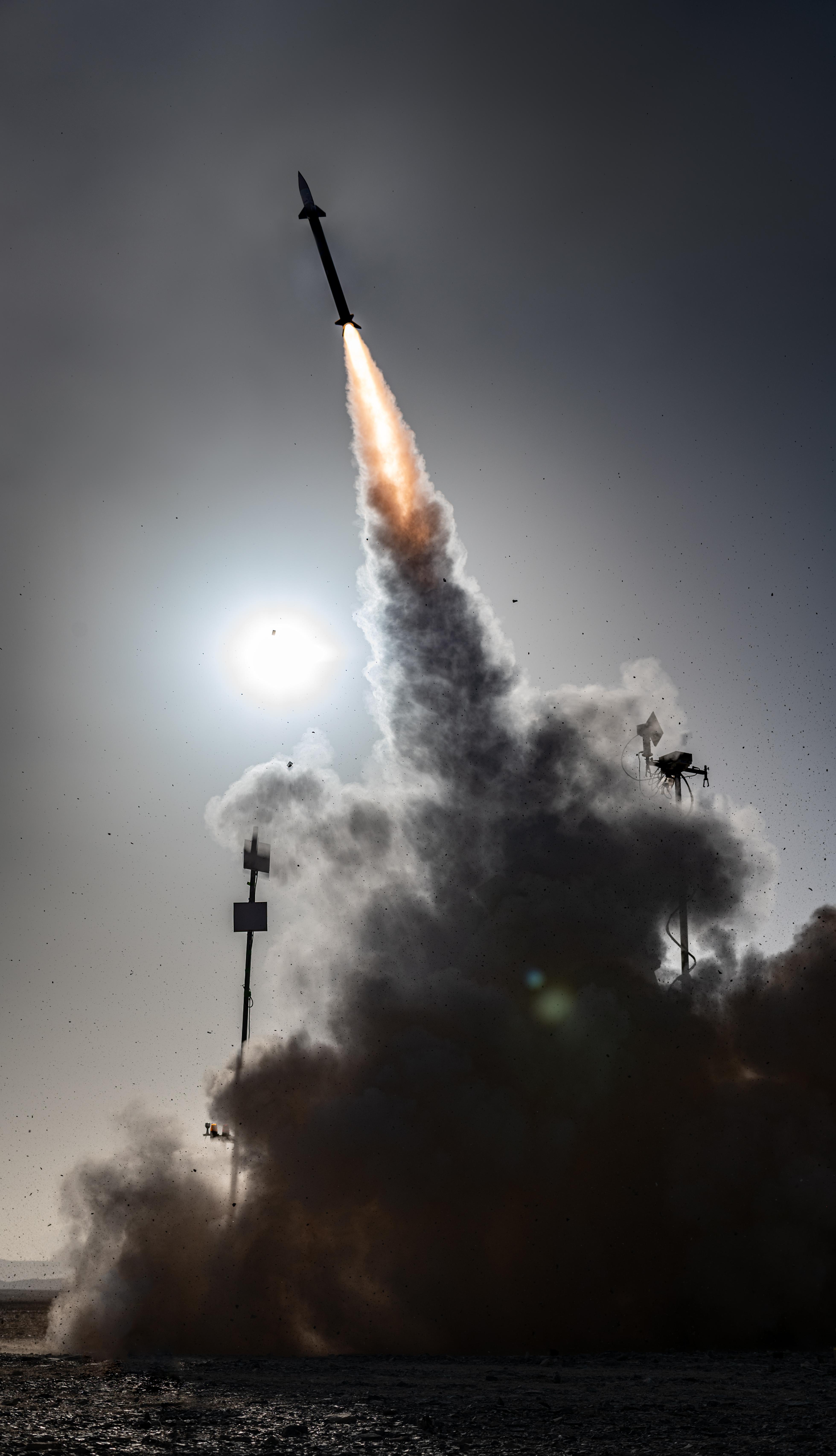 An Iron Dome interceptor missile ascends to meet an enemy rocket in the sky. A unique angle captures its silhouette with the setting Sun. 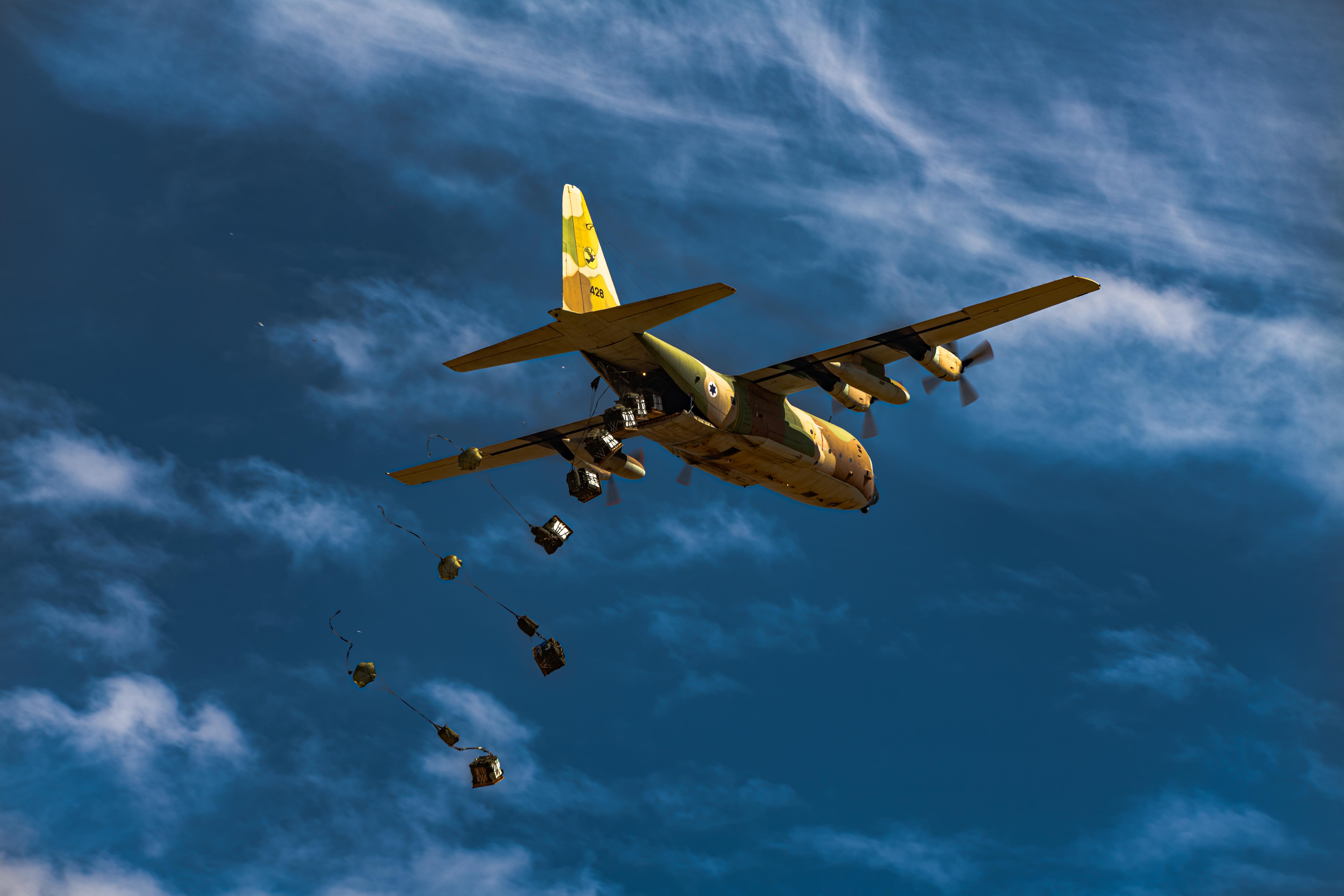 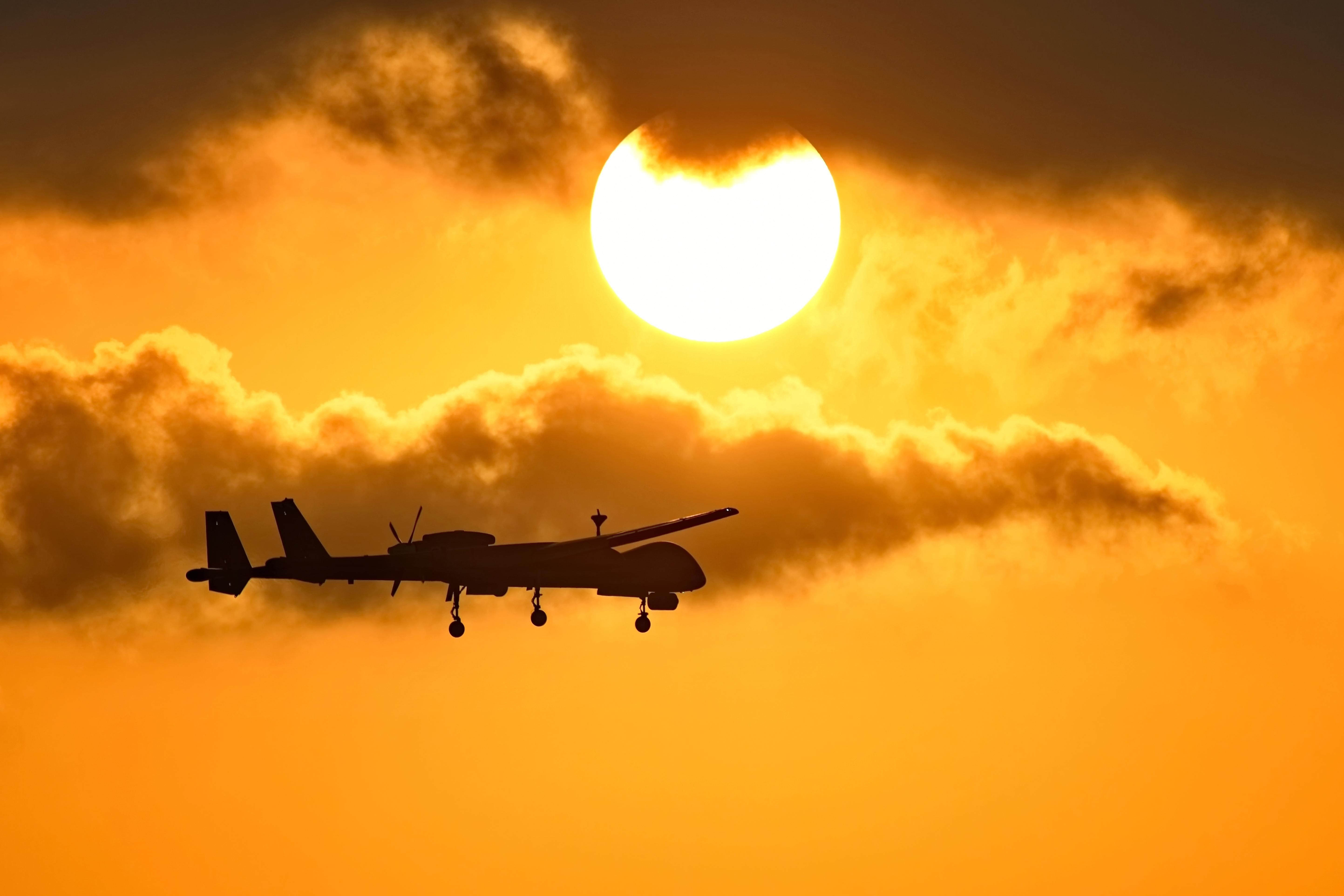 An Israel Aerospace Industries Eitan unmanned aerial vehicle from the Israeli Air Force returns to base at dusk after a surveillance mission.

A squadron of Israeli Air Force Sikorsky UH-60 Blackhawk “Yanshuf” helicopters takes off from a field landing site at night. Their navigation lights paint the night sky in a long-exposure shot like rockets. The mountains of Galilee and its villages provide a beautiful background.

Photos submitted for the Aviation Week Photo Contest’s Defense category usually are from training missions or air shows. But the hostilities in Israel and Gaza earlier this year put some photographers closer to the battlefield than they usually get.

“I’m not a war photojournalist, but sometimes war taps at your door,” says Avichai Socher of Givat Shmuel, Israel, who has submitted winning entries for the Aviation Week Photo Contest several times.

“Taking a photo of rockets fired at you under a siren that sends you to shelter is not something I thought I’d do,” Socher tells Aviation Week.

Four of the photos in this gallery document actual Iron Dome interceptions of rockets from Gaza, while the others are either training missions or operational flights far from the front lines.