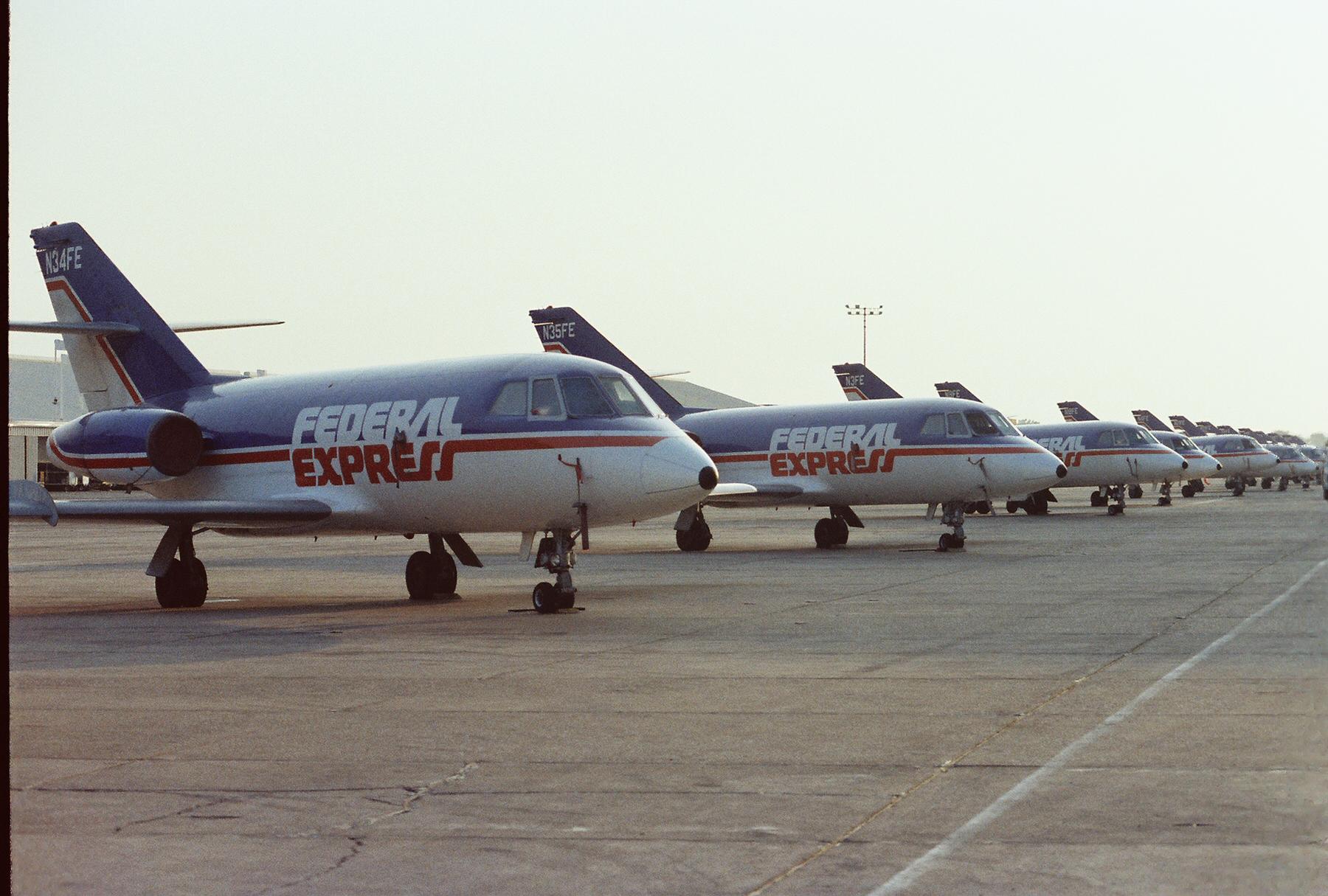 In 1980, FedEx was still a small yet growing cargo airline. It had been flying for a mere seven years, operated a single sorting hub in Memphis, and was in the early stages of moving from its original fleet of small Dassault Falcon 20s (pictured) to larger Boeing 727s and McDonnell Douglas DC-10s. 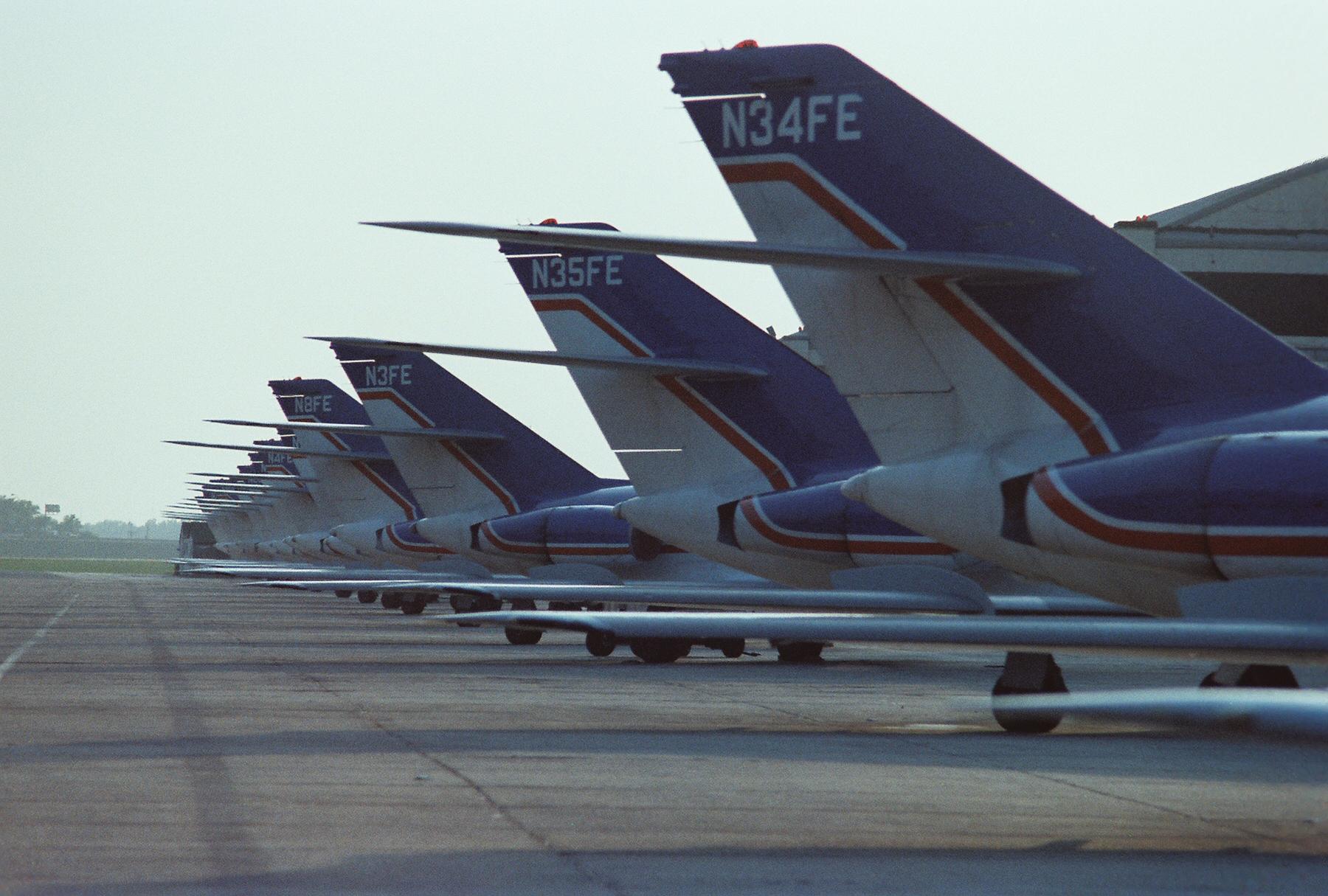 The Falcon 20s were key to FedEx's early success, but they quickly outgrew the French-built jets as package volumes rose. 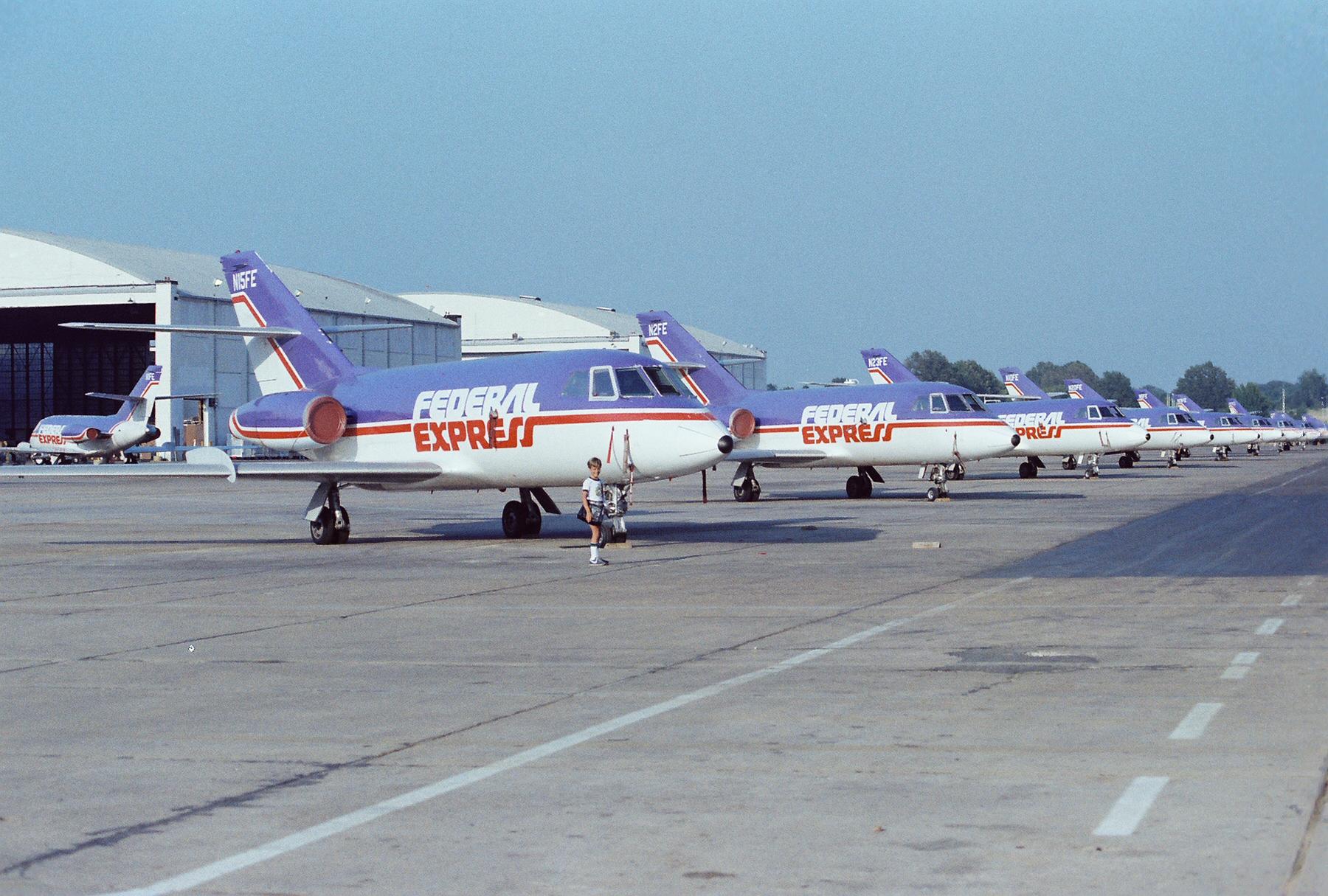 A lineup of at least nine Falcon 20s with another receiving attention at a hangar in the background. I was relegated to carrying the camera bag while posing in front of N15FE. 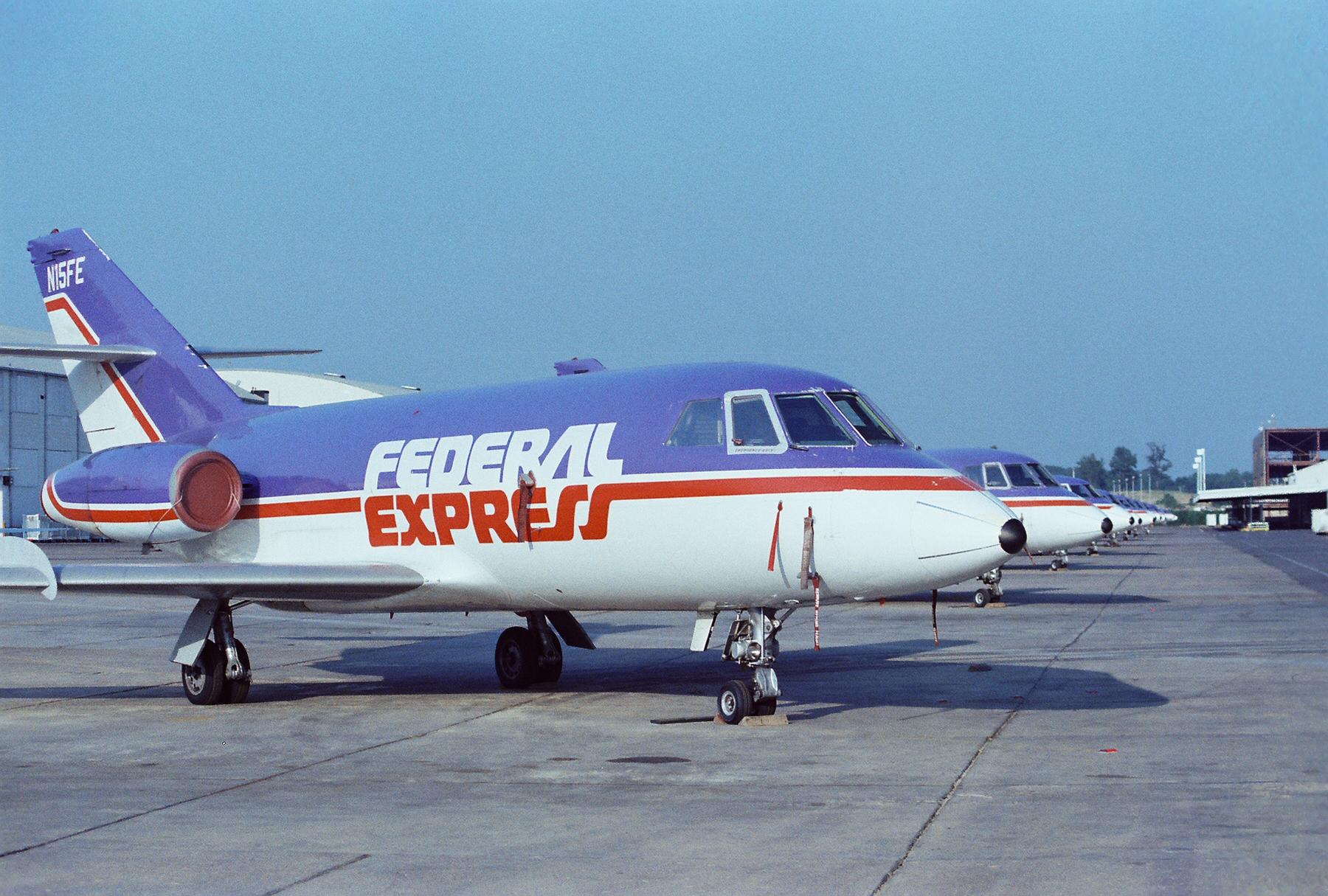 The same lineup of Falcon 20s with FedEx's sorting facility barely visible on the right. By 1980, FedEx was handling an average of 68,022 packages per day with a fleet of 56 aircraft. By 2016, that figure had risen to over 4 million express packages with a fleet of over 600 aircraft. 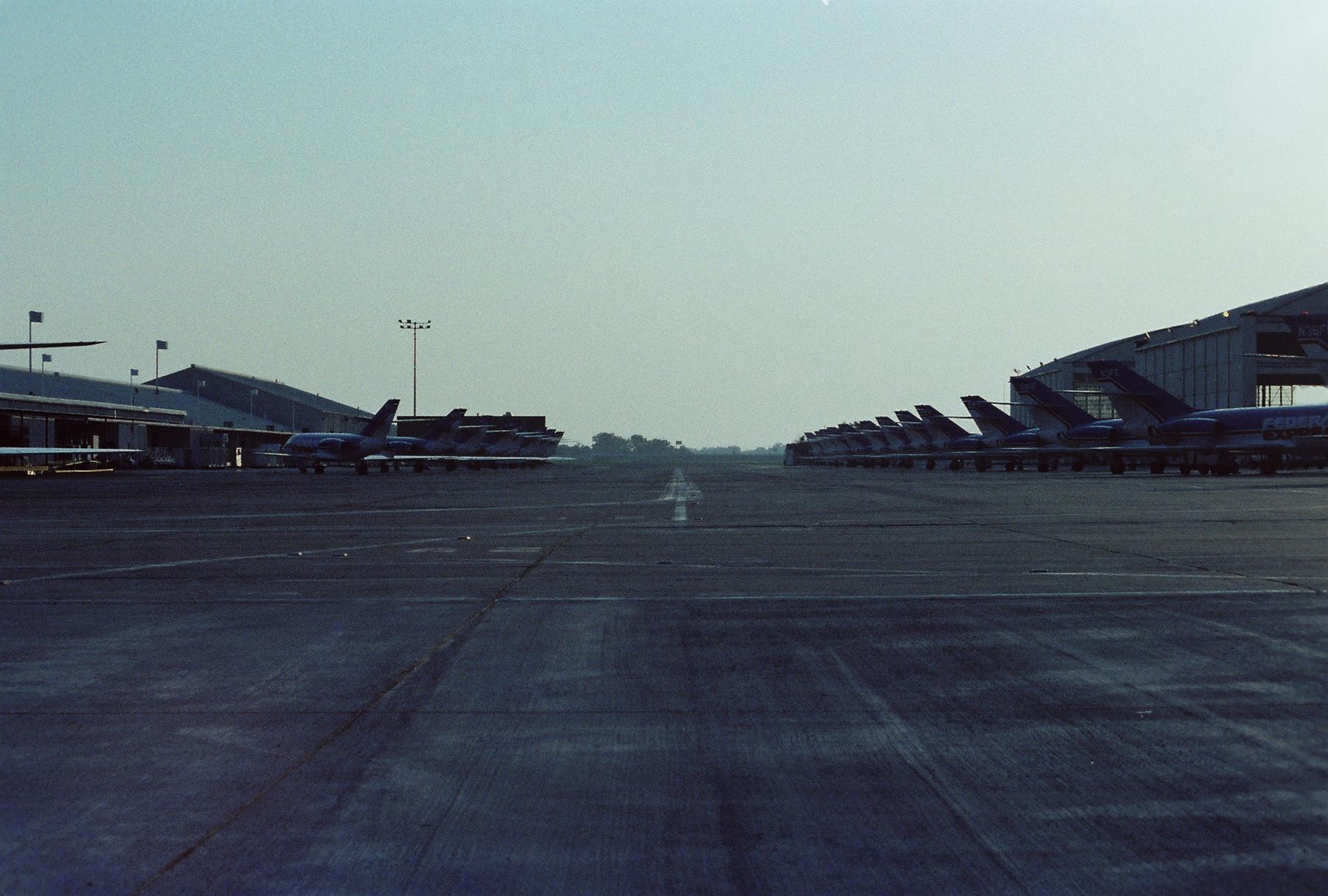 Over 20 Falcon 20s are seen here taking a rest on a quiet ramp, waiting for the workweek to begin. 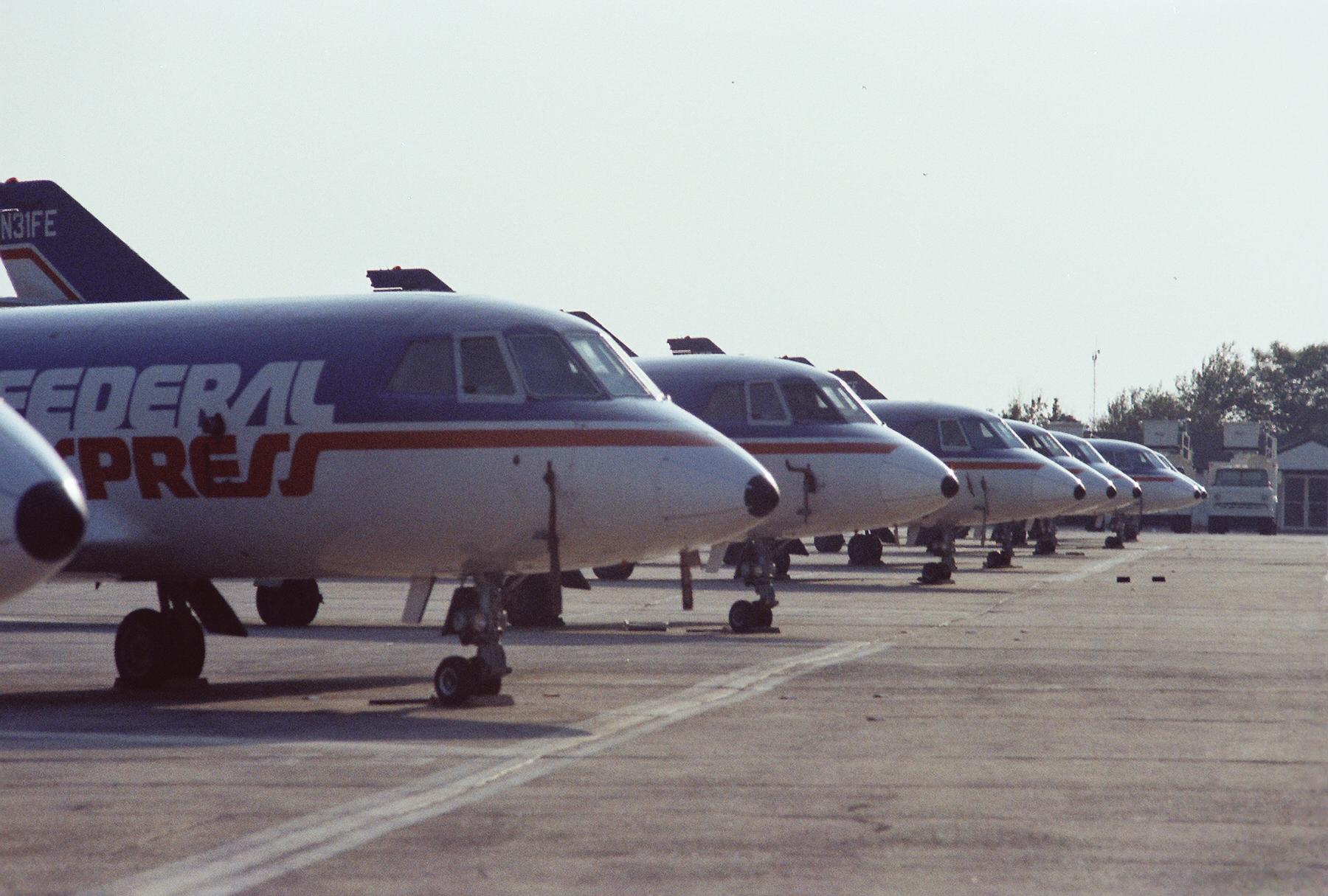 More lines of Falcon 20s. FedEx operated a peak of 33 Falcon 20s (although one was lost in an accident in 1975), but had sold their last one by 1985. Today, 19 of them are still flying according to Aviation Week's Fleet Discovery with another two on display in original Federal Express colors. 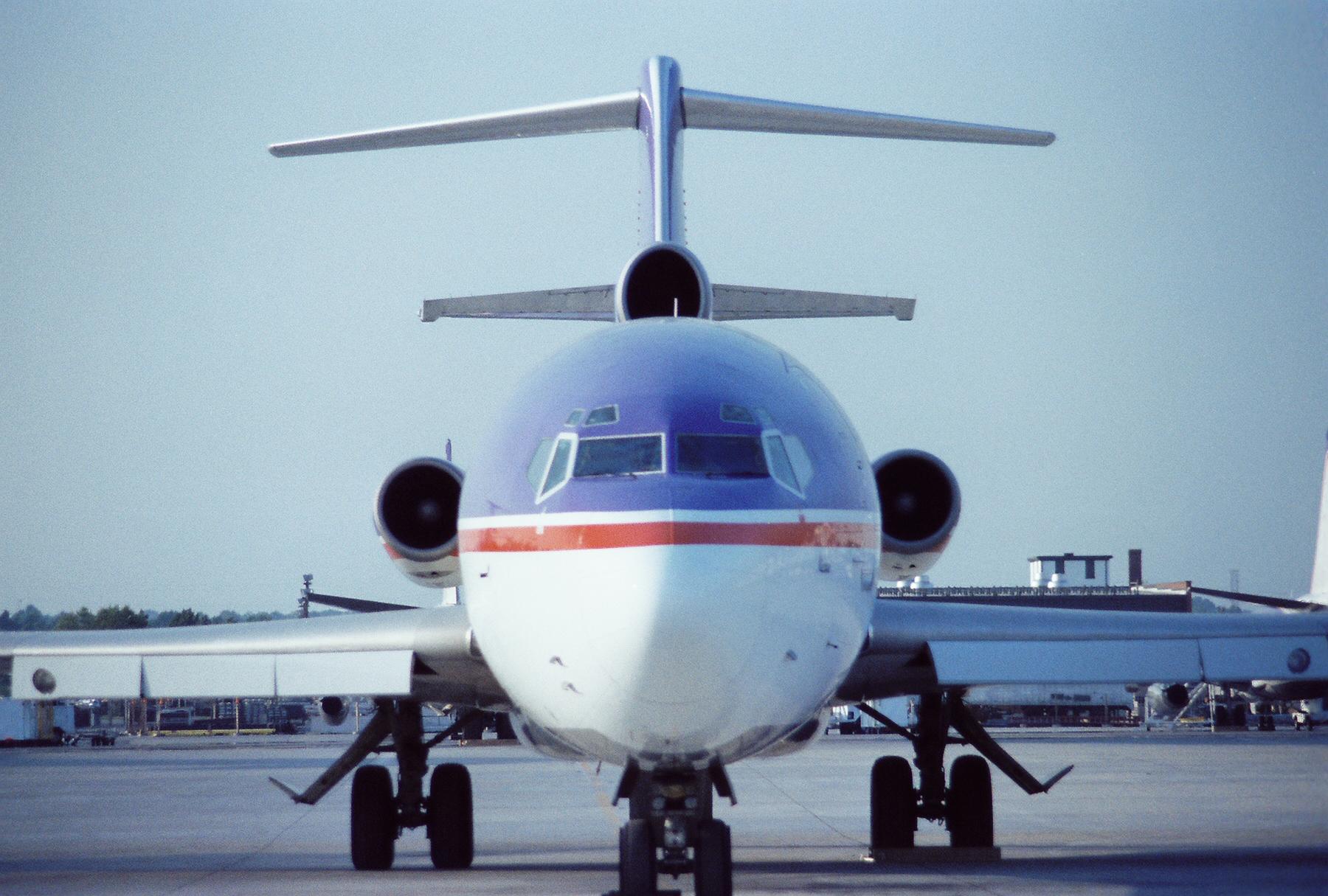 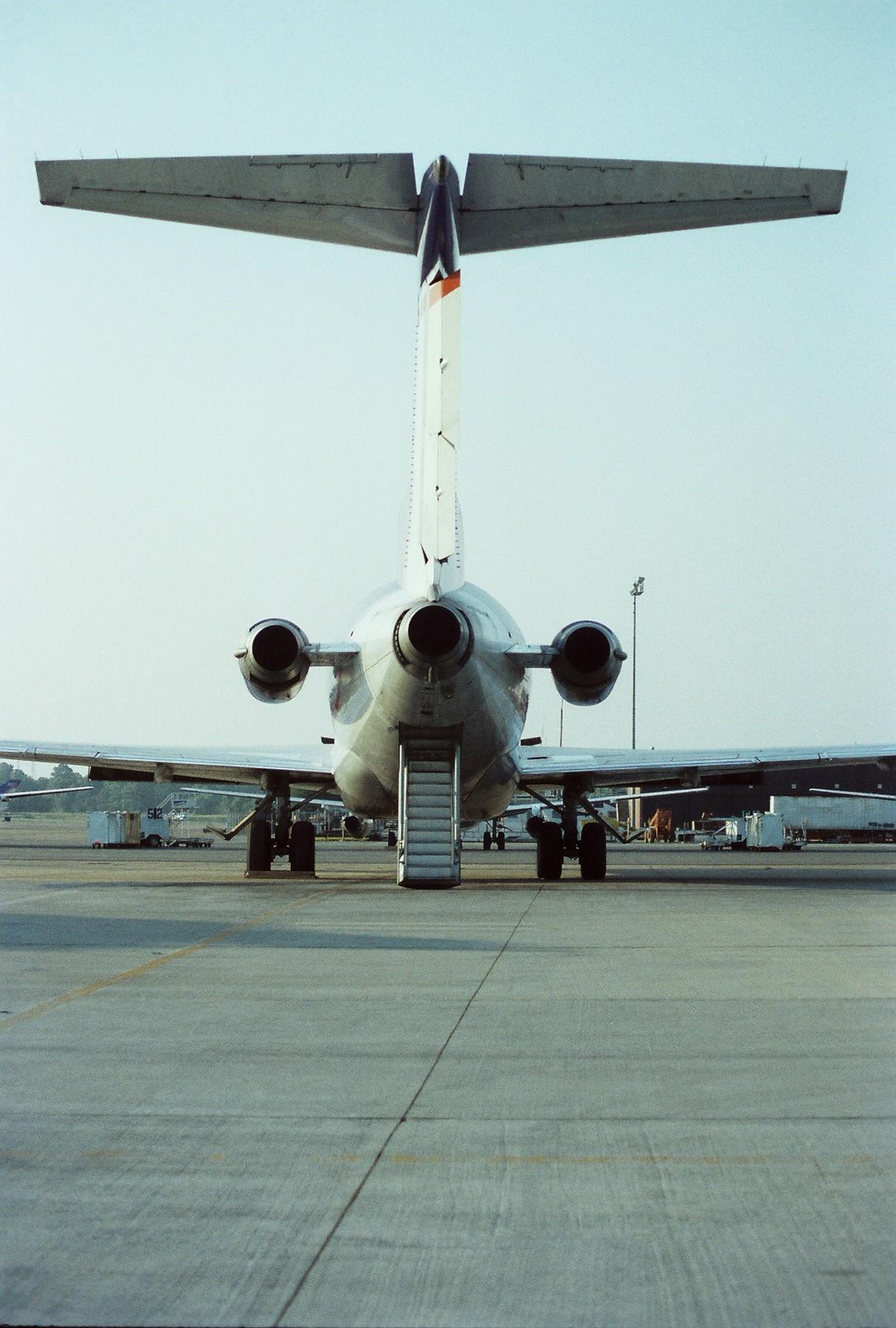 FedEx withdrew the last 727 from its fleet in 2013 after they operated a peak of approximately 160 in the mid-1990s. Many of them were donated to various museums, schools, and airports upon retirement and can still be seen scattered around the globe. 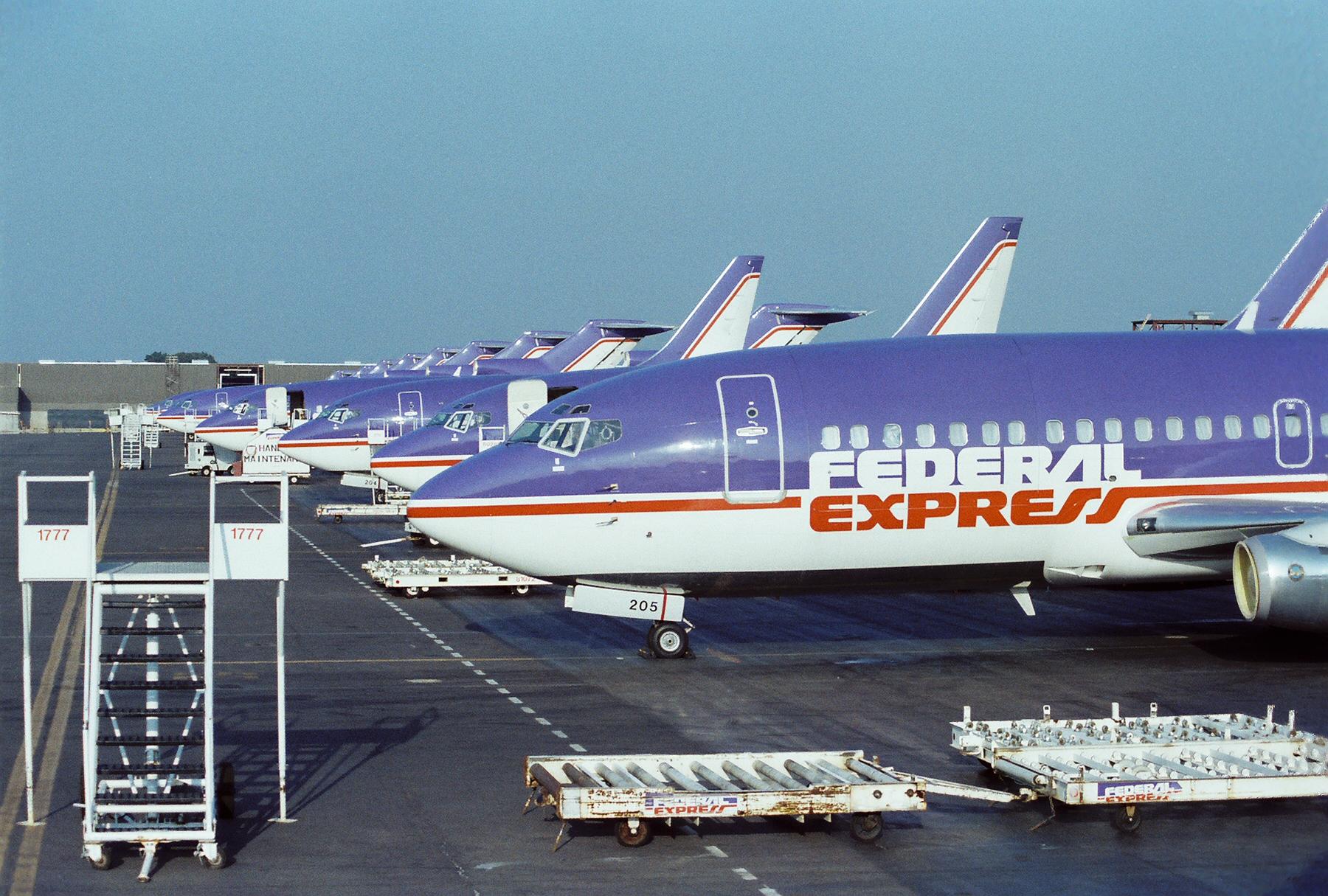 FedEx acquired five new Boeing 737-200Cs (pictured) in 1979 with the intent of flying them with passengers during the day and weekends when they weren't busy hauling freight. These 737-200Cs, being quick-change models, came with a full passenger interior and could be changed to freighter configuration (or vice versa) in approximately 45 minutes. However, the seats were stored in a hangar and the aircraft remained in freighter configuration while in service for FedEx. 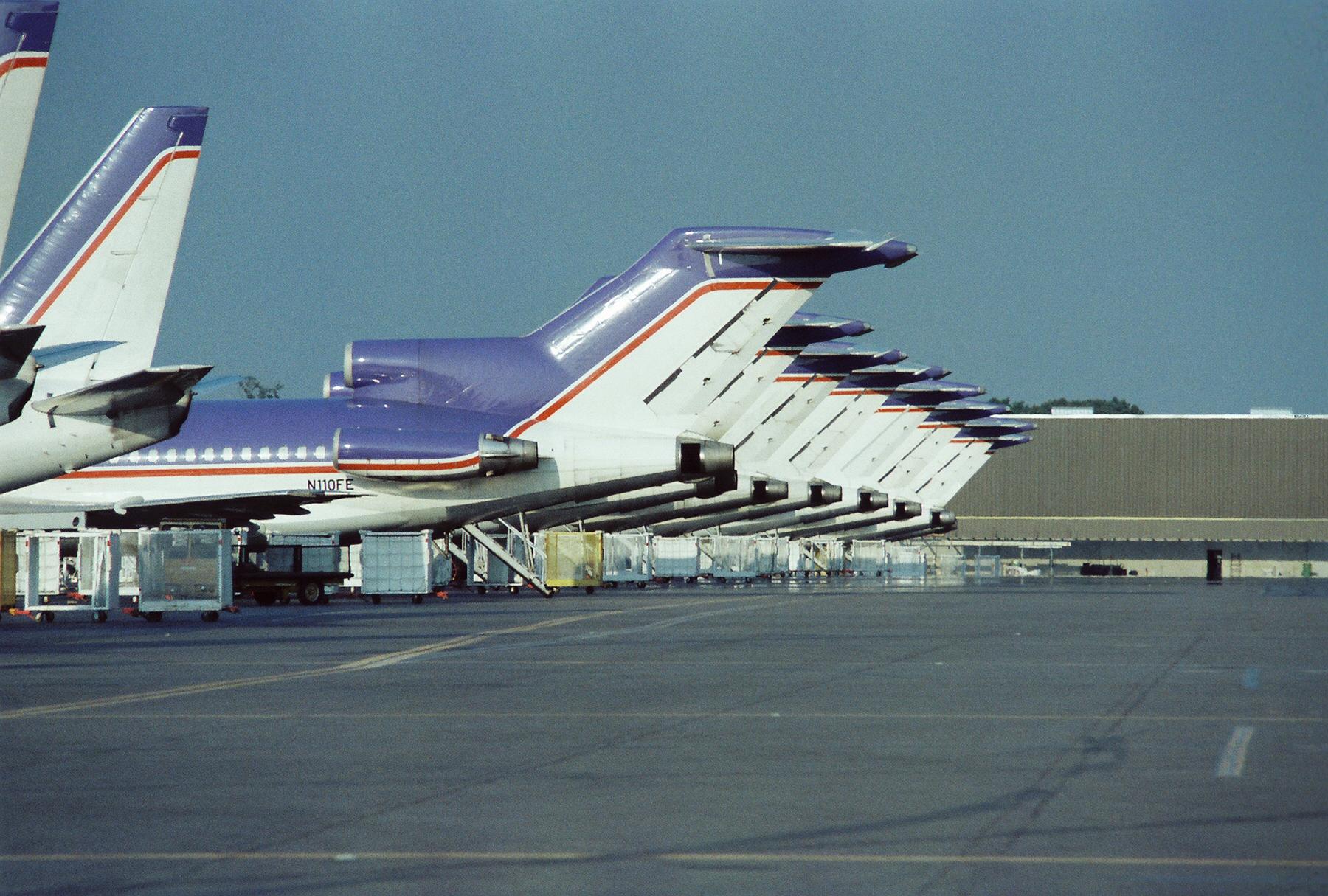 A couple of 737 tails can be seen here along a long line of 727 tails. FedEx's 1978 annual report gives us a little more detail on their proposed passenger operation, stating "In August 1978, the Company filed with the Civil Aeronautics Board for permissive passenger authority from Chicago's Midway Airport to 23 cities." Roughly 20 years later, however, it would be competitor UPS that would try its luck with passenger flights. 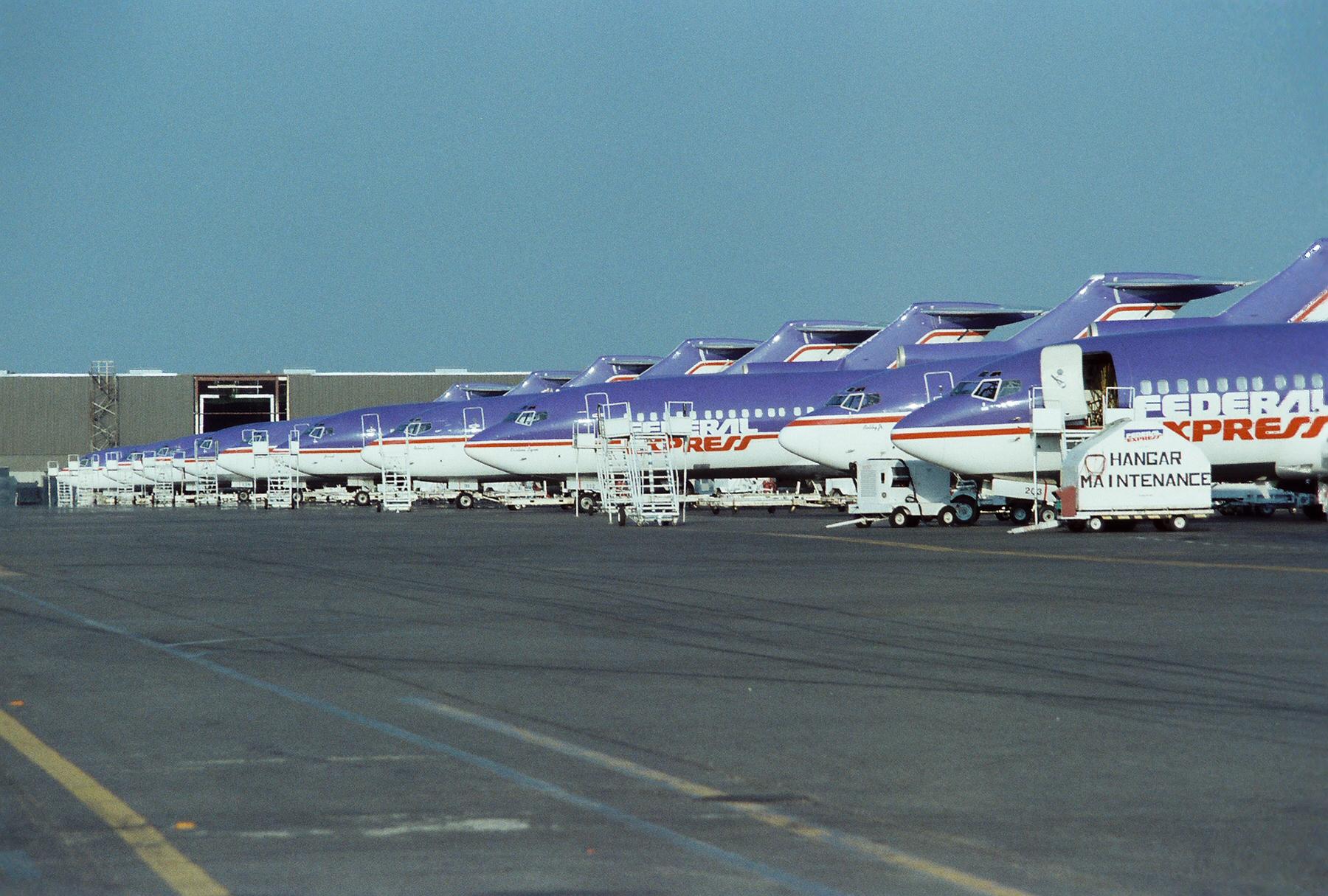 A lineup of 727 and 737 noses are seen here in front of FedEx's sorting facility. FedEx traditionally names each aircraft after an employee's child, but the 737s seem to have escaped this tradition as none have names in these photos. Also, notice the varying paint jobs on the aircraft with some having more purple on top than others. FedEx eventually standardized on having less purple on top for cosmetic reasons. 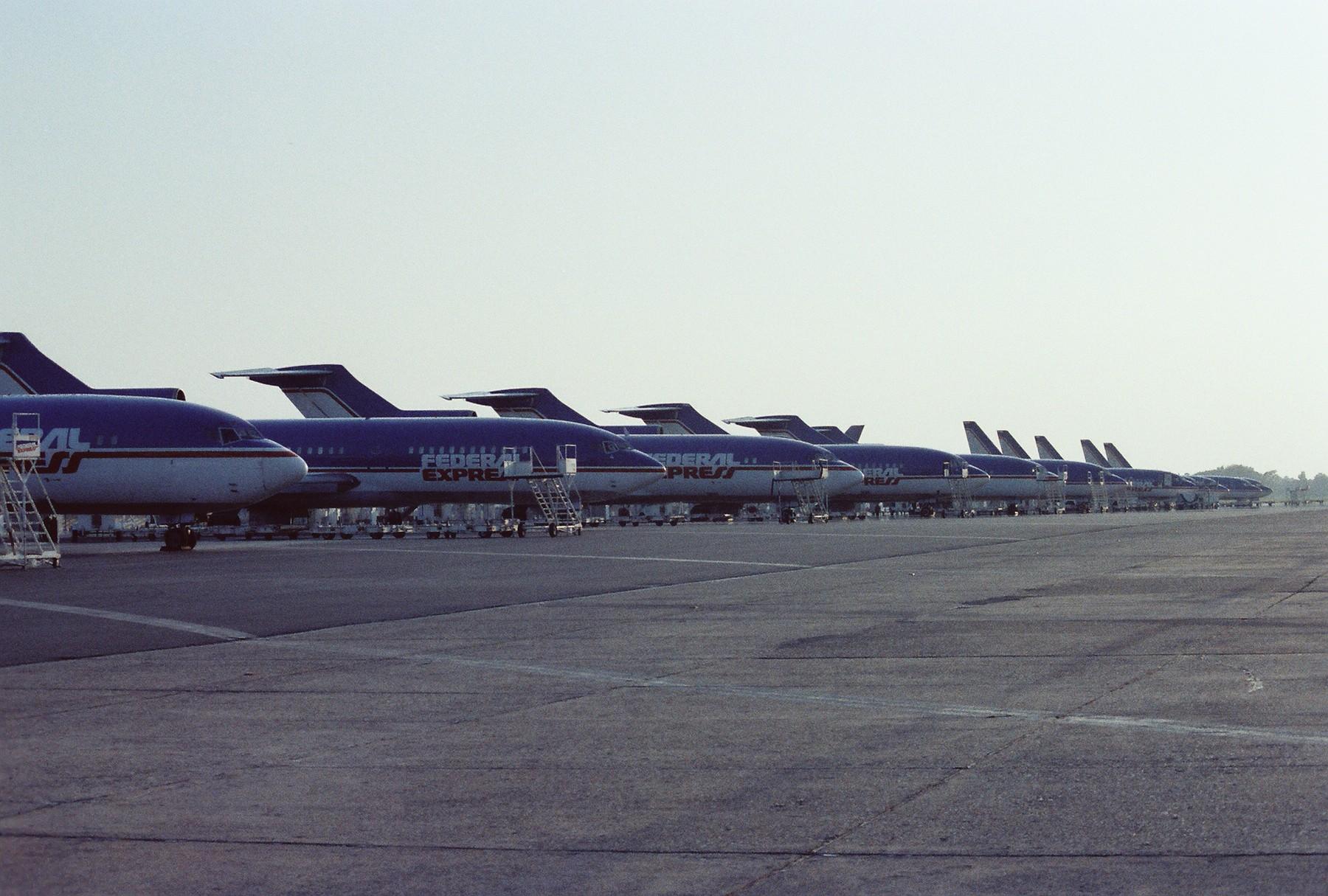 Seen here is a distant shot of all five FedEx 737s parked at the end of a line of 727s. FedEx decided not to get into the passenger-carrying business and, because the 737 was an oddball type in the fleet, all five were quickly disposed of. The last one left the fleet in early 1981 after less than two years of service. FedEx wouldn't see another new aircraft type until 1989 when it inherited DC-8s and 747s from its acquisition of Flying Tigers although both types would be disposed of by the mid-1990s. 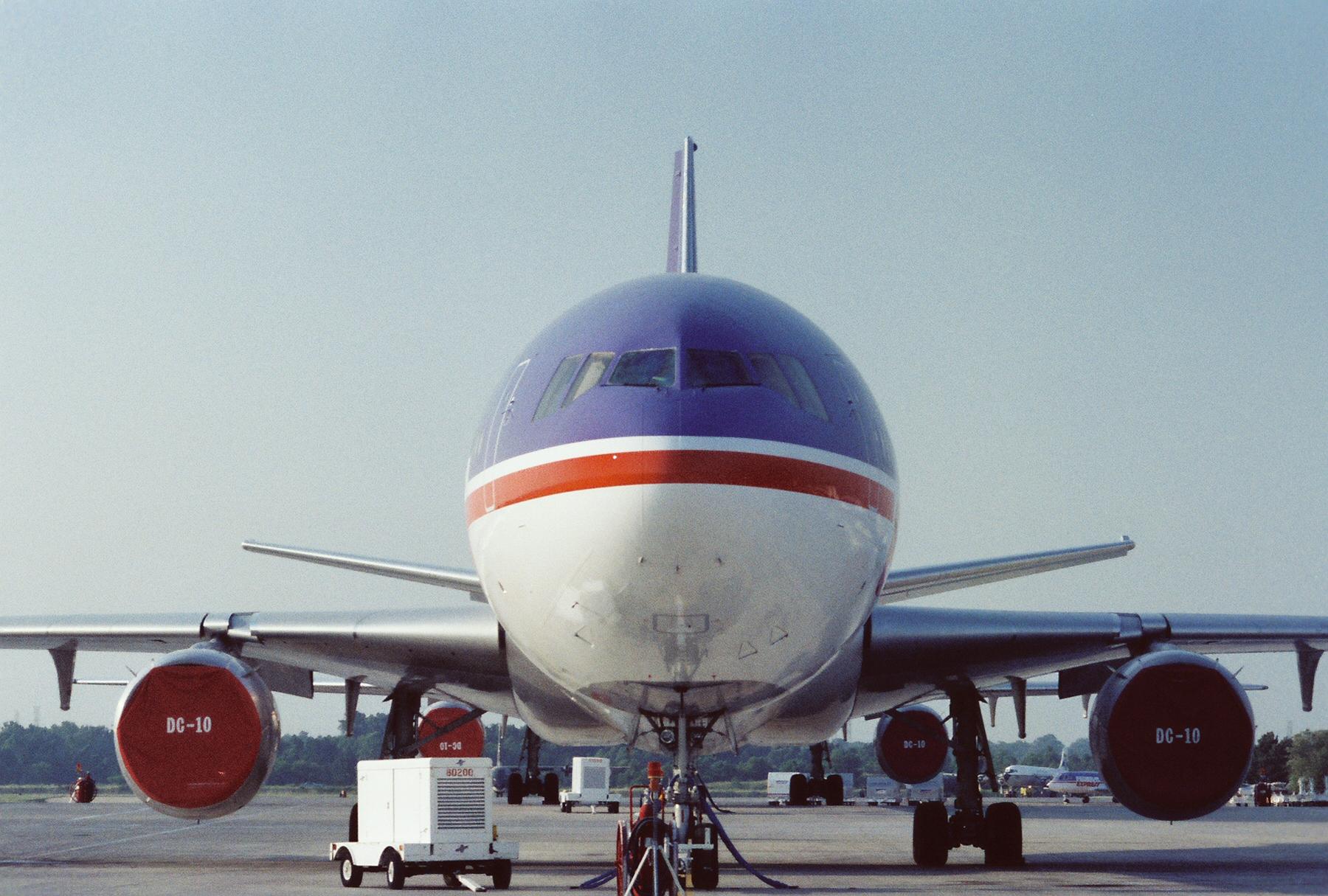 By the summer of 1980, FedEx had a fleet of just two DC-10s, both -10CF models acquired from Continental Airlines earlier that year. One of these aircraft can be seen here along with the second DC-10 and a Falcon 20 hiding in the background. According to FedEx's 1980 annual report, one DC-10 "has roughly the airlift capacity of three Boeing 727s or 18 Dassault Falcons." In other words, these two DC-10s had more payload capacity than the entire Falcon fleet. Today, a single 777F can handle that. 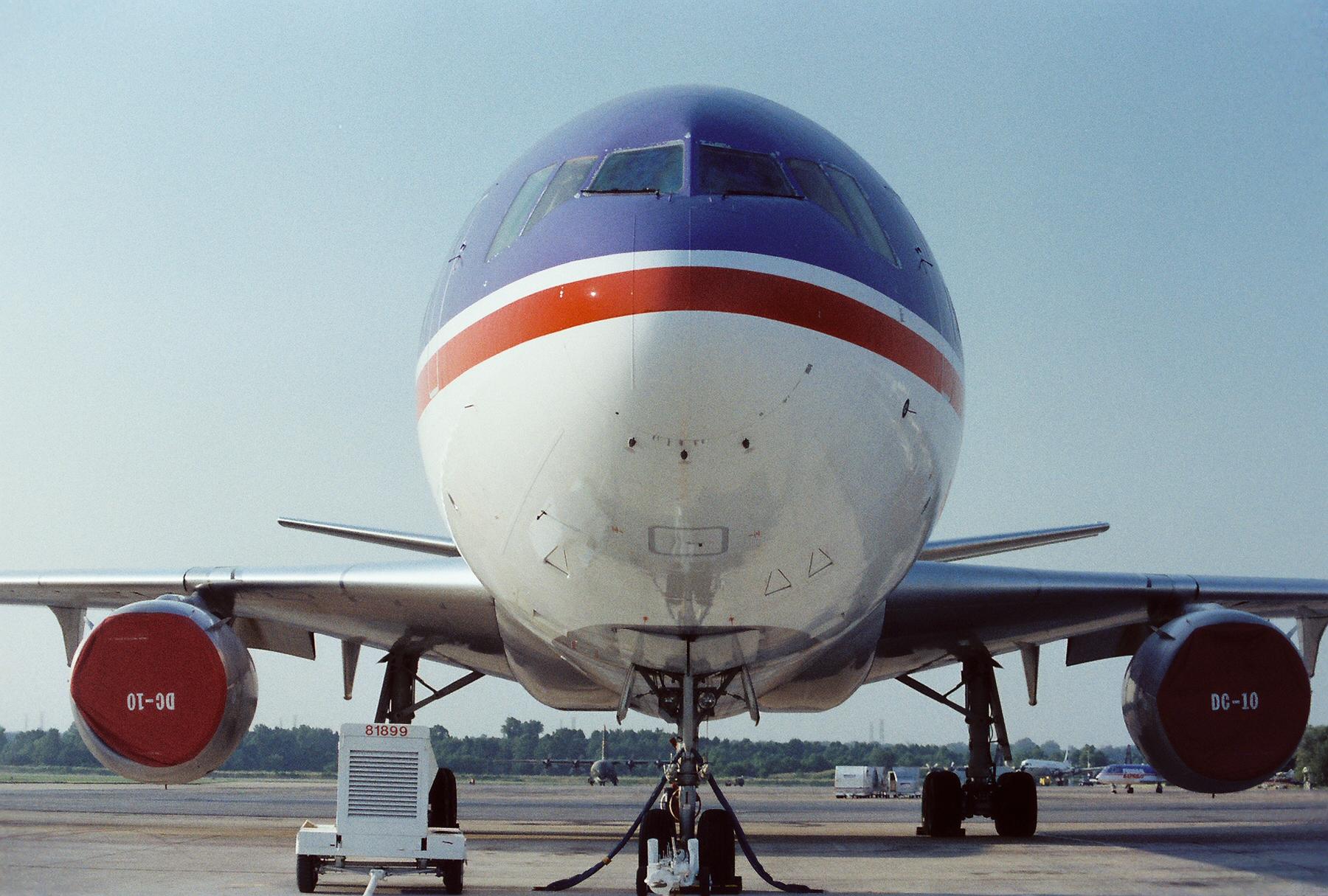 A closeup of the second DC-10 with Air National Guard ramp space far behind it, all of which FedEx would eventually take over due to its growth at Memphis International Airport. Today, FedEx has a fleet of 355 jets with designated gates/parking spots for approximately 160 of them on its Memphis ramp. 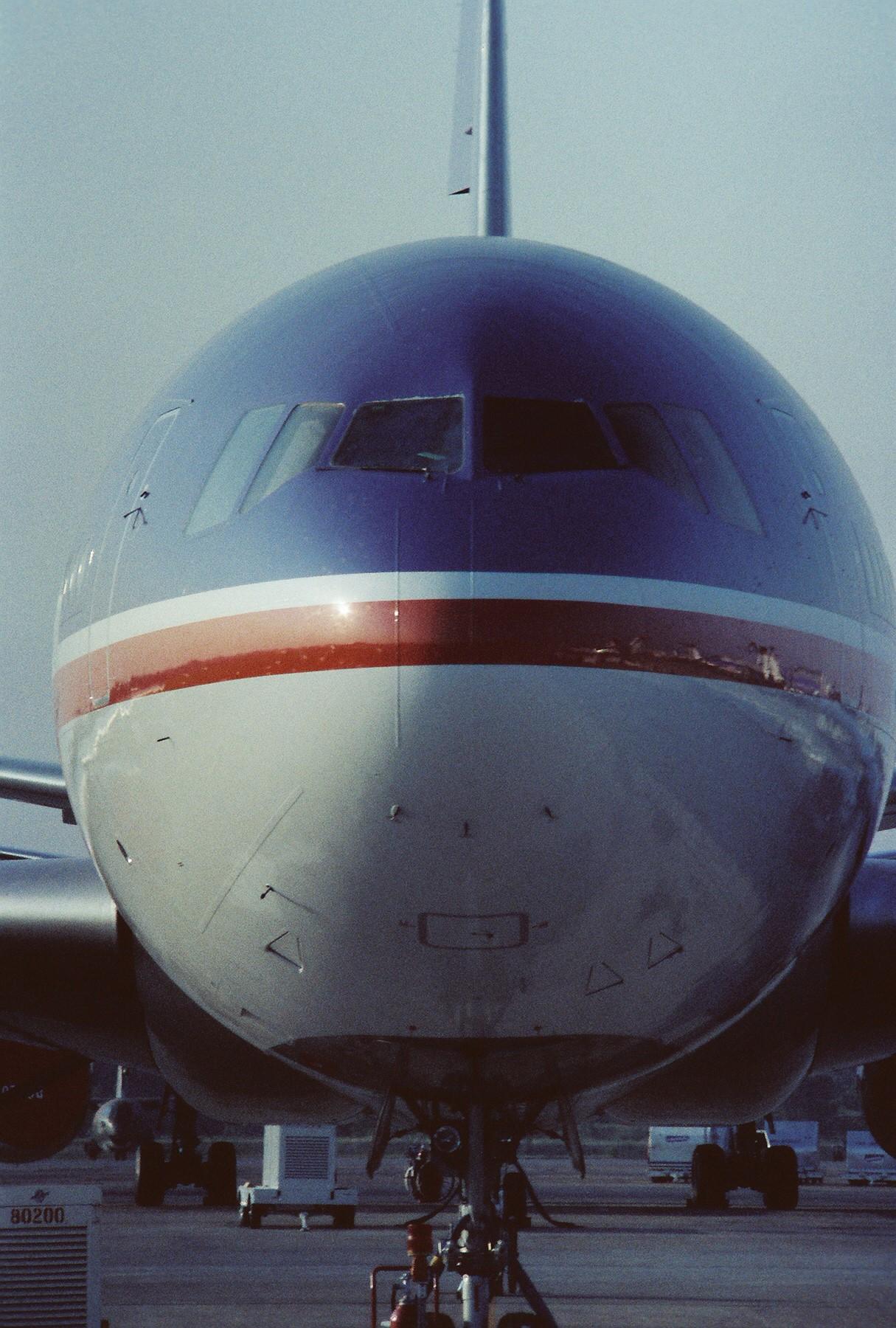 By 2010, FedEx had converted its fleet of DC-10s to MD-10s, swapping out the original three-man cockpit with a two-man, MD-11 style cockpit. The DC-10/MD-10 has been a part of FedEx's fleet for 37 years so far, longer than any other type in its history. 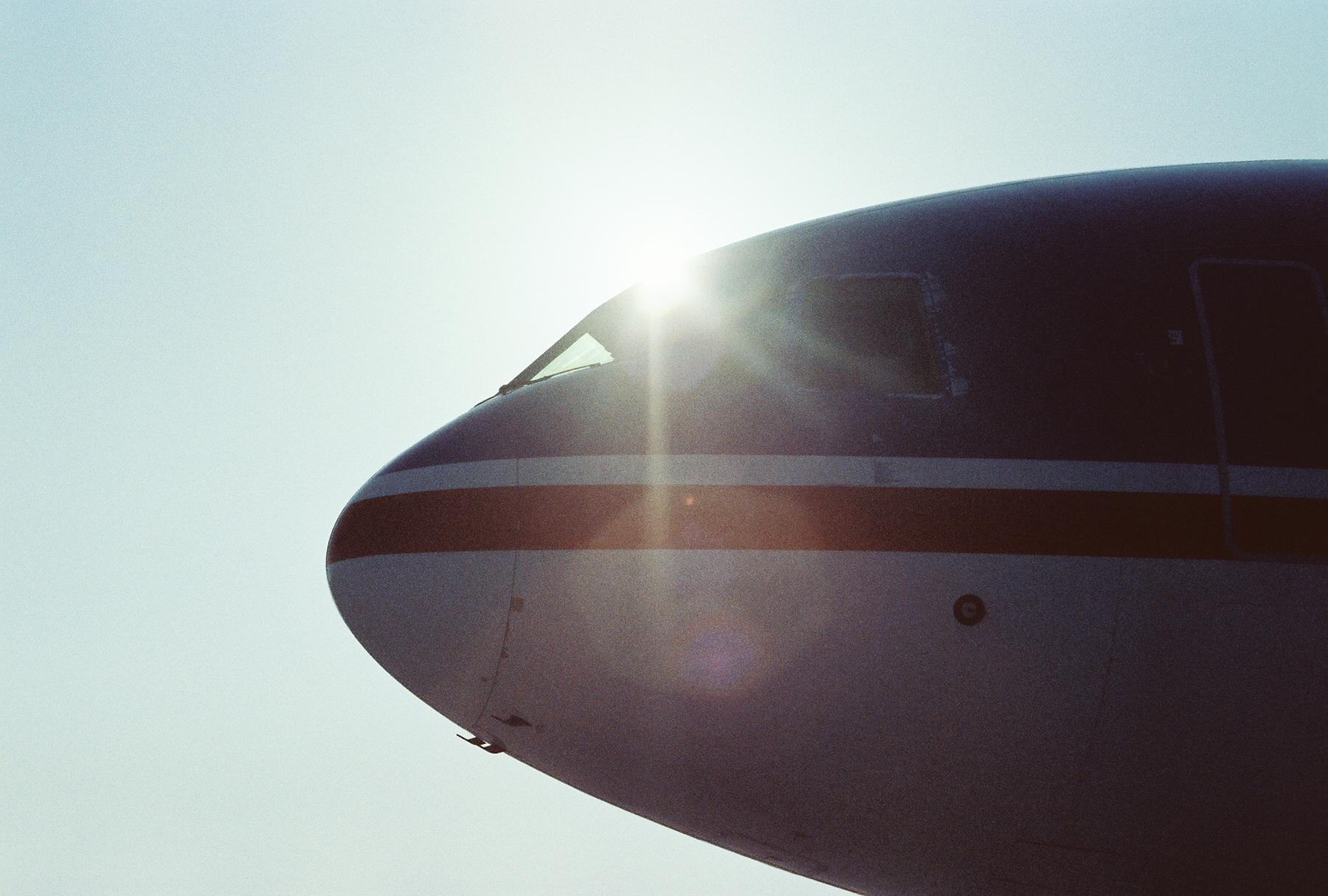 One weekend in the summer of 1980, my father took me on a tour of FedEx's ramp in Memphis not long after he joined the company as a Dassault Falcon 20 pilot. FedEx was "closed" on weekends during its early years, its entire aircraft fleet parked in Memphis waiting for the workweek to begin -- something almost unthinkable today. The photos he took while we wandered the ramp had been forgotten about until several years ago and although a few have already appeared in previous blogs of mine, they are now presented here in their entirety. These photos allow us to look back at FedEx's fleet during a time when larger aircraft, permitted after airline deregulation in 1977, had just begun to arrive on the scene to help handle FedEx's incredible growth.