Opinion: Why Nationalism And Protectionism Will Favor China

Since the first aircraft took flight, aviation has moved in lockstep with politics and national security and has been a major global socio-economic force for good. It is no coincidence that the economic and political rise of China and Asia in this century has created a major power shift in aviation geopolitics, too. Later in this decade, China is projected to overtake the U.S. as the world’s largest aviation power. The coronavirus crisis will either accelerate or slow this transition. The smart money would have to be on China’s preeminence.

Government leaders are increasingly describing the coronavirus onslaught as a world war. In fact, it is both much bigger than World War II and very different from it. This time, there are 185 countries fighting it, with more still to join, and every country is a battlefront.

Moreover, a collection of allies worked more or less in concert in World War II to defeat the common foe, a fight led in its later stages by the U.S. Today, there are few signs of a similar level of cooperation; faced with this invisible invasion, most countries have focused almost entirely inward, with no sign of leadership from the world’s largest economy.

The coronavirus has arrived at a time when nationalism, with its adverse effects on globalization, has been rising. Rather than vanquishing nationalism, as happened in 1945, winning this war appears likely to entrench it. That is bad news for the airlines.

Hopefully, the virus war will not last as long as World War II did. But even if it is over in a matter of months, the world into which we emerge will be very different from the one we left a few weeks ago. Many airlines will have died, and most survivors will have their government bailouts to thank, with overhanging obligations.

In 2021, we will be confronting a deep economic recession that the International Monetary Fund expects will be “worse” than the one following the global financial crisis of 2008-09. Back then, it took the U.S. airline market until 2014 to recover to pre-recession levels. China’s system, by contrast, bounced back with annual double-digit growth in revenue passenger kilometers every year for the decade starting in 2009, only slipping below, to 9.3%, in 2019. But these data scarcely offer a basis for extrapolating this time.

In the new world we are entering, populated mostly by government-supported airlines, the dynamics of aviation will have very different drivers from the previous  supply-demand formula. The system is likely to resemble the restrictive profile of the 1970s, now overlaid by a vigorous trade war between the U.S. and China.

Aviation and the much larger tourism industry will emerge greatly weakened and reduced in size. The international market will lag domestic recovery markedly because there will be limited synchrony between the different markets’ return to health and economic security. Combined with a likely pushback on market liberalism, the resulting constraint on airline network-planning freedom will create a further impediment to restoring the global system. The priority will be on direct links between major countries.

Network airlines rely on access to a wide range of markets around the world, and achieving critical mass depends on multiple feed routes. These factors will make life difficult for sixth-freedom operators with small or no domestic domain, particularly if liberal market access is in retreat.

China, however, has the great advantage of a massive and still growing government-supported domestic market, ensuring both a substantial airline industry and a wide range of international point-to-point connections. Its geographical positioning sets it up as a massive transfer hub—with many large transit points—straddling the major markets of Asia-Pacific and Europe, and even much of North America.

In a less liberal aviation marketplace, China is consequently likely to be the big winner. Herein lies a paradox for U.S. policymaking. The current administration’s nationalistic attitude, strongly prompted by airline unions, is likely to confine its airlines even further within an international network reliant on a low-growth—albeit historically valuable—North Atlantic market as well as Latin America, both of which appear fragile now.

Alternatively, there is a great opportunity, emulating the optimism of the post-World War II governments, to reformulate the aviation regulatory system. That would at least mean removing foreign ownership controls on airlines to allow rationalization and consolidation in a liberal framework. But that would require vision and cooperation.

Peter Harbison is chairman emeritus of CAPA – Centre for Aviation, which is part of the Aviation Week Network.

1 Comment
nlairdacmg
Fri, 04/03/2020 - 19:22
A very European traditional perspective where a dominant nation champion carrier controls access to it home market with limited access for foreign carriers via slot controls and limited competitive gates and ground handling services available. easyjet and Ryanair now control the intra-European passenger market via secondary airports. In China this would never be permitted. The US business case with 4 major national competitors is a better business case for financial viability going forward for re-entry into the international market. China would do well to pay attention to the financial success of US carriers over the past 8 years. Ned Laird-Founder Cargo Facts/Air Cargo Management . 206-779-2134

Flight Friday: How Do Asia's Flight Hours Compare To Pre-COVID? 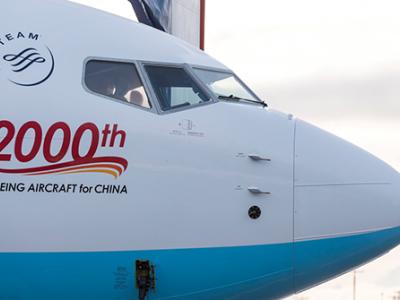