Shell signed a deal to buy sustainable aviation fuel (SAF) and cellulosic renewable diesel fuel from Red Rock Biofuels. Shell will distribute the fuel to its existing airline customers as well as marketing the US-based fuel producer’s cellulosic renewable diesel fuel. Red Rock will produce the fuel at its new biorefinery in Lakeview, Oregon. Red Rock’s biorefinery, which is scheduled for completion early next year, will be the first commercial scale plant in the world to use waste woody biomass from forests at risk of wildfire to create SAF and cellulosic renewable diesel. Shell also signed a deal with Neste Corporation that would significantly increase the supply and availability of SAF for airlines. 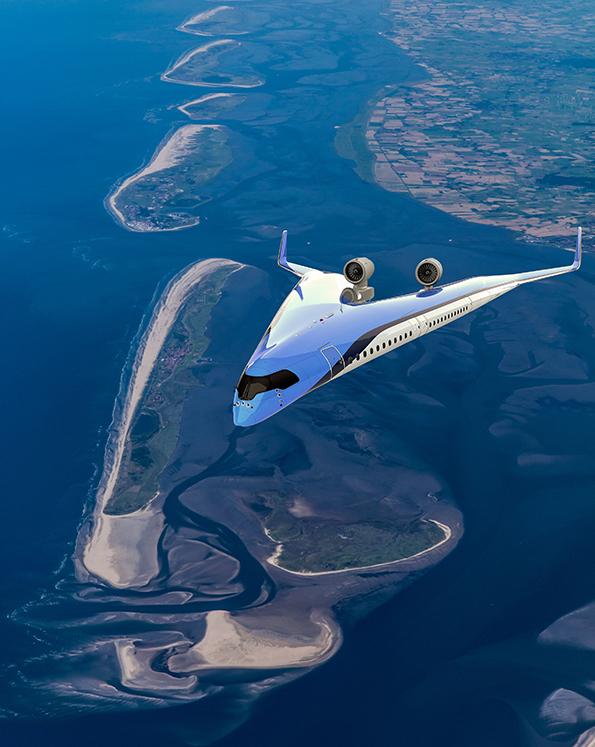 Flying-V tailless flying wing concept: With backing from Airbus and KLM, the Technical University of Delft in the Netherlands tested its Flying-V concept for an ultra-efficient airliner by conducting the first flight of a subscale model. Built to test low-speed stability and control and powered by two small electric ducted fans, the 4.7%-scale, 10-ft.-span model made the five-minute remotely piloted flight in early September at an air force base in Germany. The Flying-V is a V-shaped concept aircraft that has the same wingspan and passenger capacity as the Airbus A350 but is predicted to use 20% less fuel because the aircraft has less surface area, resulting in lower drag. The design is a tailless flying wing. Instead of a single wide, twin-aisle cabin, the Flying-V has two A320-size single-aisle cabins integrated into the V-shaped airframe along with the cargo holds and fuel tanks. 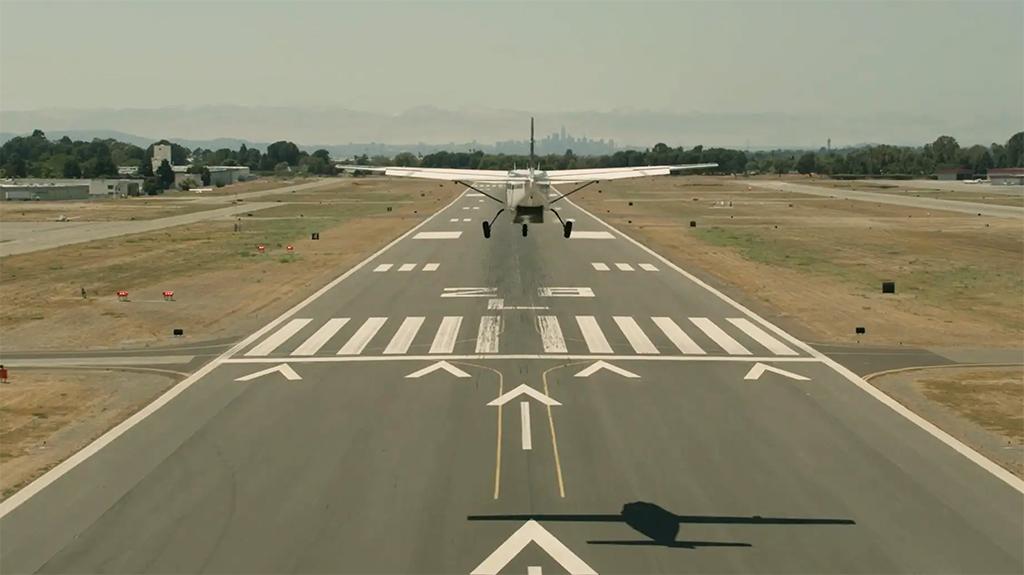 Cessna Caravan modified to unmanned operation by Xwing makes an autonomous landing during flight tests. Startup Xwing is testing a Cessna 208B Caravan modified for autonomous flight and plans to begin a piloted regional cargo operation as a step toward introducing an unmanned air logistics service over distances up to 500 mi. Since December, the San Francisco-based company has completed more than 70 autonomous flights from takeoff to landing with the converted Caravan. Xwing has also acquired a Part 135 operator and plans to begin cargo flights, initially piloted, to collect the data needed to certify the modified aircraft. Xwing also expects reduced fuel costs from flying the aircraft more precisely at peak operating efficiency points on optimized trajectories. 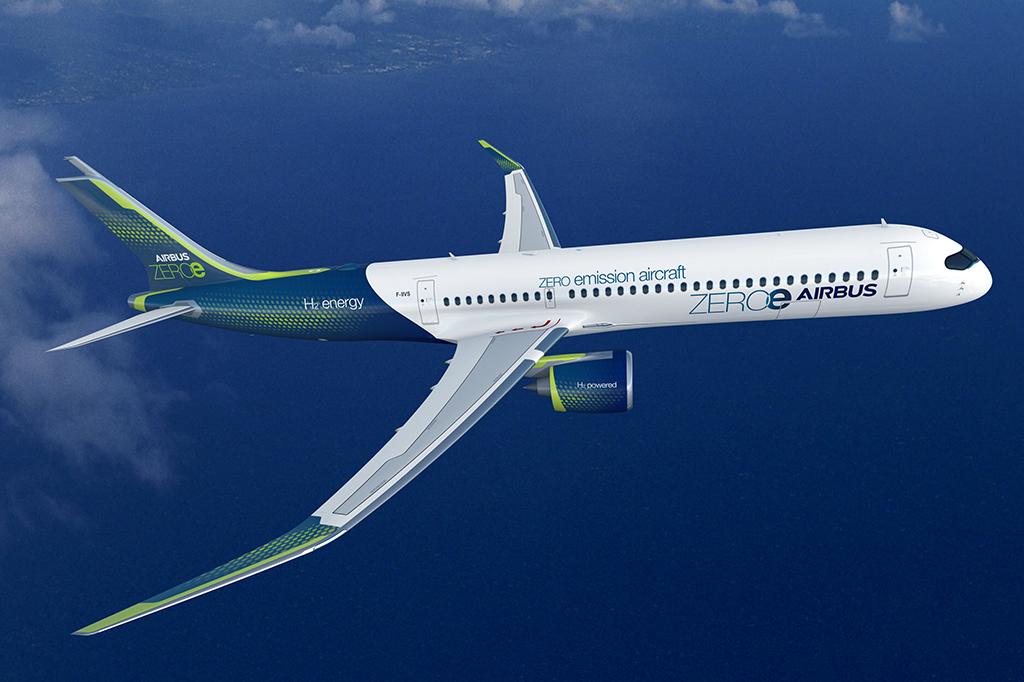 Airbus’ hydrogen-powered narrowbody concept would accommodate up to 200 passengers. Airbus is narrowing in on three concept studies for liquid-hydrogen-powered aircraft as it tries to define a next-generation commercial aircraft to enter service in 2035. The three concepts include a regional turboprop, a narrowbody in the A320neo-family size category and a blended wing body (BWB). Airbus’ timeline foresees five years (until 2025) to mature technologies and more closely define which of the three avenues it will pursue further for the 2035 aircraft. The liquid-hydrogen-powered narrowbody would likely have the most transformative effect on civil aviation. Airbus is looking at a family of aircraft with 120-200 seats and a range of 2,000 nm or more. The aircraft would be somewhat smaller than the current A320neo family, which ranges from around 130 to more than 240 seats, depending on the configuration of the A319neo, A320neo and A321neo. The narrowbody concept is planned to be designed for a Mach 0.78 cruise speed, and its liquid hydrogen combustion would be complemented by a hybrid-electric system powered by fuel cells. A range of 2,000 nm or somewhat more is significantly shorter than that of the A320neo (3,400 nm), but it would be enough to cover all of Europe. A range well in excess of 2,000 nm would be needed for US transcontinental services. 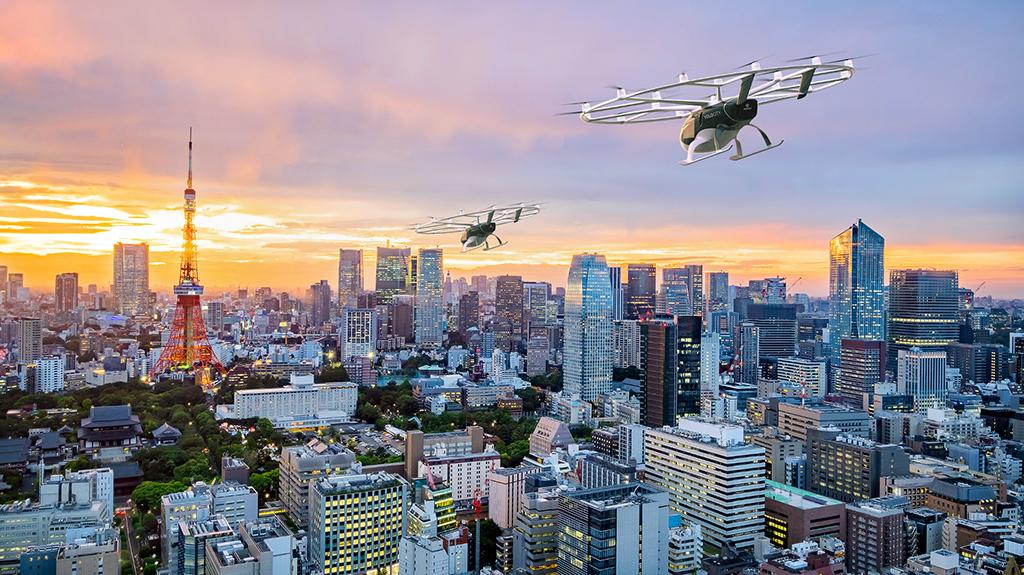 Japan Air Lines (JAL) and Volocopter plan to start urban air taxi services in Japan within three years. The pair will promote the development of urban air mobility (UAM) for passenger and cargo transportation in Japan. The airline and the German electric vertical-takeoff-and-landing (eVTOL) air-taxi developer plan to prepare for the commercial launch of UAM within the next three years. 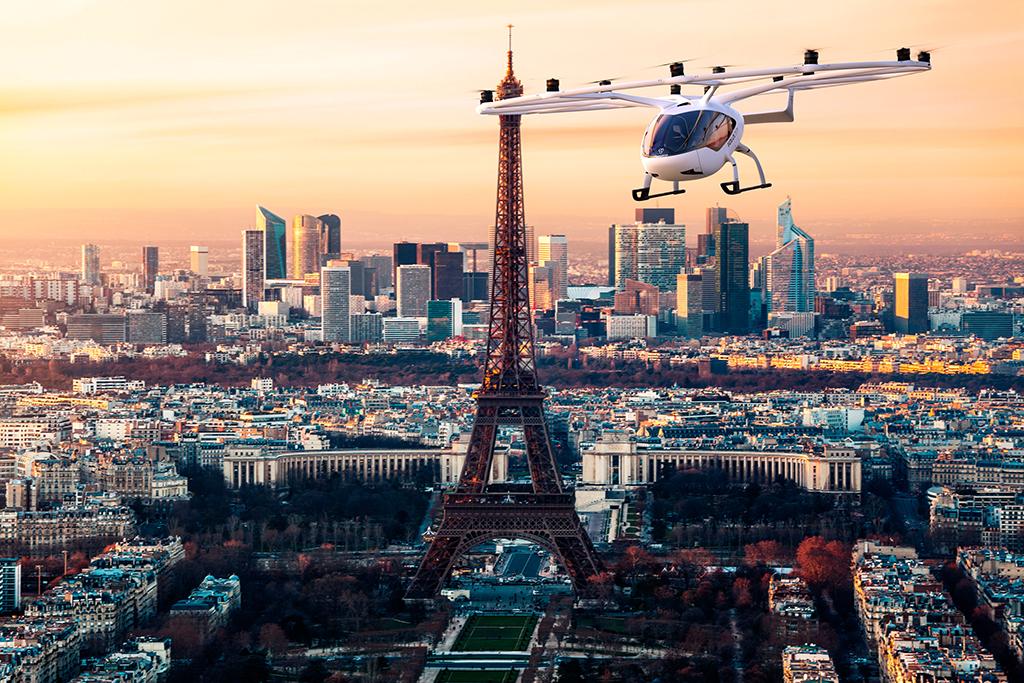 Volcopter plans to fly its VoloCity air taxi, its production design, in the Paris test area. Germany’s Volocopter is the first manufacturer to sign up to test its electric vertical-takeoff-and-landing (eVTOL) vehicle in the Paris region with the goal of showcasing air taxi operations during the 2024 Olympics. The Re.Invent Air Mobility initiative has been launched by the Paris Ile-de-France regional administration, airport operator ADP Group and public transport operator RATP Group. The partners, with Airbus, previously conducted a feasibility study into demonstrating urban air mobility (UAM) using eVTOL vehicles during the 2024 Olympic and Paralympic Games. In cooperation with French civil aviation authority DGAC, parking, takeoff and landing operations, as well as operations around the vehicle, whether maintenance or recharging, will be tested in an actual aviation environment in June 2021. Bids are being sought in vehicle development, ground infrastructure, airspace integration, operations and public acceptance. Selected projects will be able to experiment in a secure “sandbox” environment at Pontoise-Cormeilles. The schedule calls for sandbox experiments from 2021-24, leading to the Olympics showcase and followed by project scale-up from 2024-30. This is the first announced demonstration involving the company’s yet-to-fly production eVTOL, planned for certification in 2022. 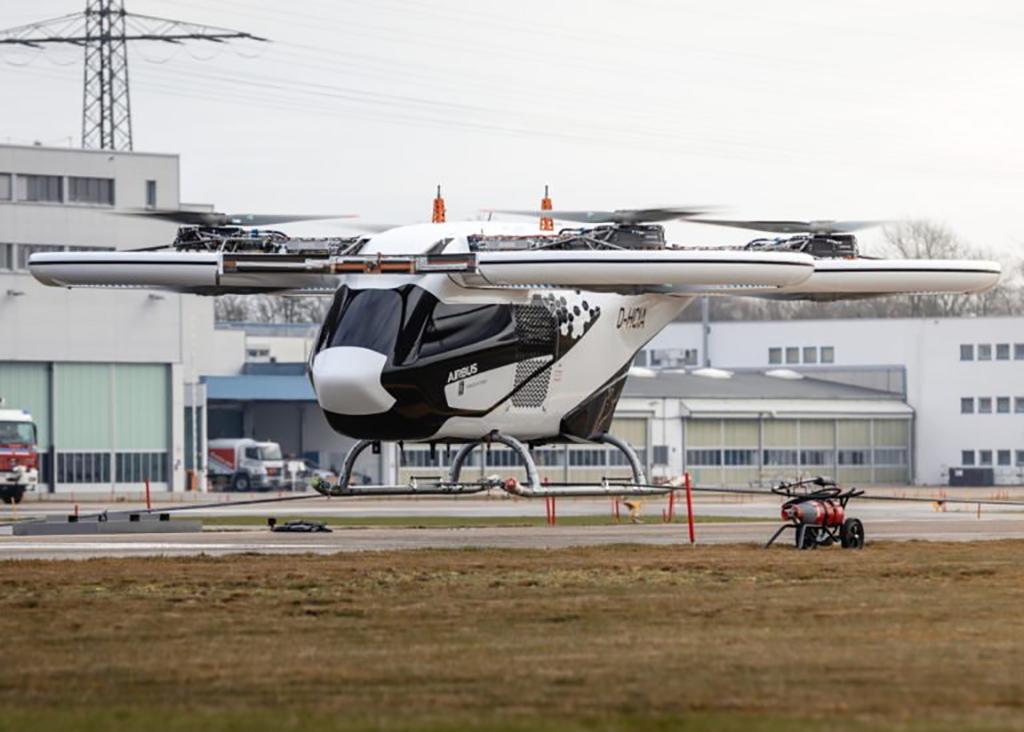 Airbus began autonomous flight tests of its CityAirbus eVTOL demonstrator at Ingolstadt Manching Airfield. In September 2020, the Bavarian government decided to support the unmanned aerial mobility (UAM) initiative in Ingolstadt, Germany, with €100 million, beginning with €15 million in 2021 and €25 million in 2022. Airbus is testing its CityAirbus eVTOL air taxi demonstrator at Ingolstadt Manching Airfield. The 2,200-kg (4,850-lb.) multirotor CityAirbus can carry a 400-kg payload and Airbus is preparing a version of the aircraft that can carry passengers for flights during the Paris Olympics, Thomasz Krysinski, vice president of research and innovation at Airbus Helicopters, told the Vertical Flight Society’s virtual Forum 76 conference on Oct. 6. 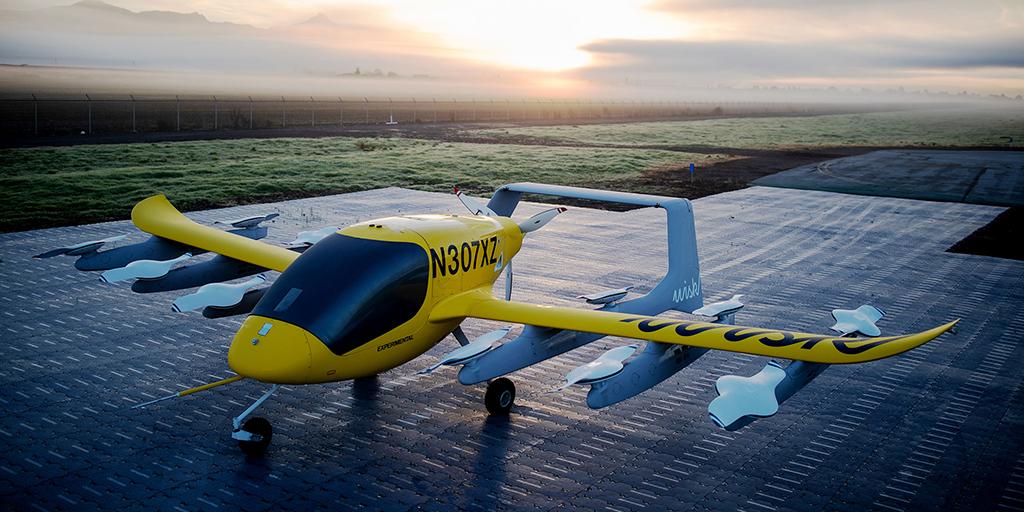 Wisk is working with the New Zealand Civil Aviation Authority to certify the Cora for commercial service. Wisk, a joint venture between Kitty Hawk and Boeing, plans to begin trial commercial service of German electric air-taxi startup Lilium this year in New Zealand. It will conduct aerial tourism flights with its Cora two-seat, self-piloted electric vertical-takeoff-and-landing (eVTOL) air taxi from Tekapo, on South Island. Transit officials for Florida’s Tampa Bay area are also interested in becoming a test site for air-taxi services. Lilium presented its piloted, four-passenger eVTOL as a faster alternative to taxis for short trips across Tampa Bay to St. Petersburg as well as a more convenient option than the airliner for longer regional flights to Orlando and beyond in Florida. The Lilium Jet is designed to fly 185 mi at 185 mph. A smaller aircraft, the Cora is designed to provide a range of about 25 mi. at 100 mph. Both are battery powered. After Lilium’s presentation in July, TBARTA officials voted to begin negotiations with the German startup to become a US test site for its banded air taxi service. 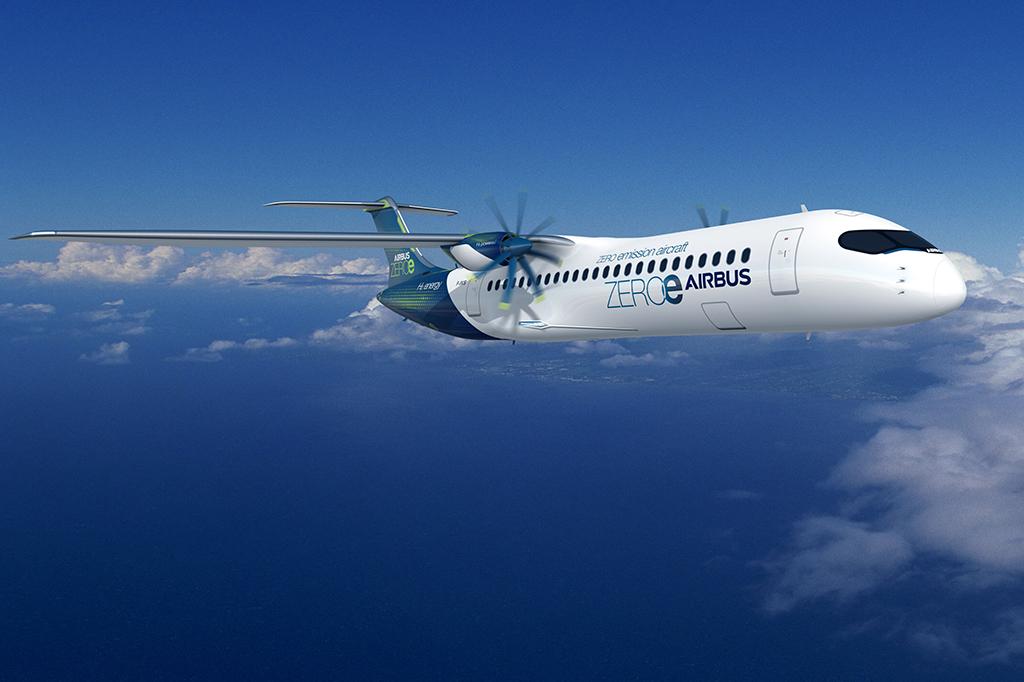 ATR partner Airbus is studying a short-haul airliner that would burn hydrogen in modified turboprop engines. ATR is pursuing hydrogen propulsion as the most feasible path to substantially reducing the carbon emissions of its regional aircraft. The Airbus/Leonardo partnership is targeting a CO2 reduction of at least 30% from around 2026 onwards. 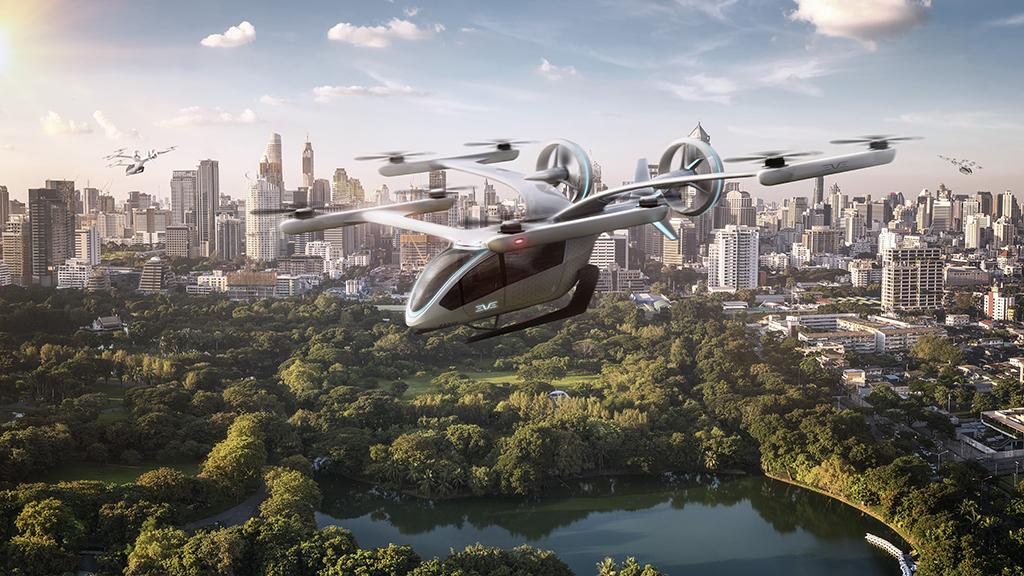 Scheduled helicopter operator Helijet has ambitions to operate eVTOLs on existing and new longer routes. The Canadian Advanced Air Mobility consortium has been launched in Vancouver, British Columbia, with the goal of accelerating the development and commercialization of electric vertical-takeoff aircraft. Created by Canadian Air Mobility and the National Research Council of Canada, the consortium has more than 20 members at launch, including rotorcraft manufacturer Bell, scheduled helicopter operator Helijet International, Vancouver transportation authority TransLink and charter operator Iskwew air. Among the objectives of the Canadian Advanced Air Mobility (CAAM) consortium is to create an innovation hub to help small and medium-size companies mature their technologies for low readiness level to certification and commercialization. 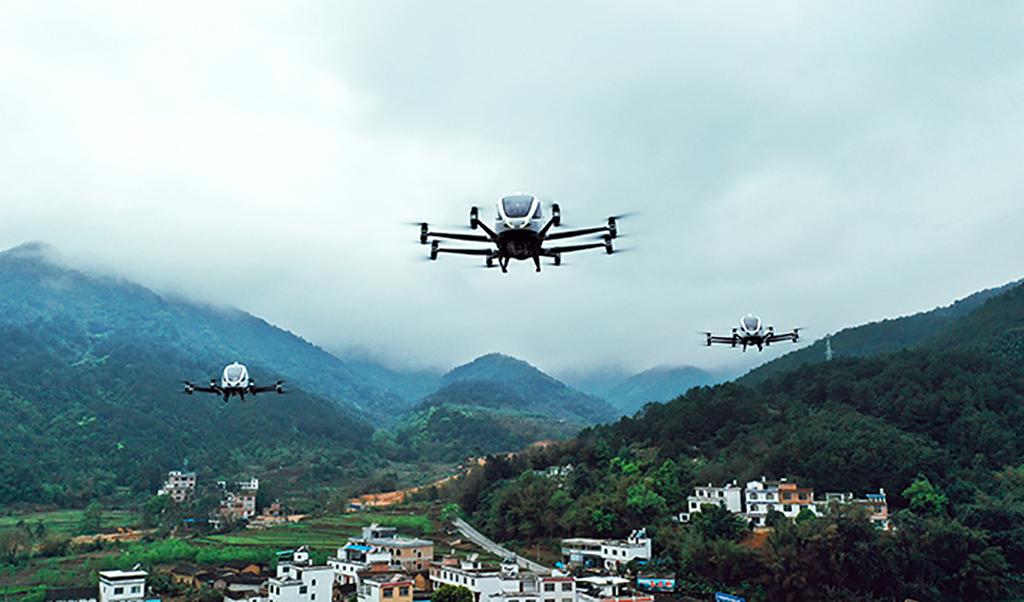 As it looks ahead to certifying its VoloCity electric air taxi by the end of 2022, Germany’s Volocopter is working with a Lufthansa subsidiary to build the digital backbone for its planned urban air mobility service. The startup is cooperating with Lufthansa Industry Solutions in developing VoloIQ, a proprietary urban air mobility (UAM) software platform that will be the operating system for Volocopter’s branded air taxi service. VoloIQ will run on Microsoft’s Azure cloud computing service.

Industry players agree the end goals for aviation sustainability are more important than ever, and research and development continues in projects aimed at producing highly efficient, low-emissions airliners as well as widening the supply of affordable sustainable aviation fuel.

Airbus A380 History
From The Archives: A Timeline Of The 747