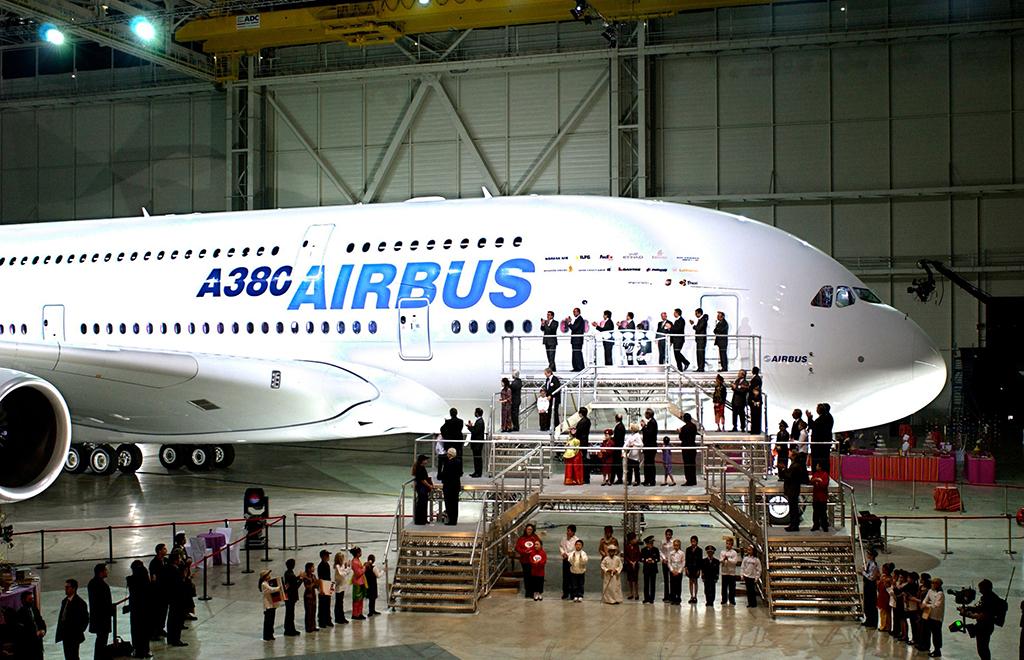 The Airbus A380 was revealed to the world on Jan. 18, 2005. Fourteen launch customers had already ordered 149 of the superjumbos and Airbus believed it could sell some 1,500 of the massive aircraft. Photo credit: Airbus 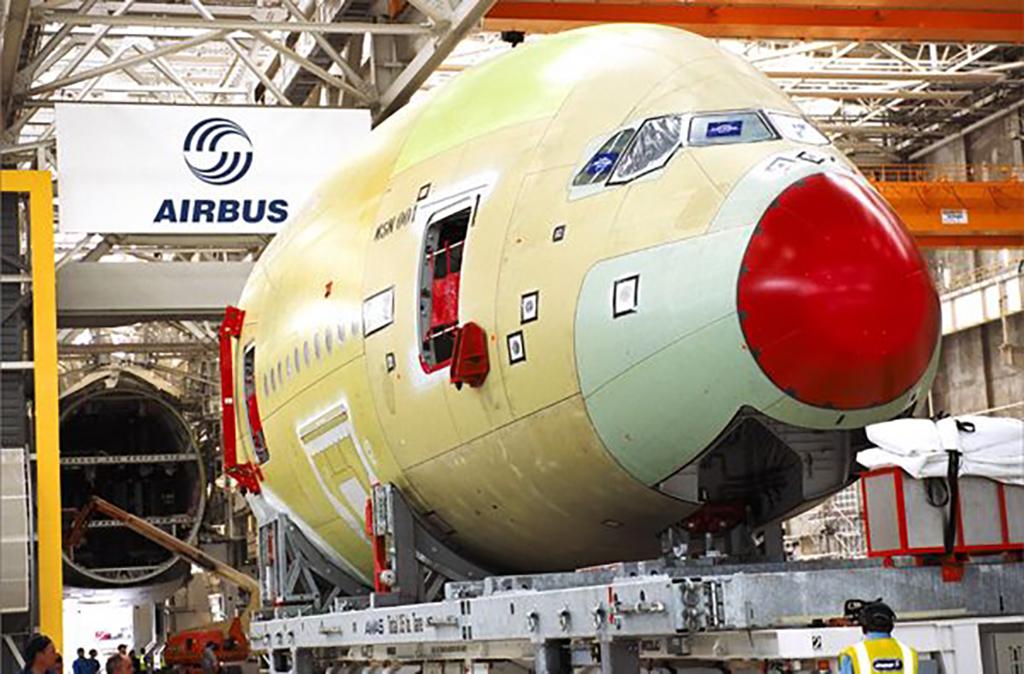 The first A380 under construction at the Airbus final assembly line in Toulouse, France. The aircraft is made up of more than 4 million parts supplied by around 1,500 companies in over 30 countries. Photo credit: Airbus 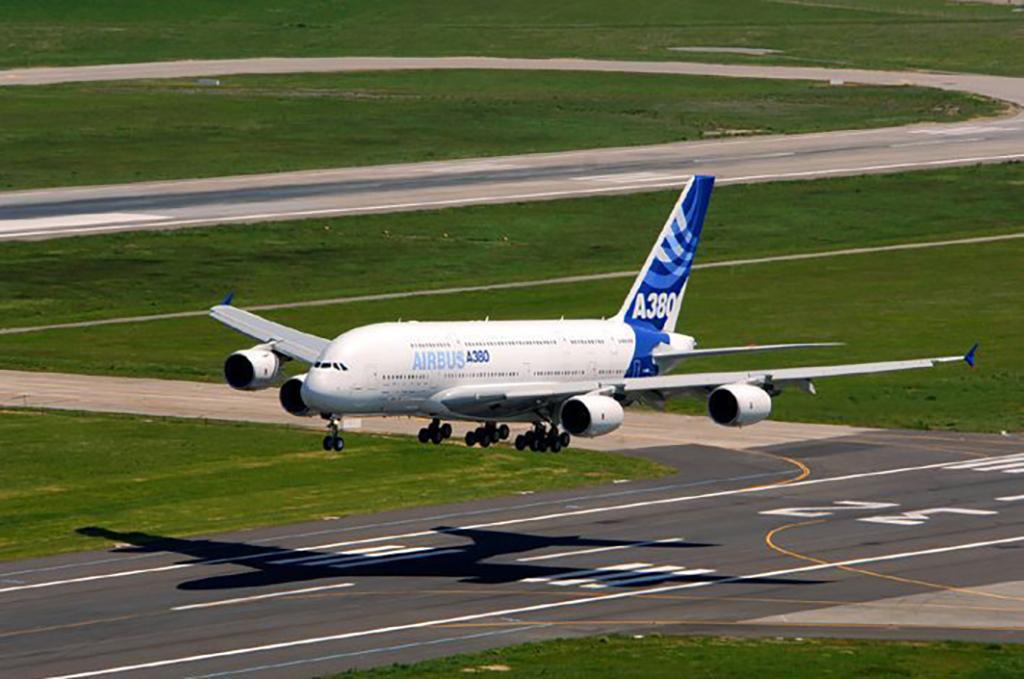 The A380 completes its first flight on April 27, 2005. The aircraft flew for nearly four hours before landing at Toulouse-Blagnac International Airport. Photo credit: Airbus 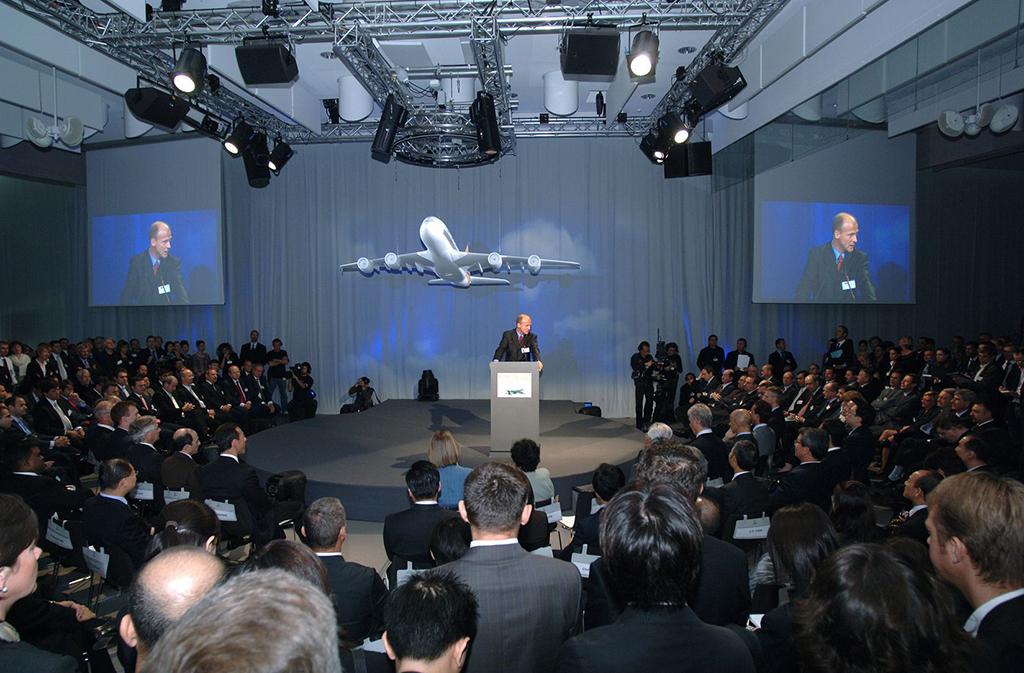 The first A380 was delivered to Singapore Airlines on Oct. 15, 2007, in Toulouse. It entered commercial service 10 days later on a flight from Singapore to Sydney. The flight gained media attention not just because of the A380’s double-deck size but because the carrier had included first-class private suites with double beds. Singapore Airlines would eventually receive 18 more of the aircraft. Photo credit: Airbus 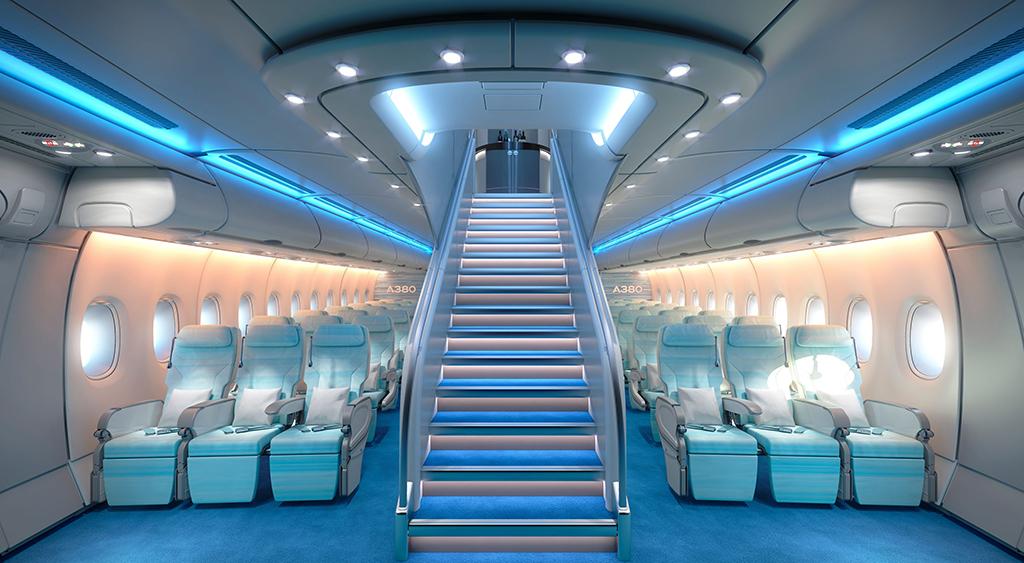 In its four-class standard layout, stairs lead from the A380’s premium economy cabin to the upper deck. The aircraft has a typical seating capacity of 400 to 550, depending on the configuration, and a maximum capacity of 853 passengers. Photo credit: Airbus 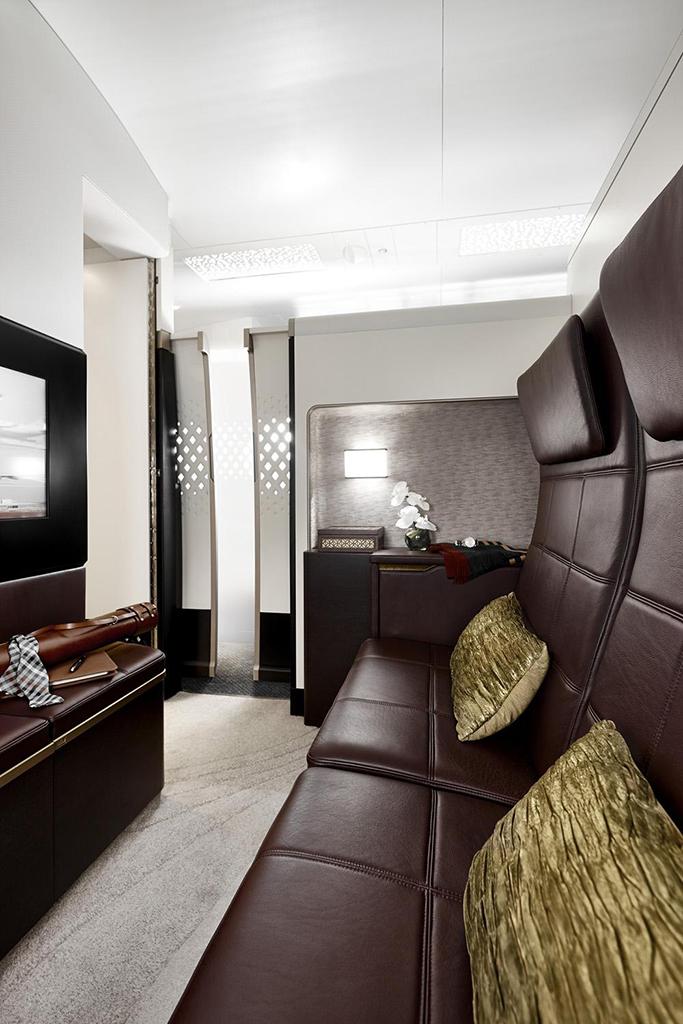 ‘Apartment in the sky’

Etihad Airways offers a three-room “apartment in the sky” on the A380 called the Residence, featuring a living area, bedroom and shower room. Residence passengers are attended to by a private butler and receive customized menus. Photo credit: Airbus 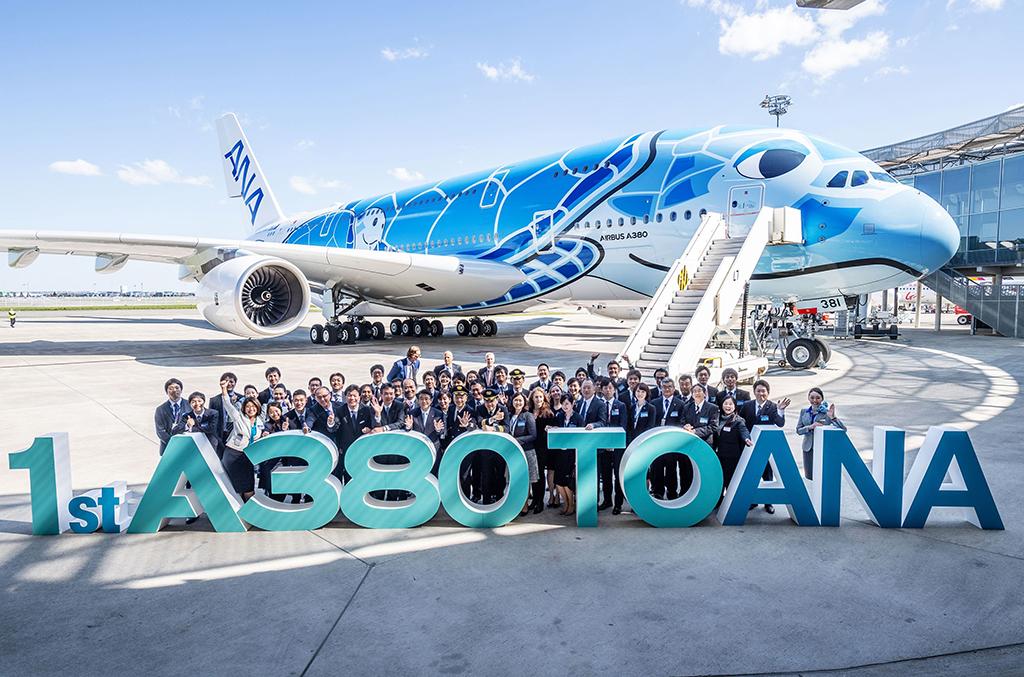 The special livery on All Nippon Airways' first A380, delivered March 20, 2019, represents the Hawaiian green sea turtle to raise awareness about the endangered species. ANA operates two A380s in the turtle livery on its Tokyo Narita-Honolulu routes and plans to put another into service soon. Photo credit: Airbus 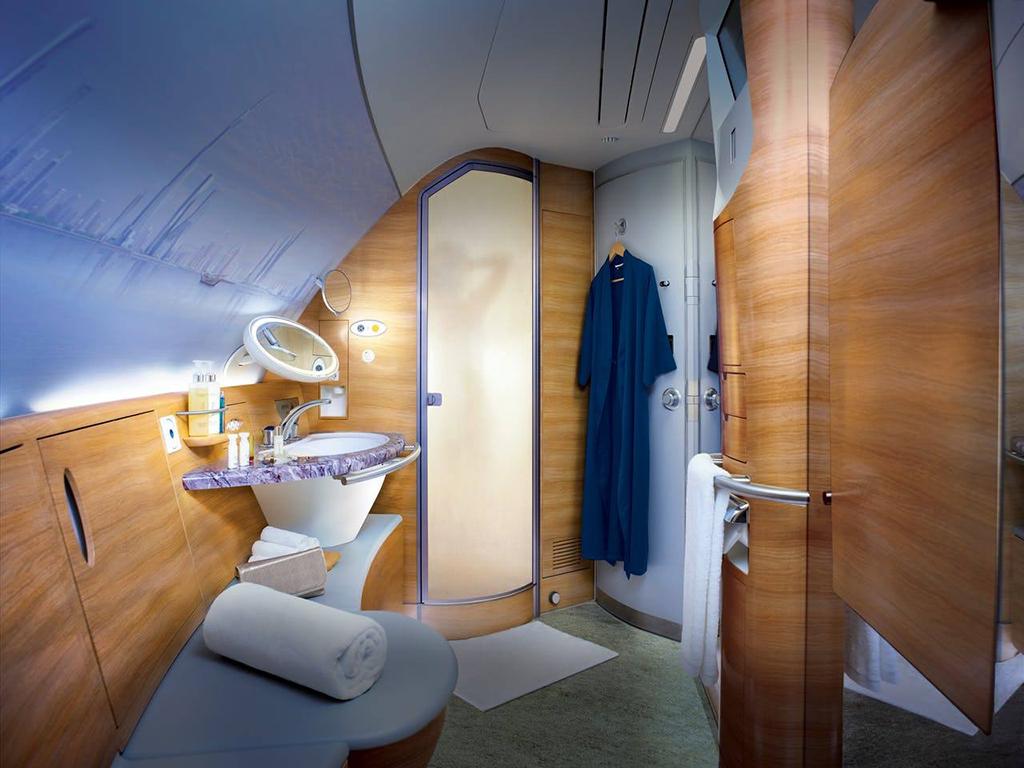 Emirates Airline offers amenities such as two first-class shower spas on each of its A380s. Emirates is the biggest customer A380 by far, with 115 in its fleet and eight more on order. The carrier also operates the longest and shortest A380 flights in the world: Dubai-Auckland at 14,193 km (8819 mi.) and Dubai-Muscat at 340 km (211 mi.). Photo credit: Emirates Airline 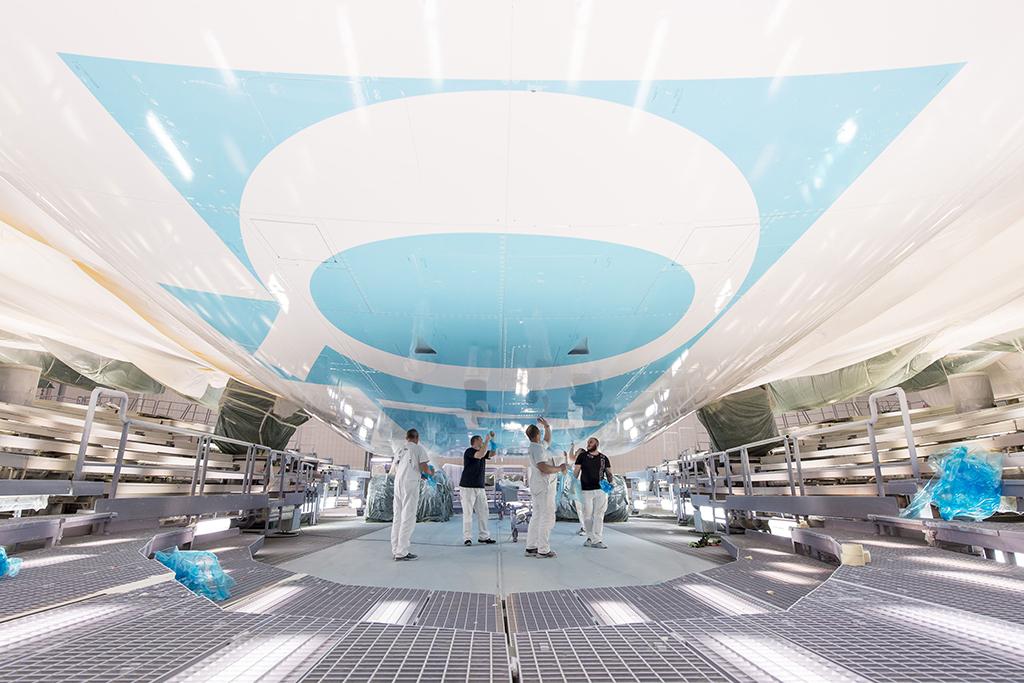 Qatar Airways’ first A380 receives its distinctive livery ahead of the milestone delivery in 2014. The airline would go on to operate 10 A380s in a three-class configuration with a capacity for 517 passengers. Photo credit: Airbus 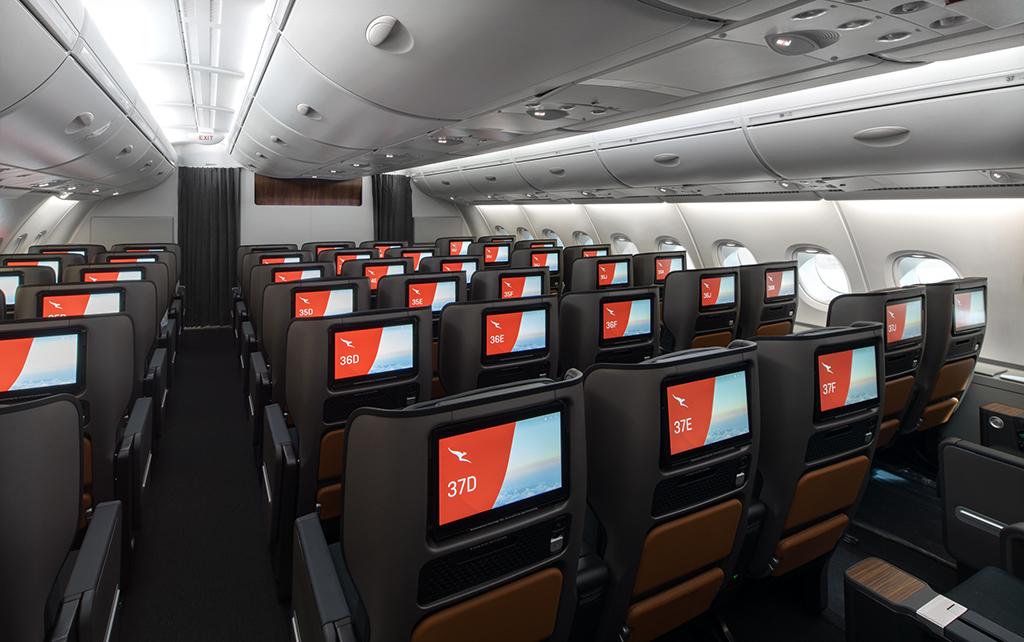 Qantas is undertaking a major upgrade of the cabins in its 12 A380s. The refurbishment program, in response to increased demand for premium cabins on flights to the US, Europe and Asia, will add six business and 25 premium economy seats to each aircraft. Work is scheduled to be completed by the end of the year. Photo credit: Qantas 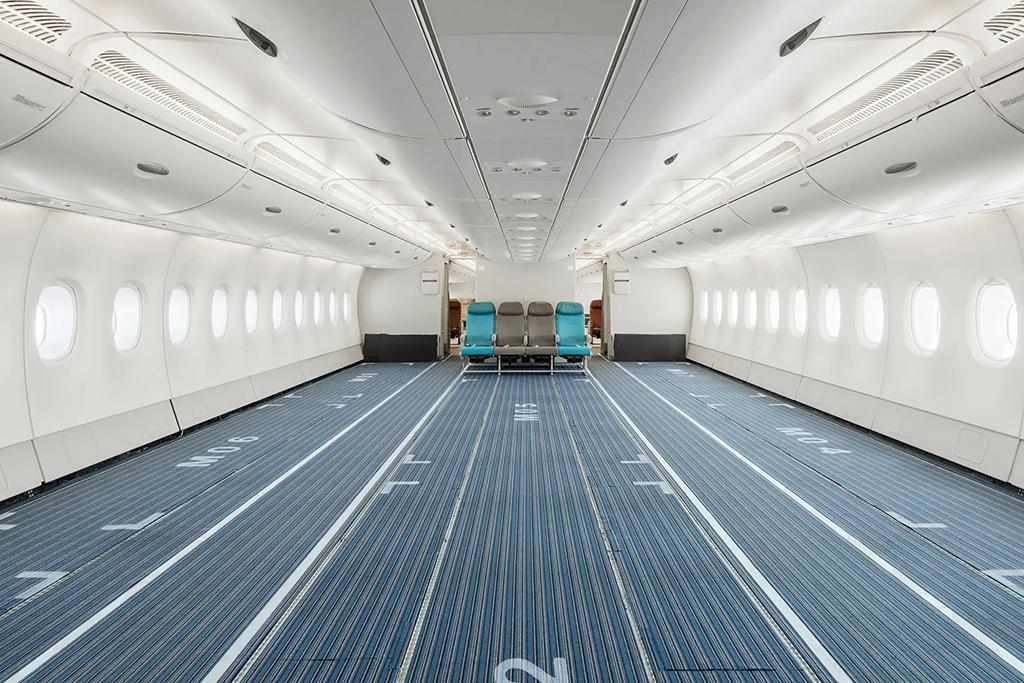 Making room in a crisis

Portuguese wet-lease specialist Hi Fly removed the seats from the economy cabin of its sole A380 to meet high cargo demands for critical medical supplies during the covid-19 crisis. Photo credit: Hi Fly 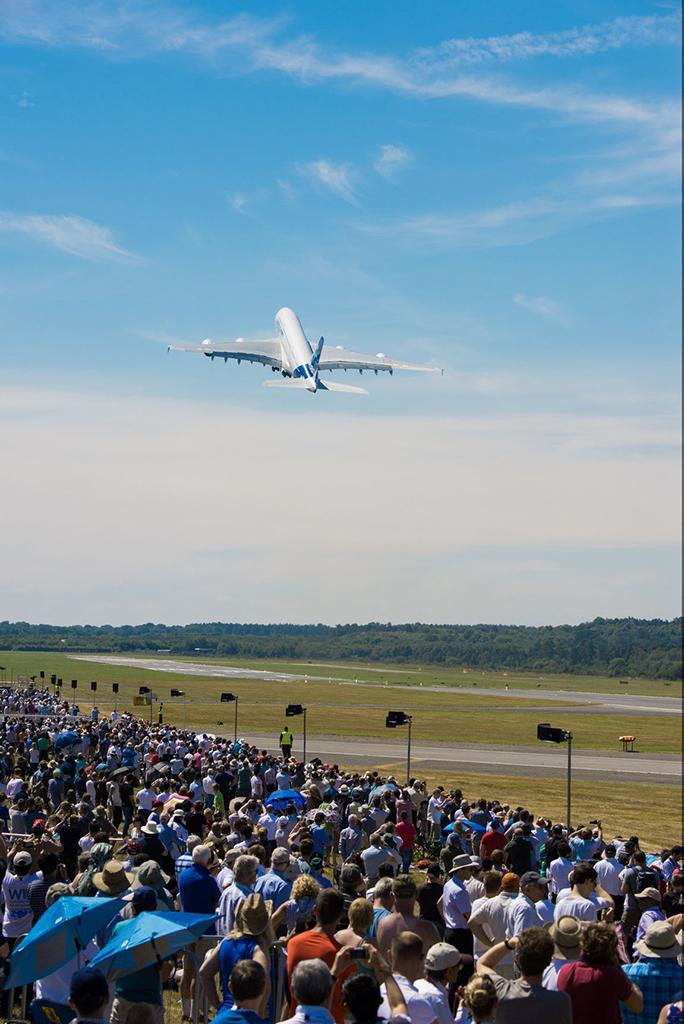 End of the line

An A380 performs a flying display at the Farnborough Airshow in March 2020. Despite Airbus’ high hopes for the double-deck aircraft, sales never met expectations as a changing market saw airlines preferring twin-engine widebodies such as the Airbus A350 and Boeing 787. Instead of the 1,500 it had hoped to sell, Airbus received orders for just 251 A380s, and in February 2019 announced the end of the program. Eight remain on order with deliveries expected to end in 2021. Photo credit: Airbus

When Airbus conceived the A380, the world’s largest commercial airliner, the company believed there was a market for a superjumbo that would boost airlines’ ability to maximize slot-constrained hubs on the world’s busiest routes. By the time the aircraft entered service in 2007, however, emerging trends, including a shift toward long, thin point-to-point routes, saw airlines preferring newer, twin-engine widebodies. The A380 was popular with passengers, but sales never approached Airbus’ expectations, and in February 2019 the company announced it would end the program.

3 Comments
skywayparkblue
Thu, 02/11/2021 - 19:32
It would be interesting to know the cumulative economics of the thing, including the cost of borrowing and the implied governmental financial support. In fact, AW ought to generate a tabulated study for the financia picture for current and past airliners -- visa vie "The Sporty Game."
gwroble
Sat, 07/17/2021 - 15:59
Even after the program is shut down and the last aircraft scrapped, the A380 will retain its position high on the list of the world's ugliest airliners.
andrusgd
Tue, 07/20/2021 - 06:29
The A380 was always a European public works program. The many government loans were only required to be repaid when the A380 program became profitable (duh). People remained employed, and the European aerospace industry remained healthy, instead of furloughing thousands & paying welfare for idle populations.