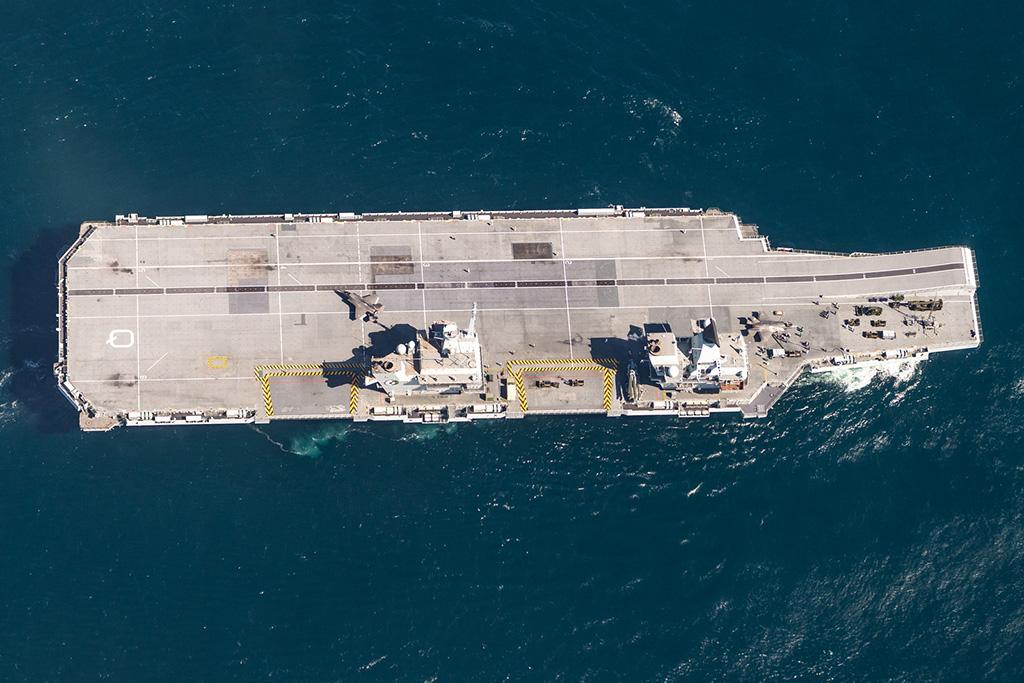 Britain is in the process of completing two Queen Elizabeth-class aircraft carriers. HMS Queen Elizabeth put to sea for the first time in June 2017 and was commissioned into service last December. Initial trials have enabled helicopter operations with the Leonardo AW101 Merlin and Boeing CH-47 Chinook. The second ship, HMS Prince of Wales, is being fitted out at the Rosyth Dockyard in Scotland and is expected to join the Royal Navy in 2019. 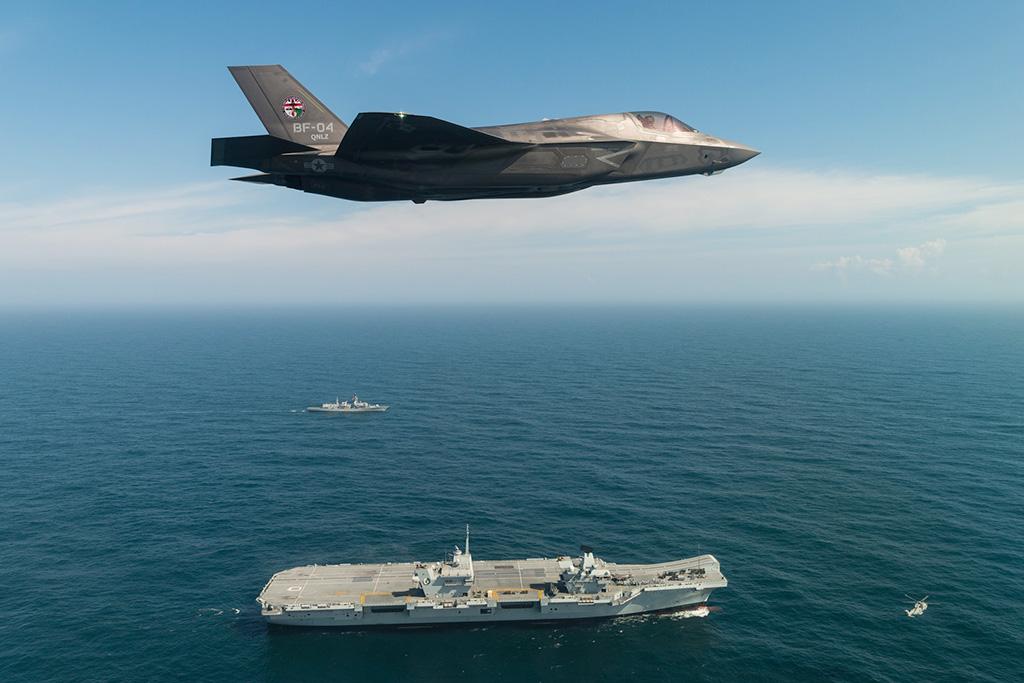 The first aircraft to embark on the Queen Elizabeth were two U.S.-marked F-35Bs, one from the F-35 Integrated Test Force (aircraft BF-4) and another from the VX-23 “Salty Dogs,” a Naval Air Systems Command Air Test and Evaluation Sqdn. The UK Defense Ministry had some concerns about the perception of U.S.-marked aircraft making the first landings on the new carrier and the potential reaction from the UK mainstream media, but the developmental test aircraft from Patuxent River NAS, Maryland, are the most appropriate assets for the trials because of their extensive instrumentation suites. 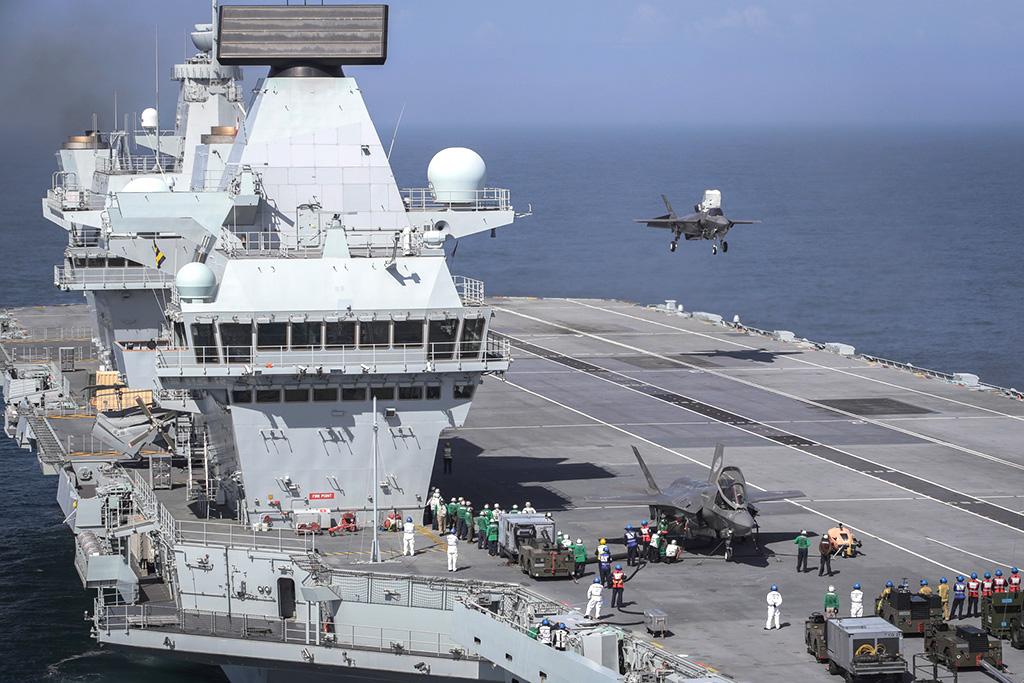 Initial trials see the F-35Bs making their approach over the water, before transiting over the deck to make a landing on the Queen Elizabeth’s enormous 4-acre flight deck. Later the test pilots will trial the Shipborne Rolling Vertical Landing (SRVL), a low-speed rolling landing that has been developed to increase the aircraft’s bringback capability and reduce the need for crews to jettison expensive stores to lower landing weights, particularly during operations in warmer parts of the world. 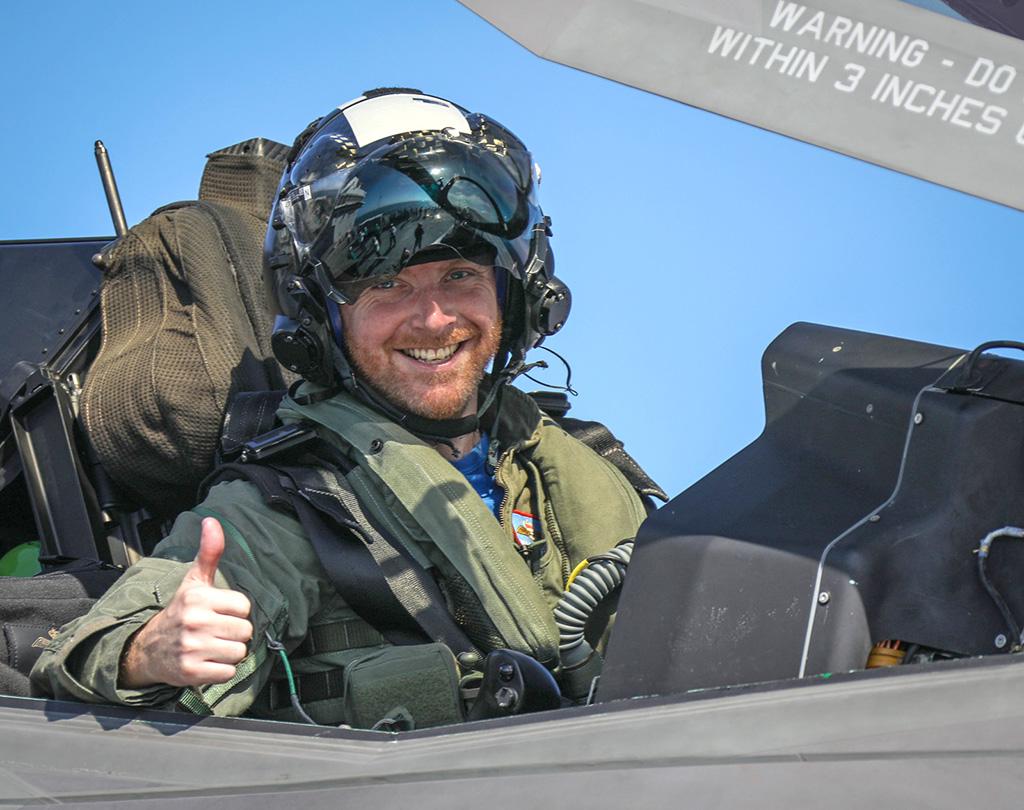 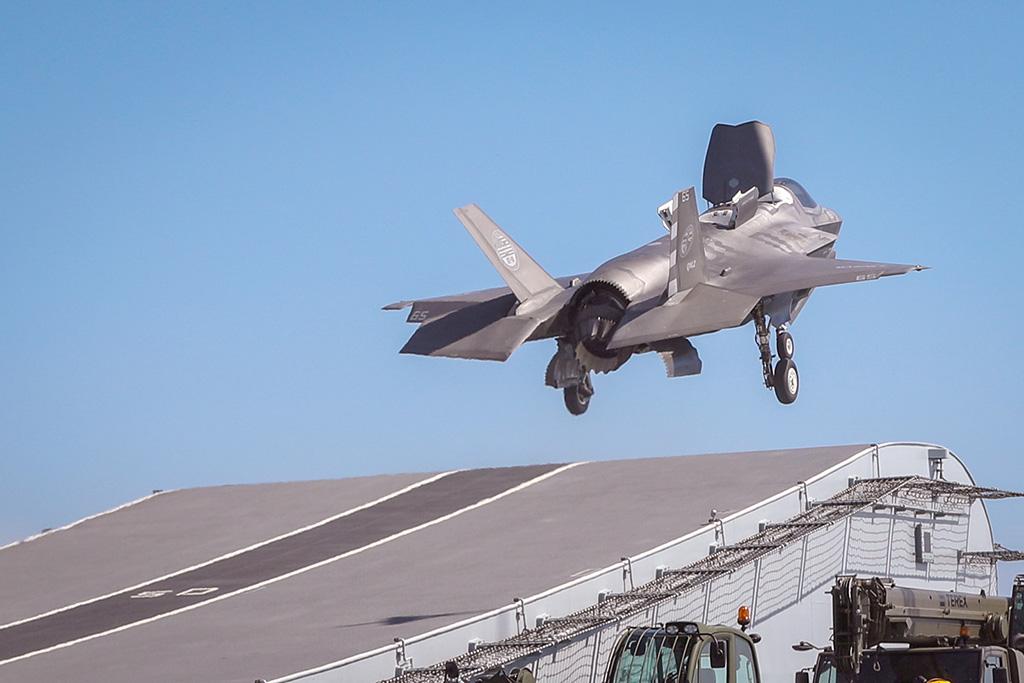 A British Way To Get Airborne

Unlike the flat-deck amphibious landing ships employed by the U.S. Marine Corps, F-35Bs operating from the Queen Elizabeth-class will take off using a ski jump. Originally developed by the British for use with the Harrier, the ski jump is 200 ft. long, angled at 12.5 deg. and designed to reduce the required deck roll on takeoff by up to 50%, or allow an increased payload of up to 20%. 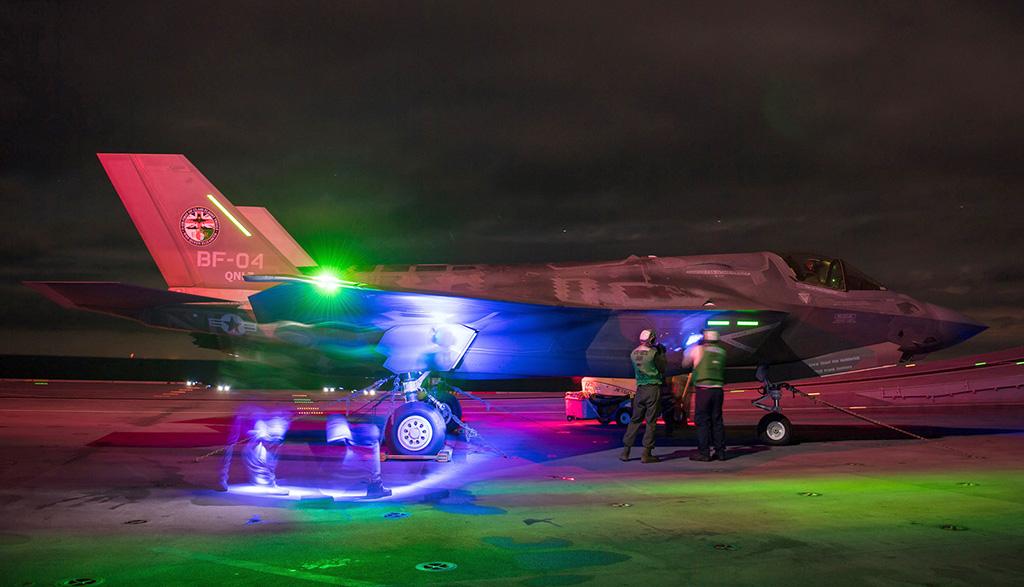 Within days of the first landings and takeoffs on Sept. 25, the test pilots also began flight operations at night resulting in some spectacular imagery and long-exposure images. 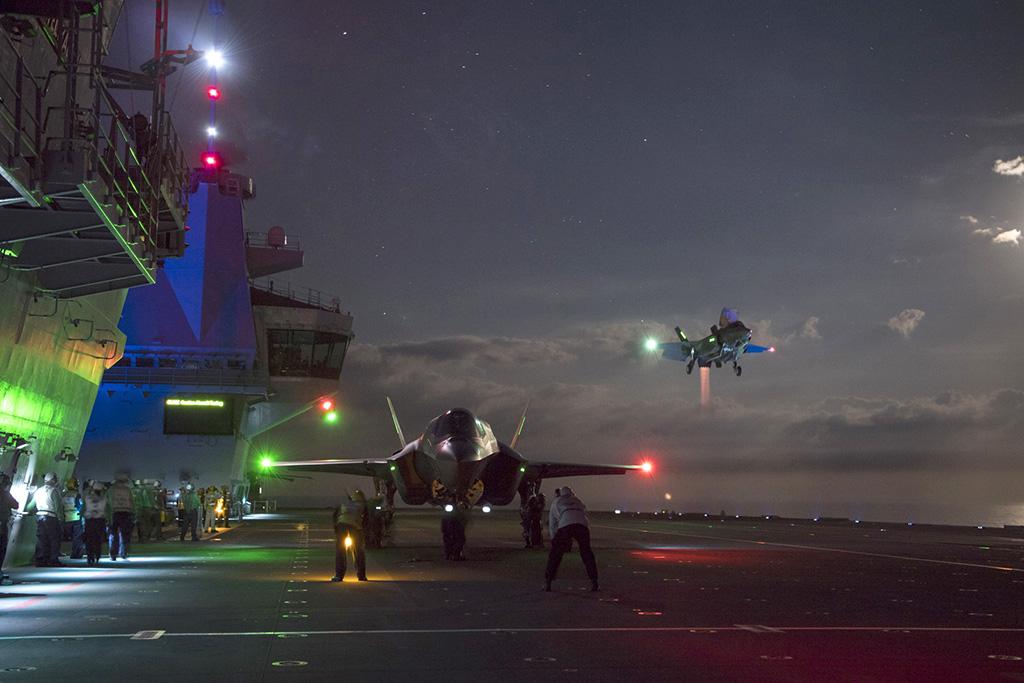 The Queen Elizabeth uses low-intensity light-emitting diode lighting systems to enable safe flight-deck operations for deck personnel and to reduce the glare for pilot night-vision systems. Also of note is the glow of the engine from the landing aircraft, which can be confused as reheat. The F-35 does not use reheat for landing; the effect is likely caused by a long camera exposure. A similar effect can be seen in night-vision camera imagery of F-35Bs landing on U.S. flat-deck ships. 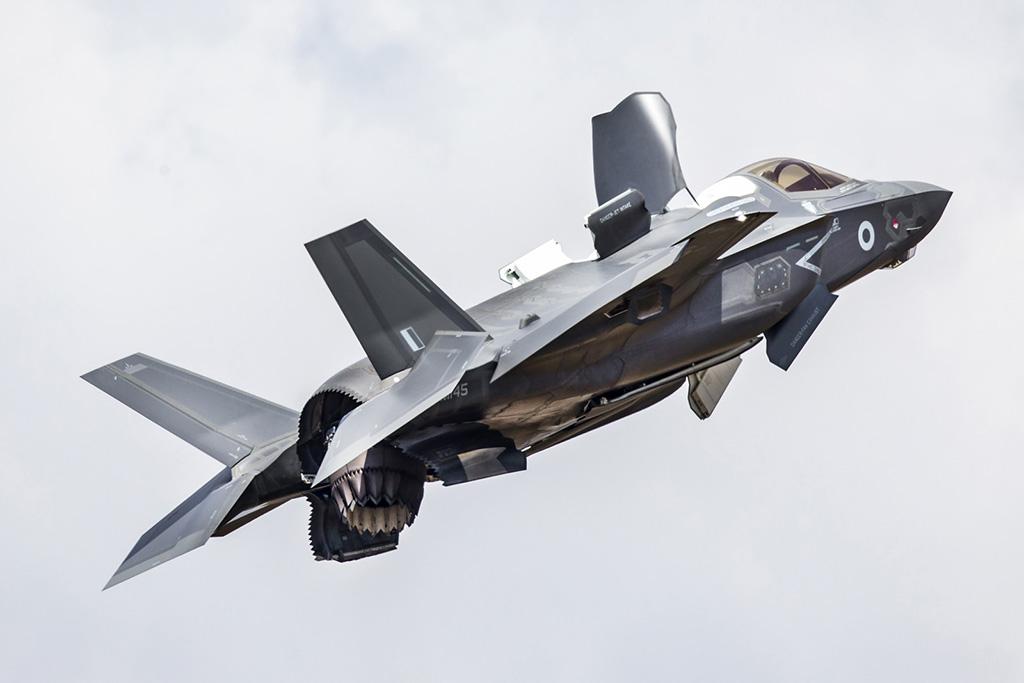 Britain has begun its long-awaited carrier trials, which will see the new 65,000-ton Queen Elizabeth-class ship operating with the Lockheed Martin F-35B Lightning II aircraft for the first time. The carrier is currently performing the trials off the Eastern Seaboard of the U.S. with aircraft from U.S. Naval Air Systems Command and flown by test pilots from the Royal Navy, Royal Air Force, U.S. Marine Corps and industry partner BAE Systems. More than 500 takeoffs and landings are planned over the next 11 weeks, while a third trial period is planned for 2019.