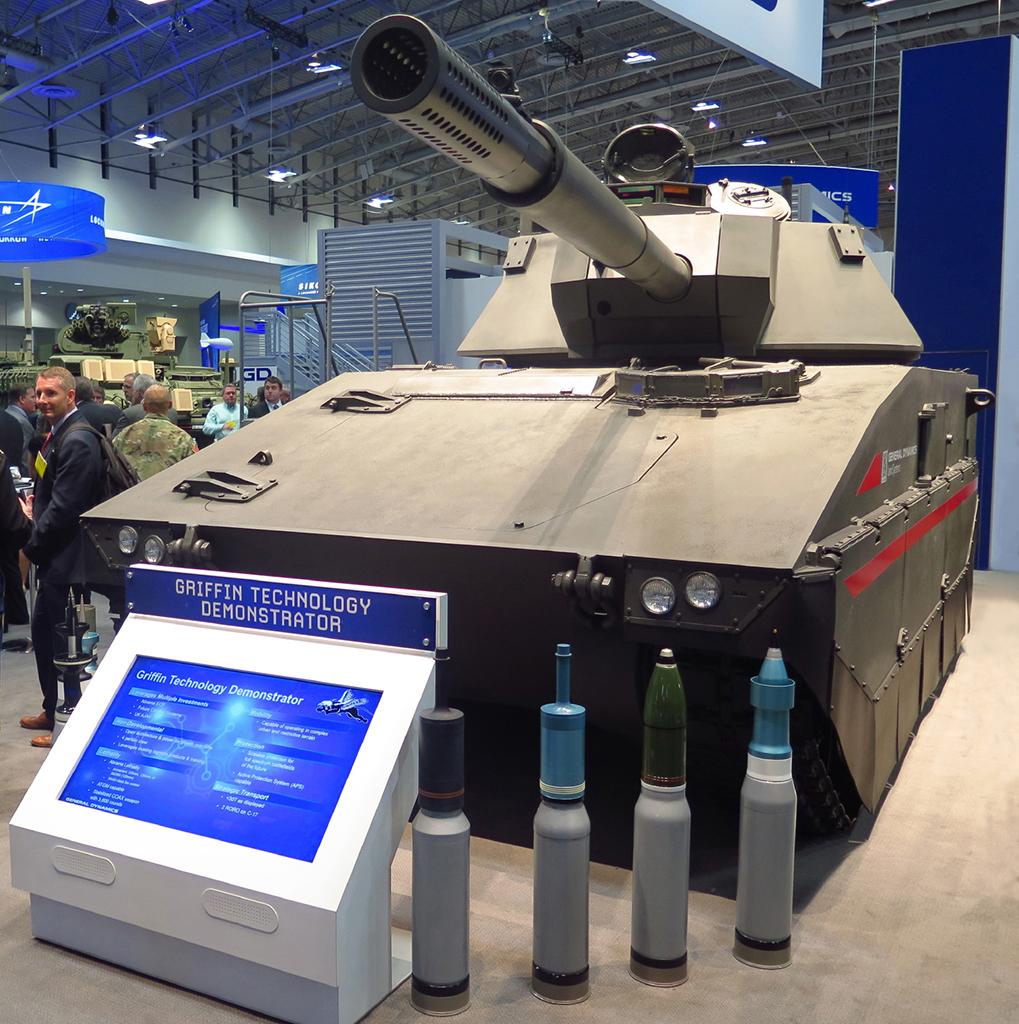 The Army’s Joint Multi-Role Technology Demonstrator (JMR-TD) and Future Vertical Lift (FVL) programs are looming large here. A material development decision for FVL by the Pentagon is expected soon, which will trigger an analysis of alternatives for the first of what will become a next-generation family of military rotorcraft to replace legacy types.

In addition to the V-280 for JMR-TD, the Sikorsky S-97 Raider is featured at the show, as are subscale models of the Sikorsky-Boeing SB-1 Defiant and Karem Aircraft’s Optimum-Speed Tiltrotor series.

GE Aviation and the Honeywell-Pratt & Whitney Advanced Turbine Engine Company (ATEC) are also drawing attention, as the competition between their respective GE3000 and HPW3000 powerplants for Improved Turbine Engine Program heats up.

GE announced at the show that it has conducted its first full engine test of the single-spool Future Affordable Turbine Engine, while ATEC has announced a development and demonstration contract related to FVL.

Other attractions include runway-independent UAVs as well as loitering munitions that fly above the battlespace and pick out targets of opportunity to destroy. 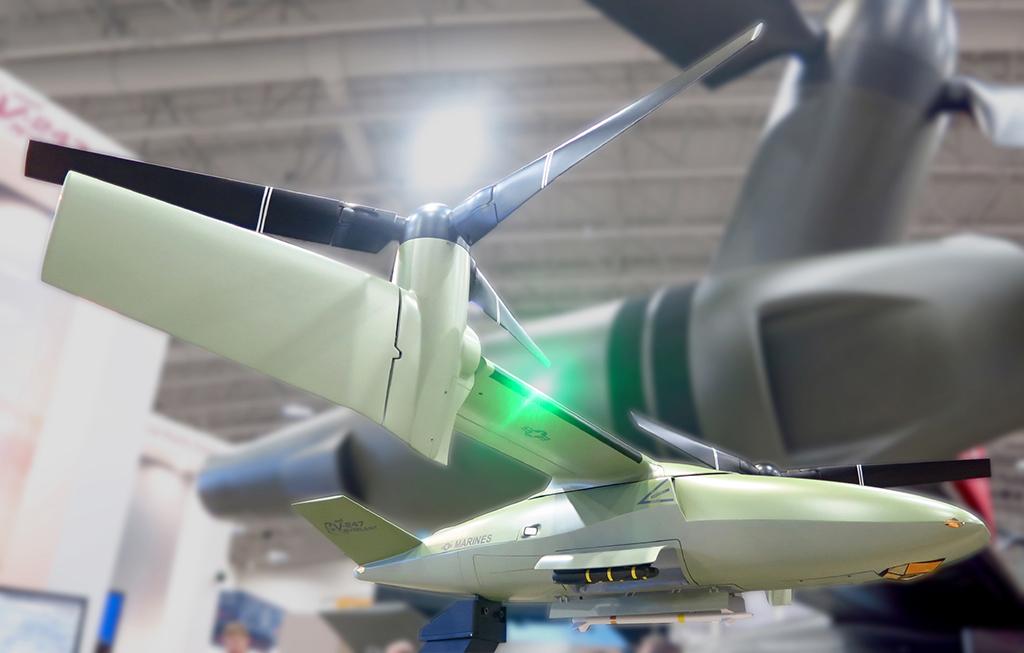 Textron Systems and L-3 are duking it out on the hybrid vertical-takeoff-and-landing (VTOL) UAV market—each eyeing an Army requirement for a “runway-independent” drone capable of lifting off from unprepared fields while still maintaining the aerodynamic efficiency of a fixed-wing aircraft. Textron revealed its offering, a beefed-up hybrid fixed-wing, quadcopter "Aeosonde HQ" Small UAS, earlier this year, claiming an endurance of 8 hr. with a 10-lb payload and airspeed of 45-60 kt. at an altitude of 10,000 ft, powered by the Lycoming EL-005 heavy-fuel engine. It would provide day-and-night imaging, communications relay and signals intelligence independent of a runway. The Aerosonde hybrid was on display for the first time at Textron's booth, although images of company-backed flight trials were released earlier this year. L-3 surprised observers at a recent Air Force Association conference in Washington in September when it revealed a similar-looking yet distinctly different hybrid quadcopter, aimed squarely at the Army requirement in competition with the Aerosonde. The company won’t give away any details about its drone, except the name: Fixed-Wing VTOL Rotorcraft, or FVR. An official product launch or announcement about FVR is expected within weeks.

The Army’s hunt for high-tech, low-cost Lethal Miniature Aerial Missile System (LMAMS) continues to be reflected in the exhibit halls of AUSA. Based on small UAS technology, these “loitering munitions” are designed to hunt for targets of opportunity to swoop in and destroy. Looking through the lens of an infrared camera mounted on the device’s nose, soldiers can attack a variety of targets, such as hidden snipers or soft ground vehicles, without putting themselves in harm’s way. AeroVironment made a splash at the opening of AUSA, announcing a $22.8 million, one-year contract for its Block 10C Switchblade LMAMS services as an urgent operational need via the Army’s Close Combat Weapons Systems Project Office. The Block 10C variant was revealed in May.

As an early adopter of loitering munitions, Israeli technology features prominently in this contest and at AUSA. Raytheon Missile Systems has partnered with UAV Vision to offer the pneumatic tube-launched 12-lb. Hero 30, UAV Vision‘s lightest offering. It is capable of speeds of up to 100 kt. with 30 min. of endurance, and its angle of attack ranges from vertical to a 20-deg. slant, officials says. Israel Aerospace Industries also debuted its newest offering—a fearsome-looking attack quadcopter called Rotem L. With an advertised range of 6 mi. (10 km) and endurance of 30-45 min., the small quadcopter optionally carries a 1-kg (2.2-lb.) warhead and can return to its operator for reuse if no targets are prosecuted. 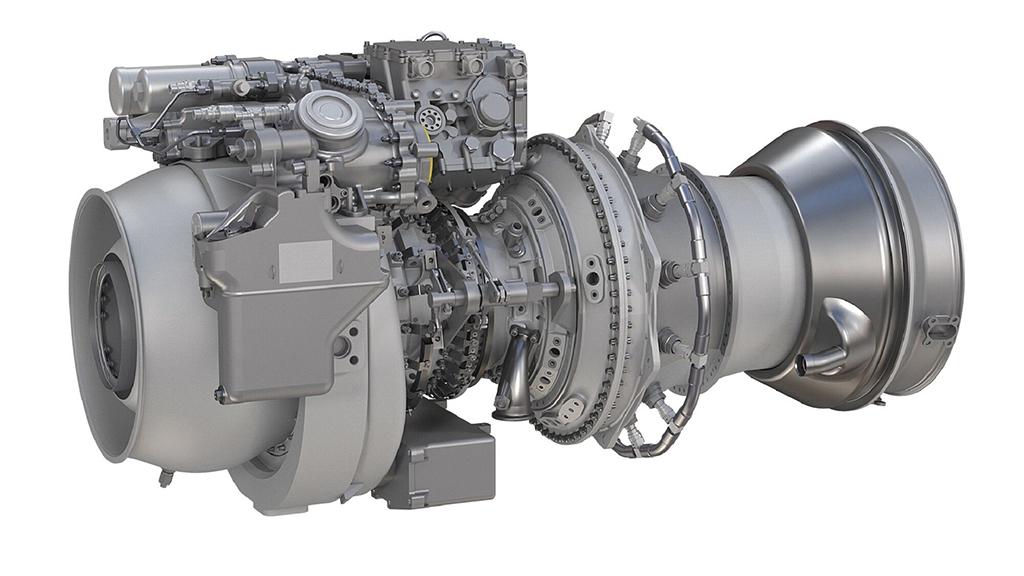 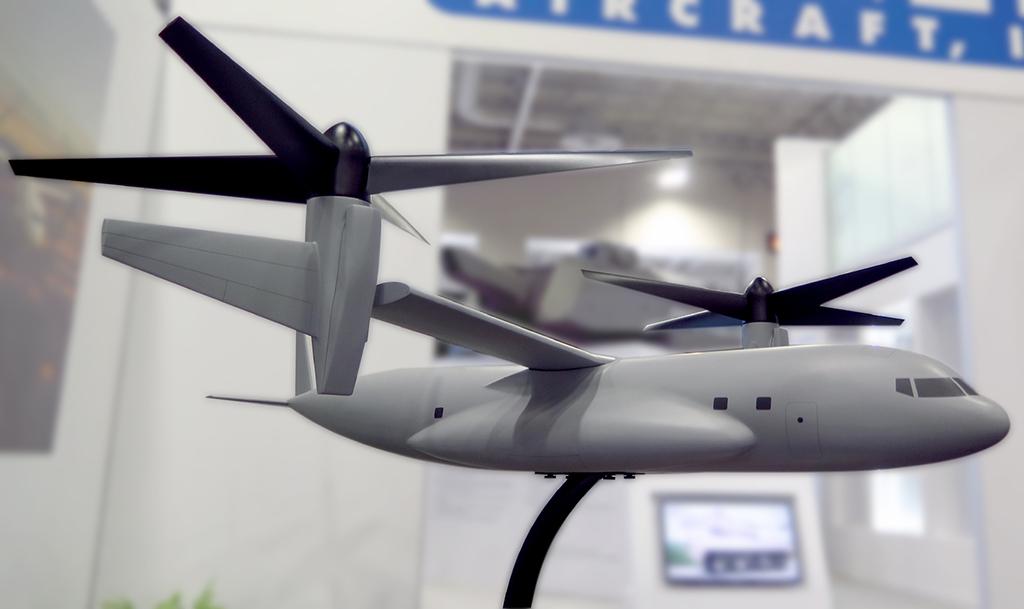 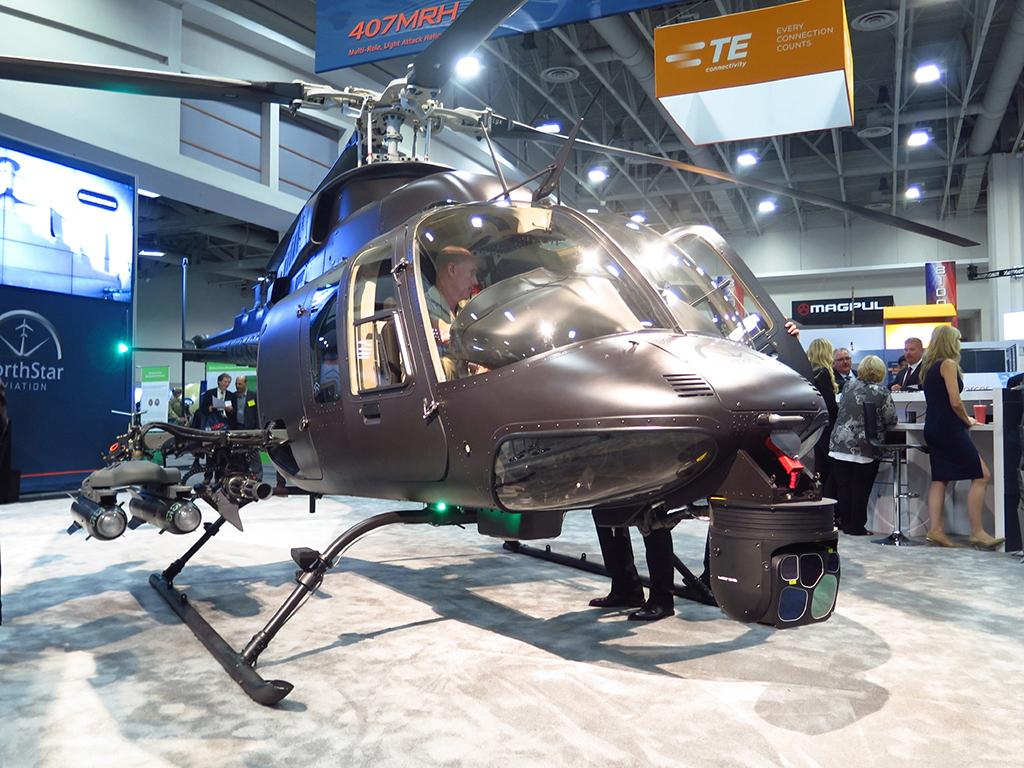 On any given day around the world, a Bell 407GX commercial helicopter is likely shuttling corporate bosses, electricity-grid inspectors or emergency responders. In conflict zones, however, the helicopters are being used to attack insurgents, destroy tanks with Hellfire missiles and provide armed reconnaissance to support ground troops. It is in those missions that NorthStar Aviation says its militarized 407GX Multirole Light Attack Helicopter (MRH) excels, and it wants the U.S. Army, Special Operations Forces and potential foreign buyers to consider it. The company says it has delivered “at least 25” of a 30-aircraft order to the United Arab Emirates(UAE), its 407MRH launch customer, on top of the 15 unarmed Bell 407s it sent to Dubai to support flight training. The company brought its display model along to AUSA, outfitted with standard armaments on a four-station Cantine weapons platform: twin AGM-114 Hellfire anti-tank missiles, a seven-shot M260 rocket pod for firing 2.75-in. Hydra rockets and two gun options—the 0.30-caliber M134 minigun (3,000 rounds) and 0.50-caliber GAU-19 heavy machine gun (500 rounds). Added features include Garmin G1000H avionics, a fully integrated mission and weapons management systems and a Flir 260HLD electro-optical/infrared turret as well as lightweight carbon-fiber doors and a driveshaft cover with antenna mounts. NorthStar competes for orders directly with prime manufacturers such as Bell—which supplied Iraq’s IA-407 armed scout aircraft. NorthStar says the 407MRH costs up to four times less than a traditional gunship and asserts that it can convert new and existing rotorcraft more quickly and cheaply than OEMs while maintaining the fully airworthiness and warranty of the platforms. It is in discussions with many interested parties, but firm orders remain elusive.

The Association of the U.S. Army’s (AUSA) exposition kicked off in Washington on Oct. 3, luring battle tank and sniper rifle fans by the thousands from across the city, country and Pentagon. For those who fight from the air or fly troops into combat, the show still had plenty to satisfy.