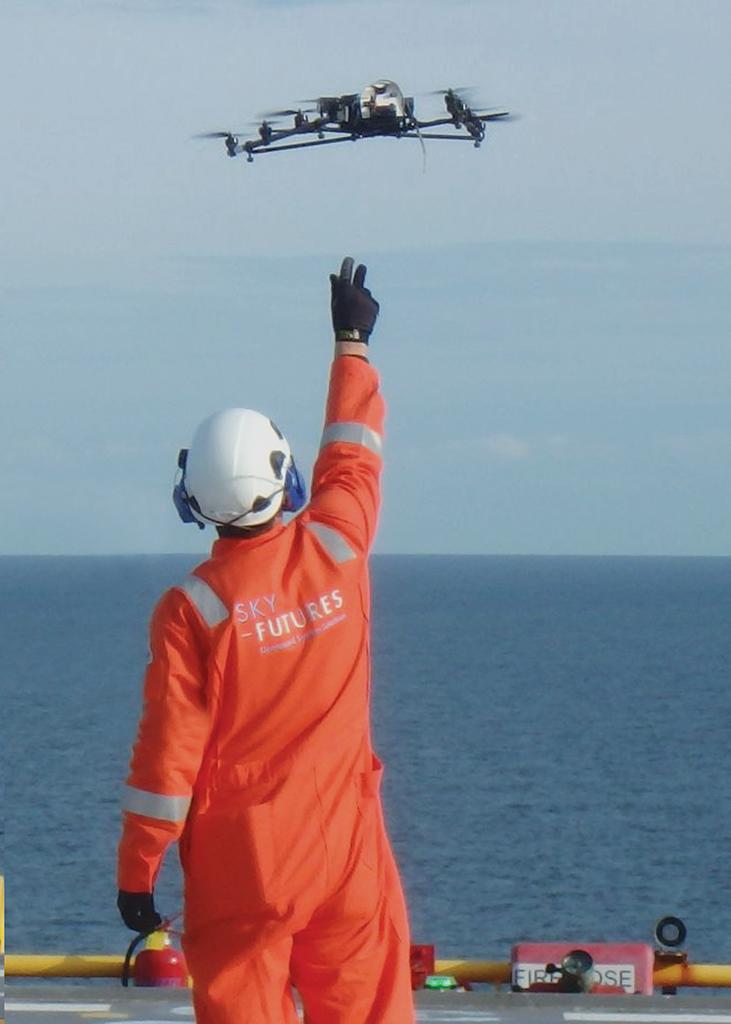 Infrastructure inspection has emerged as one of the compelling applications for commercial unmanned aircraft, offering a safer and less-expensive alternative to manual examination of industrial facilities.

Getting a head start

Founded in 2009, the UK’s Sky-Futures was an early entrant into the market to use drones to inspect vertical infrastructure, such as flare stacks on oil rigs, that can be hazardous for human crews. The company now serves markets including oil and gas, renewable energy, power utilities, telecommunications and bridge inspection.

Sky-Futures has expanded into training, with drone academies in the UK and U.S. (it opened an office in Houston), and into new services, including internal tank-inspecting on oil tankers. In 2016, major offshore helicopter operator Bristol Group invested in Sky-Futures. 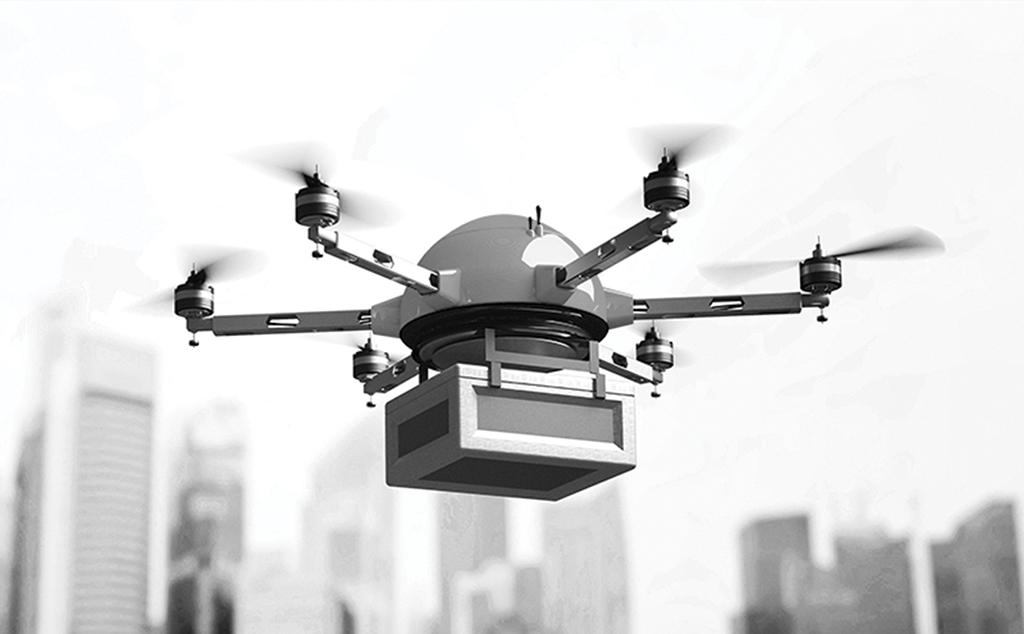 Where conventional radars scan a narrow beam across the sky, mechanically or electronically, Aveillant’s holographic radar illuminates an entire volume and forms multiple simultaneous receive beams. By dwelling rather than scanning, the radar can detect small targets and extract additional detail to enhance discrimination and minimize false alarms.

Developed as a gap-filler to solve the problem of wind turbines interfering with air traffic control radars, Aveillant’s radar has found an application in countering the threat from drones. With no moving parts, the Gamekeeper holographic radar can detect, track and classify every target within a 3D volume out to 5 km (3.1 mi.).

UK-based Aveillant was formed in 2011 as a spinoff from Cambridge Consultants, a product development consultancy in Cambridge, England, and Boston. Gamekeeper radars have been sold to Monaco, Singapore and French air navigation service provider DSNA for airport counterdrone pilot projects. 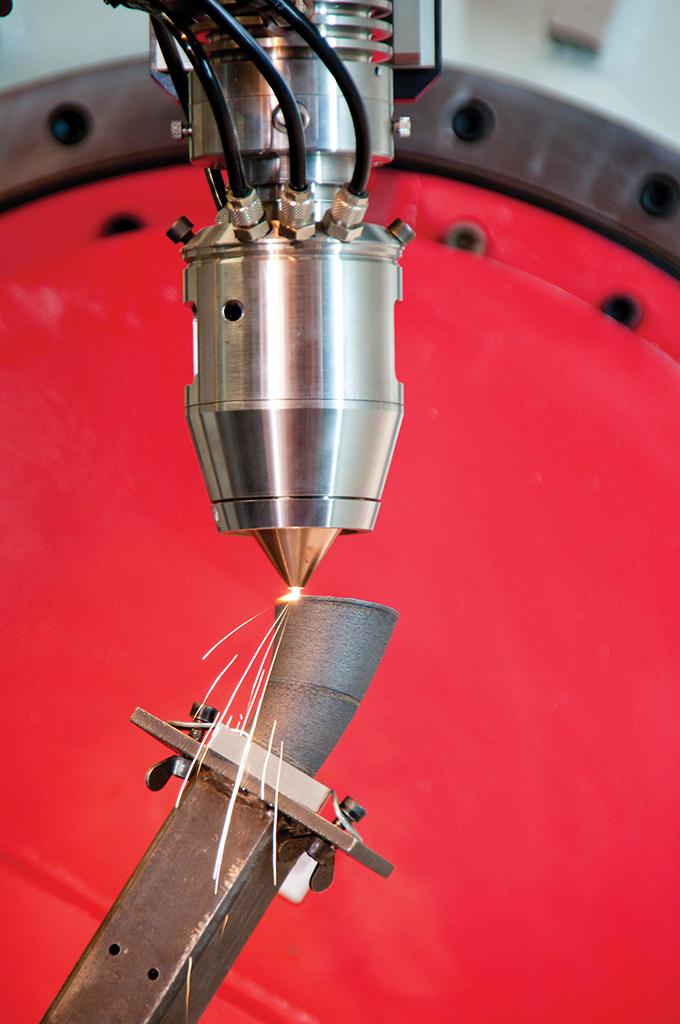 3D printing, one step beyond

Additive repair
Rather than being replaced, a damaged part may be repaired. This is what France-based BeAM is offering with its direct energy deposition (DED) technology.

Welding carries so much energy that it can change the structure of a part, the company says, but DED uses “just enough energy to melt the metal powder.” The first repair of a flyable turbine blade using DED may take place this year.

This use of additive manufacturing may initiate a paradigm shift in the maintenance business. Spare parts from OEMs—especially engine makers—are usually expensive, to offset the sale of original equipment at rock-bottom prices. 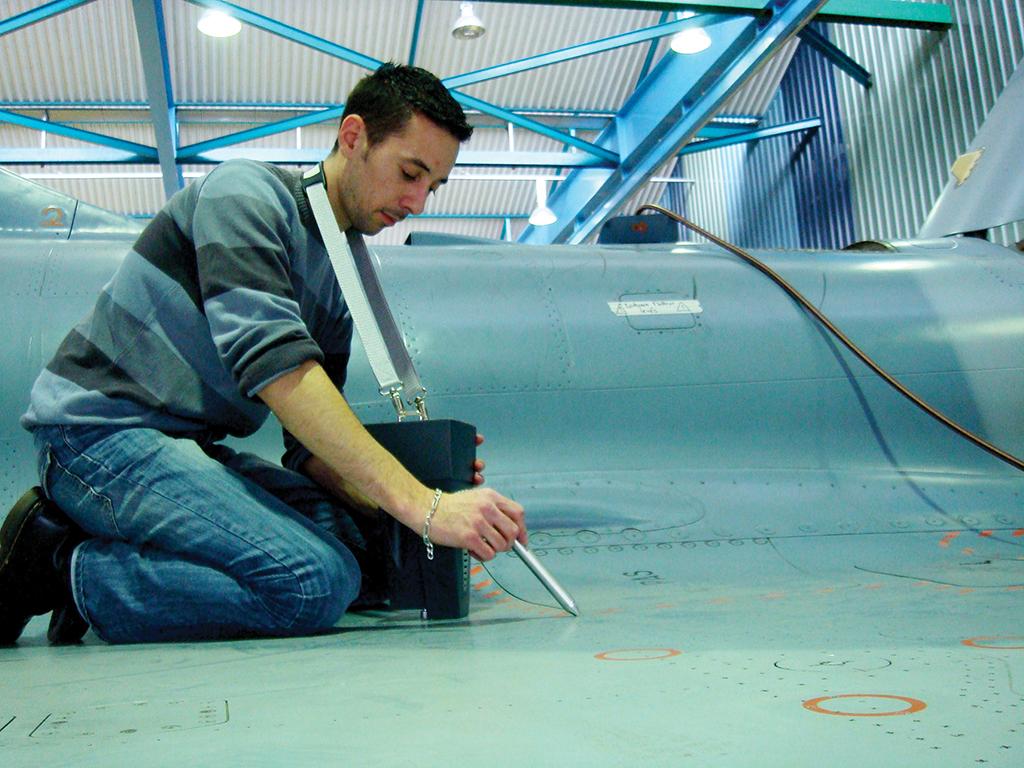 Helium use
Sunaero can guarantee fast location and repair of a fuel leak. In an aircraft-on-ground situation, Sunaero uses helium to detect the origin of the leak and during the final leak-proof pressurization check. In the meantime, long-wave infrared curing will have accelerated the process to 1 hr. from 6-10 hr.

Versatile technique
The same know-how can be applied to other sealant polymerization needs such as a windshield replacement or cabin paint touchup.

Branching out
Sunaero is now morphing into a civil and military service provider from an equipment supplier. It already has its base in France as well as outposts in the U.S. and Malaysia. Over the next three years, Sunaero is planning to set up about 10 facilities at major airport hubs.

An industrial approach to smallsats

Cubesats were conceived to provide researchers with a low-cost way of testing satellite technologies in orbit. They have become the core of a new space industry, with companies launching fleets of smallsats into low-Earth orbit for remote sensing.

Founded in 2005 by Craig Clark, Glasgow-based Clyde Space has focused on bringing down the cost of space by producing large numbers of standardized small, nano- and cubesats and subsystems. Clyde produced Scotland’s first satellite, UKube-1, launched in 2014, and is now a European leader producing an average of six spacecraft a month.

More than 85% of Clyde’s sales are outside of Europe, and in 2016 it opened a subsidiary in the U.S. In addition to satellites, the company supplies power systems, onboard computers, solar arrays, reaction wheels and attitude control systems. It is now developing its own ground station. 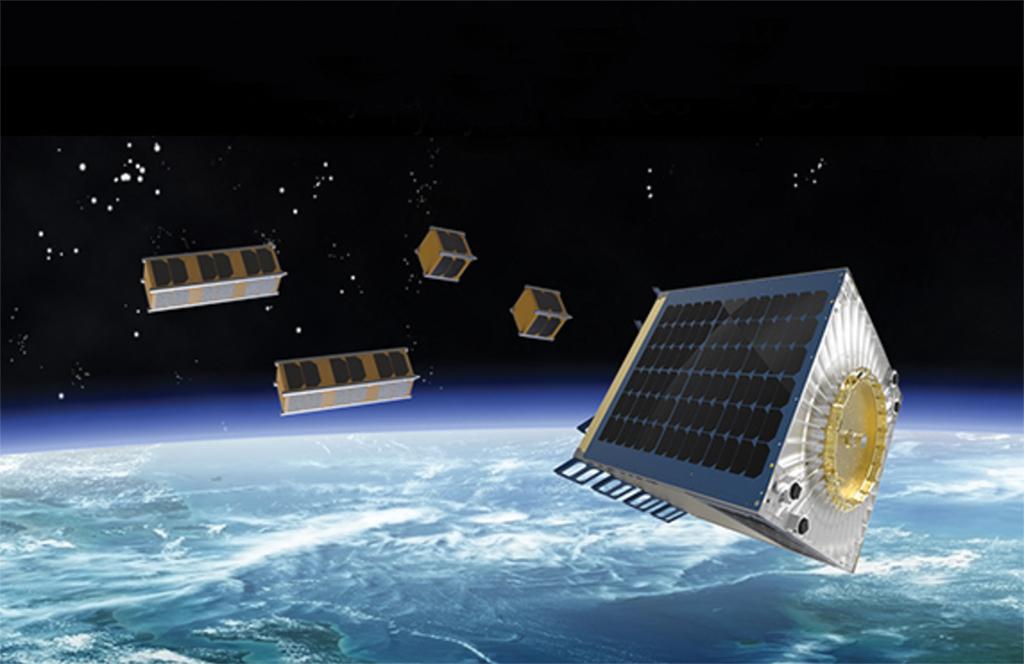 Projected growth in smallsat constellations is driving concern about the growing risk of collisions and debris in low Earth orbit, prompting responsible operators to plan to deorbit their spacecraft at the end of their operational lives or after a failure.

D-Orbit is an Italian startup developing technology for use in safely decommissioning cubesats and other small satellites. The company’s D-Sat technology demonstration mission is planned for launch in June on a SpaceX Falcon 9. D-Sat has a fully redundant architecture with no single position of failure and carries an independent motor, the D3, optimized to remove the satellite from orbit quickly, safely and directly.

Looking beyond LEO, D-Orbit is proposing the D3 motor to move medium-Earth and geostationary (GEO) satellites safely into graveyard orbits. Its D-Raise compact solid propulsion system is designed to accelerate the transfer of electric-powered satellites to GEO. And D-Orbit is offering the InOrbit Now service to precisely launch and deploy cubesats. 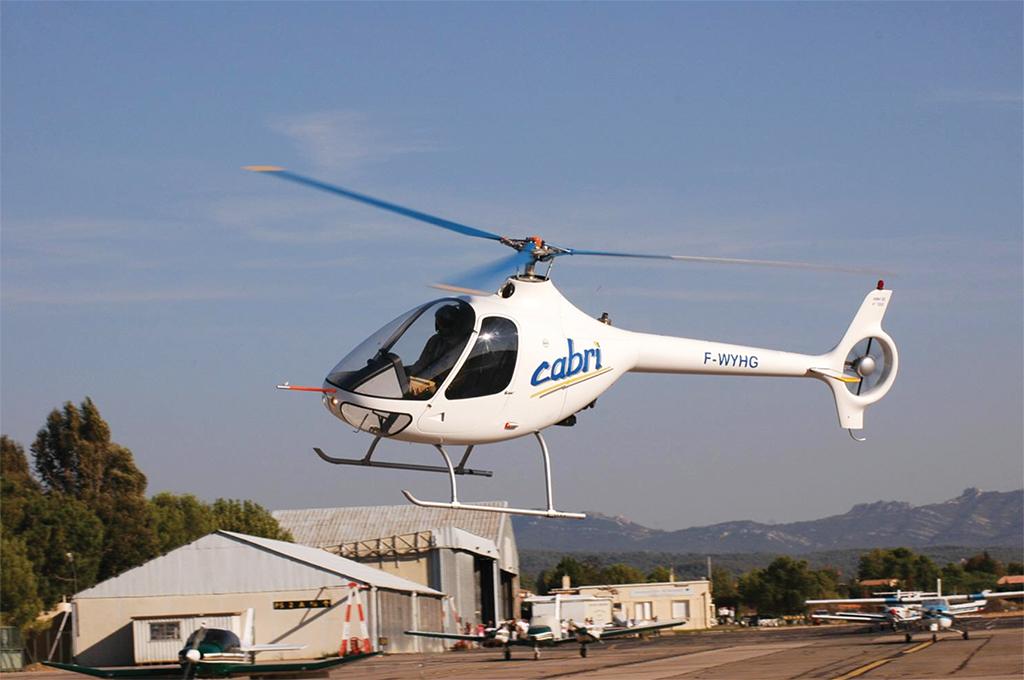 Light piston-powered helicopters have a key niche as cost-effective training machines. U.S. manufacturers have dominated the market, but France’s Helicopters Guimbal is making inroads with the Cabri G2.

The two-seat Cabri G2 was designed by former Eurocopter engineer Bruno Guimbal and incorporates features from larger turbine-powered helicopters, including a three-blade main rotor, fenestron tail rotor and conventional center cyclic sticks. Founded in 2000, Guimbal received European certification for the Cabri in 2007 and in 2015 entered the U.S. market with FAA approval.

Guimbal has struck its first major U.S. deal, with a leasing company serving the training market where the Cabri’s European-style clockwise-rotating rotor is seen as advantage when training pilots to fly Airbus Helicopters types. Airbus and French shipbuilder DCNS, meanwhile, are developing an unmanned helicopter, the VSR700, based on the Cabri. 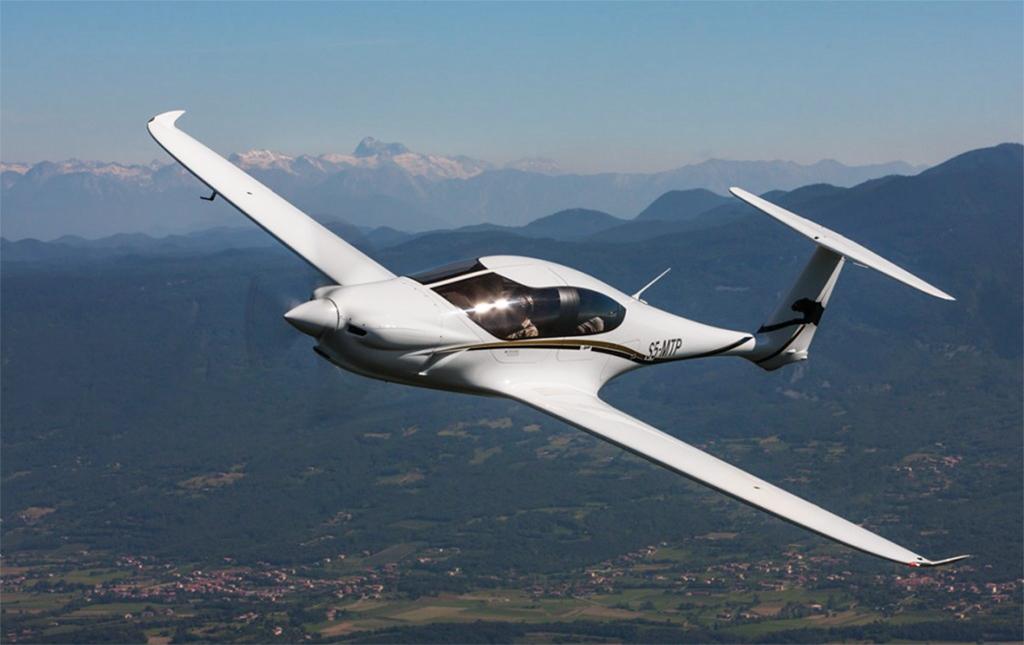 Slovenia’s Pipistrel has been in the light-aircraft manufacturing business for 30 years. It has seen dramatic growth in recent years, with expansion into China, India and Italy. Along the way, the company has become a leader in electric and hybrid-electric propulsion.

Ahead of the game

At its headquarters, Pipistrel produces one aircraft every two days from a lineup of 11 models. These include the first production electric-powered aircraft, the two-seat Taurus Electro motor glider and Alpha Electro trainer. Pipstrel also has a plant in Gorizia, Italy, where its electric aircraft and the four-seat Pantera will be built.

From hybrids to eVTOLs

Pipistrel has signed a €350 million ($392 million) deal with Beijing-based Sino GA Group to produce the Alpha Electro and a hybrid-electric version of the Pantera in China. The deal includes development of a 19-seat hybrid-electric aircraft that uses fuel cells. Pipistrel also is developing an electric vertical-takeoff-and-landing air taxi for ride-hailing giant Uber.

From bizav to commercial Vision Systems, a company that has so far placed its new-generation dimmable windows on a handful of business jets, may well take on a whole new dimension with its Acti-Vision window.

The in-development smart window will enable a passenger to interact, through an integrated touchscreen, with information and on-board services, the Lyon, France-based company says. As it designed the Acti-Vision window with business aviation in mind, it had first thought of including maps, news and meal orders. But the company also could generate revenue by displaying ads and thus become attractive for airlines.

In addition, as a dimmable window, Acti-Vision provides tint-tuning up to an instant 99.6% blockage of visible light.

Stemme, a name synonymous with highly aerodynamically efficient motor gliders, has become associated with long-endurance surveillance platforms. This led to the creation of a company focused on bringing that technology to airborne reconnaissance.

A tale of two Stemmes

Reiner Stemme founded glider maker Stemme AG in 1984. He designed the S10 and S12, with their retracting propellers. He also developed the S15, the basis of Sagem’s Patroller unmanned aircraft for the French Army and now built by Stemme subsidiary Ecarys. But in 2013, Stemme left to form a separate company to develop next-generation surveillance platforms.

Reiner Stemme Utility Air Systems’ first product is the RS10.E Elfin electric-powered motor glider, which draws on design of the S10. But the company also has flown the Q01, an optionally piloted aircraft designed for medium-altitude, long-endurance missions and developed jointly with the investment arm of the Qatar Armed Forces.

From 3D-printed repairs to windows that are touchscreens, counter-drone radars to electric aircraft, small European companies with innovative technologies and business models are making inroads into the aerospace market. As the global industry prepares to convene at the Paris Air Show, Aviation Week profiles some of these companies.

Thierry Dubois has specialized in aerospace journalism since 1997. An engineer in fluid dynamics from Toulouse-based Enseeiht, he covers the French commercial aviation, defense and space industries. His expertise extends to all things technology in Europe. Thierry is also the editor-in-chief of Aviation Week’s ShowNews.