Warbirds At Oshkosh – Not What They Seem 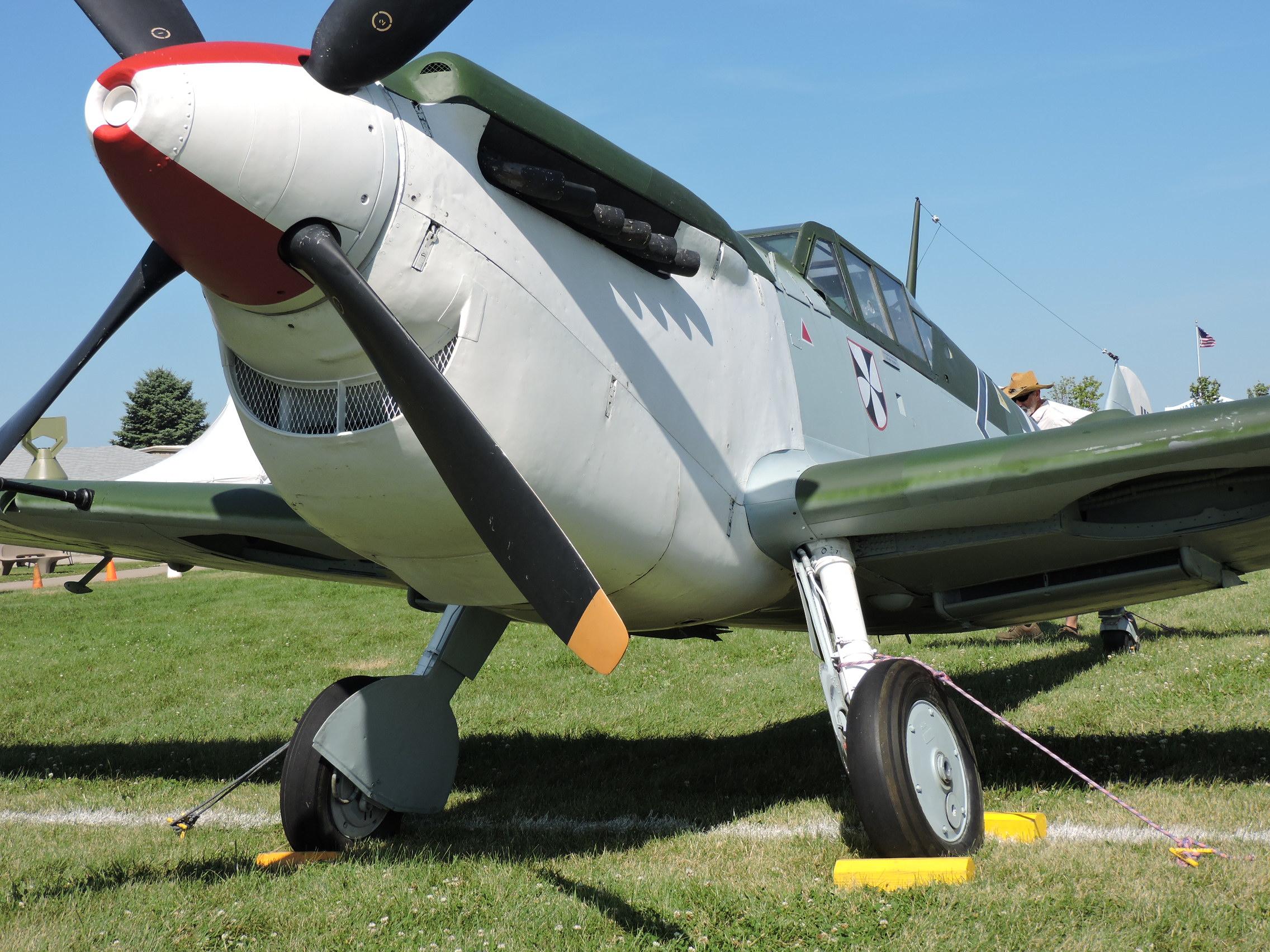 The Messerschmitt Bf109 on show in the warbirds area is not quite what it seems. It was in fact built in Spain under license as a Hispano HA-1112 version of the Me109G-2, but with a Rolls-Royce Merlin engine replacing the Daimler-Benz 605A. 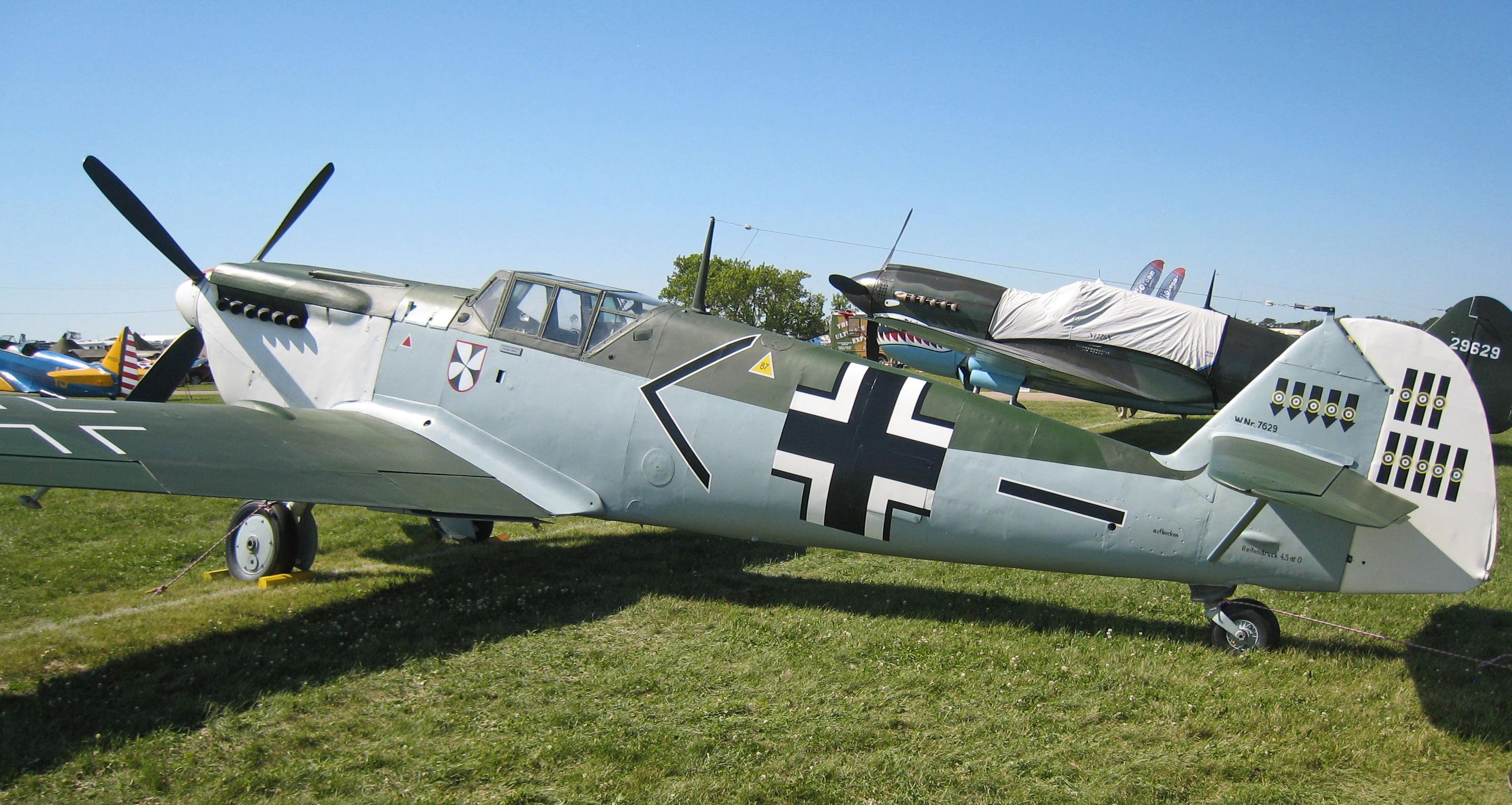 But more modifications were to come. The Hispano Buchon was one of those acquired from the Spanish Air Force to star in the movie Battle of Britain. False machine guns were added to the top deck to give it the aura of an Me109E, struts were added under the tailplanes, and false cannons to the leading edges of the wings. 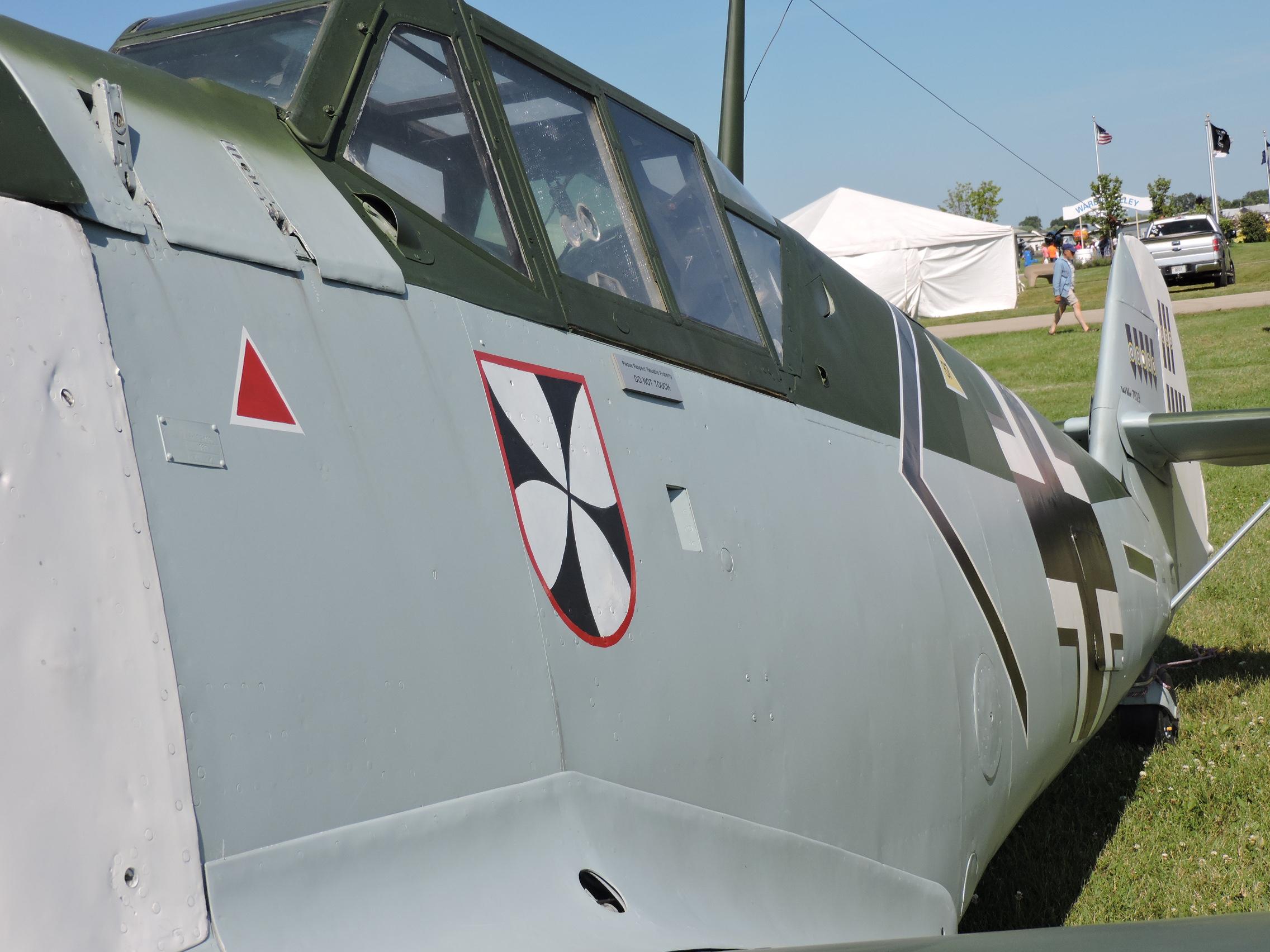 In this guise it was donated to the EAA Museum, and the Messerschmitt mongrel, although registered N109BF, has not flown for many, many years. It has a total flying time since new of only 92 hours, most of it wracked up filming the movie. 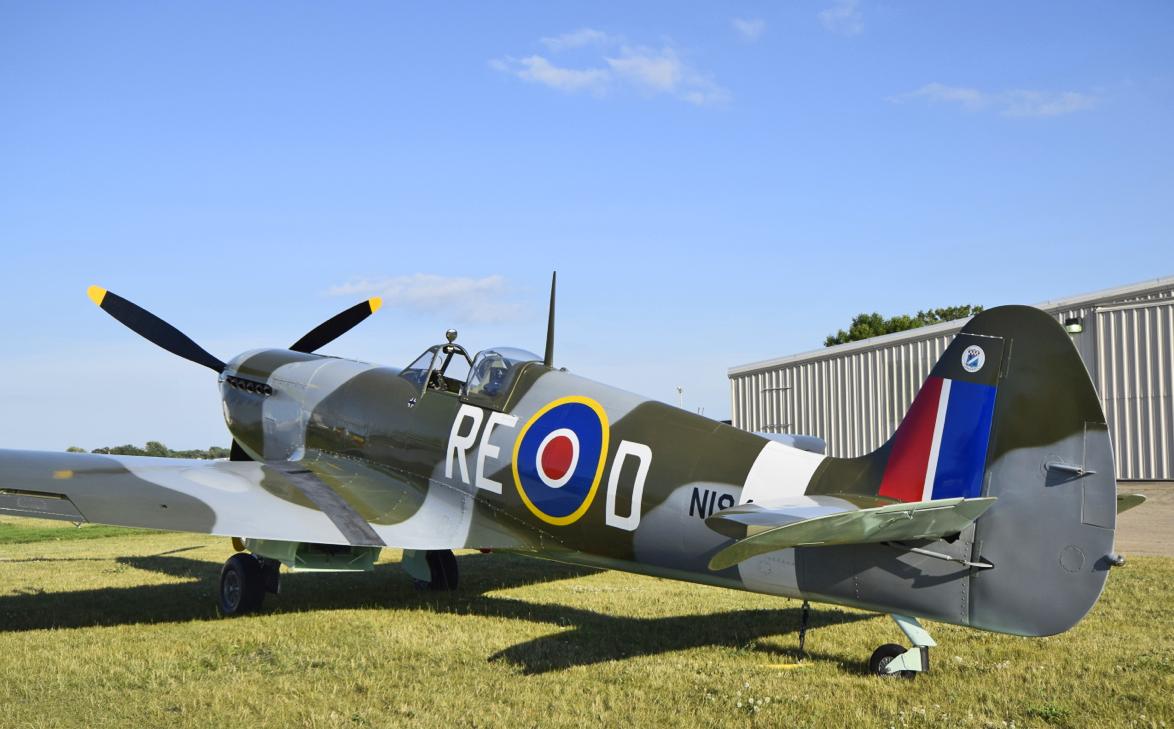 Retired airline pilot Bob Defford always wanted his own WWII Spitfire – but he never could afford one (a resurrected Mk1 that crashed on the Calais beaches in 1940 was auctioned just two weeks ago for nearly $5 million). So he decided to build his own. The culmination of his efforts, a beautiful full-sized replica of a Mk IX, is appearing here this year. It is almost indistinguishable from the real thing. 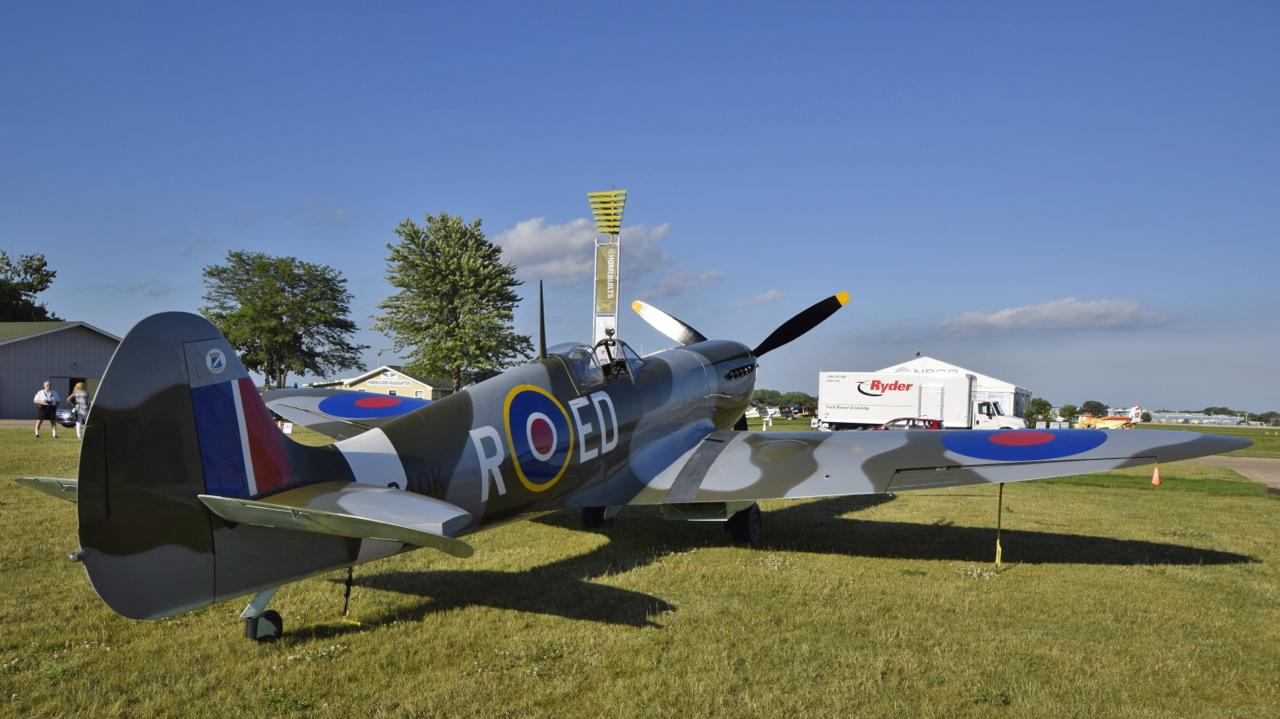 Defford’s all-wood Spitfire is based on plans by Frenchman Marcel Jurca, who designed the MJ100 to be adaptable to many marks of Spitfire. Work started in 1996, and the aircraft was completed seven years later. 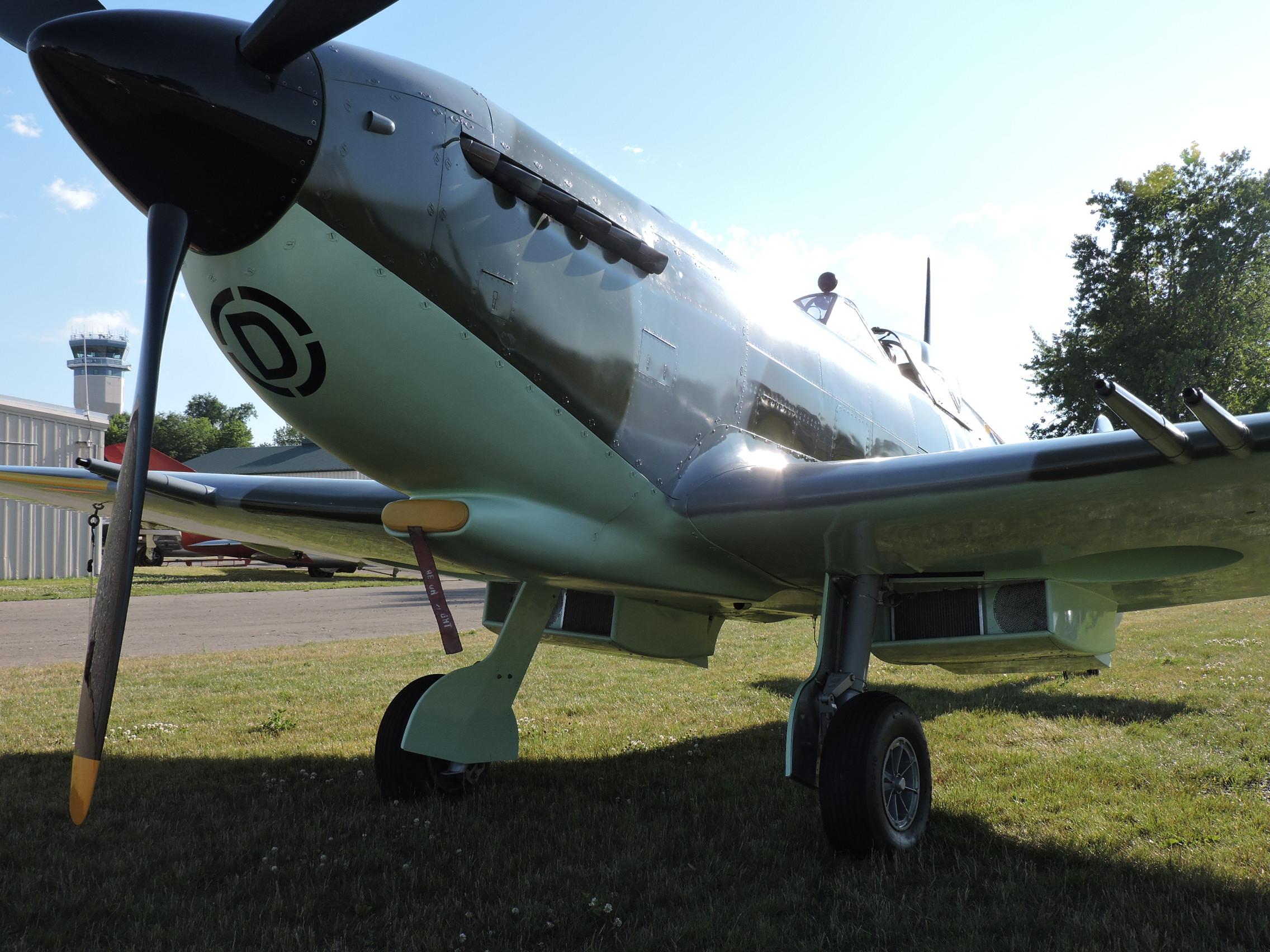 Performance is probably comparable to a real Spitfire, as Defford’s lighter-weight creation is powered by an Allison V-1710 engine driving a modified DC-3 propeller. 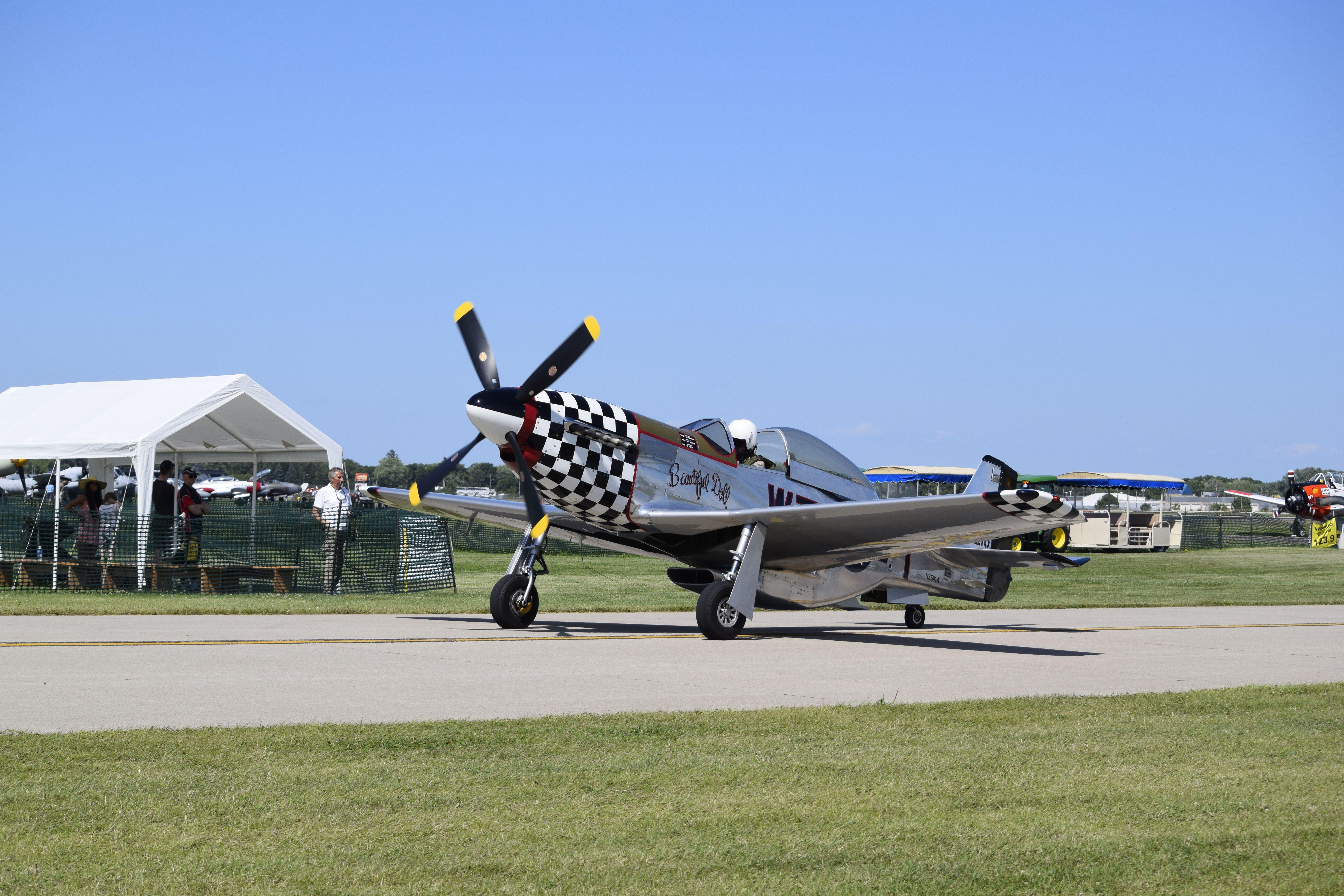 Scale replicas are becoming ever more realistic. Here, and in the next photo, a 70% scale S-51D Mustang Beautiful Doll provided as a kit by Stewart 51 taxies in through the Warbirds area. The two-seat aircraft is all-aluminum and can be fitted with 300 to 600 hp engines. 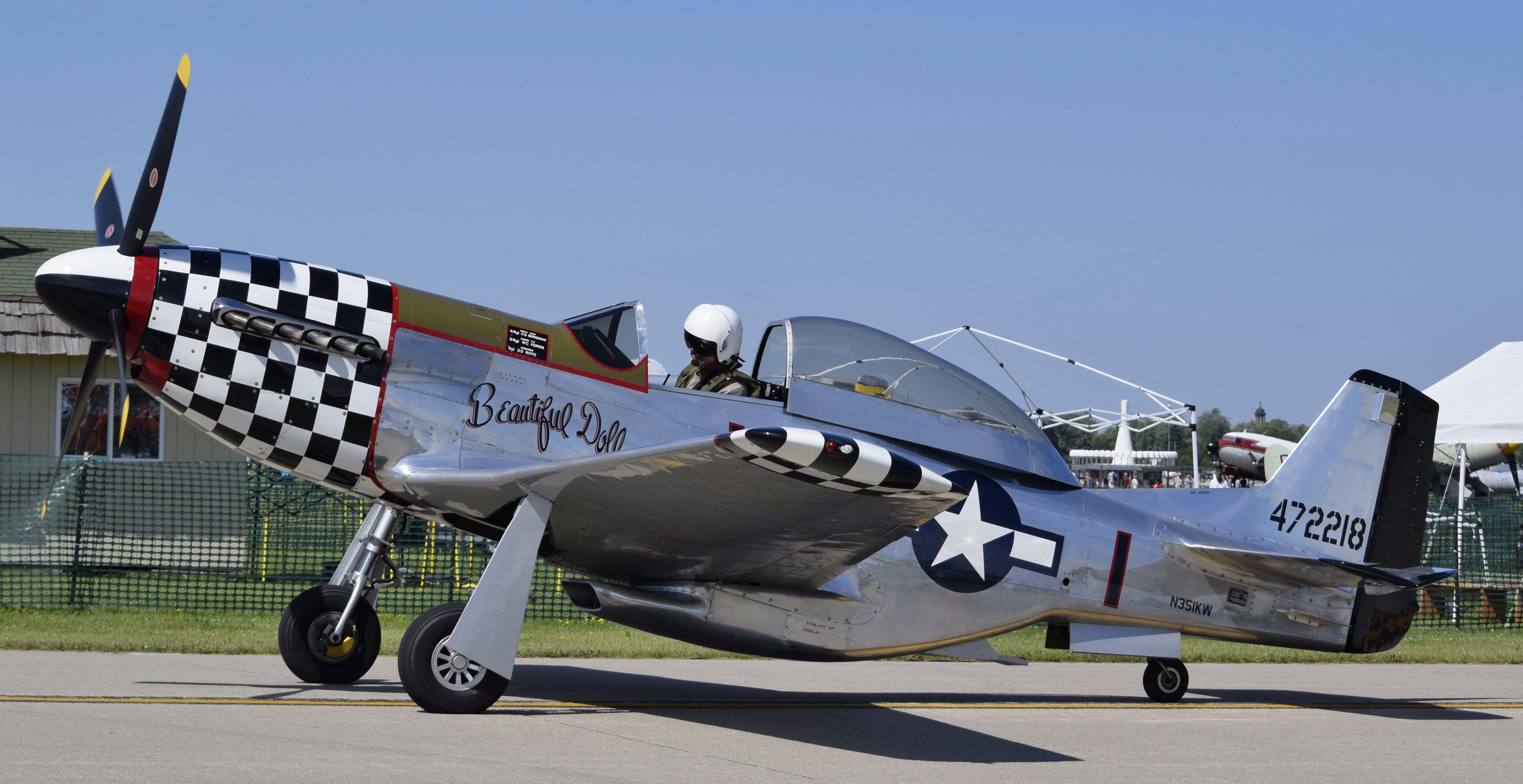 The Stewart S-51D is convincing enough from a distance, and is certainly much cheaper than the real thing.

Another Titan Aircraft T-51 Mustang taxies in, having arrived from Ohio.

Named “The Pisser,” it features nose art of a little boy taking a leak while his girlfriend looks on in horror.

<p class="p1"><span class="s1">Almost indistinguishable from the real thing,&nbsp;scale replicas are becoming ever more realistic. Here are some&nbsp;&lsquo;warbirds&rsquo; on display at Oshkosh.</span></p>