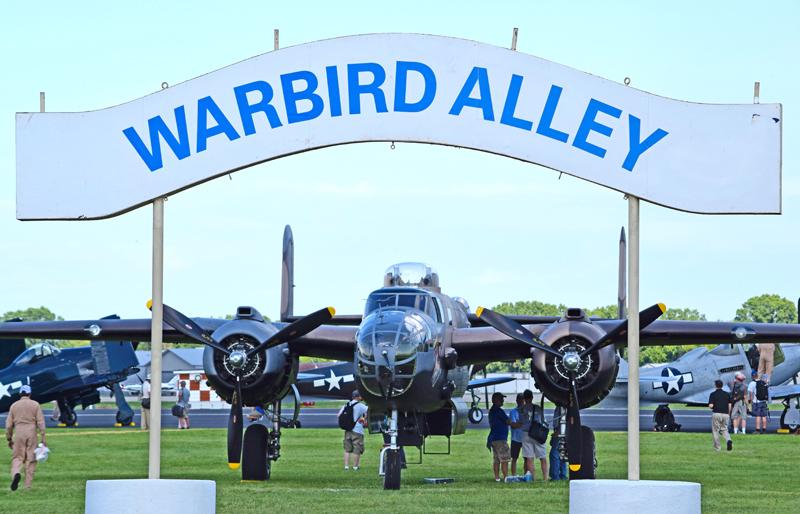 You would think you are walking into a military camp at the warbird end of Oshkosh’s Wittman Field. And there you will find more bombers and fighters, trainers and communications aircraft than operated by most air forces in the world. Here the entrance sign frames one of the more than a dozen B-25 Mitchells at this year’s show. 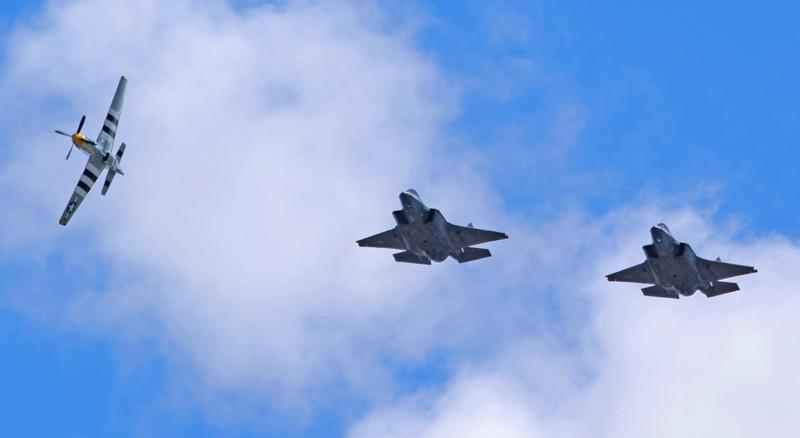 A pair of F-35 Lightning II fighters wowed the crowds in formation with a P-51 Mustang. 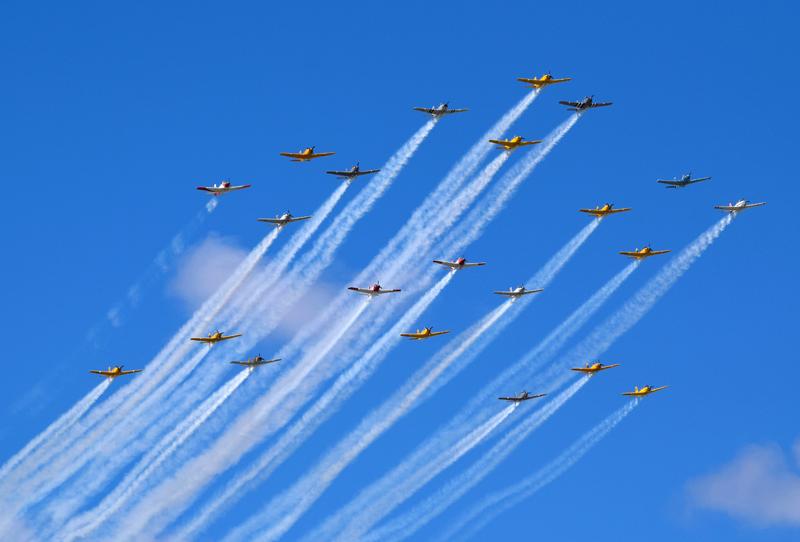 Can You Count Them?

Massed formations are the order of the day. Here’s a flight of T-34 trainers. And the sound of so many deep-throated engines roaring in unison is unforgettable. 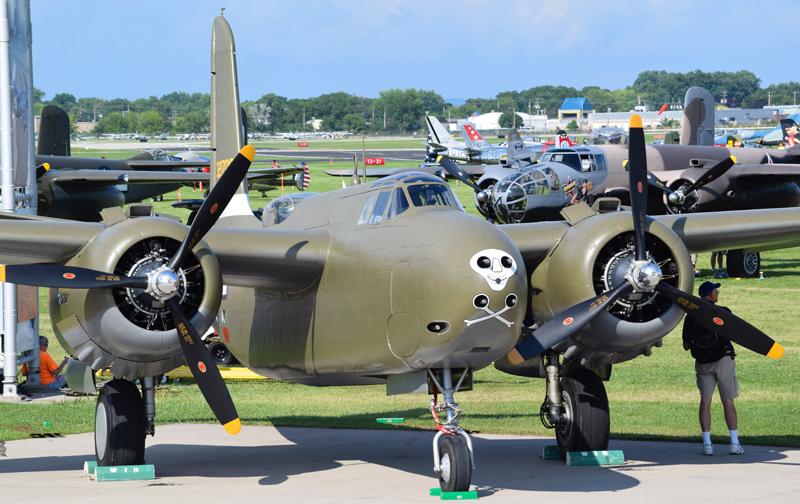 More than 7,000 Douglas A-20 Havocs were built in World War II and the only one flying is here at Oshkosh, thanks to Rod Lewis and his Lewis Air Legends collection based in San Antonio, Texas. Lewis Air Legends also owns the P38F Glacier Girl, as well as the famous Reno racer Rare Bear, a highly modified F8F2 Bearcat. This particular  Havoc was built in 1943 as an A20G, powered by two 1,700hp Wright R2600 engines. 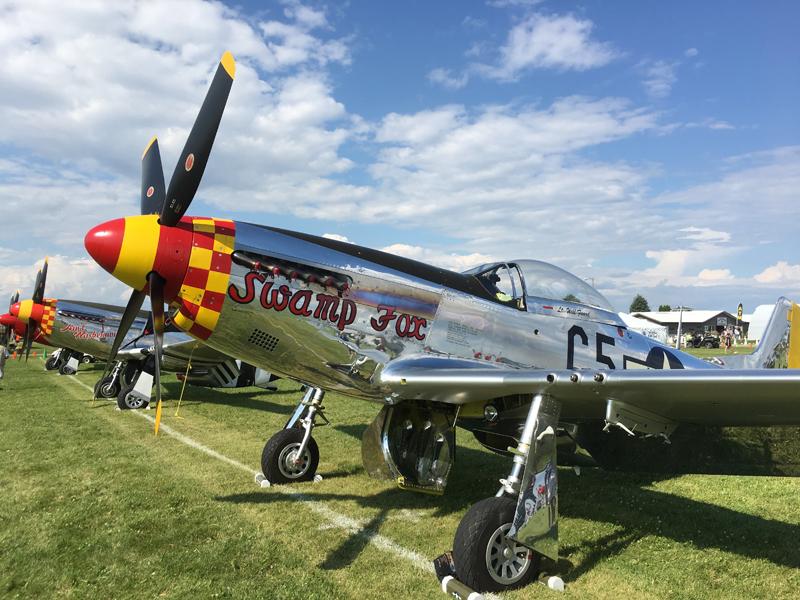 P-51D-25NA, s/n 44-74202 appears here painted as s/n 44-15660, ‘Swamp Fox,’ the last mount of then-Lt. Will Foard of the 364th Fighter Squadron, 357th Fighter Group, 8th Air Force, based out of Leiston, England. Robert Dickson Sr. and his son Robert bought the Mustang in June of 2012 after a five-year restoration managed by Jeff Harris at Allied Fighters in Chino, California with Mike Breshears of Vintage Airframes in Caldwell, Idaho, doing a majority of the work. 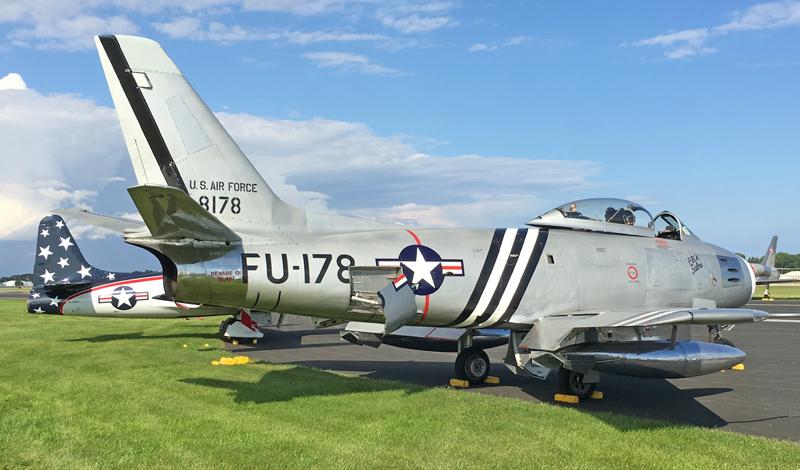 This F-86A Sabre is the world's oldest flyable jet. Built in 1948, serial number 48-178 spent 22 years flying around air shows in Europe before returning home to the U.S. in 2014. It is the 50th Sabre off the production line, and the only remaining airworthy F-86A. Legendary Air Force test pilot and air show performer Bob Hoover flew the aircraft on several occasions. 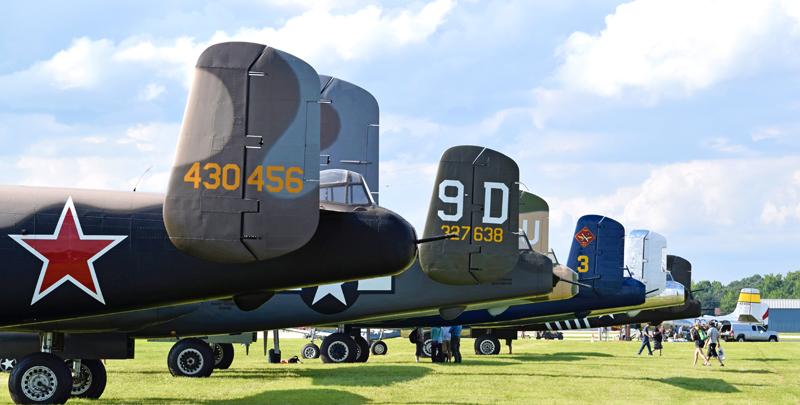 Birds of a Feather...

A line-up of some of the B-25 Mitchell bombers here for the 75th anniversary of the Doolittle Raid, in which B-25s were flown off an aircraft carrier to bomb Tokyo led by General Billy Mitchell.. The one in the foreground is unusual in that it wears Russian markings, representing one of the 900 B-25s that were supplied to that country under World War II’s Lend/Lease program. 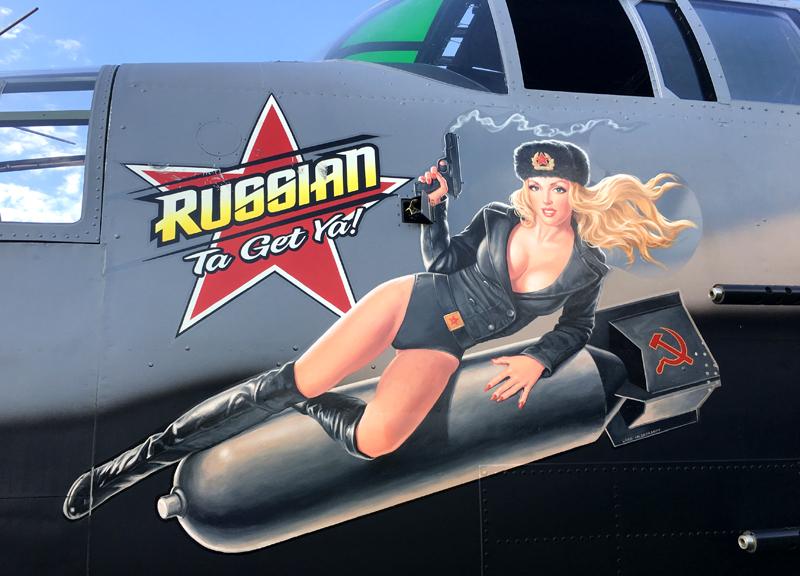 No, Its Not a Political Statement

The nose art on the Lewis Air Legends’ B-25 could almost be considered topical, but it harks back to the days when B-25s served in Russia. 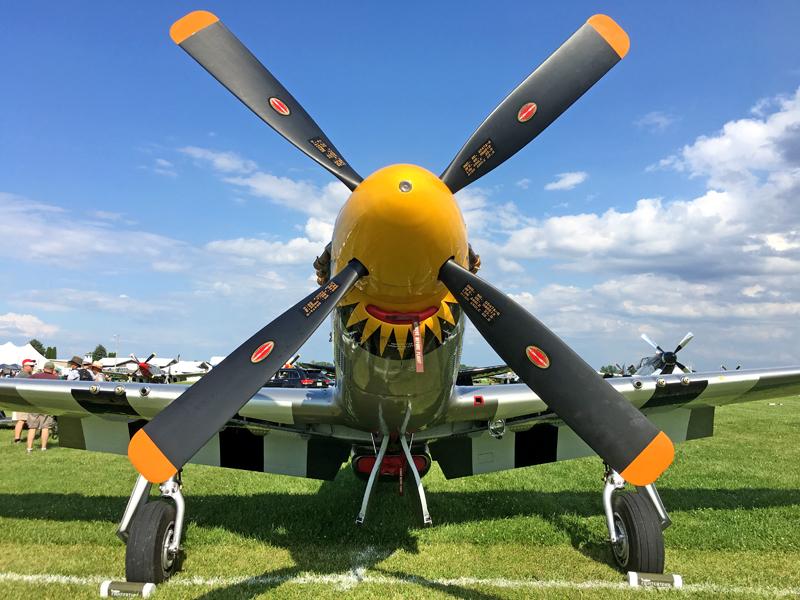 “Charlotte’s Chariot II” is painted in tribute to Cary Salter of the 354th Fighter Group. 9th Air Force, known as the “Pioneer Mustang Group” for having been the first fighter group to receive the P-51 for combat assignment. This particular aircraft was built in 1945. 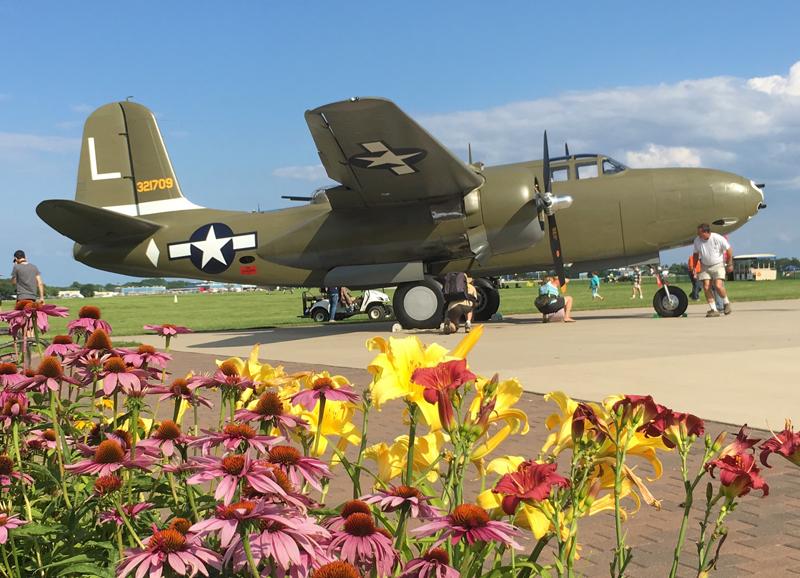 The world’s only flying Douglas A-20 Havoc in serener surroundings than its history would suggest. The aircraft was armed with seven machine guns, and could carry a bomb load of 4,000 lbs.

Hundreds of warbirds old and new flock to EAA AirVenture every year for the world’s largest extravaganza of ex-military aircraft, from bombers to fighters to trainers, from early Korean conflict jets to the U.S.’ very latest F-35 Lightning II.

This year marks the 70th anniversary of the formation of the 8th Air Force, and the 75th anniversary of the Doolittle Raid on Japan. One could call it Bomber Week: highlights include formations of the world’s only two flying B-29 Superfortresses, the venerable B-52, B-1 and B-2 bombers, massed flights of B-25 Mitchells to honor Doolittle, and the world’s only flying Douglas A-20 Havoc light bomber.

Two World War II P-47 Thunderbolts will fly with the USAF’s A-10 Thunderbolt II ground attack aircraft, and B-17s will be escorted by hordes of P-51 Mustangs.

Ever seen a Bell Cobra fighter, a rarity in the skies today? No? Well, there are four of them here, nearly the world’s entire flying population of them, comprising a newly-restored Bell P-39 AiraCobra and three of the later P-63 Kingcobras that had more success in post-war air racing than air combat.