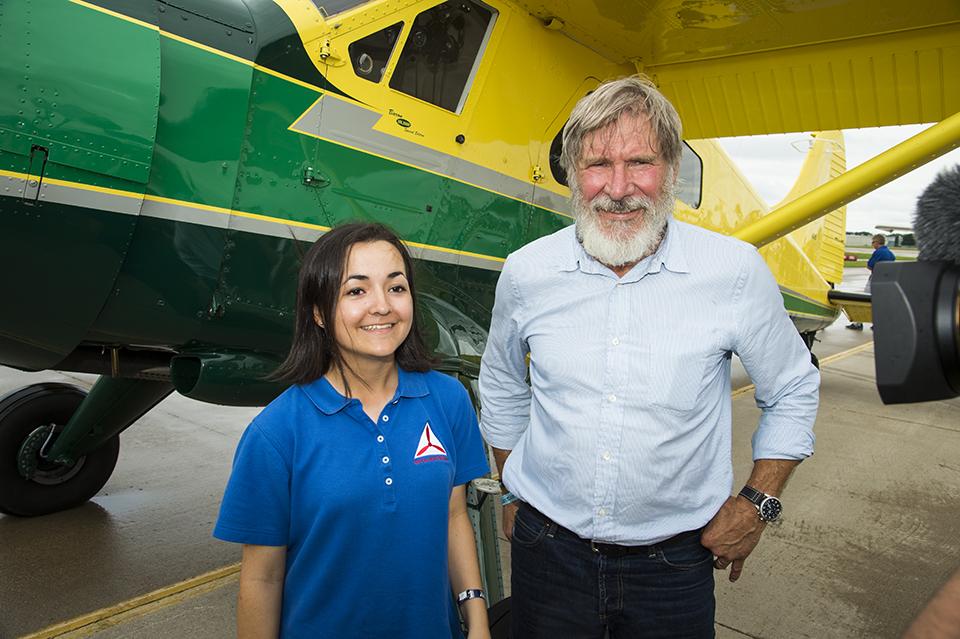 EAA celebrated the flight of the two-millionth Young Eagle here at Oshkosh, piloted by none other than movie star Harrison Ford. Jodie Gawthrop, of Westchester, Illinois, was the lucky girl, taken aloft on Thursday in a deHavilland Beaver by Ford, who was chairman of the Young Eagles program from 2004-2009. 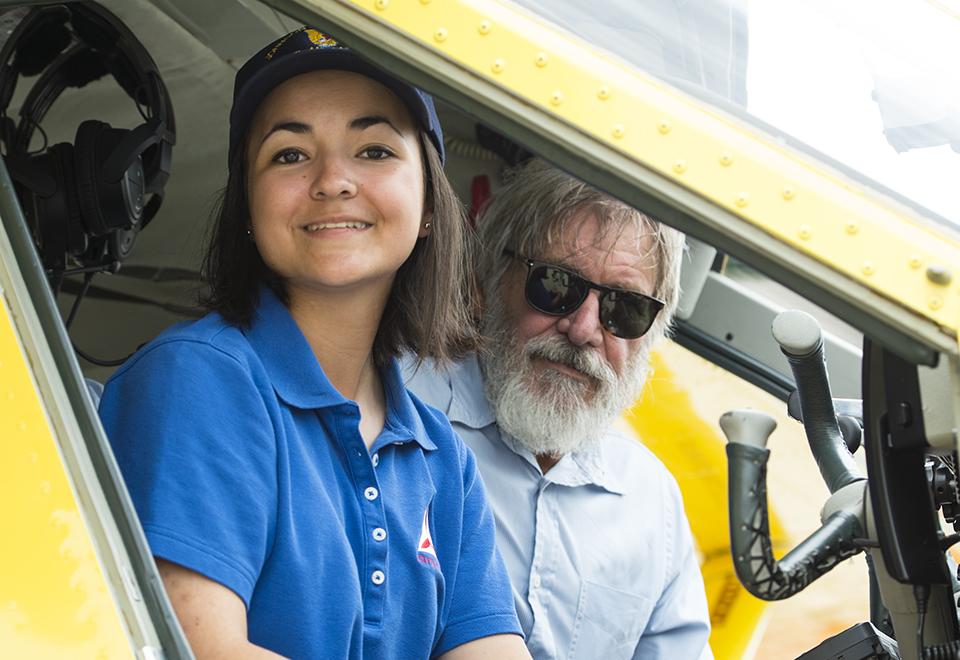 The Wonder of Flight

“It was amazing,” the 16-year-old said after her flight. “It was just wonderful.”

Gawthrop has been on-site this week, but the flight allowed her to see the convention from a different perspective. “You see aircraft after aircraft going by on the ground, but it’s not until you’re up there that you realize how big this event really is.” A junior in high school, Gawthrop first fell in love with flight through the Civil Air Patrol’s cadet orientation program in 2013. She has been working AirVenture with the CAP’s National Blue Beret this week, and is considering pursuing a military career. 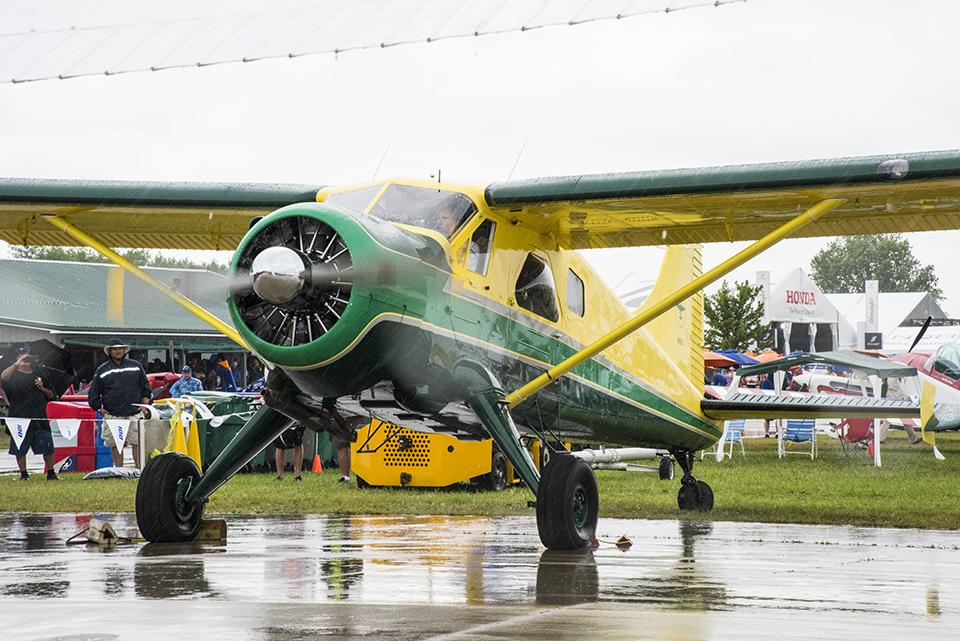 EAA claims the Young Eagles is the most successful youth aviation education program in history. Based on a pilot introducing aviation to a young person on a one-on-one basis, it has now flown two million kids since its inception in 1992. Corporate support comes from a number of companies, and another $2.2 million was raised at the Young Eagles’ gala dinner on Thursday evening. 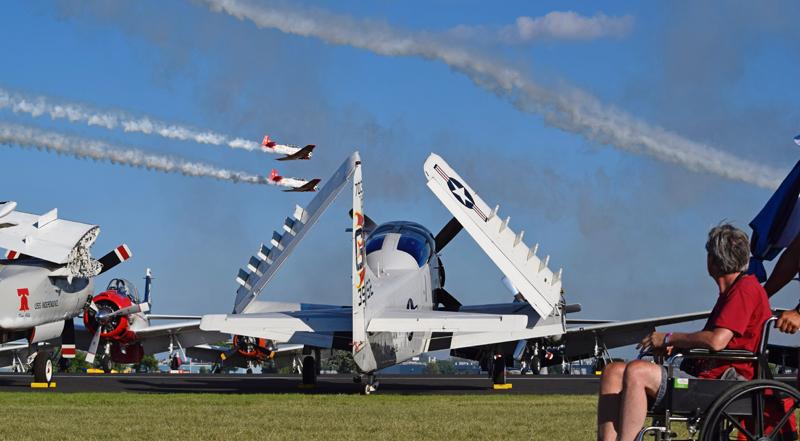 The daily airshow takes on a different perspective from the end of the runway in the Warbids section. Here the Aeroshell Aerobatic Team of four T-6s loops over a line of Douglas Skyraiders. 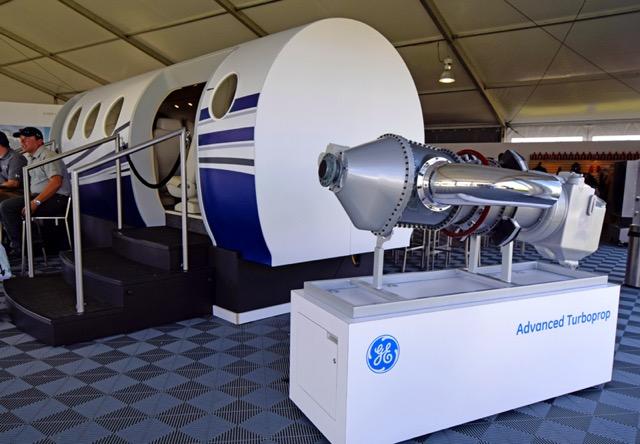 Oshkosh marked the public unveiling of the cabin mockup of the new $4.8 million Cessna Denali large single-engine turboprop, and the first sighting of the mockup of GE’s new 1,300-2,000 shp turboshaft family that will power it. GE is spending $400 million on an all-out assault on the Pratt & Whitney PT6 with the new engine, which it claims is 25% more efficient. The Denali is engineered to achieve speeds of up to 285 kt., full fuel payload of 1,100 lb. and have a range of 1,600 nm  at high speed cruise with one pilot and four passengers and will, Textron Aviation says, outperform the Pilatus PC-12. 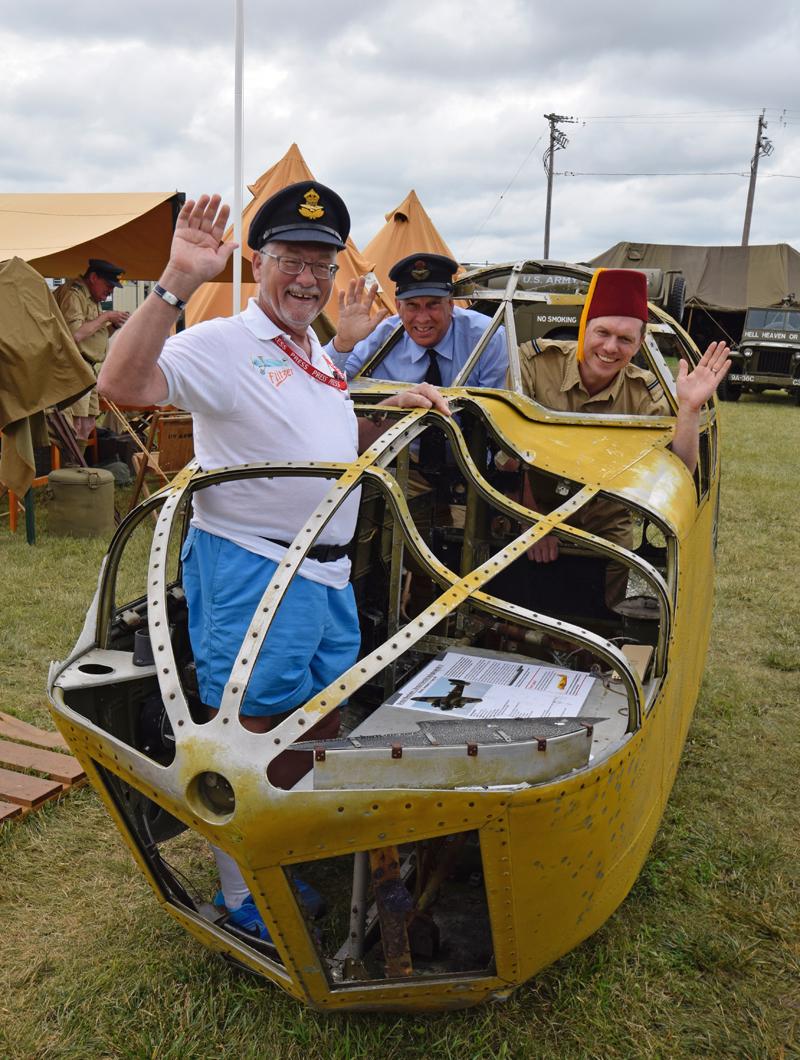 Bringing Back a Bristol

The British Bristol Type 149 light bomber, better known as the Blenheim or Bolingbroke, played an important part in WWII both operationally in Europe and for training aircrew in Canada. Now it’s made its Oshkish debut—albeit just as a nose section. Minneapolis-based airline captain Chris Bobka acquired his Canadian-built Blenheim four years ago and is undertaking the mammoth task of restoring it to flying condition. His example, which probably last flew in 1947, was powered by now-rare Bristol Mercury engines, and he is searching for a pair of suitable propellers. Here, Aviation Week’s John Morris discusses the project with Bobka (center) and regular Oshkosh visitor Thies Eisele from Mulheim, Germany. 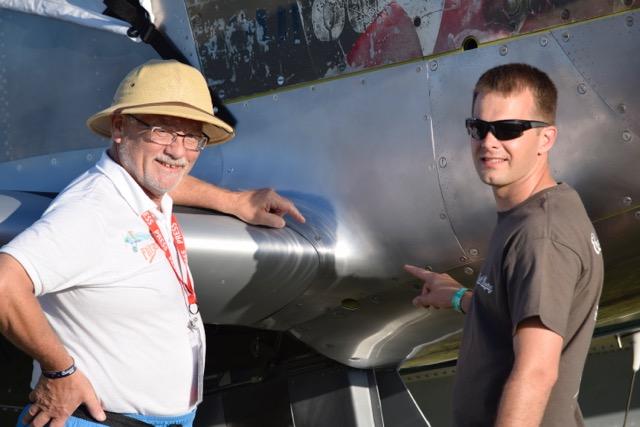 P-51s become ever more popular, but making their compound-curved metal fairings becomes no easier. In fact, many parts that used to be stamped now have to be shaped laboriously and lovingly by hand. Here, Aviation Week’s John Morris admires parts made by Randy Carlson, owner of Carlson Metal Shaping in Fargo, North Dakota. Carlson has shaped metal parts on 30 P-51s and other warbirds (including Grand Champions) over the last decade, including two Mustangs here at Oshkosh. His workshop includes sheet metal shaping equipment such as Yoder Power Hammer, Milwaukee and Waterveliet Planishing Hammers, Pullmax, Erco Flanger, shrinkers and other hand tools. http://www.carlsonmetalshaping.com/ 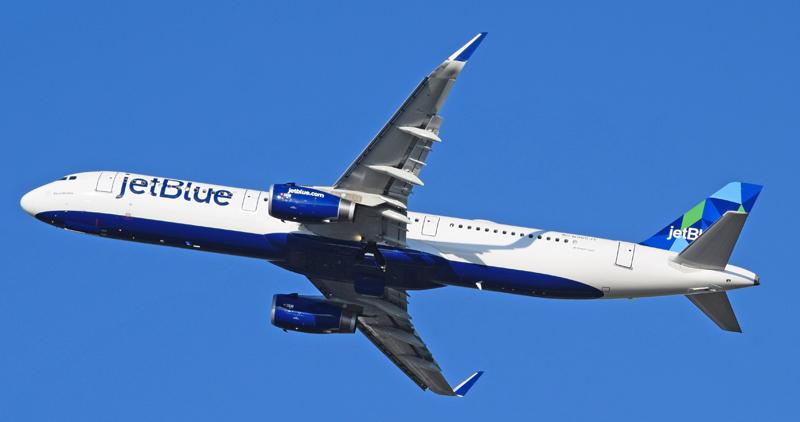 JetBlue brought the first Airbus airliner built in the U.S., an Airbus A321 aircraft named “BluesMobile,” here to EAA AirVenture. “BluesMobile” was delivered to JetBlue in April after being completed in Airbus’ new U.S. Manufacturing Facility in Mobile, Alabama. 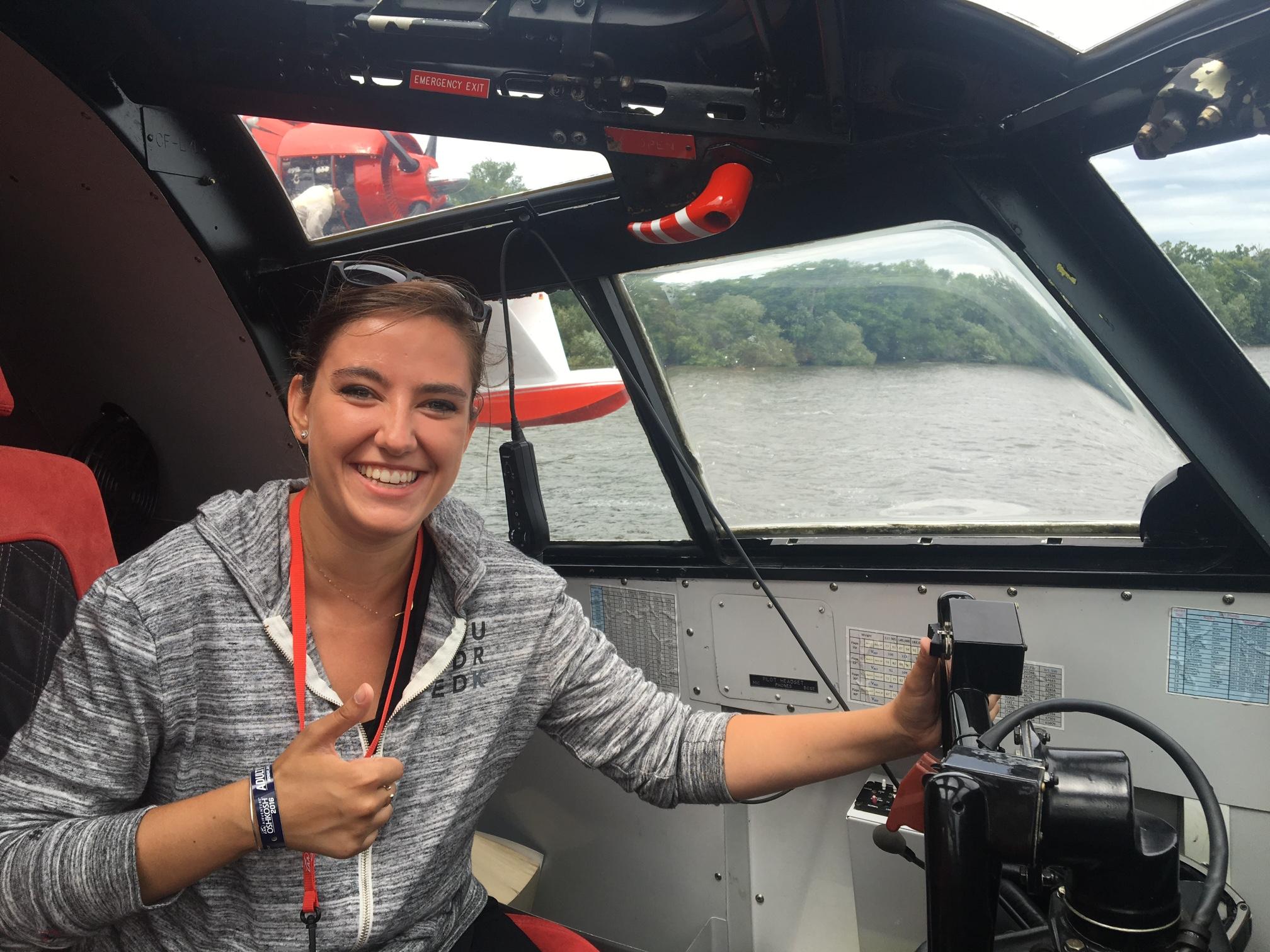 It wasn’t enough to see the mighty Martin Mars: Aviation Week’s Jen Deglmann had to try it out for size. Here she sits in the huge cockpit of the world’s largest flying boat water bomber. The experience was, she says, a highlight of her first visit to EAA AirAdventure.

EAA AirVenture is something to everybody across the whole spectrum of aviation, from flying the two-millionth Young Eagle to shaping metal for the increasing number of warbirds under restoration. You can find all here.