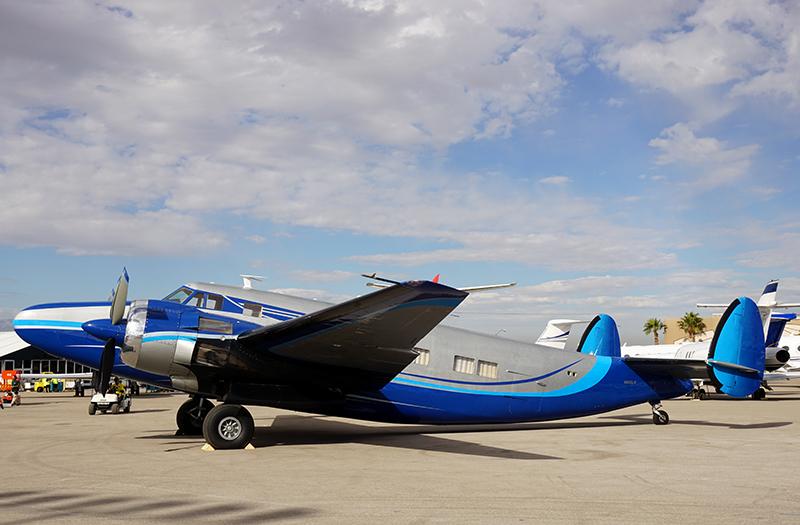 Who will admit to being old enough to remember an earlier NBAA showing by this purpose-built, late-1950s business aircraft – even if there was one? For most attendees, however, this will be a first sighting. Only two of the 17 Howard 500s built remain in flying condition, the aircraft having inopportunely appeared on the executive airplane market just as more modern turboprop and jet designs were taking hold. It looks like one of the Lockheed Lodestars or Venturas that Howard Aero Inc. had previously been converting from military use, but in detail it was, essentially, new-build. And it retains sea-level cabin pressure up to 16,000 ft.; beat that, you young whippersnappers! 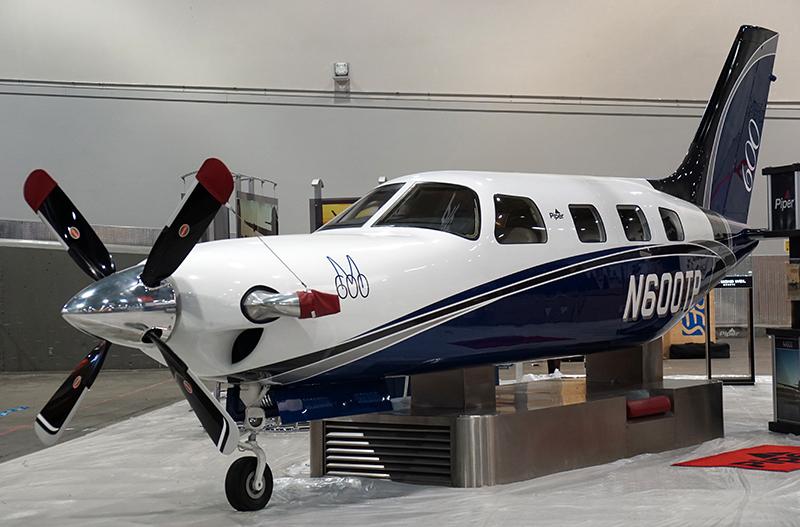 When Piper revealed a facelift of its M-series back in April, the M600 was introduced as the new top-of-the-range, partnering the Matrix, M350 and M500. Delegates to this year’s convention will have to be content with a mockup in the static display for an idea of how the aircraft will look with its Garmin G3000 avionics. Other extras on the forthcoming real article include additional range, anti-icing and the option of a five-blade propeller. Deliveries begin “in 2016.” 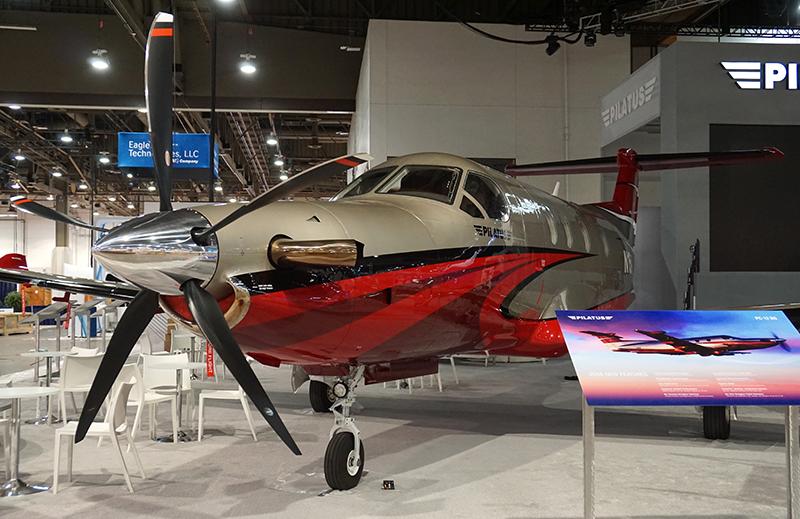 It is not all here yet, but the plan is for Pilatus to show a PC-12 NG at Vegas with the new, five-blade Hartzell propeller that will go on the nose of the NG Model 2016 it announced this week. The full improvement package includes a total of 13 aerodynamic “tweaks” in areas such as door handles, flap actuator fairings, flap and aileron gaps, oil cooler exhaust and antenna locations, the whole adding 5 kt. to cruising speed. The original NG upgrade was announced at the NBAA convention in Orlando, Florida, in October 2006, so the time is right for a further round of improvements. 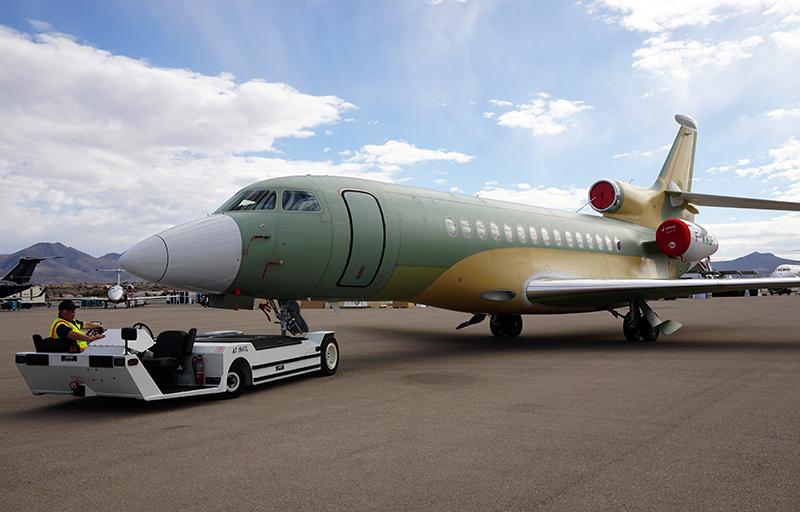 The slightly stretched Falcon 7X was celebrated in absentia at the convention hall a year ago, a few months after being announced, but has surged ahead to become a tangible exhibit this week. At least five are now flying, the first in February. Three are currently in the U.S. for demonstration or fitting out, the latest being the unpainted one on show at Henderson Executive Airport. As might be expected, the type’s public debut was at the Paris Air Show in June, when it made daily flights as encores to demonstrations by its Rafale fighter stablemate. 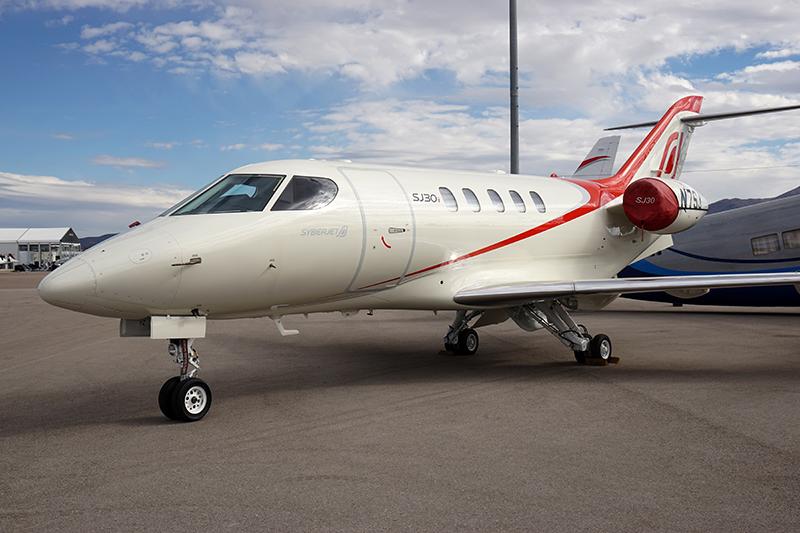 Two for the price of one. SyberJet Aircraft is showing a demonstrator SJ30 in its new, promotional paint scheme, although it may be of more interest to examine the new cabin interior that will go into the SJ30i, together with a SyberVision avionics suite. The nWorX Technologies cabin demonstrator will be found at Static Space 300 and will also provide an impression of the up-engined SJ30x, which will follow after an unspecified interval. SyberJet would welcome your feedback on the new interior before it is set in stone (in a manner of speaking). 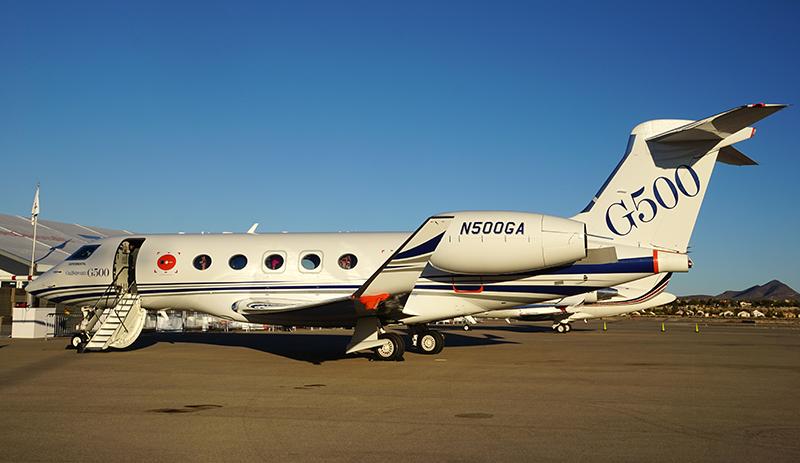 The NBAA Aircraft Directory says it’s a mockup, but a very real Gulfstream G500 made the type’s first cross-country flight on Friday, Nov. 13, to arrive in good time for static exhibition. The airplane flew from Savannah/Hilton Head International Airport into unlucky 75-kt. headwinds and arrived at Henderson Executive 4 hr. 36 min. later, accomplishing the 1,630-nm flight at an average speed of Mach 0.85 and altitude of 45,000 ft. Revealed as a taxiing prototype just before last year’s convention, the G500 first flew in May and will be closely shadowed by the longer fuselage, longer-range G600.

<p>It&#39;s the NBAA debut for a number of new aircraft models. All photos: Paul Brou/ShowNews.</p>