20 Years Of Commercial Aviation Announcements At The Dubai Airshow 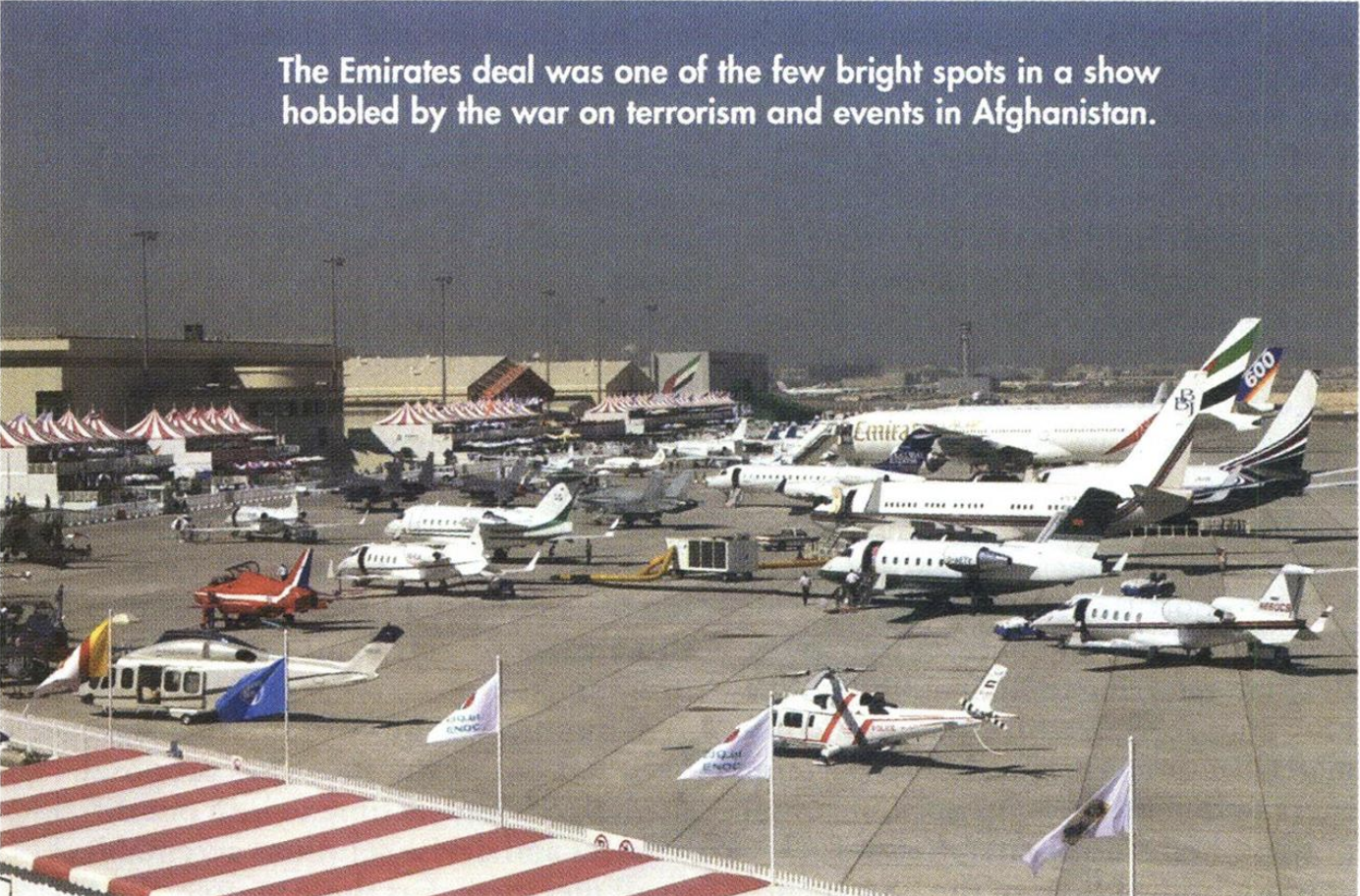 Industry leaders were hoping that this year's Dubai air show would mark the beginning of "back to business" after the Sept. 11 terror attacks that pushed international air transport into its deepest crisis since the gulf war.

The show was the first major industry meeting since the attacks and was seen by many as an indicator of industry health. The undisputed star of the event was local flag carrier Emirates which ordered 58 widebody airliners worth $15 billion, which shifted focus from the military deals that had dominated recent shows to the civil arena. Together with the announcement the previous month by Embraer that it intended to maintain and even expand its 70-100-seat regional jet program, the order suggested that industry fortunes might at last be turning for the better. 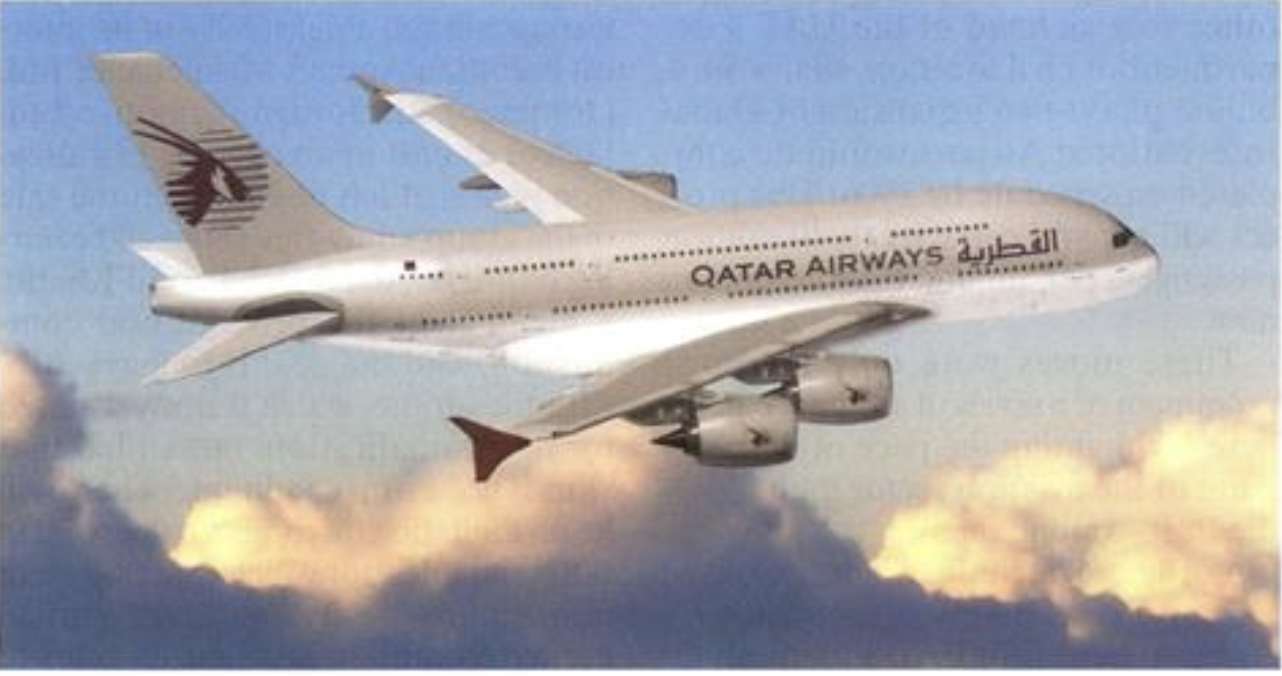 Airbus A380, A340-600 orders stole limelight as Asian airline, airport expansion planed to the dominate air show in 2003.

Airbus had transformed eight preliminary purchase agreements for its Airbus A380 ultra wide-body transport into final contracts, marking the completion of a year-long effort to firm up remaining commitments in the A380 backlog.

The European consortium said on Dec. 11 that it had concluded a contract with Penerbangan Malaysia Berhad, parent company of Malaysia Airlines, for six A380 passenger aircraft that it had agreed to take under an agreement signed in January. The value of the award was not announced, but, based on the list price, it would be worth around $1.6 billion.

The Malaysia Airlines decision came just two days after an announcement at the Dubai air show that Qatar Airways would transform two commitments of its own for the Airbus A380 into firm contracts, and take options for two more 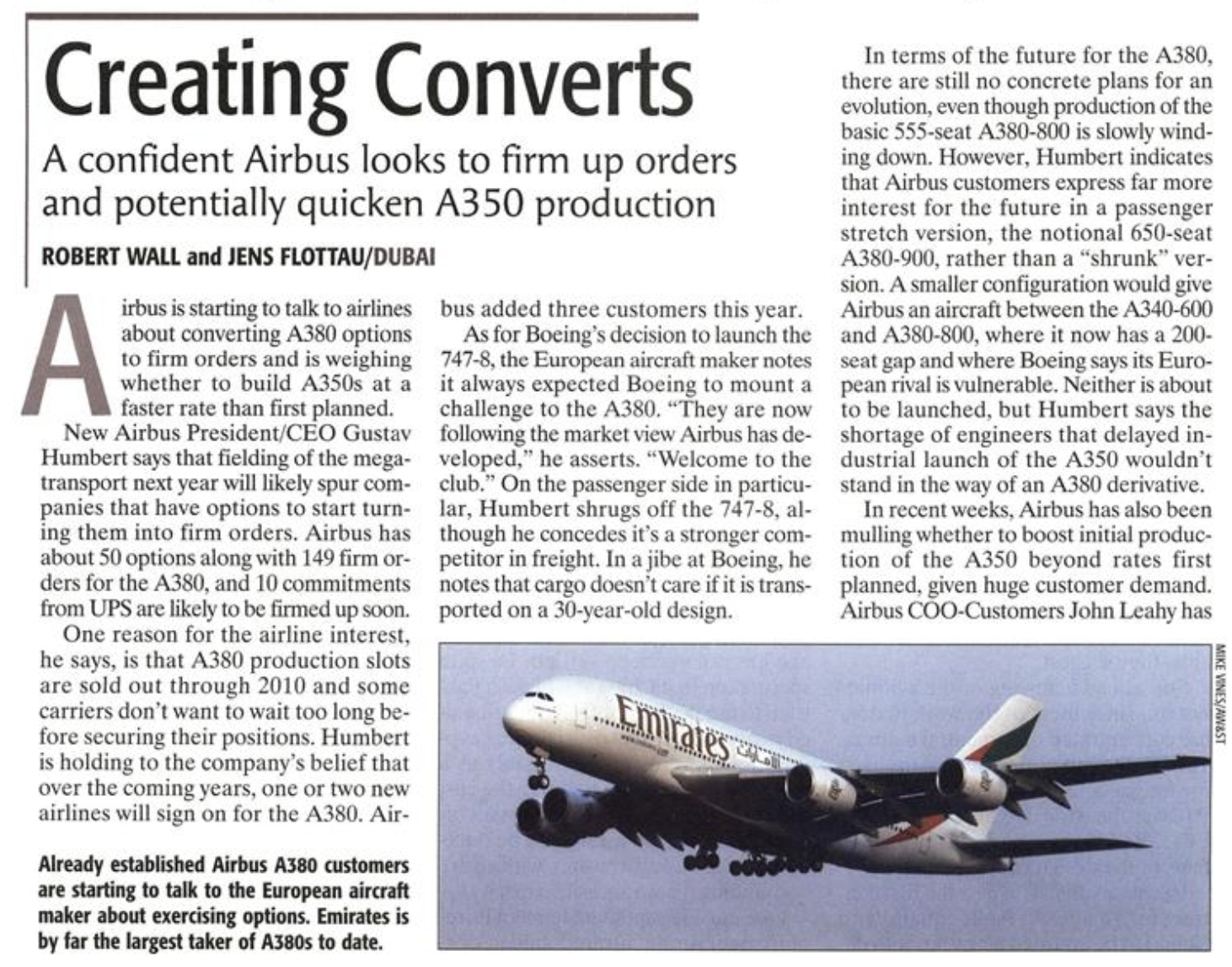 A confident Airbus looked to firm up orders and potentially quicken A350 production.

Airbus was starting to talk to airlines about converting A380 options to firm orders and was weighing whether to build A350s at a faster rate than first planned in 2005. New Airbus President/CEO Gustav Humbert said that fielding of the megatransport in 2006 would likely spur companies that had options to start turning them into firm orders. Airbus had about 50 options at this time, along with 149 firm orders for the A380, and 10 commitments from UPS that were likely to be firmed up soon.

As for Boeing’s decision to launch the 747-8, the European aircraft maker noted it always expected Boeing to mount a challenge to the A380. “They are now following the market view Airbus has developed,” he asserted. “Welcome to the club.” On the passenger side in particular, Humbert shrugged off the 747-8, although he conceded it’s a stronger competitor in freight. In a jibe at Boeing, he noted that cargo doesn’t care if it is transported on a 30-year-old design.

In 2007 Middle East airlines were showing clear signs of growing up. There were $130 billion dollars worth of aircraft orders and commitments at the air show this year, and healthy financial returns were taking prominence over unbridled growth. Airbus received a strong vote of confidence on the A350, with Emirate's making the decision to buy both the -900 and -1000 versions.

There was a focus on regional jets, reflecting an airline shift towards drive focus increasingly on yield optimisation, rather than open-ended expansion. Many of the orders were aimed primarily at fleet renewal rather than building capacity. 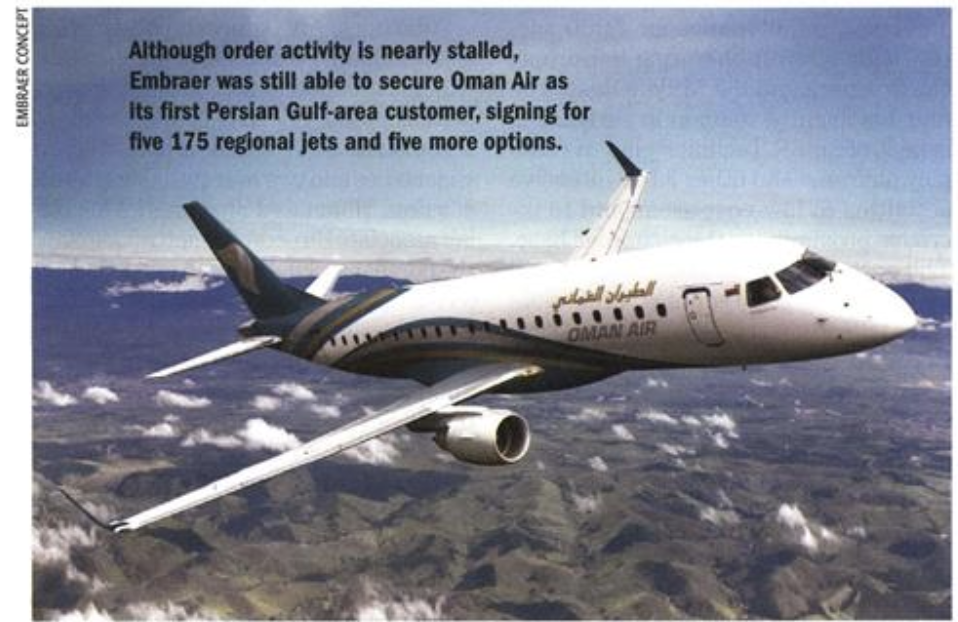 In 2009, Airbus and Embraer were reaching a pivotal year as they mapped out their product strategies, and engine makers had a lot riding on the outcome of those discussion.

Embraer had long been mulling over what to do next, partly in response to Bombadier's launch of the CSeries. The time for deciding whether to build a new aircraft seemed to be moving closer. Engine manufacturers were heavily courting Embraer at the time.

Meanwhile industry officials suggested that Airbus was reviewing its long-term upgrade strategy for the A380 and in the short-term could look at launching an A320 reengining program in 2010.

Mideast carriers ignored economic surroundings and continued growth as they ignored the rising fuel prices and financial results that were hurting by continuing to add capacity. It was predicted in 2011 that traffic in the region would have tripled by 2030. Emirates made a fundamental strategy decision to continue growing despite a rather dramatic earning slump in the first half of 2011. 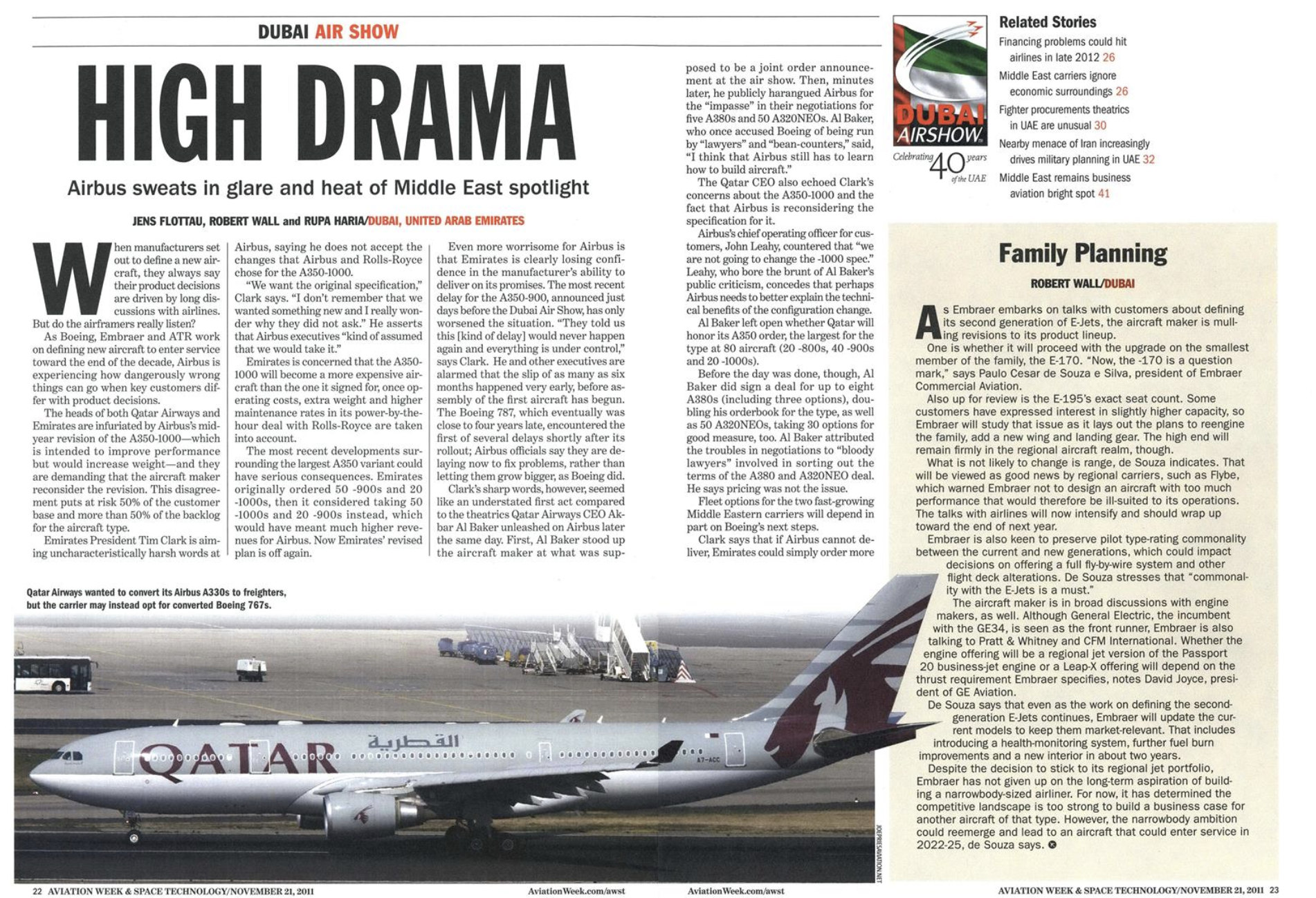 As Boeing, Embraer and ATR were working on defining new aircraft to enter service towards the end of the decade, Airbus was experiencing how dangerously wrong things could go when key customers differed with product decisions.

The heads of both Qatar Airways and Emirates were infuriated by Airbus' mid-year revision of the A350-1000 - which was intended to improve performance, but would increase weight - and they were demanding that the aircraft maker reconsider the revision. This disagreement put at risk 50% of the customer base and more than 50% of the backlog of the aircraft type. 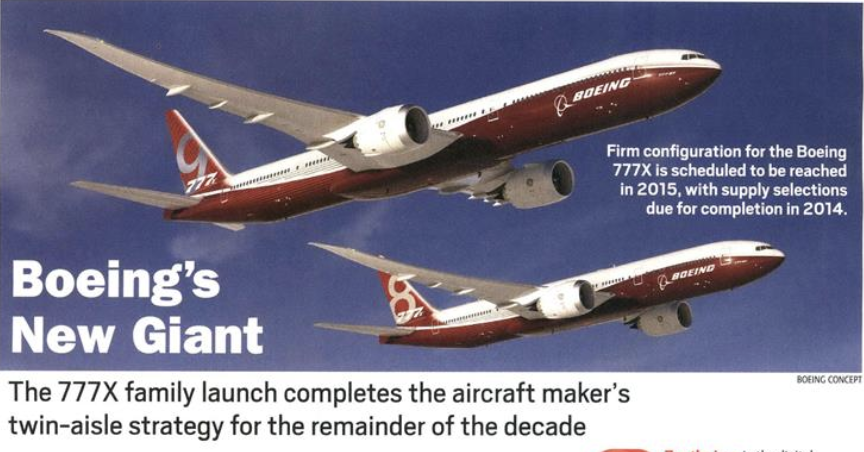 The new twin-jet combined an updated version of the otherwise conventional current 777 fuselage with all new GE9X engine and an all-composite wing. The 777X was not only the heir-apparent to the 777-300ER, Boeing's dominant long-haul twin, but was also the company's challenger to the Airbus A350.

The three big Persian carriers lived up to their promises and placed record breaking orders at the 2013 show. The scenes at the air show perhaps best illustrated the current state of the industry in 2013: Boeing CEO Jim McNerney sits at the podium flanked by Emirates Chairman Ahmad Bin Said Al Makhtoum and Qatar Airways CEO Akbar Al Baker, and the three announced deals for 200 Boeing 777Xs worth close to $100 billion, launching what was Boeing's next big widebody program. After McNerney left the stage, his seat was filled by Airbus CEO Fabrice Bregier, listening and smiling as Ahmad stated his airline was ordering 50 Airbus A380s - a $20 billion deal at list prices.

Toward the end of Day 2 of the Dubai Airshow 2015, Airbus CEO Fabrice Bregier finally had some hopeful news for Emirates, the hometown airline that has been pushing the manufacturer to move ahead with an advanced, reengined version of its A380 airliner. “We think we are going to do it,” Bregier said of the A380neo.

His and similar comments by Chief Operating Officer for Customers John Leahy were the clearest signs yet that Airbus was finally headed toward a decision in favor of investing several billion euros to revive the program. 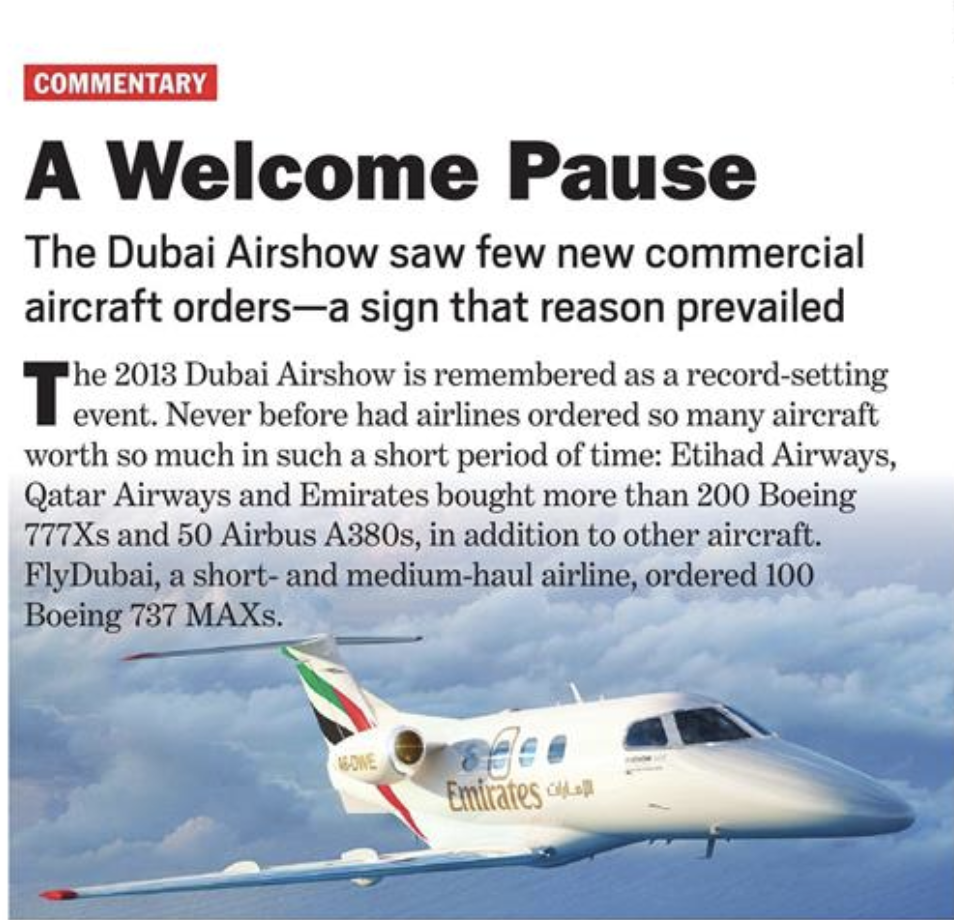 After the record setting 2013, there were few new aircraft orders seen. It broke another record similar to its predecessor: the record for the show with the fewest number of orders in recent memory. Vietjet Air bought 30 Airbus A320neos. And Emirates did buy new aircraft—a handful of Embraer Phenom 100s for its training academy. 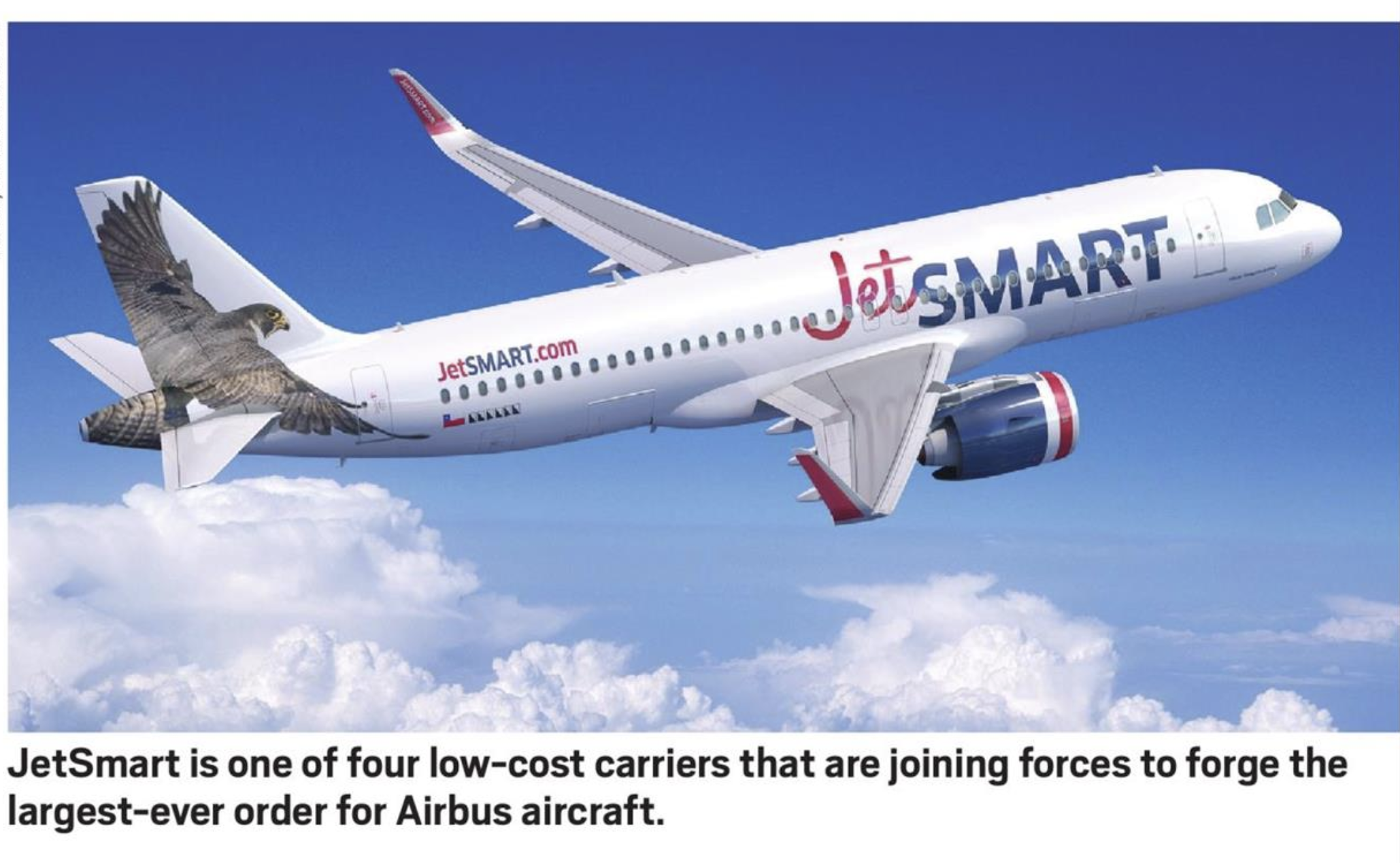 Buzz was rife throughout the venue: Who was this customer said to be placing a very big order with Airbus the next day? For how many aircraft? And what type? Emirates could be all but ruled out given the clash over its planned and then called-off A380 order. And FlyDubai, an all-Boeing 737 operator, was equally unlikely. That carrier later the same day bought up to 225 737 MAXs.

The Big Reveal—that Bill Franke’s private equity firm Indigo Partners was behind the megadeal for 430 aircraft—was only half-surprising in hindsight. Four other carriers also joined forces: Wizz Air (Hungary), Frontier Airlines (U.S.), JetSmart (Chile) and Volaris (Mexico). Connecting several airlines for one big order (comprising separate contracts for each airline) is something that legacy carriers that formed global alliances have failed to do in the 20 years since they were created. It was the emergence of big airline groups in Europe—connected through equity stakes such as International Airlines Group (IAG), Air France-KLM and Lufthansa Group—that made combined orders possible.

To read more about orders made at the 2017 Dubai Airshow, you can find the coverage here. 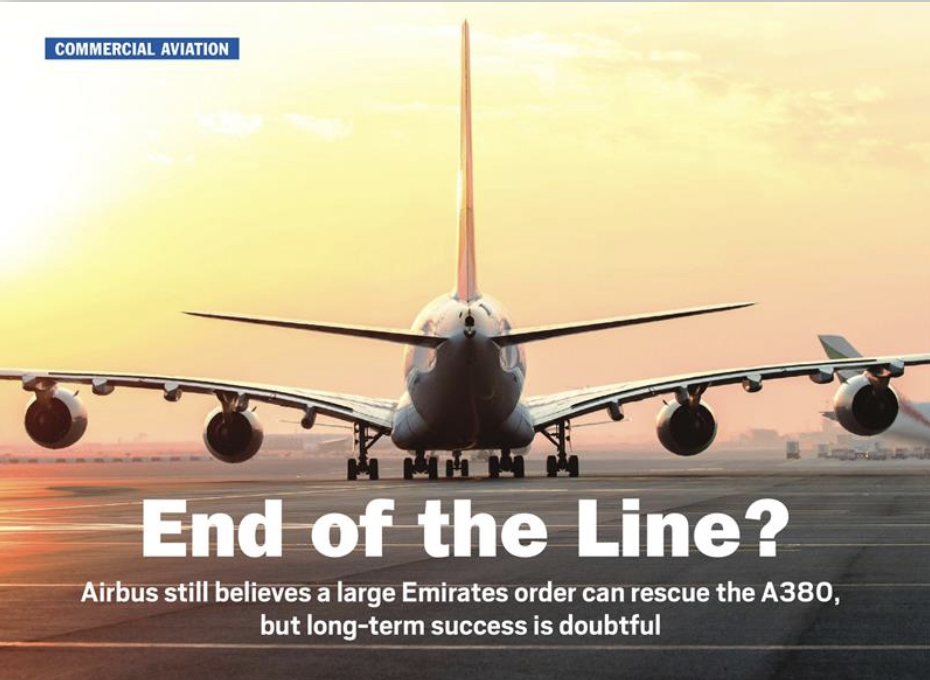 In what was a very surprising turn of events, Airbus was subject to a public humiliation by one of their most important customers. Instead of turning up to the Dubai Airshow conference room to meet the Sheikh Ahmad bin Saeed Al Makhtoum, the chairman of Emirates and sign the expected A380 order to end months of intense negotiations, they met their Boeing counterparts. After waiting an hour, when Ahmad arrived he was accompanied by Boeing's Commercial Aircraft President and CEO Kevin McAllister, and followed by signing a surprising order for 40 Boeing 787-10s. It wasn't until after he left that people in the room realised there would be no A380 order.

And so what was expected to be a spotlighted agreement between longtime business partners turned into an unprecedented public humiliation. Airbus executives canceled all subsequent planned public appearances at the air show, except for the announcement of the big Indigo Partners A320neo family order later in the week. No interviews were allowed. And an event that is typically a display of confidence became the stage for disaster, a public rift between Airbus and one of its most important customers that has overshadowed what little hope was left for the A380 program. 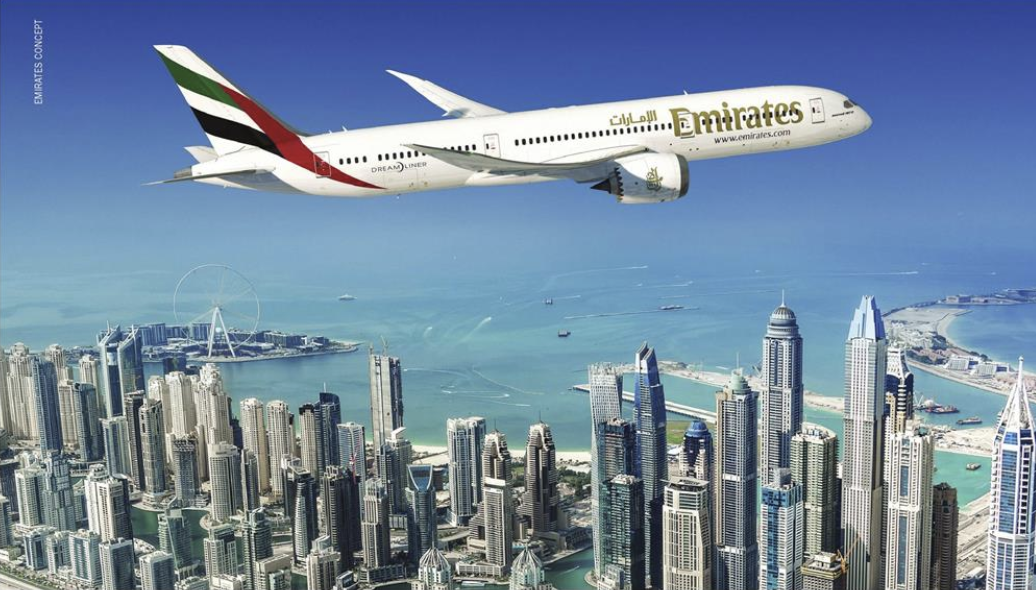 Emirates' preliminary deals were reaching their conclusion after many long nights of internal negotiation and debate, and it was clear the carrier would be changing substantially from an airline purely focused on the very largest aircraft available to one with a more differentiated fleet that would enable it to enter markets it has previously been unable to serve.

To read more about orders made at the 2019 Dubai Airshow, you can find the coverage here 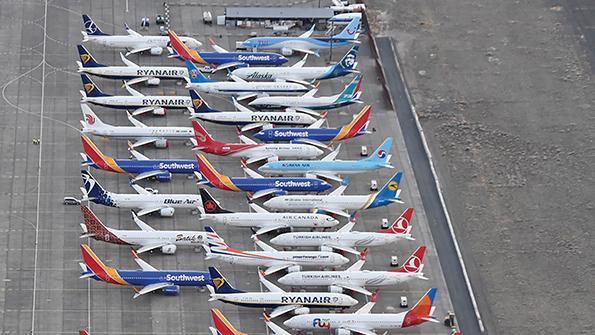 Boeing’s perceived public relations push to support the 737 MAX’s return to service was under fire heading into the Dubai Airshow, and the company responded in the best way possible: it let customers take over the narrative.

The MAX program booked its first announced firm orders since the model’s mid-March grounding and added a sizable letter of intent from a new customer. The firm orders came from existing MAX customer SunExpress, the Lufthansa Group-Turkish Airlines joint venture, for 10 737-8s and an unidentified operator for 10 737-7s and 10 737-10s.

Dubai Airshow has seen unprecedented aircraft orders and announcements across the last 20 years of the event. From the 2013 777X and A380 order avalanche to the industry coming back together after 9/11 to show its strength and health, take a look through the major announcements Aviation Week & Space Technology have reported on over the years.

Find all coverage of the 2021 Dubai Airshow here