What are the planned maintenance needs of your electric aircraft and how do they differ from rotor- and fixed-wing aircraft?

Let me first describe the aircraft and how it is different from existing aircraft. We’re developing the Jaunt Journey, an eVTOL that makes use of Jaunt Air Mobility’s patented Reduced Rotor Operating Speed Aircraft (ROSA) technology, which combines the best of airplanes and helicopters with a powered rotor for hover efficiency and also wings and propellers for cruise performance. We validated the configuration through various flight test demonstration programs, so although our aircraft is a new and novel configuration, its patented technologies have been flight tested over the last decade. We envision the supportability to be aligned with existing aircraft. We do have new technologies onboard—it is going to be all electric. It’s got electric propulsion, which is relatively new for aviation, so there will be new maintenance requirements that will be needed to support the electric motors, gearbox and controllers, and batteries. But, at same time, our aircraft looks like a combination of a conventional helicopter and a conventional airplane in that we have a single main rotor and traditional control surfaces like ailerons and rudders, so systems resemble many similar ones that you see in aircraft flying today. We acknowledge this isn’t just about the aircraft—it’s also about the infrastructure, MRO and supportability—so we have to work with all of our partners to ensure when this aircraft enters service, it will be able to be supported for successful commercial operations.

What are the unique engineering aspects, including ROSA technology? Do they warrant any unique aftermarket needs?

Our design doesn’t include any complex systems. This is an area that we stand out in the industry with our configuration because we don’t have any complex tilting wings or rotating motors. We did this to reduce the complexity, which also reduces the need for additional maintenance and servicing. We’ve really tried to simplify the aircraft design, including the ROSA technology, to ensure that we do not impose additional aftermarket requirements on our operators. That is important from an economic and reliability standpoint—we want to make sure the reliability of the aircraft is high and is able to keep up with the high utilization and tempo that we envision. Nonetheless, one of the novel technologies we have is the electronic propulsion system, and second, the aircraft is a composite structure with advanced thermoplastic materials, so those are two examples where we work closely with our Tier 1 suppliers to ensure those systems can be serviced by MROs that exist today. Our objective is to go to market with an aircraft that can be supported from day one. 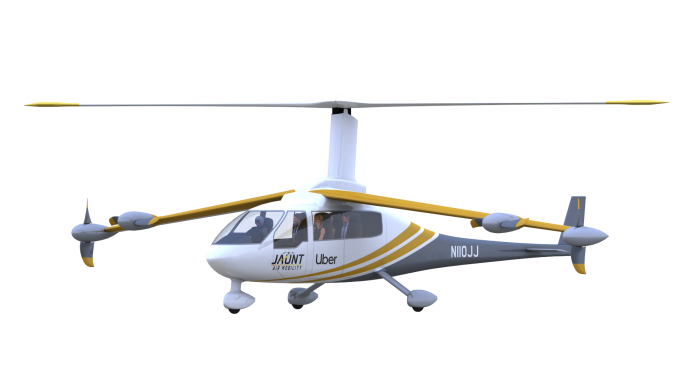 What do expect the utilization and tempo to be for this aircraft?

Depending on the city and type of operation—and maybe 5-10 vertiport locations around a regional area—these aircraft will fly short legs, 10-20 nm legs between vertiports. We can carry four passengers, operating 10-12 hrs. per day, and depending on what type of operation it is, we could make 7-10-min. turnarounds at vertiports. Because this is an all-electric aircraft, we will need charging infrastructure that will provide the necessary power to allow it to fly to the next destination. We have a battery technology that allows us to fly several legs under one charge. Eventually the aircraft will have to get recharged, so it is a complex operational analysis that has to take place to meet passenger demands, but you’re also subject to the constraints of the charging technology and weather.

What’s the roadmap for the aircraft development?

We target entry into service 2026-27. We are going through the aircraft development program now and production should start 2024-25. But we can’t wait until then to have everything in place for the infrastructure and for all of the services, including the passenger booking system, needed so we are actively working within our company and with our partners to get companies that want to support electric aircraft in the future. One of biggest challenges that we have to overcome is the charging infrastructure—the energy providers' centers—so we are working with energy companies to try to leverage existing infrastructure, such as airports and heliports, to see how we will be able to provide energy to those locations. In addition, as we start to develop new vertiports, we have to work with those same organizations and urban planning groups to make sure vertiports will be built and ready for operations. That process takes a long time.

What are the main challenges of integrating urban air mobility into communities?

This all-electric aircraft will bring many benefits to society—it’s quiet and brings substantial improvements over existing helicopters and vertical takeoff and landing aircraft. It will also cost less to operate so it will cost less for customers to use. It will result in a mode of transportation that should open up mobility in urban and regional areas and increase economic development, so there is a lot of value this technology brings. But as a result of it being new, there are several challenges we have to overcome, but most of these reside outside of the aircraft.

The first is airspace integration: we envision operating at low altitudes in urban environments so there are air transport management issues to solve. We are working with industry and government organization such as NASA and the FAA to develop the right airspace architecture.

The second is the physical and digital infrastructure, including how do we cleanly produce and distribute that energy and get it to the right locations in a way that is minimally disruptive.

The third—and most important, in my opinion—is public acceptance. The key thing is to demonstrate and convey the benefits of this aircraft. That is why you see a lot of technology demonstrators—we hope to have one soon too—to show the public how quiet and clean this technology is and ultimately how those two things translate into an affordable way to move people around.