Who Has The Edge In The U.S. Air Force T-X Trainer Competition?

In the latest version of the T-X draft request for proposals (RFP), the Air Force threw contractors a curveball—incentivizing industry to exceed the threshold requirements for specific performance aspects. For the aircraft’s crucial G-capability requirement, this means that for every 0.1g above the 6.5g threshold, and up to the 7.5g objective, the bidder will receive a bonus. In other words, for two T-X proposals at the same price, the one with the higher sustained-G capability will be rated higher overall. Depending on the cost of the competing solutions, a proposal with a slightly higher price tag for a greater sustained-G capability could receive the better rating.

The Air Force will release a final RFP in December, and anticipates awarding a contract in 2017. T-X initial operational capability is planned for 2024. 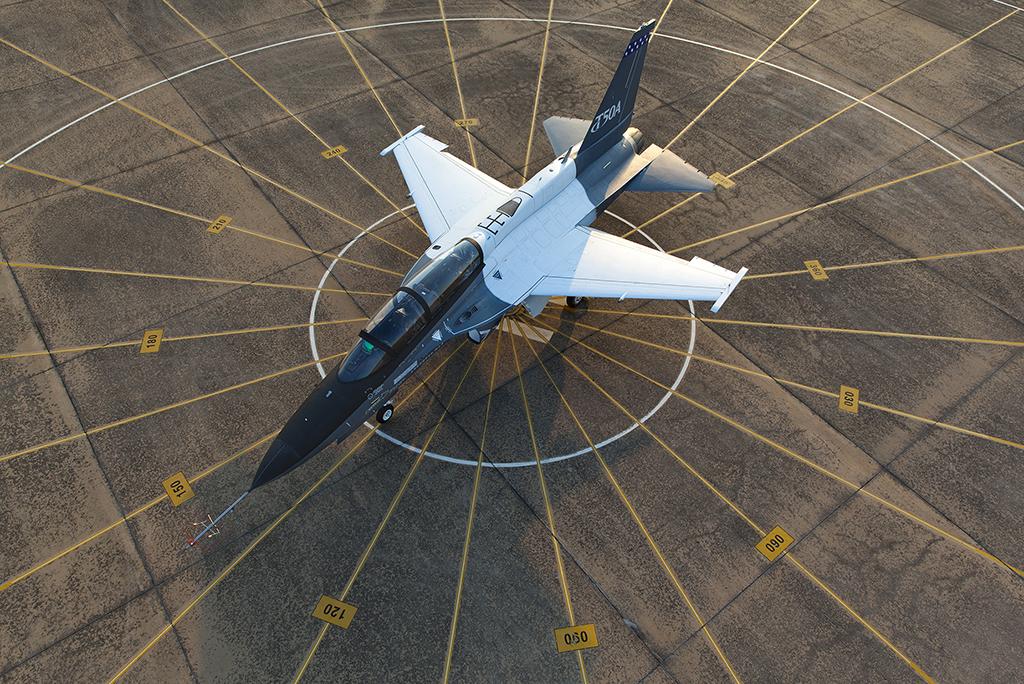 Lockheed Martin and Korea Aerospace Industries’ (KAI) T-50A is a variant of KAI’s T-50, currently in use with the South Korean, Indonesian and Philippine air forces and recently ordered by Iraq and Thailand. Codeveloped with Lockheed’s Skunk Works, the T-50A will be built in Greenville, South Carolina. 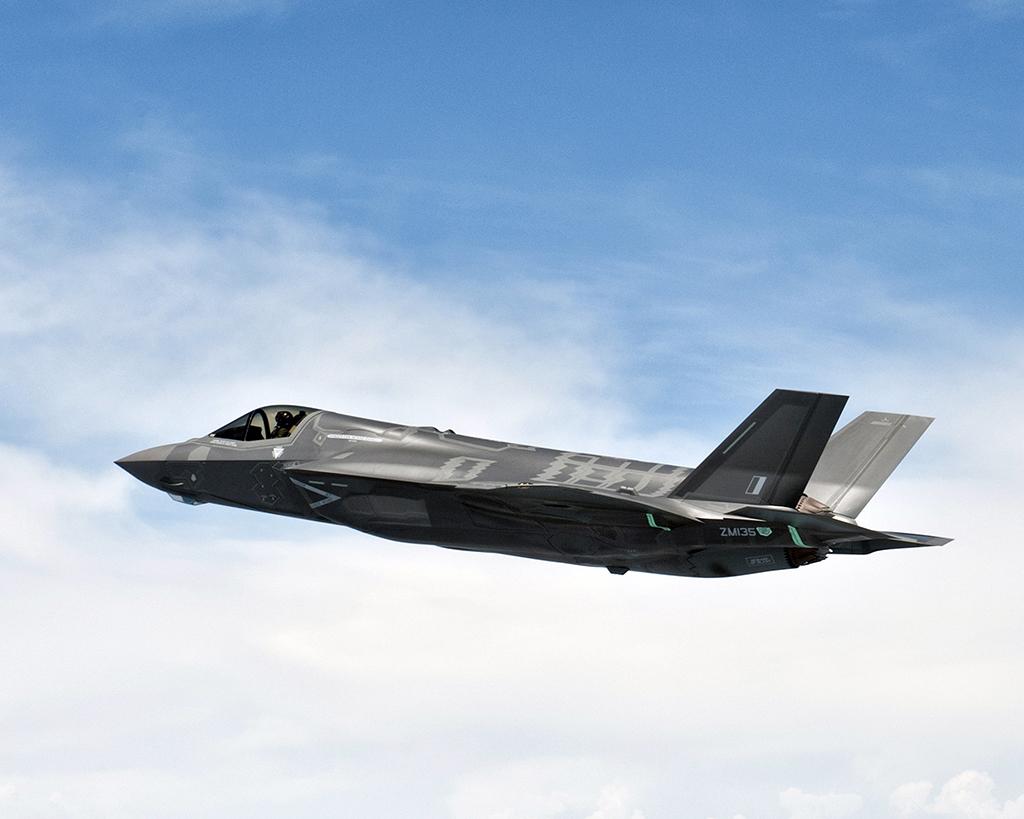 > Proven design. The T-50A is an upgrade to an existing design, which reduces cost and risk. Lockheed will promote the T-50A as the “lowest-risk, lowest-cost solution that gets us most of the way,” says an industry analyst.

> Part of a family. Lockheed’s T-50 would transition easily to the Air Force’s fleet of other Lockheed aircraft—the F-35 and F-22. 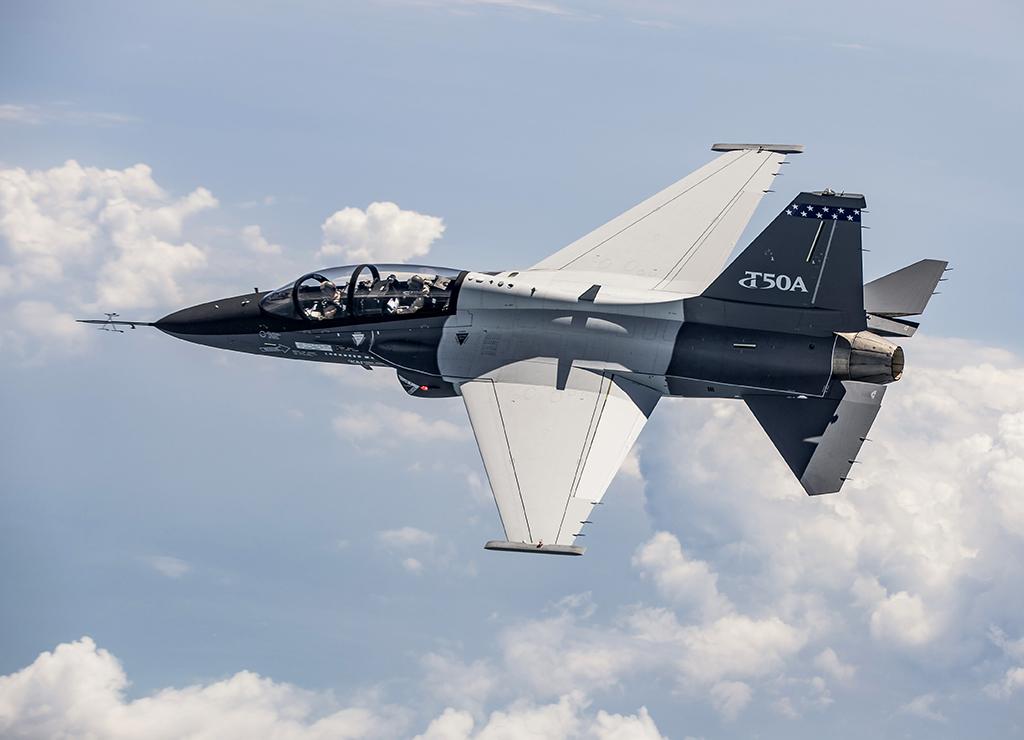 > Limited flexibility.  The T-50 may struggle, particularly as the requirements change. Competitors may have more flexibility to meet the terms of the solicitation if they are developing a new aircraft rather than modifying an existing one. That limitation may be exacerbated if the Air Force continues to incentivize performance.

> Lacks backup power. The single-engine T-50 has no propulsion redundancy, which could be a safety concern for inexperienced pilots. 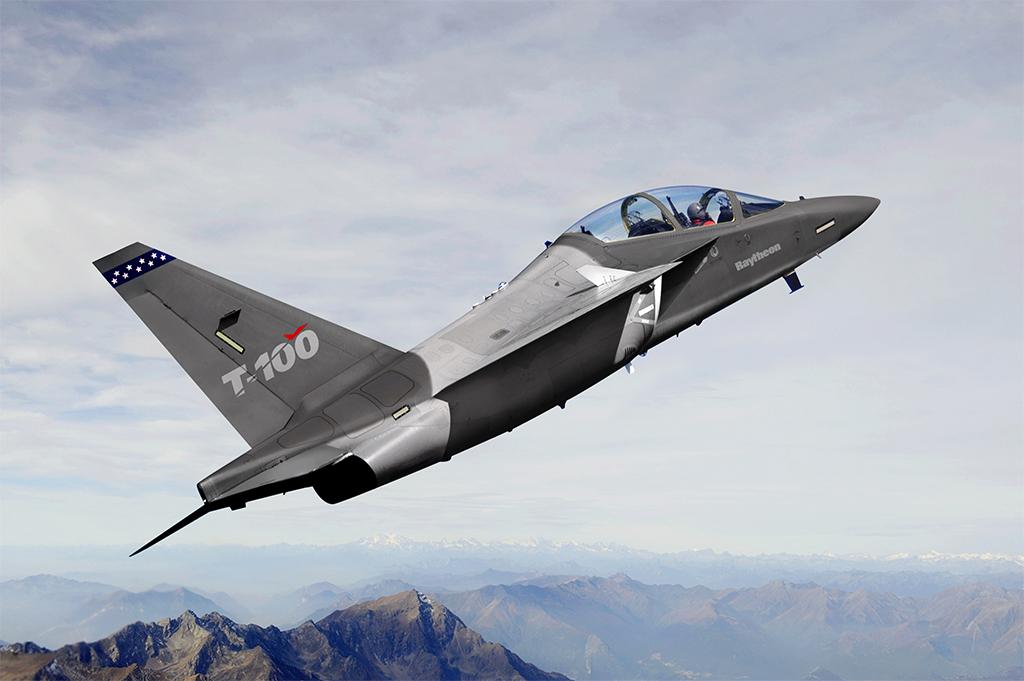 The T-100 is based on Leonardo’s (formerly Finmeccanica) two-seat M-346
currently operated by the Israeli, Italian and Singaporean air forces, and
the first delivery to Poland is expected by the end of the year. Raytheon is the prime contractor, while Leonardo provides the airframe; CAE designs and
manufactures the simulation equipment, training systems and courseware; and Honeywell Aerospace provides the propulsion system. Raytheon has said the T-100 will be assembled in the U.S. but has not announced a location. 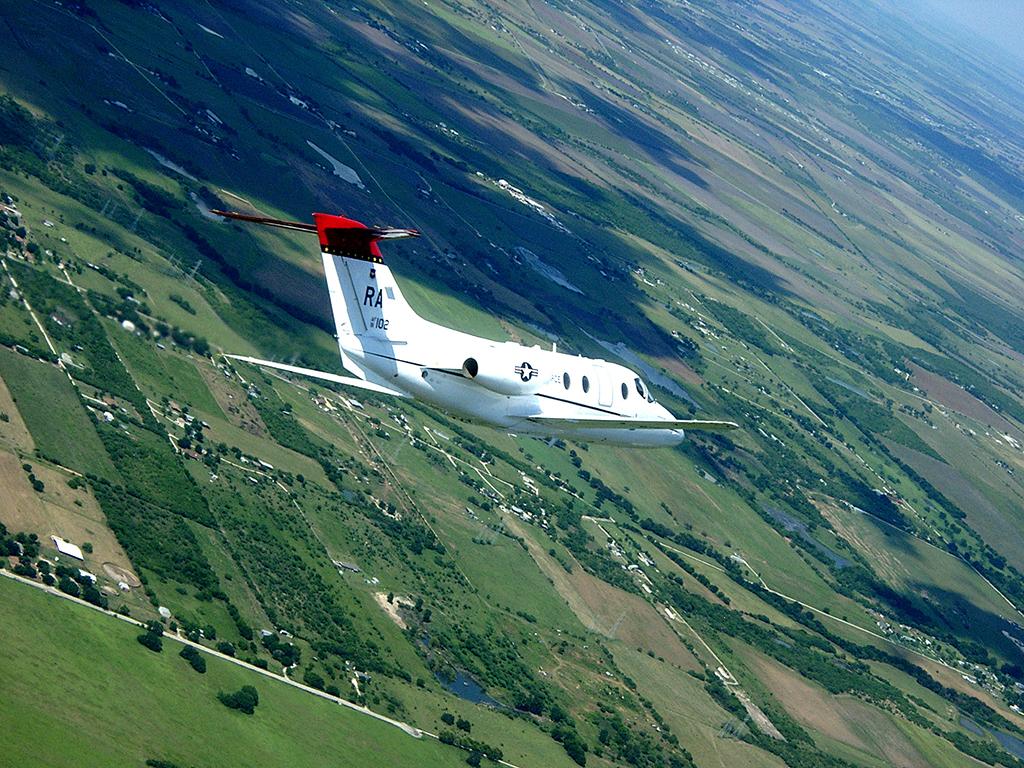 > Proven design. The T-100 is likely lower-cost and lower-risk than its
clean-sheet competitors.

> Technology upgrade. Leonardo says the T-100 is the only proposal with a
virtual embedded training capability—live, virtual, and constructive (LVC)—
that enables pilots in the air to train jointly with their colleagues in simulators on the ground—a huge plus, given the U.S. Air Force’s shortfall of airframes on which to train. Pilots in Israel and Italy are already training with the new LVC system. 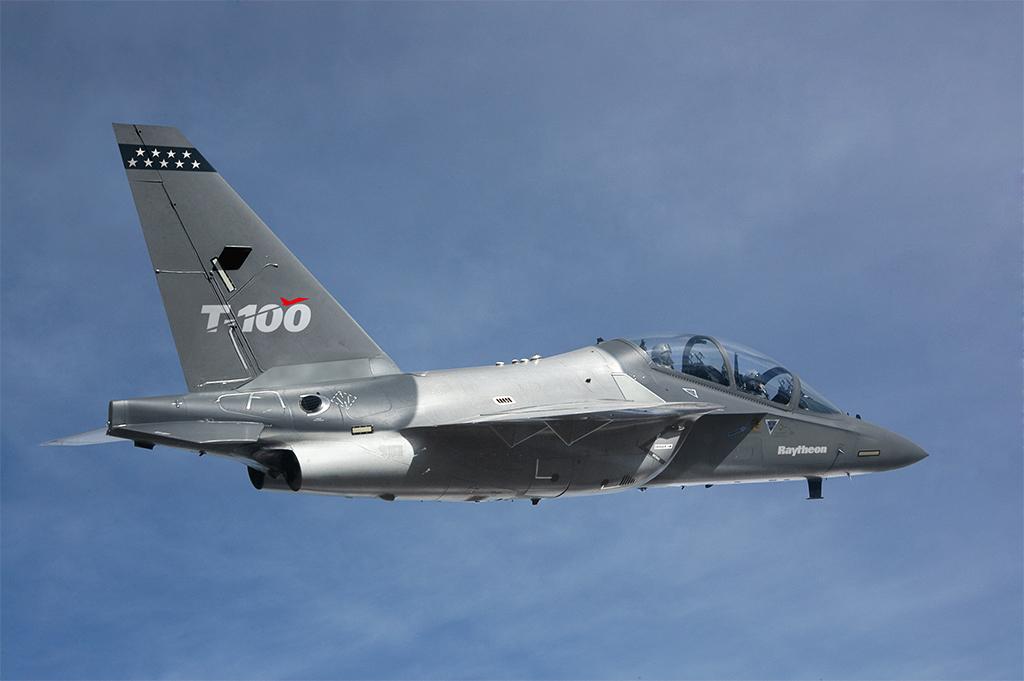 > Little wiggle room. While Raytheon says the T-100 “easily meets and exceeds” the T-X minimum-G, instantaneous-turn and sustained turn-rate requirements, Leonardo chief test pilot Enrico Scarabotto told Aviation Week last year that the aircraft’s performance is “on the line.” The most recent draft RFP will likely drive up the already high standard for T-X performance, which could be a  disadvantage for the T-100.

> Less power. Raytheon touts the T-100’s twin F124 turbofan engines, provided by Honeywell Aerospace, as a safety advantage. But the F124 is not as powerful as GE’s F404. 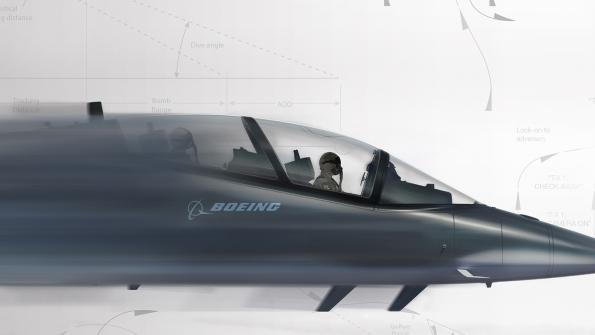 Official Unveiling
​Boeing will officially reveal its clean-sheet design for the T-X competition at a Sept. 13 ceremony in St. Louis. The company did give the public a sneak peek in August, launching a promotional website containing new teaser images of the aircraft. Those artist renderings and associated videos reveal a should-mounted, shallow-anhedral wing configuration with a fuselage-mounted landing gear. The wing and tail platforms are similar to those of the T-38, and the aircraft has a flat-bottomed, rounded nose section with box-like pitot inlets on either side of the fuselage.

Black Diamond
While not much is known about Boeing’s T-X offering, the company believes a closely held manufacturing tech­nology initiative, code-named Black Diamond, will give it the competitive edge—though this did not help it much in the Long-Range Strike Bomber competi­tion, which went to Northrop Grumman. Black Diamond, led by Boeing’s Phantom Works, aims to reduce the cost of future aircraft programs by infusing more automated assembly into complex aircraft structures. Lowering manu­facturing costs while maintaining the flexibility to build a high-performance aircraft could put Boeing ahead in the T-X competition.

The Industrial Base Question
Another argument in Boeing’s favor is balancing the industrial base, although it is unclear how much weight that holds in the T-X contest. Lockheed has the F-35 and Northrop has the Long-Range Strike Bomber; without a new military aircraft program, Boeing’s St. Louis  factory may close. Given the importance of the T-X contract to Boeing’s military aircraft business, the company will likely pull out all the stops in making its bid. 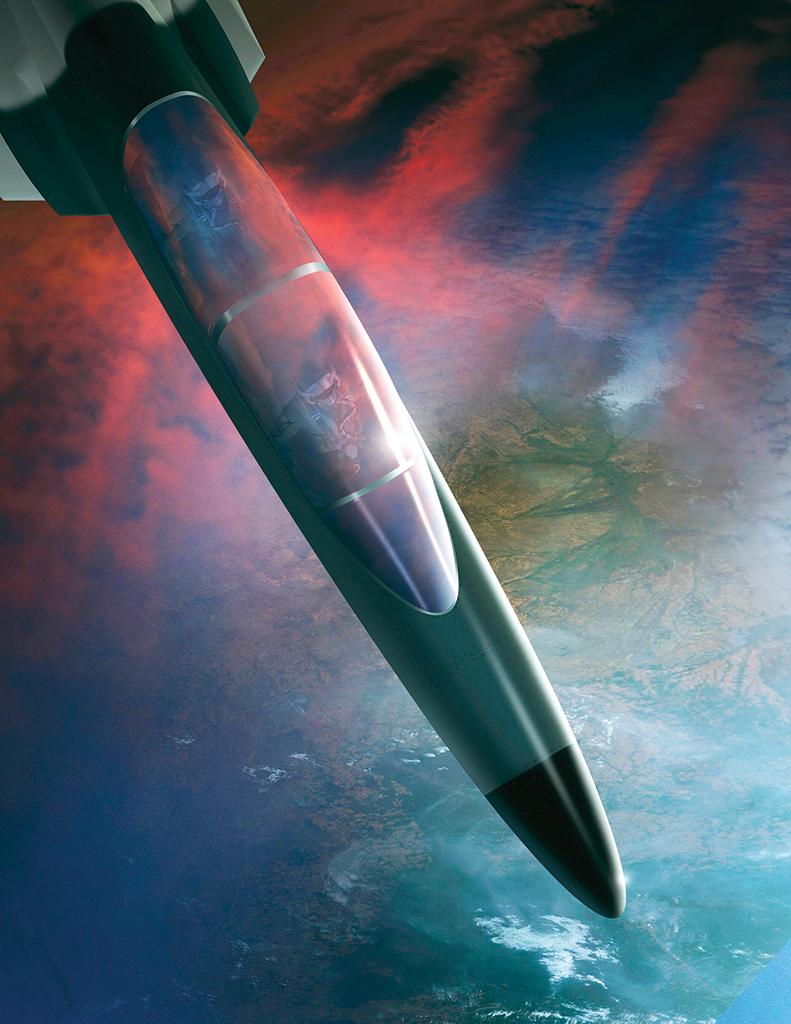 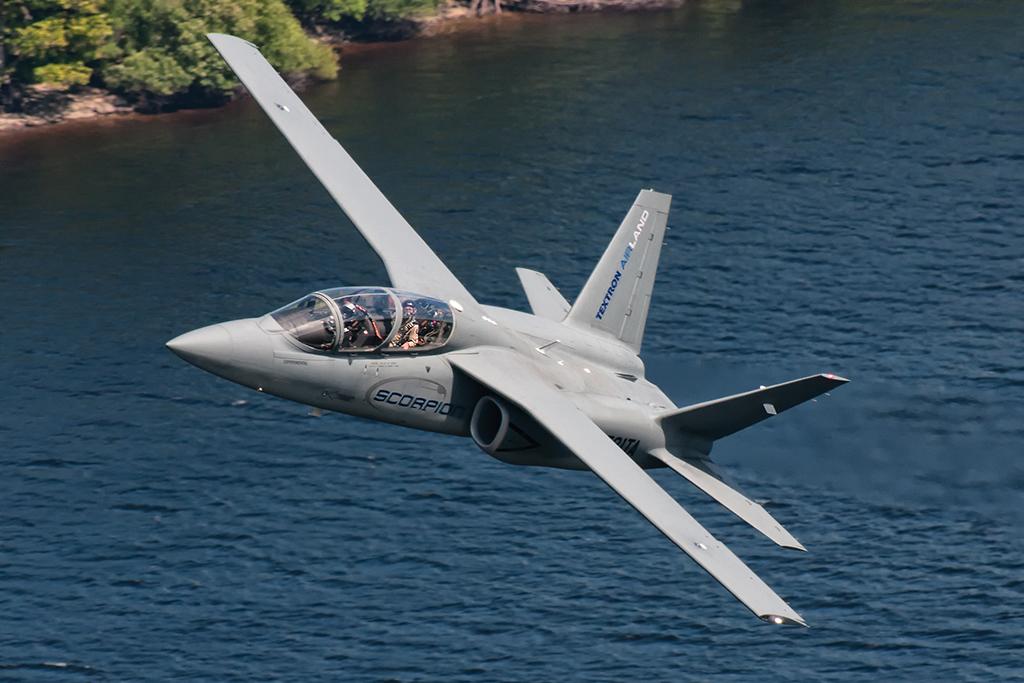 Textron Airland had floated the possibility of offering a derivative of its twin-engine Scorpion jet, but it looks increasingly as if the surveillance and strike
platform will not meet the Air Force’s stringent performance requirements. Still,
a Textron spokeswoman says the company is waiting to see the service’s formal
requirements and time line before making a final decision.

As the U.S. Air Force begins to bring the Lockheed Martin F-35 online, the service is looking for a new fleet of aircraft to train the next generation of pilots. Four industry teams are vying to win the contract to build 350 T-X aircraft and associated training systems—an opportunity lucrative in itself, but one that will also provide the winning team an inside track to any number of international customers who buy the F-35.