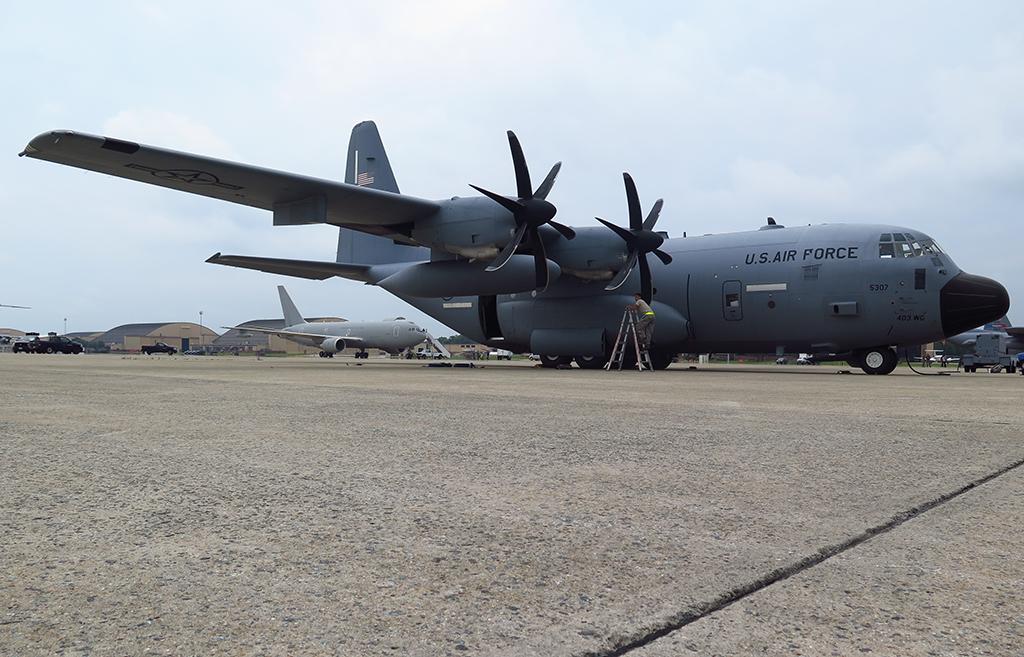 This WC-130J, Tail No. 85307, typically flies into tropical and winter storms and hurricanes at around 5,000-10,000 ft. depending on the tasking of the National Hurricane Center and safety considerations. The lower they fly, the better the weather data, according to the flight crew. The Keesler AFB’s six-blade-propeller C-130Js were among the first to be delivered to the reserve, joining the 53rd Weather Reconnaissance Sqdn. between 1999-2005.

Each is operated by a minimum of five crewmembers—pilot, co-pilot, navigator, loadmaster and meteorologist—and is equipped with a wing-mounted stepped-frequency microwave radiometer that continually gathers precipitation and windspeed data during the flight, along with a tube-delivered dropsonde system. Those perishable capsules transmit weather data while descending and deactivate as they hit salt water. 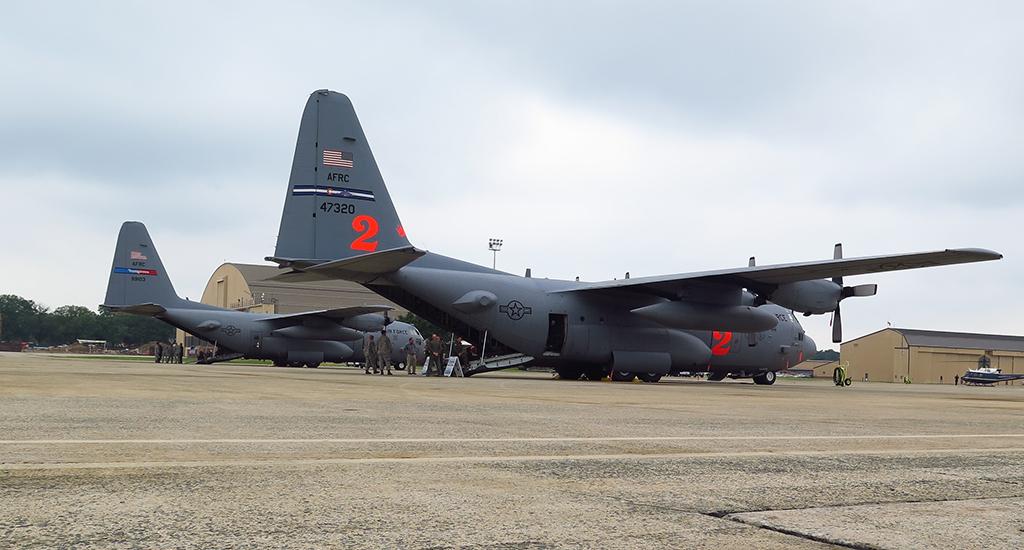 On the flight line at Andrews were two other dual-hatted Air Force Reserve birds: the Modular Airborne Firefighting System (MAFFS)-equipped C-130H3, Tail No. 47320 of the 302nd Airlift Wing at Peterson and an aerial spraying aircraft from the 910th Airlift Wing at Youngstown. The C-130H3 provides firefighting support to the U.S. Forest Service during the June-September fire season. This particular airframe recently returned from a deployment to Afghanistan. 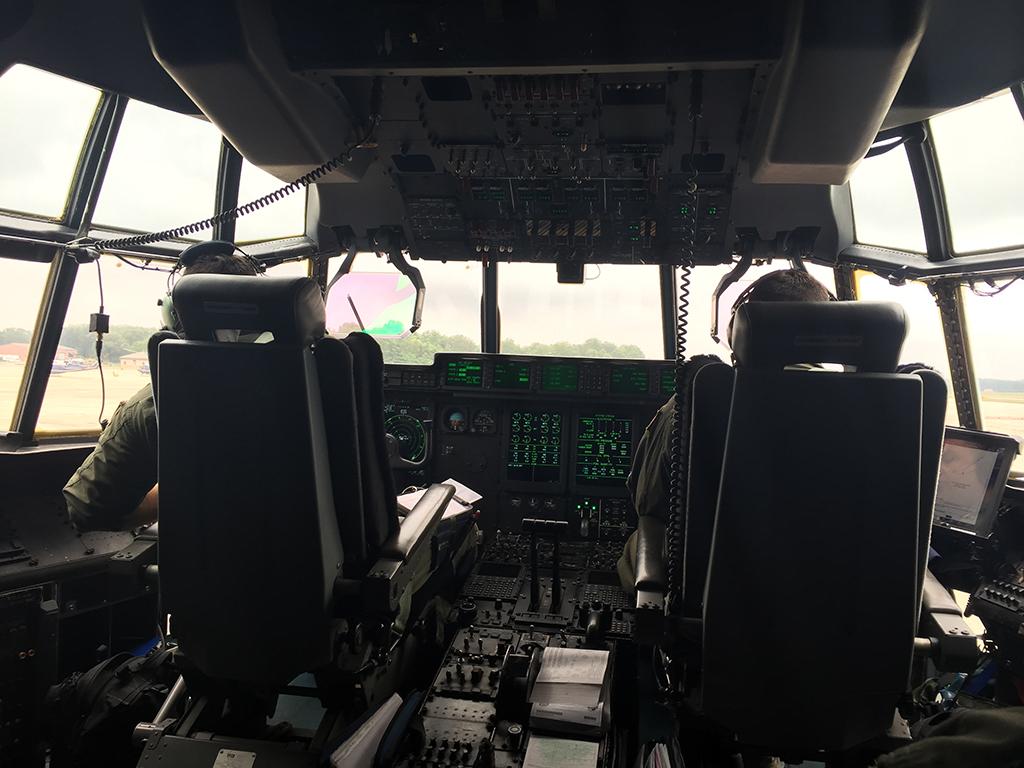 The WC-130J was piloted by Maj. Brad Roundtree and co-pilot Capt. Forrest Heintz, with support from navigator Maj. John Gharbi. The crew describes a mission into a hurricane as flying through a car wash on a roller coaster. The intensity of the storms varies, but when not specifically tasked by the National Hurricane Center, the crew avoids potentially hazardous weather conditions, per normal operating procedures.

On June 28, the crew deviated from its planned path to avoid a storm gathering along the Maryland coast. The J-model C-130 took off and landed smoothly and without incident. No turbulence was experienced. 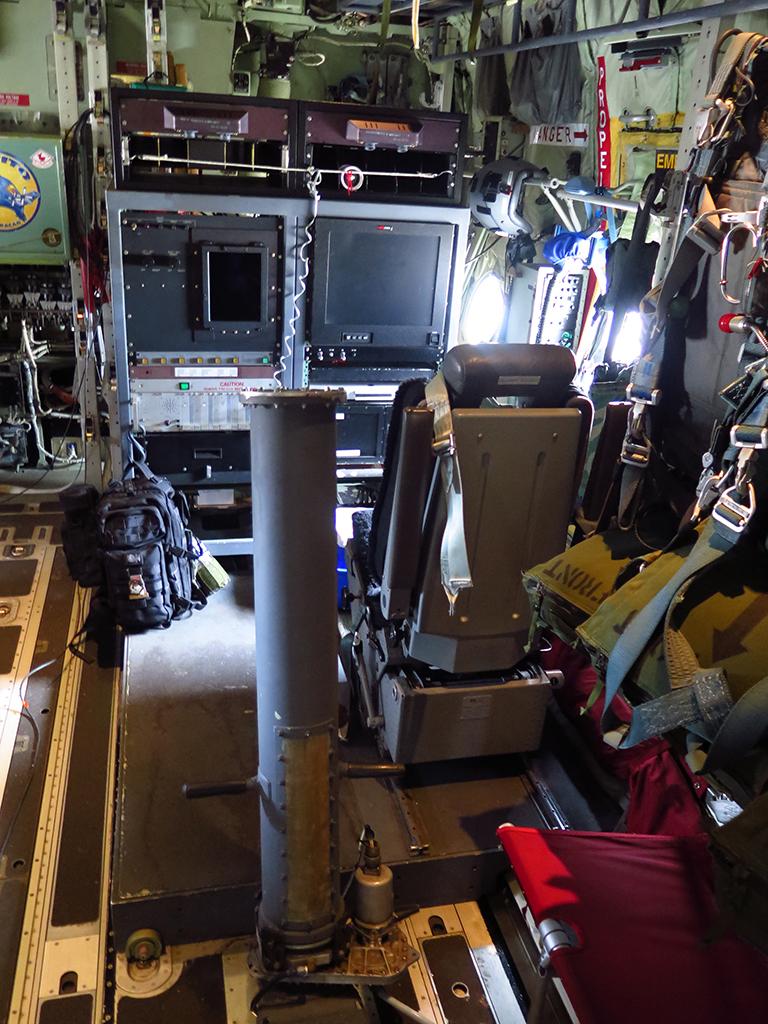 Weather data equipment takes up two pallet positions in the cargo bay of the WC-130J, and the dropsonde capsules are deployed through a pneumatic tube-launch system mounted to the floor. Weather Officer Maj. Kyle Larson gathers data streaming from the stepped-frequency microwave radiometer en route to the objective area and receives information from the dropsonde as it descends through the atmosphere. That information is transmitted to the National Hurricane Center via satellite link every 15-20 min. Staff Sgt. Jesse Jordan, the aircraft’s loadmaster, sets and shoots the dropsonde. 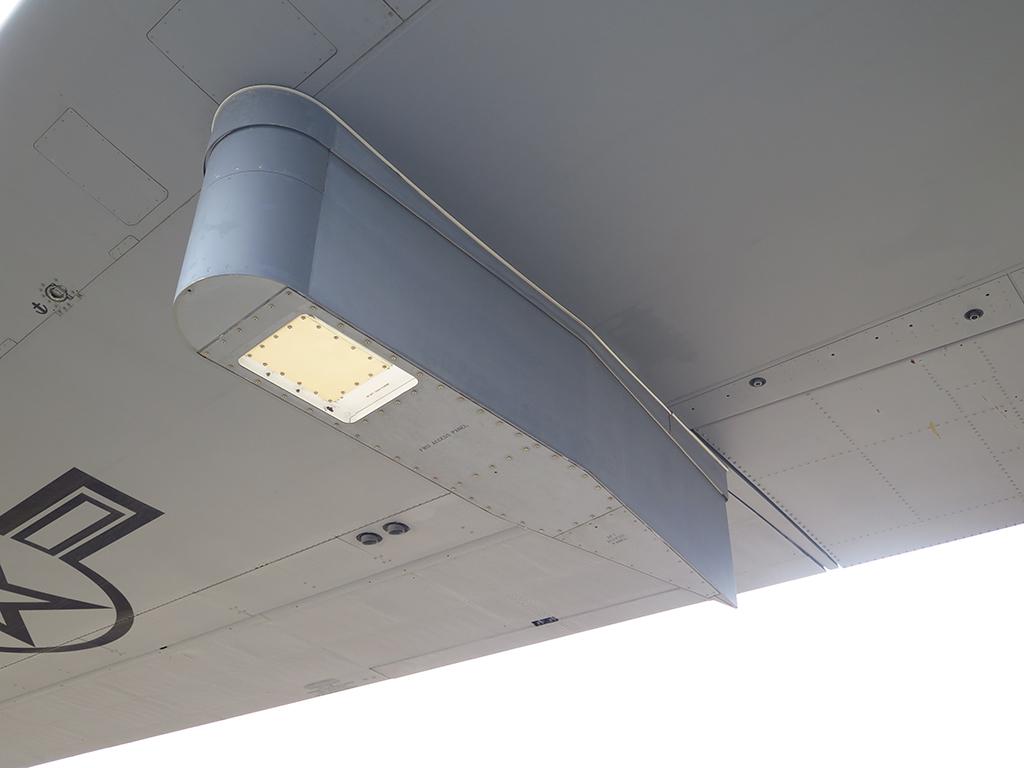 This wing-mounted stepped-frequency microwave radiometer allows the Weatherbirds to constantly measure wind and rainfall as the aircraft flies through hurricanes. The resulting data is augmented with information coming from the dropsonde. This particular sensor was installed on the WC-130J fleet in 2007. 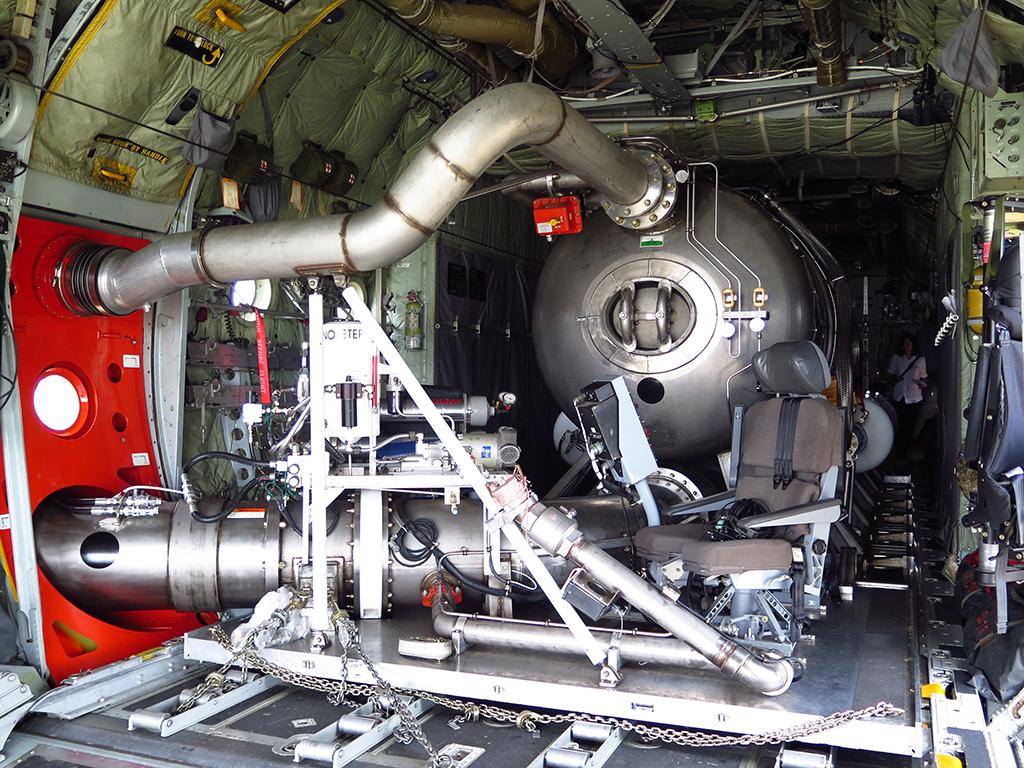 The Forest Service owns eight MAFFS aircraft, which are divided among three Air National Guard units and the one Air Force Reserve component squadron, the 302nd Airlift Wing. That reserve unit is assigned MAFFS Modules 2 and 5. 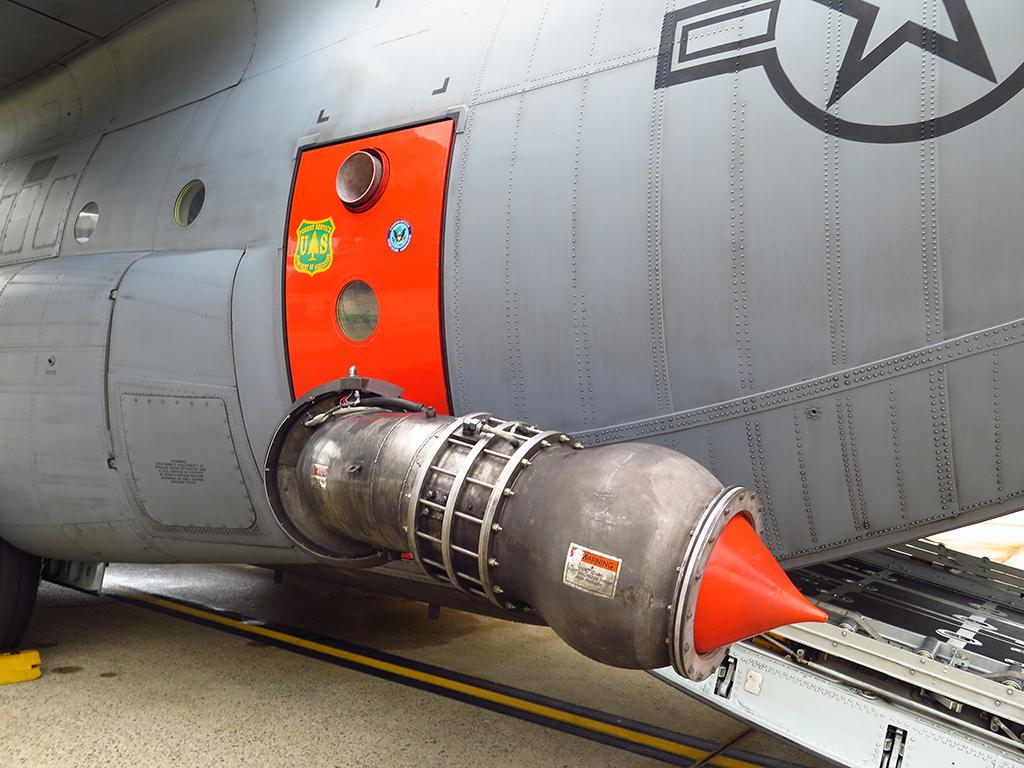 MAFFS can be installed on the C-130H within a few hours as a roll-on/roll-off capability. Its two electric generators pressurize the 3,000-gal. fire retardant, or “slurry,” tank to 12,000 psi. Flying in low and slow, the crews can eject the entire volume within 4 sec. 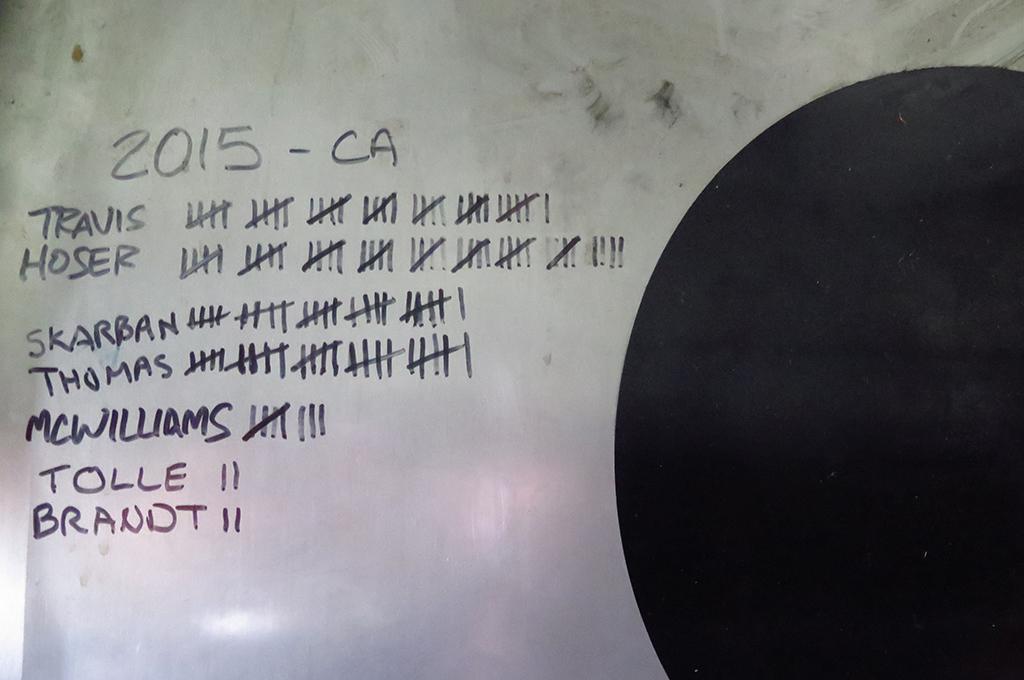 The aircrews of the MAFFS-equipped C-130Hs mark the tank each time retardant is delivered onto a fire. The tank inside Aircraft 47320 has markings from as far back as the particularly devastating wildfires of California in 2008. Its 2015 record counts 144 drops. MAFFS flow and spray patterns are regulated by a hydraulically actuated flow valve that sticks out of the side of the aircraft through a modified red paratroop door. 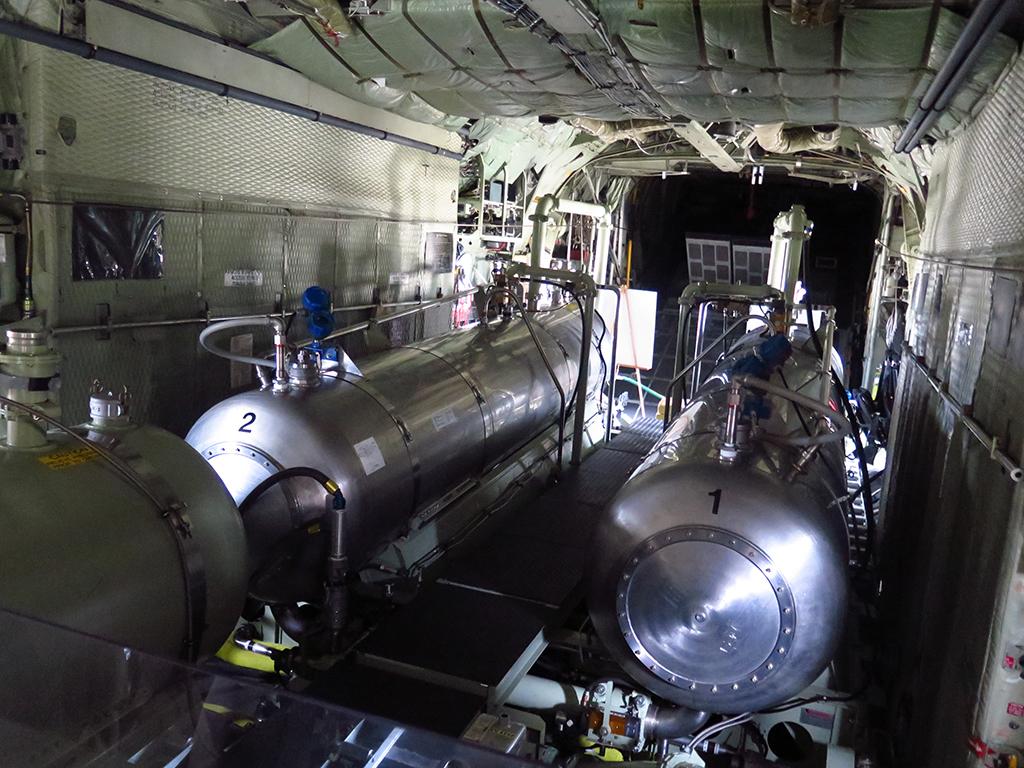 The 910th Airlift Wing’s 757th Airlift Sqdn. operates six H-model C-130Hs equipped with the Modular Aerial Spray System. The spray equipment disperses herbicides, insecticides and oil dispersants through nozzles protruding from the C-130’s paratroop doors or on its wings. The crew fly close to the ground and often at night for maximum impact against mosquitoes, which can spread diseases such as the Zika virus.

The group at Youngstown Air Reserve Station are the Defense Department’s primary fixed-wing means of aerial spraying, a mission that was set up in 1947. The spray system can be rolled off within an hour if the C-130 is needed for other duties or regular airlift deployments.

The capsule was launched at the mouth of Chesapeake Bay, near Norfolk, Virginia. Departing at 11:45 a.m. local time, the WC-130J climbed to 13,000 ft. heading south along the Potomac River, after deconflicting with local operations of the Bell UH-1N Hueys assigned to the Air Force’s 1st Helicopter Sqdn. The mission is summed up by one airman as “earth, wind and fire,” because its C-130s often double as airlifters and special-purpose aircraft assigned to weather reconnaissance, aerial firefighting and spraying duties.

The WC-130J on hand, Tail No. 85307, is one of 10 Weatherbirds assigned to the tactical airlift wing at Keesler AFB, Mississippi. Reporting to the National Hurricane Center in Miami, the aircrews crisscross the four-engine turboprop through the eyes of tropical storms and hurricanes, reportedly improving the accuracy of weather prediction models by 20-30%. The WC-130J was joined at Andrews by an AFRC C-130H aerial firefighter from Peterson AFB, Colorado, and an aerial spraying aircraft from Youngstown Air Force Reserve Station, Ohio.​

Editor's note: This gallery was updated to correct the name of a WC-130J loadmaster.