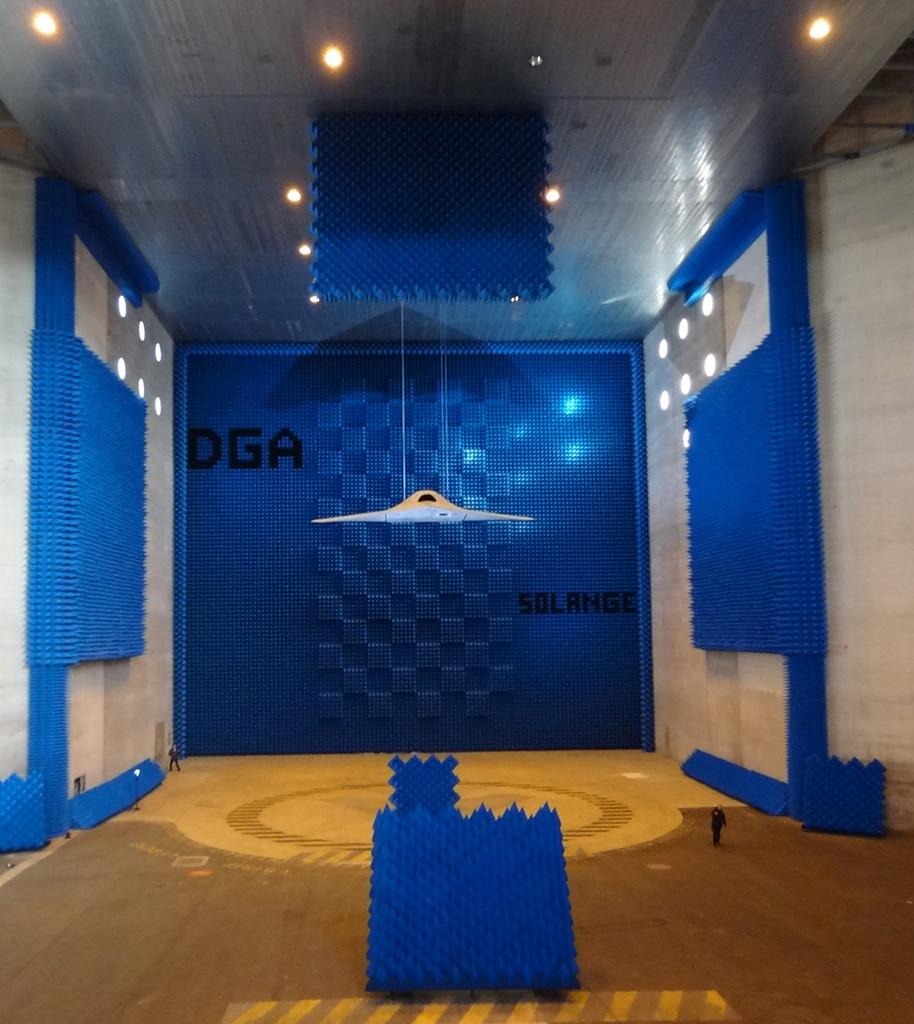 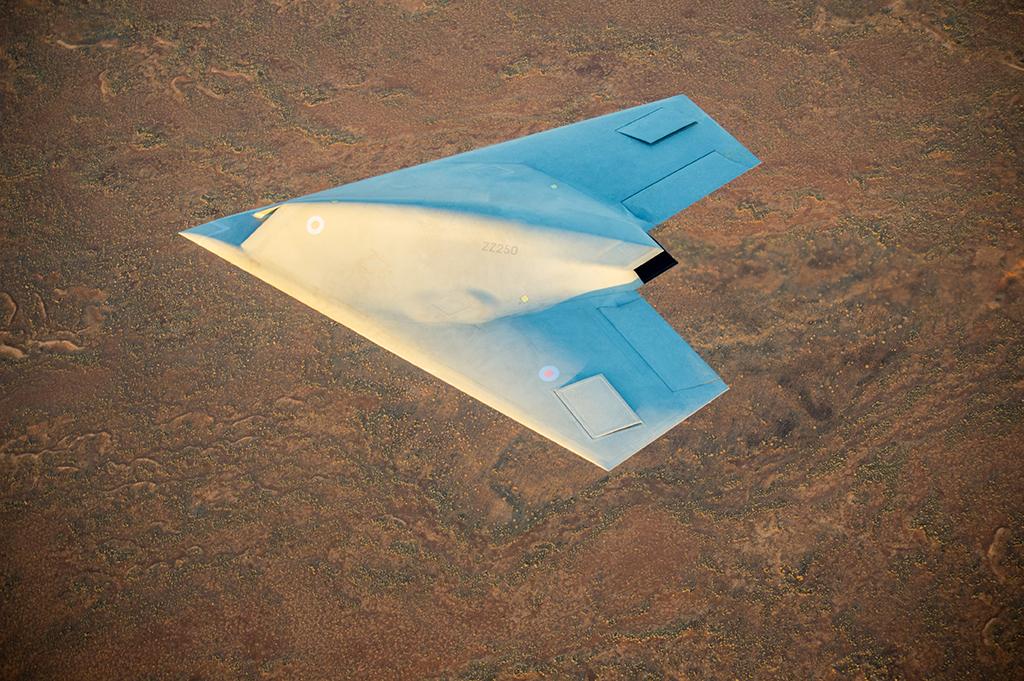 Denys Overholser summed up the “four principles of stealth design—shape, shape, shape and materials.” Almost all stealthy configurations comprise upper and lower elements that meet at a sharp “waterline” that continues around all the aircraft, because rounded edges result in strong glints over a wide range of elevation angles. Some  reflection from sharp edges is managed by placing the outside edges, as well as door and aperture edges, along the smallest possible number of common alignments. When the radar beam is at 90 deg. to the edge, energy will be reflected back—but this will be a transient phenomenon as the aircraft moves. The flightpath can be optimized to reduce such detection opportunities: an important innovation in the F-117 program was the use of a flight-planning computer, nicknamed Elvira, to generate a minimum-detectability “blue-line” track.

Above and below the waterline, the aircraft’s sides are angled away from the vertical. Most shapes use flat “facets” or long-radius spiral curves, or a combination of the two. Aperture edges conform to the primary planform alignments, and long edges may be serrated. BAE’s Taranis (above) is a good example.

Lockheed Skunk Works founder "Kelly" Johnson used the term “flying saucer” to describe one ideal body profile, with sharp edges and continuously curved surfaces that flare outward to a shallow slope toward the edges. This kind of shape is compatible with a blended wing-body (BWB) configuration, as seen in the B-2 and many unmanned combat air vehicle designs. Because BWBs are tailless, they also counter the problem of detection by VHF radars. 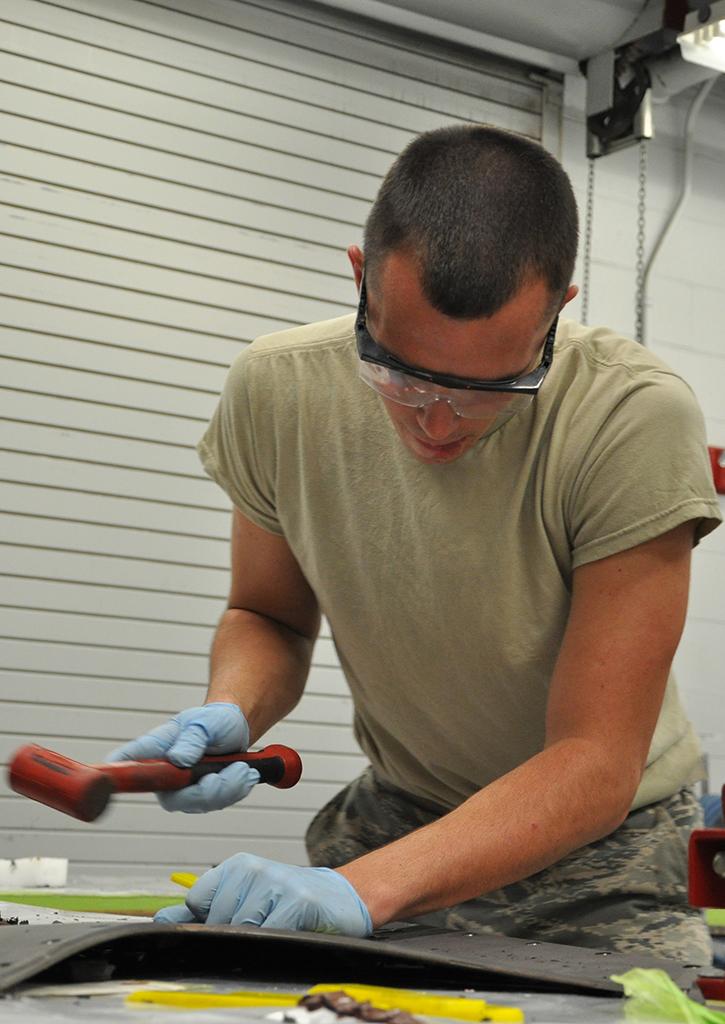 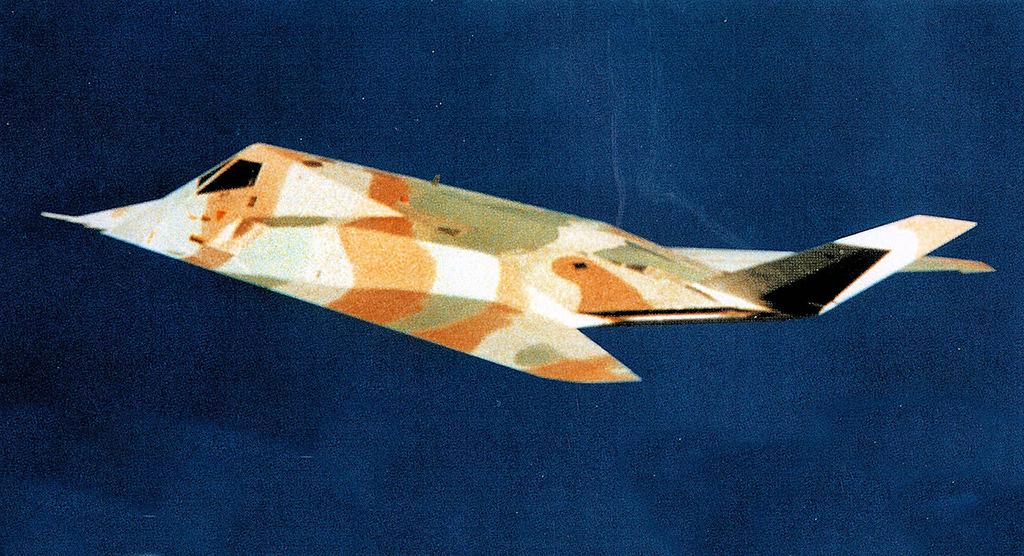 Fitting The Pieces Together

From the signature team’s viewpoint, the ideal stealth aircraft would have no engine, cockpit, sensors, communications or weapons bays, because all these things involve breaking or disrupting the electromagnetic “bubble” around the skin.

Most stealth aircraft have serpentine, RAM-lined inlet ducts that curve to block any line of sight to the engine face. However, aerodynamic considerations set a limit on how tightly the duct can turn, so serpentine ducts can be awkwardly long. Subsonic aircraft with non-afterburning engines can have curved exhaust ducts, at a price in cooling, complexity and weight (like the B-2, illustrated above).

All weapons and fuel have to be carried internally. This may seem more efficient than external carriage, and for a subsonic, low-g aircraft, it often is. It is less of an advantage for a supersonic fighter: external fuel tanks increase drag on the way to the target, but do not have to be stressed to 9g and an 8,000-hr. life, and the clean aircraft with its tanks punched is lighter and slimmer than one with empty tanks. Installing weapon bays, with large cutouts in the structure, is complex: the F-22, T-50 and J-20 each have four separate weapon bays.

Thimble data link and electronic-warfare radomes? Blade antennas? Electro-optical turrets? All equally proscribed. Apertures have to be built into RAM-lined cavities and covered with flush windows that block all radiation except in their operating wavelength. This adds weight and bulk, and also limits each antenna’s field of view—a nonstealthy fighter can have spherical RF coverage with two antennas, but a stealth design needs six. 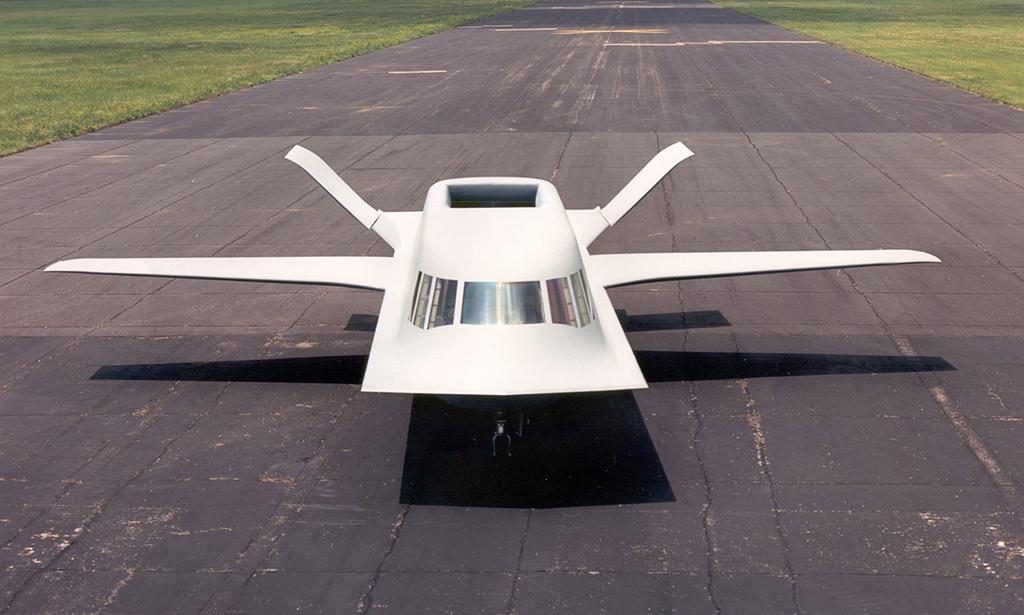 One of the first challenges to stealth was to prove that it could be used on an offensive aircraft, since it seemed that radar and communications were inherently nonstealthy. Low probability of intercept (LPI) radar technology was part of the answer, demonstrated on the Northrop Tacit Blue stealth prototype (above). LPI techniques include agile waveforms, power management and pseudo-random scanning patterns, and were made much easier to implement with the advent of active, electronically scanned array (AESA) radars: The Advanced Tactical Fighter program that led to the F-22 included AESA from the start. Similar techniques are used for communications, along with pencil-beam data links.

LPI has come under increasing stress with improvements in electronic surveillance measures (ESM), better jamming and RCS-reduction measures applied to conventional fighters. Lower RCS and better jamming mean (other things being equal) that more radar energy is needed to detect, identify and track targets—and modern automated jamming systems based on digital radio-frequency memory and phased-array antennas are immensely better than anything deployed in the 1990s or earlier. On the ESM side, digital receiver technology listens continuously over its entire operating band rather than sweeping through it. 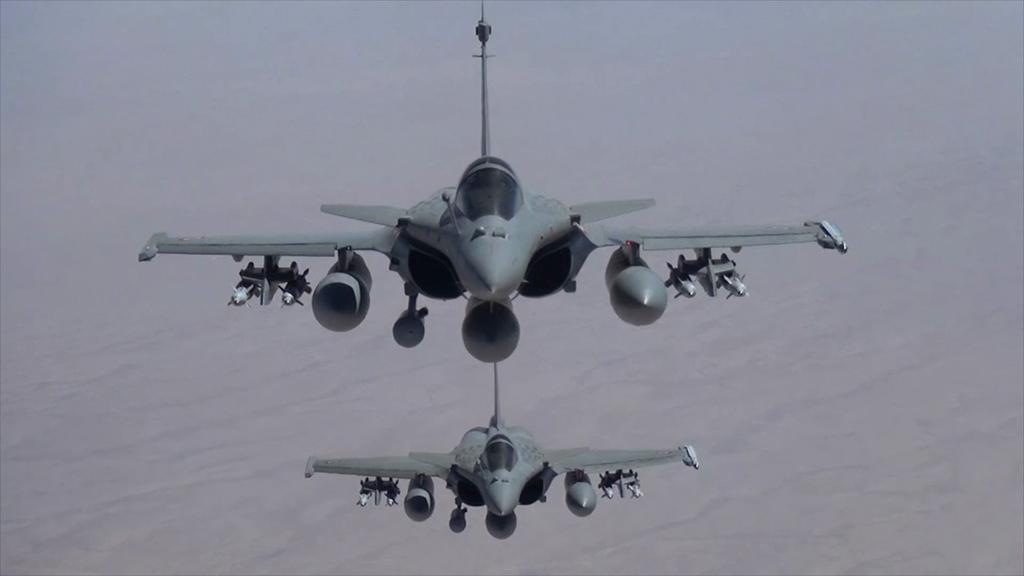 Like any technology, stealth evolves. Although a good deal of effort over the decades has focused on reducing the cost of stealth—acquisition, operations and aircraft performance—there have been performance improvements as well. For example, Northrop Grumman and the U.S. Air Force say that the B-2 is both less maintenance-intensive and stealthier than it was when it entered service. It has been suggested that clean-sheet designs can now be classified as extreme low observables (ELO) as they are stealthier than the B-2 in all respects.

One enhancement to stealth is active cancelation (AC): onboard electronics detect a radar signal, locate the emitter and transmit a signal that exactly matches the echo received by the radar—but exactly half a wavelength out of phase, so that the radar sees nothing. AC has existed in theory for decades, and may have been considered for the B-2. In 1997, a French engineer said in an interview that the Rafale’s Spectra electronic warfare system (above) includes “stealth-jamming modes that make the aircraft invisible” and it was disclosed later that MBDA had tested an “active-stealth” system on a C-22 target UAV in 1999.

Other improvements to stealth survivability may be system-wide. There have been references, for instance, to “stand-in jamming”—if the target has a low RCS, less power is needed to jam a radar, and an effective jammer can be carried on a small, semi-expendable platform. 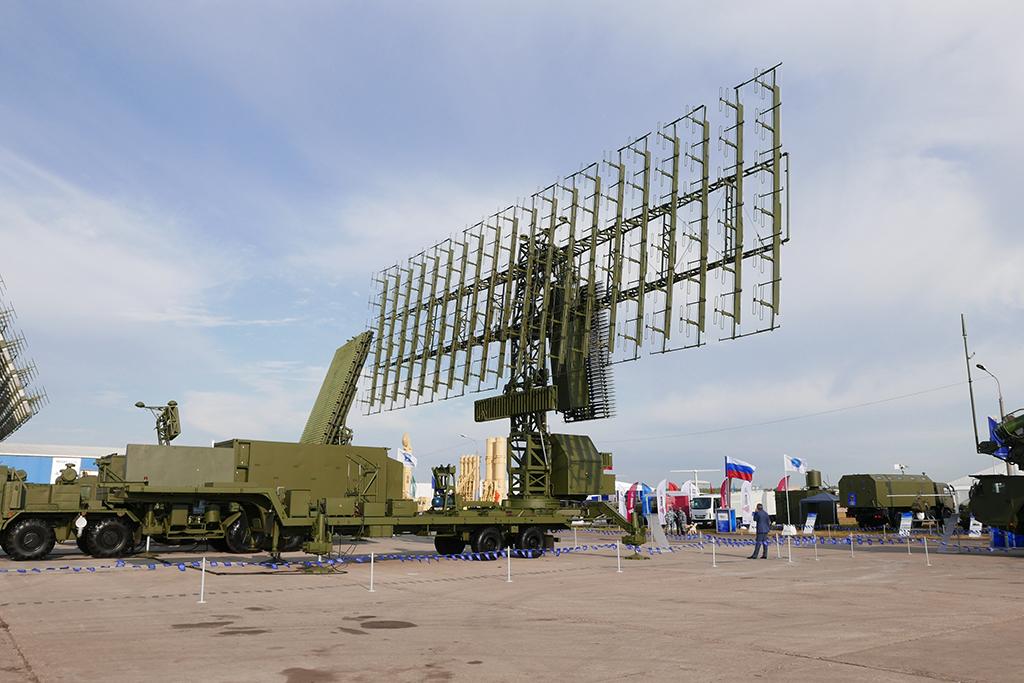 VHF radars can detect some stealth aircraft. The Victorian physicist Lord Rayleigh gave his name to the way that electromagnetic radiation is scattered by objects that are smaller than its wavelength. This applies to the particles in the air that scatter sunlight, and airplane stabilizers and wingtips that are about the same meter-class size as VHF waves.

The counter-stealth attributes of VHF were known at the dawn of stealth, in 1983, when the U.S. Air Force’s Lincoln Laboratory ordered a 150-ft.-wide radar to emulate Russia’s P-14 Oborona VHF early warning system, in support of the B-2 and the Quartz UAV project. In tactical air warfare, however, VHF radar’s poor resolution and low scan rate made it of little use.

New VHF AESA radars can scan instantly and randomly over a 120-deg. field of view, and are networked with higher-frequency AESA radars for accurate tracking (as in the Russian NNIIRT 55Zh6UME, above). The cue from the VHF radar allows the higher-frequency systems to focus on the target area, increasing their probability of detection.

Many surveillance radars now offer processing techniques that make it possible to pick weaker tracks out of noise, such as track-before-detect—analyzing signals over time for the tracks of targets too small for normal detection—and multiple-hypothesis tracking.

More radical ideas have been proposed, including a multistatic UHF system, studied in Sweden in 1992-2000, which relied on detecting the shadow behind the target and would use a very large number of inexpensive transmitter-receiver units. The same principle is exploited in the Barrier-R from NNIIRT, deployed since 2005, which creates a low-level “fence” that works regardless of target RCS. Ultra wideband “impulse radar” would in theory defeat any stealth technology but has not been fully developed. 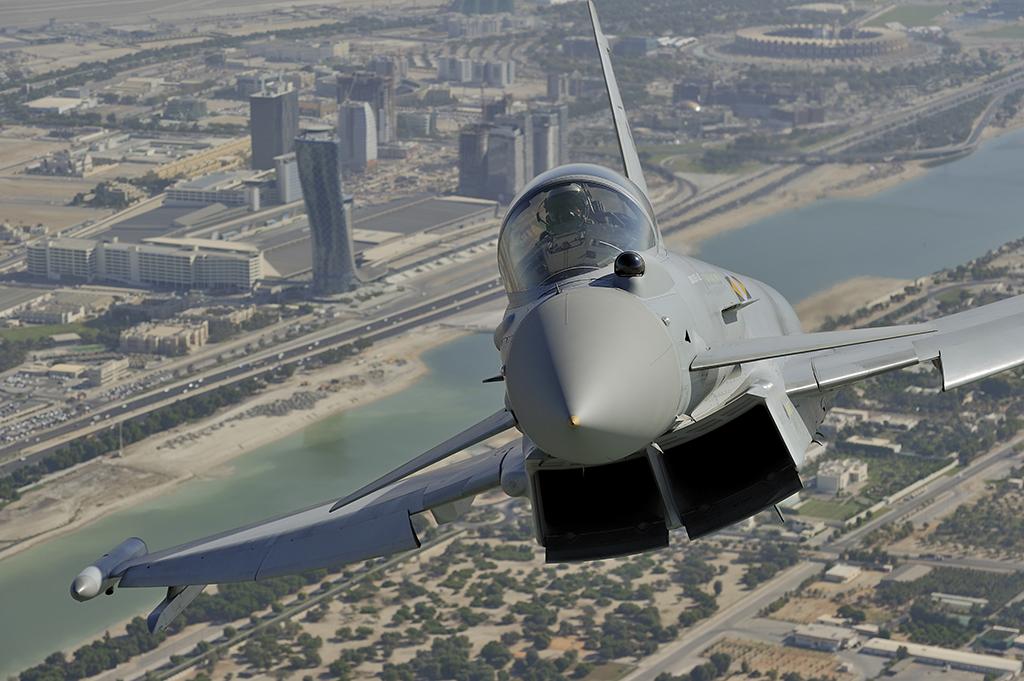 Infrared search-and-track systems were used on many fighter aircraft in the 1950s and early 1960s, but were of limited use: any IRST sensitive enough to detect targets at long range would also pick up noise and clutter, causing false alarms. In the 1980s, however, better IRSTs were developed, mainly to defeat radar jamming. In some cases, they were automatically coupled with the radar via the fire control system. The most important IRST project of the 1990s was the Pirate system for the Typhoon (above), developed by Selex-ES, which combined a high-performance mercury-cadmium-telluride detector with variable-focal-length optics and advanced processing, including neural-net elements. The system uses high-speed, agile mechanical scanning provided by a gimbaled mirror. After long development that focused on analyzing real-world targets, the system was refined to analyze the edges and cores of IR sources, allowing it to reject false targets quickly and reliably.

Stealth is not a single technology, but a group of aligned disciplines. Those disciplines, in turn, need to be brought together in a workable, affordable and practical vehicle.