A Look At Projects Staking A Future On The Moon 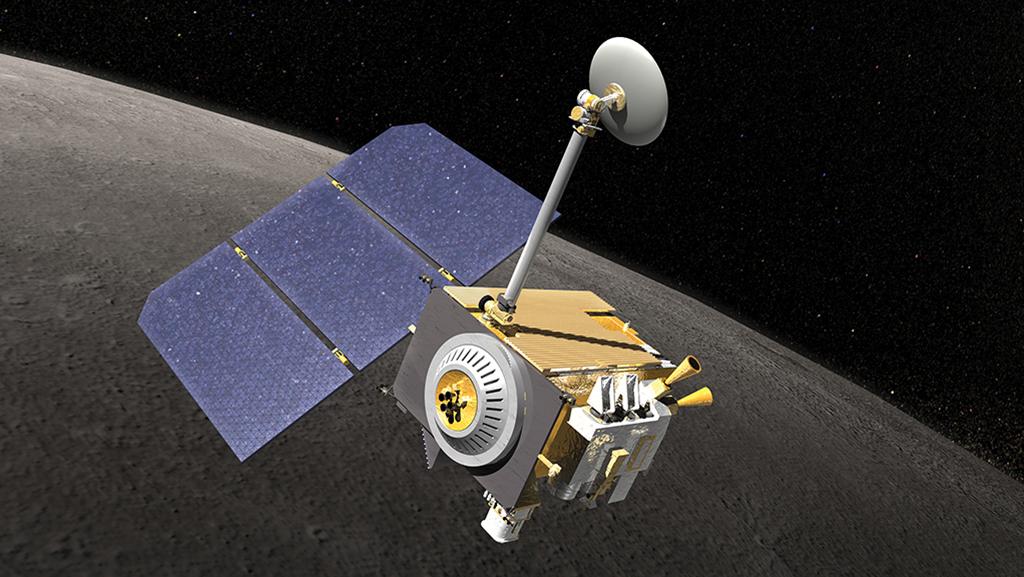 In the waning days of Project Constellation, NASA’s ill-fated, 2005-09 effort to restart human lunar exploration, the agency launched the Lunar Reconnaissance Orbiter (LRO) to collect data for possible future landing sites and scout for resources on the lunar surface. After collecting measurements from the LCross lunar impactor, the LRO began its mapping mission, making the surprising discovery of super-cold temperatures in the permanently shadowed craters of the Moon’s south polar region.

The -397F (-238C) are among the coldest surface temperatures measured in the Solar System, colder than Pluto. The LRO also observed the Apollo landing sites, discovered that the shadowed craters may hold water and hydrogen and found evidence the Moon may be shrinking. In addition, it located the long-lost Soviet Lunokhod 1, missing for almost 40 years, enabling researchers to bounce laser signals off the rover’s retroreflectors and provide new information about the Moon’s position and motion. 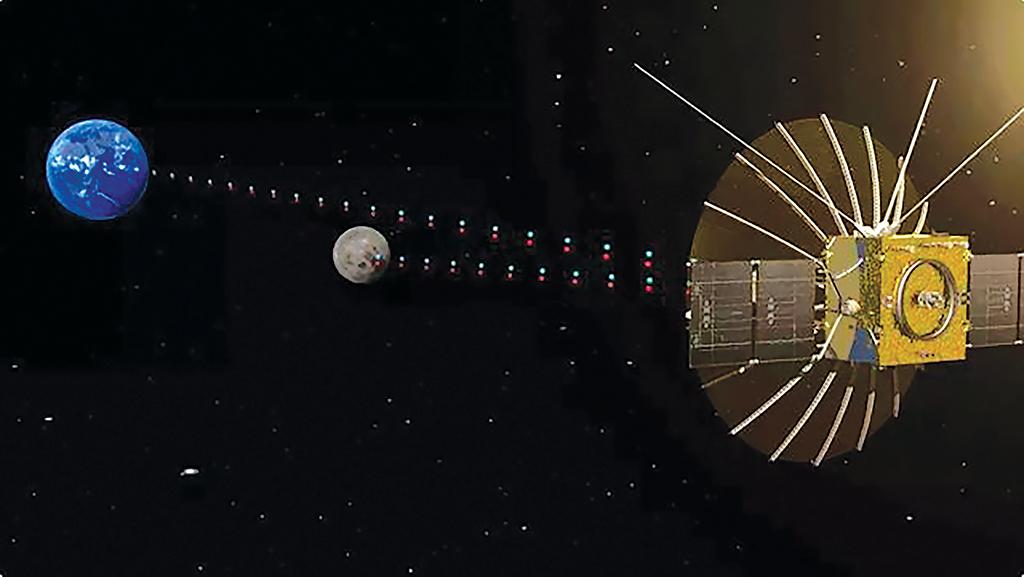 China is poised to become the first nation to directly explore the far side of the Moon, home to what may be a motherlode of indigenous resources in and around the  south pole’s Aitken Basin. To prepare for the arrival of the Chang’e 4 lander and rover, scheduled for late this year, China in May launched the 940-lb. Queqiao communications relay, which is stationed at the gravitationally balanced Earth-Moon Lagrange point L2.

Queqiao is outfitted with a 4.2-m (14-ft.) antenna to receive X-band signals from the lander and rover and relay them to ground stations via S-band. 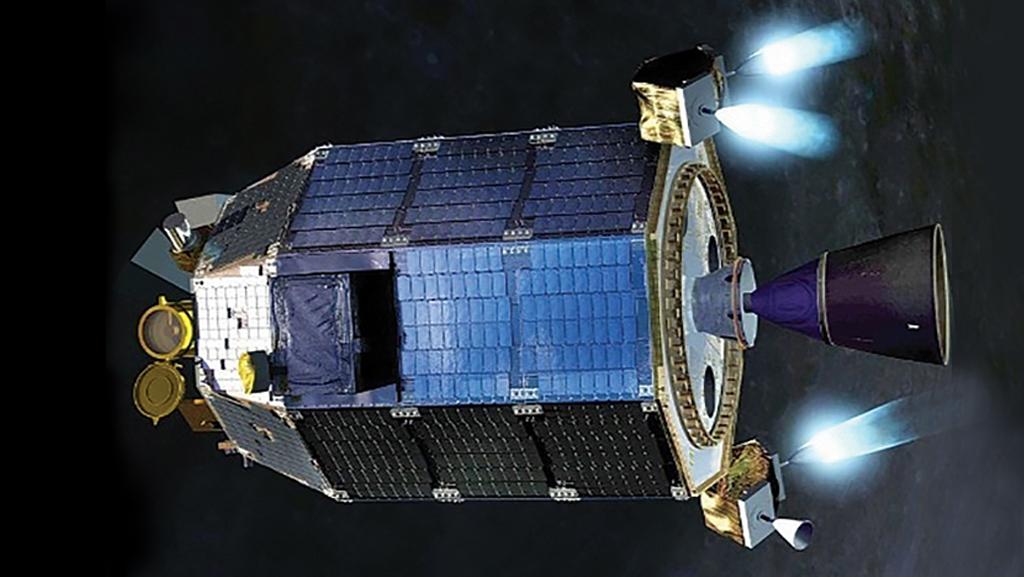 After its successful Chandrayaan mission to the Moon, the Indian Space Research Organization (ISRO) plans an ambitious follow-up comprising a lunar orbiter, lander and six-wheel rover. Scheduled to launch in January 2019, the mission is designed to analyze the Moon’s composition, topography, mineralogy, elemental abundance, lunar exosphere and look for chemical signatures of hydroxyl and water ice. 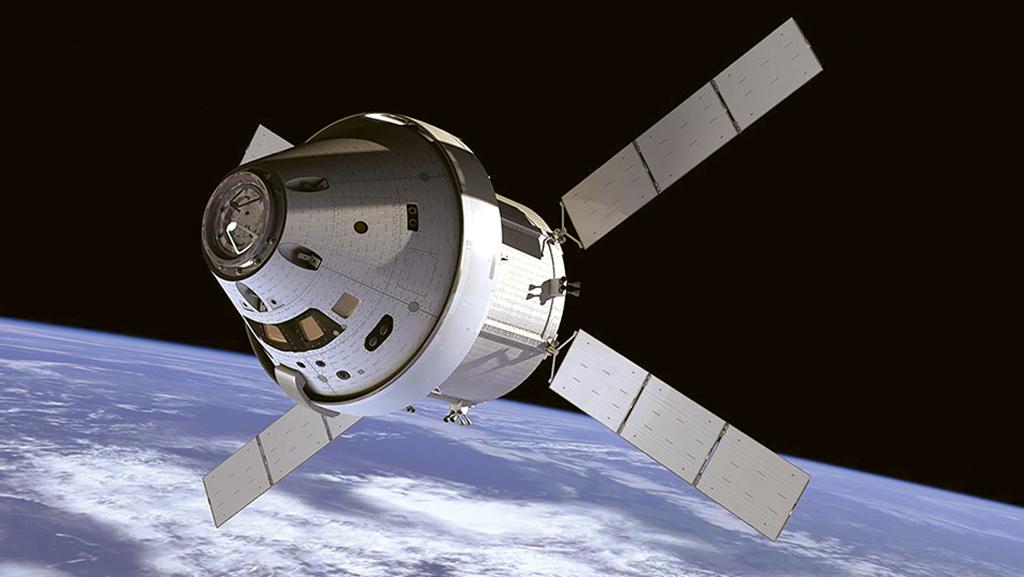 NASA’s long-awaited Exploration Mission-1 (EM-1) will not spend much time around the Moon, and there will not be any astronauts aboard. But the mission, currently scheduled for mid-2020, is expected to pave the way for NASA’s first human forays beyond low Earth orbit since the 1969-72 Apollo program. EM-1 is expected to last about three weeks and will serve as the first integrated flight test of NASA’s heavy-lift Space Launch System rocket, the Orion deep-space capsule and ground support systems. 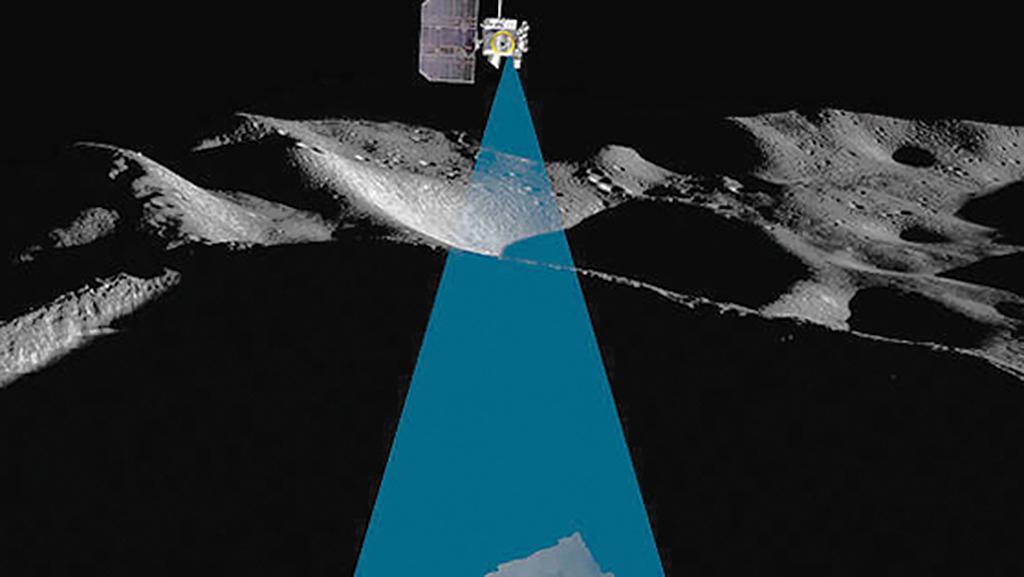 South Korea plans to join the global lunar community with its first deep-space venture, the Korean Pathfinder Lunar Orbiter (KPLO), a 1,100-lb. spacecraft scheduled to launch in 2020. From its 62-mi.- high lunar polar orbit, the KPLO is designed to survey the Moon’s surface and serve as a technology testbed for future deep-space missions.

NASA, a partner in the project, is contributing one of the KPLO’s five science instruments, the ShadowCam, built by Arizona State University and Malin Space Science Systems. It will acquire images of shadowed regions of the Moon using a high-resolution camera, telescope and highly sensitive sensors. 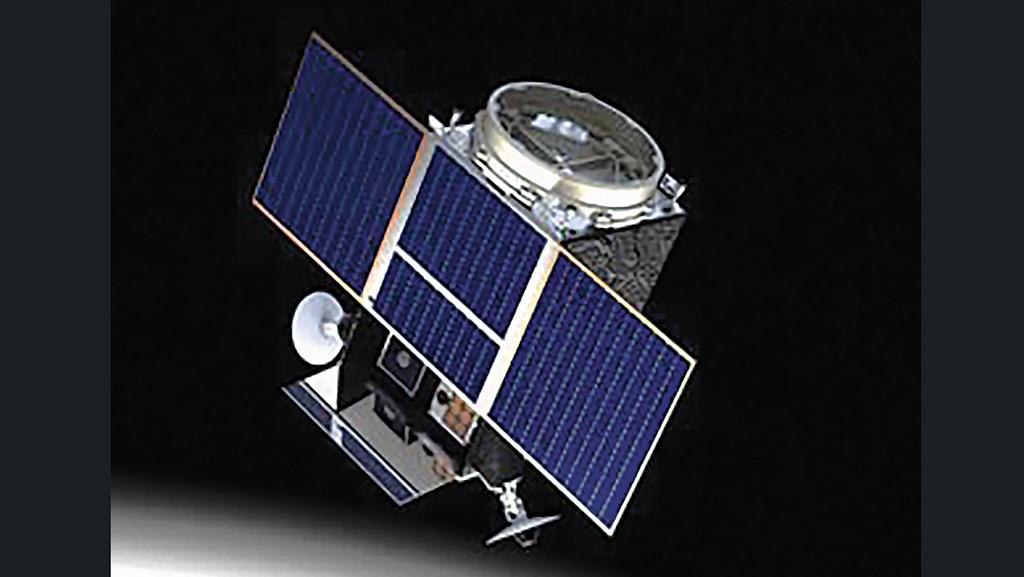 Aiming to serve the expected demand for lunar communications services, Surrey Satellite Technology and Goonhilly Earth Station, both based in the UK, have partnered for a pathfinder mission to the Moon that includes delivery of small payloads into lunar orbit, command-and-control links and payload data services. The cubesat-class spacecraft will communicate via Surrey’s relay satellite in lunar orbit. 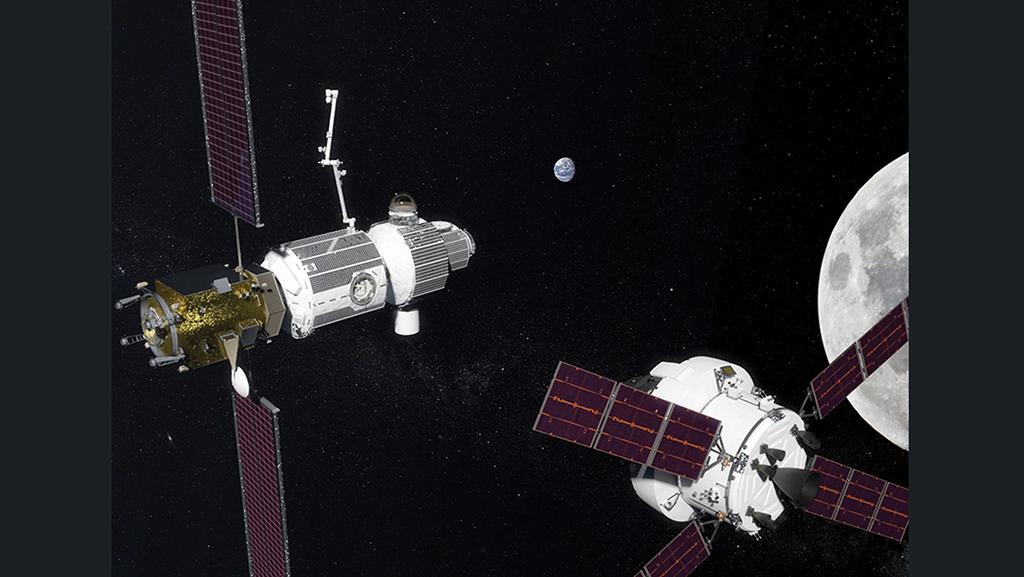 So far, NASA has funding for only two SLS-Orion missions, EM-1 and -2, but the agency is banking on annual flights to build a small spaceport in cislunar space. The Lunar Orbital Platform-Gateway, intended to be occupied part-time by astronauts, will be a research outpost, transportation hub and assembly depot for lunar surface expeditions and eventually a staging point for a shakedown mission for human expeditions to Mars. It will be designed and built in collaboration with international and commercial partners.

As currently envisioned, the gateway would consist of a power and propulsion module, a solicitation for which is underway; a European refueling, communications and airlock module; a small, pressurized utilization module; two habitat modules; an airlock; and one or two logistics modules, one of which will include a robotic arm built by the Canadian Space Agency. 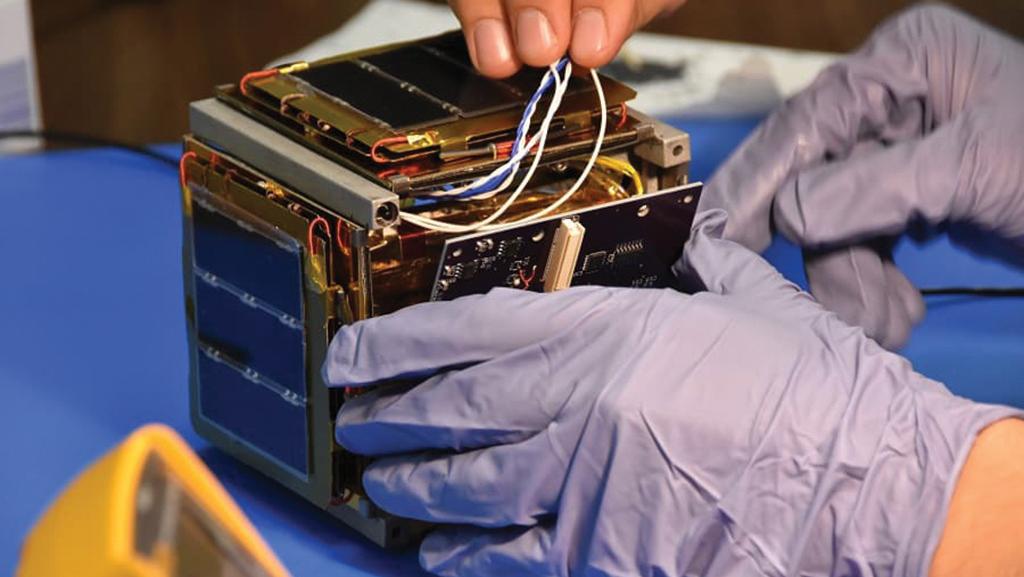 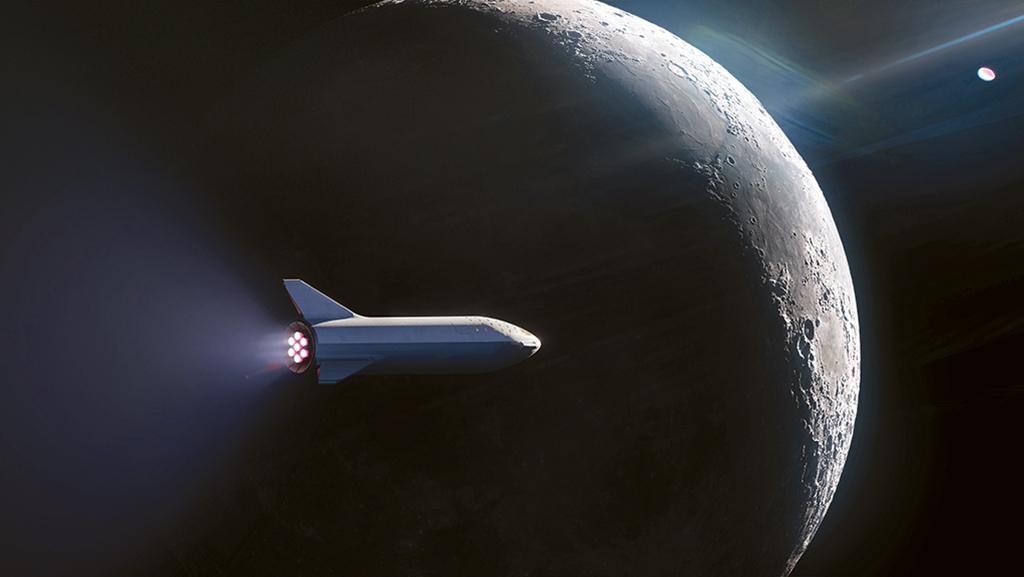 The first manned U.S. spacecraft to swing around the Moon may not be NASA’s Orion. SpaceX is shooting for a 2023 charter BFR flight around the Moon for Japanese entrepreneur Yusaku Maezawa and six to eight invited artist guests. The BFR is a two-stage, fully reusable, heavy-lift launch system SpaceX is designing for crewed missions to Mars. CEO Elon Musk estimates BFR development costs will be around $5 billion. He declined to say how much Maezawa is paying for the BFR junket, expected to last 4-5 days, except that the fee will have “a material effect on paying for the development of BFR.” 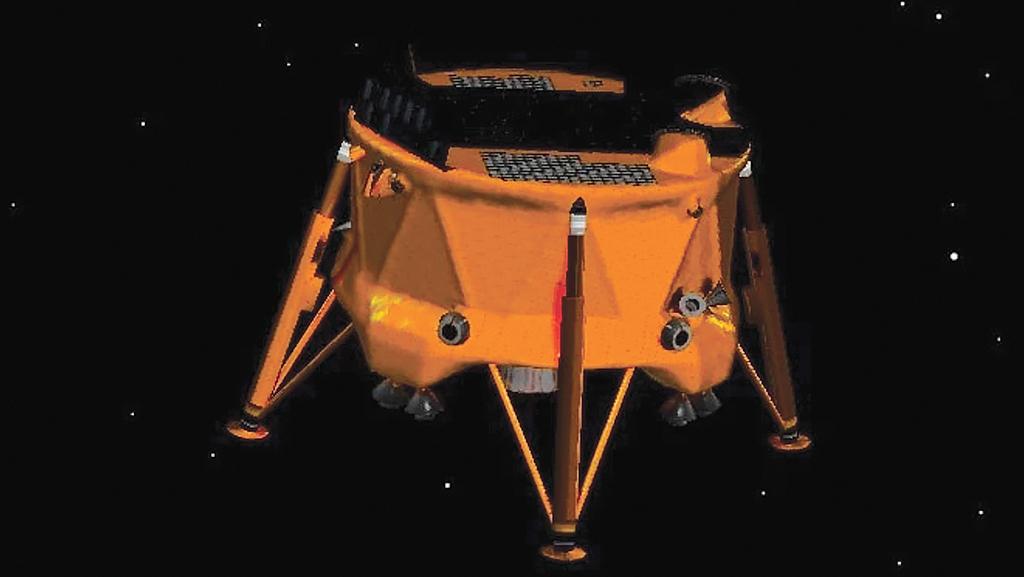 Another GLXP reboot is SpaceIL, which is aiming to land a small spacecraft on the surface of the Moon early next year. Israel Aerospace Industries is building the vehicle for SpaceIL, a nonprofit organization heavily focused on educational outreach. The spacecraft is expected to fly as a secondary payload on a SpaceX Falcon 9. 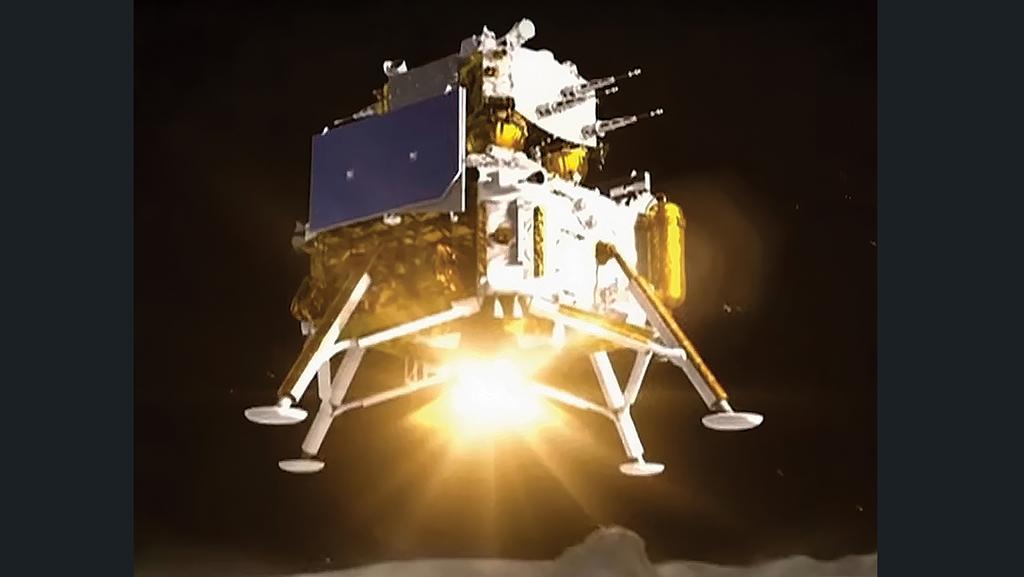 In 2019, the Chinese National Space Administration plans to launch the next project in the Chang’e lunar exploration program, Chang’e 5, a sample-return mission. The goal is to land in the Mons Rumker region, an isolated volcanic formation in the northwest part of the Moon’s near side, and return a 4.4-lb. (2-kg) sample of lunar regolith, possibly from as deep as 2 m. China in 2014 conducted a flight test to validate the design of the sample-return capsule during atmospheric reentry. 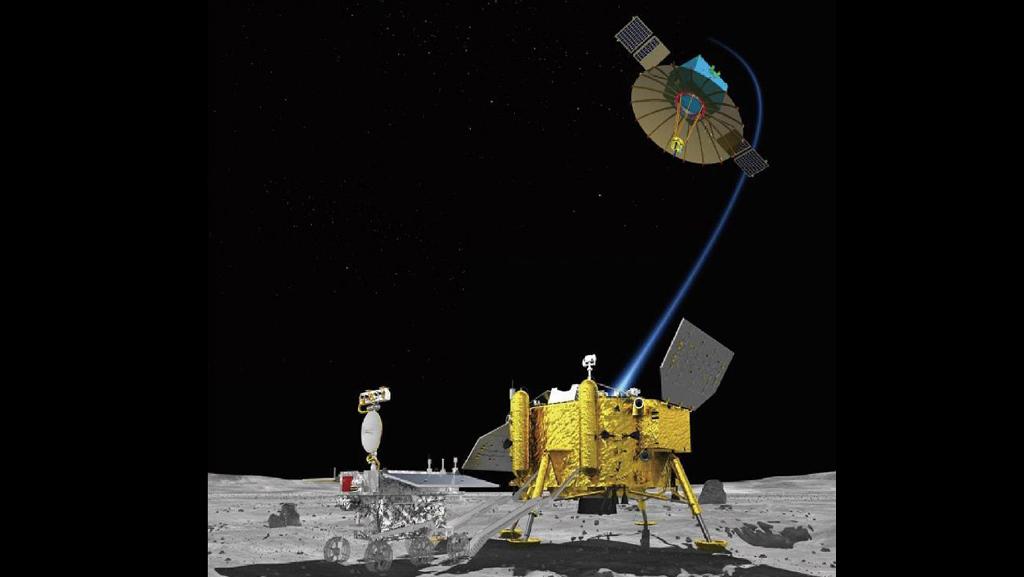 In 2013, China became the third nation to soft-land a spacecraft on the Moon, dispatching the Chang’e 3 lander to Mare Imbrium and deploying a small rover named Yutu. The backup hardware has now been repurposed and is being prepared for launch on a new mission, this time to the lunar far side. The region, which has never been visited, is home to the 1,600-mi.-wide, 5-mi.-deep South Pole-Aitken basin, the oldest lunar crater and one of the largest in the Solar System. It is of scientific interest because the basin floor may contain material from the lunar mantle.

Chang’e 4 looks similar to Chang’e 3, but will be outfitted with different science instruments, 11 in total, including for the first time a low-frequency radio spectrometer. The far side of the Moon is shielded from Earth’s electromagnetic interference, making it an ideal place for unique scientific studies, including measuring auroral radio emissions from the large planets in the Solar System, determining the radio background spectrum at the Earth-Moon L2 points, creating a new low-frequency map of the radio sky and detecting bright pulsars and other fleeting radio emissions.

Like Chang’e 3, Chang’e 4 includes a rover that will carry ground-penetrating radar to detect the near-surface structure of the Moon and an infrared spectrometer to analyze the chemical composition of lunar samples. Chang’e 4’s planned landing site is in Von Karman crater in the northwestern Aitken Basin. Partners in the program include the Netherlands, Sweden and Germany. 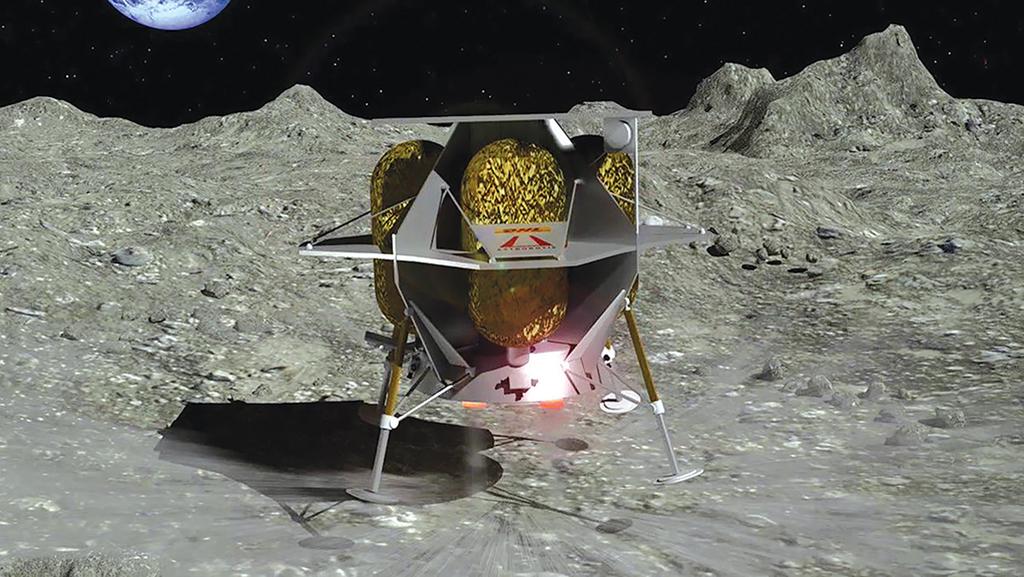 An original contender in the now-defunct Google Lunar X Prize (GLPX), Pittsburgh-based Astrobotic dropped out of the contest early on to focus on building a lunar transportation services company based on a lander, known as Peregrine, capable of putting 77-584 lb. on the surface of the Moon, depending on the choice of launch vehicle and amount of propellant aboard. Eleven customers have been announced so far for Peregrine’s debut flights, expected in 2020. CEO John Thornton is saving space in hopes of flying NASA payloads through the Commercial Lunar Payload Services (CLPS) program. Proposals to provide payload space to NASA on small commercial lunar landers were due Oct. 9. 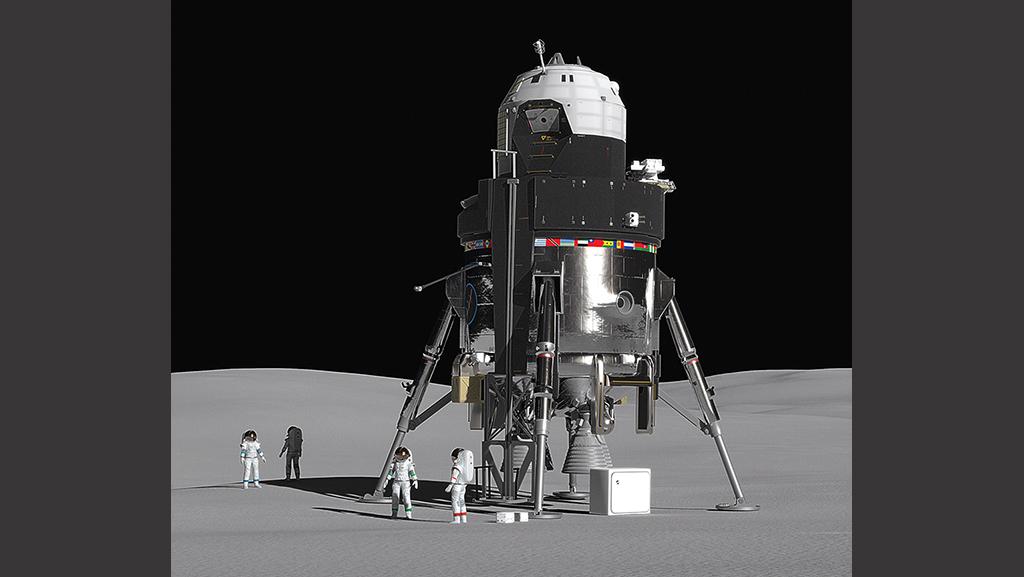 With NASA eyeing eventual human expeditions to the lunar surface, Lockheed Martin in October unveiled another piece of its deep-space architecture for a reusable, single-stage spacecraft capable of ferrying four astronauts between lunar orbit and the surface of the Moon. When fully fueled, the vehicle, which is based on Lockheed’s Orion deep-space capsule, would weigh 68 tons. The Apollo program’s two-person lunar lander, by comparison, weighed 4.7 tons. The vehicle is designed to stay on the lunar surface for up to two weeks at a time before returning to dock at NASA’s Lunar Orbital Platform-Gateway to refuel. 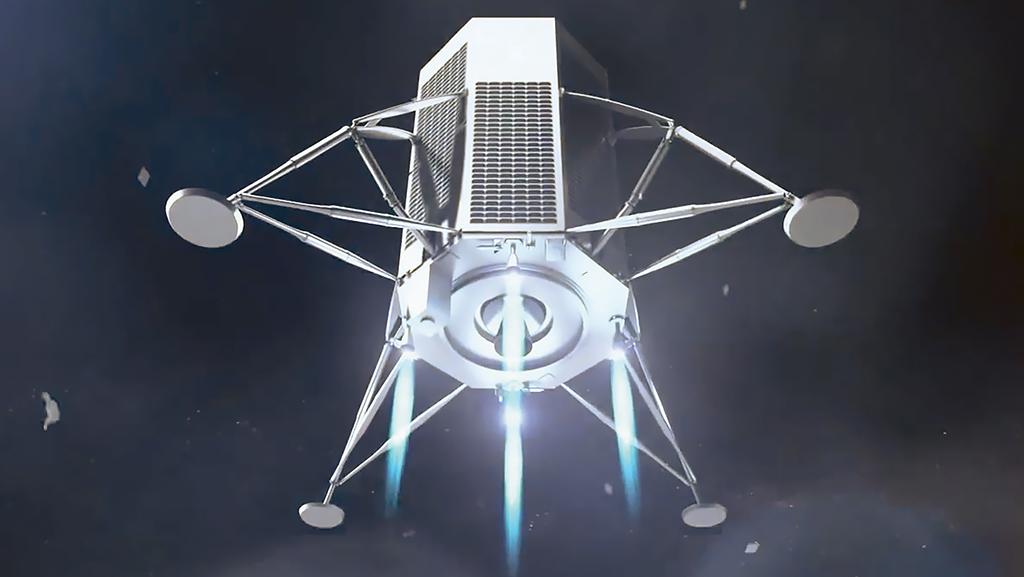 Japanese robotics startup Ispace, a corporate incarnation of GLXP contender Team Hakuto, announced in September launch contracts with SpaceX to fly two lunar missions as secondary payloads. The first mission, scheduled for launch in 2020 would put a spacecraft into lunar orbit, primarily as a technology demonstration. A follow-on mission in 2021 would attempt a soft landing on the Moon and deployment of miniature rovers to gather science data. 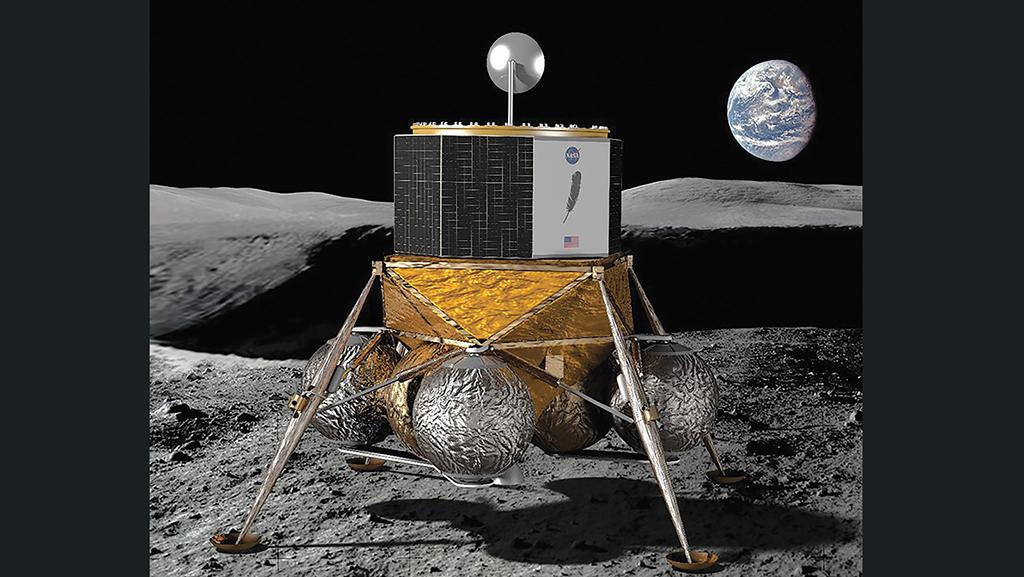 Hoping to take on payload delivery services for NASA and other customers, Jeff Bezos’ Blue Origin last year unveiled plans for a lunar transport capable of placing several tons of cargo on the surface of the Moon. The project, known as Blue Moon, is proposed as a public-private partnership, but Bezos said the company will fund it alone if government support is not forthcoming. Blue Moon is designed to fly on NASA’s Space Launch System heavy-lift rocket but also could be launched on an Atlas V or even Blue Origin’s New Glenn, a reusable booster expected to debut in 2021. 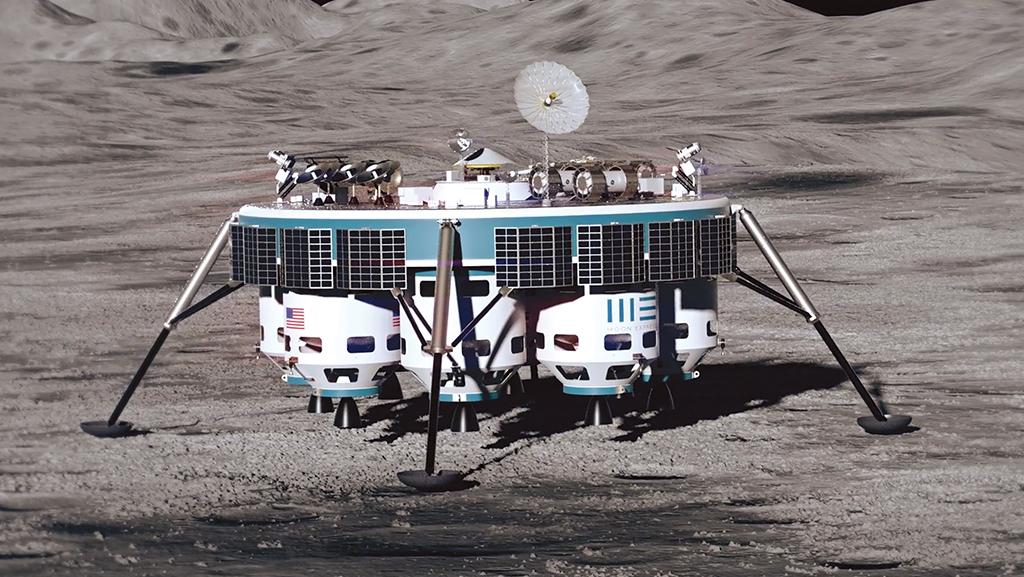 Another GLPX contender was Cape Canaveral-based Moon Express, which, like Astrobotic, is focused on building a business to provide commercial transportation services to the Moon. Originally scheduled to fly in 2018 aboard a Rocket Lab Electron booster, Moon Express is now targeting to fly in mid-2020. It has not yet announced a launch vehicle. The company is developing Space Launch Complex 17 at Cape Canaveral AFS to serve as a spacecraft development and test center.

In 2016, Jan Woerner, director general of the European Space Agency, outlined a vision for “Moon Village,” a community of lunar explorers, scientists, commercial entities, research organizations, educational institutes and other organizations interested in developing the Moon as an eighth continent of Earth.

Moon Village was meant to be an organic, unstructured entity, taking shape as technologies, interests and funding allow. At the time, NASA was more focused on a mission to an asteroid, and while it did not eschew lunar exploration, the U.S. considered the Moon little more than a stopping point on the way to Mars.

Two years later, more than two dozen public and private organizations have unveiled lunar exploration and development programs, and NASA is now front and center among them. Here is a look at some of the projects staking a future on the Moon.