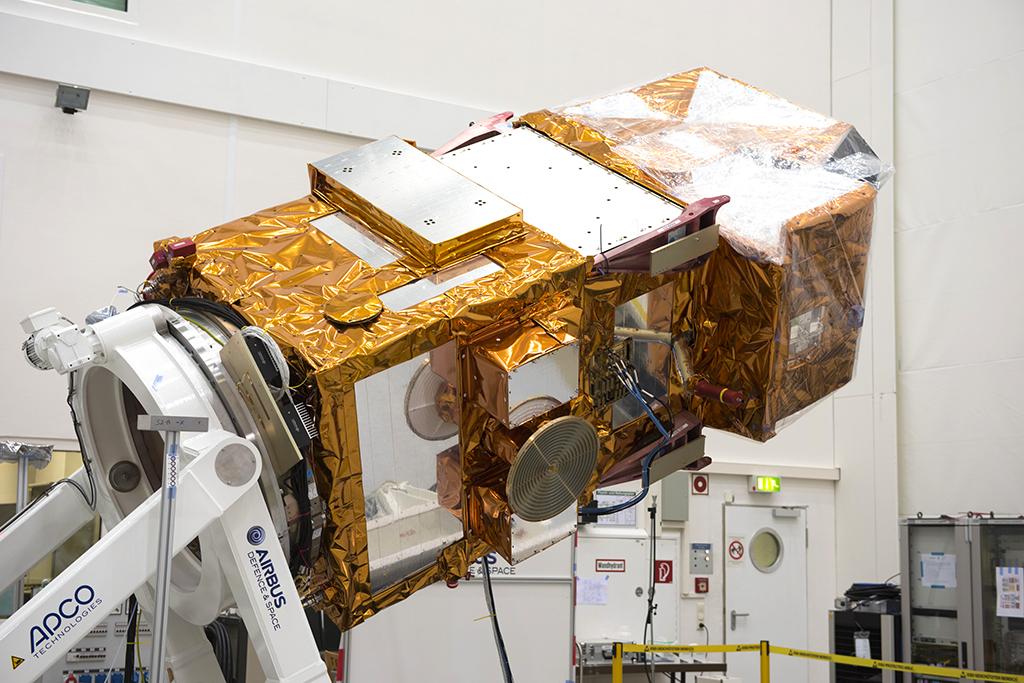 Sentinel-2A is the second in a fleet of European satellites designed to deliver a wealth of data and imagery under Europe’s new Copernicus environmental monitoring and security program. It was fully integrated at IABG's facilities. 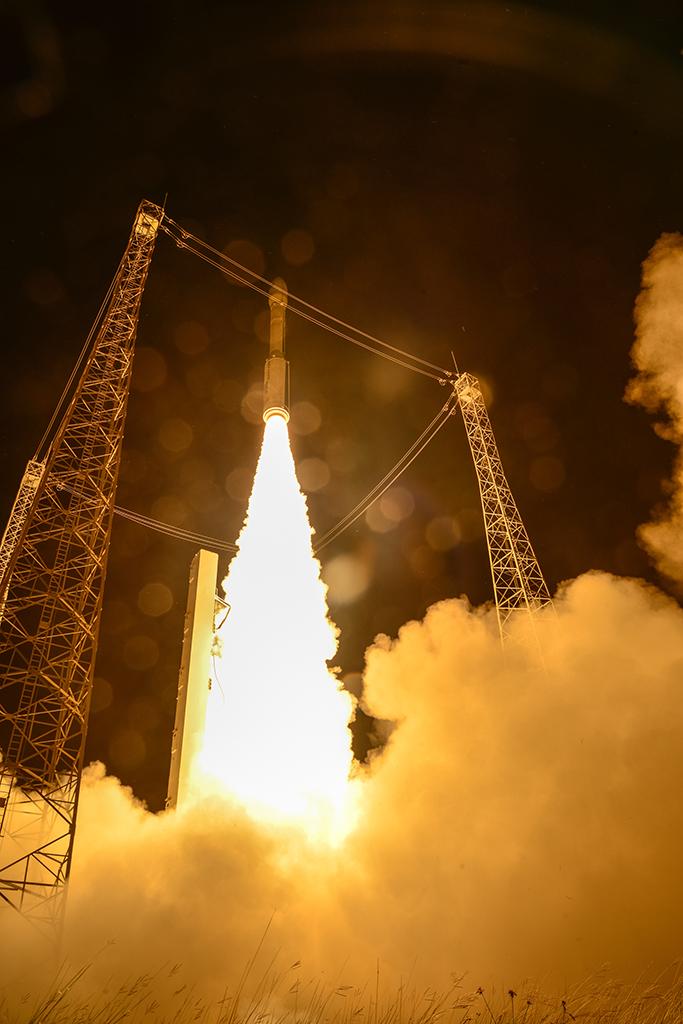 Since launching June 23 atop a Vega light launcher from Kourou, French Guiana, Sentinel-2A has been operating in a three-month commissioning phase to calibrate its multispectral imager. But ESA, which built and launched the spacecraft with industrial partner Airbus Defense and Space, says the initial images from Sentinel-2A’s first scan of Earth have already exceeded expectations. Designed as a two-satellite mission, Sentinel-2A will provide optical imagery on a five-day revisit cycle once its twin, Sentinel-2B, is launched next year. 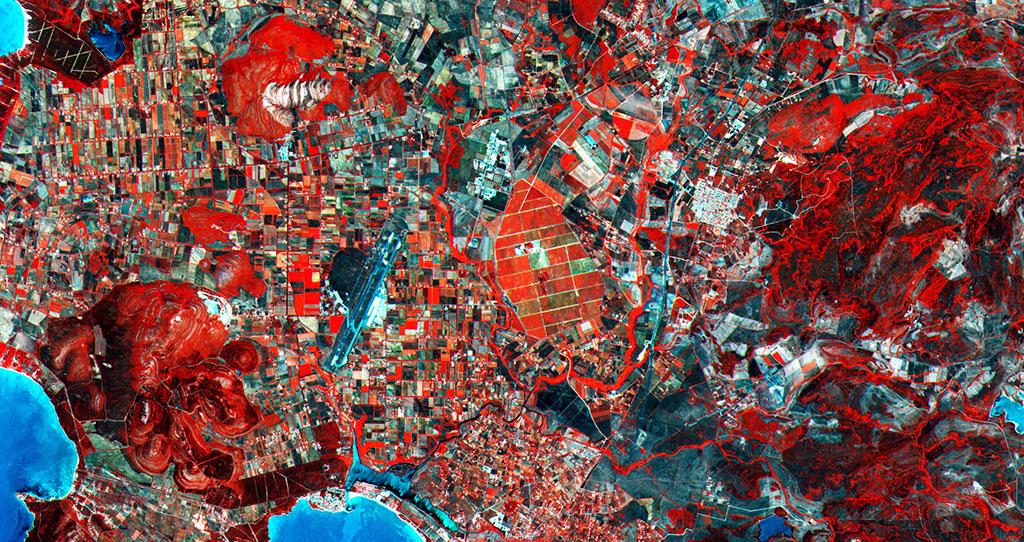 The Sentinel-2 mission carries a wide-swath high-resolution imager with 13 spectral bands that can acquire optical data from the visible and near-infrared (IR) to the shortwave IR at different spatial resolutions, taking land monitoring to an unprecedented level. Sentinel-2 is the first optical Earth-observation mission of its kind to include three bands in the “red edge” to provide key information on the state of vegetation. The area pictured covers a section of the Italian island of Sardinia’s northwestern Sassari province, with parts of the coast visible along the left side and bottom. Agricultural fields dominate the inland, with a large area of vineyards at the center of the image. 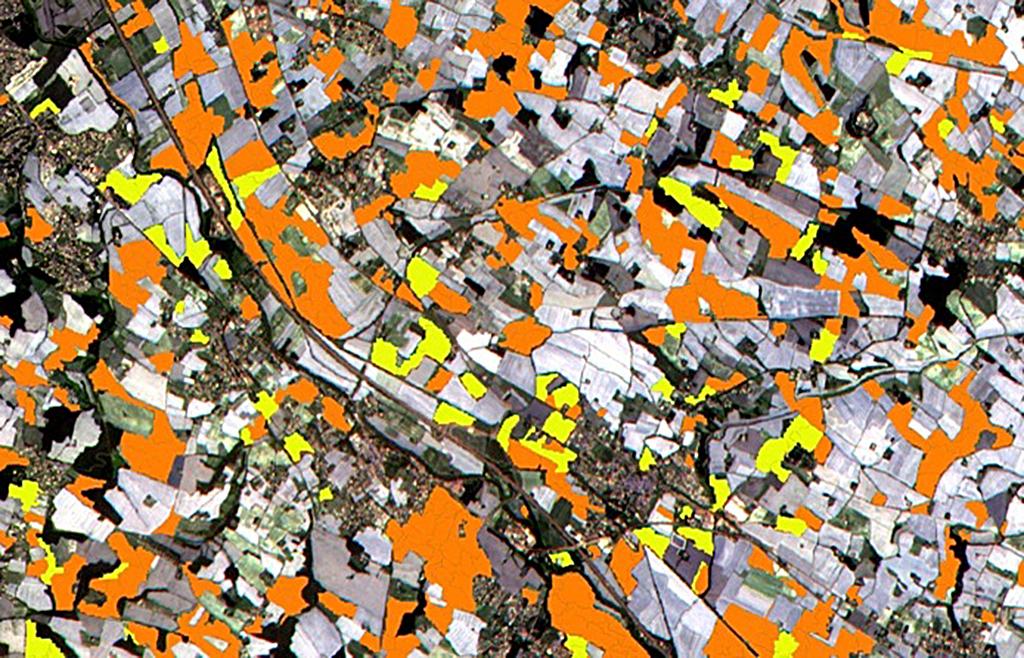 Sentinel-2A, which can image the globe precisely down to the size of a single tree, can map the Earth regularly and deliver images over long periods of time. The satellite can see where a forest is cut and how this affects habitats, and it can distinguish between a healthy tree and a dead one due to its IR footprint.  It can also sense the difference between a lush meadow and a dry one, or between rich and poor crop yield. In this image, the instrument was able to discriminate between two types of crops: sunflower (in orange) and maize (in yellow).

This image from Sentinel-2A shows how Saudi Arabia’s desert is being used for agriculture. The circles come from a central-pivot irrigation system, where a long water pipe rotates around a well at the center. 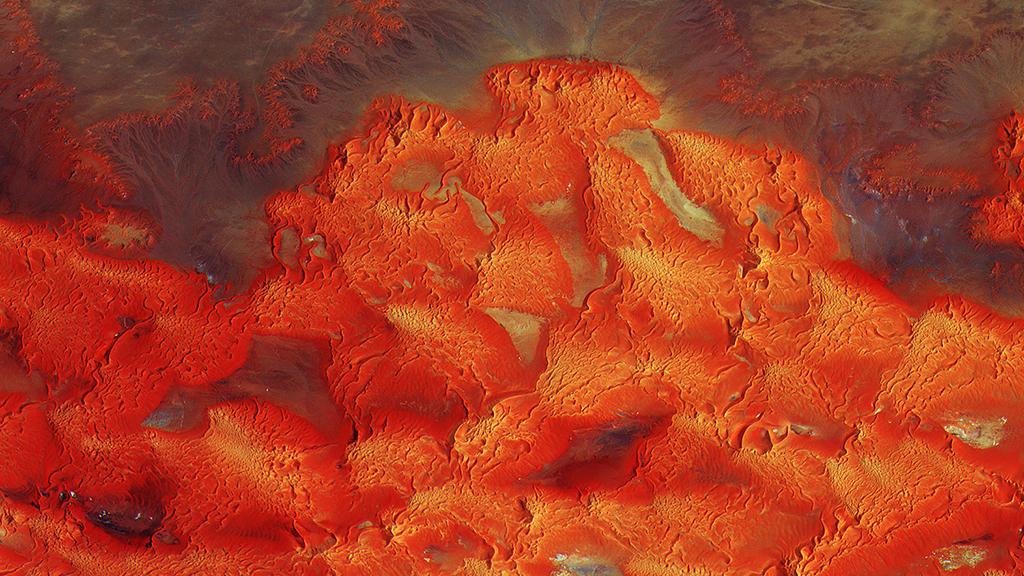 With a swath width of 290 km (180 mi.) and resolution of 10 meters (33 ft.) per pixel, Sentinel-2A snapped this stunning image showing the sea and sand dunes of the Libyan desert, a harsh environment largely devoid of human habitation. 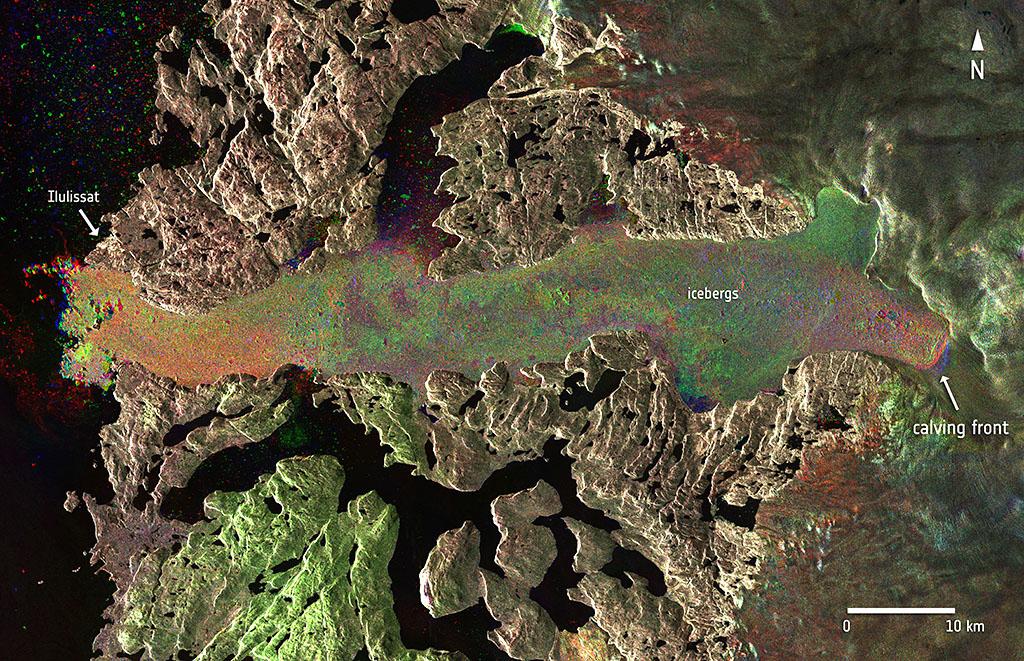 Sentinel-2A is the second satellite launched under Europe’s Copernicus program, following the Sentinel-1A radar satellite built by Thales Alenia Space and launched in 2014. In this radar image captured by Sentinel-1A, the Jakobshavn glacier in western Greenland is seen before and after a massive calving event Aug. 14-16, 2015. 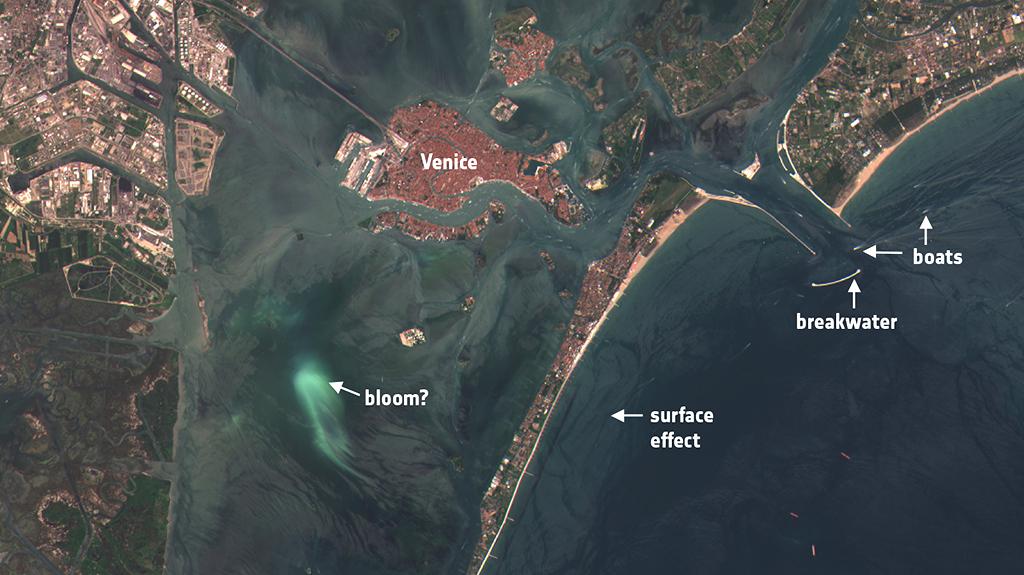 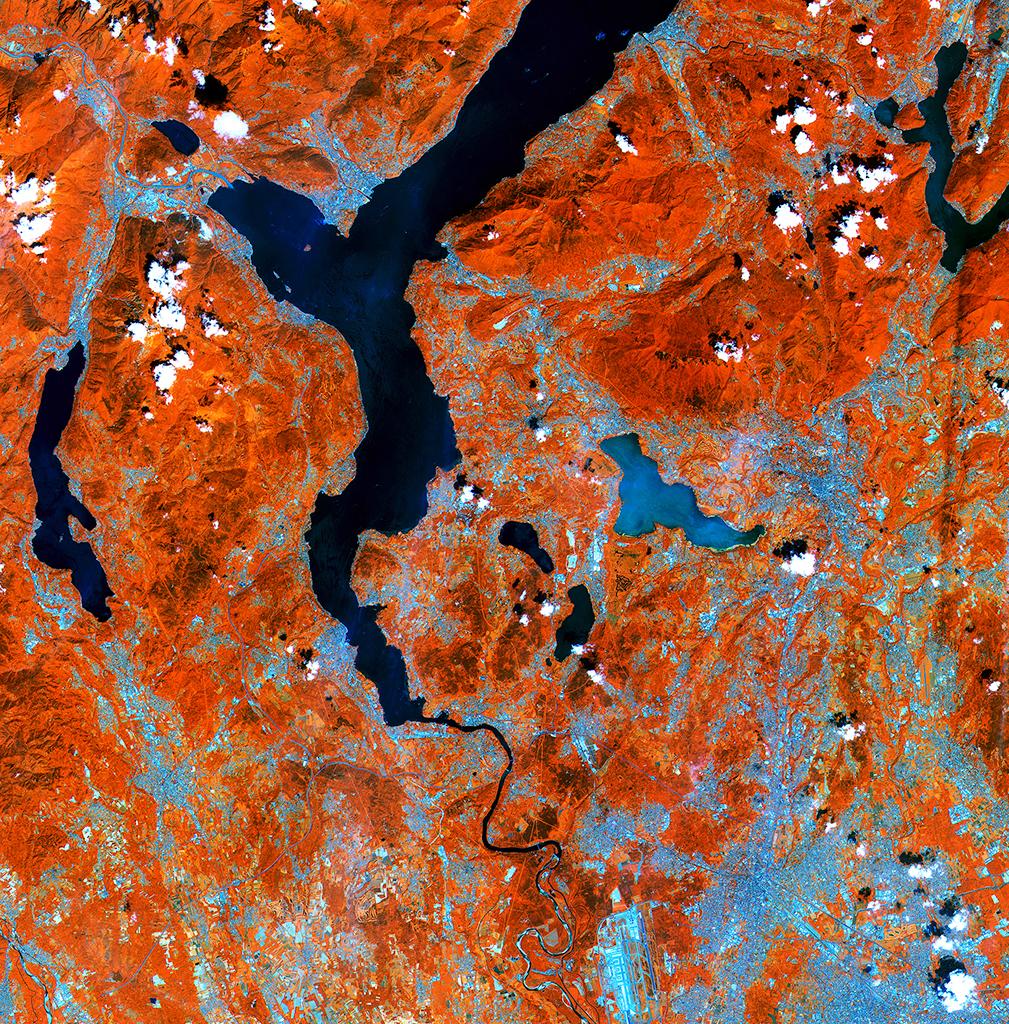 Near the center of the image is the glacial Lake Varese in Italy, appearing lighter blue compared to the other lakes in the image. This demonstrates Sentinel-2A’s ability to measure differences in the conditions of inland water bodies—one of the mission’s main applications, along with land cover, agriculture and forestry. 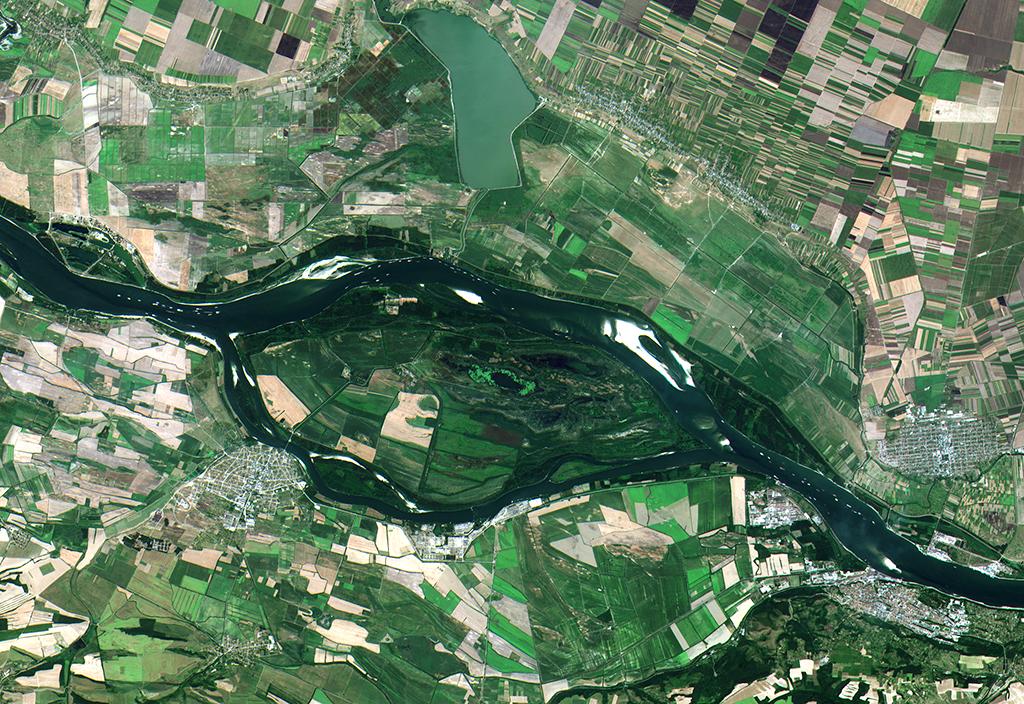 Low water levels in the Danube River have left ships lined up close to the town of Zimnicea, Romania. A heat wave in parts of Europe has dropped water levels in the Danube, triggering traffic problems. In recent weeks, Europe’s first two Sentinel satellites spotted a cluster of ships near the riverbanks, imagery that is being used by the Romanian authorities to monitor navigation at critical points, such as those close to the town. 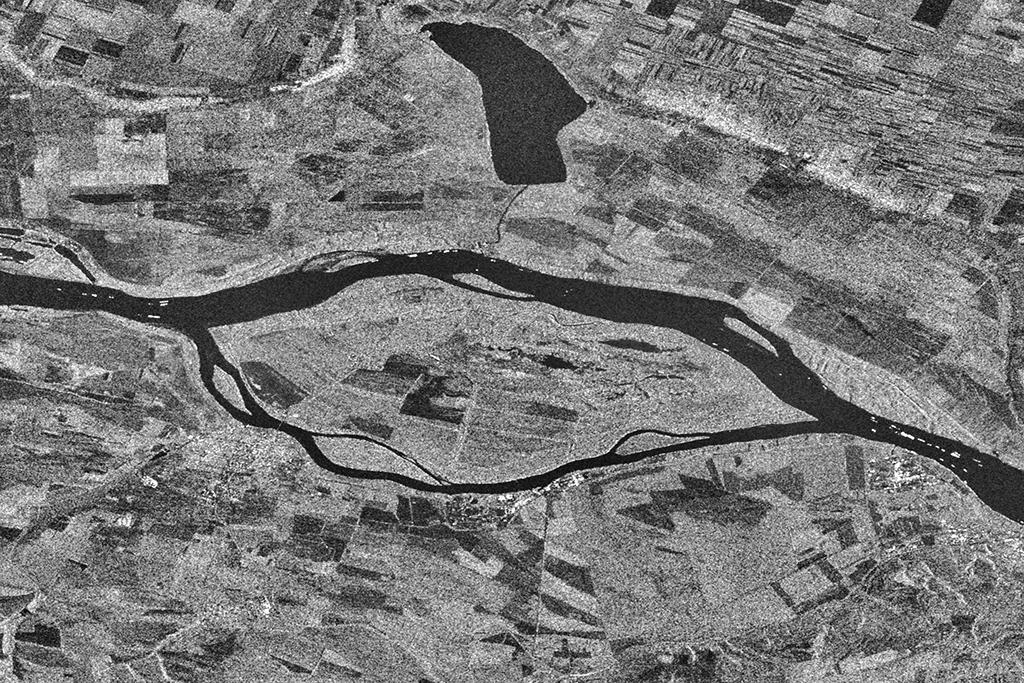 Some 120 ships were stuck, 100 of which were not equipped with an Automatic Identification System, says Ion Nedelcu, director for environment and security projects at the Romanian Space Agency. “The main goal was to identify the ships that do not carry it, and this is where the Sentinel images have proven to be extremely useful,” he says.

Sentinel-2A is just one of about a dozen spacecraft that will contribute to the multibillion-dollar flagship Copernicus mission led by the European Commission, with management support from the European Space Agency (ESA).