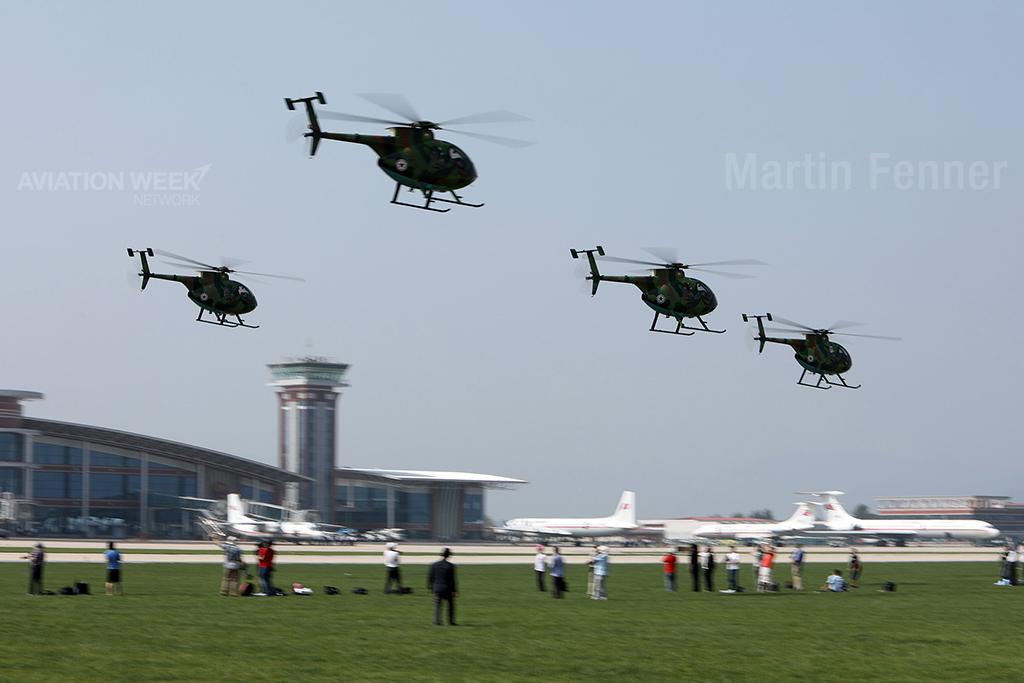 Four KPAAF MD500 light helicopters fly over Kalma Airport, which has been rebuilt from an old airbase and features a new modern terminal and 3,500-m (11,500-ft.) runway. As well as demonstrations from military aircraft, the show also featured model-flying, parachuting and flyovers by aircraft operated by the national carrier, Air Koryo. 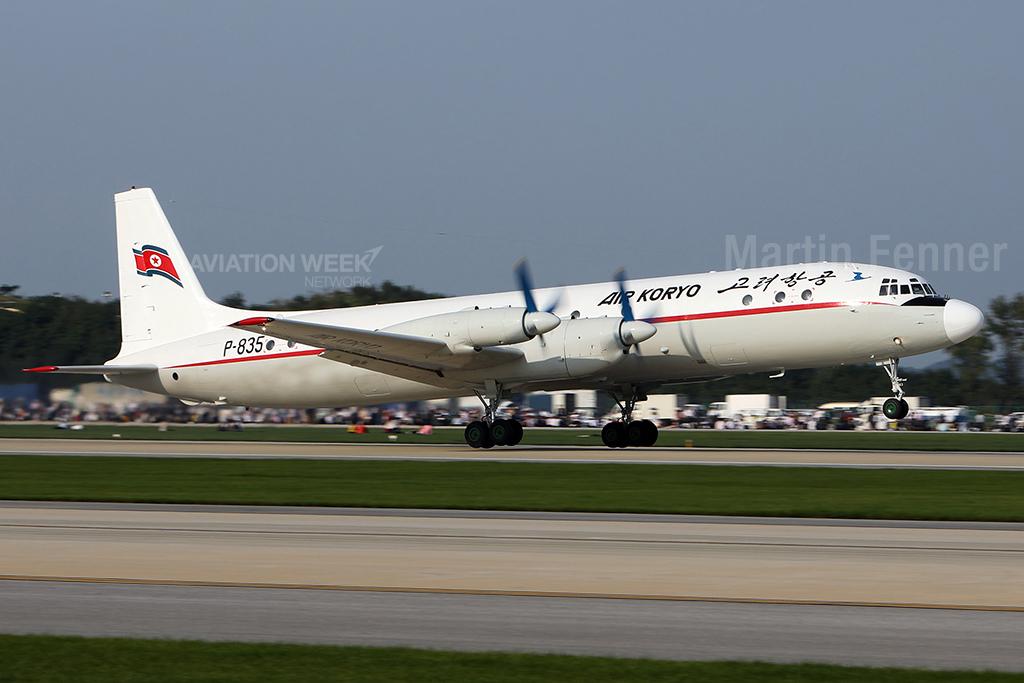 Scene From The Past

Air Koryo is one of a handful airlines that operates an entirely Soviet-era fleet, including the Ilyushin Il-18 “Coot” four-engine turboprop airliner, which is still used on domestic routes. The airline’s more modern types, such as the Tupolev Tu-154 and Tu-204, fly Air Koryo’s international routes, mainly to China and Russia. 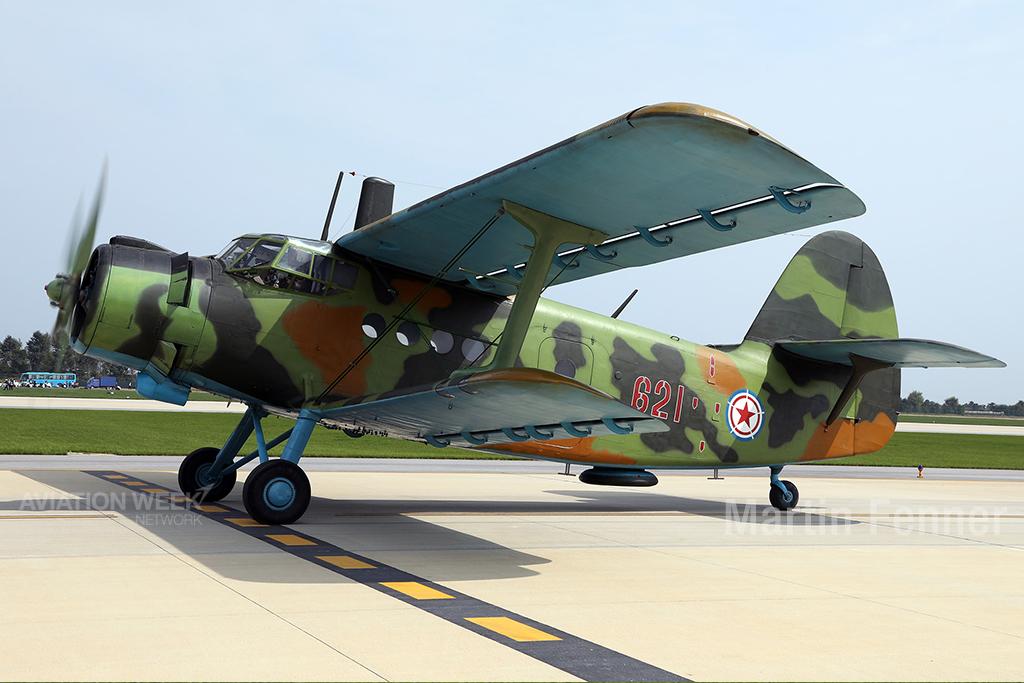 Among the most interesting types on display at Wonsan were several Nanchang/Shijiazhuang Y-5s, a Chinese license-built derivative of the Antonov An-2 biplane. These aircraft are in widespread use with the KPAAF and appear to have undergone some modification, with a large blade antenna on top of the fuselage and what could be a sensor or antenna beneath the rear fuselage. These aircraft could be used for special missions and are widely believed to be designated to carry special-forces troops behind enemy lines in any conflict with South Korea. 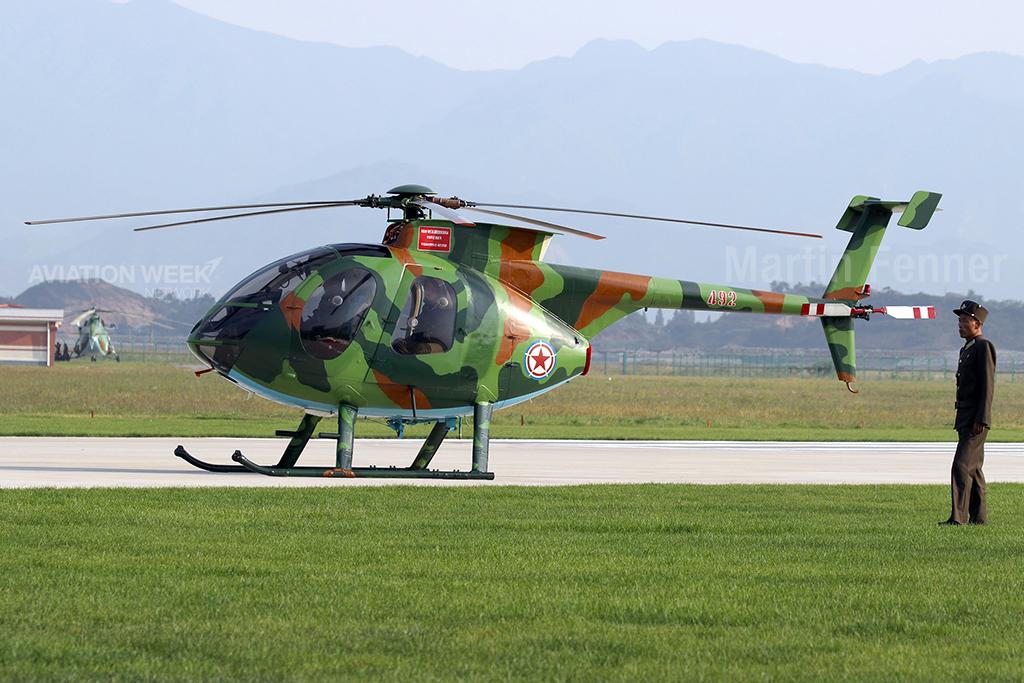 The appearance of the U.S.-made Hughes (now MD Helicopters) MD500D light turbine helicopter in North Korea may come as a surprise to many. But dozens of these machines were illegally exported into the country during the 1980s, and the images from Wonsan are among the first clear photographs of these machines. It is believed that some have been converted into light-attack helicopters equipped with a Russian-made, wire-guided, anti-tank missile. 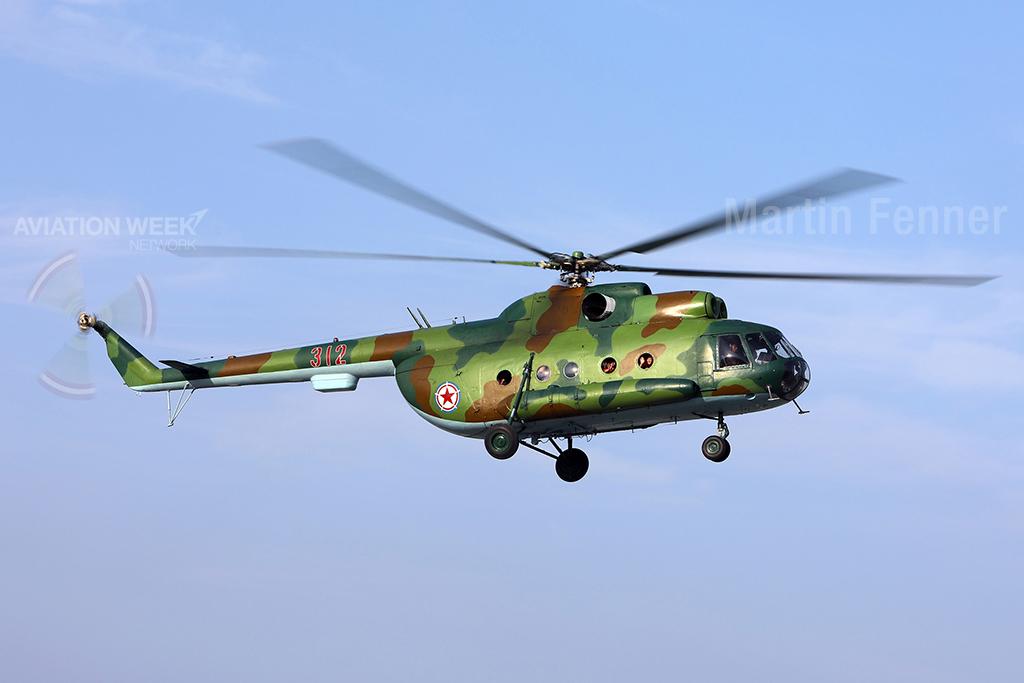 The Mil Mi-8 Hip transport helicopter is a common sight in countries with a lean to Moscow, and a large fleet remains in operation in North Korea. This camouflaged example is one of several Mi-8s at the airshow. 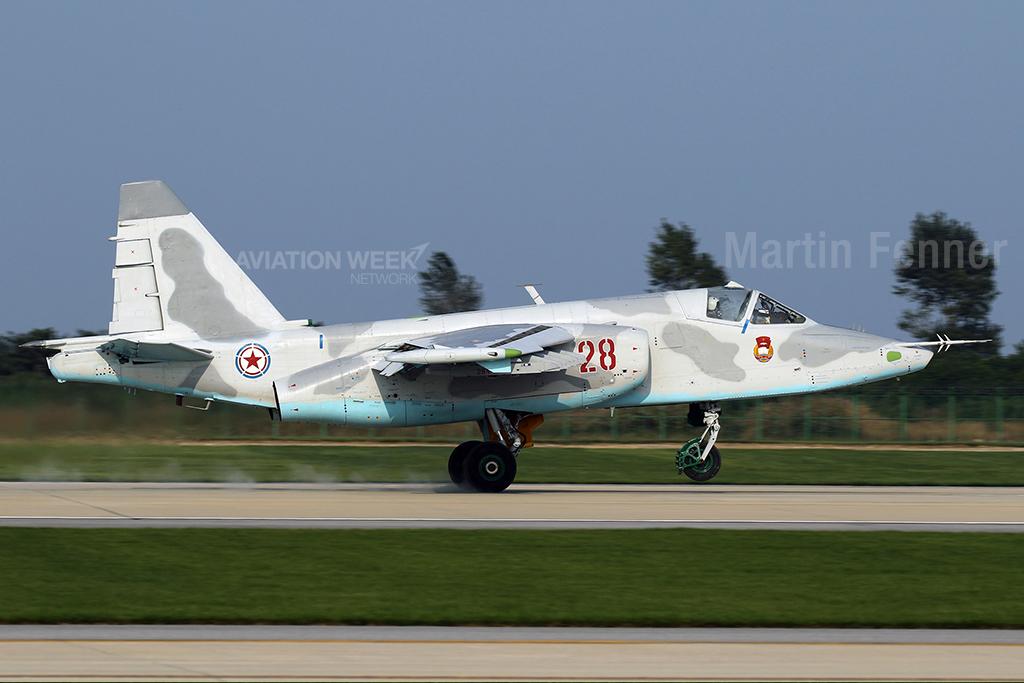 The Sukhoi Su-25, known to NATO as the Frogfoot, is North Korea’s primary close-air support aircraft. Along with the other fighters appearing at the air show, the fast jets were in immaculate condition and had been recently painted in this new gray/blue scheme. The Su-25s show no evidence of local upgrades or modernization. According to Jane’s World Air Forces, around 34 were delivered, but it is unclear how many are operational. 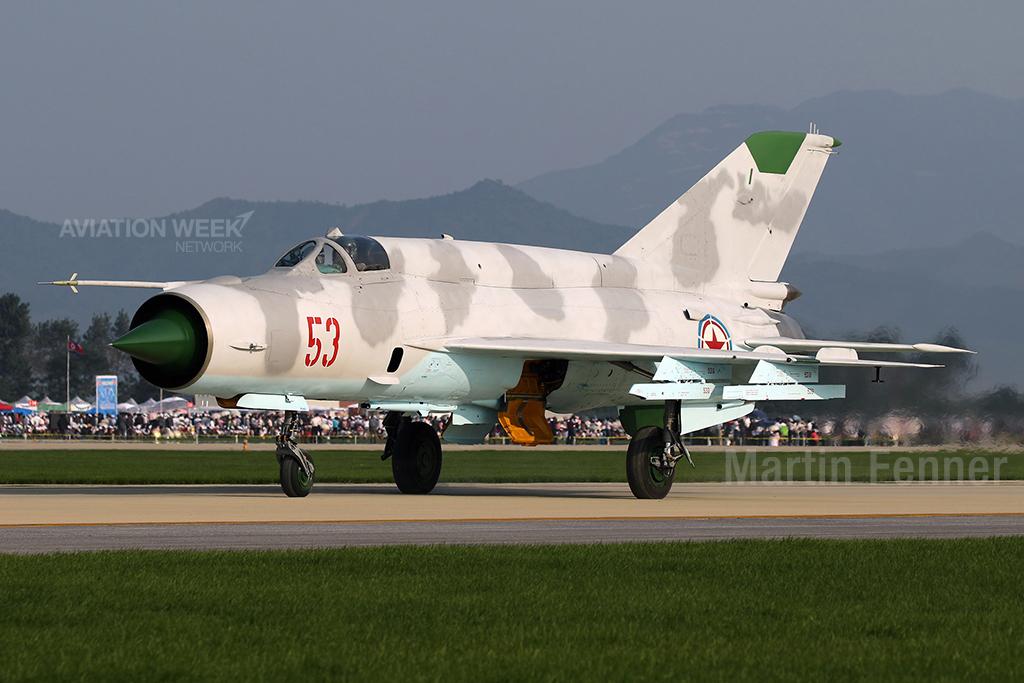 Large numbers of Mikoyan MiG-21s remain in service in a number of different versions, indicative perhaps of the variety of countries from which they have been sourced. More telling was perhaps the number of aircraft types not on display, including F-6s, a Chinese-built version of the MiG-19, and also MiG-23s. North Korea is also believed to be one of the last military operators of the MiG-15, used in its two-seat variant as a trainer. 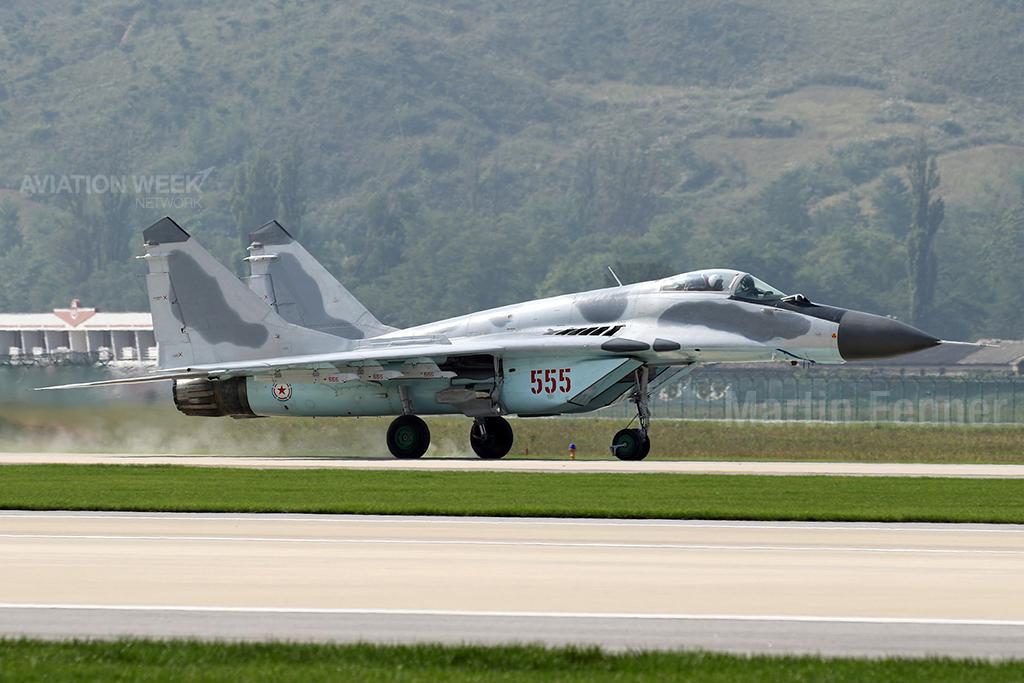 North Korea’s premier fighter is the Mikoyan MiG-29 Fulcrum, a type tasked with the air defense of the country. These are the most common aircraft type in pictures released by the North Korean government of exercises. While most reports suggest that the air force took delivery of 40 MiG-29s, other analysts say it could be half that number. 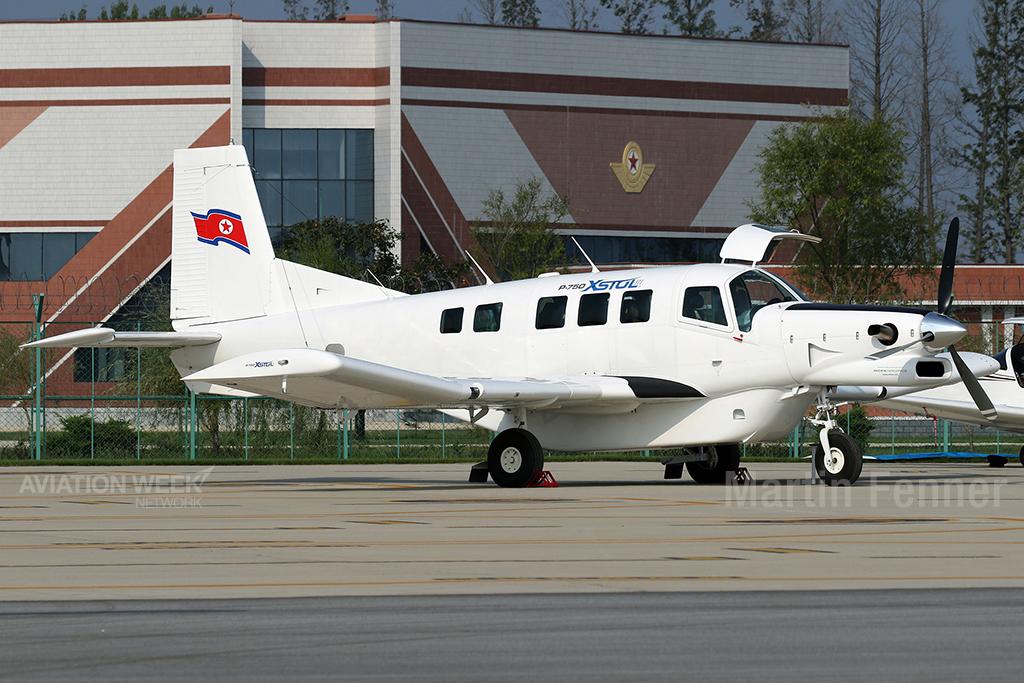 The appearance of this apparently new Pacific Aerospace PAC P-750 XSTOL turbine light aircraft surprised many Western visitors at the show. It is unclear how this aircraft could have been sourced, given the heavy sanctions placed on exports of such equipment.

For decades, the Korean People’s Army Air Force (KPAAF) has only been seen through an opaque haze of fuzzy, blurred photos and occasional propaganda images with the party elite posing in front of a fighter jet. So secretive is the state that few outsiders catch a glimpse of its military capability.

That is, until now. North Korea held its first-ever public airshow, the Wonsan Air Festival, on Sept. 24 and 25 at Kalma Airport, a newly rebuilt facility that the North Korean government hopes will be a gateway for tourism to the region. Hundreds of Western aviation enthusiasts—including photographer Martin Fenner—made their way there for the rare chance to see North Korean military aircraft.