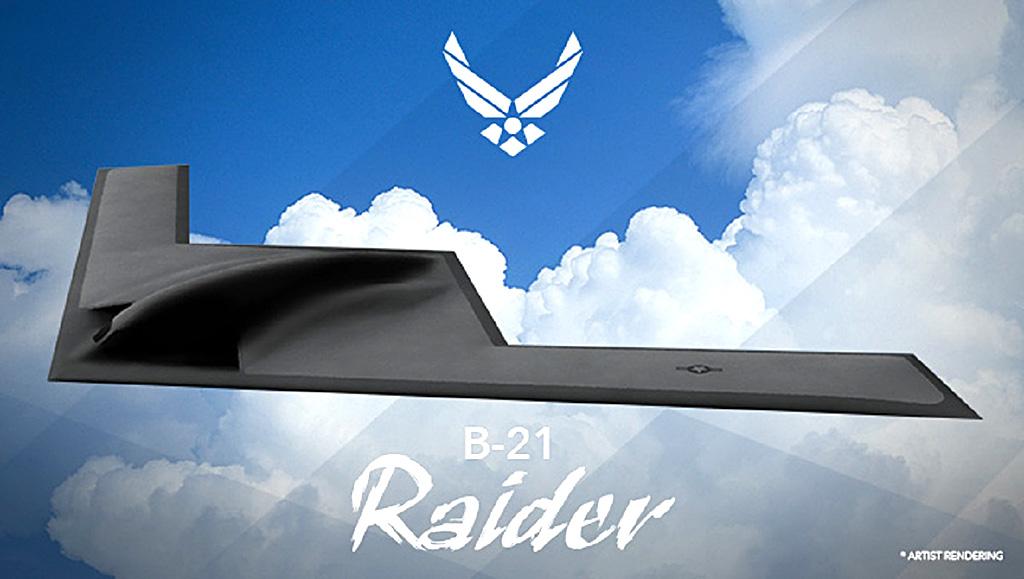 On Sept. 19, the B-21’s official name was announced as “Raider” in honor of the Doolittle Raiders, who in 1942 took off in North American B-25 Mitchells from a carrier in the Western Pacific Ocean to attack downtown Tokyo in retaliation for Japan’s assault on Pearl Harbor. The name was announced by 101-year-old Lt. Col. (ret.) Richard Cole, the last survivor of the raid. Northrop began development in earnest in February after an unsuccessful protest by the losing Boeing team. The $80 billion program will deliver 100 manned, penetrating bombers designed to drop missiles from long ranges or direct attacks in well-defended regions using stealth technology. Today, Air Force Global Strike Command has 158 bombers in its active inventory: 62 Boeing B-1Bs, 76 Boeing B-52s and 20 Northrop B-2s. The command’s leader, Gen. Robin Rand, says the B-21 will carry the B61-12 and Long-Range Standoff nuclear weapons as well as most existing and planned conventional weapons. Rand did not rule out air-to-air missiles and says there are discussions about creating defensive shields for bombers using hit-to-kill interceptors and lasers in combination with electronic methods. “We won’t take a step backward,” he says. 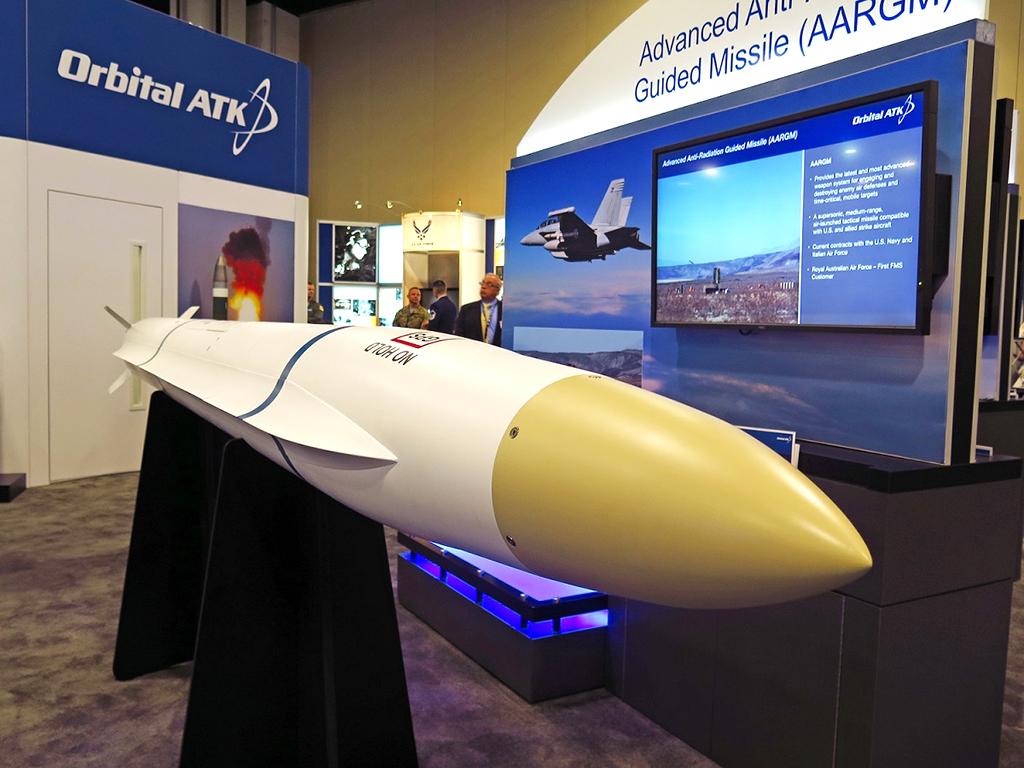 Responding to a U.S. Navy requirement for a longer-range radar killer, Orbital ATK has proposed modifying its AGM-88E Advanced Anti-Radiation Guided Missile (AARGM) with a 11.5-in. rocket motor and compact control surfaces to achieve double the range and be capable of fitting inside the F-35’s internal weapons bay. A full-scale model of the redesigned weapon is on display this week to gauge interest from the Air Force, which has been pursuing Raytheon’s High-speed Anti-Radiation Missile (HARM) Control Section Modification to meet its requirement for GPS/INS-aided targeting of enemy air defense systems. Orbital ATK’s “ARRGM-ER” employs the same seeker and warhead as the AGM-88E variant but repackages the guidance and navigation system to make room for more propellant. The missile body does away with the HARM’s protruding fins and is drop-launched instead of fired off the wing, thereby allowing internal carriage on the low-observable F-35. The Navy is still working on procurement plans but has budgeted $398 million through 2021 to develop and procure a longer-range anti-radiation weapon. 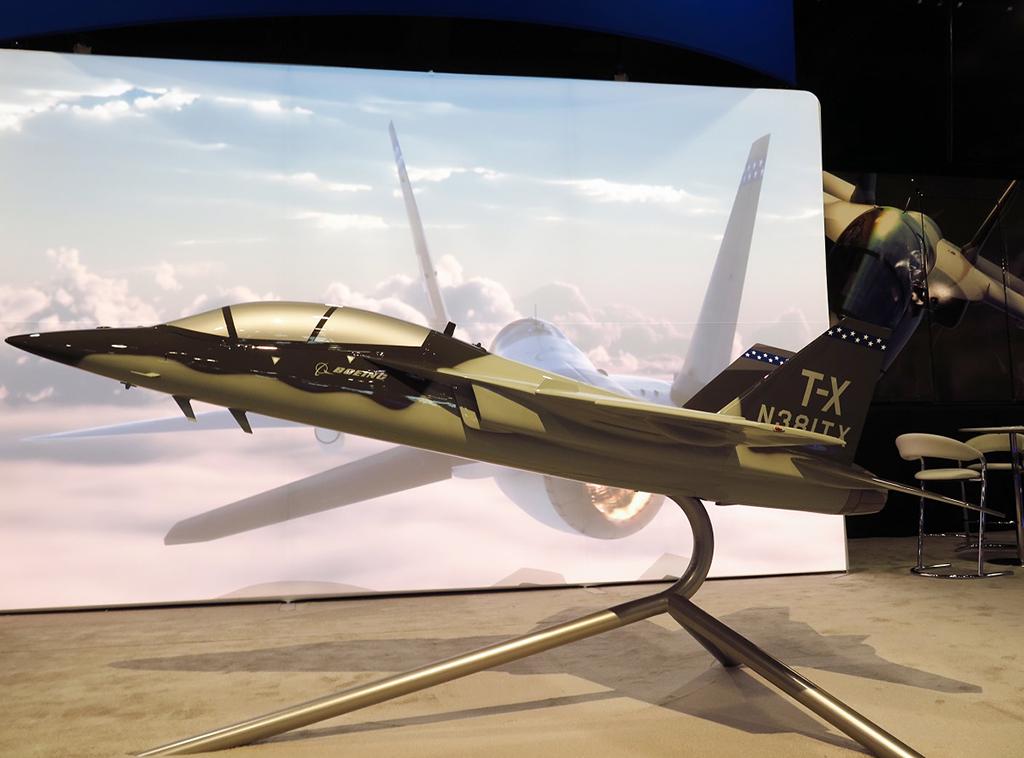 The Air Force’s requirement for at least 350 next-generation training aircraft to replace the venerable Northrop T-38 looms large at this year’s exposition, with Boeing, Northrop Grumman, Lockheed Martin and Raytheon all vying for the multibillion-dollar prize. The Boeing and Saab team is making the most noise about its clean-sheet T-X proposal (pictured), having unveiled the twin-tail, single-engine jet on Sept. 13. Northrop has kept a low profile since images of its clean-sheet aircraft emerged on Twitter in late August. The aircraft was spotted on the runway near Scaled Composites’ plant in Mojave, California. Boeing and Northrop’s new birds should fly by year-end. Meanwhile, Lockheed has been touting its T-50A at the show, as Raytheon talks up its Leonardo M-346 Master-based T-100, the only twin-engine jet on offer. The air branch will kick off the long-awaited trainer competition in December, with a downselect to one vendor expected sometime in 2017. The T-X will enter service with Air Education and Training Command in 2024 to better prepare fighter and bomber pilots for modern, information-age aircraft such as the F-35 Lighting II, F-22 Raptor and B-21 Raider. 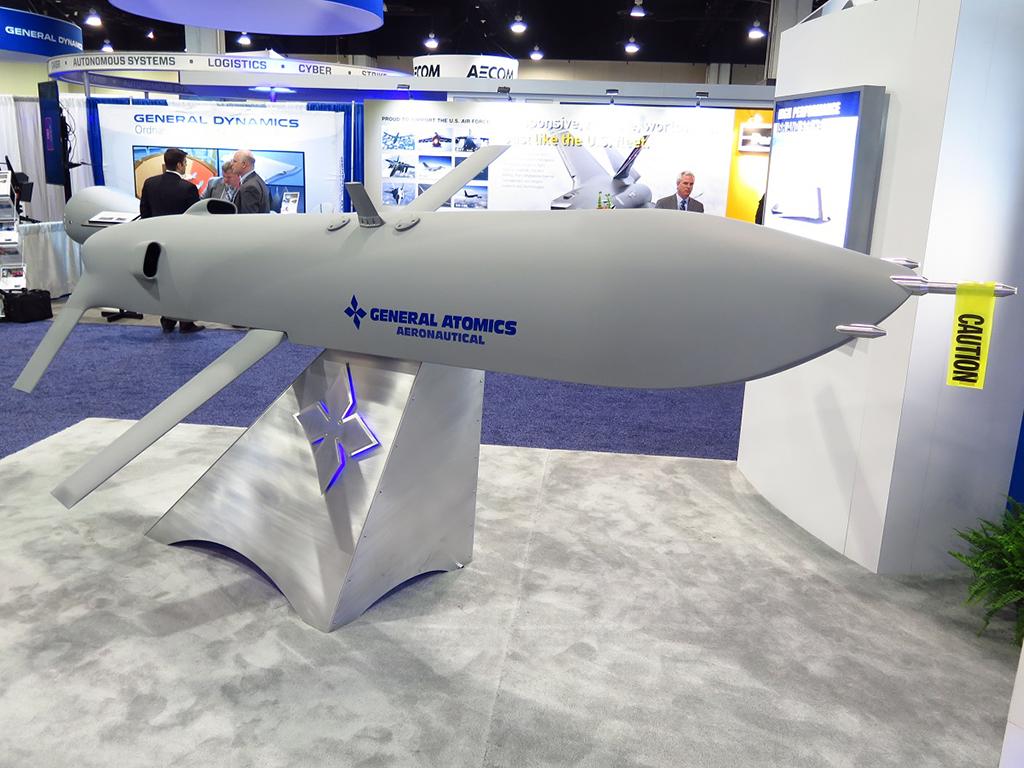 General Atomics Aeronautical Systems has unveiled its offer for the DARPA Gremlins program, a turbojet-powered Mach 0.7 drone that can be launched and recovered from a Lockheed Martin C-130. The aircraft looks more like an angry cruise missile than a “small” unmanned aircraft, but it will be networked to a C-130 “mother ship” and is fully recoverable via a hook that will be wheeled out beyond the slipstream of the Hercules turboprop. General Atomics was chosen for Phase 1 of the DARPA Gremlins program in March alongside Kratos-owned Composite Engineering, Dynetics and Lockheed Martin. The four are working toward a preliminary design review and will compete for Phase 2 of the program, which narrows the field for further maturation of designs to support a flying prototype by 2017 and recoverable demonstration by 2019.

In the smaller UAS space, defense companies are also eyeing the Air Force’s Loyal Wingman program, which seeks a high-performance, networked surveillance and strike drone that can perform in tandem with manned aircraft. Kratos has demonstrated that capability with its BQM-167A-based Unmanned Tactical Aerial Platform-22, which was recently selected for the Air Force Research Laboratory’s Low-Cost Attritable Strike UAS demonstration. After more than two decades of pursuing midsize and large remotely piloted aircraft such as the MQ-9 Reaper and RQ-4 Global Hawk, the air branch is narrowing in on smaller UAS for operations in permissive and well-defended combat zones of the future. Contractors are clearly aligning with the Air Force’s Small UAS Flight Plan, published in May. 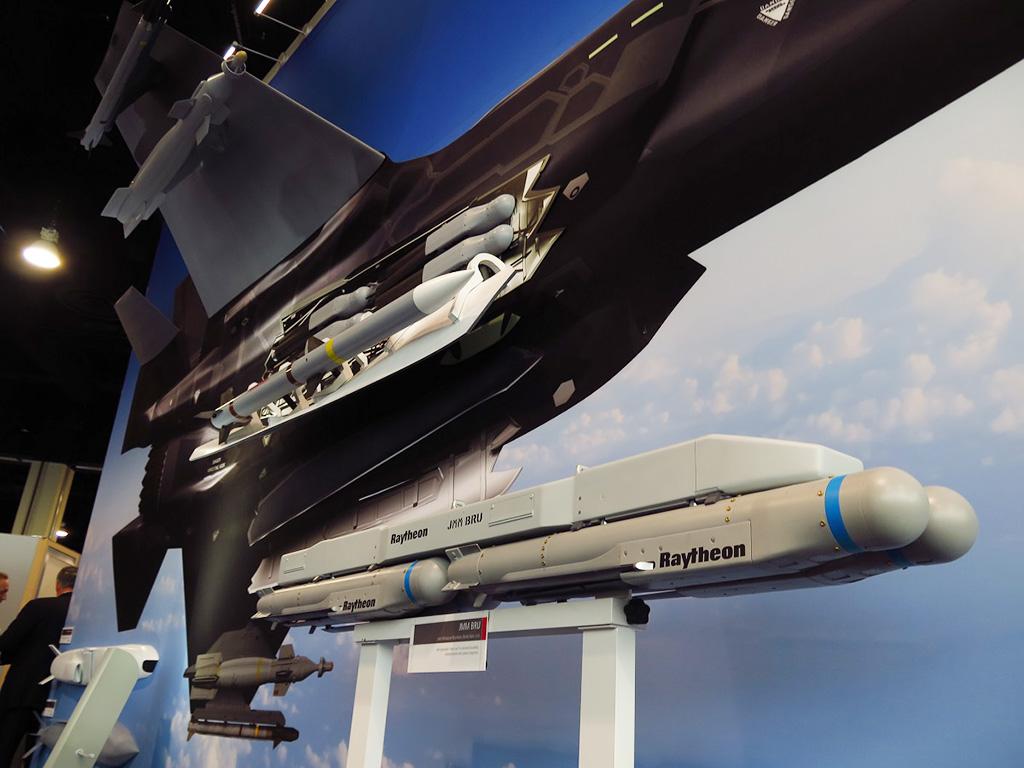 As the Air Force reaches for the next generation of air-to-air and air-to-ground weapons, it continues to explore smaller, lighter bombs that can be carried in greater volume on more platforms, particularly for close air support missions and precision targeting in cluttered war zones with less collateral damage. The 250-lb.-class Small-Diameter Bombs of Boeing and Raytheon feature prominently at the show, as do smaller weapons. Orbital ATK’s “Hatchet” mini munition is on display as the company aims for a U.S. Special Operations Command requirement for tube-launched weapons that can be deployed from the common launch tubes of AC-130 gunships and other special-mission aircraft. Dynetics recently snagged a $11.7 million contract for integration and flight testing of its Small Glide Munition. Textron continues to promote Fury at its booth, while Raytheon Missile Systems pushes its smallest weapon product, the 12-lb. Pyros Small Tactical Munition. 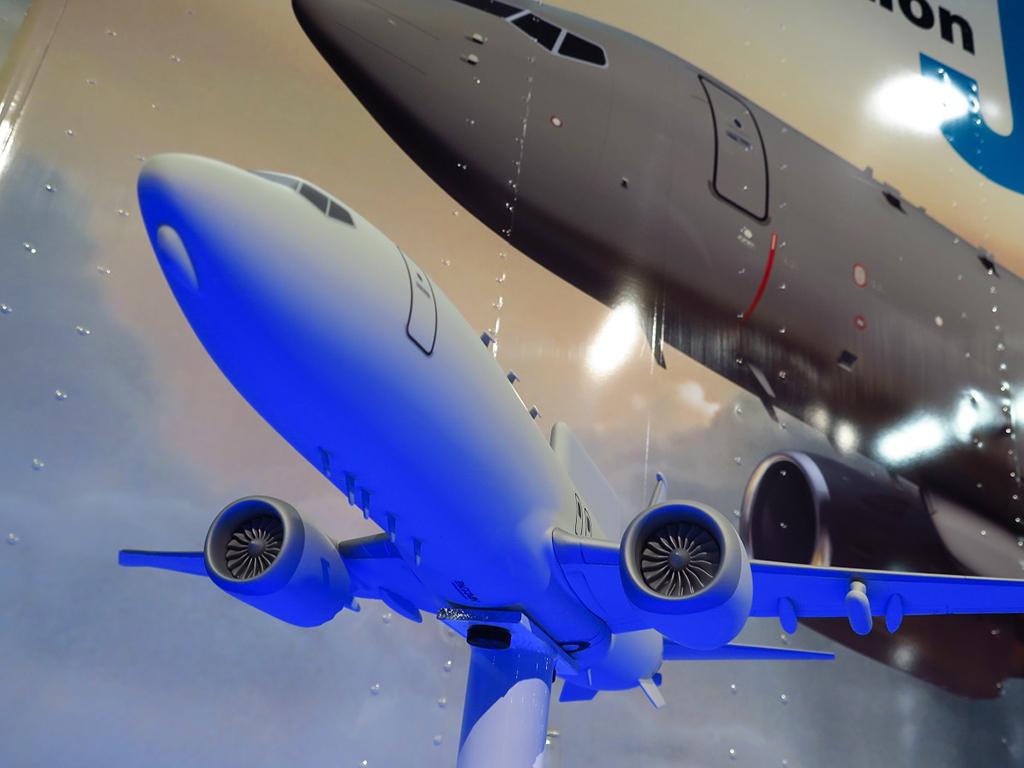 The Air Force surprised industry this year when it announced plans to rehost its EC-130H-based Compass Call mission equipment on a Gulfstream 550 Conformal Airborne Early Warning (CAEW), designated the EC-37B. Those plans are now in flux after Boeing, Bombardier and members of Congress voiced concerns about forgoing the competitive process in favor of the ready-made Gulfstream option. Over the coming decades, the Air Force will introduce replacements for the E-8C Joint STARS, EC-130H Compass Call, RC-135 Rivet Joint and E-3 AWACS, which will likely be based on business jet-size platforms. Boeing, Bombardier and Gulfstream are all offering aircraft to replace the E-8C, and there is a perception in the industry that the Air Force’s EC-37B plan would give Gulfstream a leg up in the other competitions. The EC-37B selection was disclosed in fiscal 2017 budget documents, shortly after Gulfstream won a contract from the Navy for a G550 CAEW-based test-range support aircraft for the VX-30 squadron. Boeing could offer a certified 737 airframe based on the Royal Australian Air Force’s E-7A Wedgetail to host Compass Call equipment and is already exploring options for the 737 to recapitalize the Rivet Joint signals-intelligence fleet. 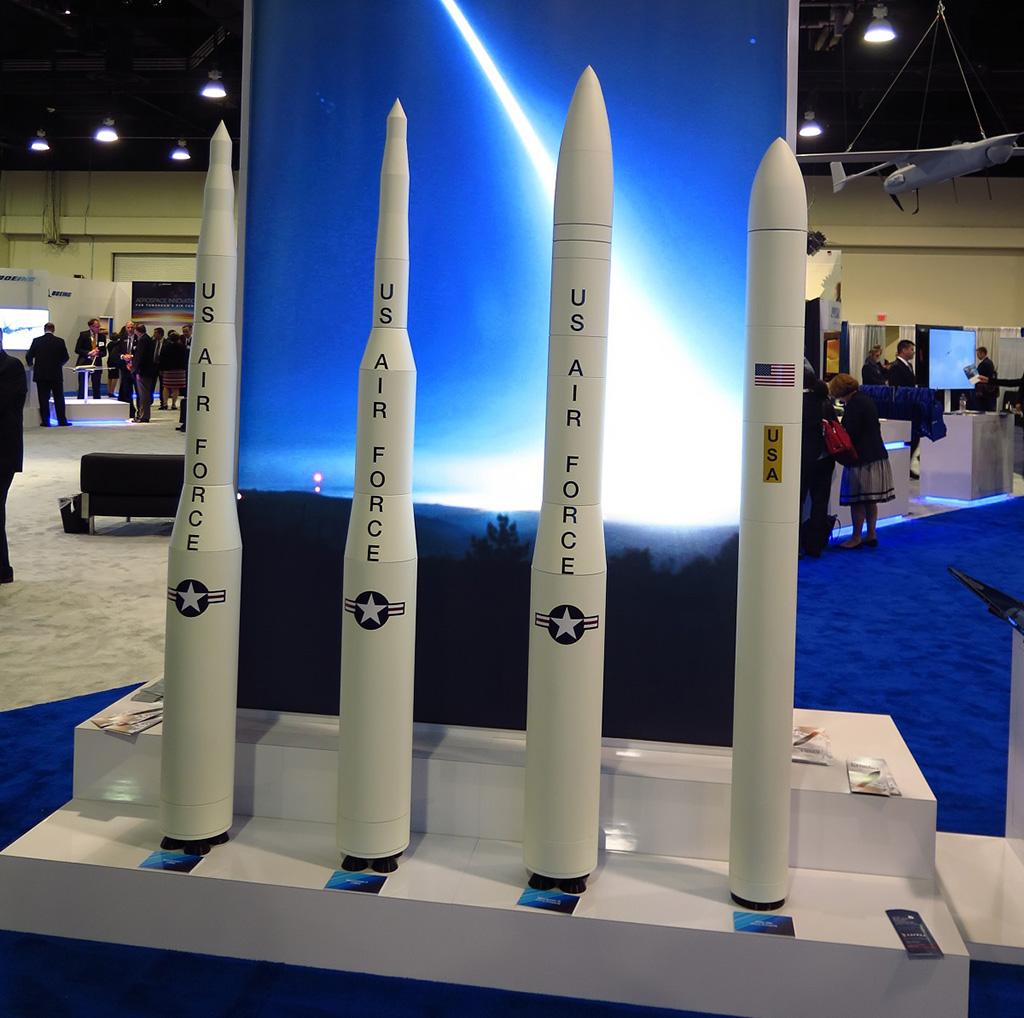 Northrop Grumman, Lockheed Martin, Boeing and their suppliers are positioning to capture the Air Force’s next-generation intercontinental ballistic missile program to replace the outdated Minuteman III. The Air Force Nuclear Weapons Center launched its Ground-Based Strategic Deterrent, or ICBM-X, competition on July 29 with a request for proposals for a three-year technology maturation phase. The service will buy 400 operational missiles and enough extra rocket bodies to support annual testing through 2075. The program cleared Milestone A on Aug. 31, despite unresolved issues about how much it will cost and how it will fit within the service’s five-year budget plan. Air Force Secretary Deborah James says the service and Pentagon have come to an agreement on funding levels in the fiscal 2018 budget plan, and more clarity on cost will come once responses to the request for proposals are received from industry. “We will be continuing to refine as we go,” she says. Up to two industry teams will move forward into a three-year technology-maturation and risk-reduction phase, with a downselect in summer 2017.

The Air Force Association’s Air, Space & Cyber conference opened with a bang on Sept. 19, with the last surviving member of the Doolittle Raiders announcing the official name of Northrop Grumman’s stealthy B-21 long-range bomber. Dubbed “Raider,” the B-21 is one of the U.S. Air Force’s top modernization priorities alongside the Lockheed Martin F-35 Lightning II and Boeing KC-46A Pegasus. Although the B-21 has taken center stage at the annual airpower conference in National Harbor, Maryland, several companies are revealing new aircraft designs and weapons as the Air Force seeks leap-ahead technology to counter the increasingly capable forces of Russia, China, Iran and North Korea while remaining engaged against terrorist groups such as the so-called Islamic State group. The requirements and programs driving industry are reflected on the show floor. They include the T-X next-generation training system and “Red Air” aggressor services, Joint STARS and Compass Call rehost, Ground-Based Strategic Deterrent, Gremlins and Loyal Wingman, as well as extended-range weapons and miniature munitions.