NATO Defense Spending: Who's Up, Who's Down? 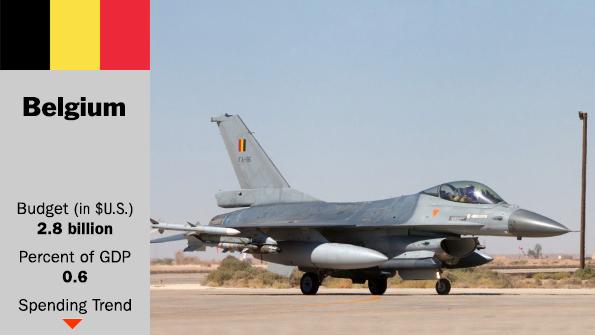 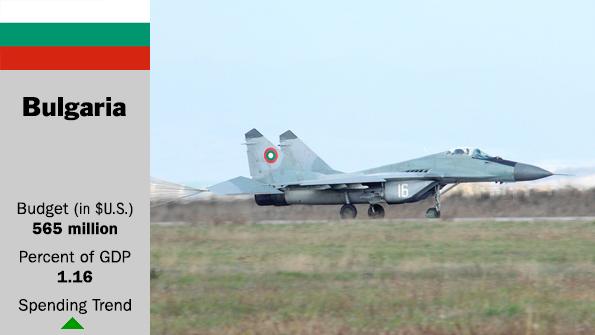 Bulgaria wants to meet the 2% target by 2024, having last met it in 2009. It plans to rebuild army capabilities and improve interoperability with NATO forces by narrowing any technological gaps with its allies. 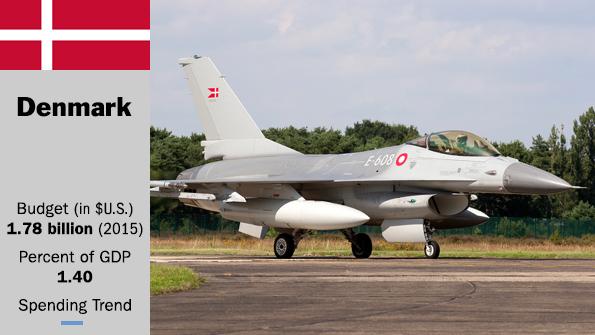 Danish defense spending is set to fall further before the end of the decade. However, Denmark looks set to strengthen its military capabilities with a new fighter aircraft to replace its current fleet of F-16s, a choice that could emerge during the early summer. 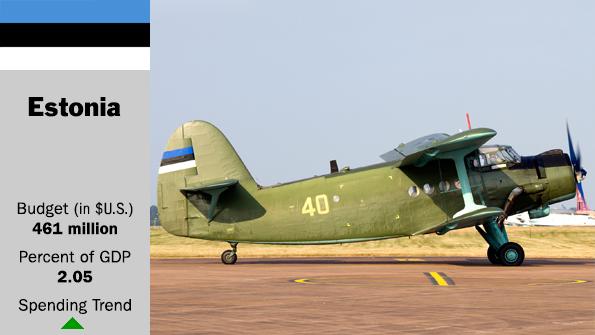 On the front line from potential aggression from Russia, which it borders, Estonia has been strengthening its small armed forces. The tiny nation along the Baltic Sea recently purchased armored fighting vehicles from the Netherlands and light transport aircraft from the U.S. It is just one of a handful of countries that meets NATO’s 2% defense spending requirement, and it plans to continue to do so. 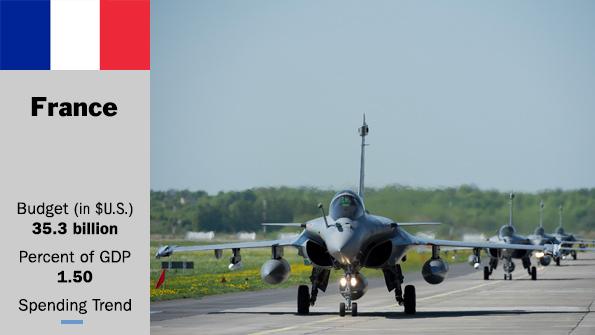 In April, French President Francois Hollande decided to slightly boost the defense budget. It will increase by €3.8 billion from 2017 to 2019. However, Hollande’s announcement is not set in stone. It remains contingent on the results of the next presidential election in 2017 and does not cover the actual cost of current operations. 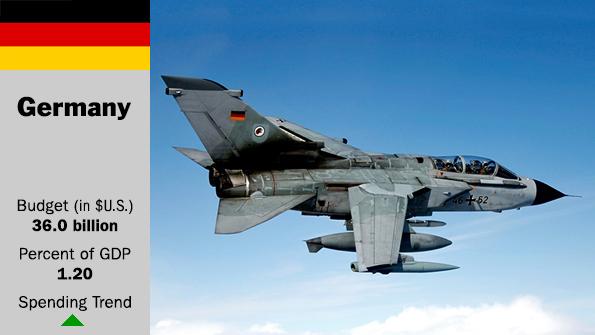 Germany announced in March 2015 that it will increase its spending 6.2% over the next five years, by €2 billion ($2.24 billion) a year from 2016. Reaching NATO’s goal of 2% is still out of reach. To meet it, Germany would need to raise its defense budget by €20 billion a year. 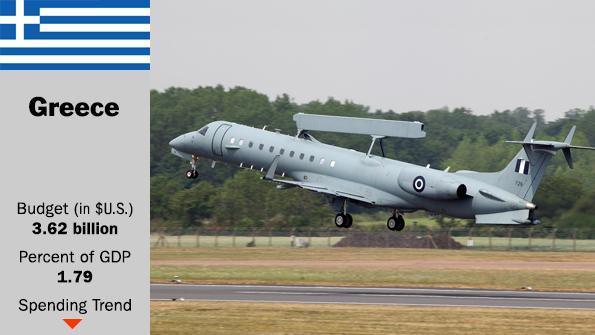 Greece’s unrelenting austerity is beginning to pinch its armed forces, following the election of the radical left Syriza government in January. For many years, Greece spent well over NATO’s 2% of GDP target, citing the need to defend itself against its old foe, Turkey. But Greece’s economic output has fallen dramatically, and military equipment spending is now being eroded as the government works out how to pay off European bailouts and interest repayments. 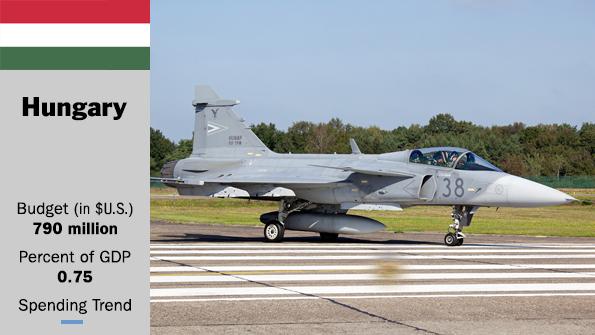 Hungary has never met the NATO target of 2% of GDP and is struggling to meet even half the target, as the country’s government spending is put toward improving the country’s economic output. Defense has received a recent 8.2% spending increase, although analysts have suggested this will achieve little. 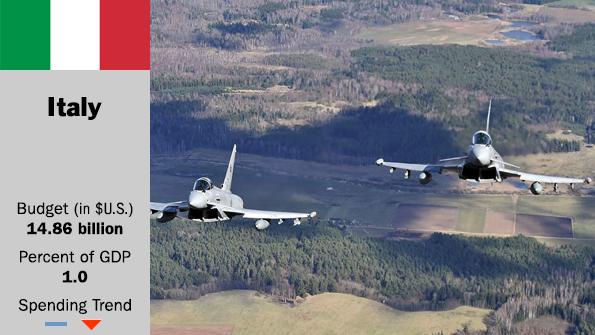 Further belt-tightening related to Italy’s long-running economic crisis has led to continuing reductions in defense spending, and in particular on programs such as the F-35. However, locally produced capabilities, such as the Eurofighter Typhoon, Hammerhead UAV and FREMM Frigates are being purchased because of their perceived impact on economic output. 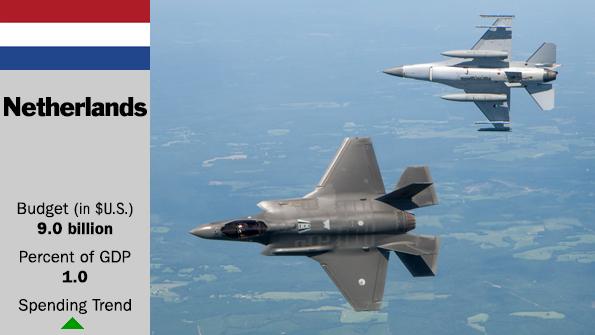 For the first time in over a decade, the Dutch government has pledged an annual structural increase in defense spending, resulting from tensions in Ukraine and the death of 193 Dutch citizens in the shoot down of MH17 over Ukraine in 2014. 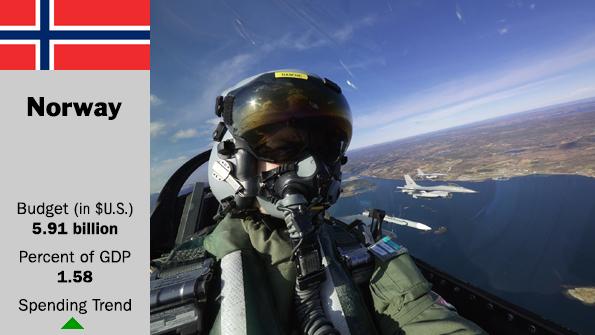 Norway’s government made a decision to increase defense spending by 3.5% in light of increased aggression from Russian and the Ukraine crisis. The money is focused on modernization programs including the purchase of the F-35 Joint Strike Fighter, the purchase of which Norway has accelerated over concerns about the viability of its F-16s during the 2020s. 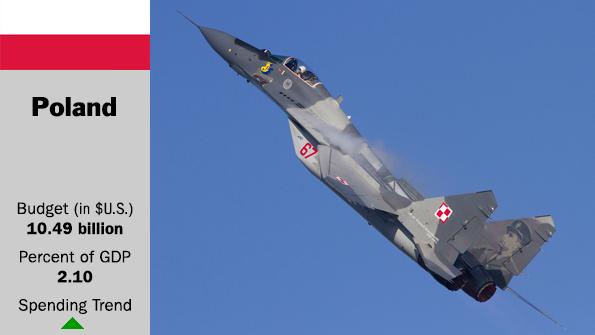 Poland is planning a major modernization of its armed forces. The conflict in Ukraine has only accelerated this process, providing additional motivation for its recent purchase of cruise missiles for the country’s F-16s and the selection of the Patriot missile defense system. Spending for new equipment now makes up more than one-third of the defense budget. Poland's finance ministry estimates the country will spend around $40 billion on new equipment in 2013-22. 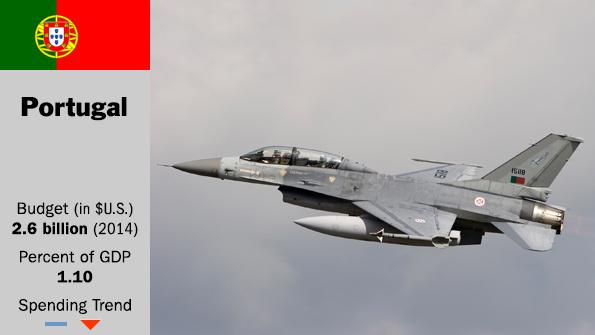 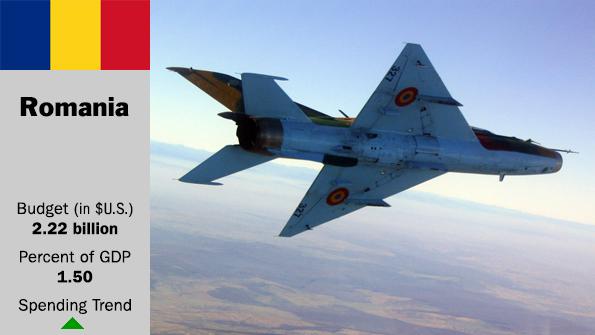 Romania increased its defense spending by 0.2% of GDP in 2014 and is aiming for the NATO 2% target by 2017 in light of the situation in Ukraine. The country has been strengthening its air force with new transport aircraft and in 2016 will start taking delivery of second-hand F-16s purchased from Portugal. 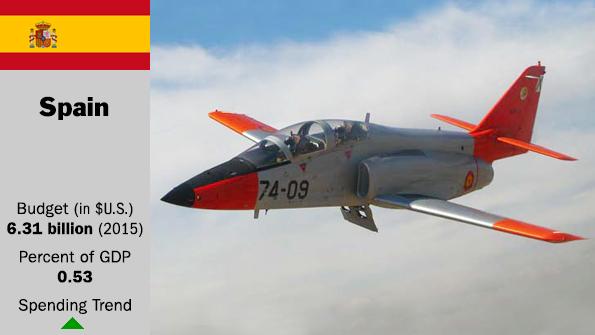 Spain is finally emerging from the economic crisis that forced the government there to significantly cut back new equipment and modernization programs. Now faced with reduced pilot readiness and a dwindling inventory, Spain is looking to increase its defense budget in 2016 and planning for a new fleet of tanker aircraft, UAVs, submarines and frigates. 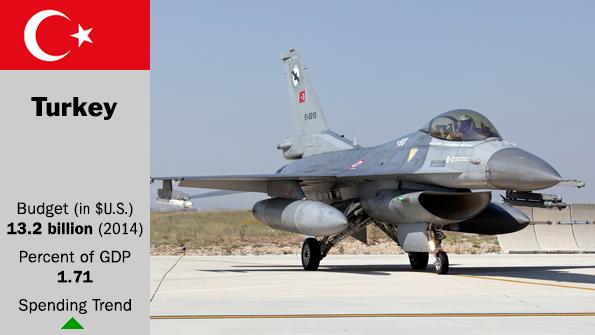 Turkey has one of the largest armed forces in NATO, and Ankara plans to spend as much as $70 billion on new military equipment through 2023. It is pushing toward the NATO target of 2% by 2018. Key spending programs include the purchase of the F-35 Joint Strike Fighter, new helicopters, new surface-to-air missile systems and the development of an indigenous fighter aircraft. 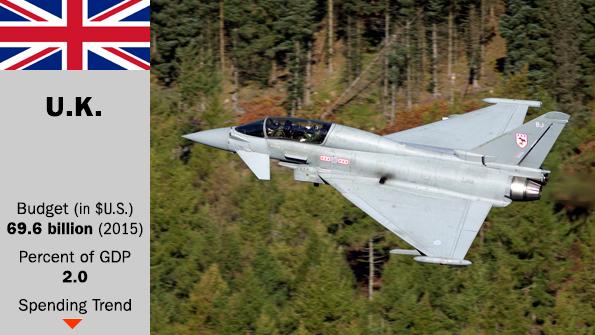 Britain has one of Europe’s largest defense budgets, and the U.K. has long aimed to keep spending above the 2% NATO target, but experts say the proportion dedicated to defense is falling. It could drop below 2% in the next few years unless additional funding comes through. The future shape of the U.K.’s defenses will be outlined in a Strategic Defense and Security Review expected in the coming months.

European NATO member countries are beginning to respond to the multinational alliance’s pledge to increase defense spending to 2% of Gross Domestic Product. Reversing years of disinvestment in the military is uneven, however. Here we look at where the increases are taking hold and where budgets remain tight.