The Embraer C-390 Millennium is already setting new standards in the tactical airlift market, the designers having created a new generation of aircraft with multi-mission capability. It provides the perfect blend of mature and proven technology with state-of-the-art thinking to ensure the best of both worlds – reliability and a new experience in performance.

The Brazilian Air Force (BAF) has been operating the C-390 since 2019, and the aircraft is already proven and in service in high-profile missions. Two years ago, for example, the aircraft proved to be critical in responding to the COVID crisis in the country, bringing hope and practical relief to those most in need. In terms of global crises, it has also completed humanitarian support missions in Beirut to support the victims of a devastating explosion within the port, in Haiti to support the victims of a deadly earthquake, and most recently, helping in the repatriation of Brazilians and other nationals fleeing from the conflict in Ukraine.

In 2021, the aircraft impressed during Operation Culminating, an unprecedented joint training exercise between the BAF, the United States Army, and the Brazilian Army, to prepare paratroopers and crews for deployment in air-land operations. Throughout the exercise, the C-390 Millennium successfully demonstrated its excellent interoperability with other aircraft and armed forces performing Aerial Assault, Aerial Infiltration, and Medical Evacuation missions. 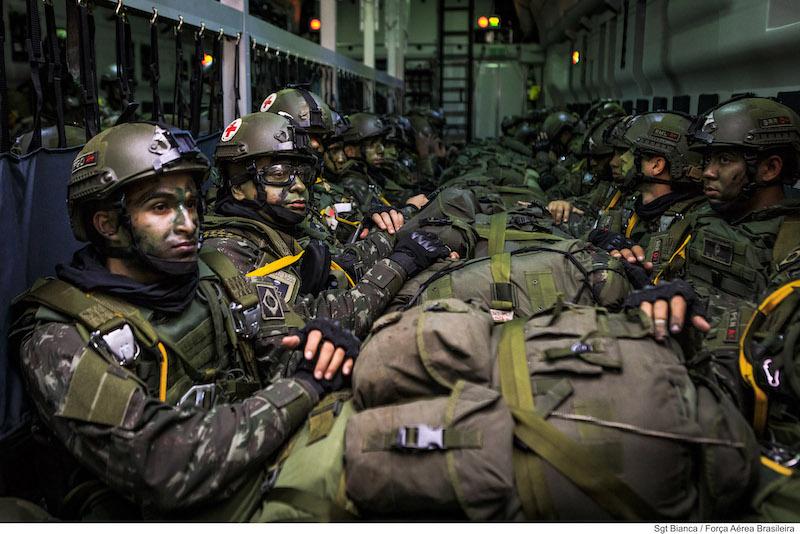 Most recently, the Millennium was part of a combined humanitarian aid exercise (Operation ‘Cooperación VII’) involving a combined air component featuring aircraft from the United States, Canada, Chile, Honduras, Colombia and Brazil, in addition to military contingents from eight other countries. A total of 36 missions were carried out by the C-390, from aero logistics transport missions to airdrops, with 100% availability of the aircraft throughout. It was also able to demonstrate its versatility, operating from airfields with vastly different elevations, from 570ft through to 8,400ft. 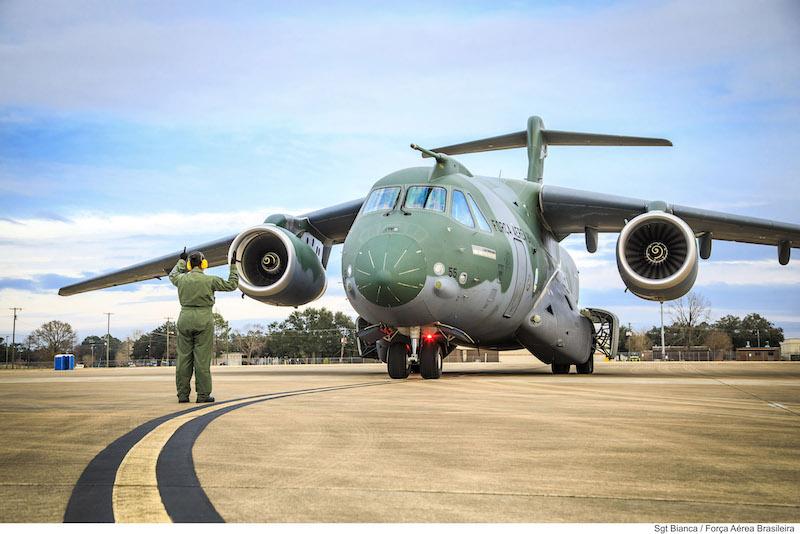 Embraer works with more than a dozen global partners who, between them, deliver some 60% of the Millennium’s parts, equipment and systems. It also has export licenses with a further 11 countries, which ensures a global spread of expertise, including the knowledge and capability to support C-390 Millennium aircraft wherever they are operating. This expertise, together with a support network of more than 80 MROs, 10+ owned service centers, a further 80 or more authorized service centers, and well in excess of 200 field support representatives, demonstrate the depth and breadth of Embraer’s commitment to the C-390 platform.

While the Millennium may be manufactured locally in Brazil, Embraer’s Material Solutions business supports a global fleet of more than 4,000 aircraft. It has a network of nine distribution centers for parts and spares, and more than 70 storage locations, which are interconnected to ensure essential parts are always available, wherever and whenever they are needed.

Maintenance is, of course, an essential part of keeping an aircraft operational for longer. But unnecessary maintenance can create more problems than it solves. Embraer uses the Maintenance Steering Group 3 (MSG-3) philosophy to plan maintenance at intervals that recognize the inherent reliability of aircraft systems and components.

It works on four guiding principles: that maintenance is only effective if the task is applicable; excessive maintenance does not deliver improved reliability; unnecessary tasks can introduce human error, creating an issue that didn’t previously exist; and that close monitoring of parts and systems is generally more effective than hard-time overhauls.

The MSG-3 philosophy, one favored by many modern aircraft, is complemented by AHEAD – Embraer’s Aircraft Health Analysis Diagnosis. This collates and interprets data from onboard systems, enabling operators to quickly troubleshoot when an issue occurs to prevent a minor problem from becoming a potentially major incident. Aircraft systems and engine performance data can be transmitted live to anywhere in the world, allowing corrective actions to be taken even before the aircraft has touched the ground. 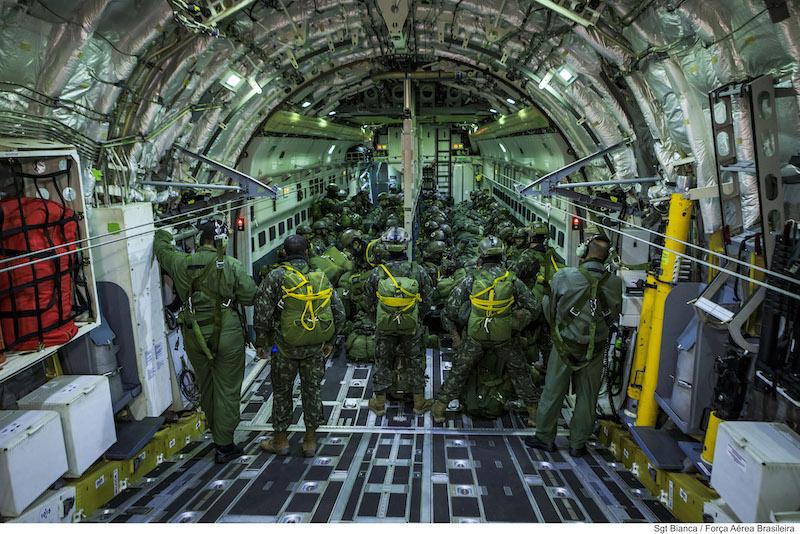 By adopting this philosophy, the C-390 can go for longer intervals between each maintenance visit. The plan also reflects the simplicity enjoyed by commercial operators in being divided into three specific streams:

• Line checks – comprising those checks that can be performed overnight or during a break in transit including draining and replenishing the oil systems, changing the brakes or tires, topping up lubricants, and visual checks to flaps and slats.

• Intermediate checks – comprising the checks necessary after every 600 flying hours, which are classified as low complexity and can be done outside the hangar.

• Base checks – checks that are planned to be carried out every five years, which range from the simple visual and operations checks to the more detailed tasks, including structural inspections.

The V2500 engine is now used on three separate airframes: the Airbus A320 Family; the Boeing MD-90; and the Embraer C-390 Millennium. To put that into context, approximately 190 airlines and lessors from around 70 different countries operate the V2500 engine, which demonstrates how they are proven in the field, highly reliable, and easy to support. They are designed to operate for 30 years without the need for any major overhaul, reducing lifetime costs by as much as 30% against comparable aircraft. 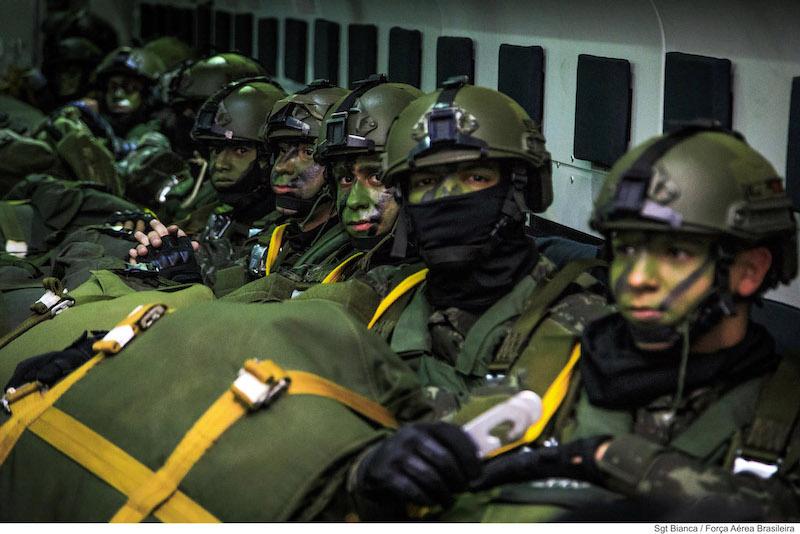 These and other factors, such as the C-390’s full fly-by-wire capability, which negates the need for any control cable inspections and adjustments, and a landing gear with more than 30 million flying hours of engineering experience behind it, help support the reliability of an already incredibly reliable aircraft. When all factors are taken into account, the C-390’s operational costs are, on average, 30% less per mission than other typical tactical airlifters. It has been delivering an operational availability above 80% and a completion rate (operational reliability) of 99% in the Brazilian Air Force - a truly remarkable statistic.

In choosing the C-390 Millennium, therefore, operators are buying in to a local manufacturer with a truly global outlook and proven capability, from the parts and equipment it uses to the infrastructure it deploys to keep those aircraft in the air. And it backs its manufacturing and maintenance philosophy with a similarly global approach to support, giving operators access to high-end training tools and devices, and real-world training to prepare pilots for the real-world challenges that lie ahead.