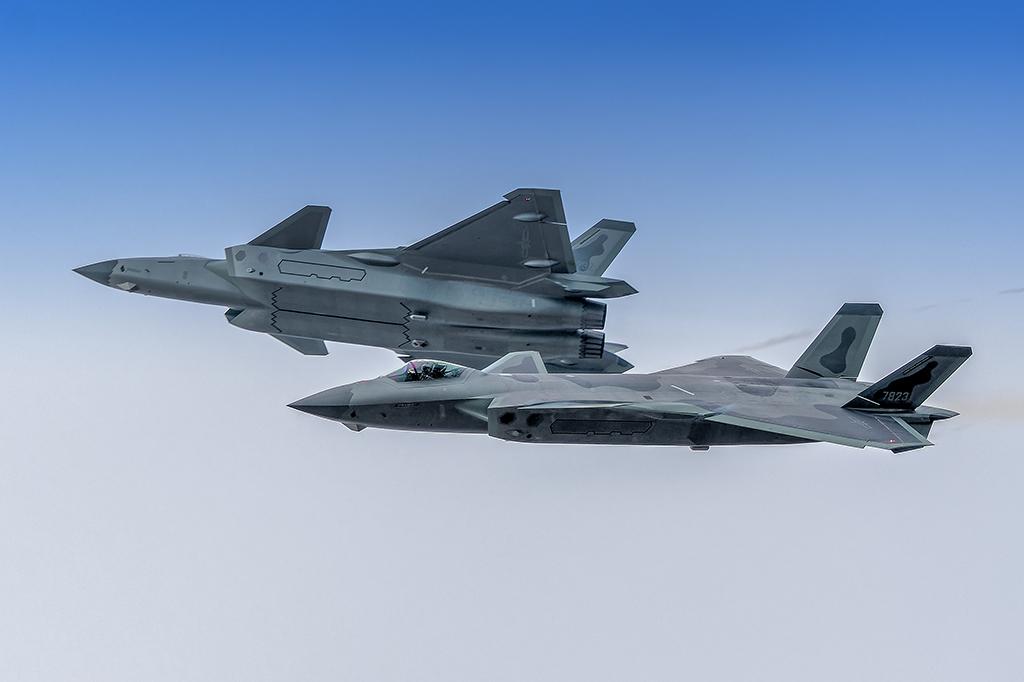 The new-generation Chengdu J-20 78231 and 78232 fighters, which appeared in Zhuhai in November 2018, belong to the first batch of serial aircraft (after prototypes and eight low-rate initial-production aircraft) that entered service with the People’s Liberation Army Air Force (PLAAF) at Cangzhou Flight Training Base at the beginning of 2018. The fighters bear a two-tone color scheme with low-visibility markings and additional outlines that emphasize the main weapons bay and two side weapons bays. 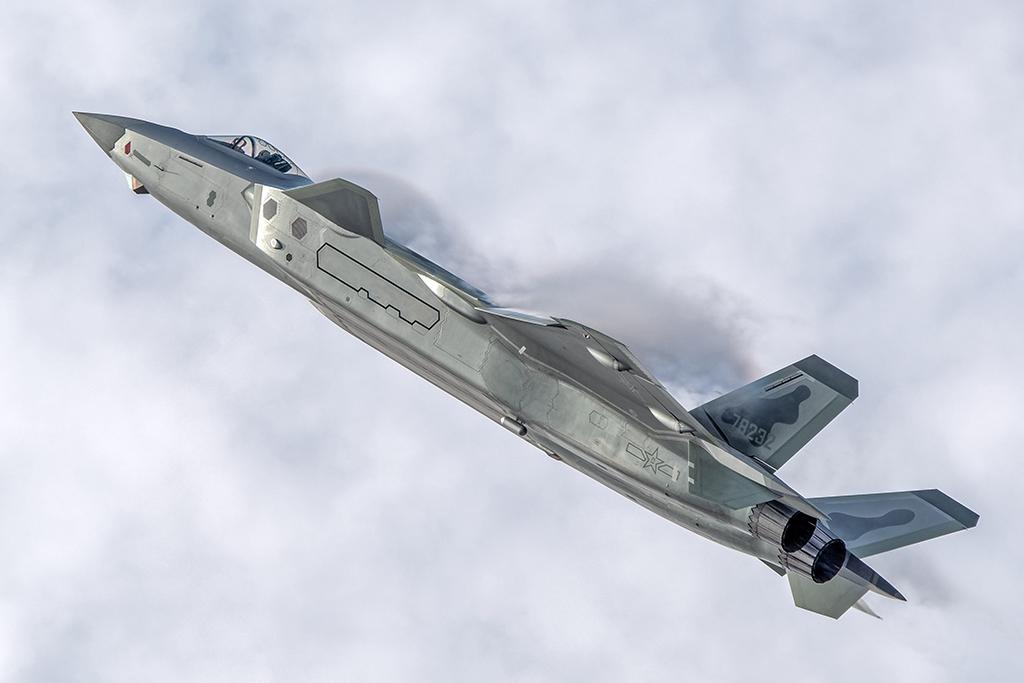 For the display, the J-20s were fitted with corner reflectors designed to disturb measurement of the aircraft’s actual radar cross-section. During the last performance on the closing day of the exhibition (for which I was not present), the fighters opened their weapons bays revealing four beyond-visual-range PL-15 air-to-air missiles in the central bay and two close-air combat PL-10 missiles in the side bays. 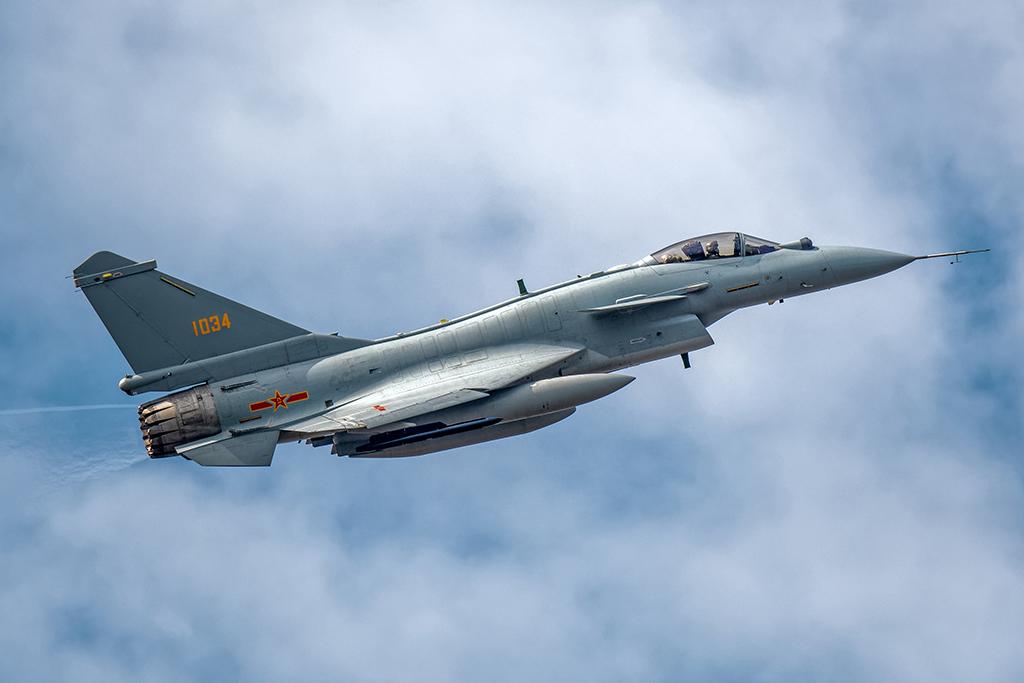 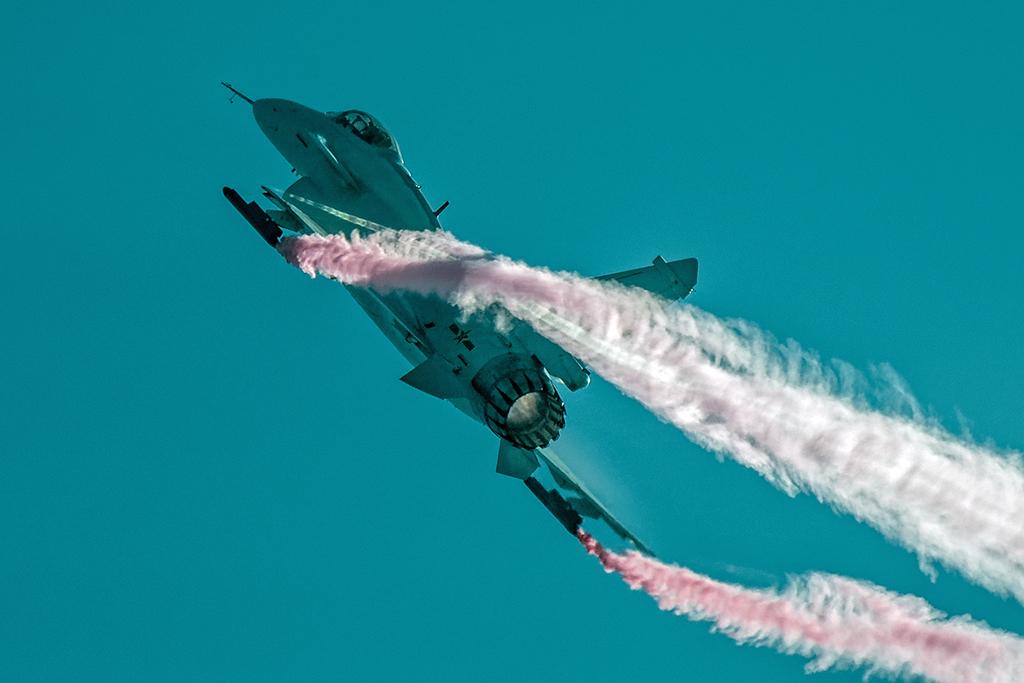 According to the Aero Engine Corp. of China (AECC), thrust vectoring significantly increases the aircraft’s close-range combat ability and can effectively shorten the aircraft’s approach and landing distance. The test results may be beneficial to the J-20 fighter project. 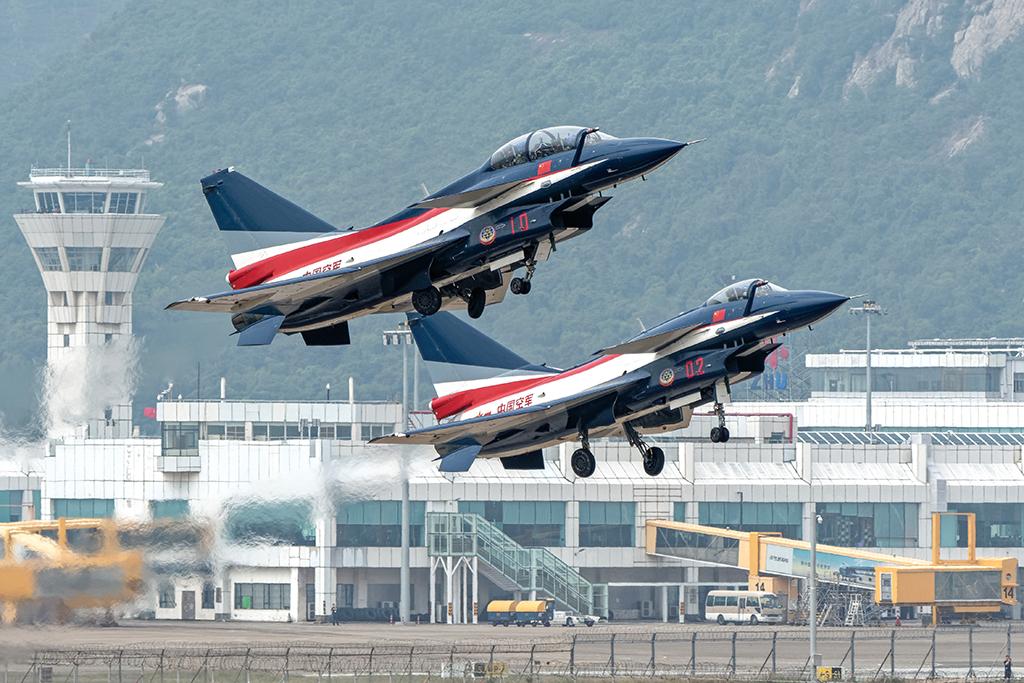 The two-seater J-10AY and J-10SY fighters take off for the performance. The letter “Y” in the name signifies that it is a version adapted for an aerobatic team, without a weapons system but with smoke generators under the wings. The fighters belong to the PLAAF August 1st aerobatic group, popularly known as “Ba Yi,” or “81.” The team name represents the date of the establishment of the People’s Liberation Army on Aug. 1, 1927. 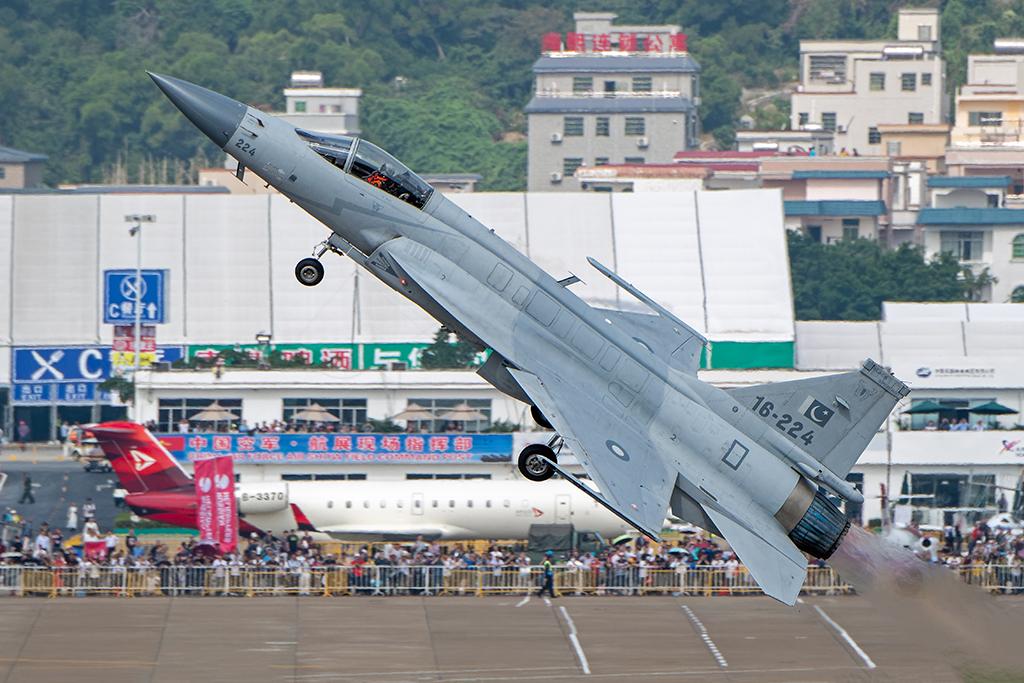 Pakistan, China’s closest ally, arrived in Zhuhai with a large delegation. The Pakistani-Chinese JF-17 (FC-1) Thunder fighter displayed a dynamic air performance. The JF-17 is a classic lightweight single-engine fighter with a delta wing and features relatively modern open-architecture avionics. Two export customers for the JF-17 are Myanmar and Nigeria. The number 16-224 represents the year of production (2016), the block version (2) and the aircraft production number (24). 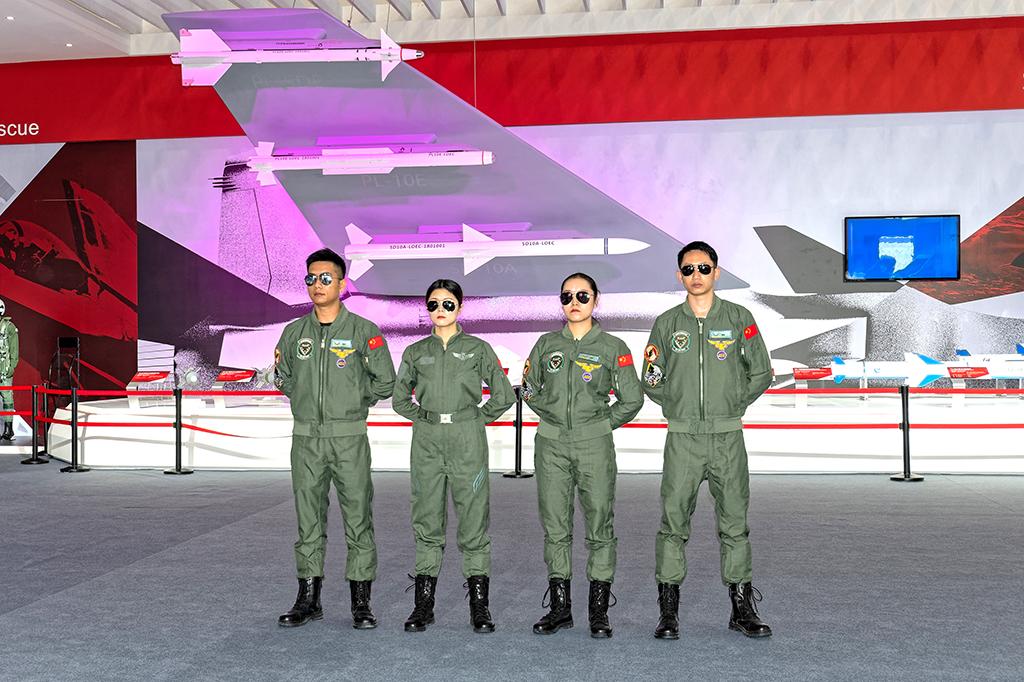 China is proud of its air force: In the background are three PL-5DE, PL-10E and SD-10A (PL-12) air-to-air missiles. The most interesting is the one in the middle, the new-generation PL-10E missile (“E” stands for “export version”), which entered service around 2015 and is intended for close-air combat. It features an imaging infrared seeker and thrust vectoring, giving the missile a high off-boresight angle and ability to fight highly maneuverable targets. The PL-10 belongs to the same class as the AIM-9X. 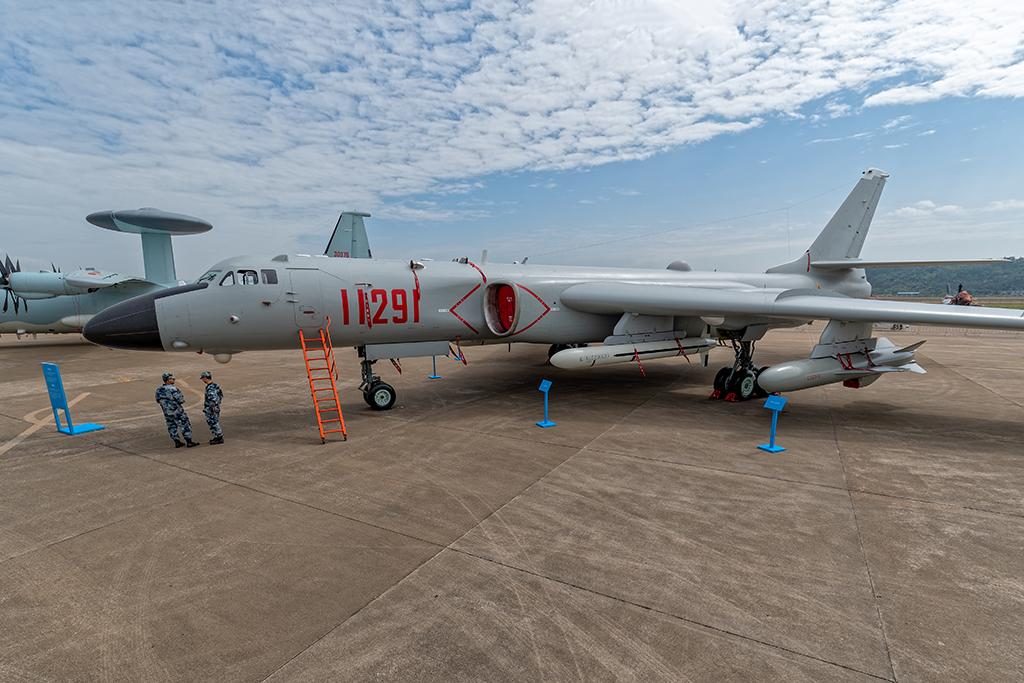 The H-6K substrategic bomber, a deeply revised version of the Soviet Tupolev Tu-16 Badger bomber of the 1950s, is still in production at Xian Aircraft Corp. 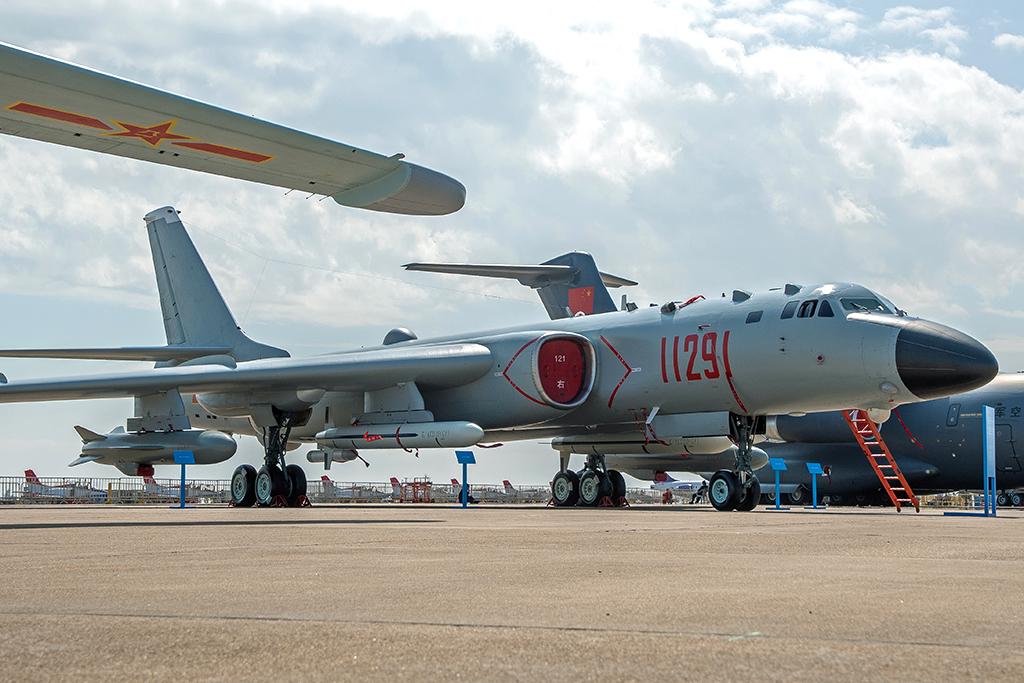 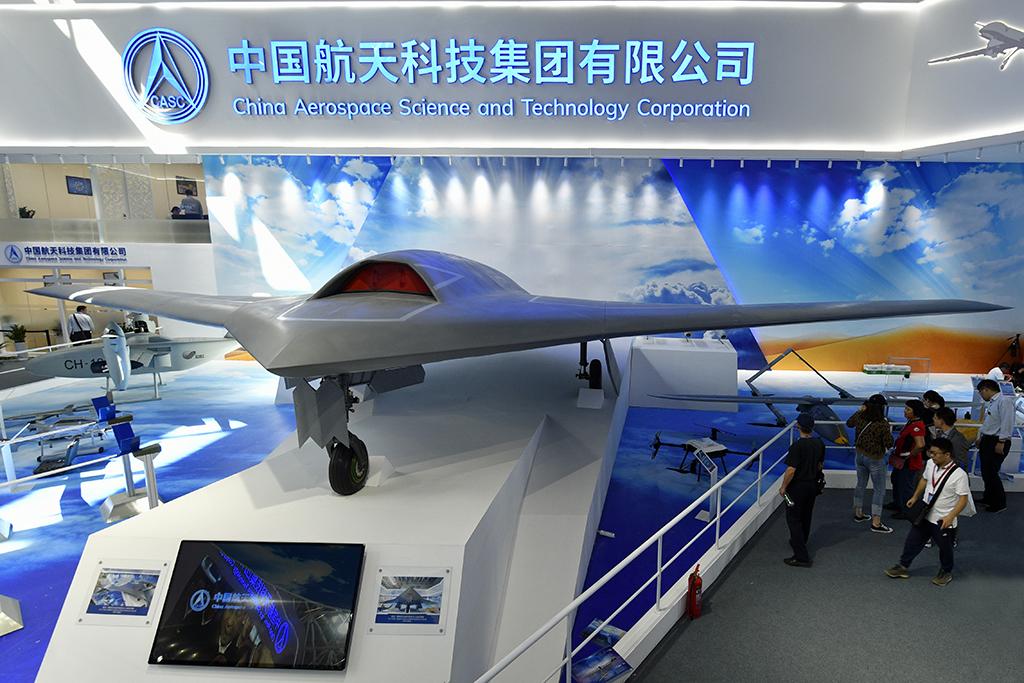 Featured in the center of the pavilion of the China Aerospace Science and Technology Corp. (Casc) was the debuting mock-up of the heavy CH-7 unmanned combat air vehicle (UCAV). According to the official brochure, the CH-7 carries its weapons in two internal bays, and “thanks to the stealth features, it can operate deep in the enemy’s position.” The CH-7’s tasks include attacking enemy early-warning aircraft with long-range anti-radiation missiles “in an operation coordinated with manned fighters.” The CH-7 is a 13-ton flying wing with a maximum speed of Mach 0.75. Shi Wen, the head of CH (Caihong, or Rainbow) series UAV programs, said in Zhuhai that this is the company’s own program, with no external funding. The CH-7 is one of several UCAVs currently produced in China—though by no means the most important. That distinction goes to the Sharp Sword (unfortunately not shown in Zhuhai), which is made by Hongdu and enters production and service as the GJ-11. It was unveiled on Oct. 1, 2019, during the military parade celebrating China’s 70th anniversary. 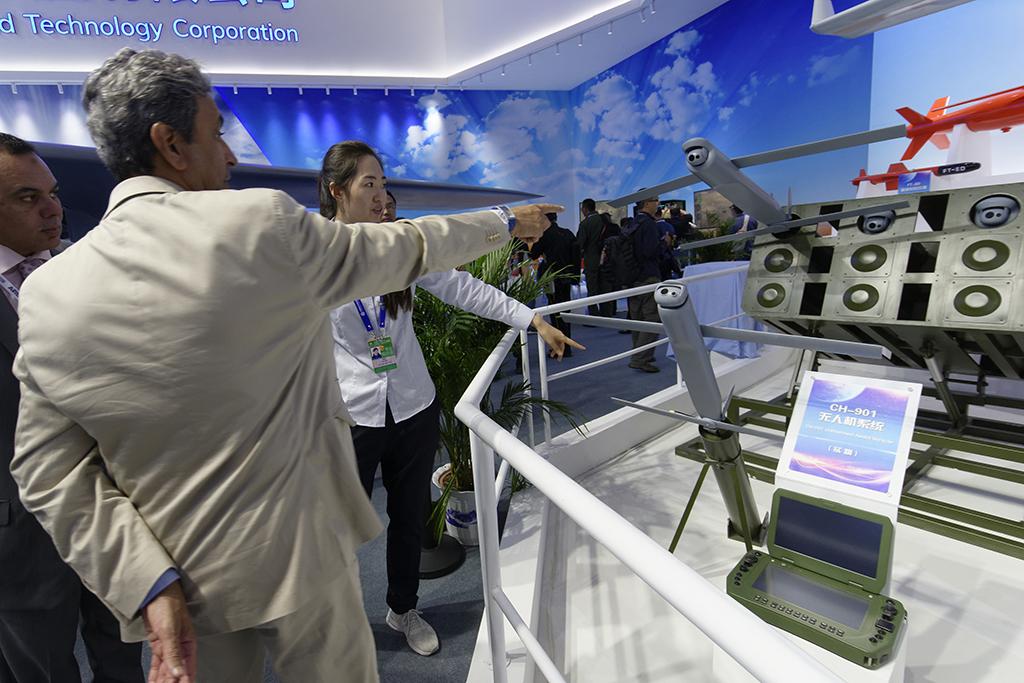 Small, 20-lb. CH-901 UAVs are deployed from ground launchers or released from larger aircraft, giving them extended reach. In September 2020, China Electronics Technology Group published footage of the mass launch of these UAVs from a 48-tube mobile ground launcher and a helicopter; the CH-901s then swarmed and attacked ground targets. 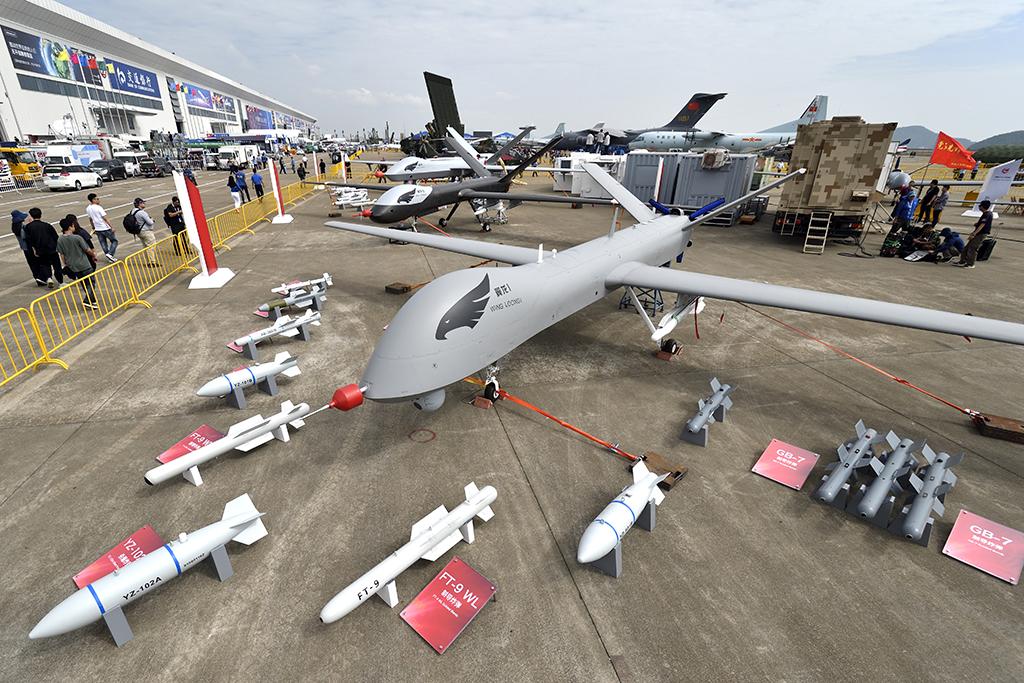 The Wing Loong I medium-altitude, long-endurance unmanned aircraft by Chengdu Aircraft Research & Design Institute is similar to the U.S. MQ-1 Predator. Wing Loong, its export name, is designated as the GJ-1 (Gongji, or “attack”) while in service with the PLAAF. Export customers include Egypt, Indonesia, Kazakhstan, Saudi Arabia, Serbia, United Arab Emirates and Uzbekistan. The Wing Loong I’s primary weapons are two KD-10 (BA-7, Blue Arrow) laser-guided, anti-tank missiles, pictured here under the wing. In front is an advertising line of alternative weapons that are not integrated in the UAV. The black UAV behind is an improved Wing Loong I-D version that features a more powerful diesel engine and 70% composite construction. It made its first flight on Dec. 23, 2018, after the Zhuhai show. 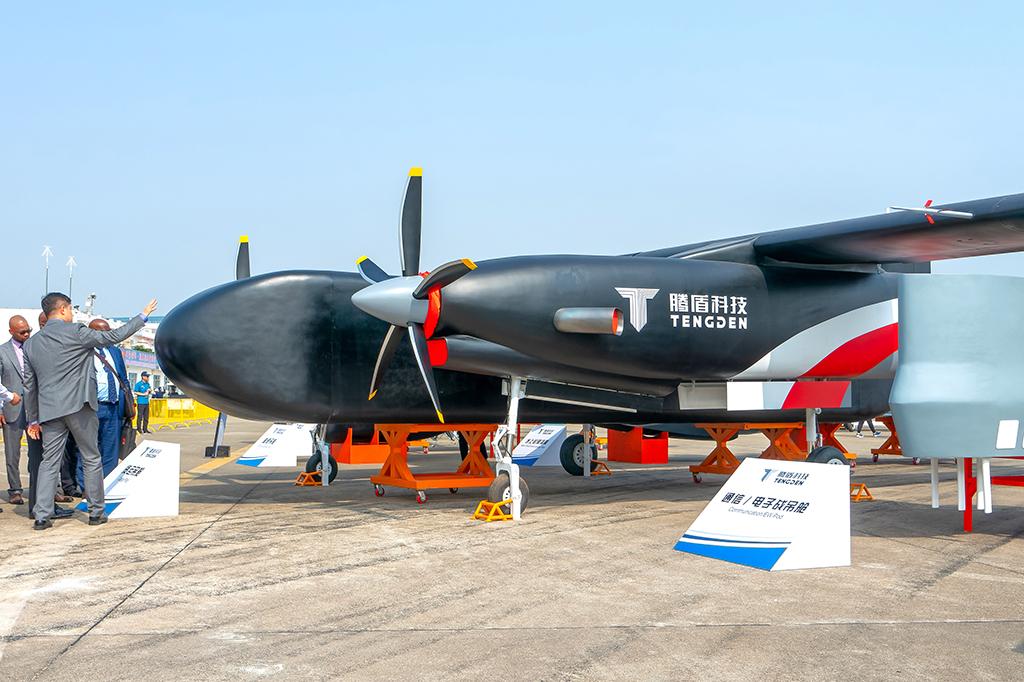 Sichuan Tengden Technology and Poly Technologies introduced the twin-engine TW356 unmanned aircraft, a flying frame to which a mission module is suspended between the turboprop engines. At the Zhuhai show, suspended next to an ordinary rectangular shipping container were alternative modules with the Balance Beam early-warning radar (the same as on the KJ-200 airplane) and electronic-warfare system. 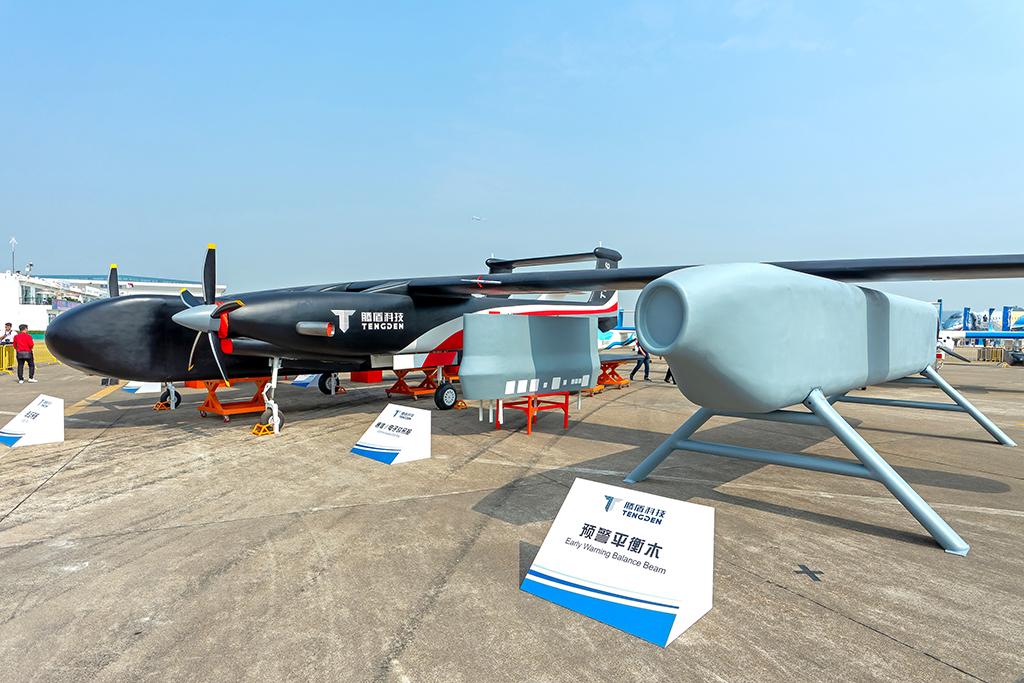 Sichuan Tengden Technology also introduced a model of a similar but much larger TW765 aircraft with a takeoff weight of 65 tons. The TW765 was advertised as the world’s largest unmanned aircraft under development. In the two years since the exhibition, no additional news has been forthcoming about these projects. 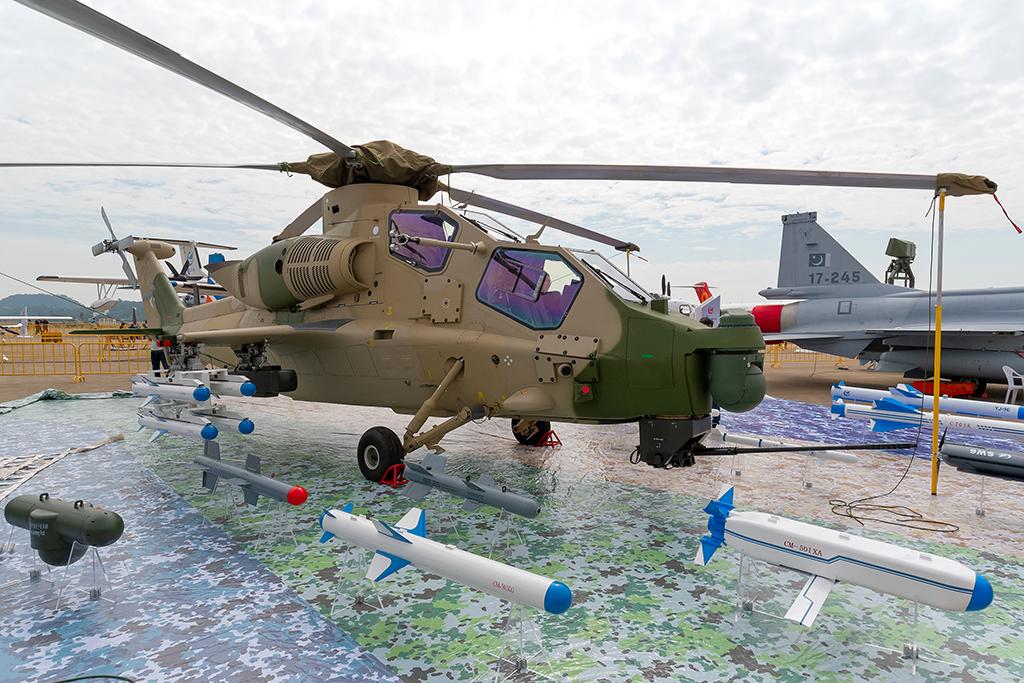 The Z-10ME gunship helicopter, modernized for export, features improved avionics, new engines with redesigned air intakes, and upward-facing exhausts, armor plates at the cockpit sides and missile-approach warning system sensors. The two weapons in the foreground are the CM-502KG air-to ground missile with a range of 25 km (16 mi.) and the 70-km-range CM-501XA loitering munition. 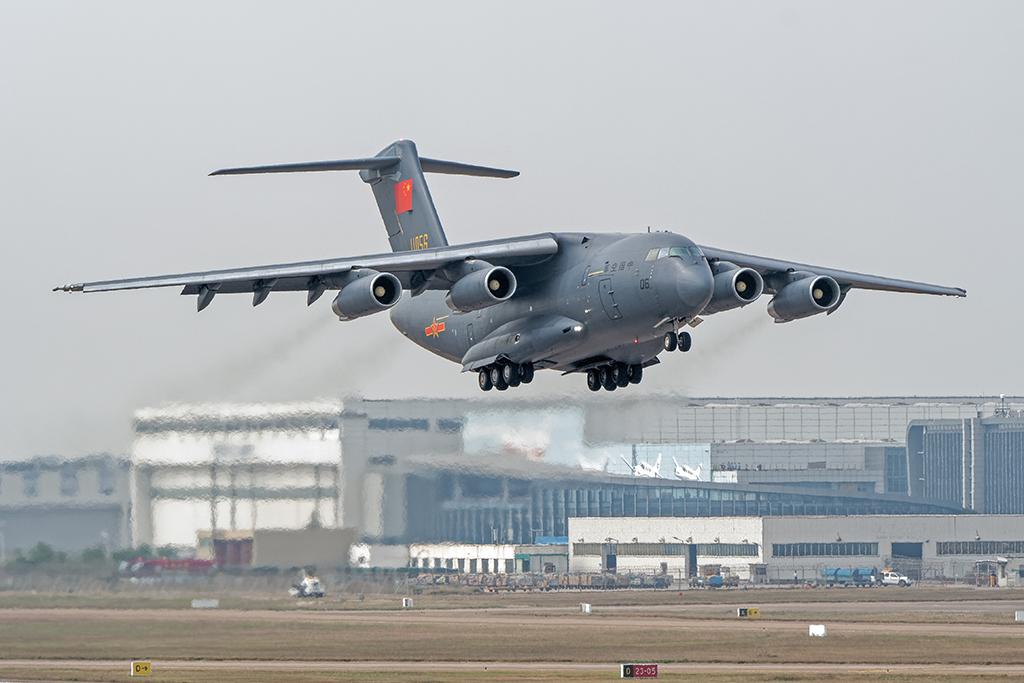 The Y-20 heavy transport aircraft was designed at the 603 Aircraft Design Institute in Xian in consultation with the Ukrainian company Antonov Design Bureau. It is produced by the XAC plant in Xian in collaboration with Sichuan Aerospace Industry Corp. in Shaanxi. 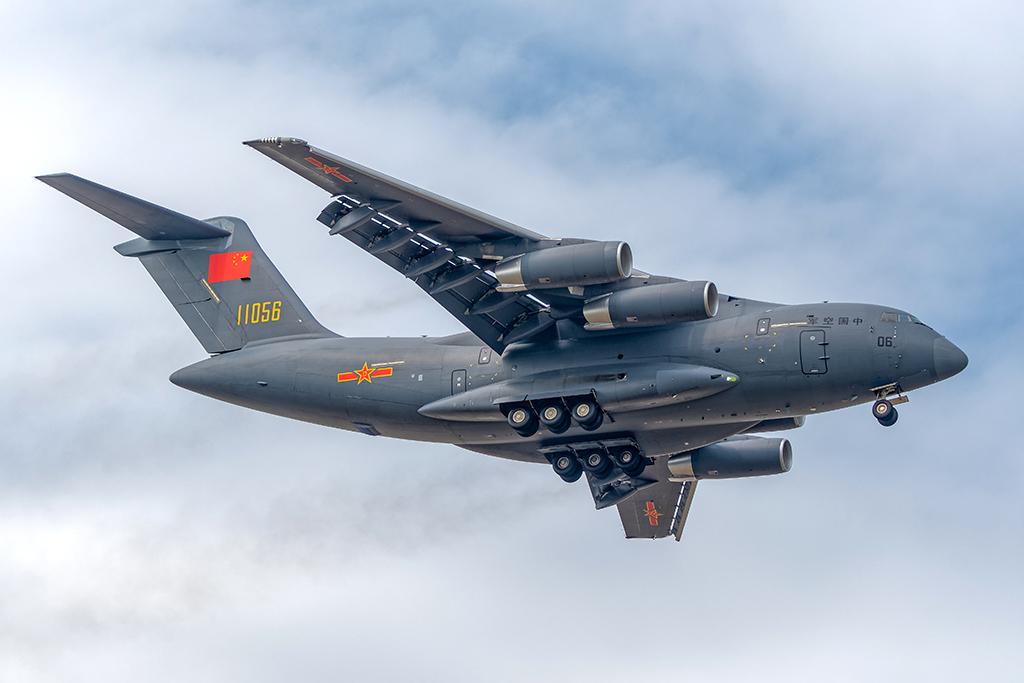 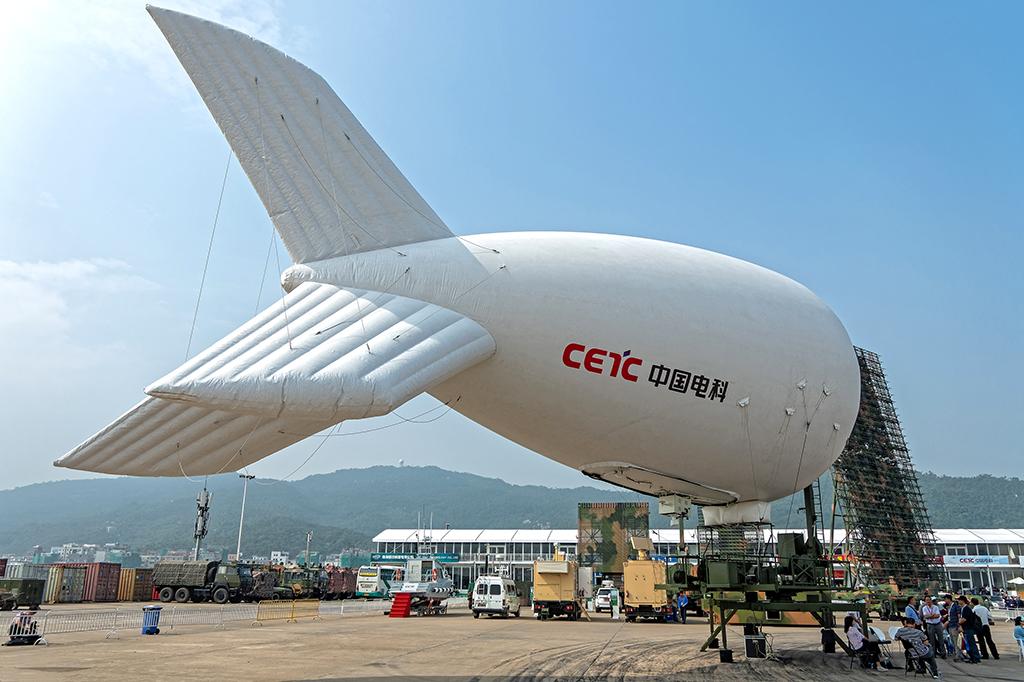 We do not often see aerostats at air shows. At the 2018 Zhuhai show, the China Electronics Technology Group Corp. showed a surveillance tethered aerostat similar in shape and size to the U.S. TCOM 17M tactical class aerostat. 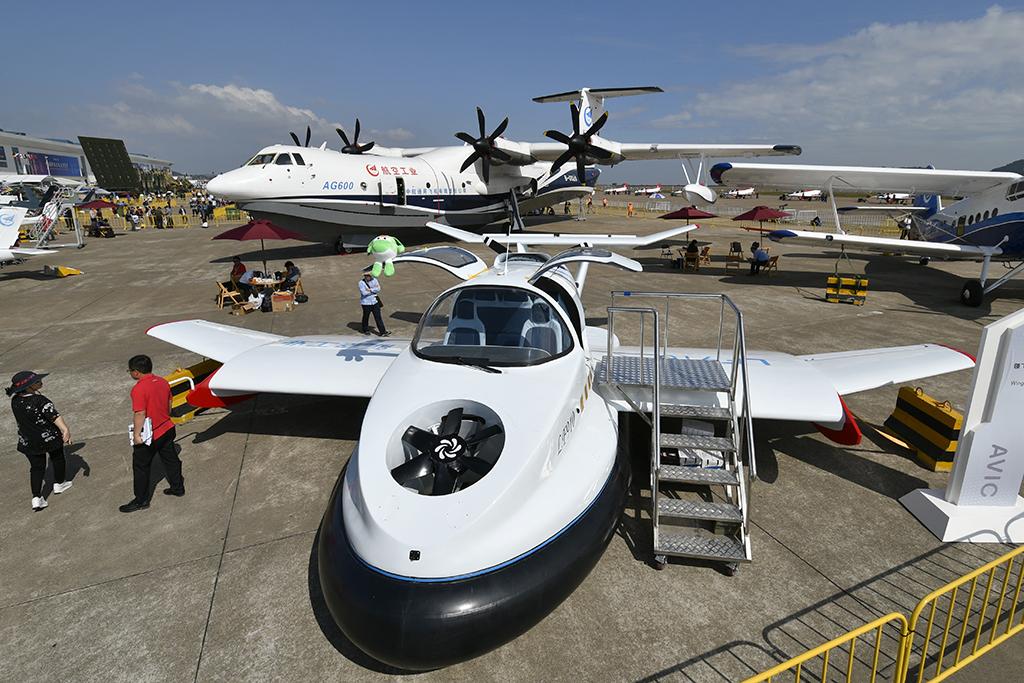 In every field, the Chinese aviation industry has its proposal, in combat aircraft ranging from light fighter to long-range bomber, regional to widebody communication aircraft, transport aircraft of various sizes, civilian and military helicopters, early-warning aircraft and a huge number of unmanned aerial vehicles. Here is a small Leading LF910 wing-in-ground-effect craft, and in the background, a AG600, the largest amphibious aircraft currently flying in the world. The AG600 amphibian was produced at the Zhuhai Yanzhou Aircraft Corp., located at the same airport where the exhibition is held. The first flight was made on Dec. 24, 2017. The manufacturer mentions only civilian applications of the aircraft, but the Chinese Navy may also be interested.

Take a look at the range of aircraft populating the Chinese military fleet.