“The week was upbeat, exciting and filled with many ‘Only at Oshkosh’ moments,” says EAA Chairman Jack Pelton. Among them: this lineup of airpower over the last 75 years, including a U.S. Air Force F-35 Lightning II and "Doc," one of the world’s two airworthy Boeing B-29 Superfortress bombers. 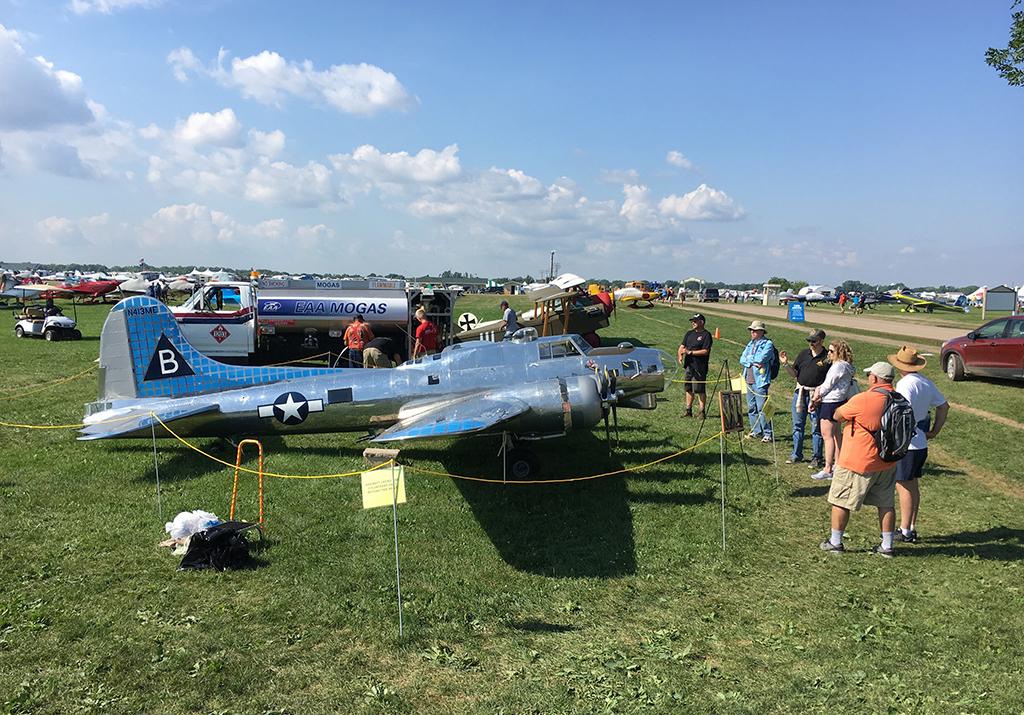 More than 2,979 aircraft were registered as showplanes (the second straight year over 2,900), including 1,160 home-built aircraft (up 5%). Among them: this one-third-scale home-built B-17 bomber. 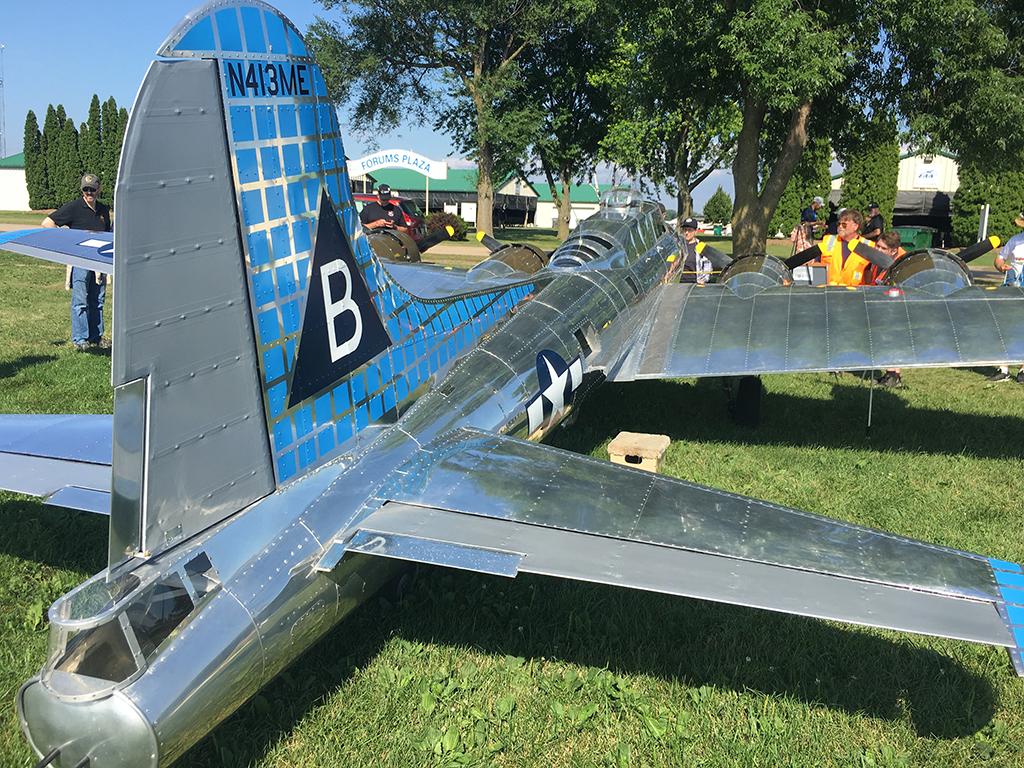 Jack Bally, of Dixon, Ilinois, won an EAA Special Award for Outstanding Accomplishment for designing and building his one-third-scale single-seat B-17G, a feat that took him nearly 18 years. The 34-ft.-wingspan aircraft is powered by four 85-hp Hirth F-30 two-cycle engines. 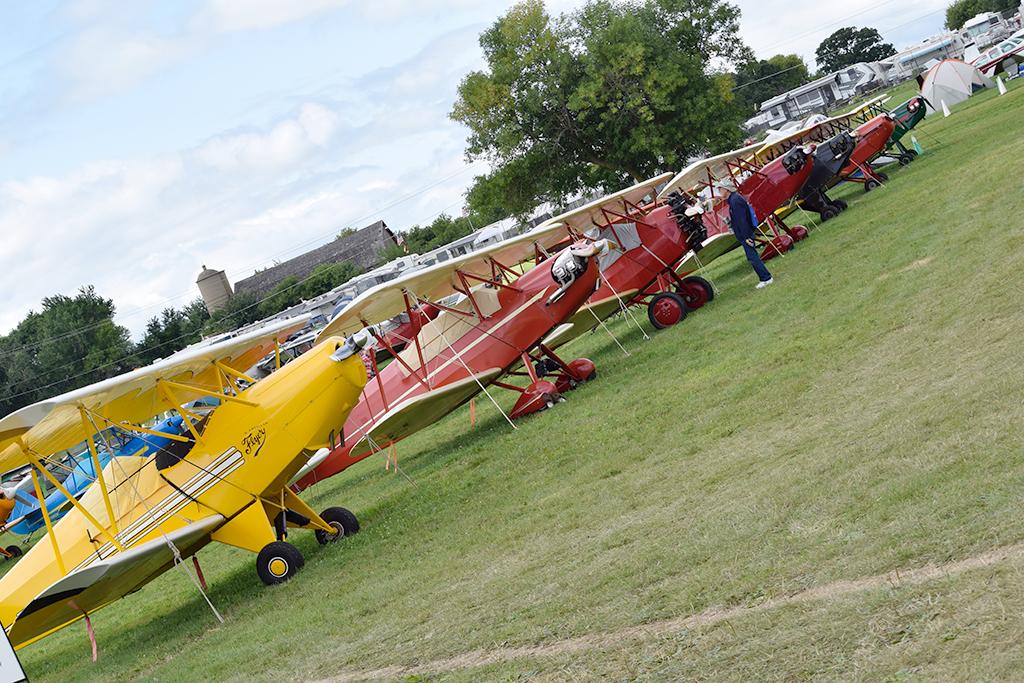 Hatz Off to Home-builders

At the other end of the home-built spectrum are the classic biplane designs. At least a dozen Hatzes, designed originally in 1968 as a smaller version of a Waco F vintage biplane, flew in to celebrate their 50th anniversary. 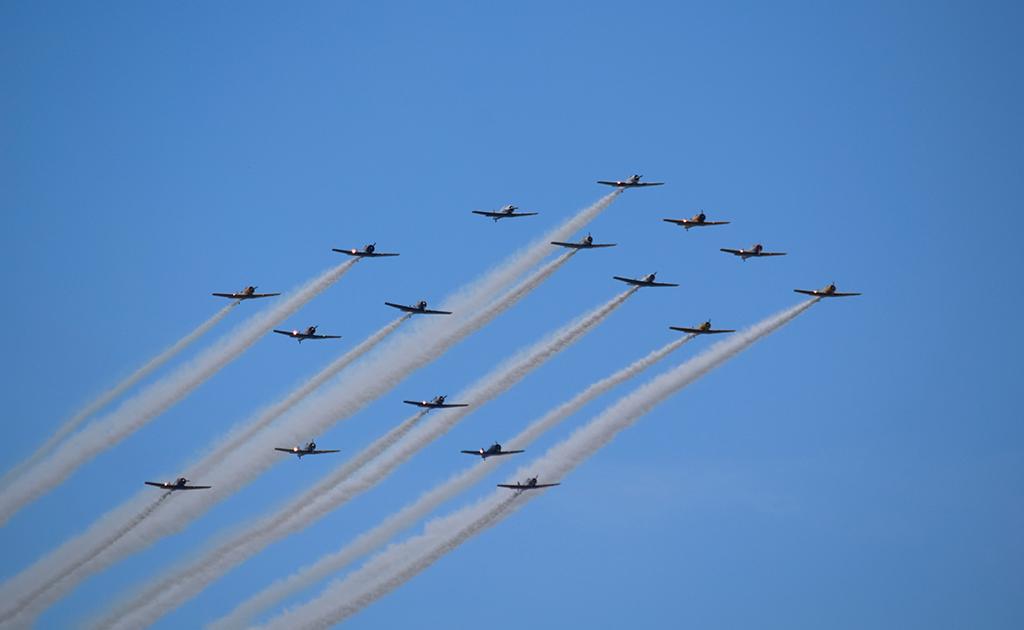 A total of  377 warbirds attended, up 7% from 2017. Many flew in massed formations, including these North American T-6 trainers celebrating the type’s 80th anniversary. 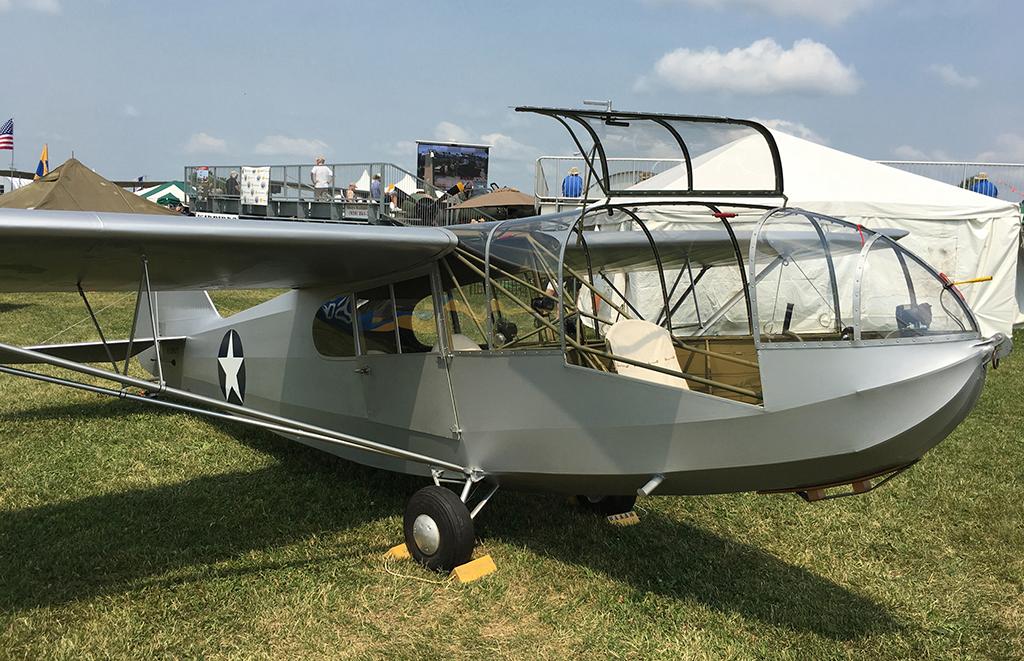 Basking quietly in the sun at Oshkosh were two rarely seen and oft-forgotten contributors to World War II: a pair of three-seat trainers that originate from Piper Cub and Taylorcraft L-2 airframes. Here the Taylorcraft TG-6 elementary trainer shows how a new nose and extra seat replaced the engine in the spotter plane. The glider also has redesigned landing gear and a modified tail. Many were converted back into powered L-2s after the war. 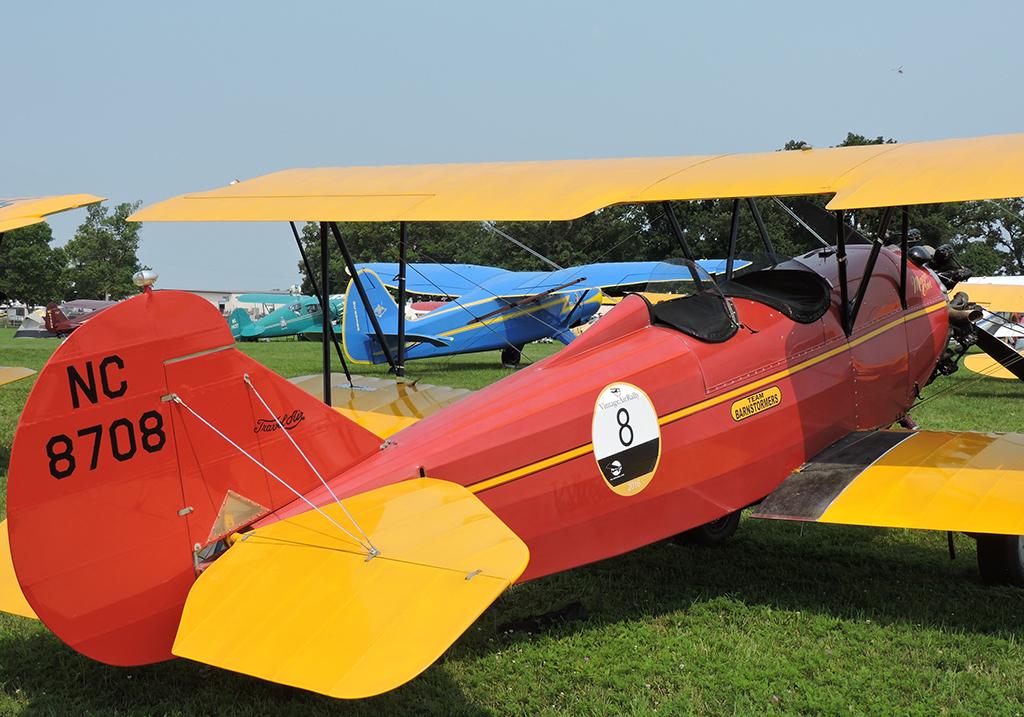 Vintage aircraft of all types were at Oshkosh—1,094 of them, in fact—including a number of rare Travel Air biplanes that are taking part in the 2018 American Barnstormers Tour. Here a Curtiss-Wright Travel Air D-4000 frames a Stinson Reliant. 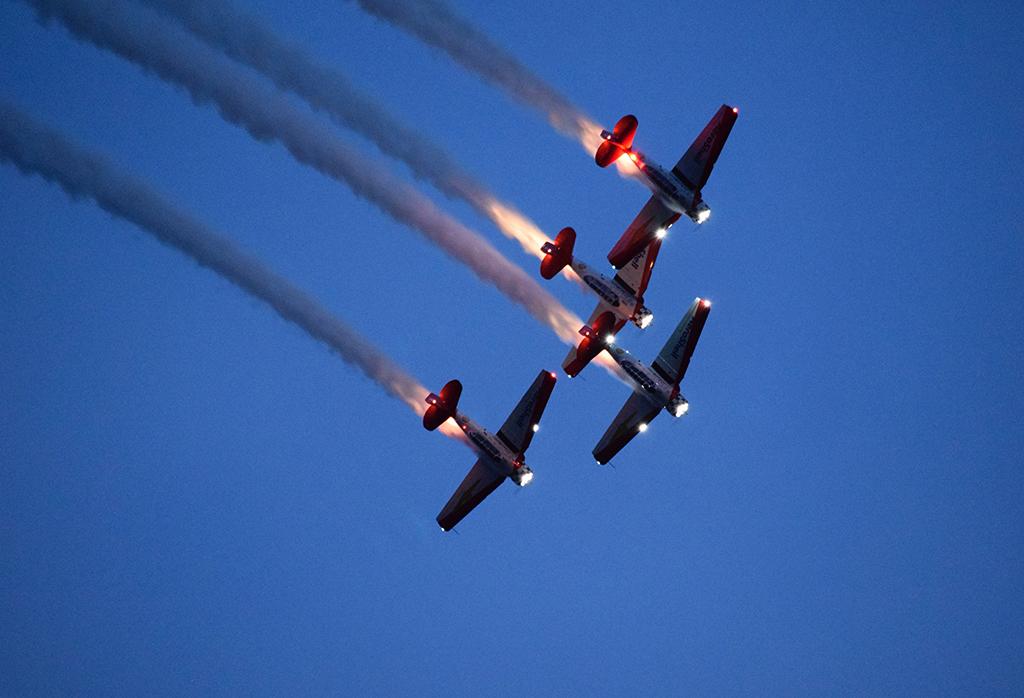 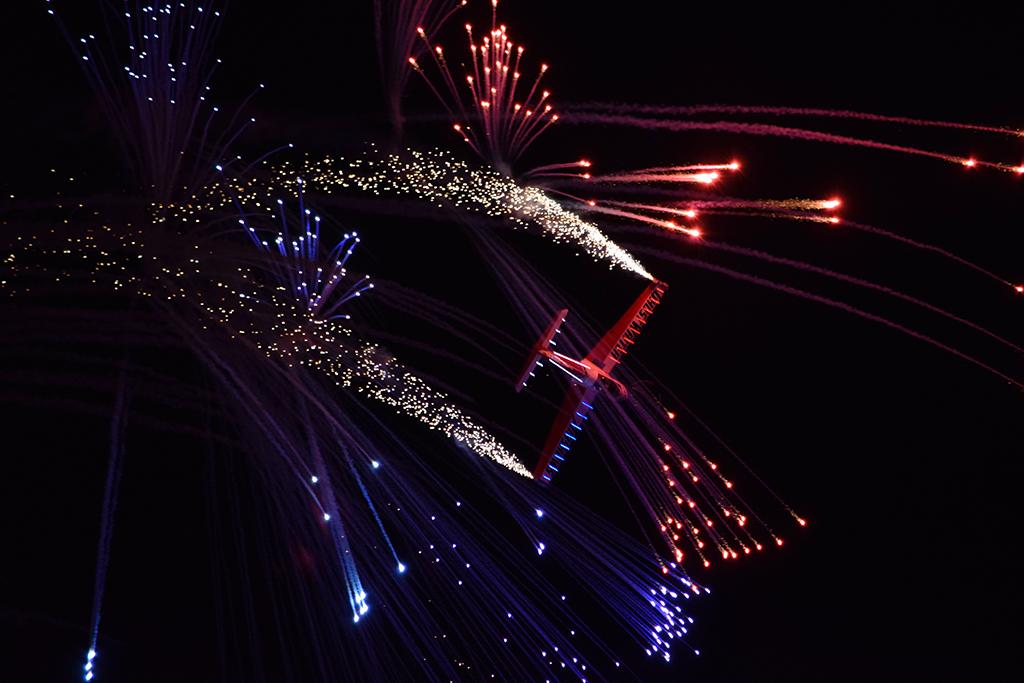 Nate Hammond fires off more than 200 lb. of pyrotechnics from his Super Chipmunk while performing in AirVenture’s dramatic night show. 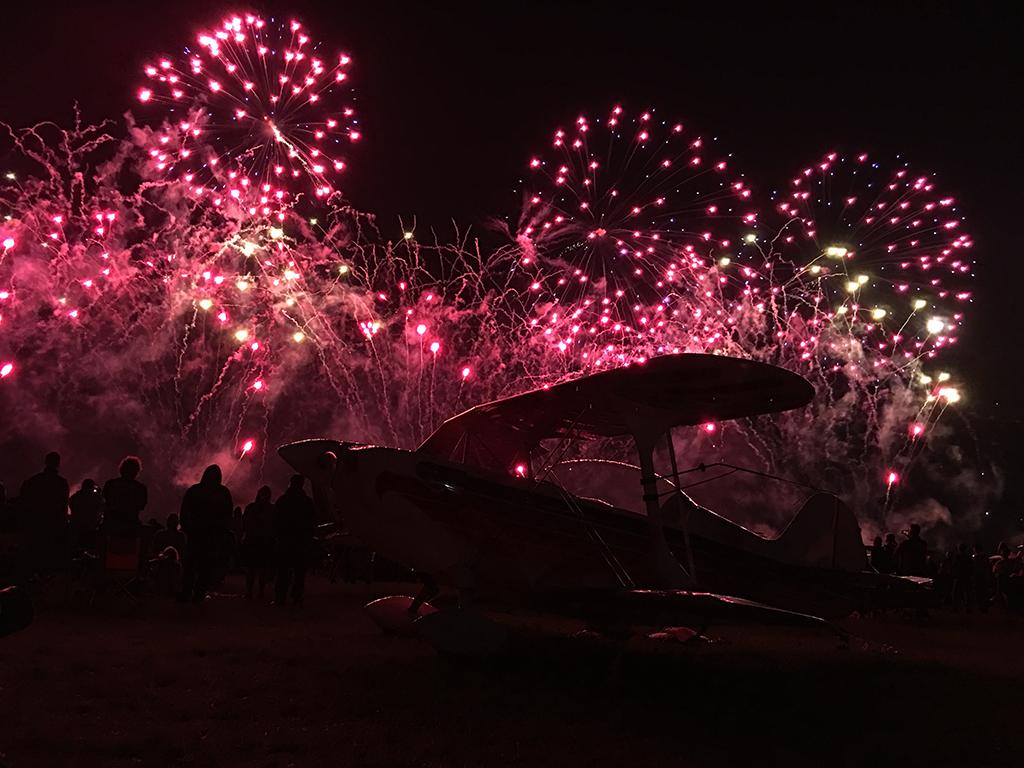 This year’s EAA AirVenture, the 49th to be held at Oshkosh, Wisconsin, set several new records including attendance of 601,000, up nearly 2% from the year before, despite the absence of a major jet aerobatic display team (the Blue Angels performed in 2017).

More than 10,000 aircraft arrived at Wittman Regional Airport in Oshkosh and other airports in east-central Wisconsin. At Wittman alone, there were 19,588 aircraft operations from July 20-30, an average of approximately 123 takeoffs/landings per hour during daylight, making it the busiest airport in the world over that period.

Many attendees paid for aircraft rides during the show: 2,800 flew aboard EAA’s two Ford Tri-Motors, while 3,032 rode EAA’s Bell 47 helicopters and 680 flew in EAA’s B-17 bomber "Aluminum Overcast."

The show attracted 867 commercial exhibitors and generated $170 million in business for the surrounding area, based on a 2017 University of Wisconsin Oshkosh economic impact study.