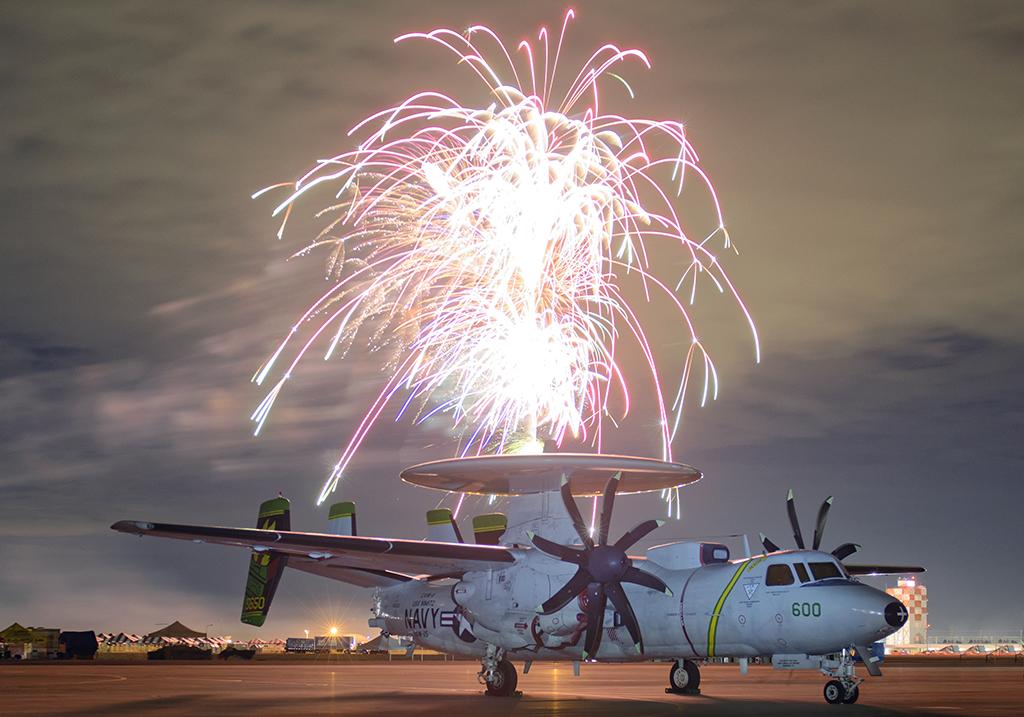 A U.S. Navy E-2C Hawkeye is seen in the California night under fireworks at NAS El Centro. 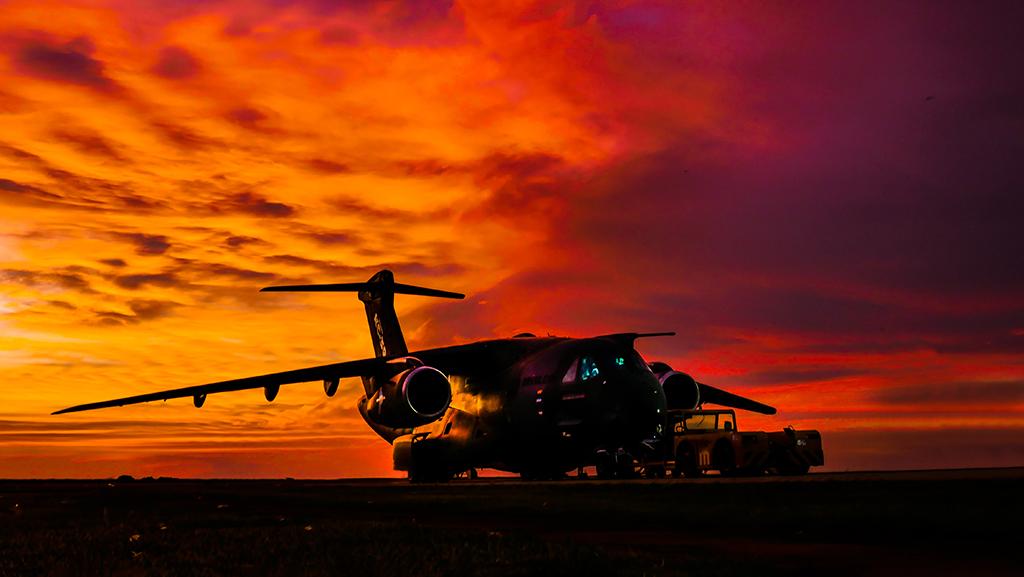 An Embraer KC-390 prototype sits on the ramp at sunset. 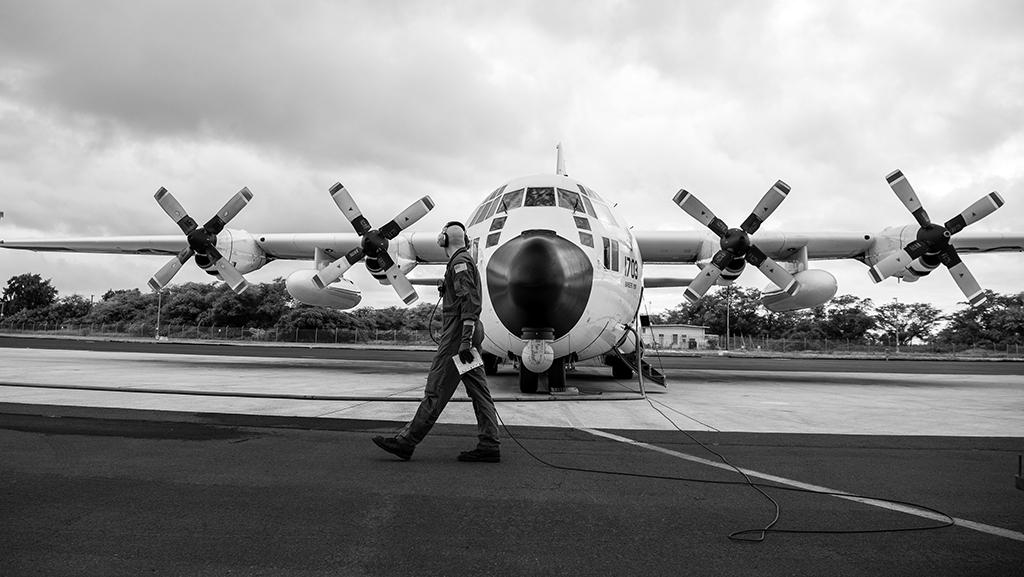 An aircrew member from U.S. Coast Guard Air Station Barbers Point, Hawaii, communicates with the pilots onboard an HC-130 during pre-flight startup. 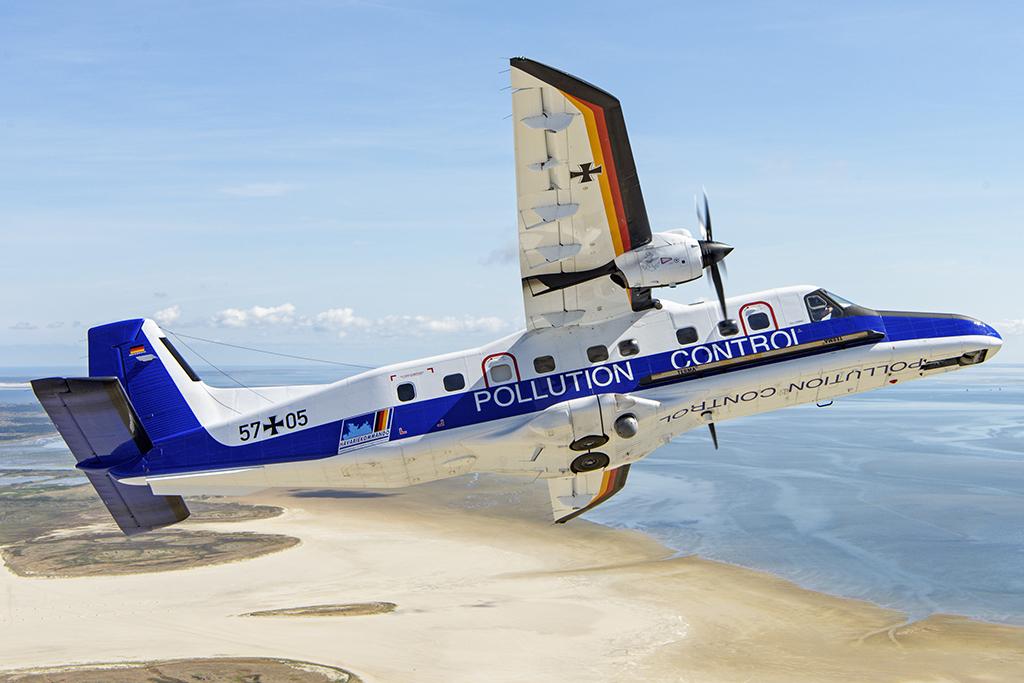 A German Navy Pollution Control Dornier 228NG is returning home after a visit to the airshow on the island of Texel; the many colors of the Wadden Sea provide a striking background. 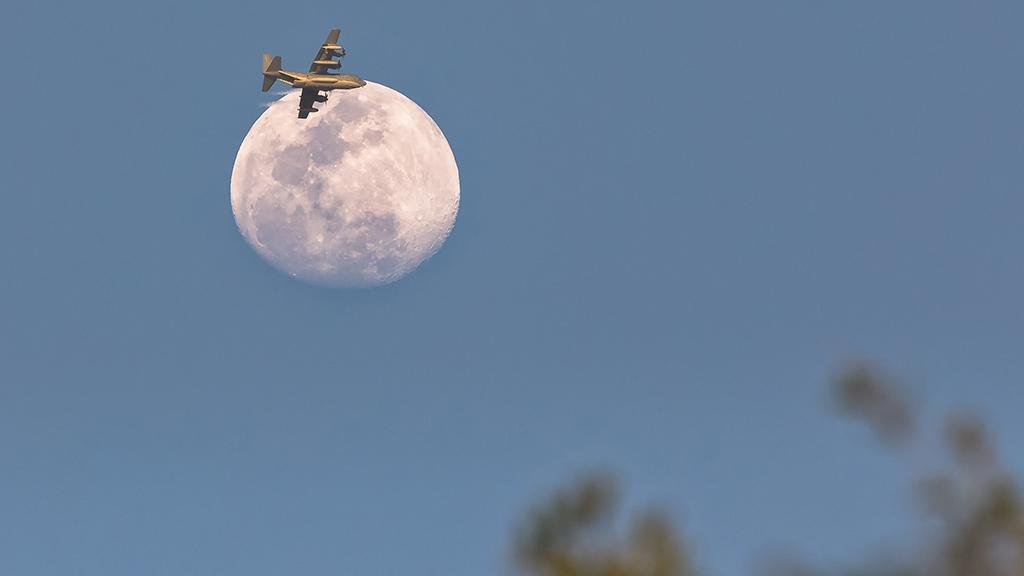 This HC-130 is part of the 920th Rescue Wing at Patrick AFB, Florida. On close observation, you can see that the cargo ramp is down. I was in my backyard trying to shoot the 89%-illuminated waxing gibbous Moon through the trees when this aircraft came into view. 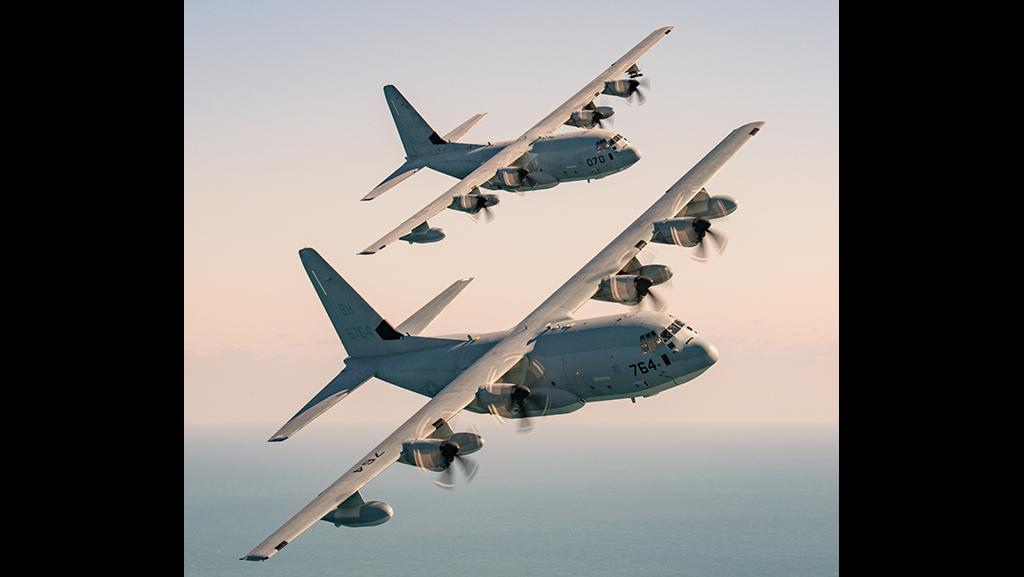 Taken off the North Carolina Coast during a formation training flight on March 22, 2018, these Lockheed Martin KC-130J Hercules were photographed to document and celebrate the 90th Anniversary of U.S. Marine Corps Aerial Refueler Transport Sqdn. VMGR-252. It  is the oldest continuously active squadron in the Marine Corps and is based at MCAS Cherry Point, North Carolina. 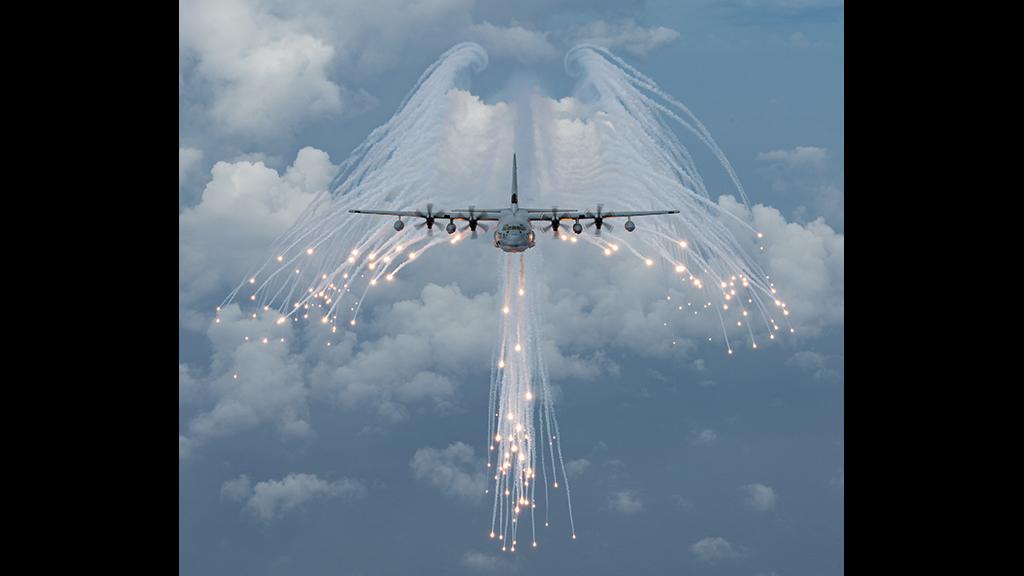 A Lockheed Martin KC-130J Hercules from the U.S. Marine Corps Aerial Refueler Transport Sqdn. VMGR-252 launches flares off the North Carolina Coast during a formation training flight on May 31. 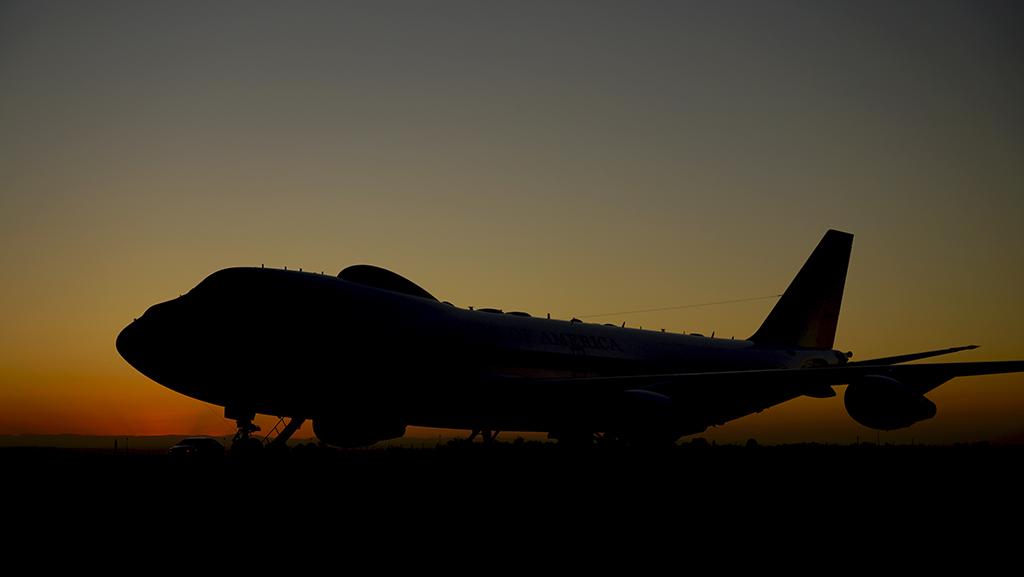 A Boeing E-4B seen at the Capital Airshow 2018, Mather Airport, Sacramento, California. The  E-4B, based on a former Boeing 747-200B, serves as the advanced airborne command post. 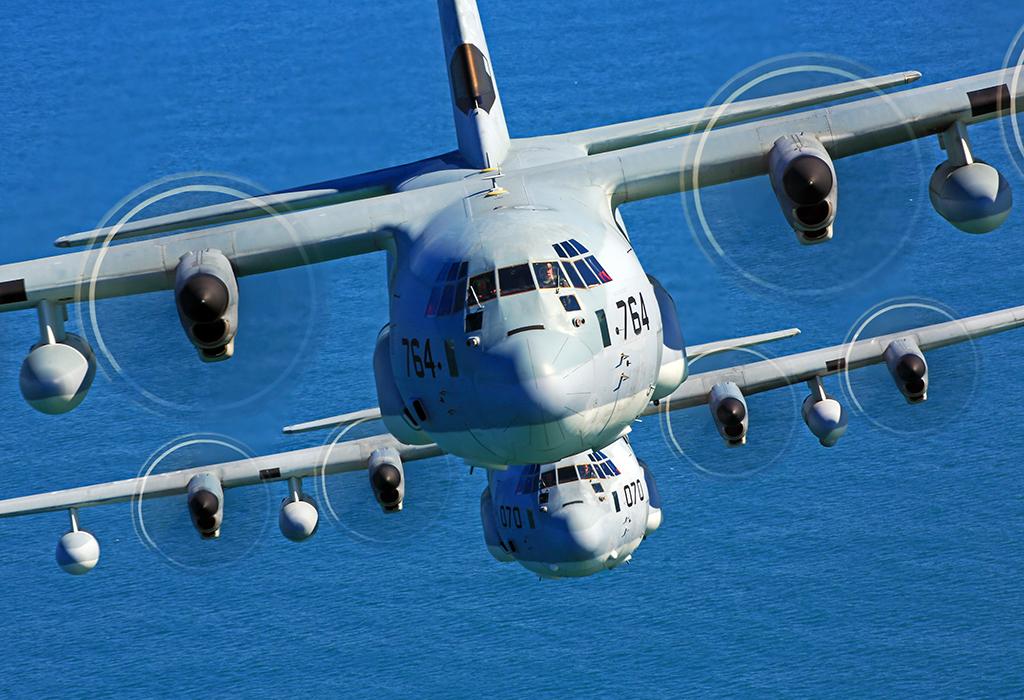 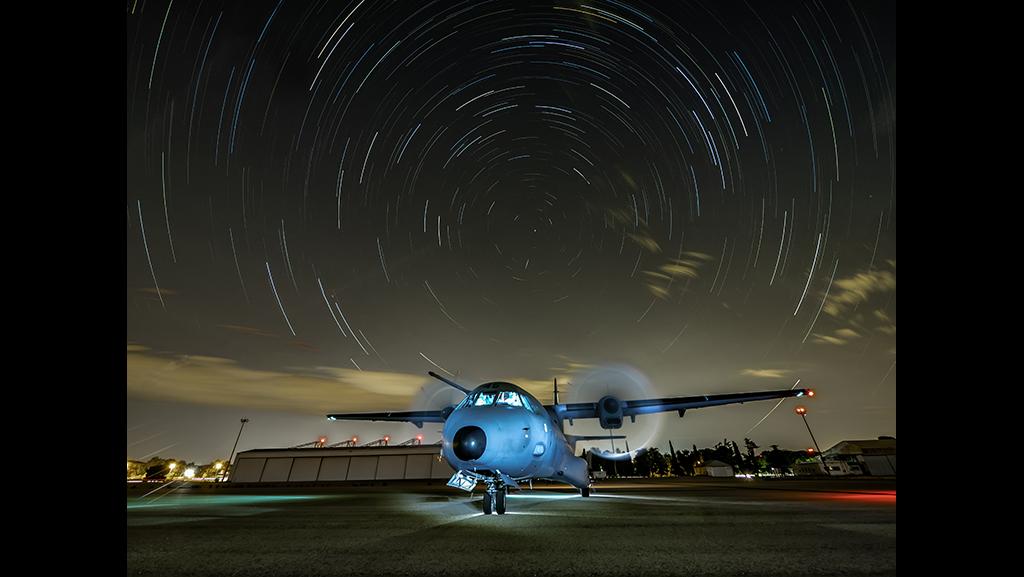 Astrophotography techniques were used to obtain the circumpolar sky in a single photograph highlighting this Spanish Air Force EADS C-295 at Getafe Air Base near Madrid.

Photographers captured shots of military aircraft at air shows and air bases. Some are in flight or static, framed by fireworks—either nature's or manmade.