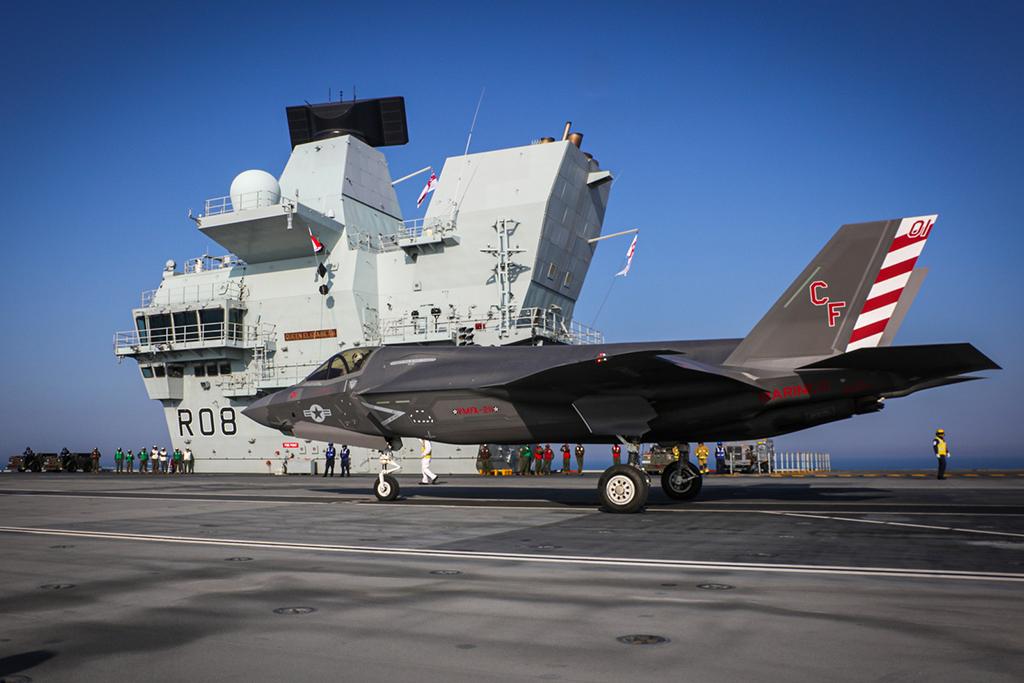 Yuma, Arizona-based U.S. Marine Corps Fighter Attack Sqdn. (VMFA) 211, also known as the Wake Island Avengers, is the Marine Corps unit currently deployed to the UK to embark on HMS Queen Elizabeth. The unit arrived at RAF Marham, England, the UK’s main F-35 operating base, on Sept. 4. They have been training there with the UK’s single frontline unit, 617 Sqdn., known as the Dambusters. VMFA-211 was the second Marine Corps operational squadron to operate the F-35. Credit: Mark Johnson/Royal Navy 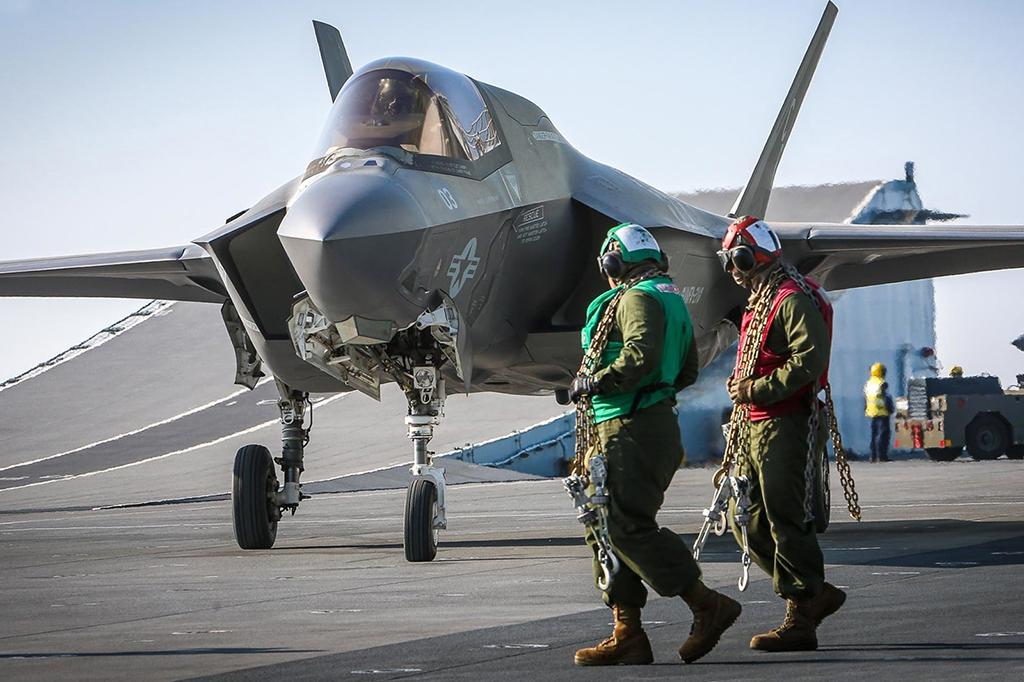 The U.S. Marine Corps and their counterparts in the Royal Navy and Royal Air Force are working together to run the flight deck operations for the embarkation. Out of the 14 F-35s on board, 10 belong to the Marine Corps and the other four are the UK’s. But the British fleet is bolstered by a complement of Royal Navy Merlin Mk. 2 anti-submarine helicopters and Mk. 4 utility helicopters. Credit: Lt. Zachery Bodner/U.S. Marine Corps 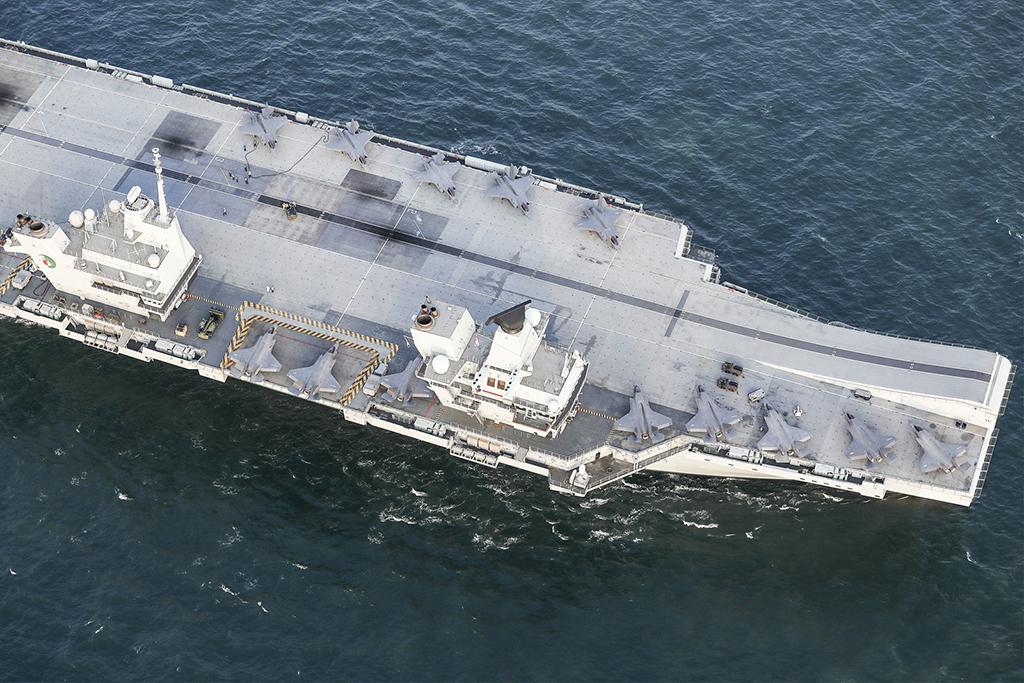 This aerial view shows the stark difference for the Marine pilots operating from the Queen Elizabeth, rather than the flat-deck amphibious assault ships they normally operate from. The British carrier is fitted with a ski jump designed to help aircraft get airborne with higher weapon and fuel loads than would be possible with a flat deck. VMFA-211 pilots have been preparing to operate from the ski jump using simulator training. Video released by the UK Defense Ministry reveals several takeoffs have already been performed. Credit: Belinda Alker/Royal Navy 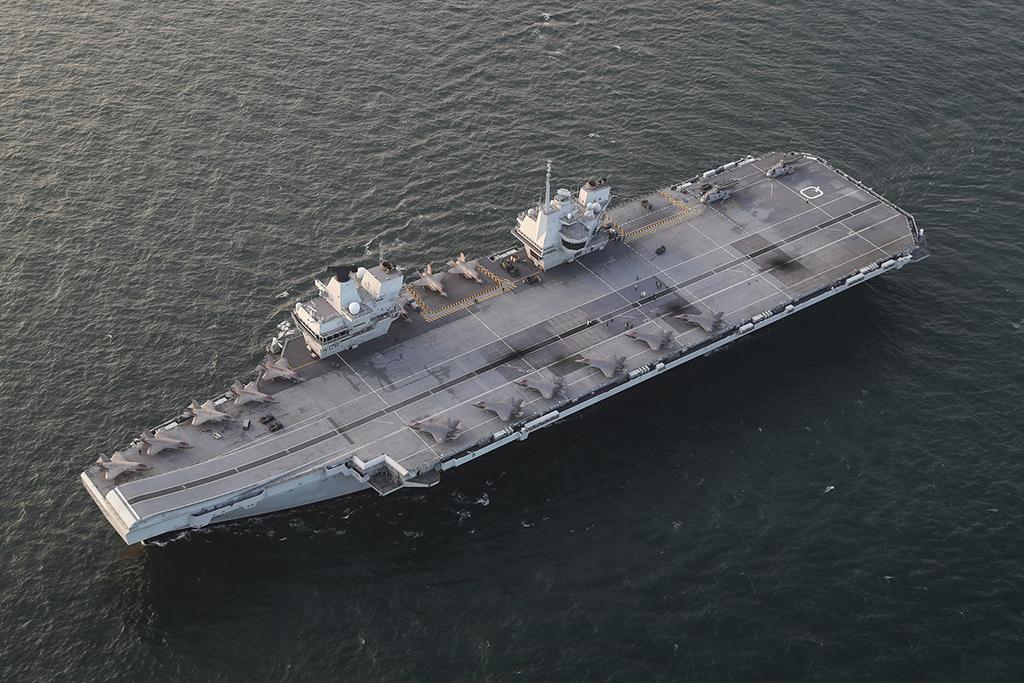 Even with 14 F-35s on board, loosely parked as pictured, the Queen Elizabeth still has significant area left over for aircraft parking and operations—not to mention hangarage below decks for maintenance. Each of the ship’s two deck elevators can carry two aircraft at any one time. The UK’s ambition is to be able to populate the ship with up to 24 UK F-35s, which could be joined by an additional 12 aircraft from F-35B operating nations. Credit: Belinda Alker/Royal Navy 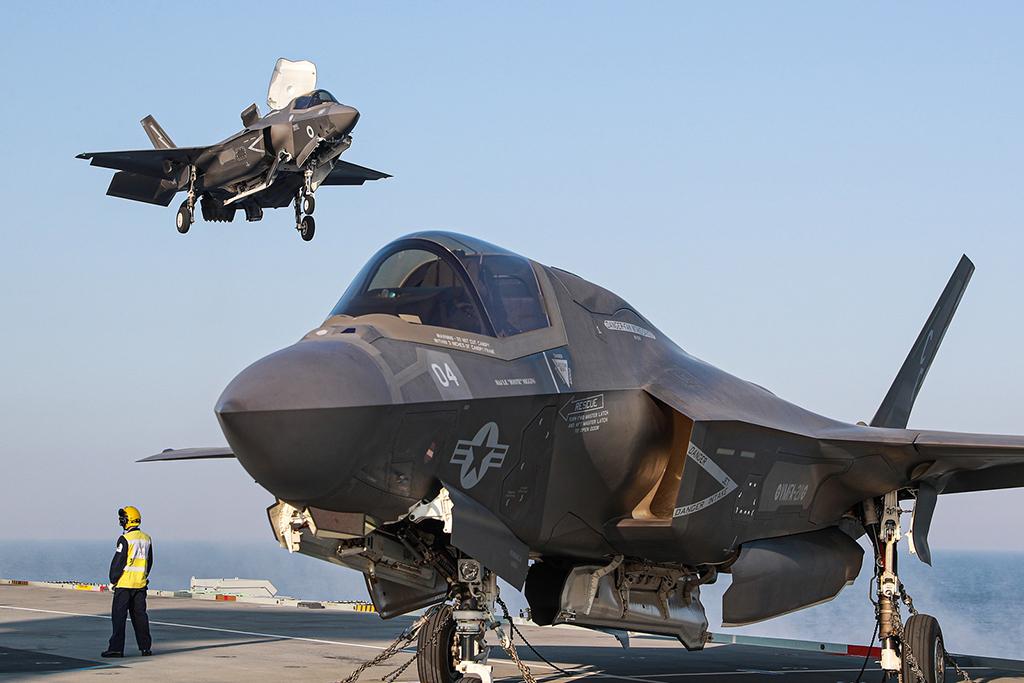 The U.S. Marine Corps and the UK’s Lightning Force already have a close relationship around F-35 development and training. Many of the UK’s F-35 pilots and ground crew trained with the corps’ training unit Marine Fighter Attack Training Sqdn. 501 at the MCAS in Beaufort, South Carolina. Now, they will work together operationally: Marine Corps F-35s will accompany HMS Queen Elizabeth on its first operational cruise, called Carrier Strike Group 2021, expected to set sail to the Far East next May. Credit: Mark Johnson/Royal Navy 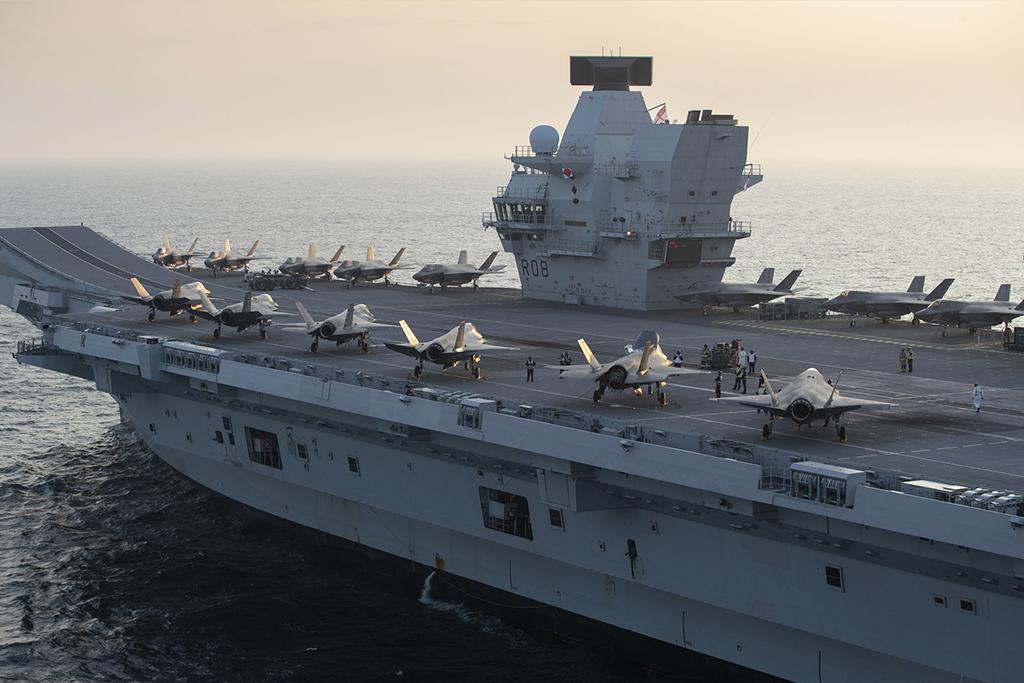 While on board HMS Queen Elizabeth, the UK and U.S. F-35s will participate in the NATO maritime exercise Joint Warrior. The exercise calls for the carrier to be joined by six Royal Navy destroyers, frigates and auxiliaries, as well as by warships from the Royal Netherlands Navy and U.S. Navy. The joint training will help pave the way for the UK to be able to declare an initial operational capability for F-35 operations from the carrier at the end of 2020. Credit: Belinda Alker/Royal Navy

British and U.S. Marine Corps Lockheed Martin F-35s have embarked on HMS Queen Elizabeth, the first of the UK’s two new 65,000-ton aircraft carriers. The 14 aircraft gathered on the ship’s flight deck on Sept. 22 is the largest embarkation at sea of the stealthy fifth-generation fighter yet, and marks the beginning of regular deployments by the Marine Corps on UK carriers. A 15th F-35 arrived on Sept. 24. British officials are hoping that images like these (photographed by Royal Navy and U.S. Marine Corps photographers) will finally put to bed the oft-uttered notion that the Queen Elizabeth-class ships are carriers without aircraft.