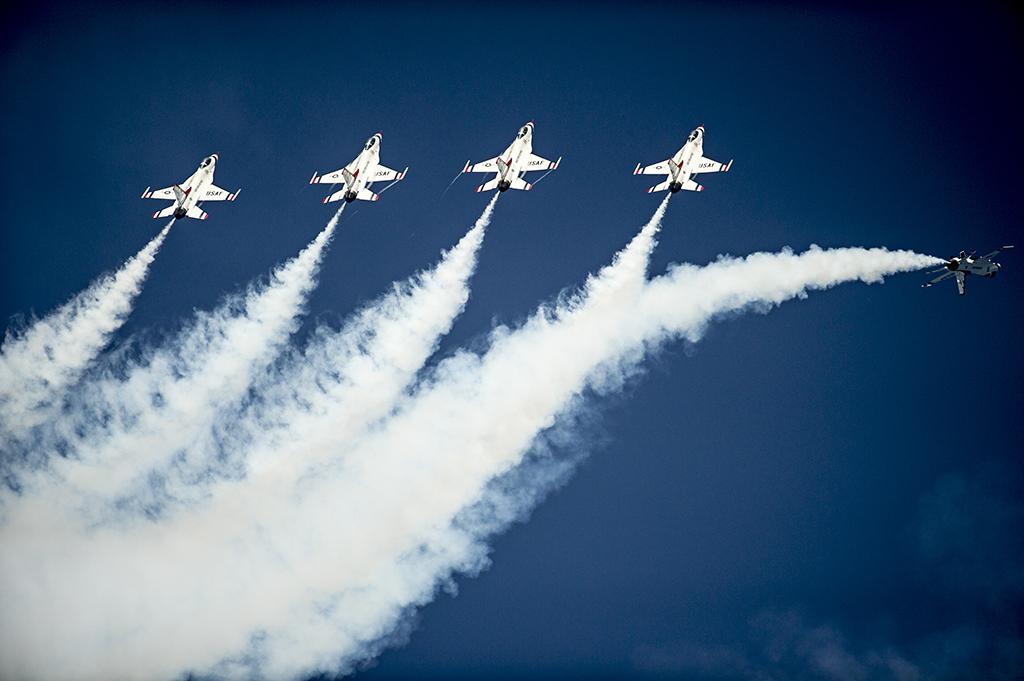 The Thunderbirds demonstration team performs the Line Break Loop maneuver, which the demo team added to its 2021 show along with the Stinger Break Cross. 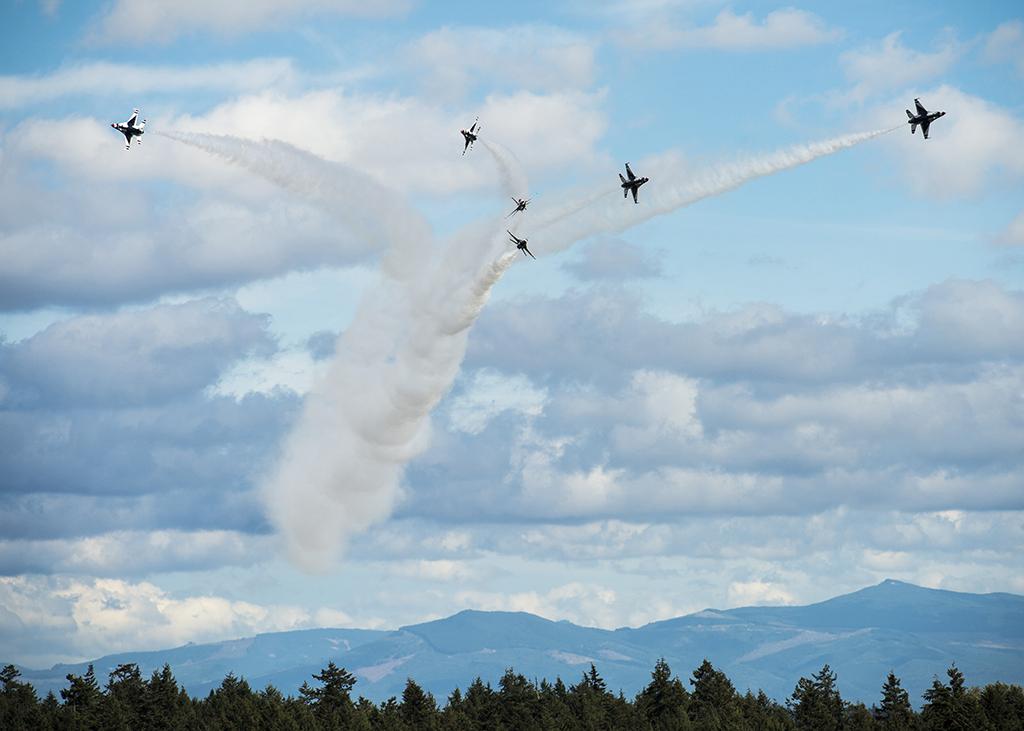 The Thunderbirds perform the Low Bomb Burst maneuver, which the demo team added to its 2021 show along with the Low Bomb Hit maneuver. 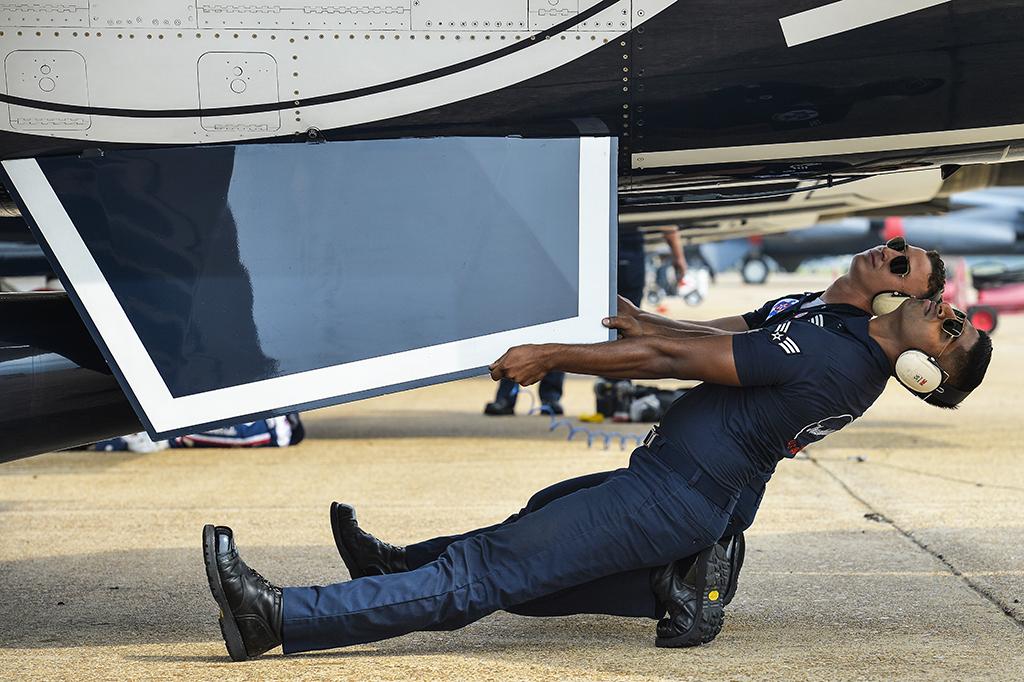 Two airmen accomplish end-of-runway checks on a Thunderbird F-16. The Thunderbirds have redesigned their 2021 air show because, “a lot of times we realized that our demonstrations can become a series of athletic maneuvers more like the Harlem Globetrotters, as opposed to a Cirque du Soleil performance,” says Thunderbird 1 Commander Col. John Caldwell. 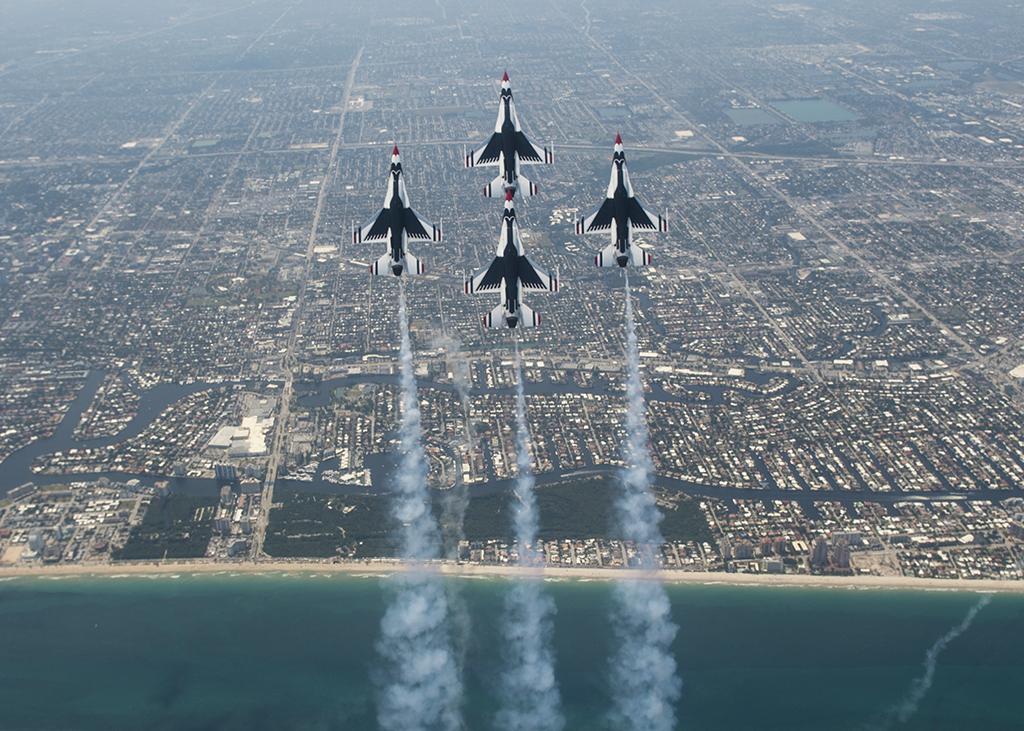 The Thunderbirds perform the Line to Diamond Loop maneuver during practice. This is one of six maneuvers the Thunderbirds removed from their 2021 show. 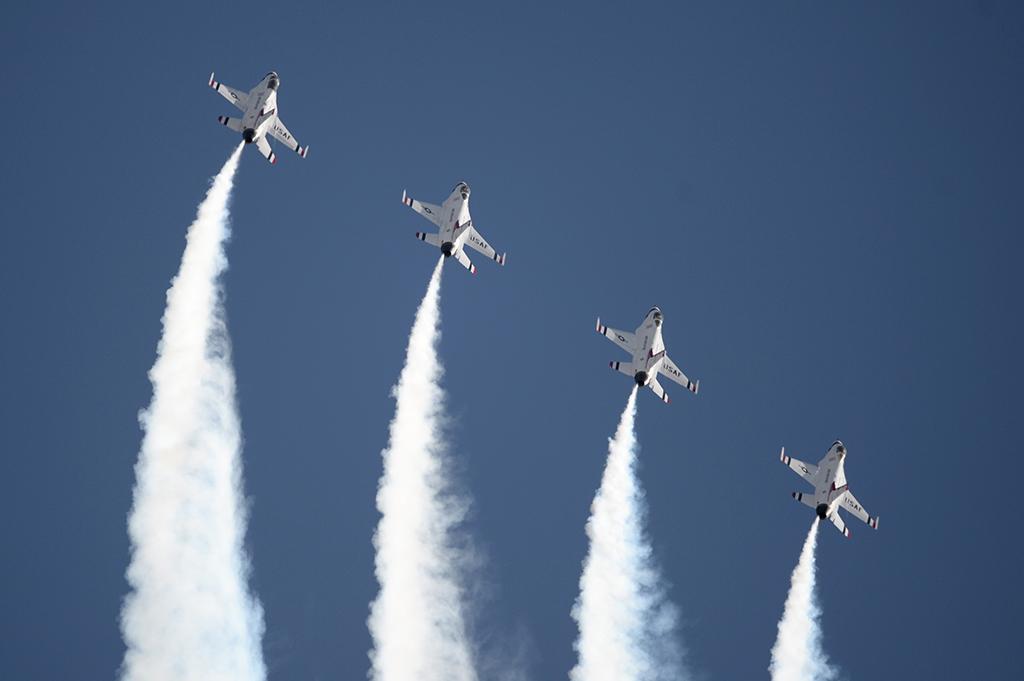 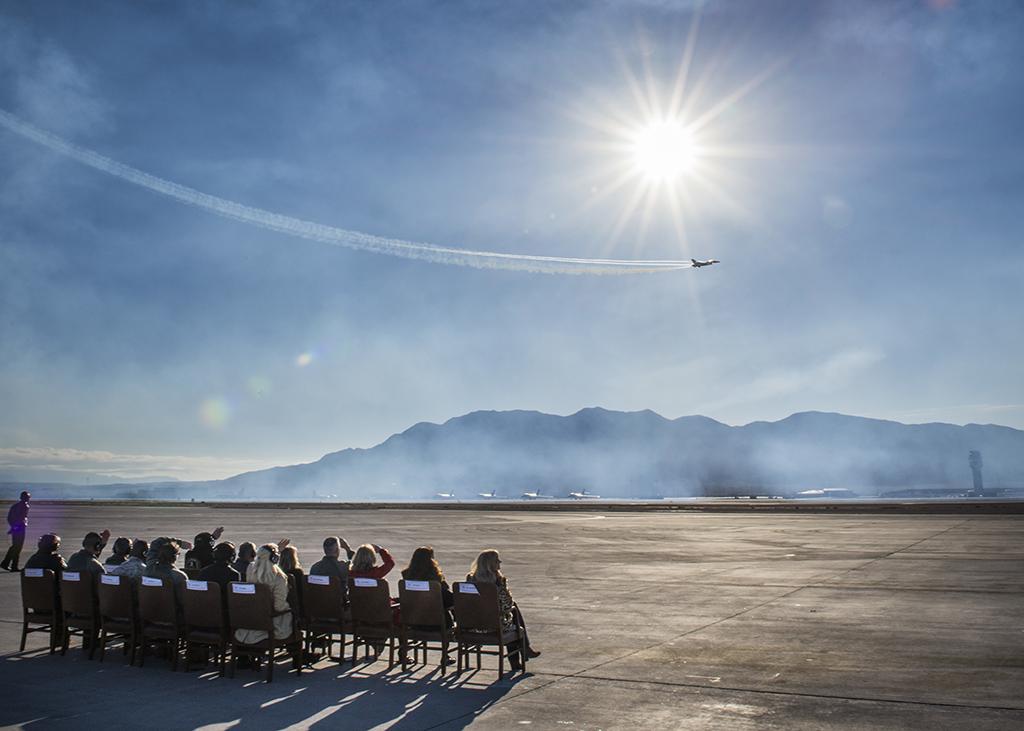 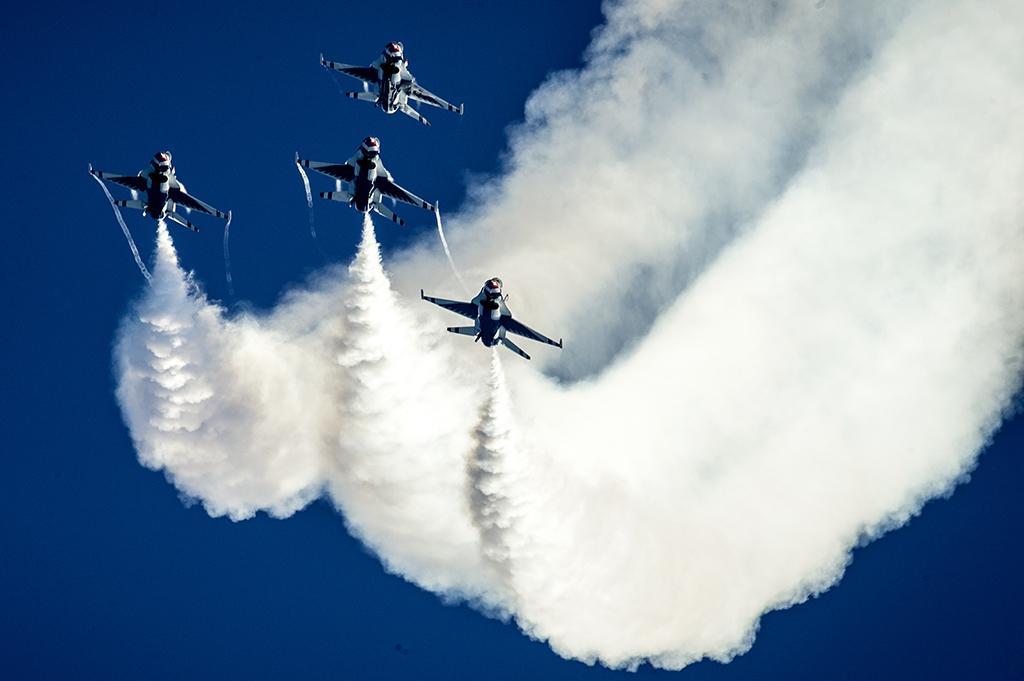 Thunderbirds perform the Arrowhead Loop maneuver over Daytona Beach in Florida. This is one of six maneuvers the Thunderbirds removed from their 2021 air show season. 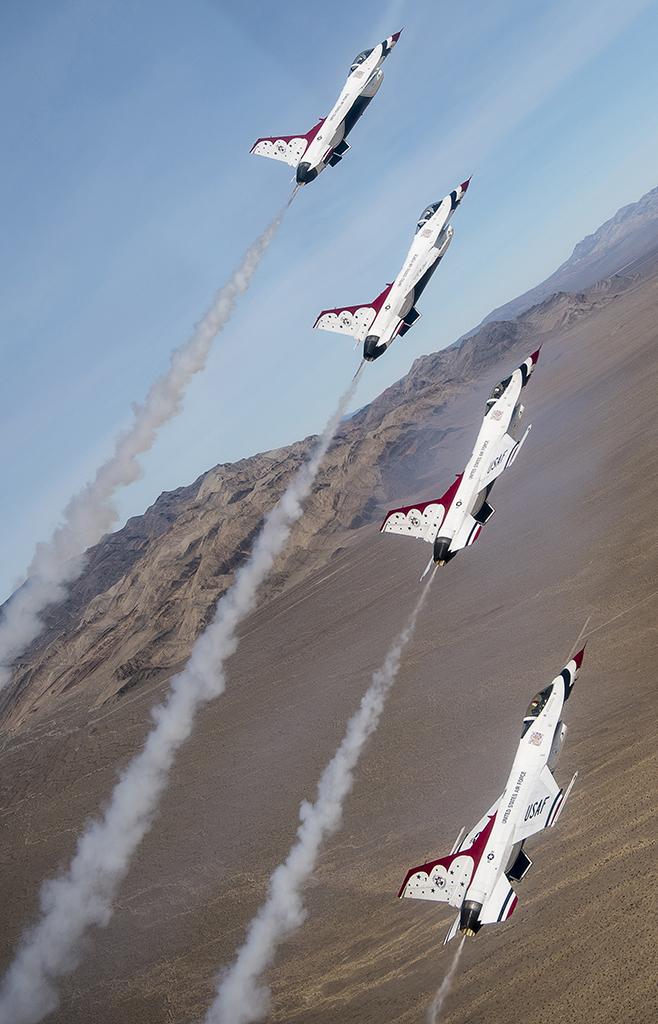 The Thunderbirds perform the Trail to Diamond Roll maneuver over the Nevada Test and Training Range, removed from their 2021 show.

For the first time in 38 years, the U.S. Air Force Thunderbirds are altering the show for the 2021 season. The flight demonstration team had to cancel its 2020 air show season because of the spread of the novel coronavirus, and they pivoted and focused on saluting first responders and revising their existing demonstration routine. As a result of the COVID-19 pandemic, Thunderbird leadership had time to redesign the show, to be shorter and more engaging. They consulted with former Disney executives and even the rival U.S. Navy Blue Angels on how to produce new new demonstration.

This is only the second time the Thunderbird routine has gone through a complete overhaul since the team's creating in 1953. The group revised its demonstration to include the F-16 in the aftermath of the 1982 Diamond Crash, which resulted in four pilot fatalities. The 2021 season kicks off with the Cocoa Beach Air Show in Florida on April 17-18. Viewers can expect a 50-minute demo instead of the previous 90-minute routine. The Thunderbirds removed six of the more repetitive maneuvers from the air portion and tightened the ground show.