On Aug. 24, 1996, a Burkhart Grob G-115D experienced an inflight breakup over Dupuis Reserve near Indiantown, Florida, during a local aerobatic instructional flight. Both flight instructors were fatally injured. Parts of the aircraft were widely scattered, which indicated the inflight breakup. The first item in the line was the top of the rudder; the lower portion of the rudder was never found. The stabilizer and both elevators were found 900 ft. from the main wreckage. The only part of the airplane left intact was the left aileron.

Maintenance logs revealed that the airplane had been repainted 96 flight hours before the flight, but the flight control surfaces had not been rebalanced. Grob specifications permitted a hinge moment range of -0.22 foot-pounds (meaning that the aileron was leading-edge heavy) to 0.074 foot-pounds. The hinge moment of the retrieved aileron was between 0.138 and 0.200 foot-pounds, considerably “tail-heavy” and outside of factory specifications.

Samples of the exterior skin were examined for paint thickness to evaluate the balance and residual hinge moments for the remaining flight control surfaces. The test determined that all control surfaces were not in compliance with Grob’s specifications. The NTSB determined the probable cause of the accident was “failure of maintenance personnel to rebalance the flight controls after the airplane had been repainted, which resulted in rudder flutter and inflight breakup of the airplane.”

Getting Outside of the Aircraft’s Envelope

A review of the NASA ASRS and NTSB reports found other maintenance test flights in which the aircraft proceeded outside of its normal flight envelope while the crew was checking flight controls. During a test flight at Salina, Kansas, on June 12, 2001, a Learjet 25D encountered an elevator system oscillation while in a high-speed dive. The aft elevator sector clevis fractured due to reverse bending fatigue caused by vibration, resulting in a complete loss of elevator control. The flight crew reported that pitch control was established by using horizontal stabilizer pitch trim. They stated that during final approach the aircraft's nose began to drop and the flying pilot was unable to raise it using a combination of horizontal stabilizer trim and engine power. The Learjet landed short of the runway, striking an airport perimeter fence and a berm. The aircraft was destroyed and the two pilots were seriously injured. The NTSB determined the probable cause was the pilot in command's delayed remedial action during the elevator system oscillation, resulting in the failure of the aft elevator sector clevis due to reverse bending fatigue caused by vibration, and subsequent loss of elevator control.

One of the most dramatic departures from the aircraft’s flight envelope during an NRFO flight occurred on May 4, 2006, to a Hawker 800A during a maintenance test flight northwest of Lincoln, Nebraska. The aircraft had just come out of extensive maintenance and refurbishment. On board the flight were two Raytheon test pilots and four passengers that Raytheon considered crucial for the test flight. The first maneuver to be performed was a clean stall. Prior to the flight the crew calculated the stick shaker activation speed to be 115 kt., pusher speed at 107.5 kt., and that aerodynamic buffet speed would occur at 105.5 kt. The aircraft was level at 17,000 ft. MSL with the autopilot engaged in altitude hold and heading hold modes. As it slowed to approximately 126 kt., the right wing suddenly stalled, the nose dropped through the horizon and the aircraft continued to roll to the right in a near-vertical descent. The Hawker entered a cloud layer below them and, due to the attitude of the aircraft, the gyros tumbled. The crew was unable to determine the attitude of the aircraft until they exited the cloud layer. The aircraft continued to roll to the right, about three turns in total, when it experienced a rapid roll reversal to the left. It rolled about two to three turns to the left. When they exited below the base of the cloud layer, the captain saw only ground through the windshield and immediately pulled back on the yoke and regained control at approximately 7,000 ft. MSL. The crew returned to Lincoln Airport (KLNK), declared an emergency and made a no-flap landing on Runway 36.

The subsequent investigation discovered that the crew had difficulty locating an area that was in visual meteorological conditions to perform their stall tests. Two passenger statements mentioned that they saw ice on the leading edge of the wings. During their interview the crew stated that they never activated the TKS anti-icing system. Due to the absence of any malfunction with the aircraft systems, any abnormal flight characteristics after test flight, and the addition of statements from passengers and another pilot, it is possible that the wing of this aircraft was contaminated with ice during the stall. The aircraft flight manual (AFM) states that the clouds should be at least 10,000 ft. below the aircraft prior to stalls, the autopilot disengaged, and that stalls not to be made in icing conditions.

There were other inconsistencies in the prescribed procedures. The AFM stated that intentional stalls were to be performed with the autopilot off. However, company maintenance test flight procedures required it be engaged in order to verify autopilot disconnect at stick shaker prior to approving the aircraft for return to service. The AFM also specifically noted that all external airframe surfaces must be free of ice when performing intentional stalls. Afterward, Raytheon issued a stall training syllabus that outlined operational considerations for stall testing and clarified approved recovery procedures. In addition, they discontinued the practice of approaching intentional stalls with the autopilot connected for in-service aircraft until the stall characteristics of the aircraft have been ascertained.

These events lead to the question, “Should NRFO pilots be placed in a situation in which they are flying an aircraft so close to the limits of the aircraft envelope?” The FAA’s Information for Operations #08032, “Non-Routine Flight Operations,” explicitly says the NRFO is not a test flight and the crew are not qualified test pilots. With that said, sometimes the margins in the aircraft envelope can be razor-thin. If so, shouldn’t they receive extra training in the handling issues associated with operations close to the aircraft’s flight envelope, how to detect the deterioration in the sometimes razor-thin margins prior to an excursion beyond the limits of the aircraft envelope, and how to properly recover the aircraft to a stable condition in a deteriorating situation?

One suggested solution would be extra training in the simulator in preparation for flight so close to the margins of the aircraft envelope. However, that has created false impressions in pilots regarding the reaction of the aircraft. The NTSB determined that a contributing cause of an Airborne Express DC-8 accident on Dec. 22, 1996, was the flight training simulator's inadequate fidelity in reproducing the airplane's stall characteristics. Most modern simulators don’t have the fidelity to replicate the aircraft’s handling that close to the edge of the envelope. This has been one of the central issues in the debate over loss-of-control prevention training. Additionally, the Airborne Express example is but one of several in which control techniques learned in the simulator have actually made the situation deteriorate worse in the aircraft.

The NASA Aviation Safety Reporting Systems (ASRS) and NTSB databases have plenty of other important lessons for all involved in post-maintenance flying. Some of you have contributed great reports to the ASRS about the difficulties you encountered during post-maintenance test flights. Your well-written narratives discussed the extra workload, the need for low workload airspace because you are focused on the aircraft, or missing an ATC radio call while you were performing these abnormal test procedures. Any in-depth discussion of the proper training, procedures and risk management required to safely conduct post-maintenance test flights needs to address these important topics.

PS: A Fallacy About Landing Gear 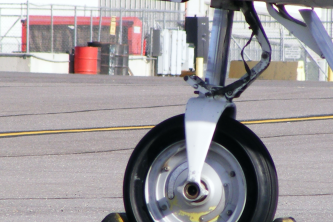 One benefit of being a Non-Routine Flight Operations pilot was the frequent direct contact with maintenance technicians, inspectors and supervisors who were generous with their explanations. A prime example involved the nose strut. Some pilots had the opinion that “nose struts always shimmy…it’s normal.” When I posed this question to a maintenance inspector, he took me out into the hangar to see some dismantled nose-gear sections to explain how they would correct discrepancies. He explained the limitations outlined in the aircraft maintenance manual, and gave me better insight into the proper preflight of the nose gear. By the way, he dispelled the opinion from pilots that the shimmy was normal.