Restored B-29 Superfortress Rolls out of Wichita Hangar 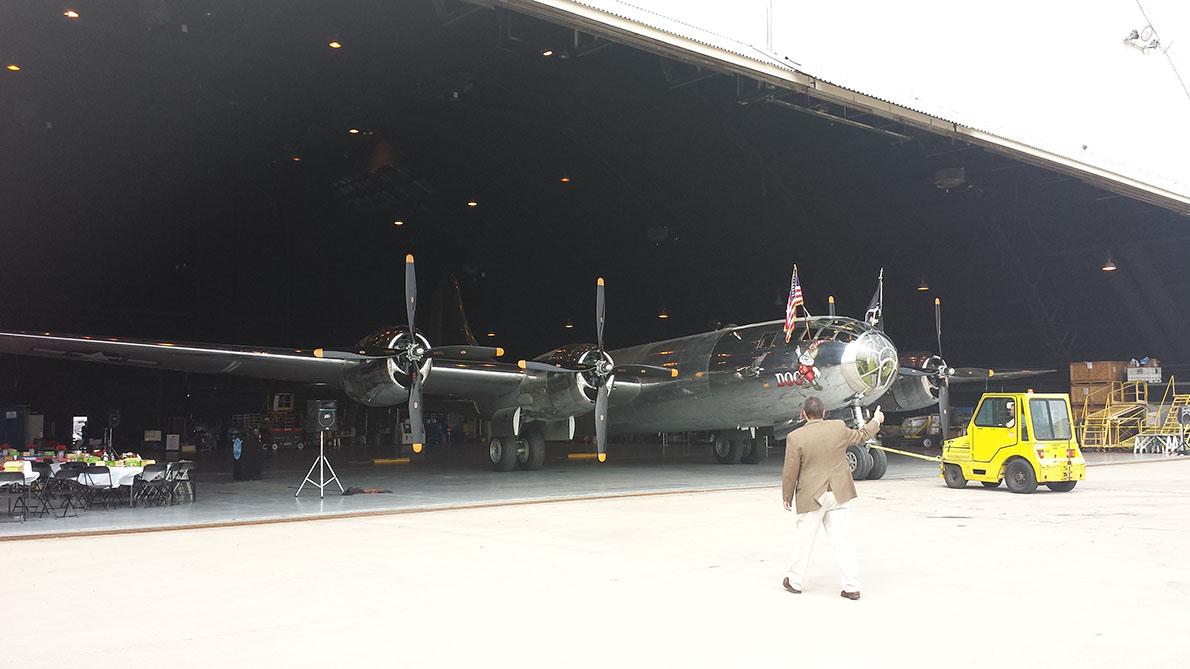 Pulling out "Doc" B-29 Superfortress

The B-29 bomber is rolled out of a Boeing Wichita hangar, nearing the end of a restoration project to return the Superfortress to flying condition. About 200 volunteers and supporters attended the rollout ceremony commemorating the 15-year restoration project to restore the historic 1945 aircraft known as “Doc.” The plane was found in 1987 in a California desert where it had become a sanctuary for birds and other creatures for 40 years. The aircraft was rescued and arrived in Wichita for restoration in 2000. The project hit a long snag due to a poor economy and lack of hangar space. It resumed after a group of Wichita business leaders and aviation enthusiasts formed a nonprofit group called Doc’s Friends.The plane will be restored to flying condition. It is expected to fly later in 2015. 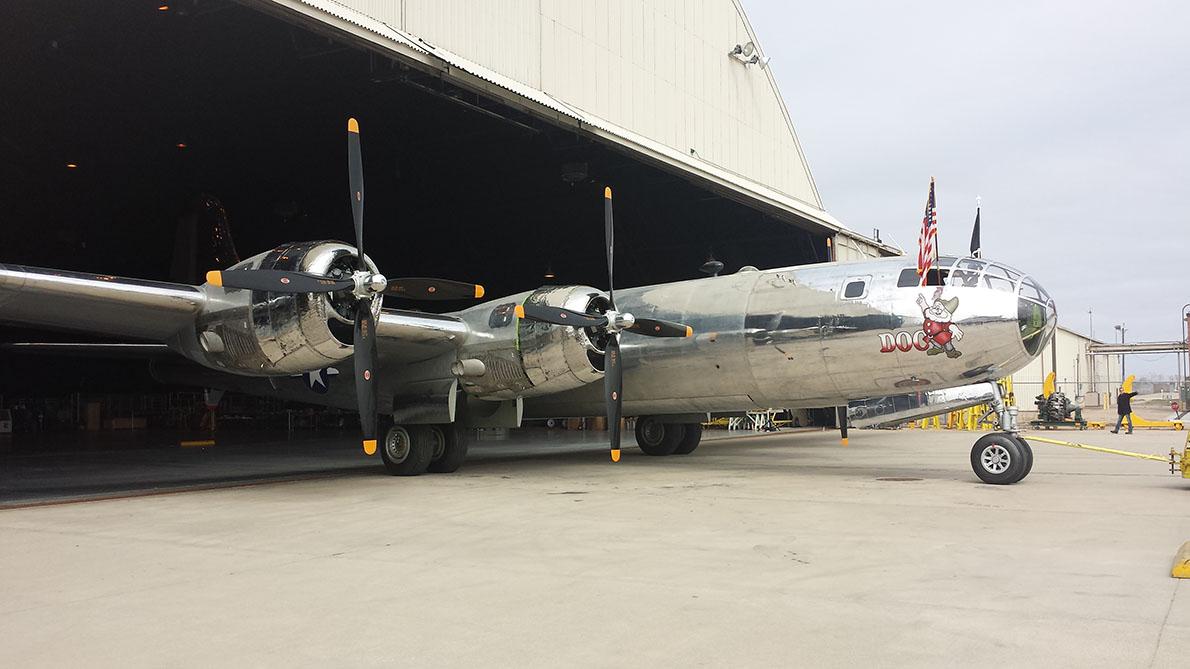 "Doc" B-29 Superfortress Almost Out of the Hangar

Seventy years after the historic B-29 known as “Doc” rolled off the assembly line and was delivered to the Army Air Services, the aircraft was rolled out of a Boeing hangar, following a 15-year restoration project during a ceremony in Wichita. The plane, built in 1945, was one of 1,644 B-29s manufactured in Wichita during World War II. More than 200 volunteers and supporters attended the roll-out ceremony on March 23, 2015. It is on track to fly later in 2015 and will be one of only two B-29s restored to flying condition. 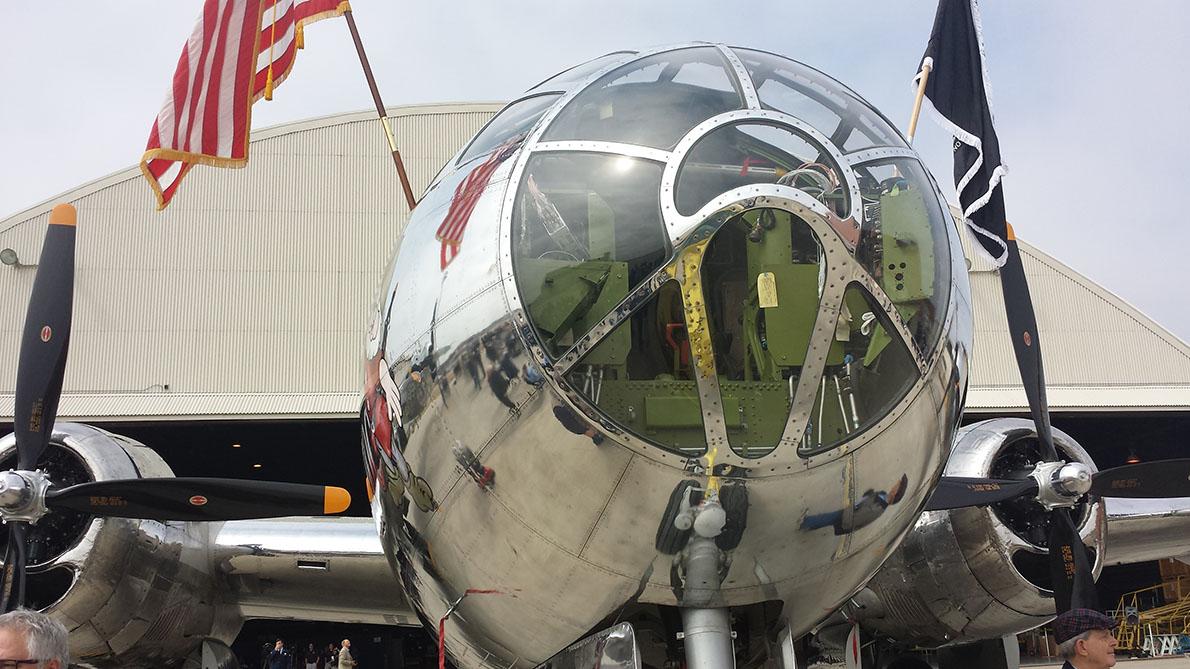 A B-29 Superfortress rolls out of a former Boeing Wichita hangar where it has been undergoing restoration. The aircraft was built in Wichita in 1945 and delivered to the U.S. Army Air Forces, where it flew at the end of World War II and in the Korean War. It sat in a California desert for 40 years before being rescued. It will be one of only two restored B-29s in flyable condition. 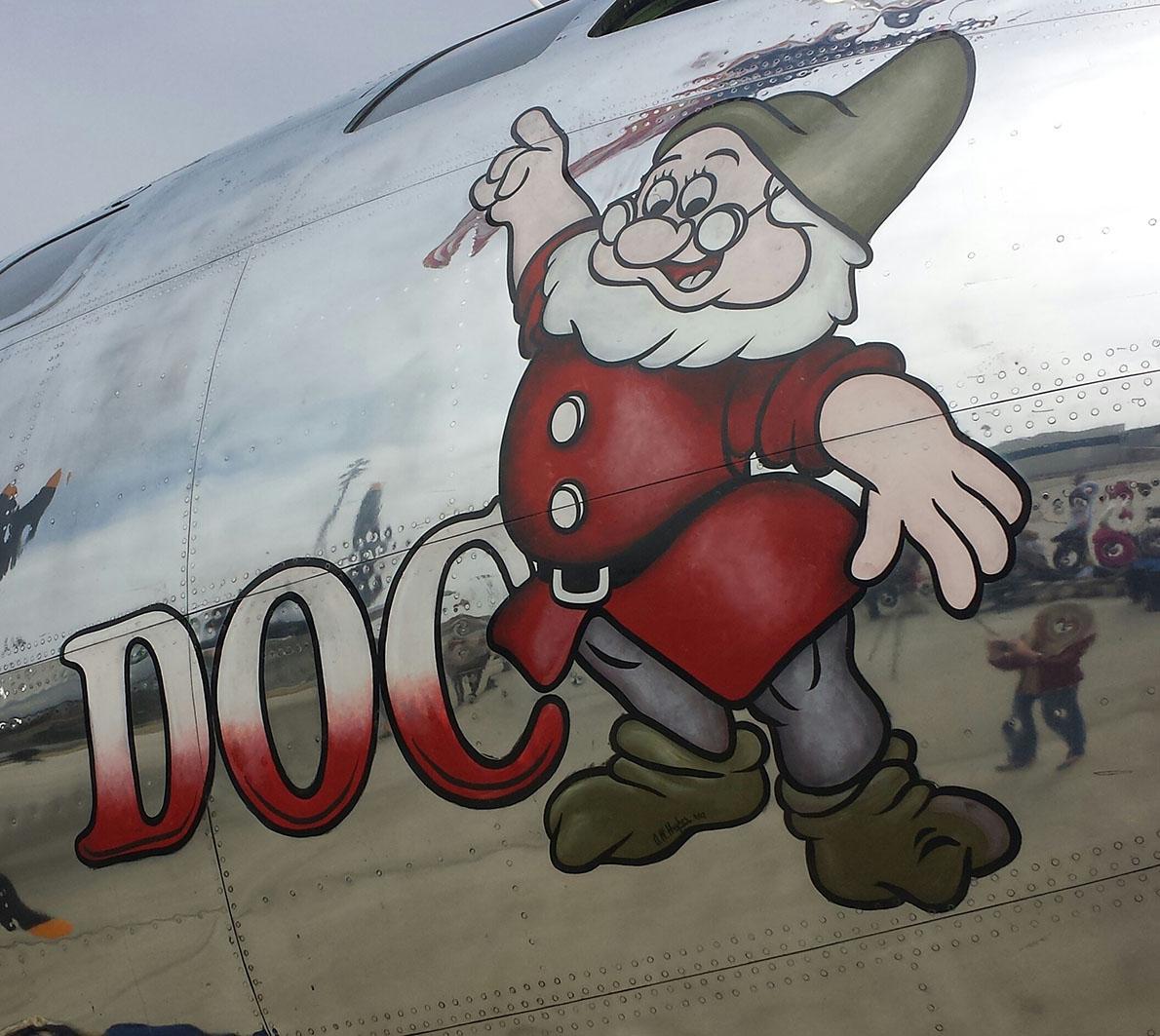 The B-29 Superfortress was one of a squadron of eight planes named for Snow White and the Seven Dwarfs. This one is known as “Doc.” The aircraft was built in 1945 by Boeing in Wichita. The Wichita plant built 1,644 B-29s and about 125 additional B-29s in equivalent spare parts. That was nearly 65 percent of the total number of B-29s built by Boeing plants in Wichita and in Renton, Wash. 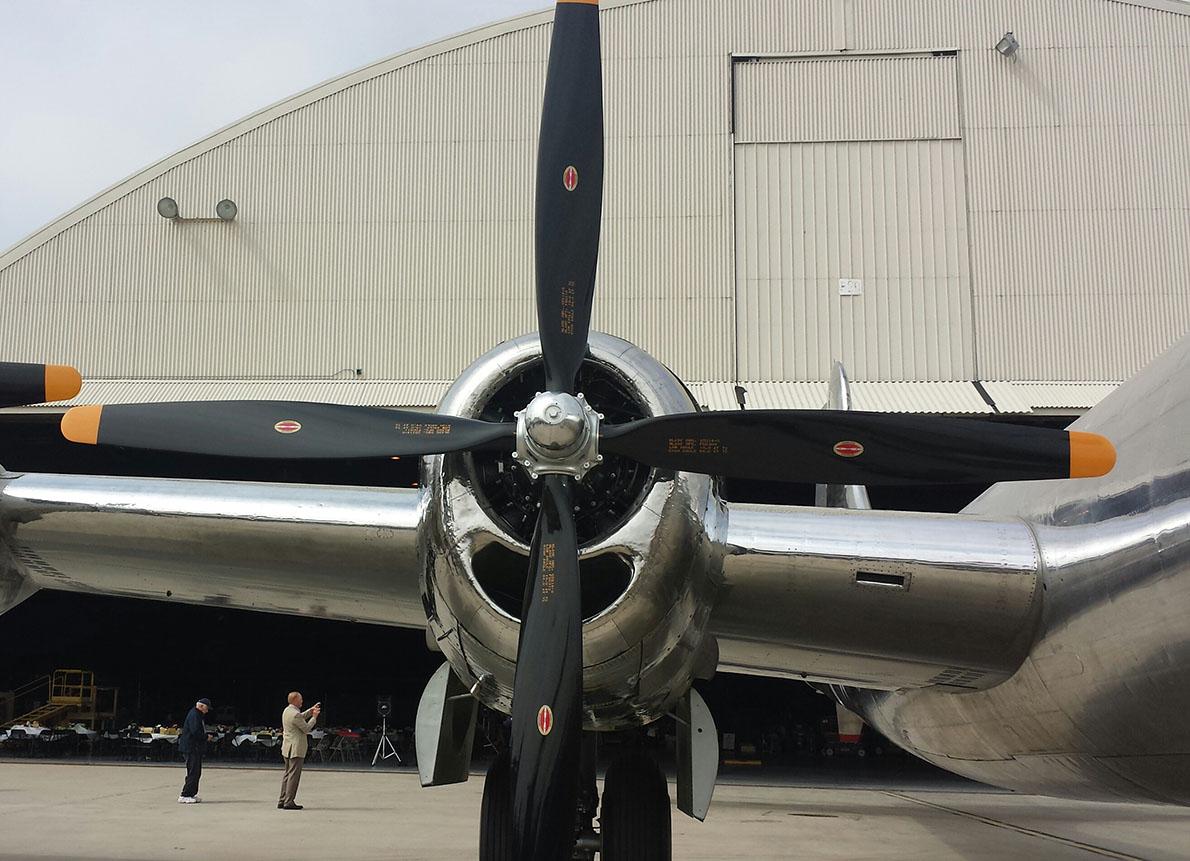 About 200 volunteers and supporters turned out March 23, 2015, to celebrate the rollout of the B-29 Superfortress known as “Doc.” The plane is being restored to flying condition. The avionics are being installed, and taxi tests are being performed before flying for the first time. 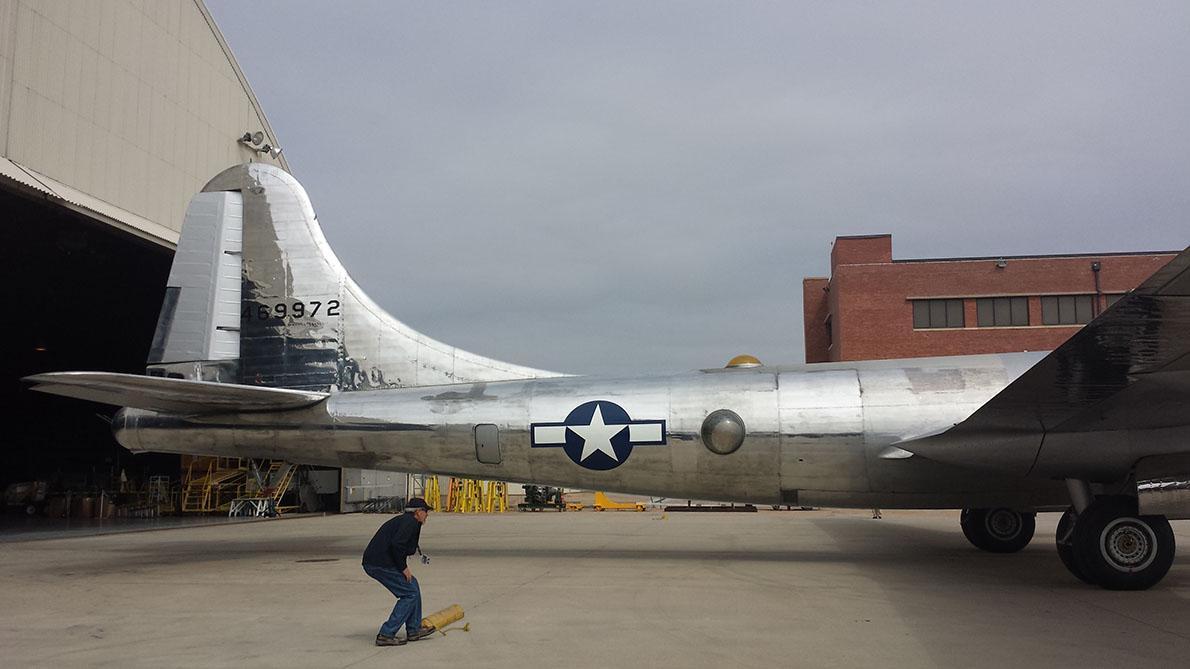 "Doc" B-29 Superfortress Tail Rolls out of Hangar

After 15 years undergoing restoration, a B-29 Superfortress was rolled out of a former Boeing hangar in Wichita on March 23, 2015. Volunteers have put in more than 300,000 hours restoring the aircraft. Organizers say it will fly soon. The avionics are being installed, and taxi testing must be done before first flight. The aircraft was built in 1945 in Wichita. 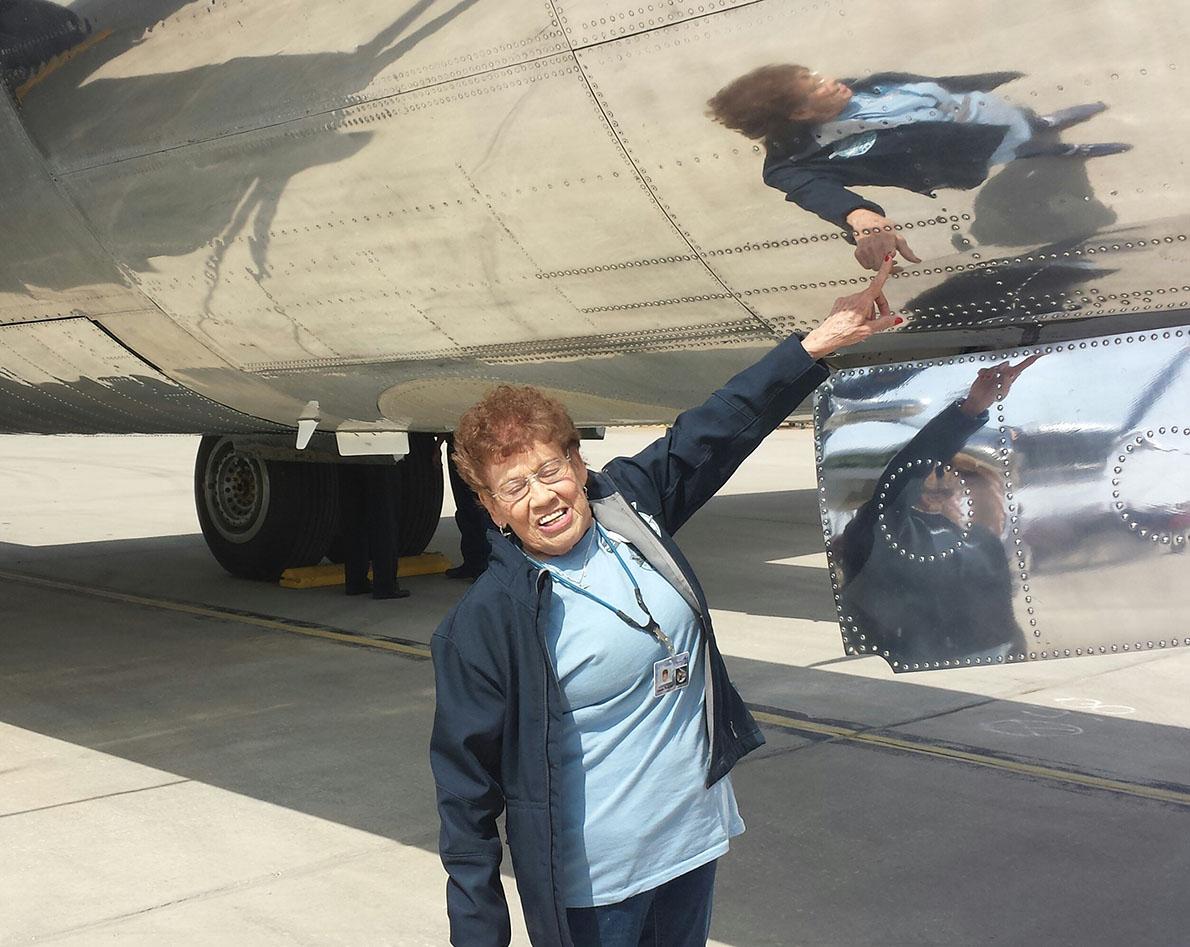 At age 18, Connie Palacioz began at Boeing Wichita riveting B-29 nose sections, including the B-29 known as “Doc” now undergoing restoration into flyable condition. Palacioz, now 90, points to the rivets she put in the B-29 70 years ago. Her original rivets are still there. She has been working as a volunteer on the restoration project. 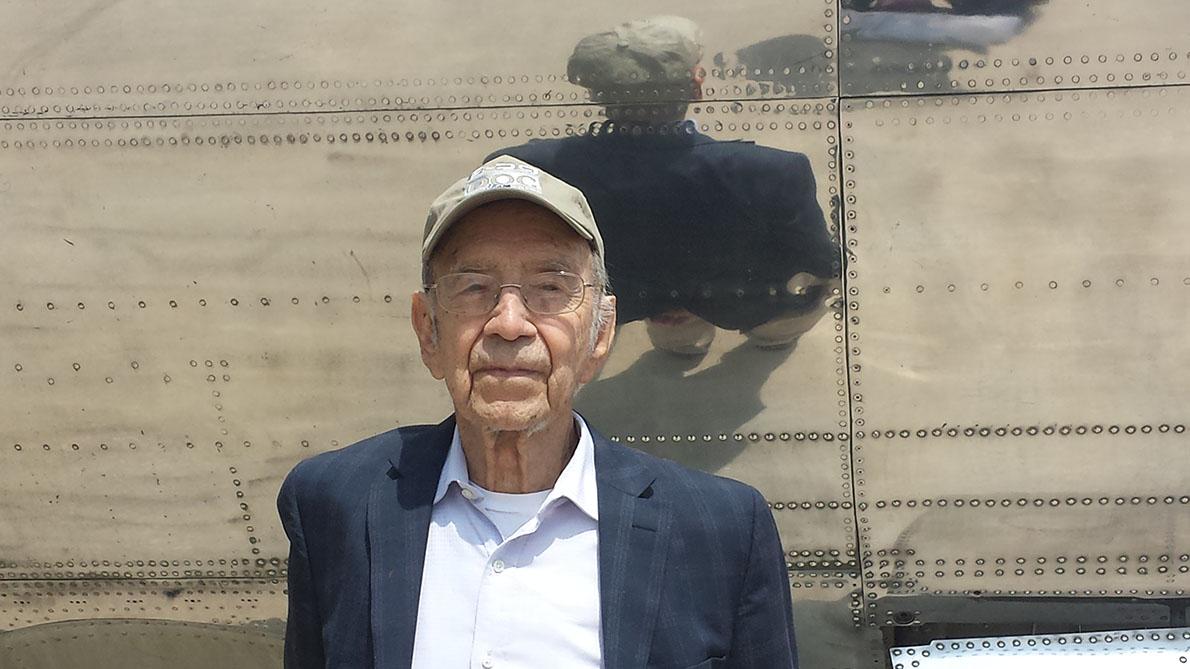 Jim Marshall, 91, flew 31 missions on a B-29 during World War II and earned the Distinguished Flying Cross. Marshall, who grew up in Redding, Kan., served as a radio operator on a B-29 known as “Honey.” He flew his first mission over Tokyo on Nov. 24, 1944, and the last one on June 17, 1945. On one mission after a long flight, they returned with just enough fuel to make it to the runway. The aircraft did not have enough fuel to make it off the runway, however, and had to be towed. Marshall attended a rollout ceremony for "Doc," a B-29 undergoing restoration in Wichita. 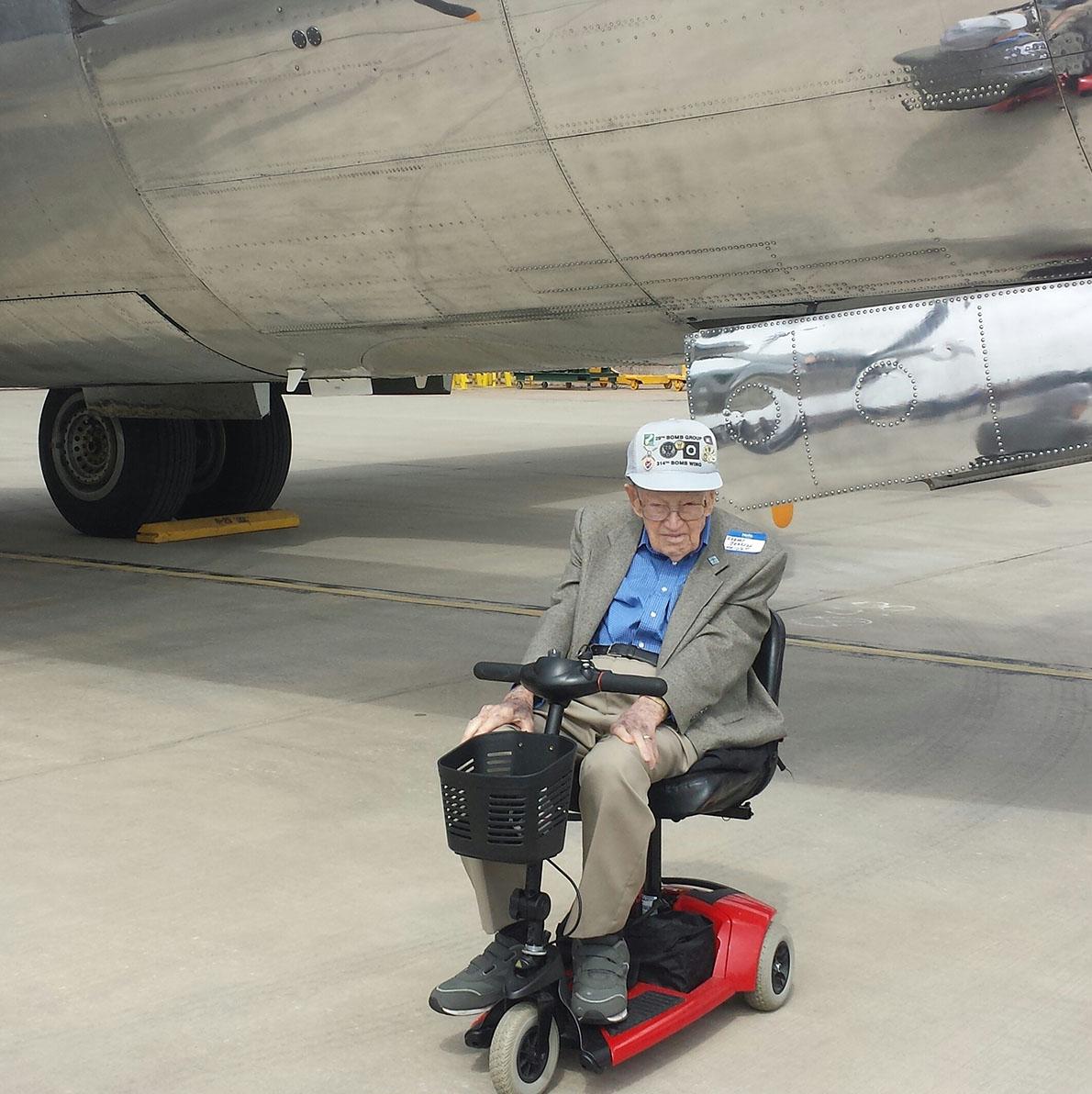 Robert Pearson flew 32 missions on B-29s during World War II, serving as a flight engineer. Pearson attended a rollout ceremony March 23, 2015, for a B-29 Superfortress undergoing restoration inside a hangar in Wichita. The aircraft was built in Wichita in 1945 and decommissioned in 1956. It will be one of only two B-29s restored to flying condition. 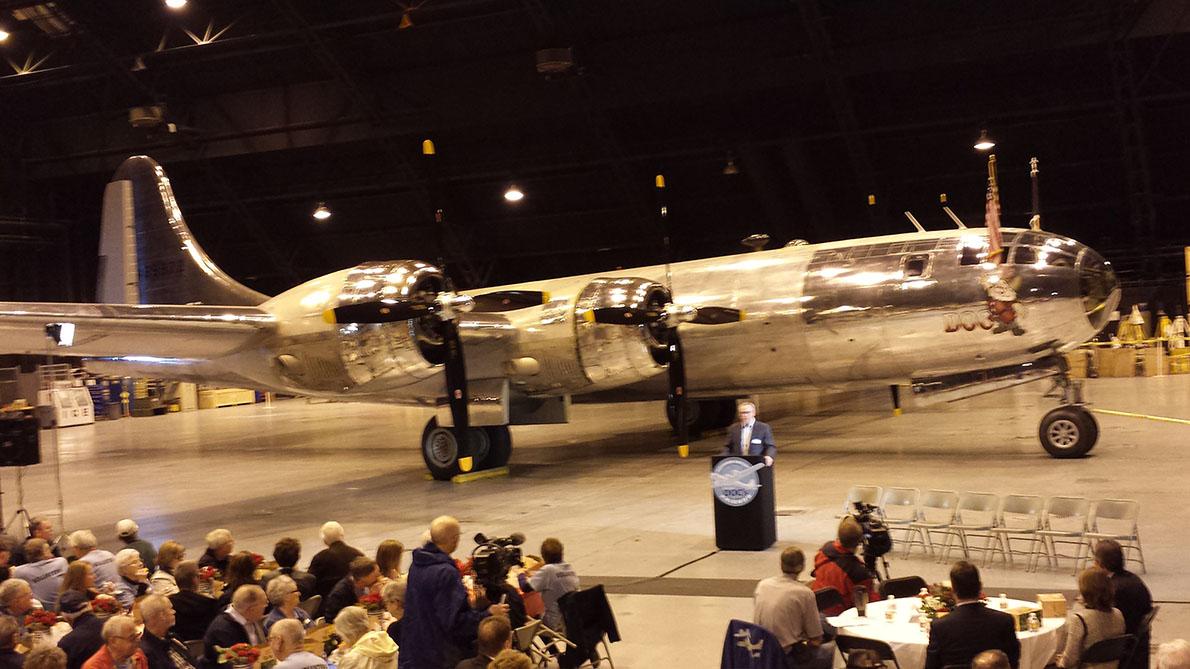 About 200 volunteers, supporters and media turned out March 23, 2015, for the rollout ceremony for a B-29 Superfortress known as “Doc.” The aircraft was discovered in the California Mojave desert where it had served as a ballistic target on a China Lake Naval Air Warfare Center Weapons range. It was rescued and arrived in Wichita to be restored to flyable condition in 2000. Jeff Turner, chairman of Doc’s Friends, addresses those attending the event. The project is divided into three phases, including completing the restoration and getting the aircraft flying again, securing a permanent home for the aircraft in Wichita, and operating it as a flying museum. Another $7 million to $9 million is needed to finish the project, including to secure a permanent hangar. 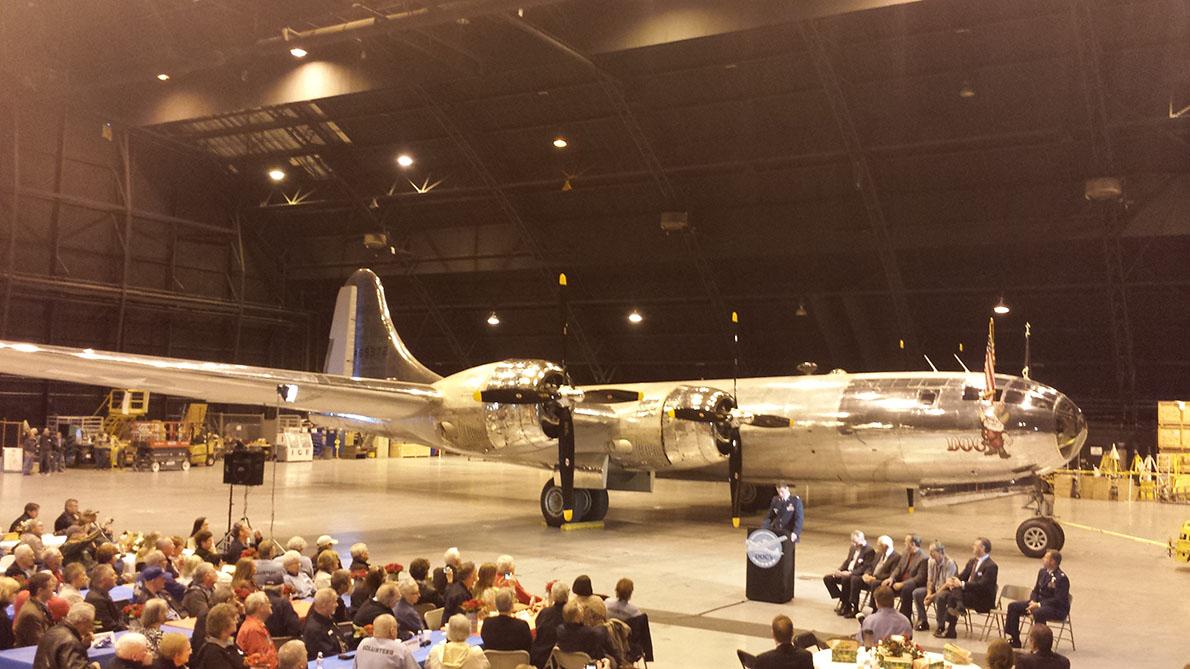 Col. James Dermer, vice commander of the 22nd Air Refueling Wing at McConnell Air Force Base, addresses those gathered for a rollout ceremony for the B-29 heavy bomber known as “Doc.” Doc represents the sacrifices of the greatest generation, “to whom all Americans owe their freedom,” Dermer said. The B-29 has been undergoing restoration. 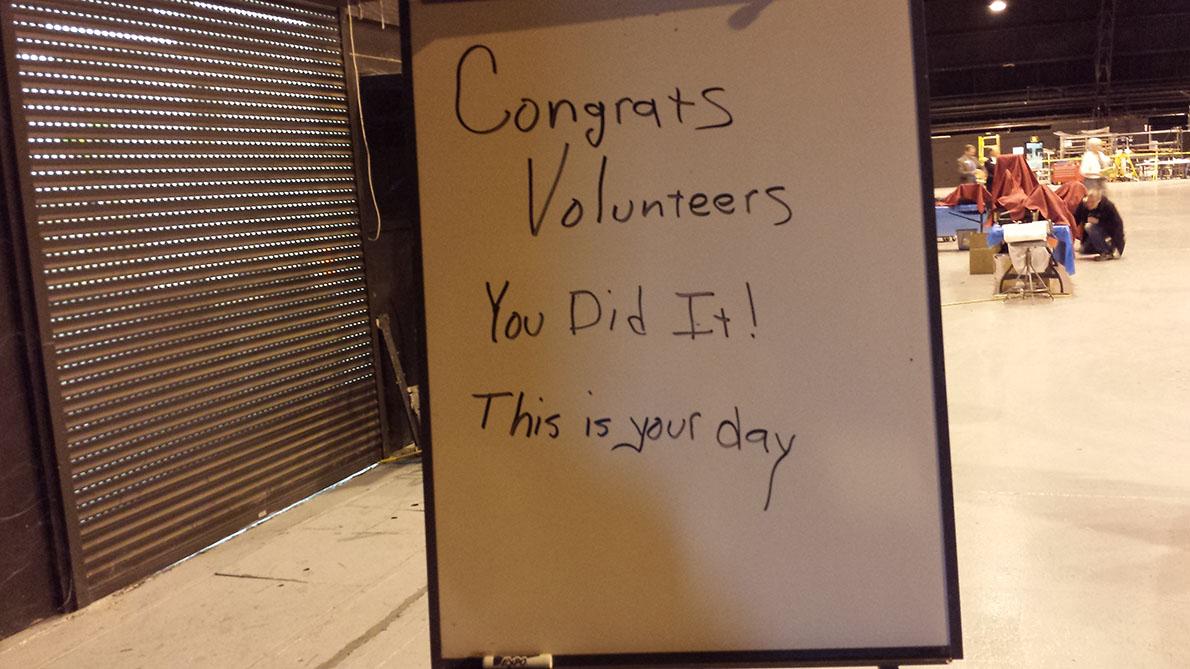 Hundreds of volunteers have worked more than 300,000 hours to restore a World War II B-29 Superfortress in Wichita. Countless individuals and organizations have made financial and in-kind donations to keep the restoration project moving. The project is divided into three phases: complete the restoration and get “Doc” flying again, secure a permanent home for the aircraft, and operate it as a flying museum.

The bomber, built by Boeing in Wichita in 1945, had been parked in the California Mojave desert for 42 years. The aircraft was discovered in 1987 and, in 2000, was trucked to Wichita where restoration began. The project went through a hiatus, the victim of a poor economy and lack of hangar space, when a group of Wichita business leaders and aviation enthusiasts formed a nonprofit group called Doc’s Friends and restarted the restoration. Boeing donated the hangar space.

The plan is to restore the aircraft to flying condition, and it will be one of only two to be flyable. Doc is expected to fly in the next couple of months. The next step is to secure a permanent home in Wichita for the aircraft and to operate the B-29 as a flying museum. Organizers estimate it will take another $7 million to $9 million to finish restoration and secure permanent hangar space.

All photos by Molly McMillin.