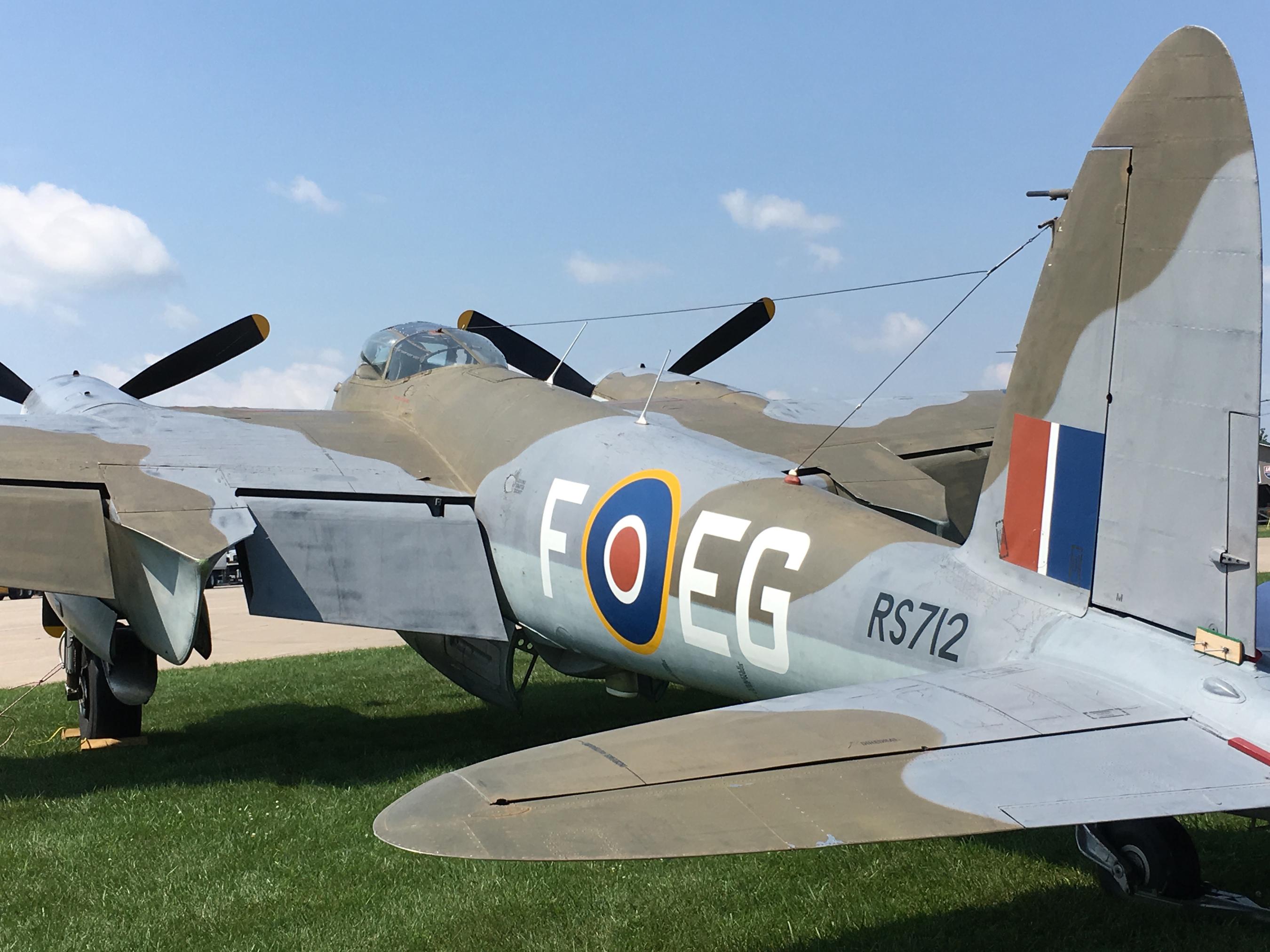 The de Havilland DH.98 Mosquito caused a sensation in the UK when proposed as an all-wooden, high-speed unarmed bomber. It overcame official opposition to become one of the most successful fighter/bomber/reconnaisance aircraft of WWII. 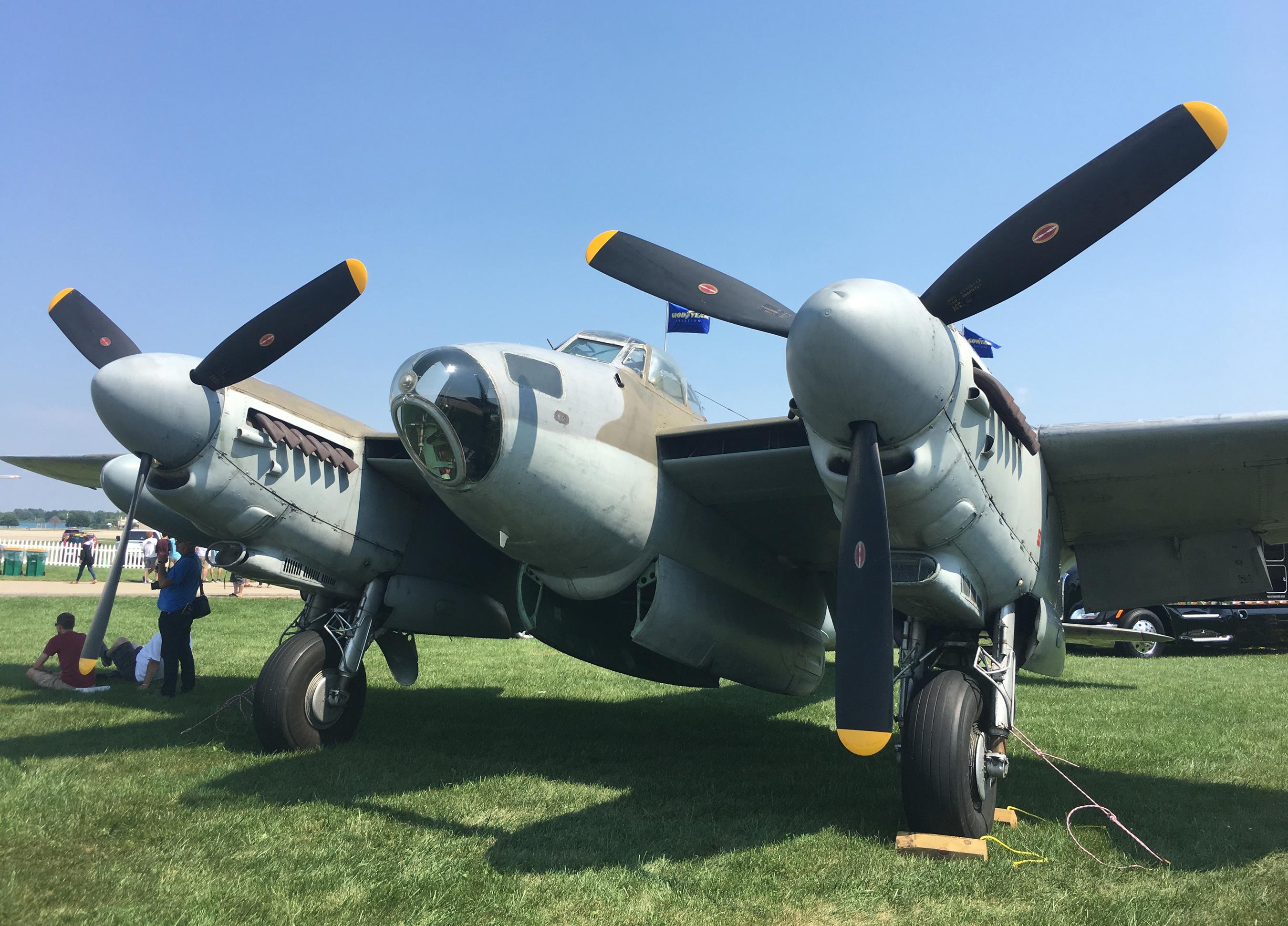 Powered by two Rolls-Royce Merlin V-12 piston engines, the Mosquito could achieve a maximum speed of 415 mph. It could carry a bomb load of up to 4,000 lb. 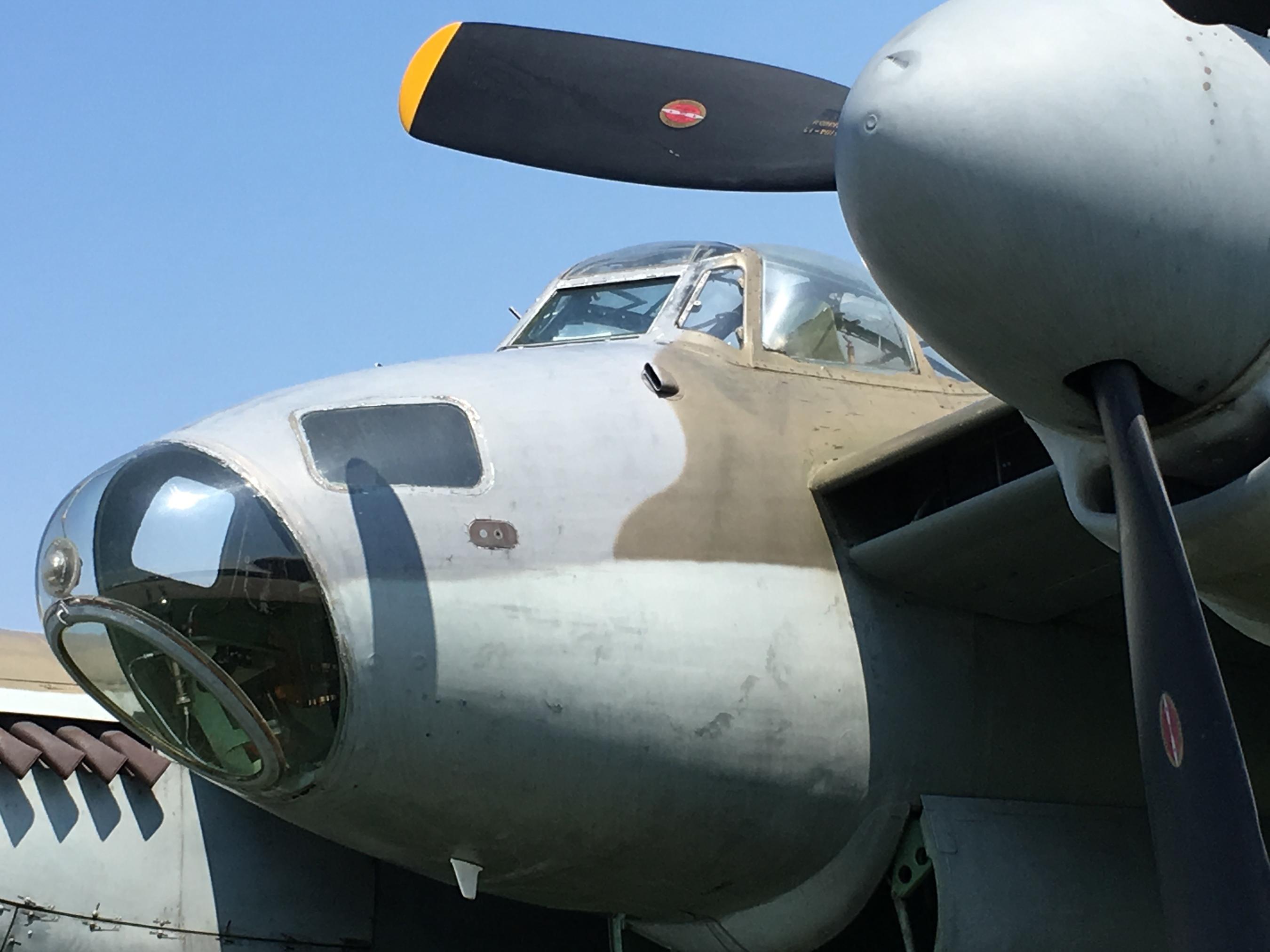 From Bomber to Trainer

The Mosquito in the EAA AirVenture Museum was built as a B.35 but later converted to a TT.35 and is on long-term loan from the collection of Kermit Weeks, which acquired the aircraft in 1981. 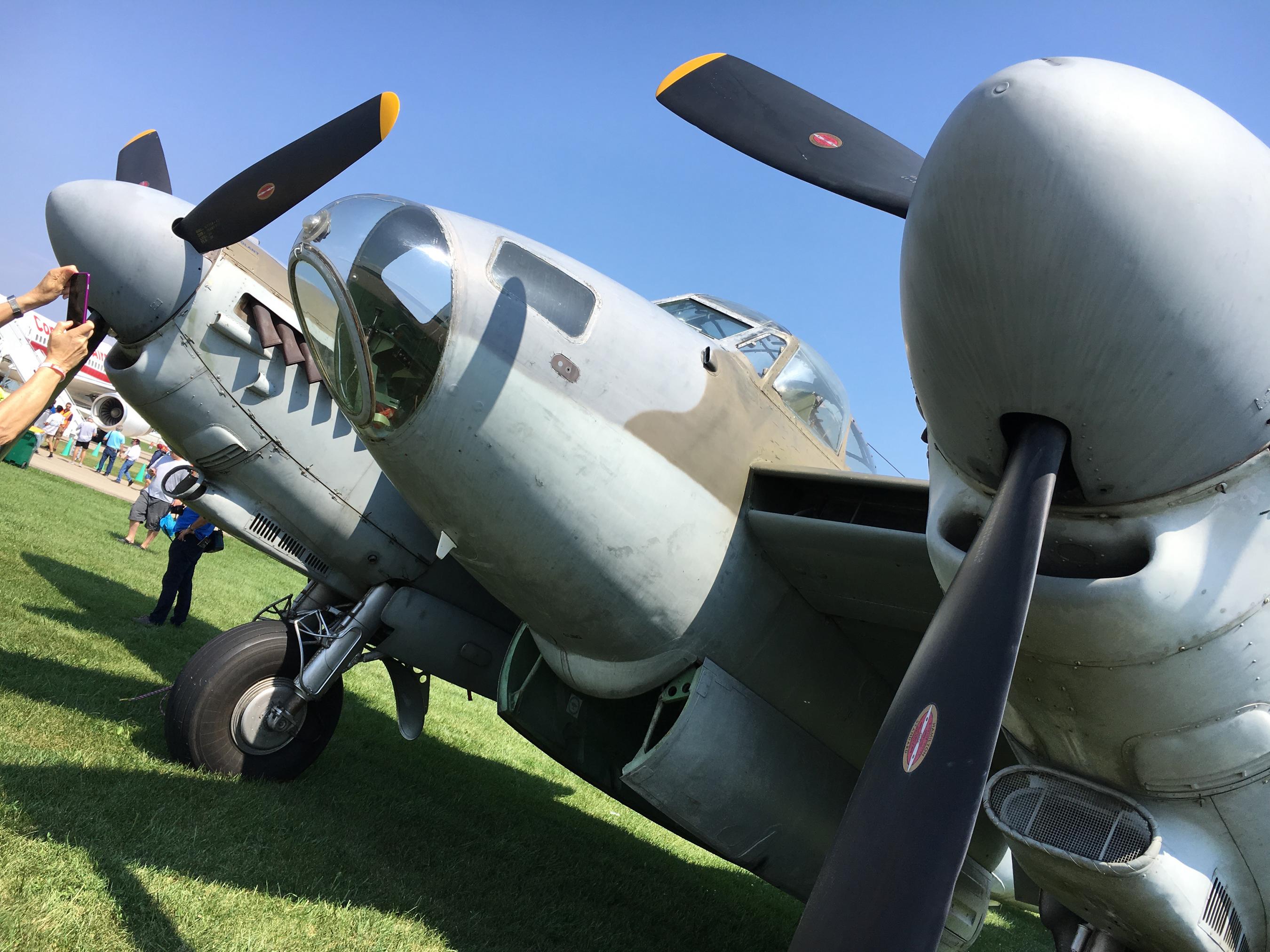 Before it came to the U.S., the Mosquito (officially on the British civil register as G-ASKB) was one of the stars of the movie 633 Squadron, in which it appeared as RF580/HT-F. 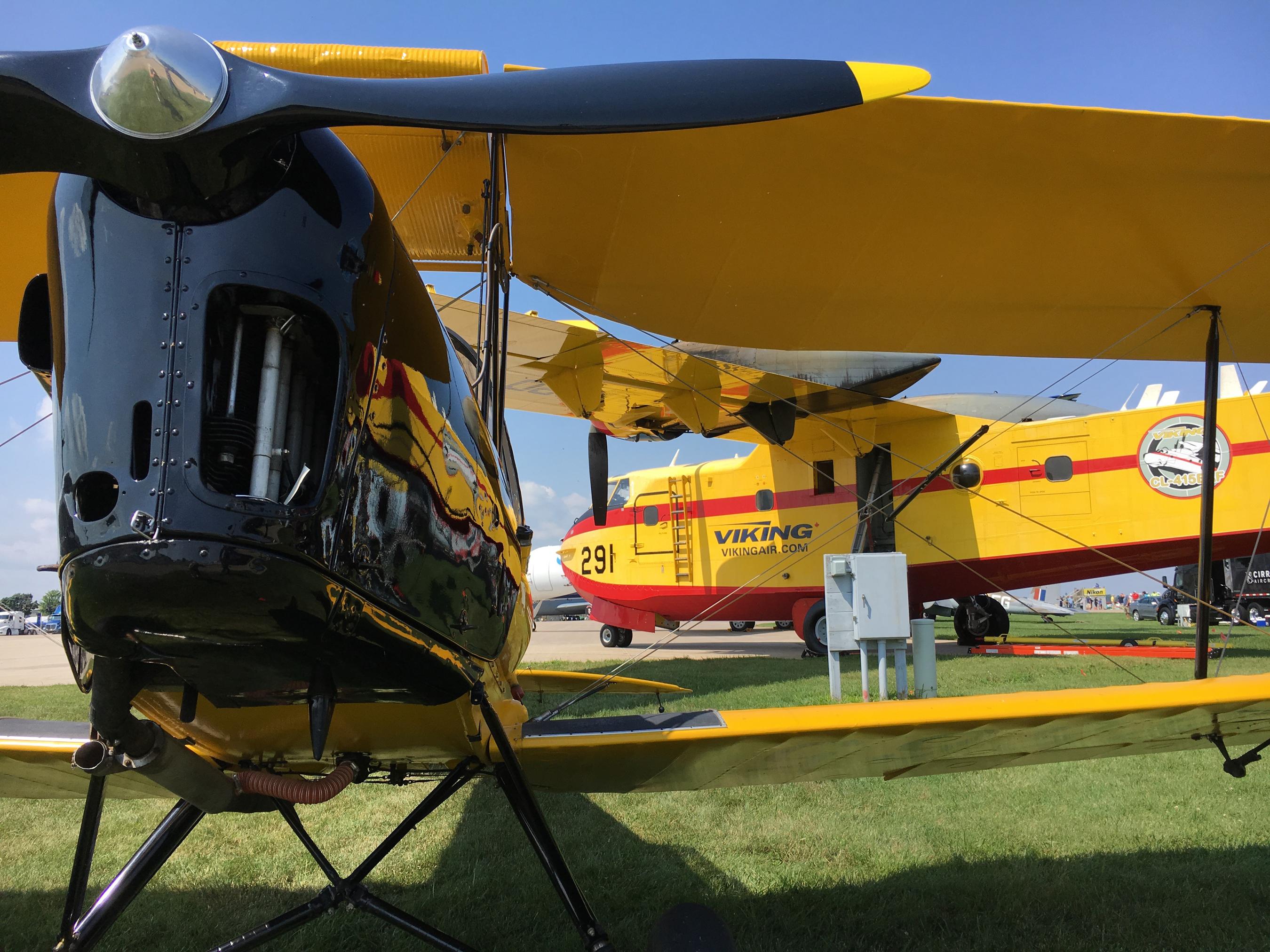 The de Havilland DH.82 Tiger Moth trained most of the beginning pilots in the British and Commonwealth air forces during World War II and soldiered on long afterward. Here the EAA AirVenture Museum’s Canadian-modified DH.82C is parked at Oshkosh in front of a Canadair (Bombardier and now Viking) CJ-215 water bomber. 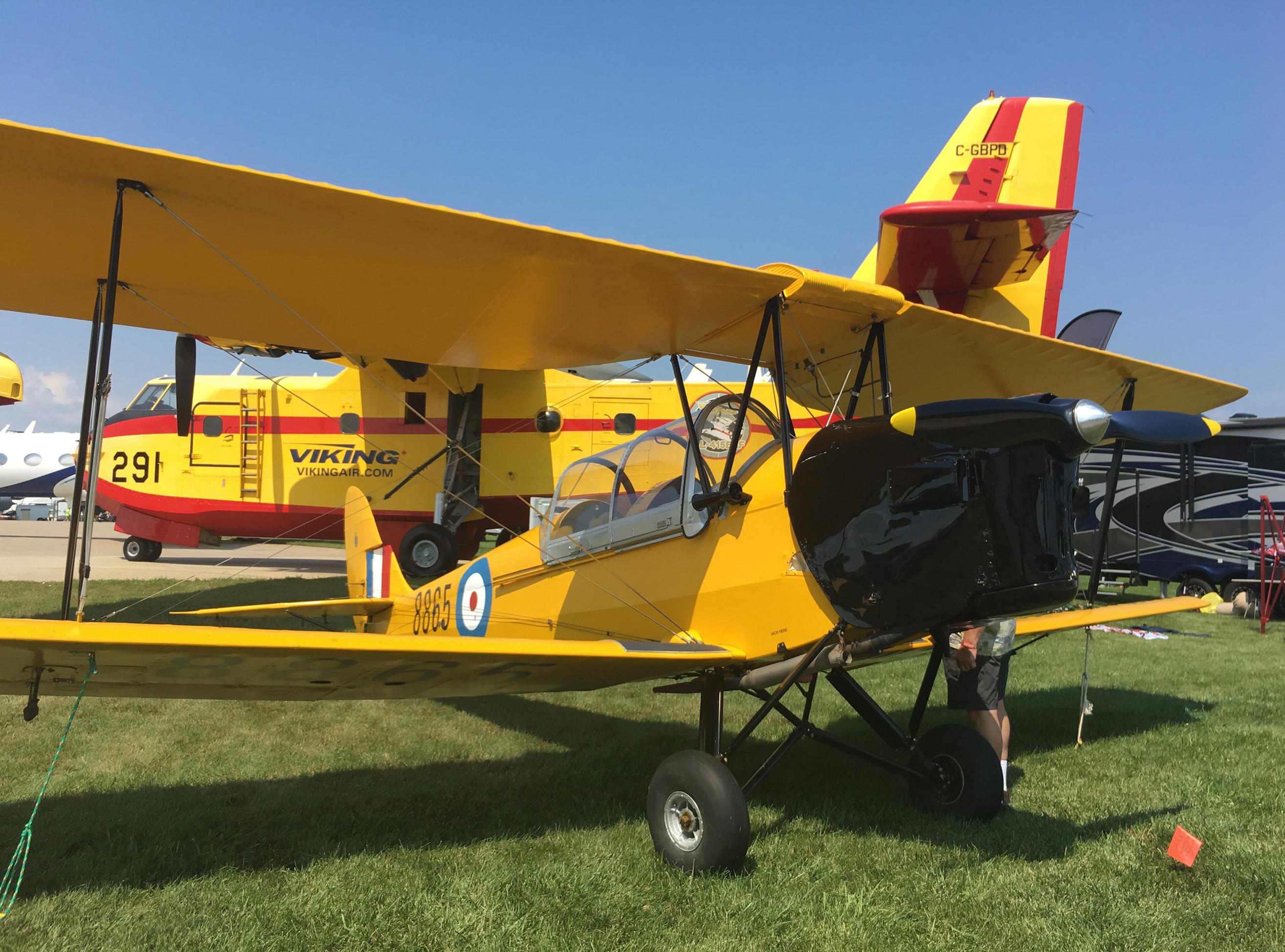 The Tiger Moth and Viking CL-215 water bomber pose at Oshkosh. The Tiger Moth was donated to the EAA Museum in 1964 by Royal Canadian Air Force Chaplin Fr. John MacGillivray. 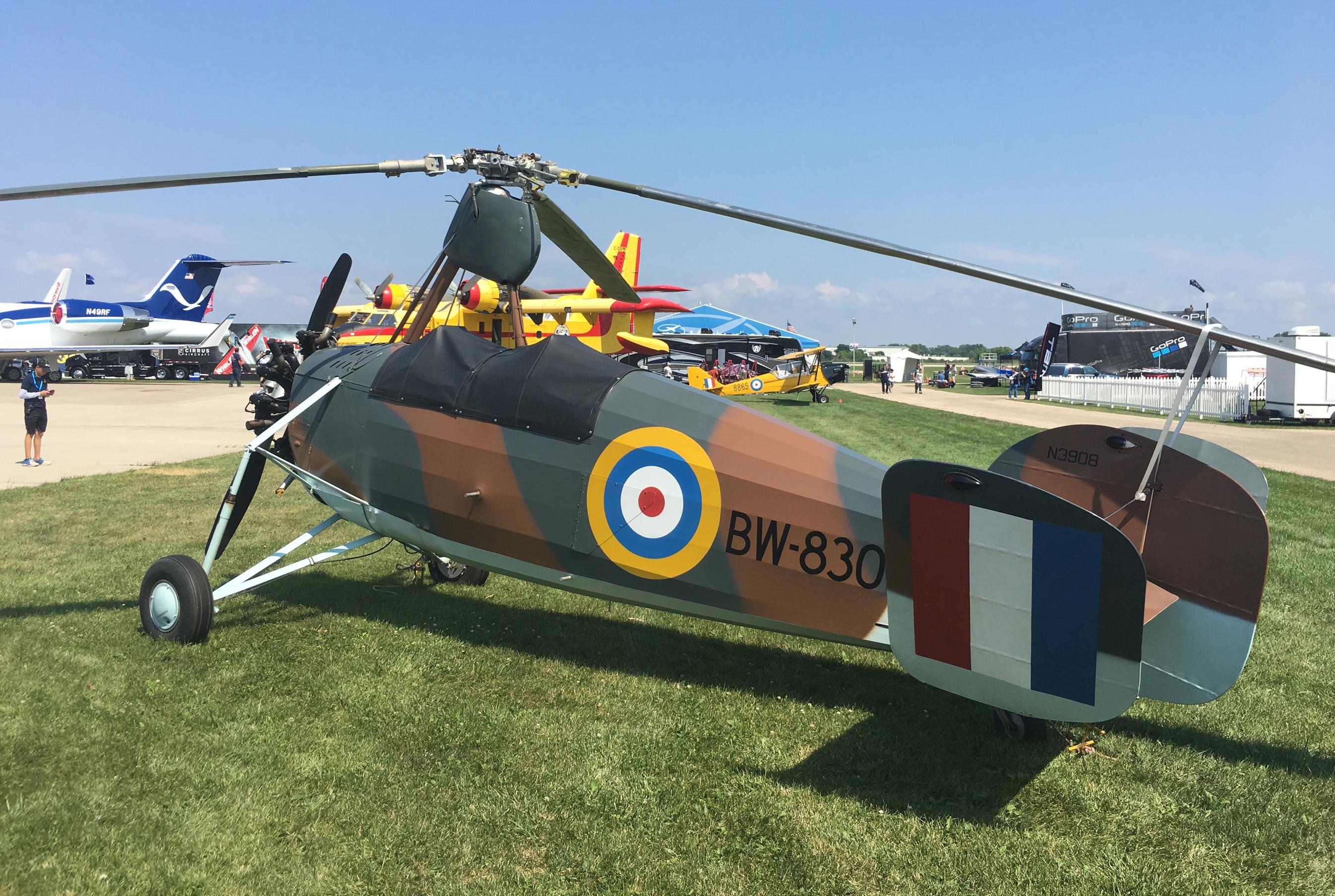 The Pitcairn-Cierva Autogiro Co. and its subsequent companies produced several different aircraft types until their dissolution in 1948. A handful of Autogiros were intended for military use, including the PA-39. Only seven PA-39s were built, for the British Air Ministry, and the EAA Museum’s 1941 example is believed to be the only survivor of that model anywhere in the world. 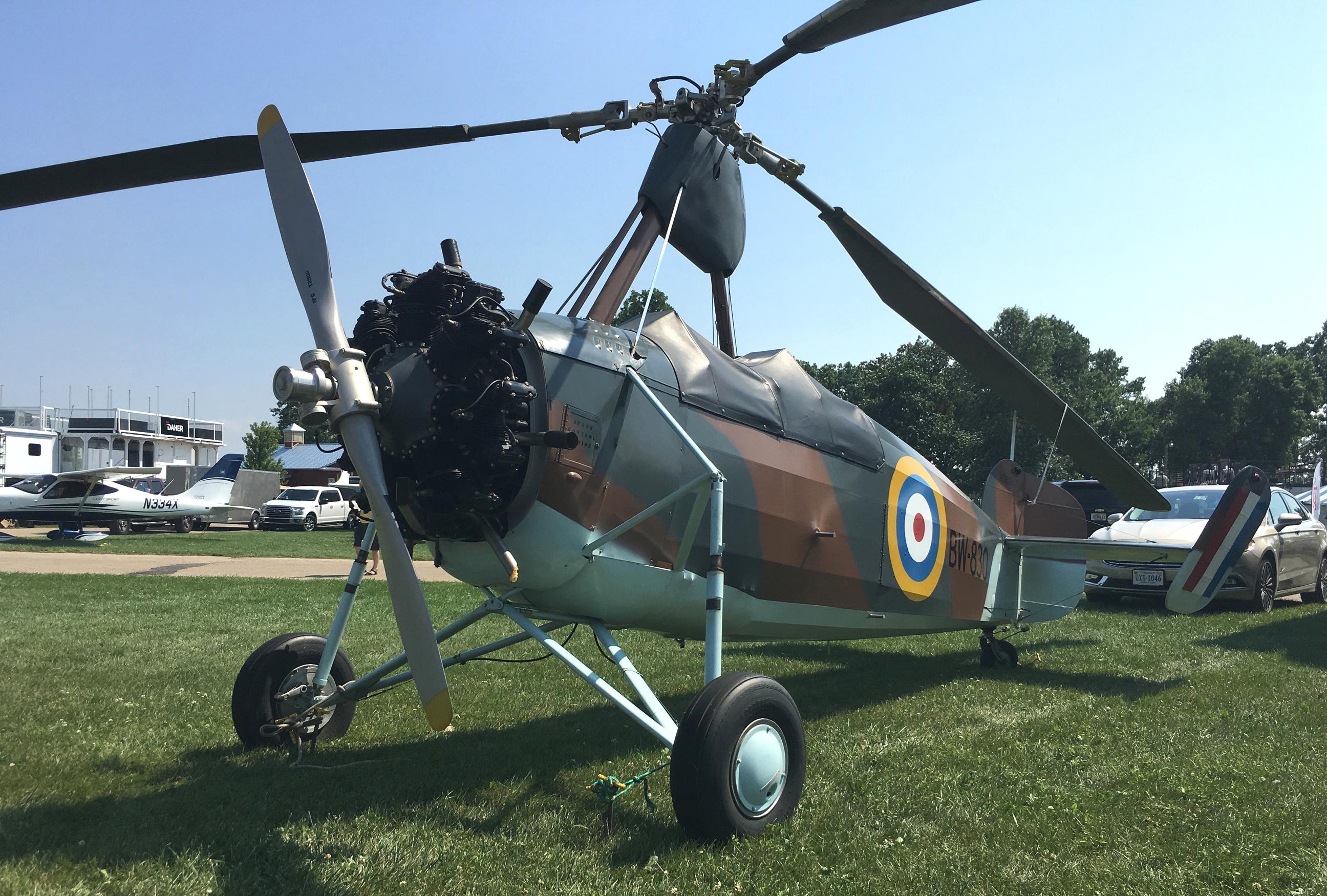 It’s Autogiro With a Capital ‘A’

In 1929, legendary aircraft designer Harold Pitcairn partnered with de la Cierva to build Autogiros under license in the U.S. While all aircraft of the type are autogyros, those built under de la Cierva’s license are Autogiros. 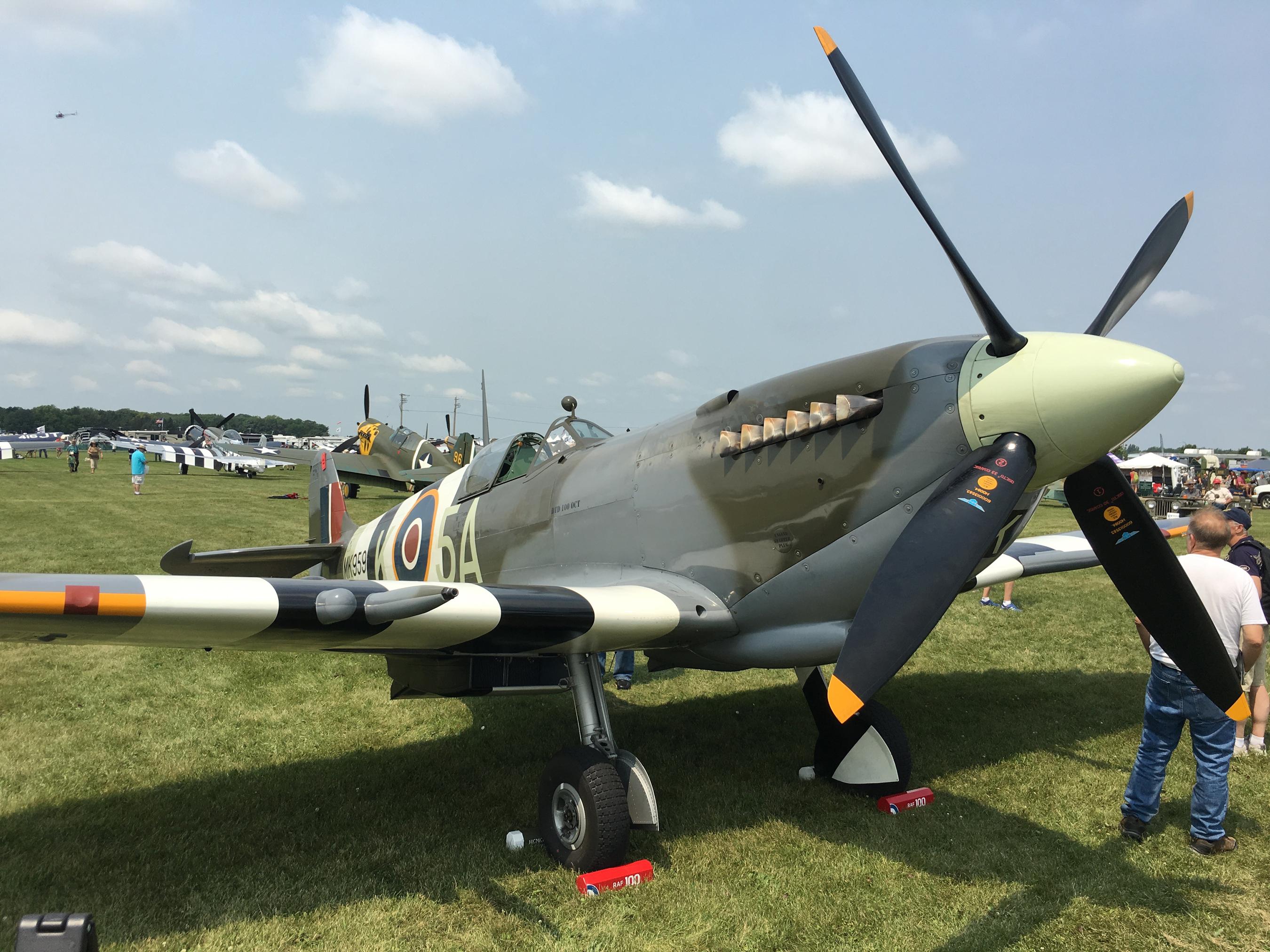 One of the Few

Spitfire Mk.IX MK959 spent many years on top of a pole in Holland before being rescued and subsequently restored, making its “new” first flight in 2004. It is now owned and flown by the Texas Flying Legends Museum. 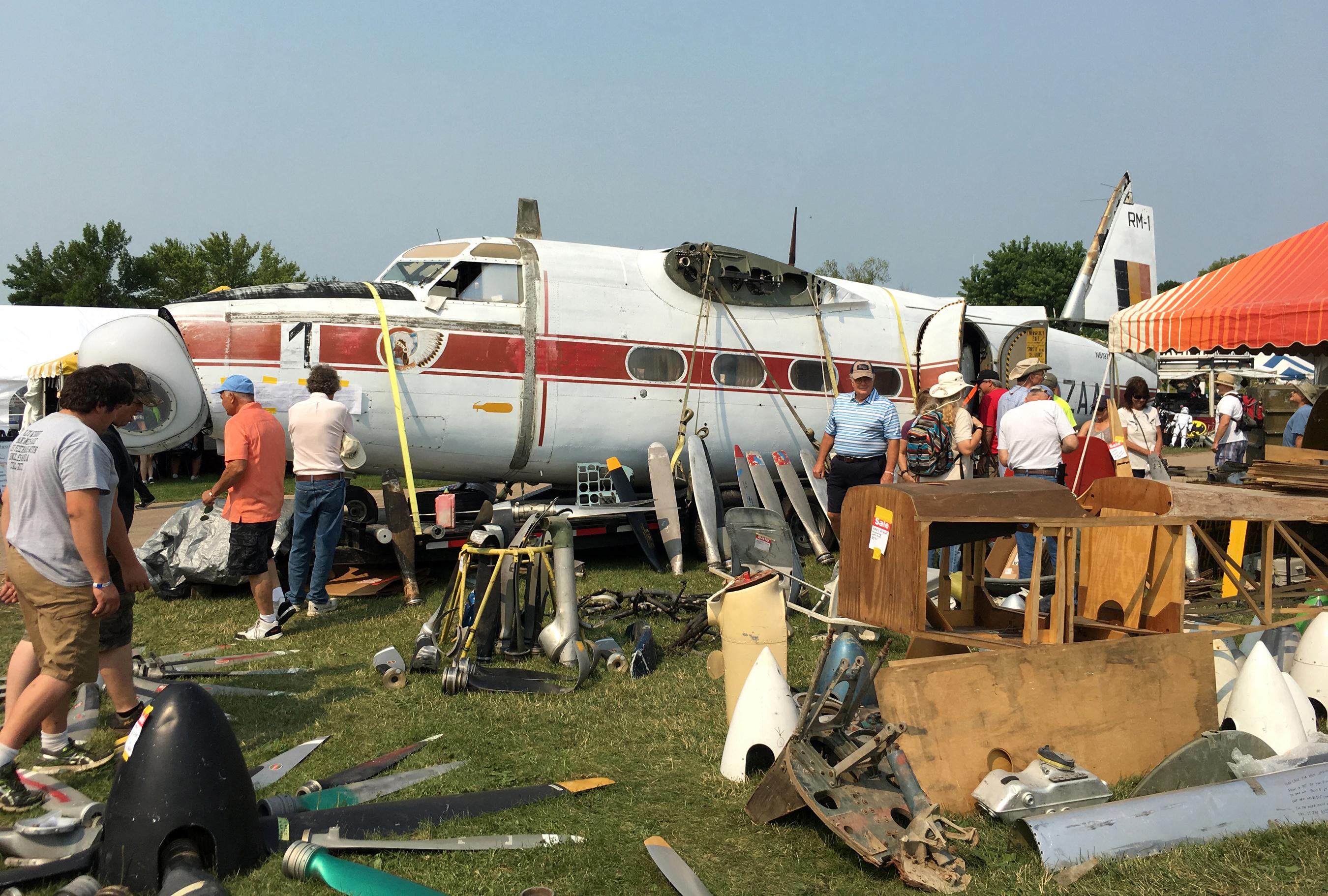 Not many people’s idea of a warbird, the Percival Pembroke communications aircraft never proved popular in civil life after demob from the services. This one, ex-Belgian air force, is believed to be one of only three in the U.S. And yes, it’s for sale. As is.

Many had high hopes for a gathering of British warbirds at EAA AirVenture to mark the 100th Anniversary of the Royal Air Force. And many had hoped for a special turnout of restored RAF/RCAF aircraft from Canada, such as the Avro Lancaster bomber and Fairey Swordfish naval attack biplane that have visited Oshkosh in the past. But poor weather and other circumstances kept them away, at least through Tuesday, July 24.

Instead, the RAF was represented by the EAA Museum’s non-flying Mosquito and Pitcairn Autogyro, a smattering of Chipmunks on the flight line, a Canadian Tiger Moth and several T-6 trainers and Harvards in RAF and RCAF colors. A couple of Jet Provost trainers could also be seen. At least a pair of Spitfires graced the grounds.

A planned display of early British jets, including a Meteor T.7, was canceled after the death of leading jet collector Martin Tibbitts in a British Venom at Sheboygan, Wisconsin, while preparing for AirVenture.